Not only are elm trees excellent at providing shade, but they are also a source of food for wildlife. Most species of elm have similar physical traits and thrive in similar conditions. Despite this, there are ways to differentiate the different types of elms.

For those wondering about the differences between the slippery elm and the American elm, you're in luck. We've done the research and can tell you more about these trees!

Both the American and slippery elm have dark gray bark. However, slippery elm tends to have furrows with reddish-brown bark. The inner bark is slimy and can be used as medicine.

The bark on slippery elm trees is also hairy as opposed to smooth. This species of elm also has the appearance of dark brown to black or red fuzzy buds. 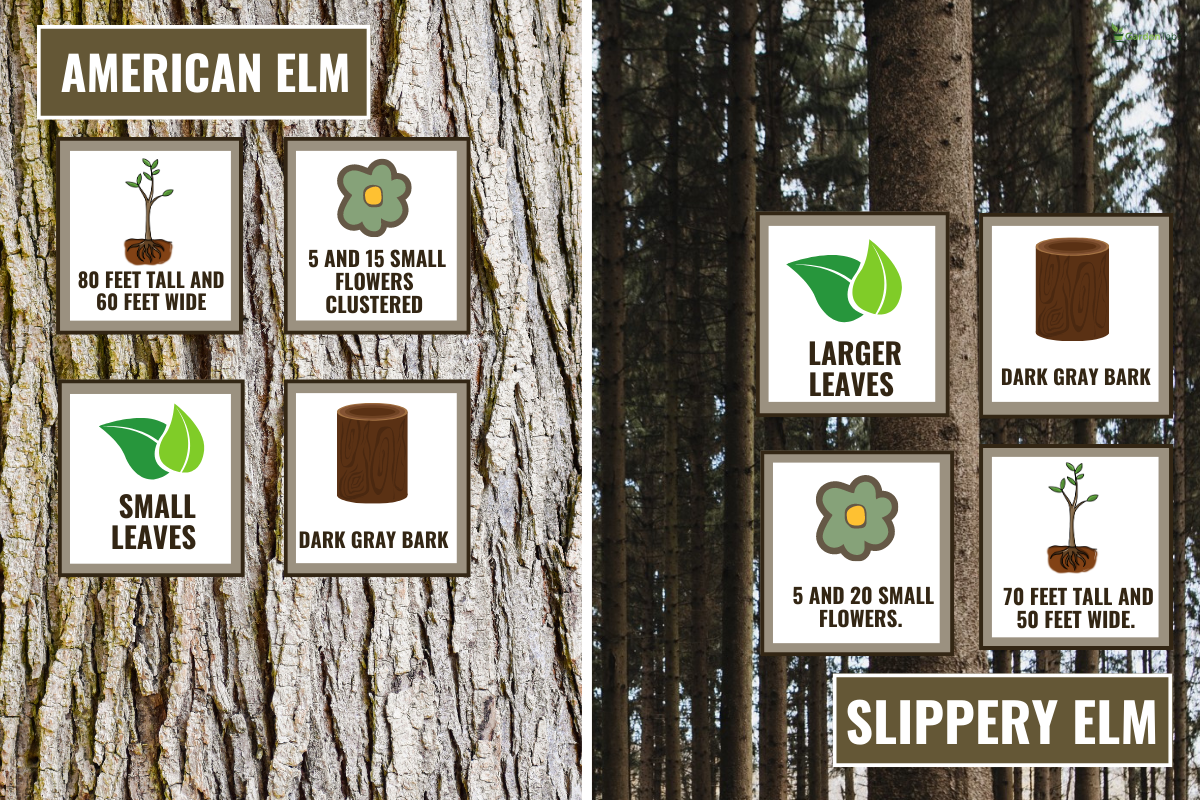 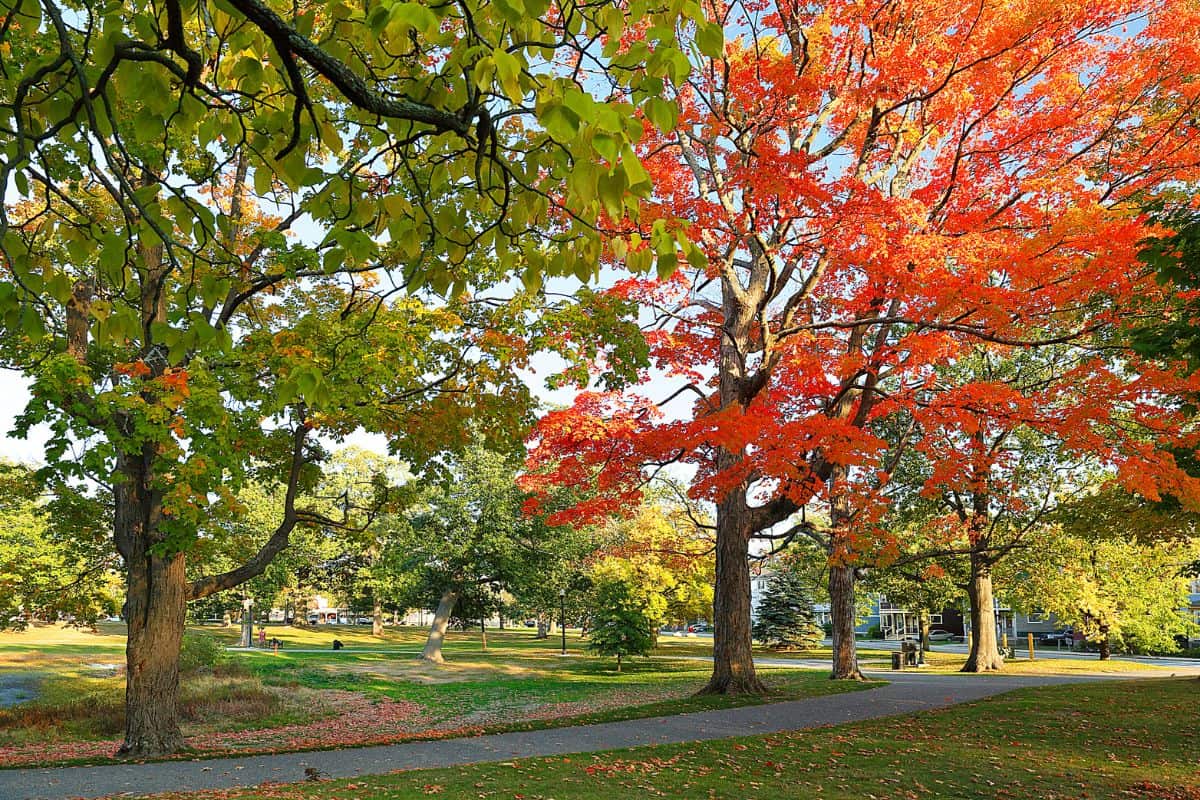 Some of the most apparent differences between the slippery elm and the American elm are their height and shape. American elms are larger and wider. This tree species will grow between 60 and 80 feet tall and 30 and 60 feet wide.

Slippery elms will grow between 40 and 70 feet tall and 30 and 50 feet wide. On some occasions, this elm species have reached up to 100 feet. 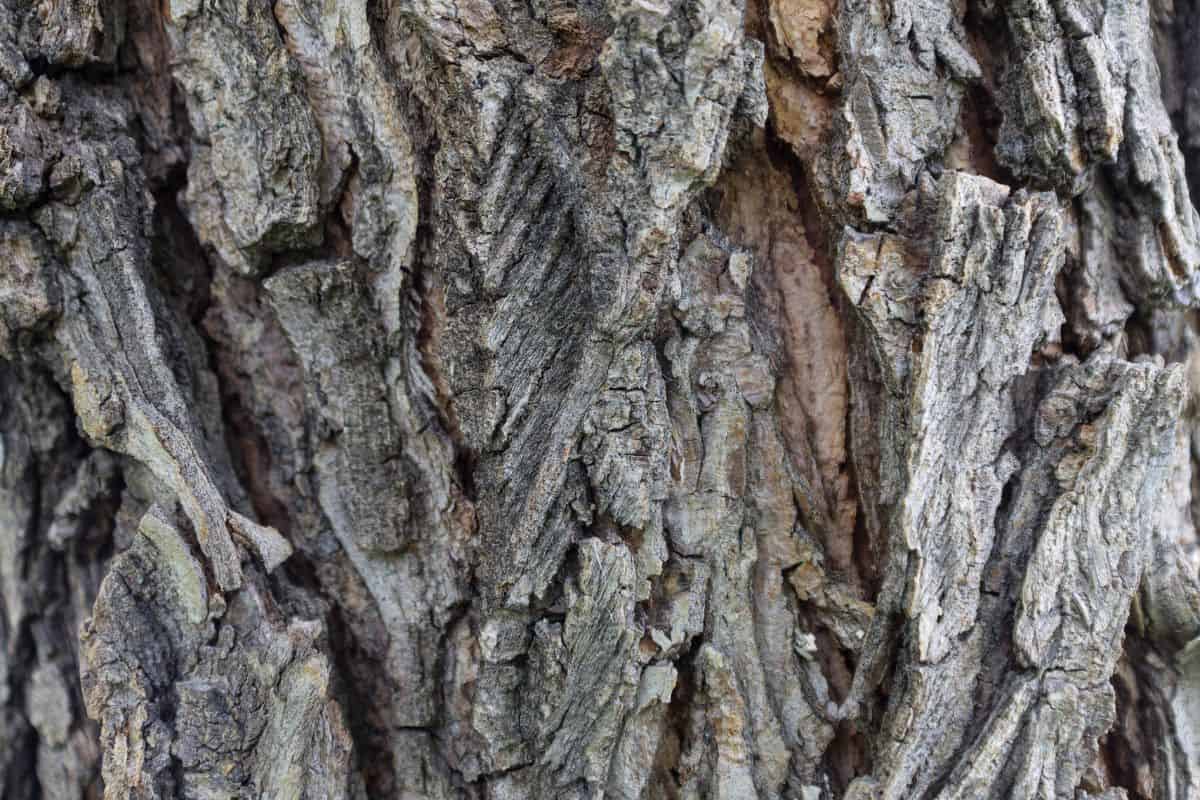 You can also notice differences between these two elms stems. American elms have smooth twigs. Young bark is brown. You'll see the stems turn gray as the tree ages.

The American elm also lacks the hairy buds the slippery elm has. The buds are dark brown, black, or red and are also hairy. 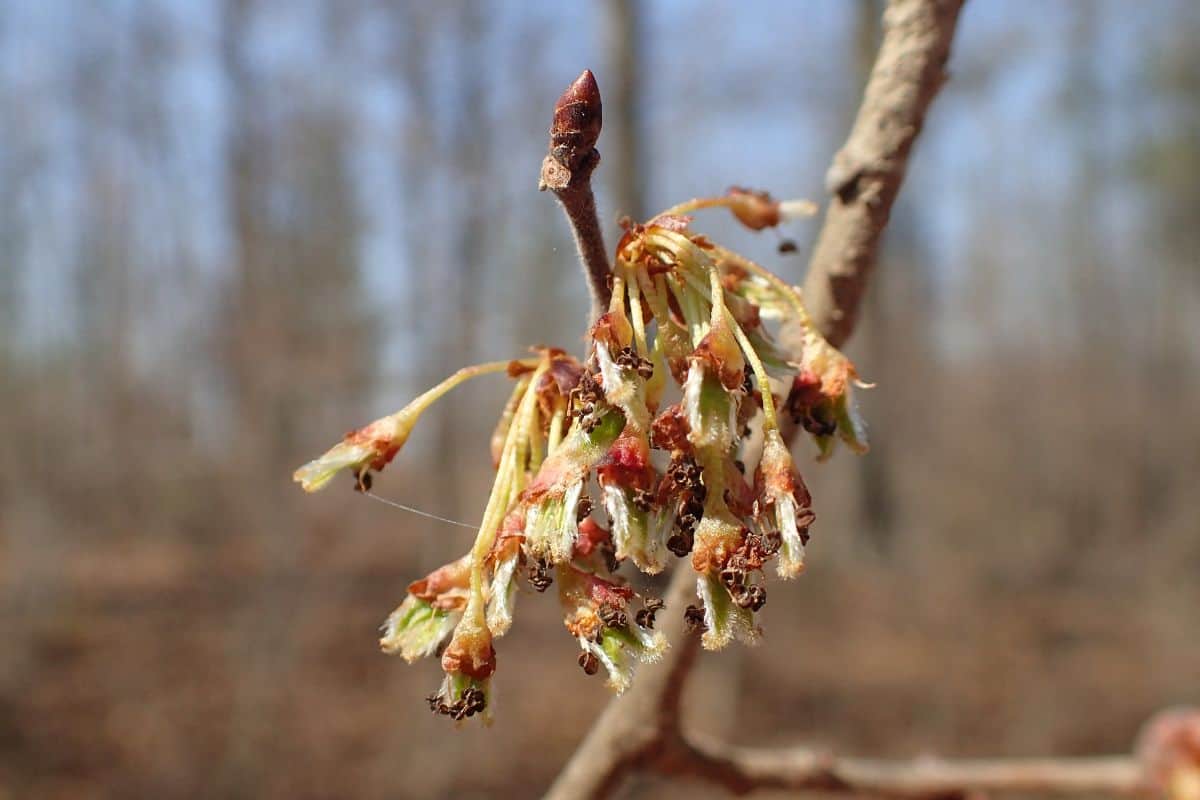 Flowers for the American and slippery elm are green or red. The differences are in how they are formed.

Slippery elms produce flowers in denser clusters along the stem. You can find groups with between 5 and 20 flowers which often bloom before leaves emerge. In addition, you can see hairy flower buds throughout the winter.

American elms have drooping flower clusters. The blooms appear on year-old stems and appear before leaves emerge. These flowers form in groups of 5 to 15 flowers. These blooms also lack the hair that is present on slippery elm flowers. 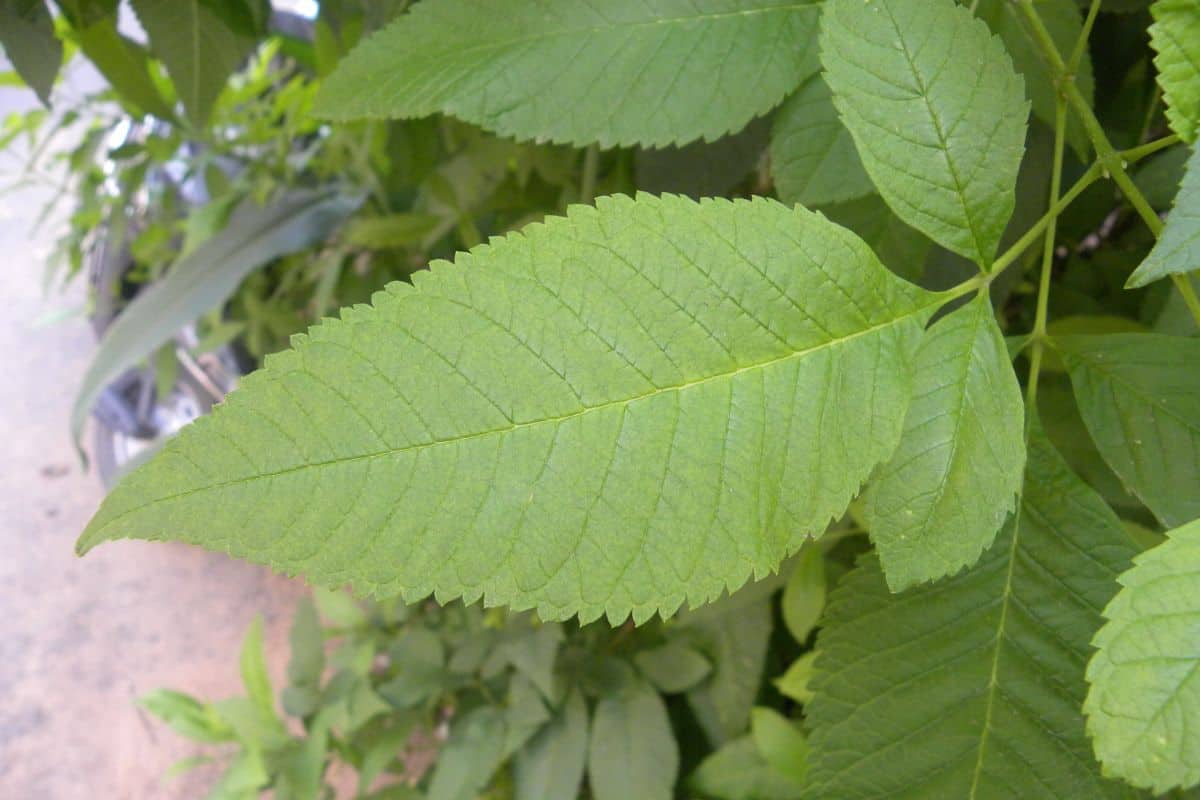 There are also several differences between the leaves of these trees. American elm leaves are slightly smaller and thinner. They are usually between 3 and 6 inches long and 1.5 and 3.5 inches wide.

American elm leaves' upper and lower surfaces are smooth to slightly rough. The veins seen within the leaf are straight.

Slippery elm leaves have a similar shape to American elm leaves. However, slippery elms are larger. Its leaves are between 3.5 and 7 inches long and 2 to 4 inches wide.

The upper surface of slippery elm leaves has short hairs and is very rough. The lower side is more smooth to the touch. In addition, half of the veins turn towards the tips of the leaves. 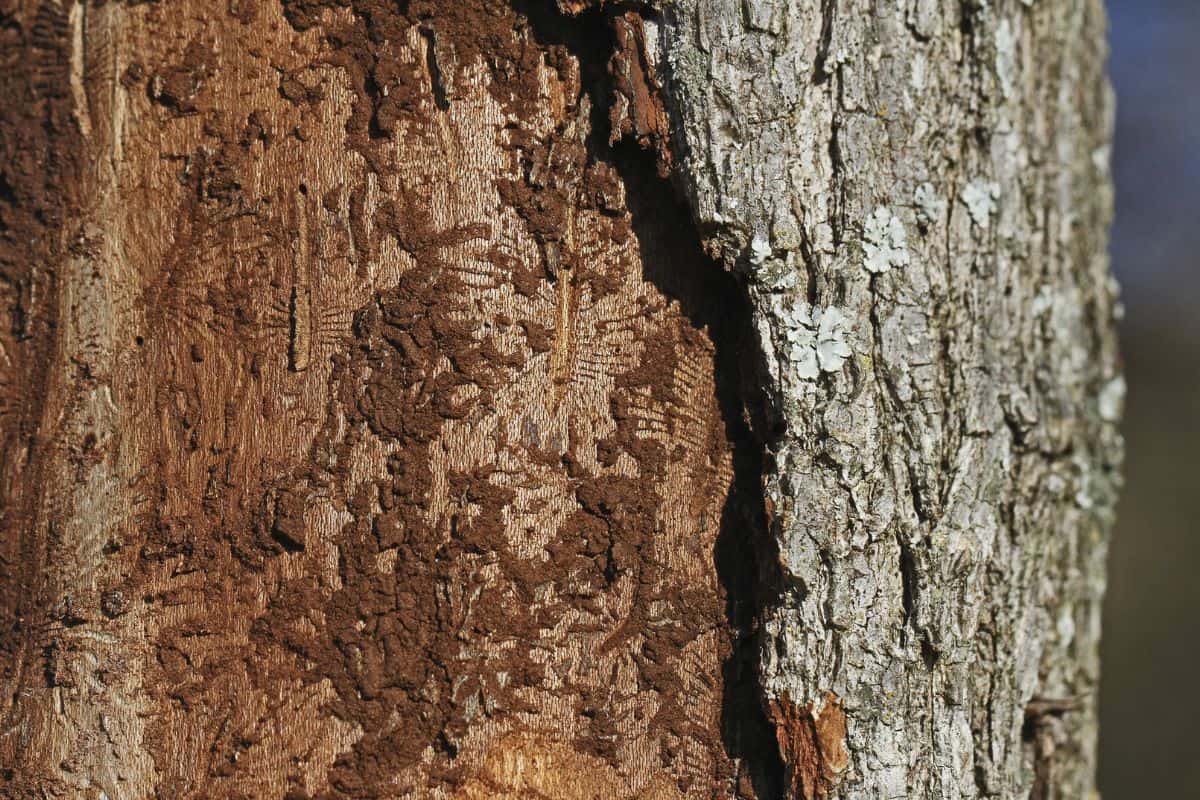 The Dutch elm disease is one of the most serious diseases for elm trees. This fungal infection has devasted native elm trees throughout America, Europe, and New Zealand.

The American elm is resistant to a few more common problems than the slippery elm. While American elms prefer well-drained soil, they can tolerate occasionally wet conditions.

This tree species is also resistant to compaction, fire, and heat. American elms are also capable of surviving grazing from deer.

The American and slippery elm trees are hardy for USDA zones 3a through 9b. They prefer well-drained, loam soil. However, they will tolerate a variety of soil conditions.

Ideally, elm trees should be planted in locations that get full sun. They will tolerate some shade.

Both the American and slippery elm trees are fast growers. They also require similar levels of care and maintenance. Aside from disease, one of the biggest problems with elms is how messy they can be.

Want to know more about how fast elms grow? Check out this post "How Fast Do Elms Grow And How Long Do They Live? [By Type Of Elm]"

Elm trees are excellent for the local wildlife. Deer and rabbits frequently graze on these trees, the seeds are a food source for small mammals and songbirds, and birds often make their nests here.

Is The American Elm Or The Slippery Elm Better?

Both of these trees thrive in the same conditions, share similar physical qualities, and are good for local wildlife. They also share similar problems, such as being messy and susceptible to deadly diseases. For the most part, the better tree will be a matter of personal preference. However, there are a few benefits to having an American elm.

The American and slippery elm trees have similar forming habits. Both are vase-like at the bottom and rounded at the top. However, the American elm was more commonly planted because the twigs drooped more, causing a more symmetrical appearance.

In addition, you can find more American elms that are resistant to Dutch elm disease.

Take a look at these live American elms on Amazon!

What Are Other Types Of Elm Trees?

Another great elm tree is the lacebark elm (Ulmus parvifolia). Unlike other elms, lacebark elm has mottled bark instead of ridged. In addition, the bark will exfoliate throughout the winter months.

This particular elm is resistant to Dutch elm disease and other problems commonly associated with these trees.

Another elm that is resistant to Dutch elm disease is the Siberian elm (Ulmus pumila). This tree grows up to 70 feet tall and 50 feet wide. It is hardy for USDA zones 4 through 9.

Unlike other elms, Siberian elms are frequently used as a windbreak instead of an ornamental tree.

Keep in mind that the Siberian and lacebark elms are considered invasive in several regions of the United States.

Check out this bonsai elm tree on Amazon!

Do Elm Trees Have Invasive Roots?

Generally, elm roots aren't considered invasive. In many cases, the depth that elm roots will grow to depends on the type of soil and the amount of moisture present.

For example, Siberian elms typically have shallow roots. However, they will develop a deep taproot in dry conditions.

American elms also develop a spreading root system typically four feet deep. However, they can spread as deep as 10 feet or develop a taproot as far as 20 feet deep.

The American and slippery elm are very similar in appearance, have comparable growing conditions, and suffer from similar diseases. Fortunately, you can tell these plants apart by their bark, the overall size of the trees, and the foliage!

Need help planning your garden? Take a look at this post, "What To Plant Under Elm Trees [5 Great Options!]."