Figuring out what plants to grow throughout a garden can be confusing if you don't have the correct information. Do you have an elm tree, or multiple, that you want to grow something under but have no idea where to start? What plants like elm trees and can survive underneath them?

Well, we've done extensive research into these questions and have the answers below. Let's discuss!

For anyone wanting to plant something under their elm tree, you've got plenty of options. A few species that we recommend include:

Of course, you want to consider how your elm tree will have a shallower root system, so avoid planting anything with invasive or deep root patterns.

As we begin, we will cover all things elm trees and discuss what to plant beneath them. Whether you have a single elm or multiple, we're here to give you some garden inspiration. With that said, let's dive right into this topic! 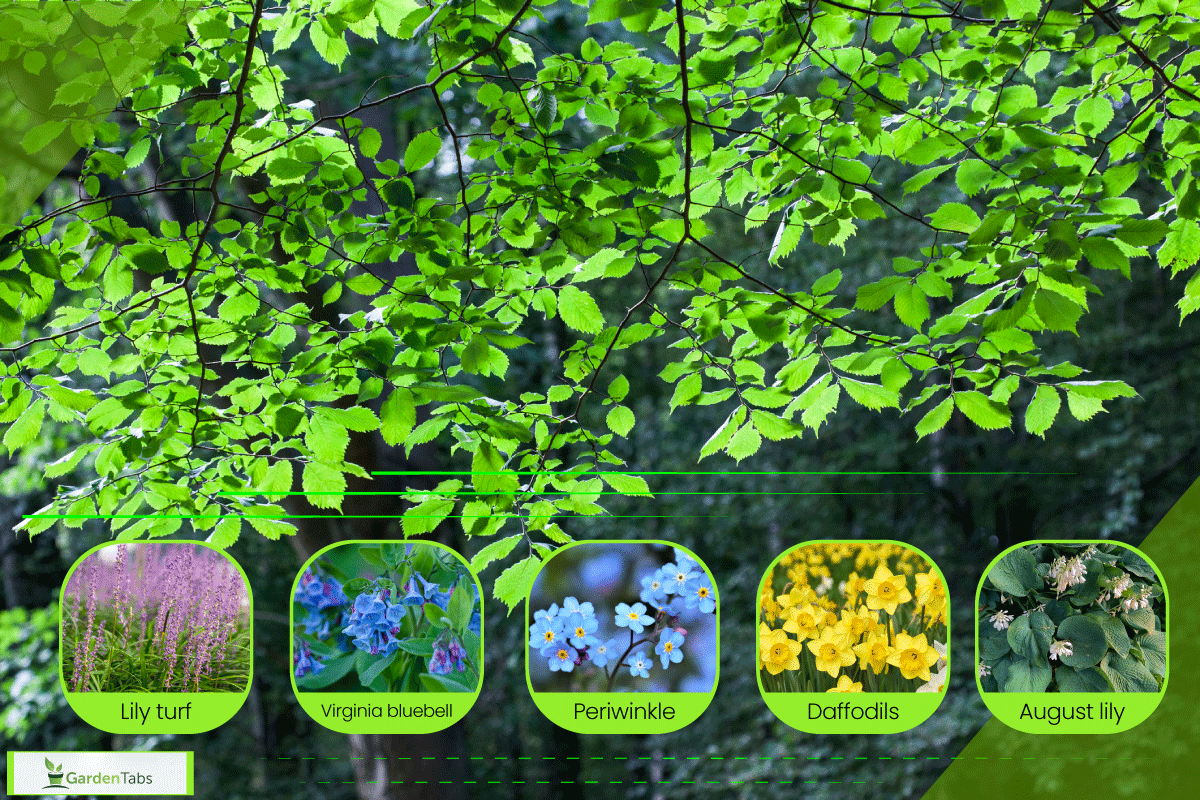 Can You Grow Plants Underneath An Elm Tree?

Although doing this can be nearly impossible, you can try to grow certain plants underneath an elm tree. Generally, you won't see much success with planting anything under a tree, elm or not, due to the constant shade and existing root system.

However, some plants have shallow roots and love the shade, so they'll likely be fine underneath an elm tree. You also want to think about the ground moisture below a tree.

Most of the time, the soil beneath a tree will be moist, so whatever you decide to grow needs to be water tolerant.

One of the more common mistakes gardeners make during this process is choosing plants for under their elms that can't handle excessive moisture. 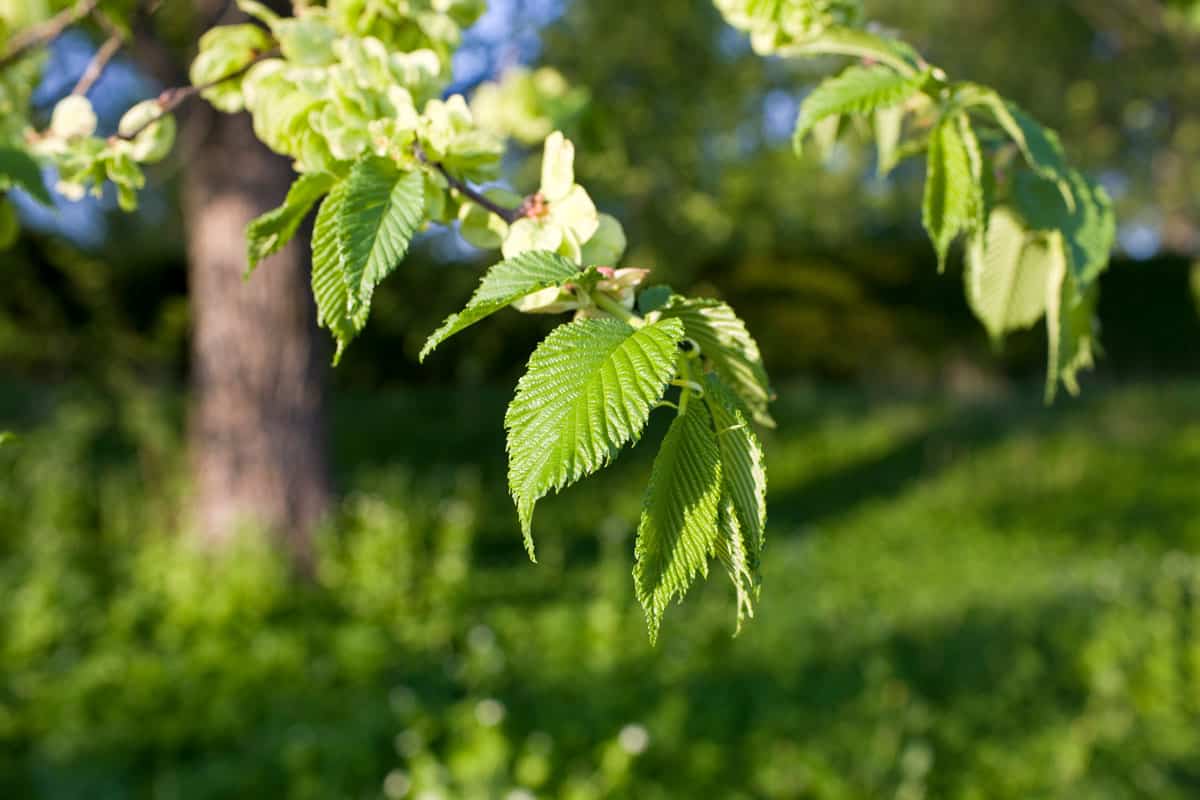 On a positive note, shade-loving species will thrive under a tree's canopy and may even sprawl in other directions, which can be beautiful within your garden.

The key here is finding something that won't overpower your elm's roots but can also survive off-putting conditions.

With that said, let's discuss some of the plants that you can grow under an elm tree below: 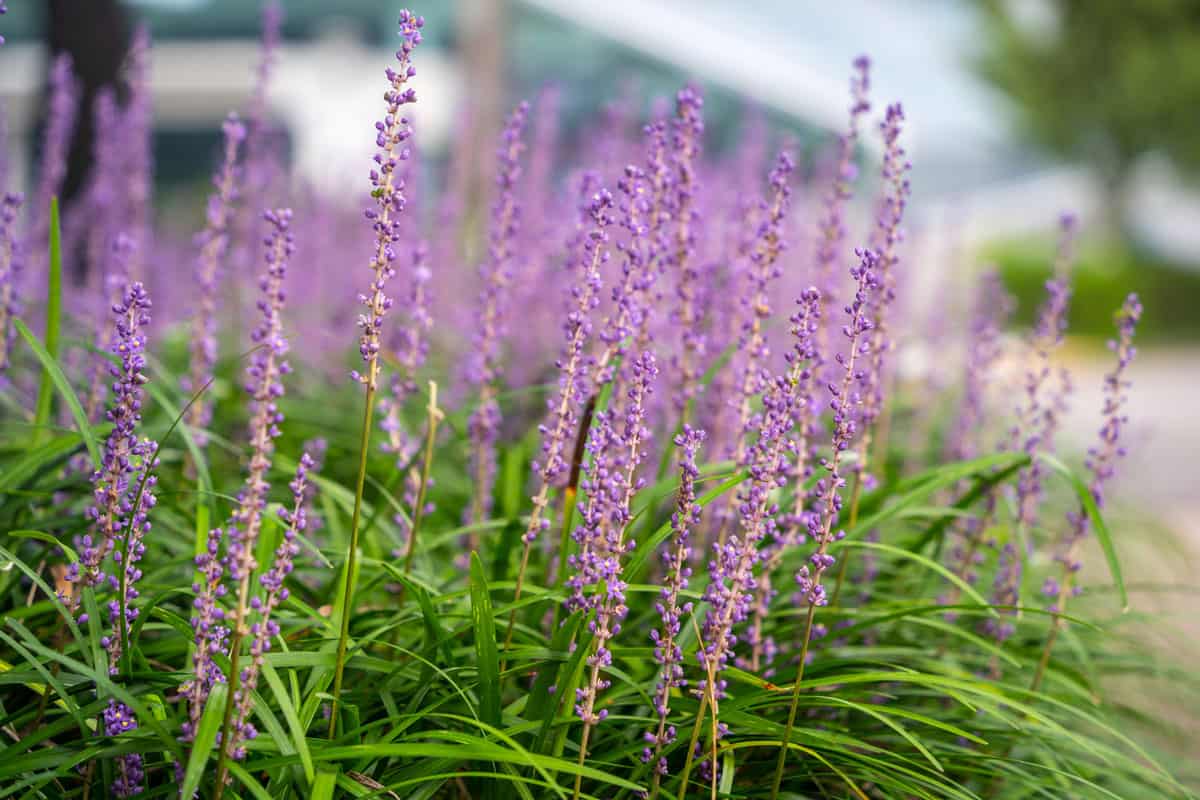 Our first idea for the ground below an elm tree is planting lily turf. Considering this flowering species will thrive in shadier, moister locations, you will likely see it sprawl under an elm.

Furthermore, lily turf is often used as a groundcover or edging because it remains green throughout the year in moderate USDA growing zones, which is a major bonus.

This flower is also incredibly hardy and doesn't have invasive roots, making it perfect for an elm tree. 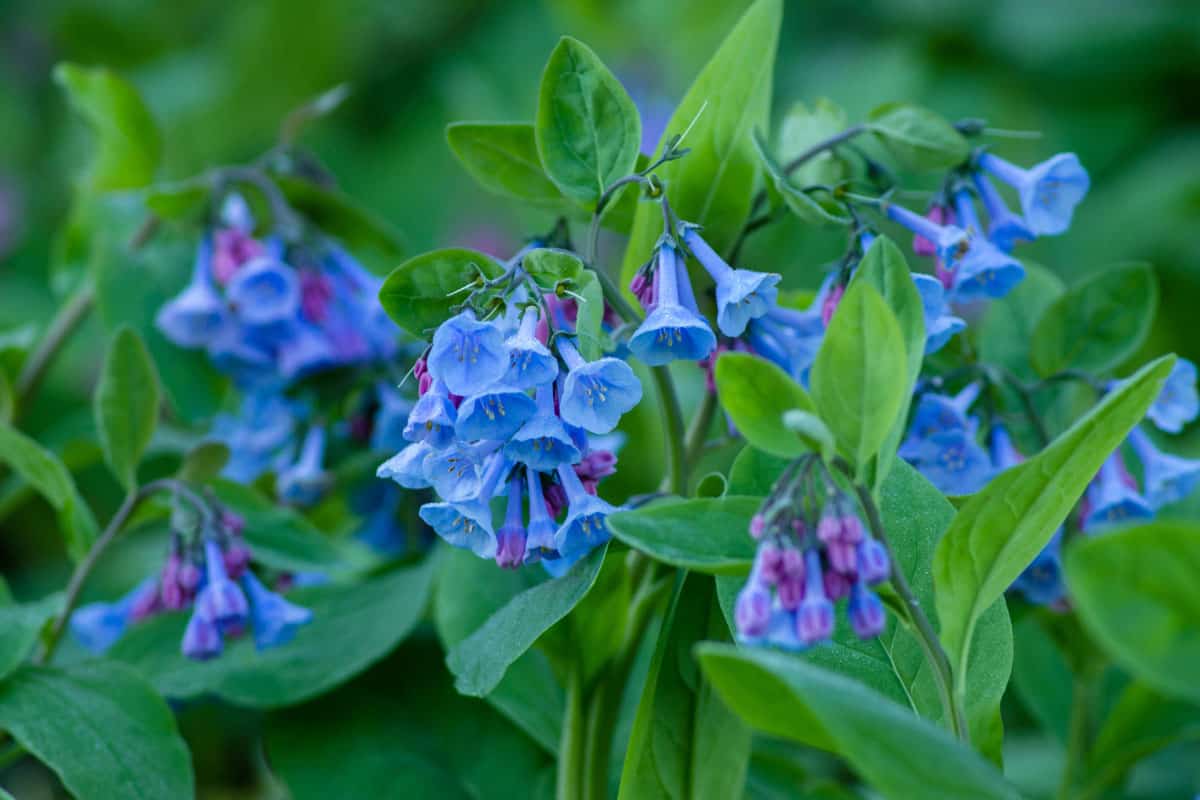 Another great option for beneath an elm tree is to plant Virginia bluebell. Like lily turf, these flowers will survive in the shade and don't mind a little extra moisture.

Generally, Virginia bluebells won't be invasive, so this is a safe choice for your tree. An interesting fact about Virginia bluebells is that they're herbaceous perennials that bloom in the spring and then disappear for the rest of the year.

These flowering plants will also have bright pink buds before turning blue, so they're perfect if you want to add color to your space. 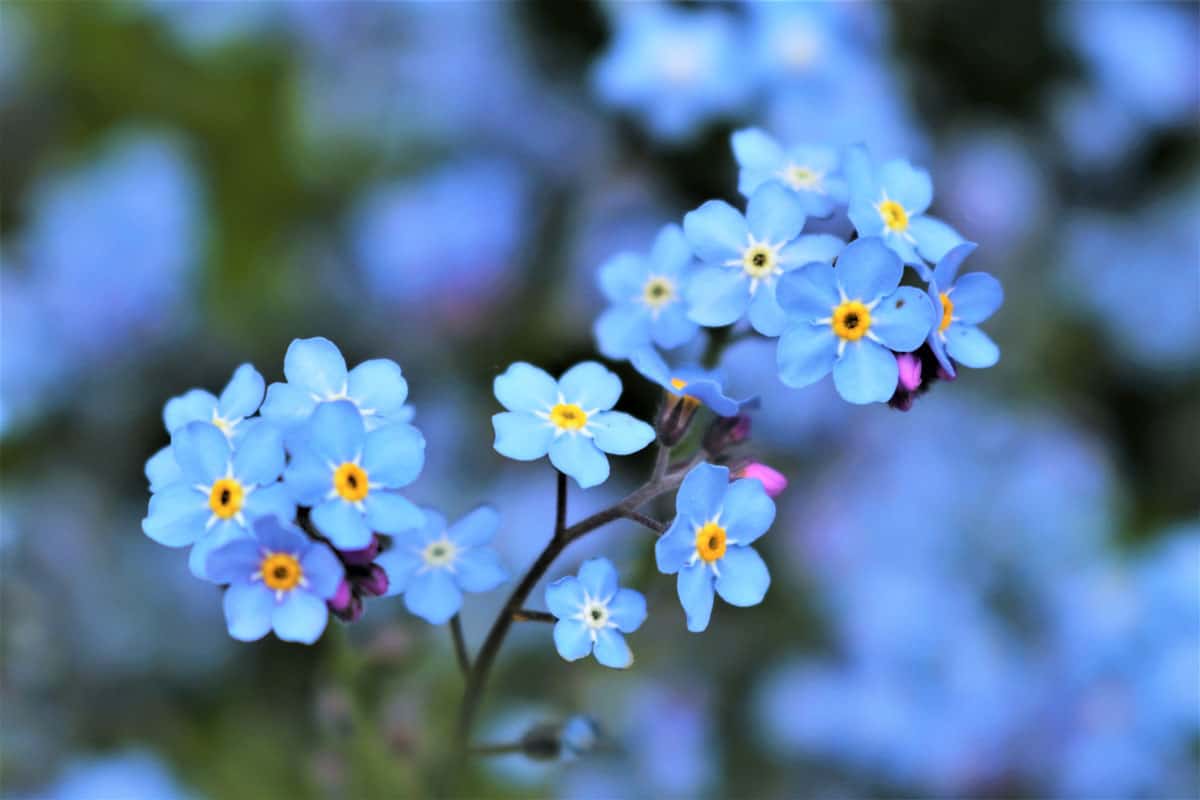 Third, we have periwinkle for underneath an elm tree. Generally, this evergreen groundcover will be easy to grow and manage below your tree and is one of the more popular choices among gardeners.

Furthermore, periwinkles come in various colors, including purple, blue, or white, depending on the cultivar.

You may even want to plant different types of periwinkle under your tree to make the ground a flower-filled masterpiece in the spring.

One side note, these plants can be toxic if ingested, so if you have curious pets or children, this may not be the best idea. 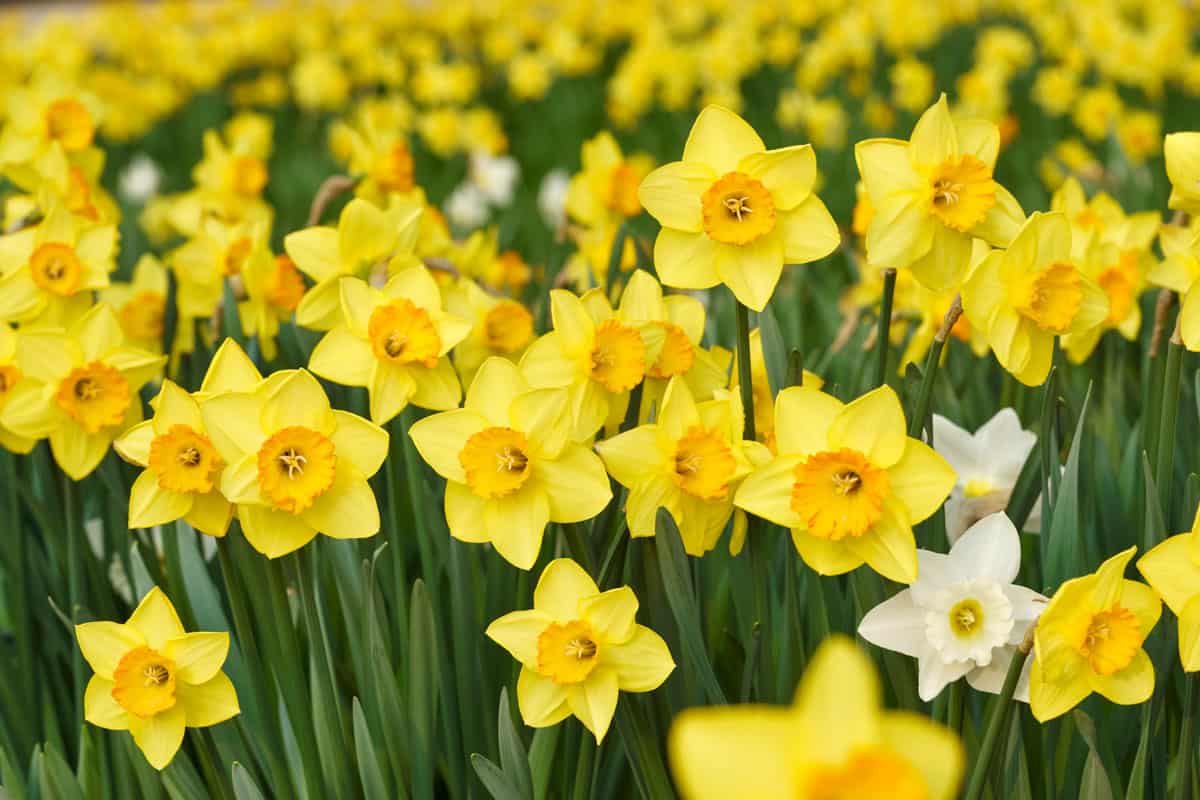 Continuing our flower theme, we have a daffodil recommendation for under your elm tree. Generally, these flowers will self-seed, meaning you don't have to wait long for them to cover the entire ground.

Also, daffodils are very hardy and grow throughout most of North America, which makes them perfect for various climates.

Typically, these flowers won't become invasive and have shallow roots, hence why we think they're perfect for underneath an elm tree. 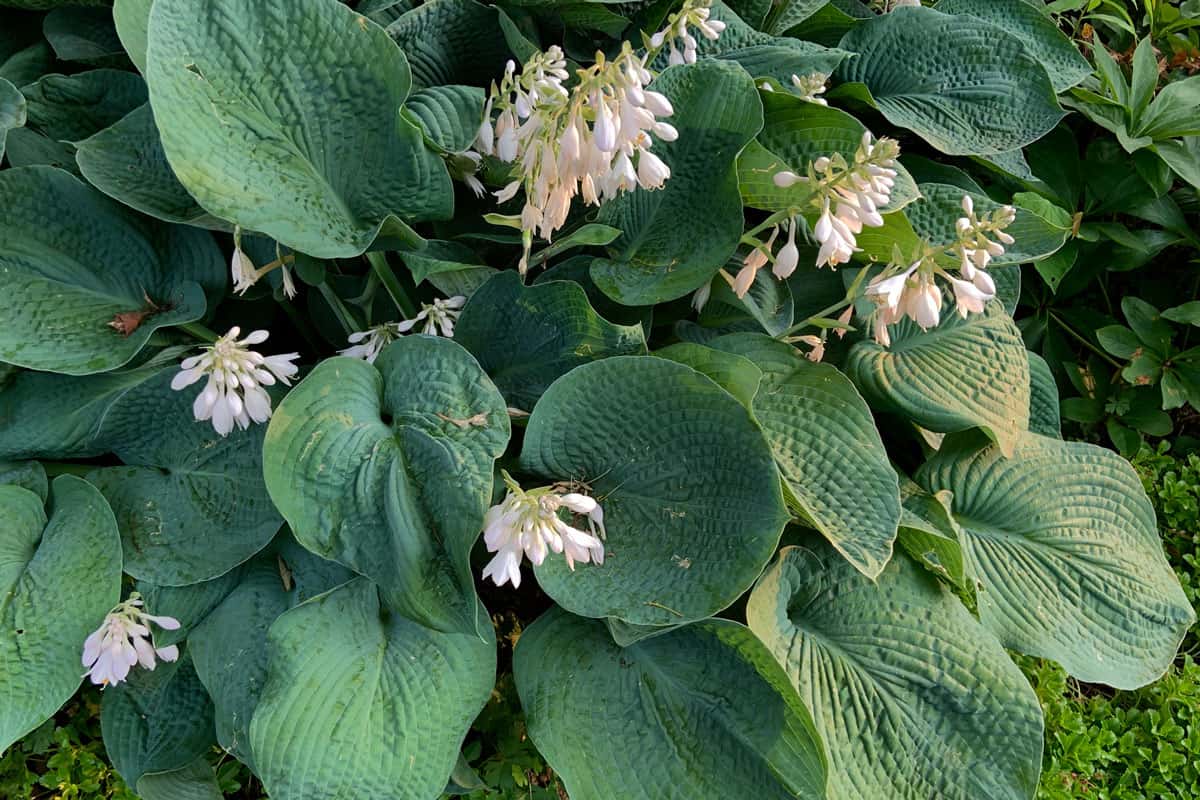 Last, we have the August lily to recommend for underneath an elm tree. Generally, these plants can handle the shade as long as the ground has good drainage, which makes them perfect for your tree.

In addition, August lilies are the only fragrant hostas, so if you want your garden to smell sweet, we think this is the idea for you.

Is It A Good Idea To Plant Something Under An Elm Tree?

If the item you plant below an elm tree has shallow roots, can handle the shade and doesn't mind moist soil, this should be okay.

As we mentioned earlier, elm trees tend to have shallower root systems. That can spell trouble for your tree if you decide to plant an invasive or deeper-rooted plant directly beneath it.

Therefore, it's best to find a ground cover-type plant, which typically won't have deep roots or invasive behavior. Again, this can be hit or miss because your tree will be stronger at the end of the day.

Depending on where you live, the shade your tree creates may even work in your favor, considering many flowering options don't respond well to the hot sun.

For example, if you're somewhere warmer, like Florida or California, you may have more ground cover plants than those in Michigan or New York.

Regardless, research before planting anything in the ground, and don't forget to show your tree plenty of love.

Are Elm Trees Toxic To Other Plants?

Although elms aren't technically "toxic" to other plants, they can release certain chemicals capable of damaging/killing anything near them.

According to Wildflower.org, elm trees are somewhat allelopathic and don't always respond well to competition. Therefore, your tree can kill the plants you grow close by if they begin to compete for the same nutrients/water.

That said, this is pretty standard for plants within a shared space, with one usually having to wipe out the other for survival.

Again, you shouldn't need to worry about this happening if you choose one of the options we recommended above, so don't panic yet.

Additionally, elm trees are notorious for developing infestations and diseases, which can spread to surrounding foliage.

Of course, this isn't always something you're at risk for, but elms have a natural habit of attracting the wrong attention.

How Big Do Elm Trees Get?

For those planning out how much shade their elm will produce, this can be quite a lot. Considering that many elm varieties reach heights between 60-80 feet tall with a crown two-thirds as great, this species is not one to mess with.

Think of a 60-80 foot canopy in your yard. That is a significant amount of shade being produced by your tree, which can affect anything trying to grow below.

However, this can also be a tremendous advantage for hotter climates. As we said, many flowering species don't react well to the heat, so having a great deal of shade might keep them alive during the summer.

So, for someone in Arizona, Nevada, or anywhere in the desert, your elm could be the saving grace of your garden.

In general, you can expect an elm tree to grow between three and six feet per year. Whether out in the country or a more urban environment, elm trees tend to power through whatever condition they're growing in.

This can explain why they are so popular and why we see them throughout the country: wherever we are.

With that said, elms take a little longer to grow if they're new. Sometimes, this can take a couple of years before the 3-6 feet of annual growth becomes a reality, so patience is vital.

Furthermore, if you have other plants growing beneath a newer elm, that could slow its progress even more. Remember, the last thing any plant wants is to compete for nutrients and water.

Even if your ground cover plant has shallow roots, planting too many under your elm can create a battleground within your garden.

Are Elm Trees Easy To Care For?

Yes, an elm tree will be generally easy to care for. As long as you give your elm plenty of sun, fertile soil, and water, it should grow healthy and strong.

As we covered, elms thrive anywhere, whether in big cities or suburbs. These trees have shallower roots, which can be challenging if you plant one near a structure or sidewalk.

That said, your tree should be fine with other plants nearby if it's mature and they're not invasive species. The last thing you want to do is introduce competing root systems in your yard, which can lead to sickness and plant death. 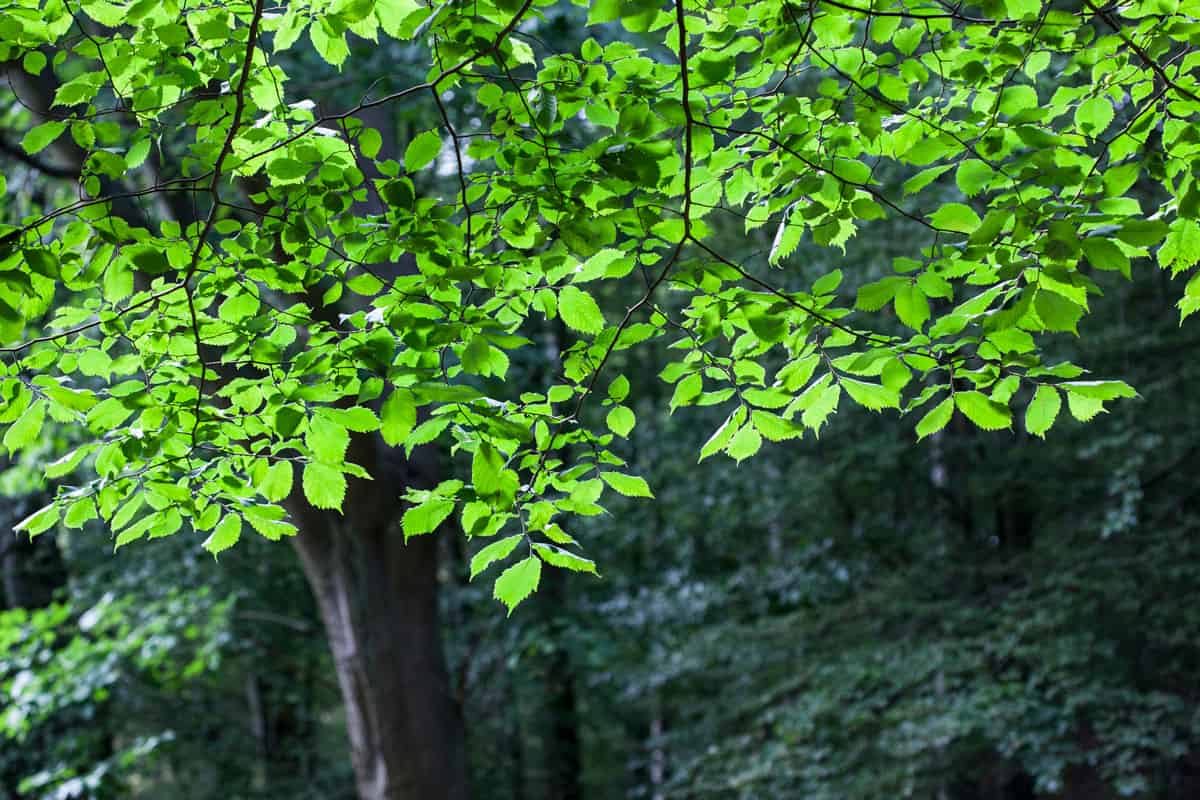 Whether you have an elm in your garden or many, it's always good to know what plants to grow nearby. We found that you can plant ground-covering species below an elm, like lily turf, Virginia bluebell, periwinkle, daffodils, and August lilies.

Additionally, it's also important to choose plants that can handle shade, moisture, and a bit of competition. Sometimes, elm can be toxic, so that's another consideration.

Regardless, try to give your elm and plants beneath good draining soil, and don't forget to research before putting anything into the ground!

Made it to the end? Check out these helpful related elm tree posts!

Do Cedar Elm Trees Have Invasive Roots? [And Where To Plant Them]

How Fast Do Elms Grow And How Long Do They Live? [By Type Of Elm]