Realizing your garden has a bug infestation can be the worst feeling. Have you started to see Japanese beetles rushing around in the morning or late at night and have no idea what to do? Can you use grub control to stop the spread of these pests? Well, we have the answer for you below. Let's discuss.

Yes, applying a grub control product to your yard will likely prevent and get rid of Japanese beetles. For example, the natural bacteria in 'Milky Spore' powder kills Japanese beetles, among countless other products.

Ideally, you want to treat your garden with a grub control in the early summer, as this is before it goes into heat stress.

As we begin, we will cover all things Japanese beetles and discuss how to get rid of them in your yard. Whether this is a yearly problem or your first infestation, we're here to offer some help. With that said, let's dive right into this post! 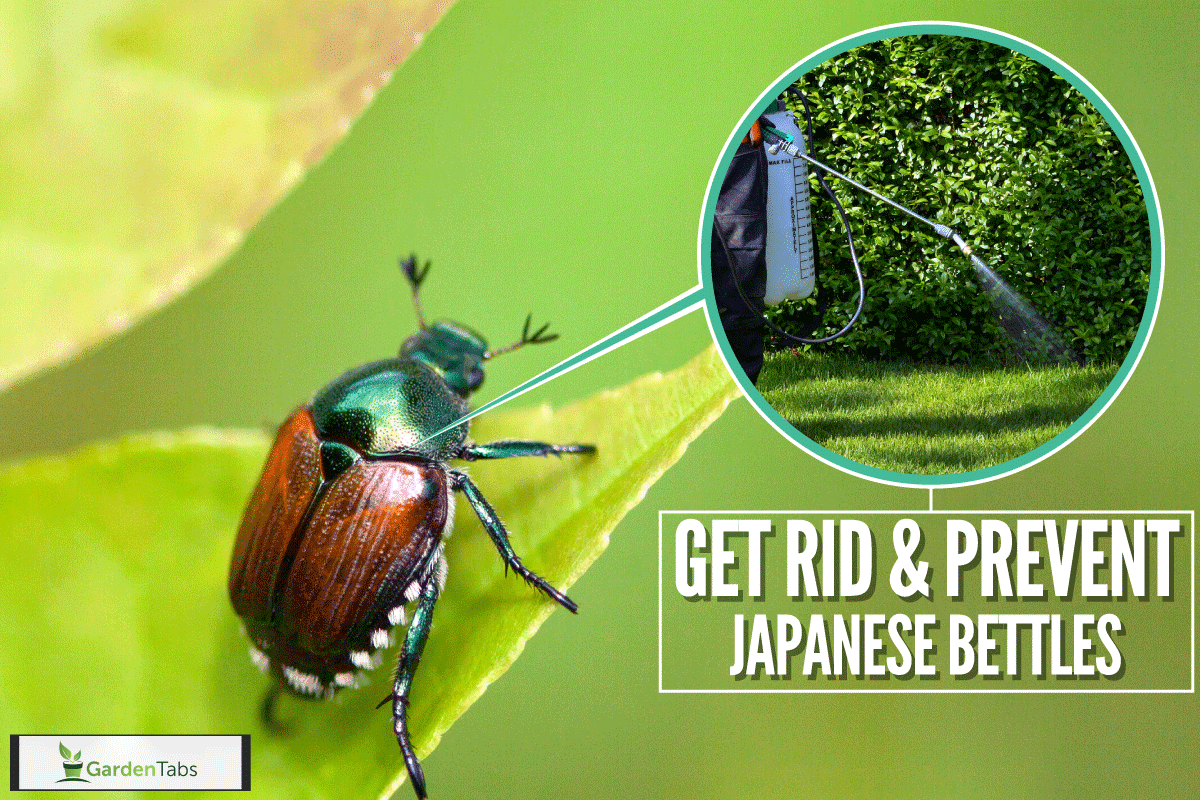 What Does Grub Control Do?

Using a grub control product in your garden is a great way to prevent pests. Generally, you will want to apply these annually, just before the summer heat kicks in.

However, not all grub control products work the same way. For example, Japanese beetles don't always die or even mind these products being used on/near them, so they aren't always effective.

As we mentioned, the bacteria in 'Milky Spore Granular Grub Control' will prevent and kill this bug species. Again, that's not to say every grub killer will be successful, so make sure to read the label beforehand.

According to Michigan State University, depending on where you live, you may need to apply grub control in the early spring for it to work.

They also cover that many grub control products don't work during the peak months of May-October, so that's not great news either.

Japanese beetles typically are most active during June through August or September, which falls into the above timeline. So make sure to find a strong enough product to kill through the summer/fall. 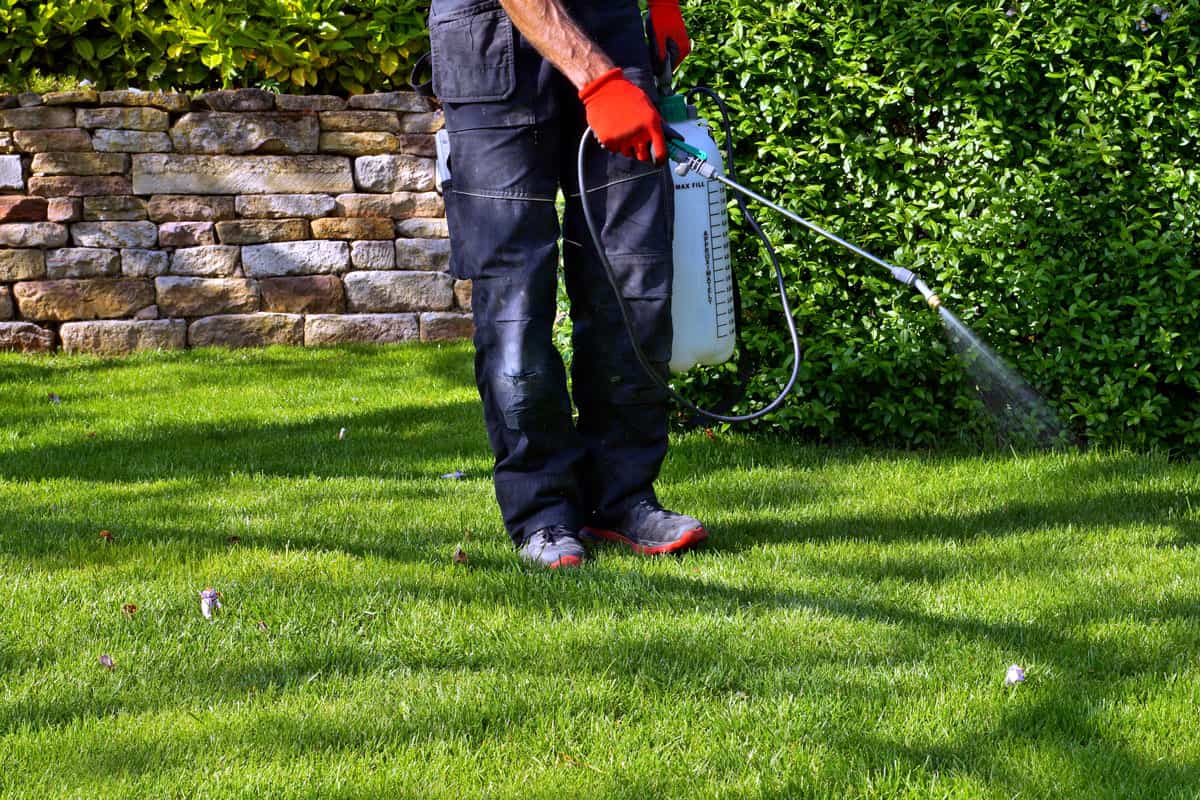 This product works to kill Japanese beetles, has a 10-year guaranteed performance rating, safe to use near waterways, animals, and people, and comes in a 10-ounce bottle.

Check out this product on Amazon here.

How Effective Is Using Grub Control For Japanese Beetles?

The jury seems to be out when it comes to the effectiveness of grub control for Japanese beetles. Although some products are potent enough to kill/prevent them, not all can accomplish this.

Some bacteria in higher-quality grub control products will be strong enough to kill an active beetle infestation. However, that's not always the case.

According to the University of Michigan's MSU Extention, you want to irrigate your yard after using a grub/pest control product for Japanese beetles. That is because they burrow into the ground, sometimes as deep as 12 inches.

For this reason, letting the water bring the insecticide deeper into the ground will give it a better chance of working. They recommend using at least a 1/2 inch of water post-application, so keep that in mind.

Furthermore, there are plenty of products specifically targeted toward this beetle species. Although you may not find one that does everything, there will be an option for Japanese beetles wherever you shop.

How Often Should I Use Grub Control?

In general, you don't want to apply grub control to your garden more than twice per season. Depending on the infestation, you may feel like more is better, but that's not always true.

According to Crab Grass Lawn, your first application should be the second you notice beetles present, and then your second one should be a month or so later, before the hotter summer months.

On the other hand, some experts say that using grub control every two weeks until an infestation subsides is okay. Again, this varies by product ingredients and strength, so read the label on whatever you use.

Although applying an insecticide weekly can kill bugs in the area, it could also damage your plants, so be cautious of this. As we said earlier, it's also a good habit to annually apply grub/beetle killer around your grass or garden to prevent an issue, so that's something to consider.

What Time Of Year Are Japanese Beetles Most Active? 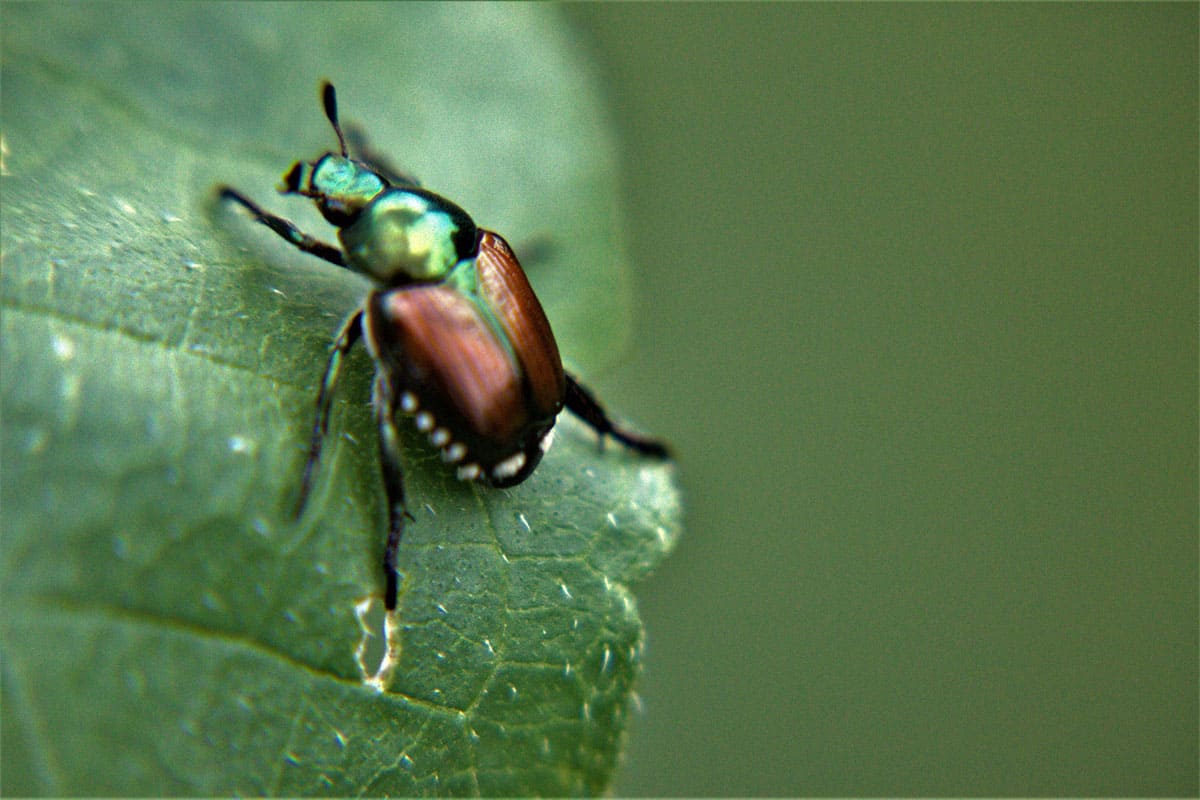 Japanese beetles will be most active during the summer, specifically June through August. That said, you may notice Japanese beetles still present in your yard until mid-September if the weather is still warm.

Typically, these beetle species thrive in warm, wet conditions, hence why the summer is their prime.

Considering that these bugs have a relatively short lifespan (roughly two months), they won't be around for long. However, while they are alive and active, expect them to reproduce and eat your plants.

What Time Of Day Do Japanese Beetles Come Out?

Now that you know what months these critters are active, it's essential to know their daily schedule. Usually, Japanese beetles will be visible during the early morning-afternoon (9 AM to 3 PM).

However, that can vary depending on the climate, so if it's colder during the day, you may not see them at all. Temperature-wise, Japanese beetles need to be in weather at least 70 degrees Fahrenheit.

If the temperature drops into the 50s or 60s, this could kill off a good amount of the beetle population in your garden. So think of that as nature's way of dealing with them.

Another natural beetle preventer is humidity. If the humidity levels go above 60%, this inhibits Japanese beetles from flying. Although that may not seem too bad, it puts the bugs at greater risk of being eaten by predators nearby.

What Are Some Natural Ways To Kill Japanese Beetles? 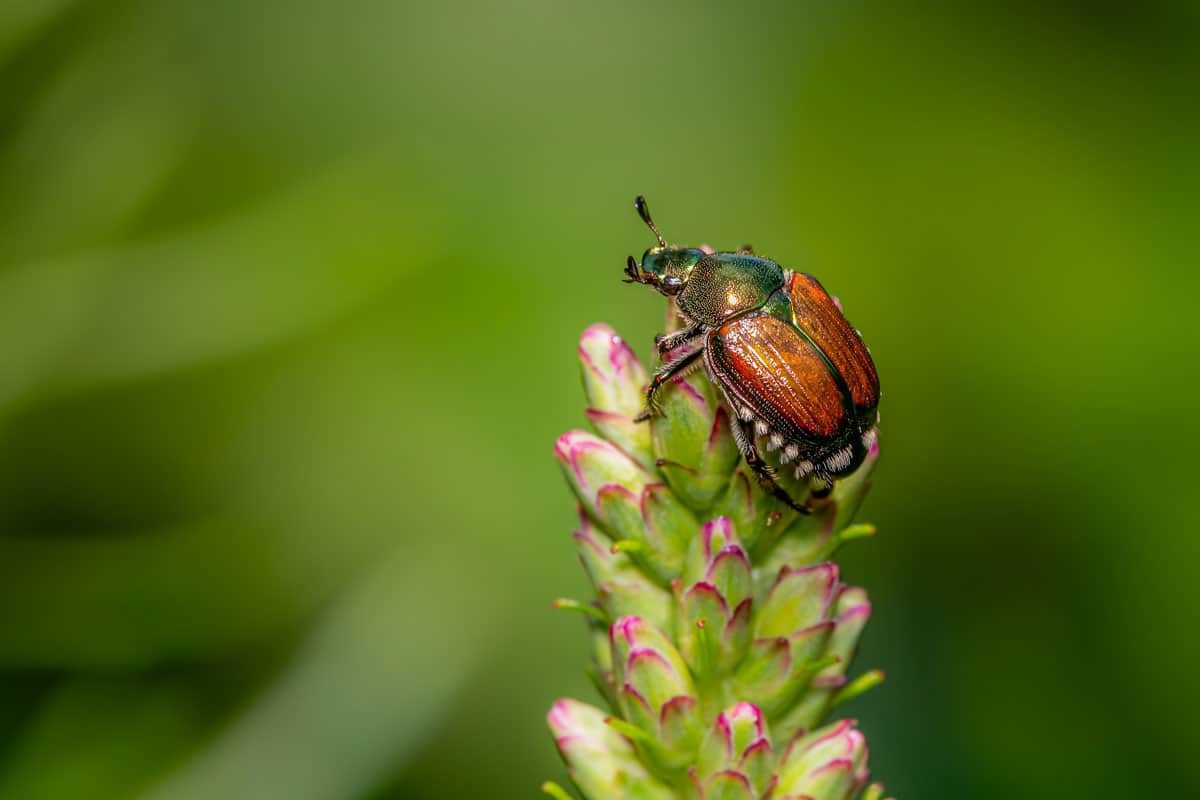 Although you can use grub control to prevent and kill Japanese beetles, there are also natural alternatives that might be worth a shot. One of the more popular options is a mixture of soap and water.

To create this natural beetle killer, you need to gather four tablespoons of dish soap and mix them into a quart of water. Ideally, you will put this mix into a spray bottle, which you can use around your garden on any beetles you run into.

In addition, you can try these natural alternatives:

As we said, there are endless ways to rid your yard of Japanese beetles, so you have plenty of choices. On top of this list, you can also try attracting predators to this bug species into your garden, including birds and other fowls.

You may even want to plant beetle repellant plants in your yard to naturally eliminate Japanese varieties, including nasturtium, tansy, catnip, and rue.

Again, these critters are only alive for two months, so if all else fails, just hide in your house.

Sticking to natural beetle killers, vinegar will work to eliminate them if you use it right. Generally, you want to mix equal parts apple cider vinegar and water in a bucket.

Next, you can fill a spray bottle or pour the bucket around a Japanese beetle nest. The acid in this mixture will be strong enough to kill any present bugs, so it's worth trying.

A pyrethrin-based insecticide is another highly-potent beetle killer made with natural ingredients.

It works well to control beetles on your vegetables, grapes, raspberries, flowers, roses, trees, and shrubs, so if that's your situation, try a pyrethrin product.

Will Japanese Beetles Come Back Every Year? 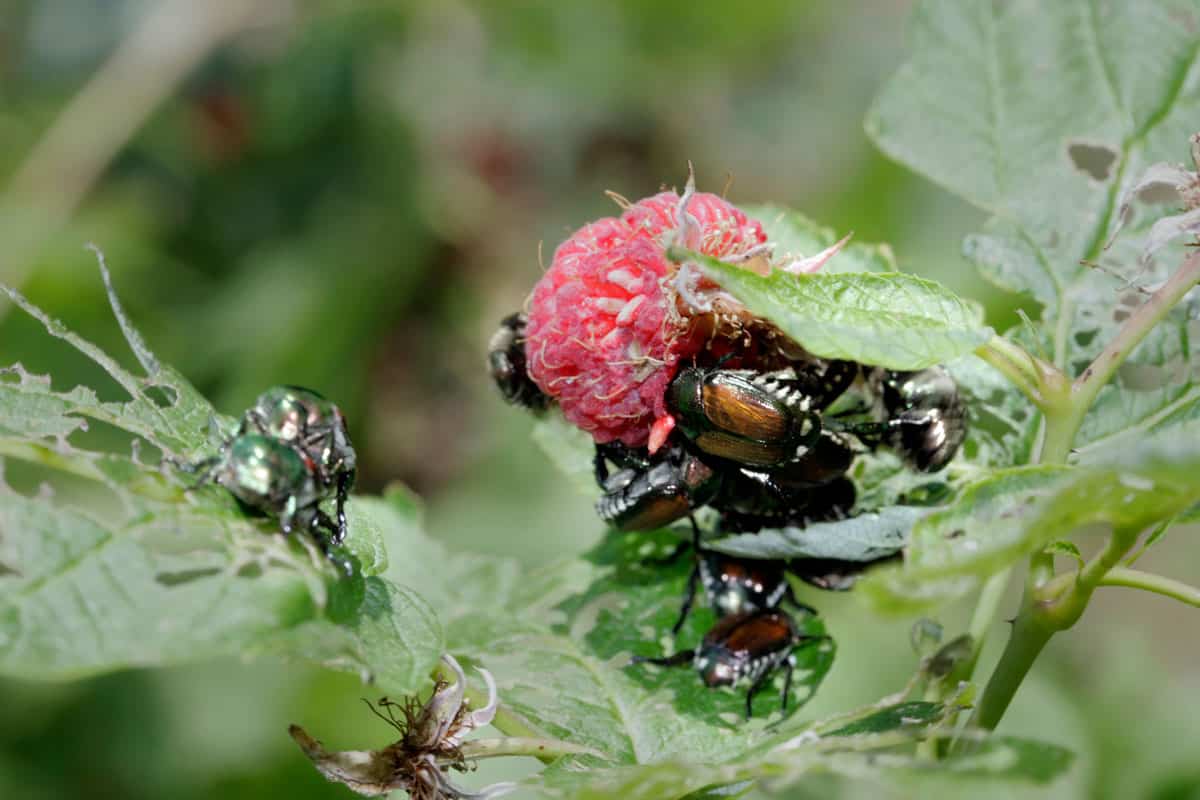 Considering that this beetle species has a two-month lifespan, many people assume once the summer ends, so do the bugs. However, that's not always the case.

In general, Japanese beetles mate and lay their eggs just before winter. They burrow these larvae/eggs deep into the ground, which means new ones will pop up as the warmer springtime weather hits.

For this reason, you may see a complete disappearance of the beetles in August/September, but notice them come back around April/May.

As we covered above, you want to spray a grub control product over your garden annually, which will prevent the larvae from coming to the surface.

If you fail to take any preventative measures, expect the cycle to continue each spring and summer.

Will Japanese Beetles Eat My Plants?

Yes, Japanese beetles do enjoy eating plants. To be precise, these critters eat more than 300 different species of plants, which can mean plenty of damage to your precious garden.

Some of the more attractive plants to Japanese beetles are roses, shrubs, vines, ornamental and fruit trees, and vegetable crops, which can be detrimental to your harvest/blooming period.

For that reason, you want to make sure and kill the beetles the second you see them. If not, you will have a much bigger infestation through the summer, which is already hard on your plants.

To Finish Everything Up 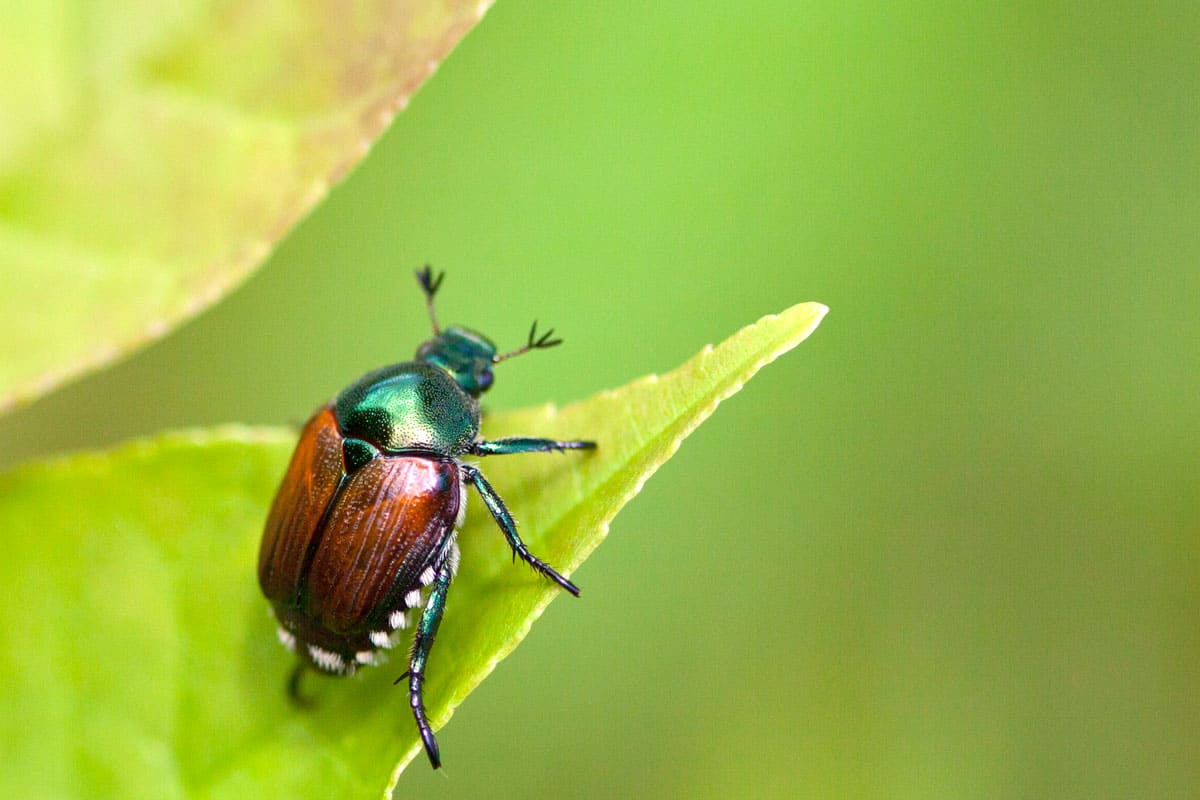 Whether you have a Japanese beetle invasion in your garden or have noticed a few crawling around, it's always good to know how to get rid of them. From what we found, you can use specific grub controllers on Japanese beetles, although they aren't always effective.

Typically, products with milky spore powder will do the best job at killing and preventing Japanese beetles. You can also try various natural remedies, including soapy water, cedar and neem oil, and even planting chives, catnip, and geraniums.

Regardless, you want to try and annually spray your garden with some bug repellant to keep an invasion from happening in the spring and summer.

Where Do Japanese Beetles Go At Night? [And How To Keep Them Away]