The Japanese beetle is one of the most destructive garden pests that you'll come across. These beetles love to cause damage to shrubs, garden crops, and plants. So what's the best way to get rid of them? We've researched the different methods to get rid of Japanese beetles, and in this post, we will share them with you.

Here are some of the most effective ways to get rid of Japanese beetles:

Japanese beetles are especially fond of roses; however, they're known to be pretty non-discriminatory. If you have a Japanese beetle infestation, there are ways that you can minimize the population. Continue reading to learn about the most common methods used to do this. 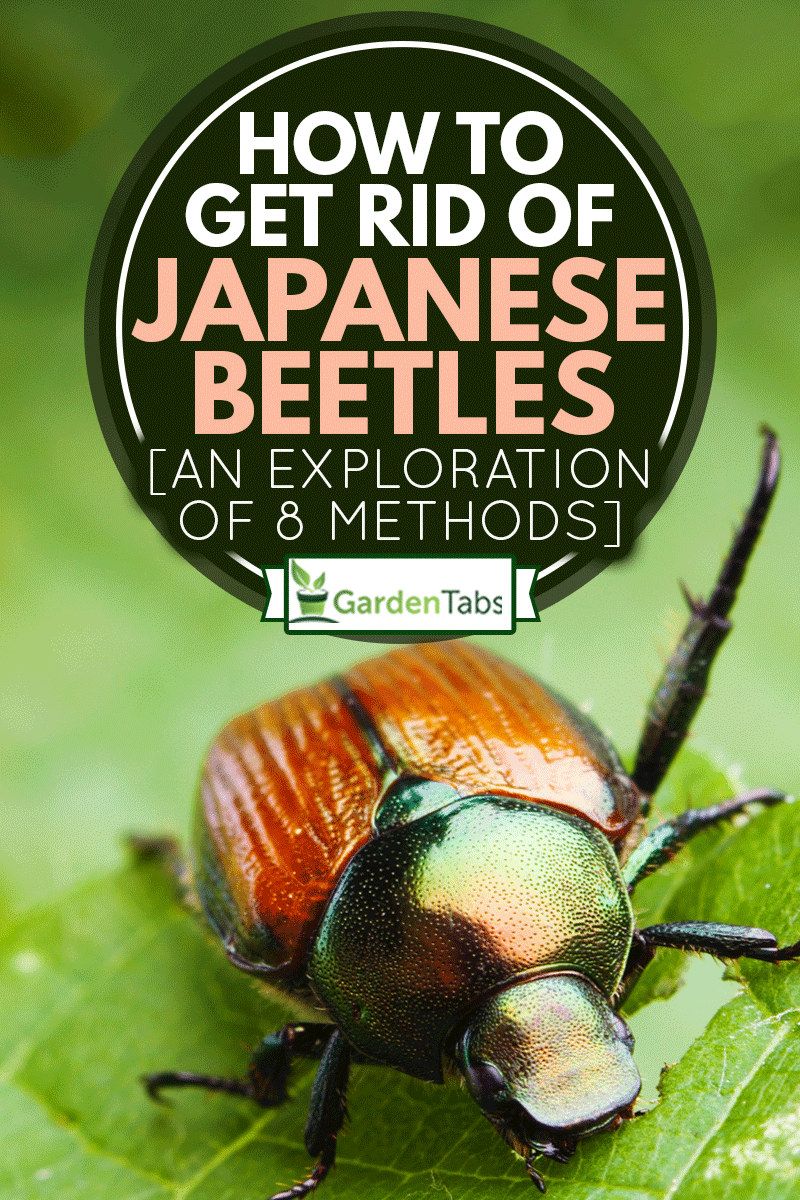 Ways to Effectively Get Rid of Japanese Beetles

You can purchase different traps from home improvement stores that are made specifically for these beetles. The traps are set in your garden or lawn and lure the beetles one by one using special scents. They're especially effective for reducing large Japanese beetle populations, and the good thing is that you don't have to leave the trap out for weeks and months at a time.

Generally, leaving the trap out just for one two three days will significantly reduce the population. Keep in mind that Beetles often feed on any trees or plants located near the traps, so it's best not to plant your favorite plants near their locations. The best place to set the trap is near the edge of your lawn, away from any plants that the bugs may feed on.

Read more details about this beetle trap on Amazon.

And of course, commercial insecticide is always an option to eradicate Japanese beetles effectively. If you are worried about toxicity to your other plants or pets, consider using insecticides that are pyrethrin-based. These insecticides are typically safe to use on vegetables such as roses, grapes, strawberries, and other fruits.

Check out this commercial insecticide on Amazon.

You can also create a barrier around your lawn or garden to prevent Japanese beetles from damaging your crops. The best way to do this is to place row covers on top of the ground before the beetles began their feeding period.

Garlic is a natural insecticide and is often used in home gardens to eliminate several different types of plant pests. The scent of garlic is a turnoff for the beetles, so it's best to apply it to the areas where the beetles love to feed. To apply the garlic, make a spray using four garlic cloves and a quart of water. You can boil the cloves in the water for five minutes or allow them to sit in the water for a couple of days. Next, pour the solution in a spray bottle or garden sprayer and spray the plants every few days to help keep these bugs away.

Check out this garden sprayer on Amazon.

Pick them by hand

Removing the Japanese beetles by hand is always an option as well. However, most gardeners may not be a fan of this particular method, as they may be squeamish about touching any type of insect. But you'll be happy to know that these beetles don't bite, and you can simply pick them off of your shrubs and place them in a bag. You can also spray them with your garden hose or warm soapy water.

Read more about this garden hose on Amazon.

Baby powder is a good deterrent for Japanese beetles, particularly if you have a small garden or just a few affected plants. To use baby powder, sprinkle it on the leaves where the infestation is heavy. Try doing this two or three times a week to help keep the bugs away from your plants.

The baby powder will not harm the plant, and it will rinse away after the next rain. When applying the powder, be sure to only lightly dust the plants--no need to apply it heavily.

Check out this baby powder on Amazon.

Japanese beetles do not like neem oil...at all. To help keep the bugs away, pour neem oil into a garden sprayer or bottle and apply it to the plants. You can apply the neem oil two or more times a week if needed to help kill beetles on contact. The great thing about neem oil is that it can also kill the larvae so that they cannot grow into adulthood and spread even further. 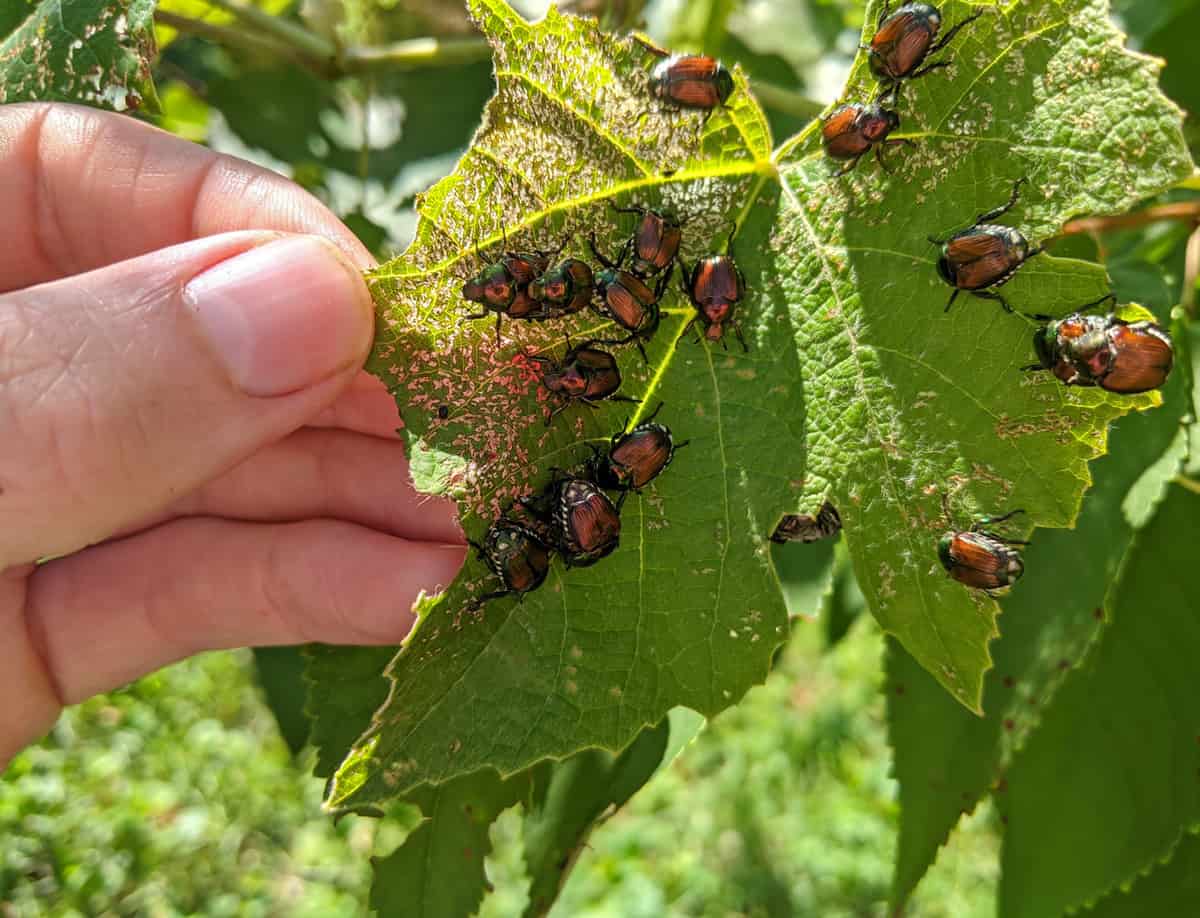 There are also ways that you can prevent Japanese beetles from taking over your garden. Let's take a look at a couple of the best ones.

Japanese beetles love to munch on grubs, which are known to live beneath garden beds and lawns. If possible, try to remove any grubs from your garden bed before beetles have a chance to feed on them in the garden. There are several options for controlling grubs, including planting nematodes and milky spores, which can also eliminate Japanese beetles and using organic fertilizer.

Tidy up your garden

Keep in mind that Japanese beetles are also attracted to disease plants, rotting wood, and other organic matter. Keeping your garden clean and tidy can help to prevent them from hanging around your shed, nearby plants, or the lawn area surrounding your garden. Also, be sure to properly bag and store unused soil, mulch, and other supplies.

Check out this garden storage container on Amazon.

One of the most effective ways to get rid of Japanese beetles naturally is to spray your plants or shrubs with neem oil. Neem oil can kill Japanese beetles on contact, and it is especially effective in killing larvae, which will also feed on plants.

Why are Japanese beetles bad? 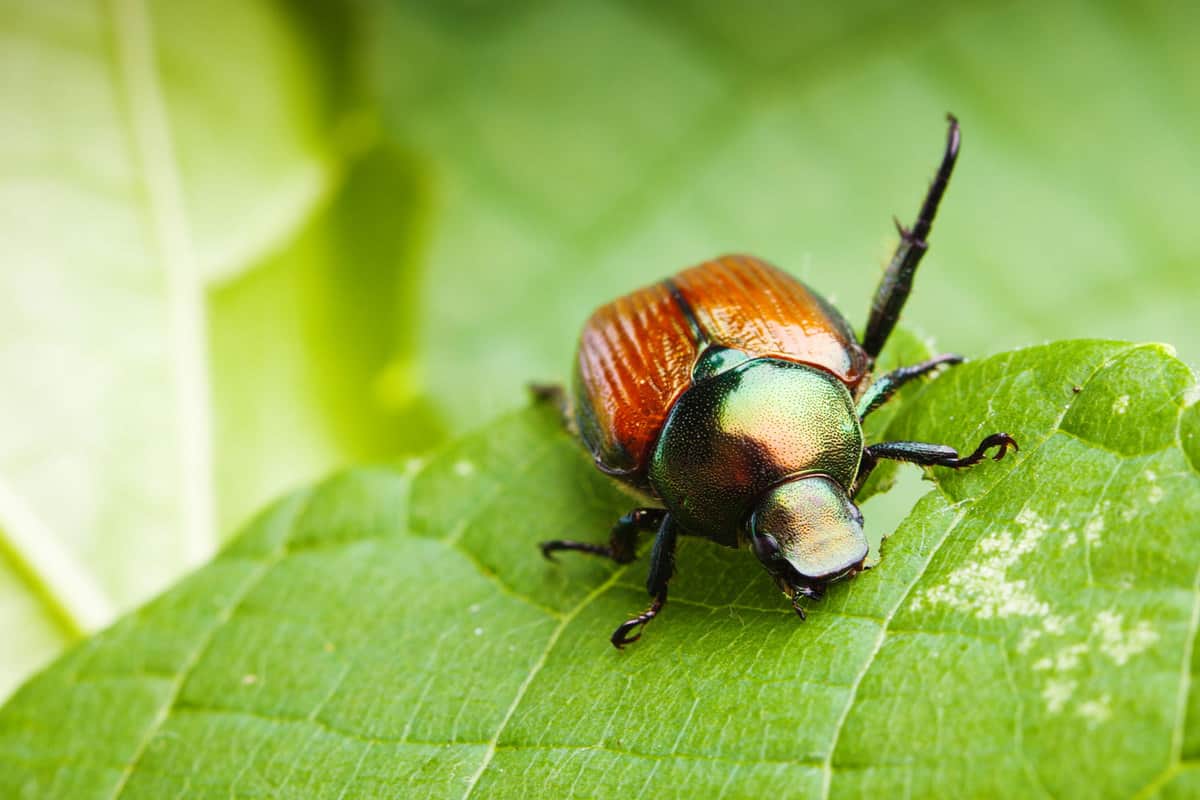 Japanese beetles are bad for gardens because they are very destructive to plants and small shrubs. Interestingly, they are just as destructive and both their mature and immature forms. When these bugs are still larvae, they can chew on dead roots and vegetation, creating large holes in your garden.

Adult Japanese beetles can gather in fairly large numbers and wreak havoc on garden vegetation, eating any leaves, flowers, fruits, and other organic matter within a matter of days. These small oval-shaped pests have been known to feed on over 300 different plant species, and they are especially fond of roses, vegetable crops, and fruit trees.

Will Japanese beetles ever go away?

The beetles can be especially difficult to get rid of as they lay larvae frequently. Getting rid of them requires a multifaceted approach that usually consists of insecticides, preventative measures, and regular monitoring of common food sources. As long as Japanese beetles have a food source, they will not go anywhere until the fall and winter months when the temperature changes, as this is when they die off.

What time of day are Japanese beetles most active?

Japanese beetles are most active during daylight hours, especially on days that are sunny and warm. They prefer to feed in groups during daytime hours. Their peak feeding activity can last anywhere from mid-June to September, when they typically die off due to climate and temperature changes.

When is the best time to spray for Japanese beetles?

The best time to spray Japanese beetles is during their peak feeding times in the summer and right before the fall season. During this time, the bugs are still small or moderately sized, making them easier to kill. Also, it's best to remove the beetles early in the morning, as they are less active during this time.

A few common plants that these beetles do not care to eat include Begonias, Lilac trees, Pansies, Dogwood trees, and Poppies.

How do you get rid of Japanese beetles on roses naturally? 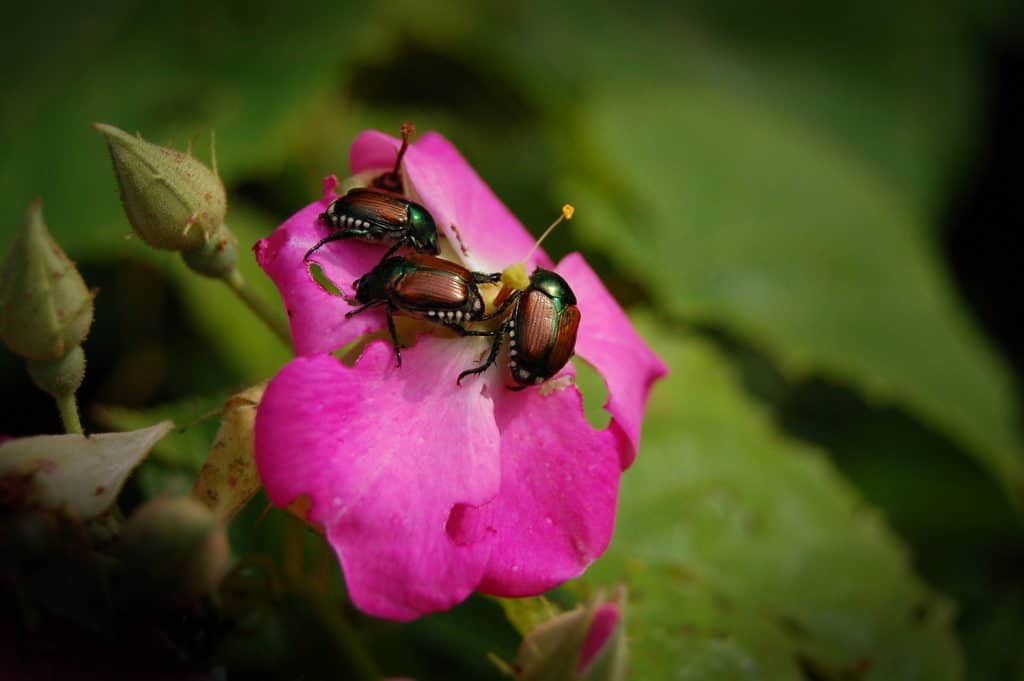 If you prefer not to use insecticides, traps, or pick the beetles by hand, natural options are your best bet. Let's look at some of the most popular ones.

You can make a homemade beetle spray by combining two cloves of garlic with two hot peppers. Place the garlic and peppers in a food processor or blender and then pour in a pint of water. After pureeing the ingredients, strain them and add a tablespoon of mineral oil or dish soap. Next, pour the mixture into a spray bottle and let it sit overnight to increase its potency. Spray the affected plants with the spray to help rid of the beetles.

Japanese beetles love to munch on anything sweet, which makes this trap perfect for gathering them up by the numbers. To create this trap, combine 1/4-cup of sugar with 1/4-cup of water and place both into an empty milk container. Shake the container well so that the sugar dissolves. Next, take half of a ripened banana, smash it, and place it into the container as well.

Apply duct tape to the edges of the opening. The smell of the fermenting banana will attract the beetles, and they won't escape from the bottle once they are in the water.

Onions are another popular pest deterrent for lawns and gardens. They are especially popular for vegetables and fruits and can help deter Japanese beetles and other pests such as field mice, aphids, mites, and maggots. Onions can be mixed with water and poured onto the topsoil or the base of the plants to deter Japanese beetles.

To create the onion mix, take one onion and chop it up. Next, let the onion sit in one and a half quarts of water overnight. The next day, pour the solution into a spray bottle of a garden sprayer and apply it to the areas where the beetles are gathering.

We hope that this post has helped explain how to eradicate Japanese beetles. Remember, these beetles can cause significant damage to your plants and crops, so it's best to keep them at bay as much as possible.

Before you go, be sure to check out our other posts:

Mealybugs On Areca Palm – What To Do?