Locating all of the critters in a garden can feel like searching for a needle in a haystack. Do you suspect there are Japanese beetles in your yard but can't seem to find them once the sun sets? Well, we've done plenty of research and have the answer waiting here for you. Let's get into it.

Although Japanese beetles may seem like they disappear at night, they only go into shallow nests beneath the ground's surface. Typically, these nests will be a few inches deep and are where Japanese beetles go to sleep through the night.

Furthermore, this beetle species tend to congregate near thick foliage, so if you have grass or a line of plants, that's a good place to check for tiny holes.

As we begin, we will cover all things Japanese beetles and discuss how to find them. Whether you have noticed damage to your plants or don't like the thought of critters in your garden, we're here to offer some help. With that said, let's dive right into this post! 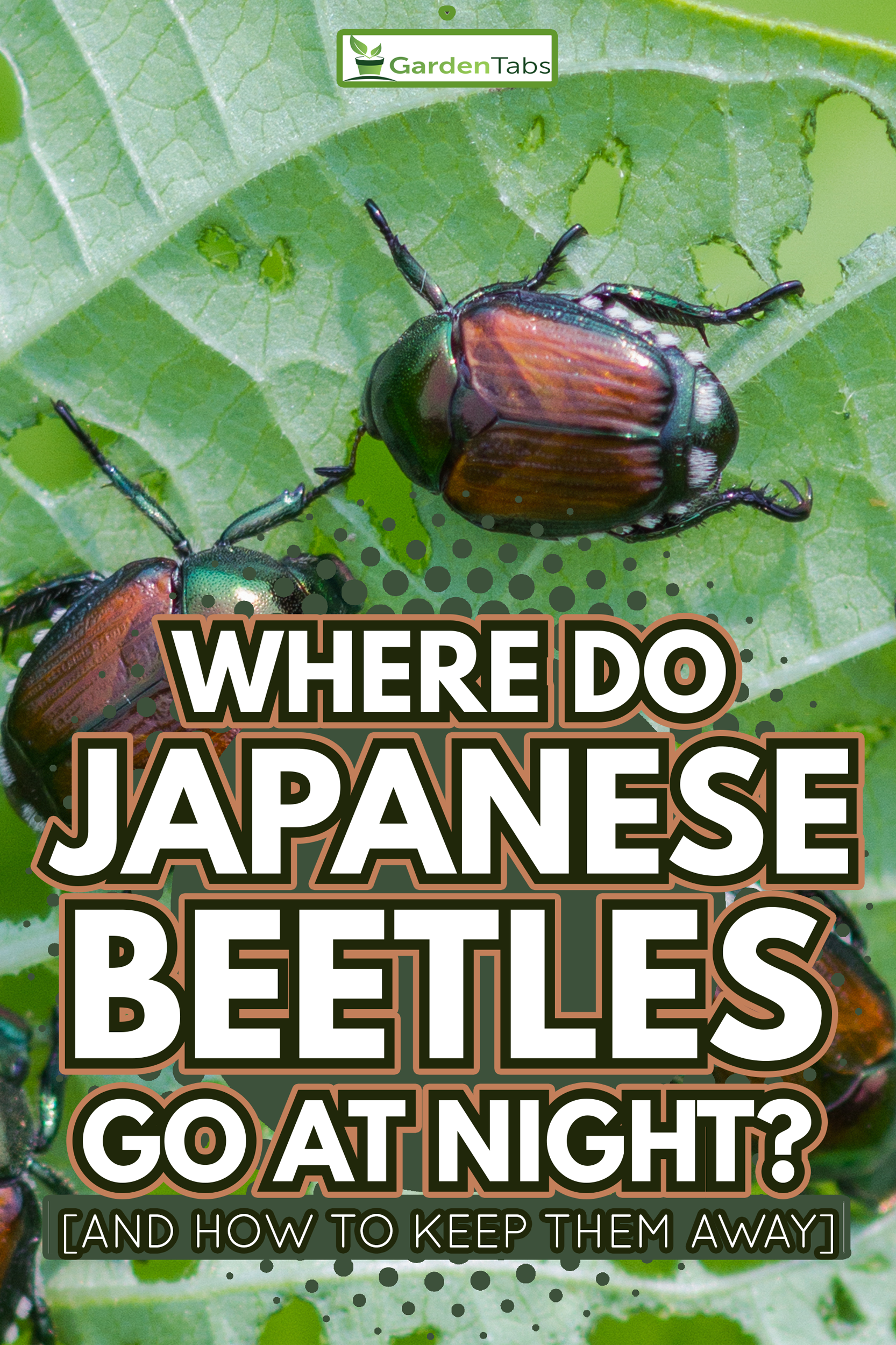 Are Japanese Beetles Active At Night?

No, Japanese beetles tend to be most active during the daytime. As we mentioned, these beetle species tend to stay in their nest through the night, typically near thick, protective foliage.

It's not common to witness Japanese beetles being active in the dark, as they eat during the morning and afternoon hours.

Of course, you may see a few here and there towards sunset, but don't expect to find any past then.

What Time Of The Day Do Japanese Beetles Come Out?

Typically, Japanese beetles will come out and be most active between nine am and three pm. This species, mainly, prefers to eat and travel during brighter hours, hence why you can't usually find them at night.

Like humans, Japanese beetles prefer to work and eat during the morning and afternoon and then make their way home to sleep through darker evening hours.

What Season Are Japanese Beetles Most Active?

Japanese beetles will be active during the summertime. This typically starts in mid-June and lasts until mid-August, when the temperatures begin to drop.

Many people think of these critters as summer bugs, so it's most common to deal with them during that timeframe.

On top of that, Japanese beetles only have a two-month adult lifespan, so you won't have to worry about the same group returning next year.

Japanese beetles tend to emerge once the temperature hits 70 degrees, although they prefer a much warmer 85-95 degrees. As we covered above, this is more of a summer species, so the hotter the climate, the more active they will be.

That said, Japanese beetles will come out into your yard more frequently if it's warm and humid. Once the humidity reaches more than 60%, this restricts Japanese beetles from flying, so they have no other option than to eat all of the plants nearby.

However, this beetle species can't survive cooler weather, so once the average daily temperatures drop below 70, you can expect to see them disappear entirely.

Where Do Japanese Beetles Go In The Winter?

In general, Japanese beetles will either die or overwinter in the soil as larvae. Once the first frost hits, the grubs will move deeper into the ground, typically 2-8 inches.

Adult Japanese beetles only live for about 60 days, which lasts through the summer, so they are no longer alive by winter.

That said, if, for some reason, an adult Japanese beetle survives through the summer, it will try to reproduce and nest with its larvae until it warms up.

Will Japanese Beetles Die If It's Too Cold?

Yes, Japanese beetles will die if they get too cold. Usually, this happens when soil temperatures drop to 15 degrees Fahrenheit or if the ground stays consistently 32 degrees.

Although this beetle species is hardy, extreme cold can lead to high grub mortality. Remember, these aren't adult beetles yet, so the most they know to do is burrow deeper into the ground.

If the weather is freezing, this can be as deep as a foot, so Japanese beetles don't give up easily. 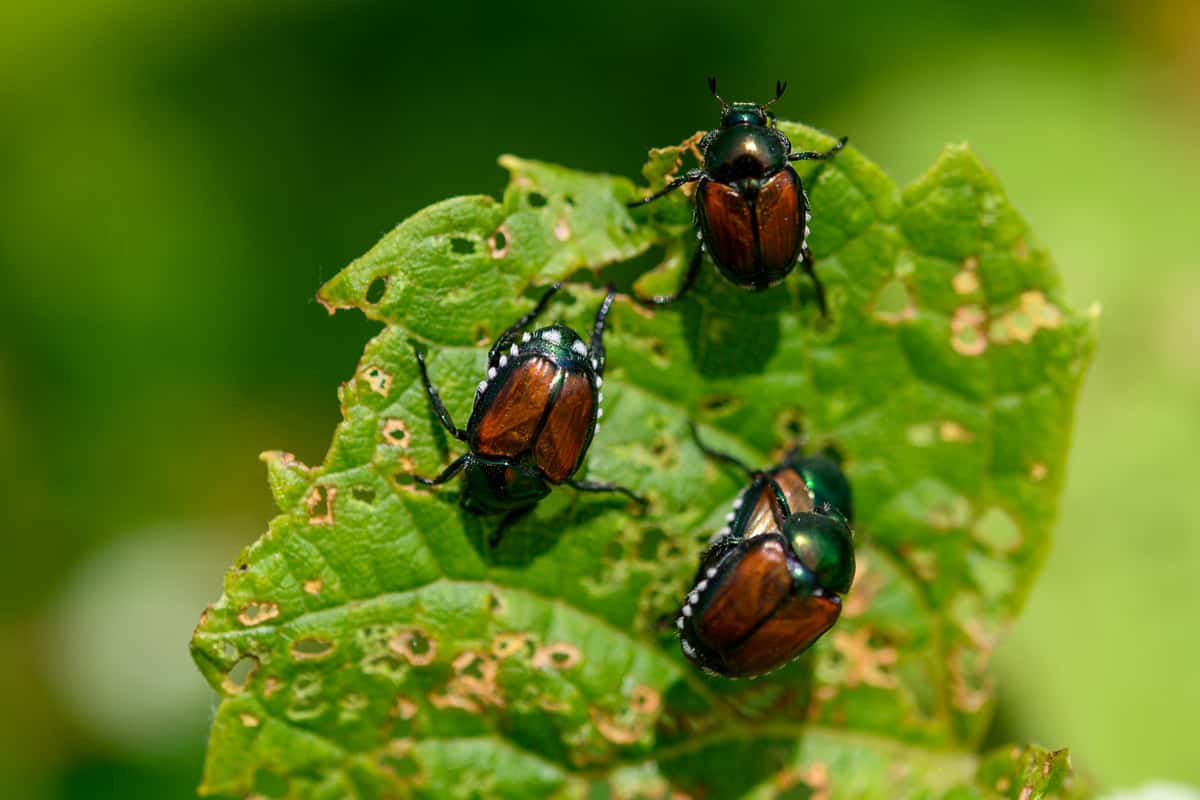 Younger beetles, grubs specifically, tend to be pests of turfgrass, resulting in a patchy lawn. This happens because they chew the roots of your grass, which in turn kills entire sections of greenery.

For this reason, many gardeners try to get rid of Japanese beetles ASAP before any damage can occur.

How Do You Get Rid Of Japanese Beetles?

If you start to notice Japanese beetles in your yard, time is of the essence. Luckily, there are quite a few ways to remove this beetle species from a location, which include:

Of course, if you don't want to catch beetles by hand, we think using a Japanese beetle pesticide is sufficient. You want to continuously use your chemical through the summer season, as this is when Japanese beetles will be most active and repopulating.

This pesticide works specifically for Japanese beetles, won't stain, is odorless, kills within weeks, and comes in a one-gallon container.

Check out this pesticide on Amazon.

What Makes Japanese Beetles Go Away? 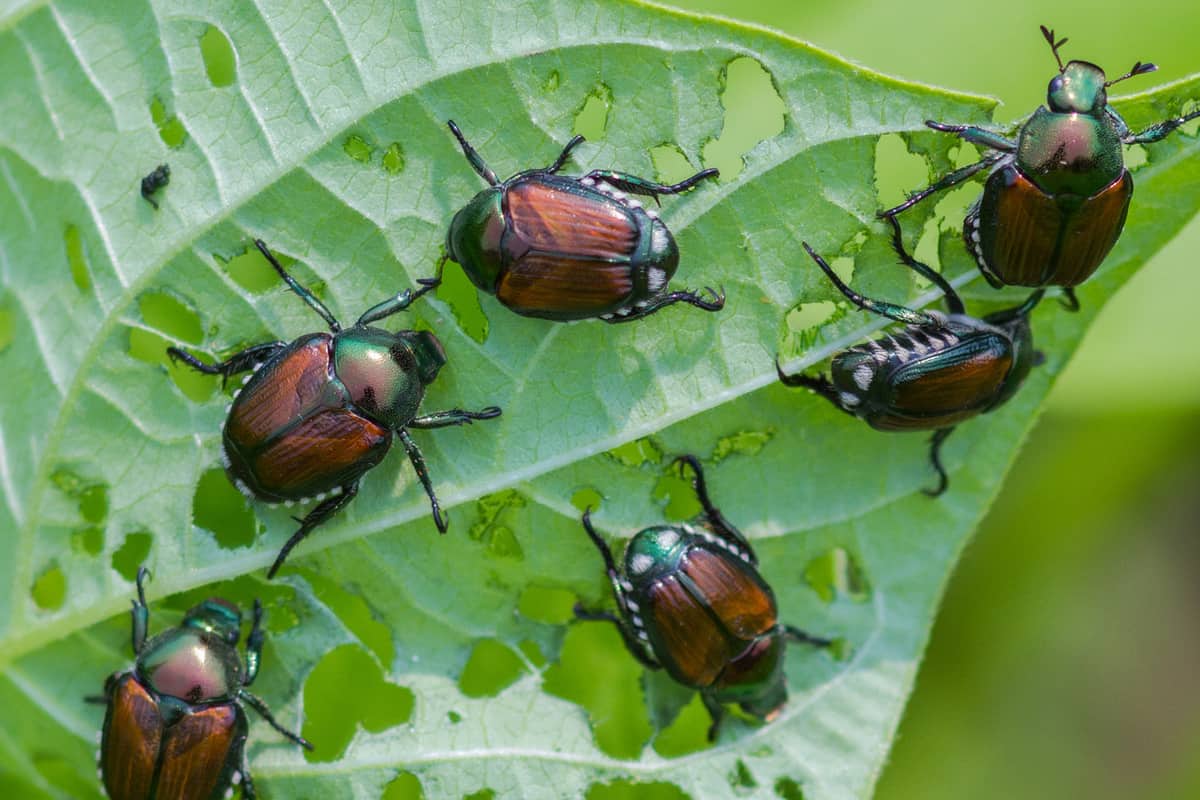 Generally, strong odors will keep a Japanese beetle away. You can try planting garlic, rue, or tansy near your affected plants, which should work as a barrier against unwanted visitors.

As we said, Japanese beetles can't stand the smell of themselves after they have died, so if you don't mind killing a few, this could be an idea to try.

Furthermore, Japanese beetles won't survive if you spray their nests with pesticides, so that's a fast way to get the job done. Some gardeners even recommend attracting birds and other prey to eliminate Japanese beetles, although this can be hit or miss.

Can You Permanently Get Rid Of Japanese Beetles?

Although it's not always possible to permanently remove Japanese beetles, you can get rid of most of them. Usually, you will want to treat this like a multi-part attack, which could take a few weeks.

We recommend starting by spraying the affected plants in your garden with a beetle pesticide/eliminating odor. This will keep the bugs off your plants while you can figure out a way to kill them.

Pyrethrin-based insecticide tends to work well for flowers, vegetables, trees, and shrubs, so that's a good idea to follow. From there, you want to locate the nests.

Once you have the exact location of the problem, use either aerating shoes or bug killer to get rid of the beetles for good.

Will Japanese Beetles Ruin My Garden?

Unfortunately, a Japanese beetle infestation will likely leave damage behind in your garden. Like we said earlier, this species eats over 300 plant varieties, so they have an extensive palette.

Generally, Japanese beetles will start with your grass and make their way to bigger plants, so it's best to stop them as soon as possible.

If not, you could end up with damaged foliage, plant loss, and even a full-blown bug infestation, so this can get serious. Again, a pesticide should do the trick, so managing Japanese beetles is very doable.

Can You Get Rid Of Japanese Beetles Naturally? 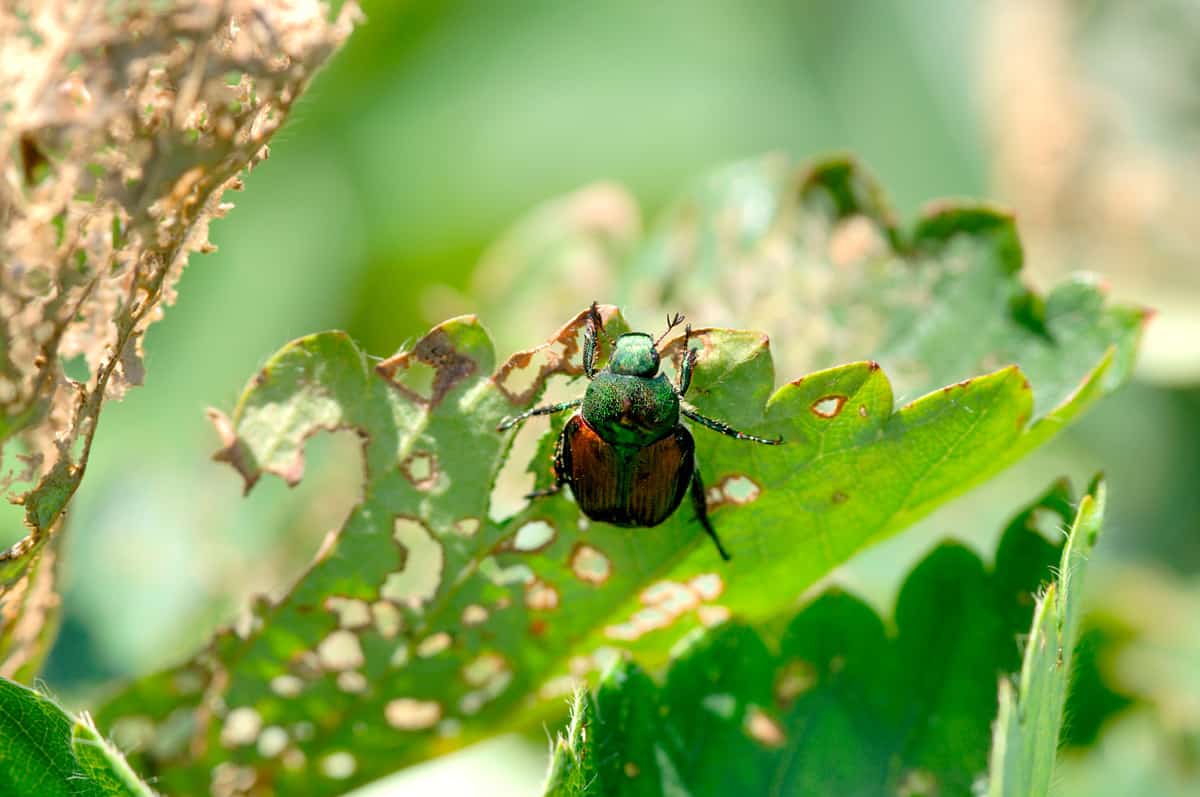 Yes! If you prefer to keep things natural, you can certainly get rid of Japanese beetles without harmful chemicals. One of our top suggestions is to use a cedar wood spray, which will keep Japanese beetles away from wherever you spray it.

Using this spray won't kill the bugs but rather repel them from your garden, so this is a great non-cruelty option to consider.

That said, you will have to spray regularly to prevent the beetles from returning, so make sure to keep a schedule going.

Whether you have a Japanese beetle infestation or are curious about them, it is important to know when they are active. From what we found, this beetle species is most active during the morning and daytime, while they tend to sleep underground through the night.

Japanese beetles tend to congregate near thick foliage and in your grass, so if you need help finding them, those are good places to start. These beetles will also eat over 300 different plant species, so if you have enough in your garden, this could mean trouble.

Regardless, make sure to keep an eye on your plants for any damage, and don't be afraid to use a pesticide near the Japanese beetle nests if issues persist.

Made it to the end? Check out these super helpful related garden posts below!

What Is Eating My Crepe Myrtle? [4 Common Pests]

How To Get Rid Of Japanese Beetles On Roses