Choosing new plants to grow in your garden can sometimes require additional research. For example, do you want to plant wisteria in your yard but have no idea whether its roots are invasive? Does this vining plant tend to be more aggressive in the ground?

We will answer these questions and many others throughout this article. Let's dive right in!

Yes, wisteria does generally have invasive roots. Since your plant's root system will sprawl in every direction, it's likely to see some invasive behavior if there are other plants nearby.

Furthermore, we don't recommend planting wisteria near a structure or sidewalk, as these invasive/aggressive roots can cause significant damage.

As we start, we will cover all things wisteria and discuss whether this vining species is invasive or not. If you're new to wisteria, need guidance for a fast-growing plant, or are simply curious, we're here to offer some help. With that said, let's explore this topic below! 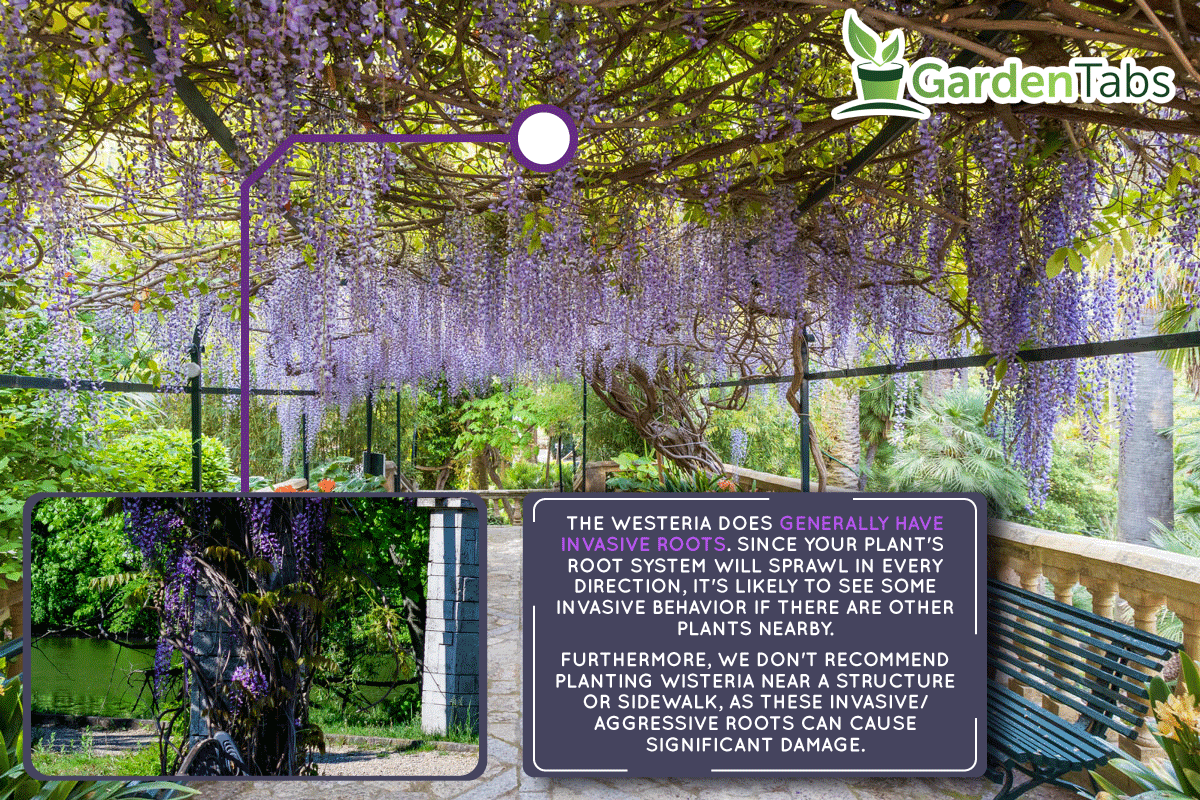 Will A Wisteria Be Invasive?

Yes, you can usually expect a wisteria plant to grow rather aggressively. Although this vining species is gorgeous, wisteria has highly invasive root systems that can wreak havoc on plants nearby.

One of the more common varieties, Chinese wisteria, is reported to be invasive in at least 19 states, mainly centered in the eastern United States.

So, if you've ever wondered what the beautiful yet aggressive, purplish-white vine is in your garden, there's a big chance it's wisteria.

You want to remember that wisteria is technically a vine. Therefore, its roots sprawl just as much as its foliage, which can be great in some cases, but devastating in others.

Specifically, wisteria spans from states like Massachusetts to Illinois south to Texas, so you're likely to see it just about everywhere.

Considering it will have invasive tendencies, we don't recommend planting wisteria near other trees, shrubs, and flowers, as it can take over the soil. 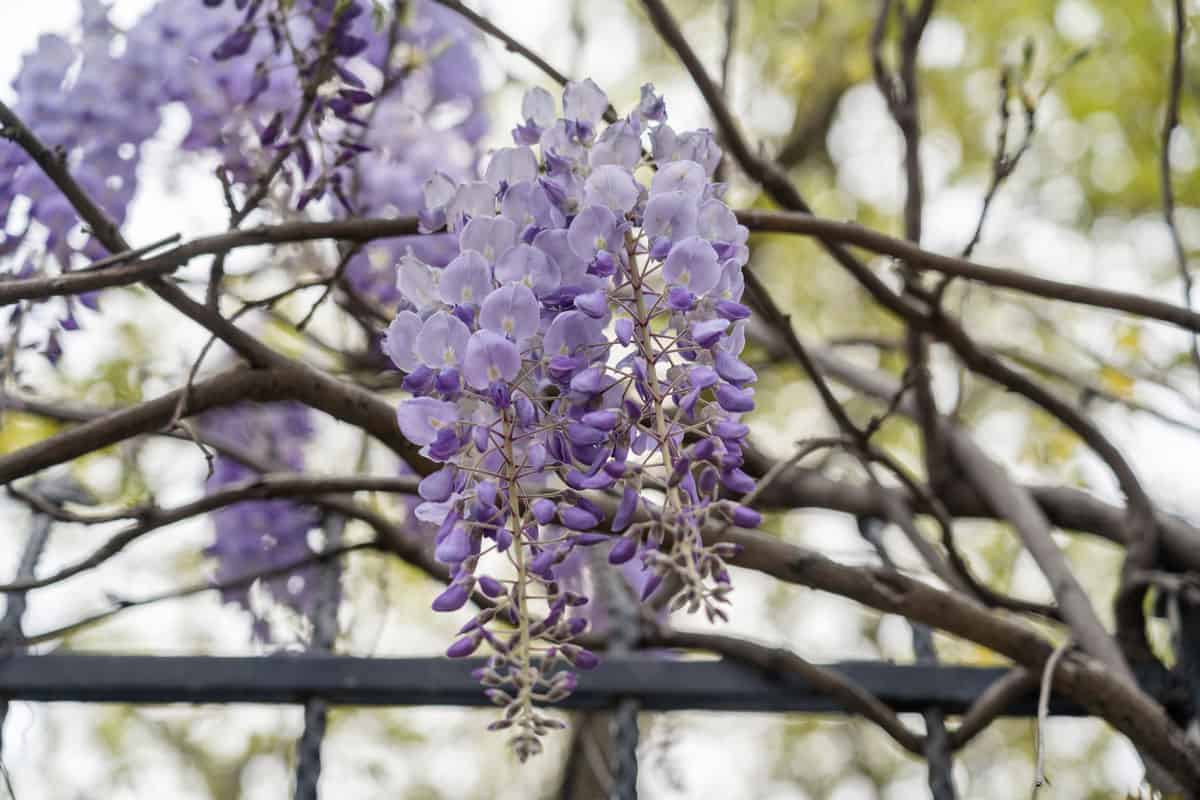 How Big Do Wisteria Roots Get?

In general, a wisteria's roots will span about 2-3 feet into the soil. However, as your plant sprawls, its roots will likely follow, sometimes becoming ten or more feet deep.

Wisteria is a heavier vining species, so it depends on its roots for stability. Therefore, the bigger one gets, the deeper and denser its roots will need to become to support it.

Another factor to consider is how much a wisteria's roots will sprawl. Depending on the size and age of a plant, it's common for one's roots to become quite wide and deep in the soil.

Therefore, we don't recommend planting wisteria near a sidewalk, wall, or structure to prevent cracking.

Some experts even recommend inserting a root cage/blocker into the soil, so your wisteria roots can't overpower the entire plot of land.

However, if you train one to grow upwards using a trellis, your plant may not require such an expansive root system, so that's an idea.

This trellis is made with durable vinyl material, weighs 36 pounds, measures 54 x 2 x 90.37 inches, is easy to assemble, includes a 20-year warranty, and has great online reviews.

View this trellis on Amazon.

Why Is Wisteria A Problem?

Wisteria becomes an issue in your garden mainly because of its growth pattern. Like many vines, this species tends to overpower plants nearby and can cause structural damage with its roots.

As we said, it's likely to see a more mature wisteria's roots become upwards of ten feet deep, which isn't always ideal for trees, shrubs, and flowers nearby.

In addition, having such an expansive root system can affect the pipes and any other underground foundation/system your home has.

According to the University of Florida, wisteria can also become an issue for native plants, as it will climb into the canopy of trees or plants.

As this happens, the wisteria blocks the sun from reaching anything below, leading to plant loss. Although this may not seem bad, losing native species to wisteria is becoming an increasingly common problem.

So, to prevent this, try and give your wisteria its own space away from others. 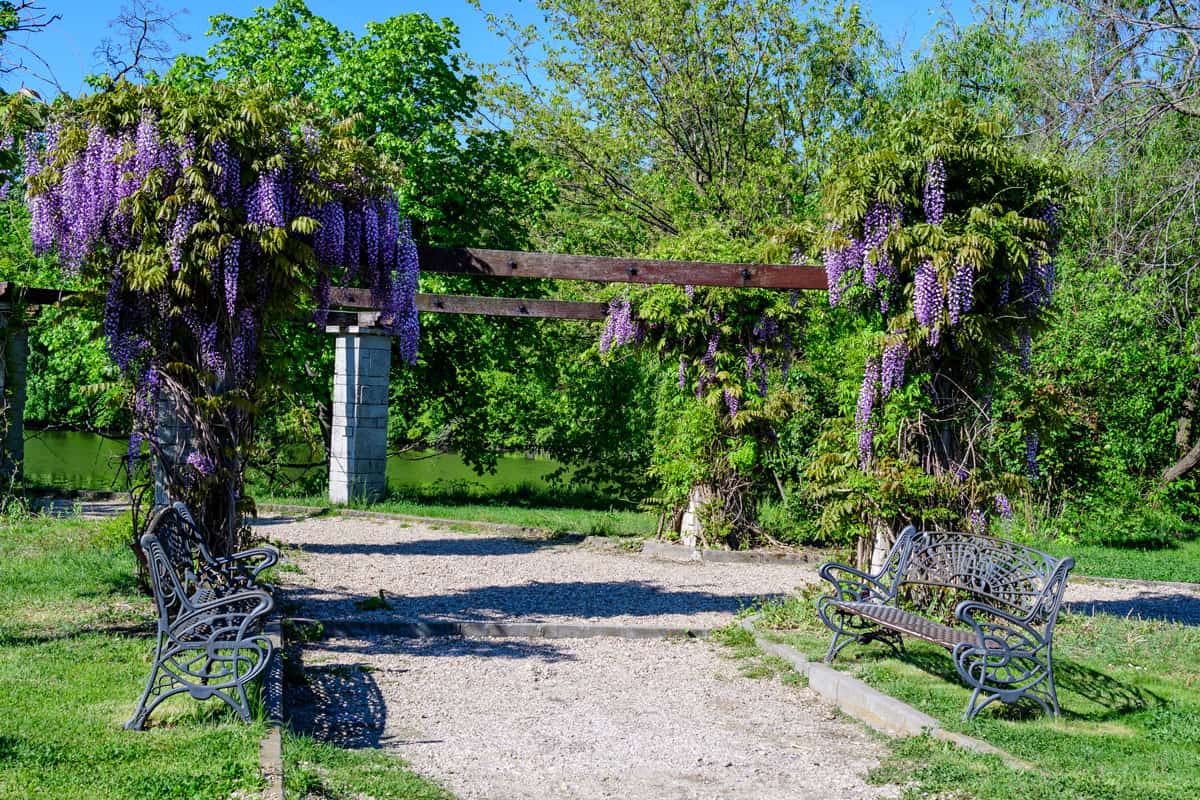 How Do You Stop Wisteria Roots From Spreading?

The best and most effective way to stop a wisteria's roots from spreading is to prune it regularly. Ideally, you want to do this twice yearly, although you should be okay with it once.

Specifically, you want to cut down your vining plant once its flowers fade in early to mid-summer.

According to experts, you may also prune a wisteria whenever its foliage appears "unruly," so that's another indicator your plant needs a haircut.

Another way to handle a wisteria's rapidly spreading roots is to perform a cut stump treatment. This is when you cut down the branches/foliage of a wisteria if it has two or more central stumps.

For example, if your vine has two main growth spots, cut down one of them to its base and apply an herbicide to the stump to kill the roots.

Although this sounds aggressive, your other side/stump should be okay through the split, so there's no need to panic.

Of course, this shouldn't be your first option, as you can typically train a wisteria to grow from one stump in a specific direction.

Can You Plant Wisteria Next To A House? 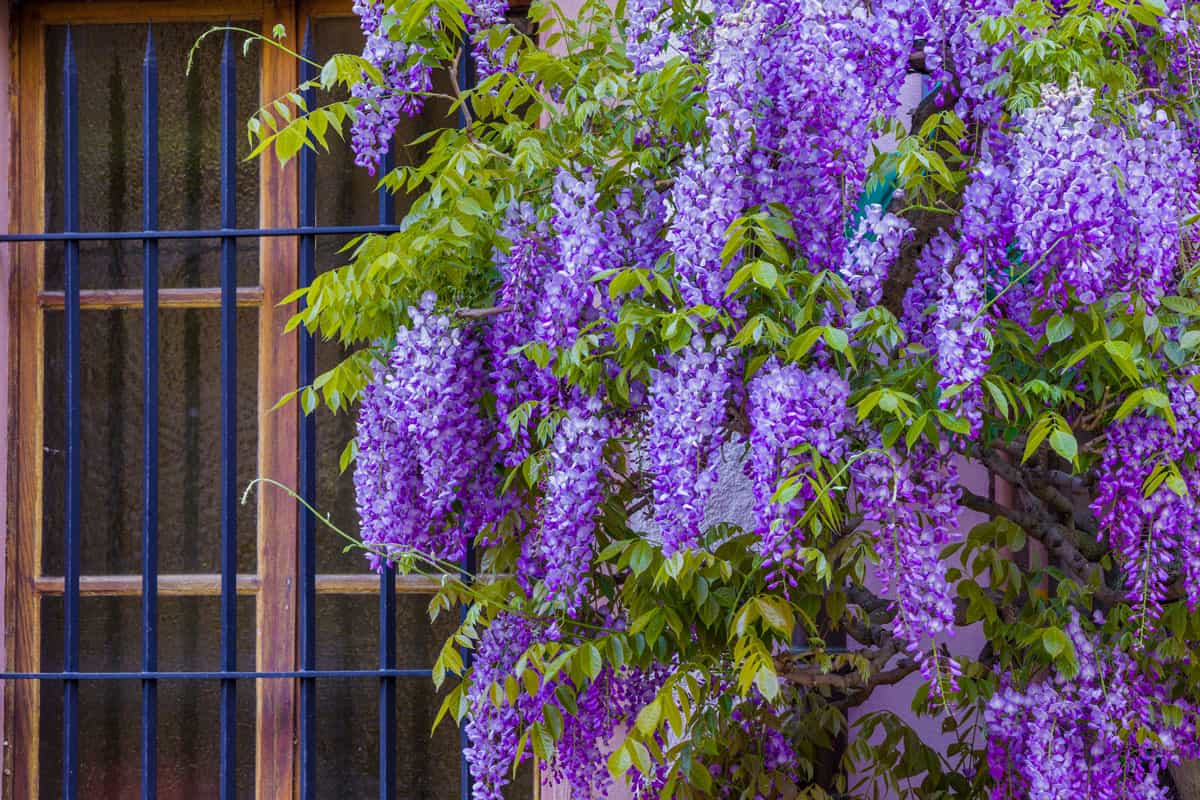 Although it's safe to plant a wisteria near your home, we don't recommend having it too close. As we mentioned earlier, wisteria roots are aggressive and can become very wide and deep.

Since your house likely has pipes and other important systems/networks beneath it, you don't want your landscaping to become a major issue.

With that said, we recommend planting wisteria no closer than six feet to your home's foundation. That way, the chances of something happening are less likely.

Additionally, you might want to train wisteria using a trellis or other structure to grow vertically, which can sometimes help control the root size.

The key here is giving your wisteria independence from other plants and structures.

Although this isn't too common, a more mature wisteria's roots can make their way into your piping.

Remember, it's normal for wisteria to sprawl above and below the ground, so if yours is too close to pipes, there is a chance it will try and overpower them.

However, pipes can usually withstand other in-ground disturbances, so this isn't something you need to worry about necessarily.

Regardless, we recommend keeping wisteria six or more feet from your house/any major structures, so keep that in mind while planning.

Is Wisteria A Tree Or Shrub?

Technically, a wisteria is neither a tree nor shrub but instead a deciduous vining plant. However, you can train wisteria to grow as a shrub or tree, so that's why there tends to be confusion.

One of the more common ways to grow wisteria is vertical, using a trellis. This plant looks gorgeous hanging from a pergola or archway and should produce stunning flowers through the spring and summer months.

Remember, this vine is fast-growing and has an aggressive/invasive root system. It's normal for wisteria to become upwards of 30 feet long, so make sure you have enough space before deciding to plant one.

You may also prune one to remain a specific size, although you'll need to do this routinely. The easiest way to manage wisteria is attaching it to a structure and then allowing it to spread across.

So, when in doubt, turn a pergola, trellis, or archway into a stunning wisteria canopy.

How Big Will A Wisteria Plant Get?

For those wanting to know how much space to give their wisteria, this should be plenty. Typically, wisteria can grow to 30 feet tall, so these plants certainly require idle room to sprawl out.

However, some wisteria plants only reach about ten feet at their mature size, so this can be different for everyone. As we covered, you can train a wisteria to grow vertically, so if you want a tall vine, we recommend training yours upwards.

In contrast, if you don't want such a massive plant in your landscape, it's possible to shape wisteria into more of a decorative shrub, although routine pruning is necessary.

Regardless, you want to give your plant space to grow and thicken out, as this species tends to overpower anything in its way. 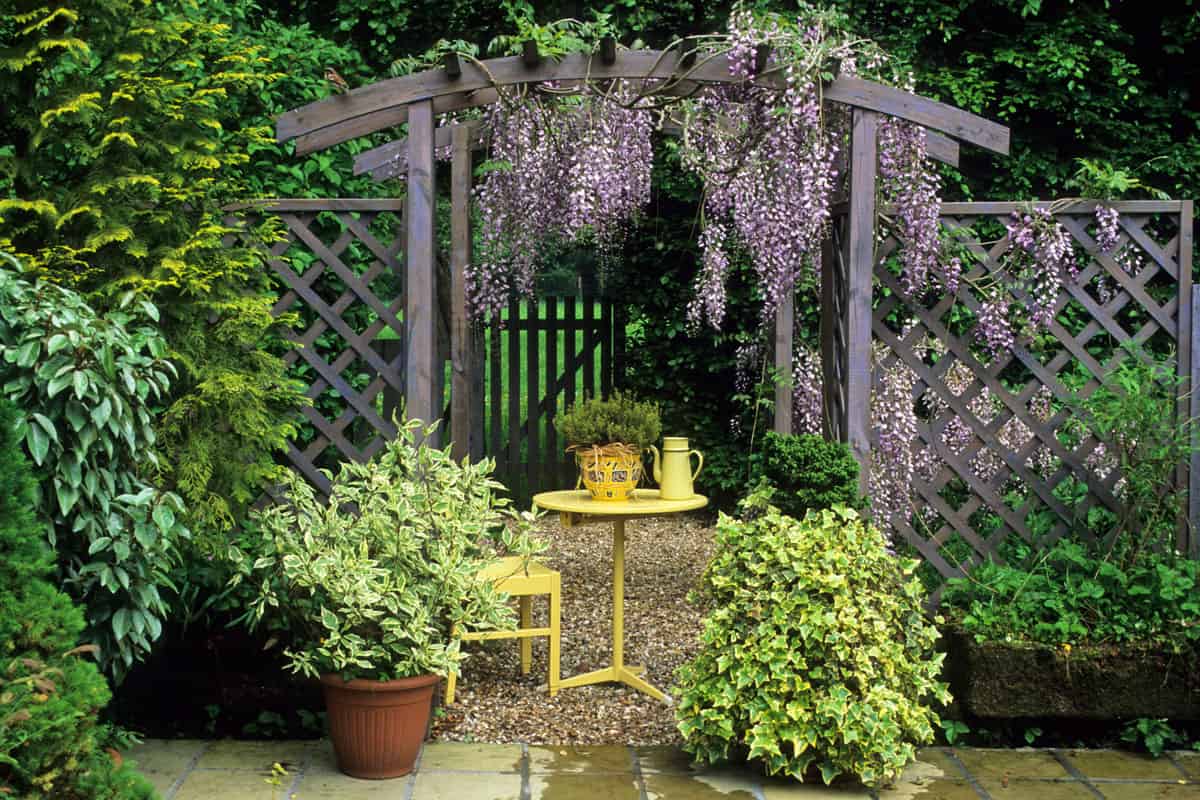 Yes, wisteria lives for long periods if they have the right conditions. Specifically, many gardeners see their wisteria vines live upwards of 50 years, which is lengthy for the type of plant we're talking about.

To create ideal conditions for wisteria, you want to start by giving your plant plenty of sun. So, if your garden has an open, full sun location, this is perfect for wisteria.

In addition, you want to keep the soil around a wisteria moist during the spring and summer. As we mentioned, this is when your vine will bloom and grow the most, so plenty of water is appreciated.

It's also worth noting that wisteria does well with regular pruning, which can help prevent them from invading other plants' spaces. 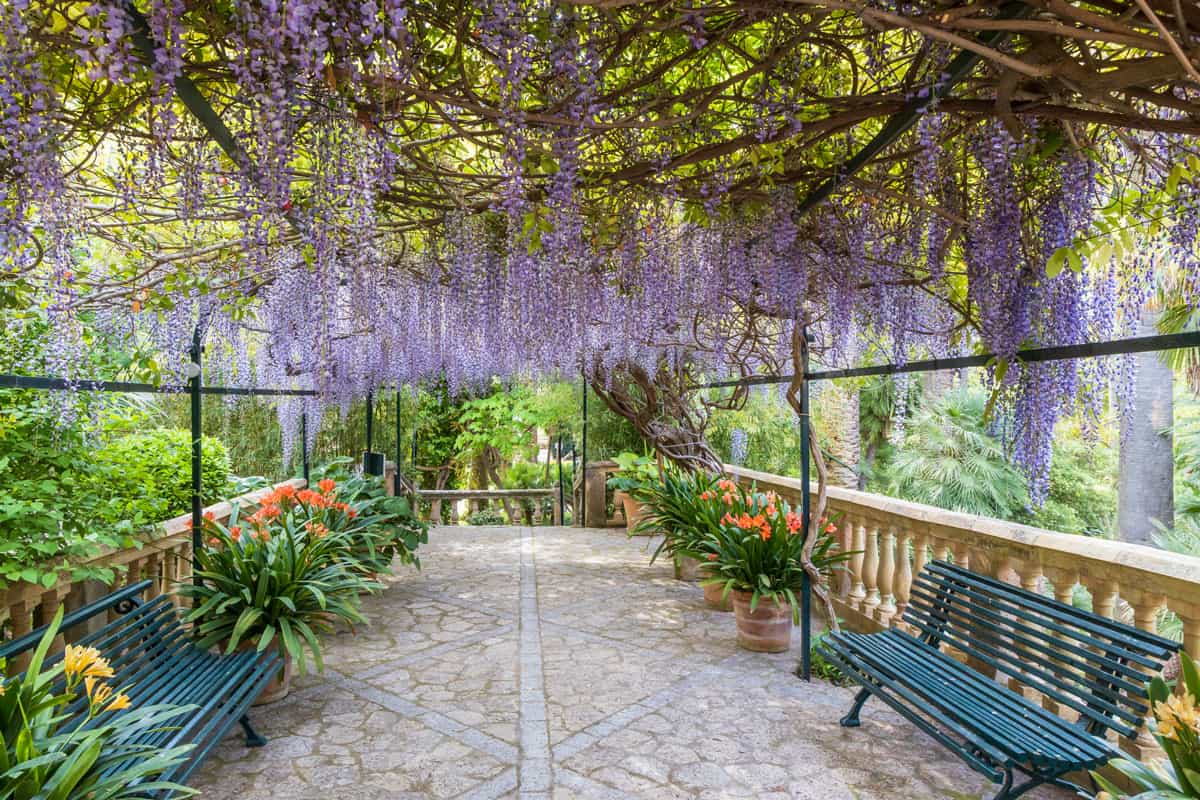 Whether you have wisteria or want to grow one, giving them enough room is always good. From what we found, this vining species is invasive and has relatively aggressive roots.

Considering their roots can become ten feet deep, spacing wisteria out is essential. Regardless, give your wisteria a regular pruning, and don't be afraid to perform a cut stump treatment if things get out of hand.

Made it to the end? Check out these helpful related plant articles below!