Follow the historical roots of the palm tree and you’ll soon discover that humans have been harvesting, transporting, and cultivating palms for thousands of years.

Palm varieties have become an integral part of many diverse cultures throughout the world. We use the fronds and fruits produced by palms for food and shelter. We attribute symbolic meaning to palms, incorporating the fronds into significant religious, astrological, and victorious celebrations. Indeed, the palm reaches out to touch all realms. But, where are palm trees originally from? We’ve researched the history of several palm varieties to find the answer.

The lineage of palm trees has been traced to regions of India, Northern Africa, regions of Southeast Asia, and the South Pacific Islands.

Palm origins will vary depending on the species. The genetics of Coconut Palms, Cocus Nucifera, seem to be split between two opposite origins, Indo-Atlantic and Pacific. The ancient Date Palm, Phoenix Dactylifera, has both genetic and historical relevance tracing its origin to Egypt. But, with such geographical diversity among the palm species, where can palms grow? We found the answer based on the palm’s ideal climate.

Palms are found sprawling through vast regions of the Americas, India, Japan, Asia, Australia, and the South Pacific Islands. Particularly abundant between latitudes 30° N and 30° S, palms prefer tropical and subtropical climates. Hardier palm varieties push the limits of cooler and hotter climates by extending as far as between latitudes 44° N and 44° S.

Are Palm Trees Native To America?

Native plants are indigenous to the area in which they grow. A majority of the palm species found throughout America are not naturally occurring but have been transported, either intentionally or accidentally, by humans and animals.

Given the right climate, non-indigenous palm species, such as the Coconut Palm, continue to thrive throughout the southern regions of North America and have since been cultivated for the purposes of food, oil, crafts, and landscaping.

Palm Trees in the Continental US

Yet, within over 2,500 species of palms worldwide, 13 species are actually native to the continental US:

A palm with Pacific origins of the genus Pritchardia (commonly Loulu), consists of 19 different species that are native to the US Hawaiian Islands including the most commonly found:

Pritchardia palms are large trees, growing to heights of a minimum of 20 feet to a maximum 60 feet tall depending on the species. Feathery, fan-shaped leaves are silvery beneath and the species produce flowers and fruit. The fruit of the Pritchardia Affinis and Pritchardia Madeniana (both commonly Kona) species is edible.

Some other Pritchardia palms are native to the Hawaiian Islands, and many of these palm species are now becoming endangered species.

Where Do Palm Trees Grow Naturally In The US? 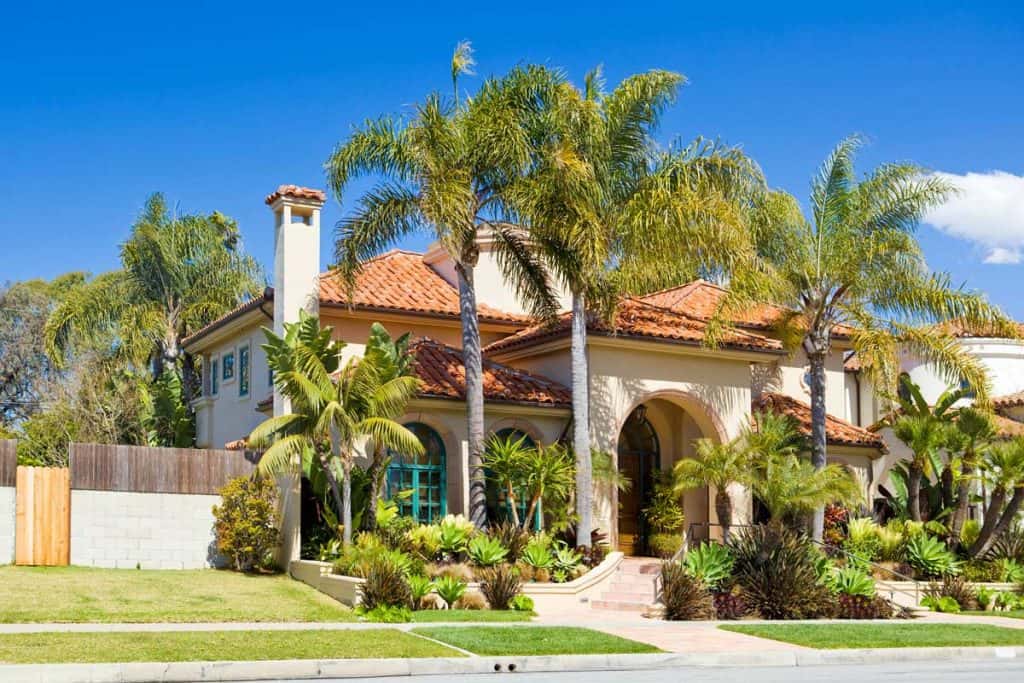 Palms grow comfortably in the USDA Hardiness Zones 12a - 13b. Hardy palms that can withstand cooler, seasonal temperatures, extend their growing area to include USDA Hardiness Zones 8a to 11a. In the continental US, palms extend as far north as the Carolinas and as far west as  Southern California. Palms native to the US thrive in the states of Georgia, Florida, Louisiana, Texas, Arizona, California, and Hawaii.

What US City Has The Most Palm Trees?

When it comes to an exact canopy count, it’s difficult to get an accurate number of palm trees per city. However, there are several cities that top the list as having plentiful palms.

In Florida, any city street, boardwalk, or metropolitan yard is surrounded by palms in the landscaping. Miami does not stand alone, however, as one of Florida's iconic palm tree cities. Orlando and Jacksonville host a wealth of palms.

In southern Texas, the cactus is not the only plant species thriving throughout the landscape. The city of McAllen has been deemed the “City of Palms” for naturally occurring palm species. Yet, Houston hosts three of Texas’ native palms; Dwarf Palmetto, Mexican Palm, and Texas Palmetto.

Who doesn’t think of Los Angeles when you think about cities when palm trees? L.A.’s iconic California Fan Palms line the boulevards, especially in Beverly Hills. But, San Diego comes in a close second for palm-lined streets even though the commonly spotted Queen Palms Syagrus Romanzoffiana are not a native species.

Nearly every breathtaking view in Hawaii has a palm tree, and the variety of palm species found in Honolulu is no exception. You’ll see fabulous fans of the non-native Traveler’s Palm Ravenala Madagascariensis and beautiful Bottle Palms Hyphorbe Lagenicaulis adorning landscapes throughout the capital city.

What Is The Street With All The Palm Trees In LA?

The next time you visit L.A. take a drive or stroll down Windsor Boulevard. Pause between 4th Street and 5th Street and you’ll not only have an excellent view of the HOLLYWOOD sign in the distance but, also a great photo opportunity for that iconic, Beverly Hills palm-lined selfie.

Are Palm Trees Native To The Middle East?

Probably the most antiquated palm in the world, the Date Palm Phoenix Dactylifera, is a species native to the Middle East. The Date Palm originated in modern day Iraq. It has been highly successful at spreading throughout the world due to its economic value and its ability to survive extreme temperatures.

Where Do Date Palms Grow?

Date Palms prefer arid climates, with low humidity and temperatures ranging from as low as 20°F and as high as 95°F. Palms are grown and cultivated in Pakistan, India, Northern Africa, the Canary Islands, Mexico, and the United States.

Numerous palm species have spread far and wide. Palms will continue to intrigue and provide functional purpose to humans throughout tropical and sub-tropical climates worldwide.