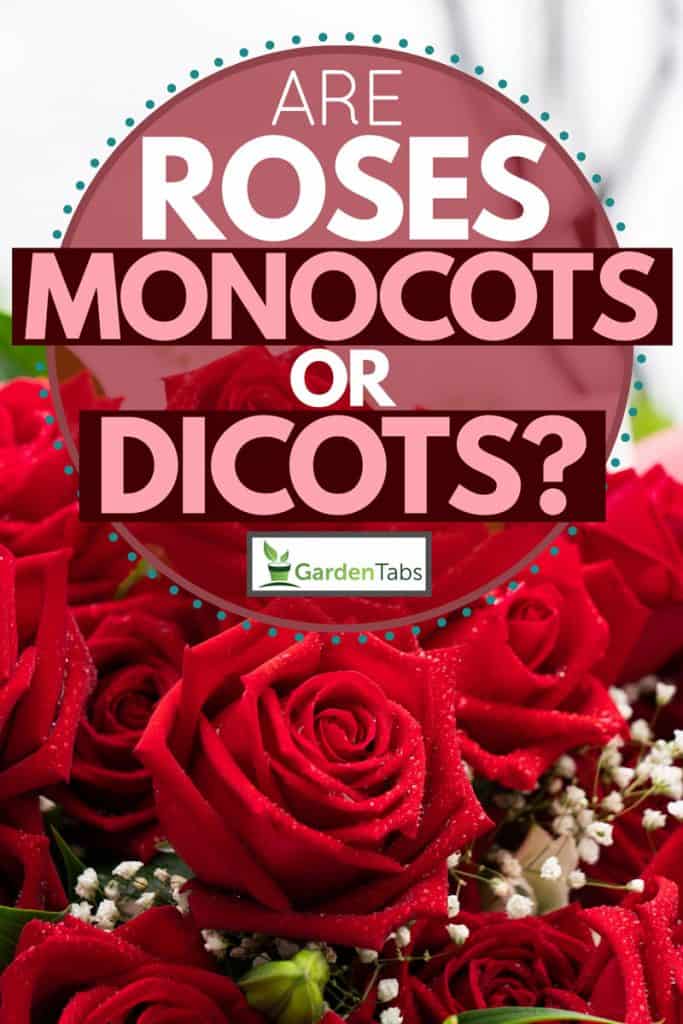 When it comes to flowering plants, there are two main divisions- monocots and dicots. Both systems have their advantages and disadvantages. About 22% of flowering plants are monocots, while 75% are dicots. There are a few flowering plants that do not belong in either group. So, what group are roses in?

Let's take a closer look at monocots and dicots and their identifying features.

What are Monocots vs. Dicots?

When starting plants from seed, the cotyledons may be the first thing you see emerge from the soil. This is especially prominent in beans, which are dicots.

This plant is also developing its next leaf, usually called a true leaf. True leaves are generally more developed and look different from the cotyledons. You can see that this bean's true leaves have netted veins, which are also a distinctive characteristic of dicots.

Roses come from the Rosaceae family, which has several notable dicots like apples, plums, and cherries. All plants in the Rosaceae family are dicots. There are also a variety of characteristics that make roses distinctively dicots.

Roses have netted veins in their leaves, which is probably the most easily identifiable characteristic. Like beans and all other dicots, roses also have two cotyledons. While it may be hard to count on some rose varieties, dicots also all have flower petals in twos or multiples of four or five. So your roses may have ten or 16 or even 256 flower petals, but it won't grow to have nine petals.

Another less than obvious dicot characteristic that roses have is in their stems. Next time you cut a rose, take a look at the vein structure in the stem. The vein structure on dicots is always in an organized ring towards the outside of the stem. Some dicots may even have hollow stems.

Roses share all the major defining characteristics of dicots.

Other Monocot and Dicot Examples

Daffodils, corn, asparagus, onions, and tulips are all common monocots. Like with dicots, the leaves are the easiest way to identify mature monocots. Monocots have leaves that are parallel. You can see the veins in the leaves of this tulip and how they run parallel to each other. This gives most monocots a blade-like leaf.

Another prominent example of this leaf structure is most varieties of grasses. If you take a look at a blade of grass, you will see the parallel vein structure that is distinctive to monocots. Because grasses flower, they are angiosperms and are generally categorized as monocots.

While you cannot tell from the above tulip picture, monocots most often have flower petals in threes or multiples of three. Tulips, in particular, often have six or nine petals.

Because of their leaf structure, monocots are also mostly herbaceous, with less of the plant being woody or flowering. Likewise, they tend to grow more vertically than bushy.

Monocots also often have advantages roots. So the roots are more shallow in the soil and rarely develop taproots.

Magnolias, geraniums, and apples, which are in the same family as roses, are dicots. If you see a plant with a woody stem, it is likely a dicot. The ringed vein structure of dicots allows them to become woody, which is part of the reason around 75% of plants are dicots.

The main characteristics of dicots are:

For some more information and examples, check out this article on dicots and 11 examples.

Curious about the other 3% of plants that are not dicots or monocots? They are often called basal angiosperms, and they are not all that rare. Chances are you have seen a number of them before. The most prominent members of this group are varieties of water lilies, marigolds, and magnolias.

Flowering plants in this group are generally primitive and are believed to evolve before dicots. They have characteristics from both dicots and monocots, which is why they do not neatly fit into either category. They often have flattened or fused stamens. Their vascular structures are not as well developed as either monocots or dicots.

Want more information about roses? Check out these other informative articles.

Do Roses Need Sun or Do They Grow in Shade?

11 Types of Knock Out Roses