Adding new plants to your landscaping can be tricky without all the correct information. Do you want to plant a weeping willow but don't know whether or not it can sit in standing water? Does this tree species prefer wet or dry soil? We'll answer all of these questions below!

Although mature weeping willows may be able to withstand sitting in standing water, you don't want to plant one in these conditions.

Generally, willows need dry soil from time to time, especially during their formative first few months in the ground.

Ideally, you will plant your tree with good drainage and somewhat loose soil so that air can circulate.

As we begin, we will cover all things weeping willows and discuss how to plant/grow them properly. Whether you're new to this species or have a weeping willow in your yard, we're here to offer some helpful insight. With that said, let's dive right into this topic! 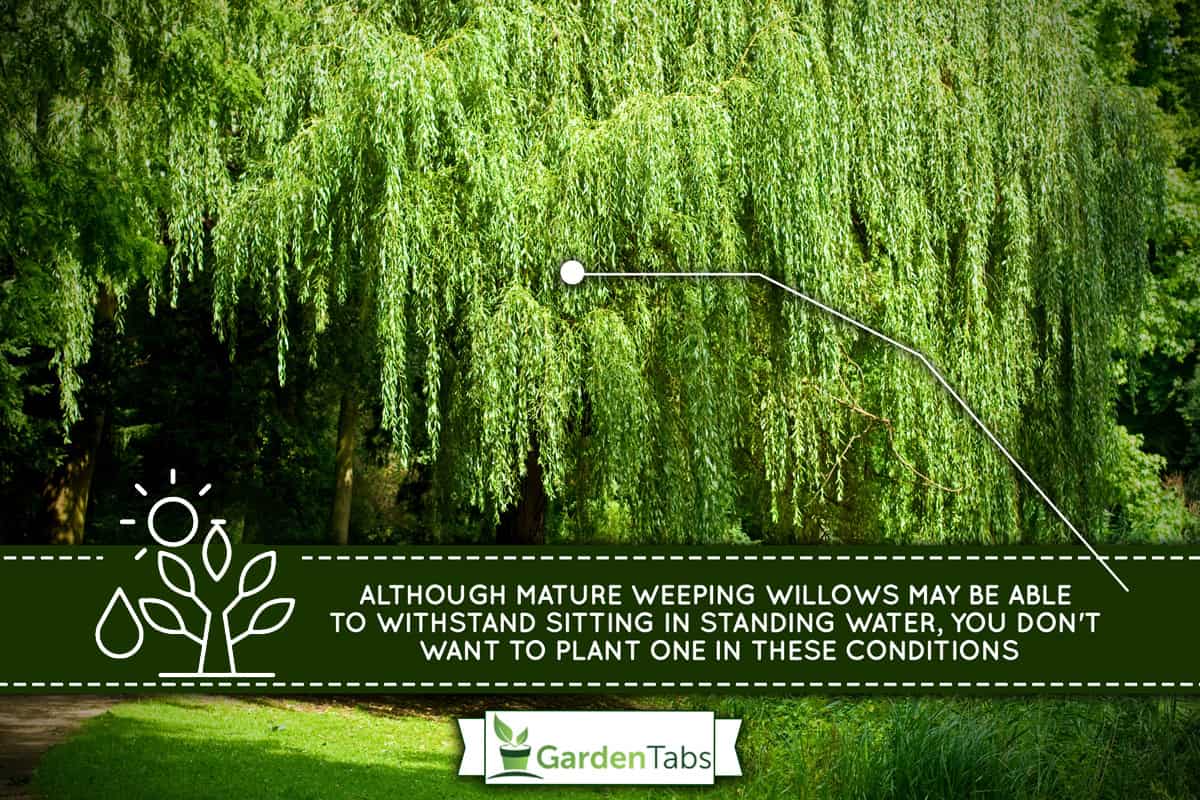 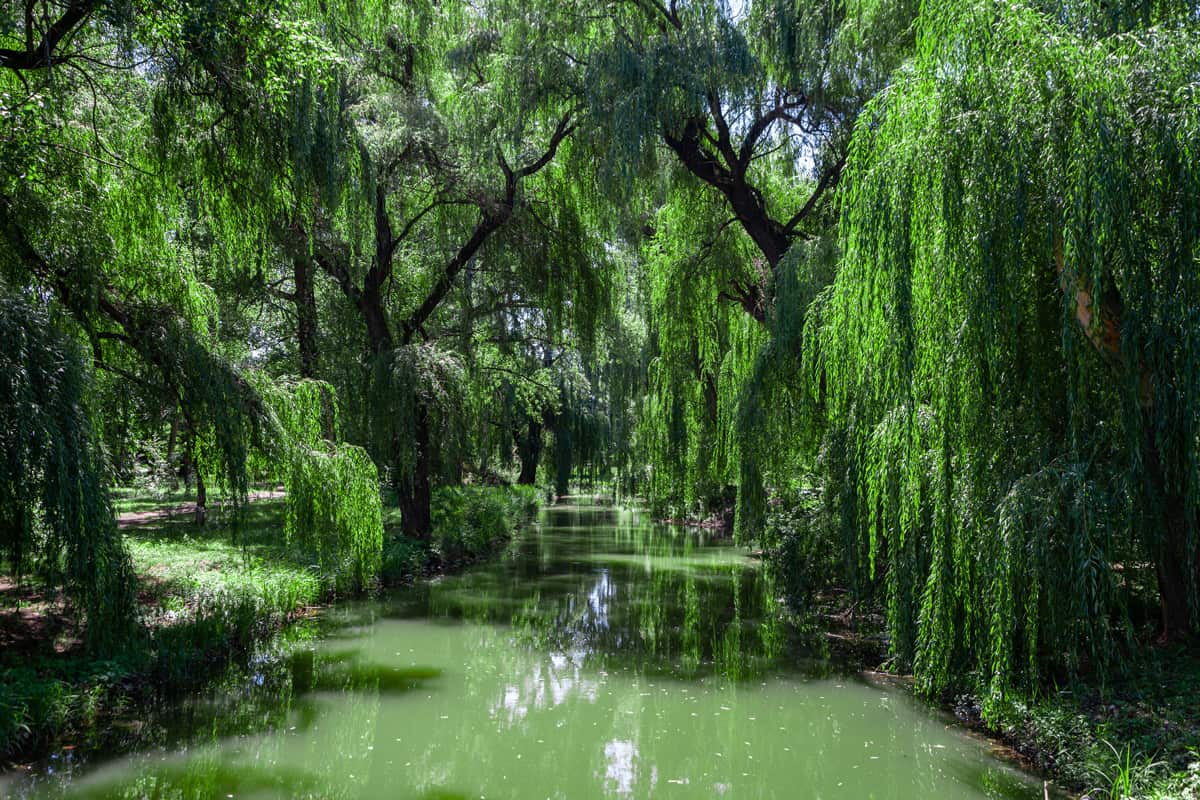 A weeping willow can generally adapt to various soil conditions, including wetter grounds. However, you don't want to plant a new willow in standing water or highly moist dirt, as this isn't good for its root development.

You may find these trees growing near streams or ponds where the soil is particularly moist, hence the confusion.

Again, you don't want to do this in your own backyard, as weeping willows aren't always accustomed to high water levels.

Another interesting fact about these trees is they absorb water very well. That means if you have a body of water on your property and plant enough willows nearby, they could drain that feature.

Over time, weeping willows have adapted their roots and leaves to absorb more water than regular plants, but that's not to say growing them in extreme conditions is beneficial.

What Happens If I Plant A Weeping Willow In Standing Water?

If you decide to plant a weeping willow in standing water, expect a lackluster tree. As we mentioned, willows respond well to sitting water when they're more mature/established.

So, putting a brand new tree into so much moisture can send it into shock. Therefore, it's best to plant your willow somewhere with good drainage.

That said, you don't necessarily have to avoid ponds or water features, but try and give your weeping willow some room to grow and develop on its own.

Many experts suggest testing the ground for moisture before planting, so that's a good plan to follow.

This moisture reading meter works without batteries, has an easy-to-read design, is seven inches, and has great online customer reviews.

Follow this link to see it on Amazon here.

Yes. It is possible and common for wild weeping willows to grow in standing water. Considering their large, far-reaching root systems can travel through the wet and dry ground, these trees are incredibly resilient.

Additionally, weeping willows absorb a ton of moisture from the soil. For example, some gardeners will strategically plant these in flood-prone sections of their property so the ground doesn't puddle after a heavy rainstorm.

Again, it's also common to see these trees growing near ponds, streams, and lakes in the wild, so they're no stranger to moister conditions.

With that said, you don't want to have a weeping willow sit in water forever. If your tree absorbs as much moisture as it can and is still engulfed in water, this is when root rot will begin to occur.

Even with its natural resilience to excess water, your weeping willow can only take in so much.

How Long Can A Weeping Willow Sit In Water?

Generally, a weeping willow can tolerate standing water for weeks or months on average. As we covered above, you'll likely see this species growing next to larger bodies of water, so they're constantly dealing with moister soil.

However, you don't want to have a weeping willow sit in a puddle of water for long periods. For example, if it rains hard, your tree will work to absorb the water nearby.

This can take a few days or even a week. Again, this will eventually dry up, allowing oxygen to travel through the ground and into your willow's root system.

If your garden has poor soil drainage and your weeping willow constantly sits in puddles, this is when health problems can arise.

You want your tree to have the best of both worlds (dry and wet ground), so avoid smothering it in moisture.

It may even be worth adding compost, sand, and gravel to the soil around a weeping willow if you have drainage issues, so keep that in mind.

What Is The Difference Between A Willow And A Weeping Willow? 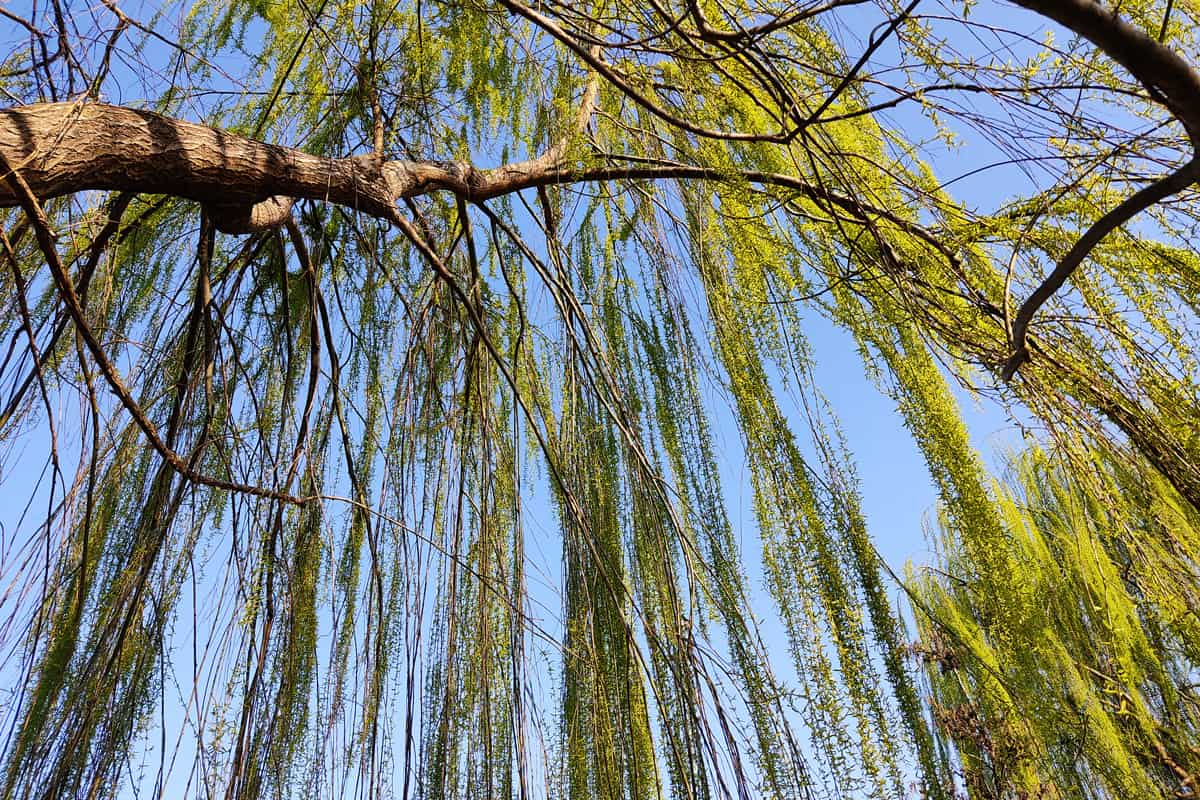 The main difference between willows and weeping willows is their growing pattern. Even though all willows (weeping or not) are considered willows, they don't all "weep."

Known for their curved or drooping branches, weeping willows have a distinct look. On the other hand, regular willows will share similar traits but won't have such dramatically curved branches.

Weeping willows are also incredibly wide. According to experts, they are one of the few willows that can reach massive sizes, hence their popularity among gardeners.

However, all willows do love water. Even if your tree isn't weeping, it's likely to enjoy a bit of soil moisture, so they're very similar in that respect.

What Is So Special About Weeping Willows?

Besides having almost "weeping" branches and foliage, these trees are also quite stunning in color. They make up a round canopy of almost silver-tinged leaves, which is certainly unique.

These magnificent trees are also home to many creatures, including rabbits, deers, and nesting birds. So, besides their physical beauty, they also play a significant role in the food chain.

Where Do Weeping Willows Originate?

The weeping willow originally comes from China. This tree has made its way around the globe through the silk road to Europe and ultimately to North America.

With that said, willows have become their own staple here in the United States, having roughly 40 species native to New England alone.

Like many ornamental trees, gardeners from across the globe buy and sell these gorgeous trees and plant them in their gardens for all to see.

This tree species also tend to thrive in environments close to tropical places, as they are wetter than usual climates.

For example, it's common to see weeping willows along the bayou, so if you think you're looking at one in Florida or Louisiana, your eyes aren't tricking you.

Again, if you want to plant a weeping willow but aren't sure if your garden is the right fit, you can always check which USDA zone you're in and test the soil's moisture.

Can You Grow Weeping Willow Anywhere?

As long as you plant a weeping willow somewhere with full to partial shade, good soil drainage, and slightly acidic ground, it should do well.

In general, this tree species grows best in zones 4-10, so that covers a bit of territory.

According to Arbor Day, even though weeping willows can grow and thrive near bodies of water, they can also handle a bit of drought.

So, you aren't out of luck for those in drier locations.

Furthermore, these trees can also handle a bit of clay ground, as long as there is drainage. For example, adding sand, gravel, and organic matter can help break things up if you have compacted dirt.

You also want to ensure the ground is slightly acidic, so your tree properly establishes itself in the soil.

How Often Should You Water A Weeping Willow? 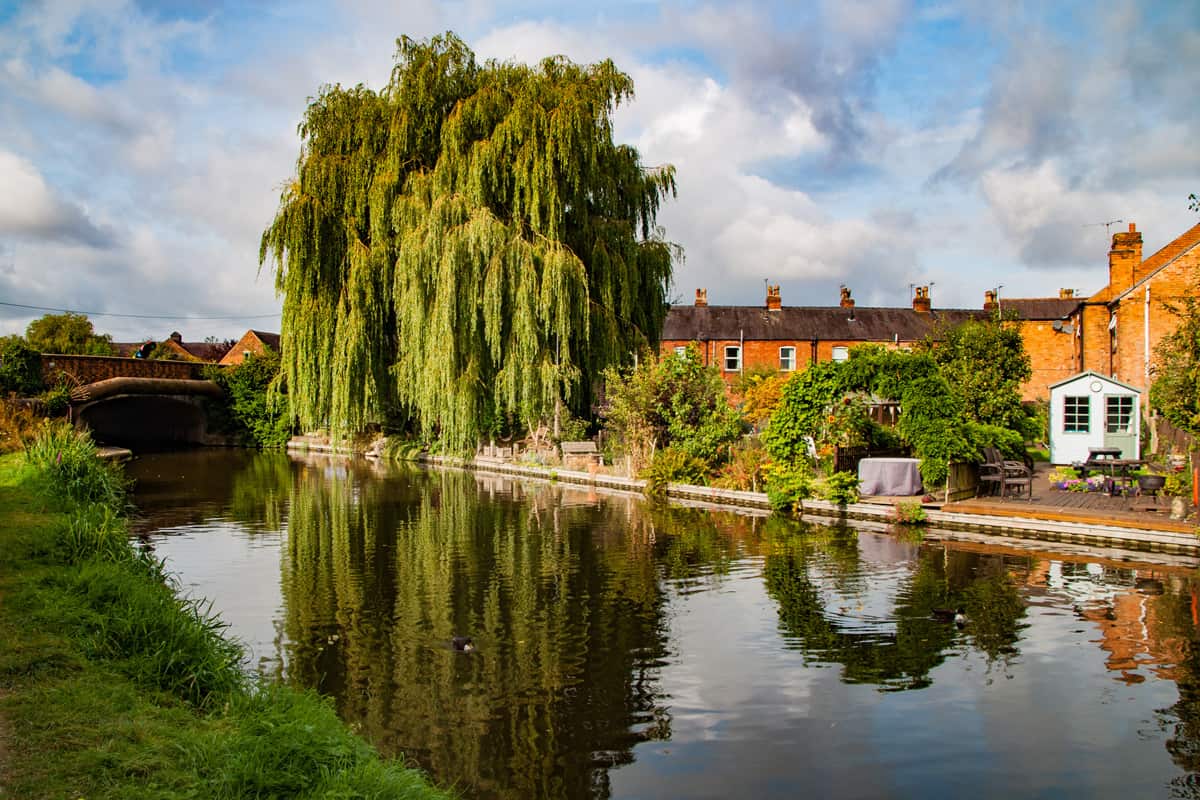 Now that you know your weeping willow loves water, it's essential to give it plenty. You want to provide a newer weeping willow with about ten gallons of water each week.

Of course, this doesn't have to be in one sitting, so try and spread your watering out between one and three times each week.

That said, once about a month passes with your willow in the soil, you can cut back your watering. Additionally, you don't always need to give your willow tons of extra watering if it's constantly raining.

This will all depend on your living conditions and whether your willow is near a body of water.

Remember, your tree will likely spread its roots a bit in all directions, so it will find some if you don't give it enough moisture.

According to This Old House, you need to water a weeping willow weekly for its first year, regardless of extra water present, so keep that in mind.

How Long Do Weeping Willows Live?

For those wondering how long their weeping willow will live, expect about 30 years. Even though these trees grow quickly, they don't have long lifespans compared to other species.

Again, that's not to say every weeping willow will only last three decades, but yours will likely have a similar timeline. In contrast, urban willows only last 20 years, which isn't too long. 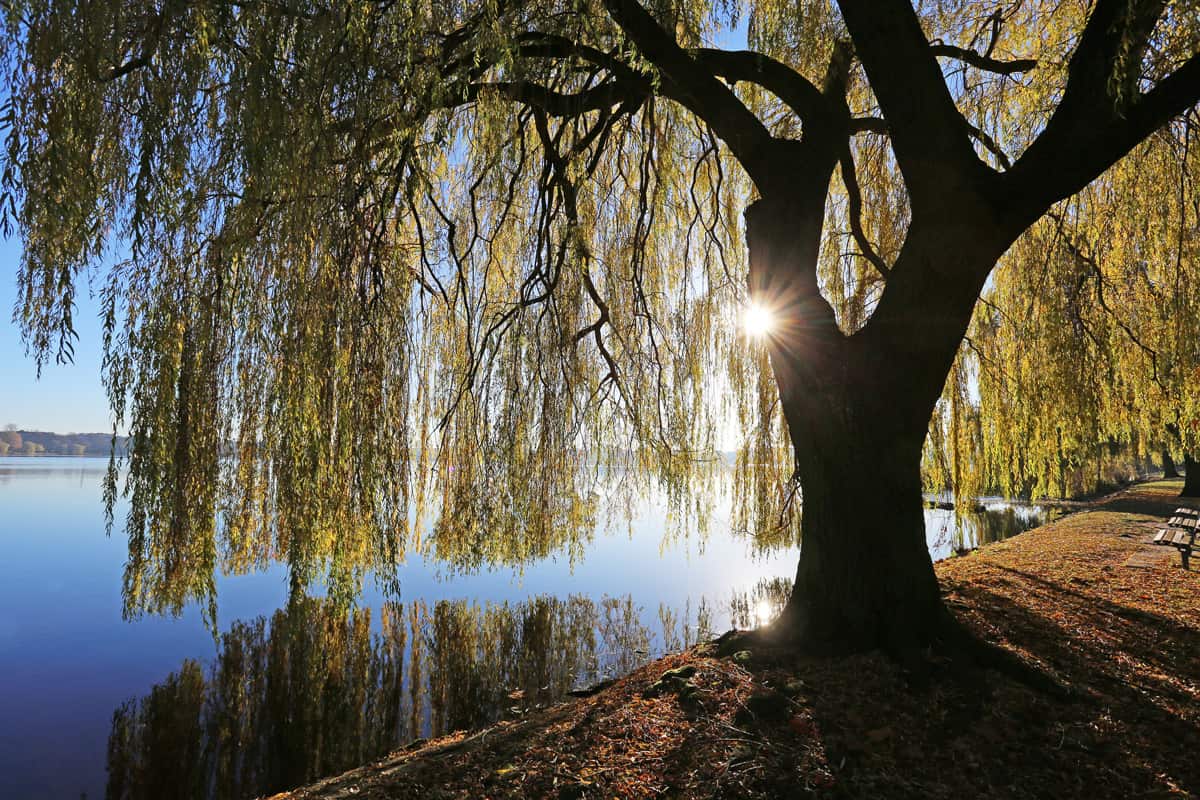 Whether you have weeping willows in your garden or want to plant them, it's essential to care for them properly. From what we found, this tree species can grow in sitting water, but we don't recommend starting one off that way.

Generally, it's better if your willow has good draining soil and enough sun exposure. You can also plant a weeping willow near a body of water or flood-prone area, so that's something to consider.

Made it to the end? Check out these helpful related tree posts below!

Lilac Bush Vs. Tree: What Are The Differences?

Why Is My Lemon Cypress Tree Turning Brown?

What To Plant Under Elm Trees [5 Great Options!]