Figuring out how and when to prune a holly bush can be tricky at times. Do you want to prune your holly but don't know what time of the year is best to do so? Not to worry; for your convenience, we have brought you the answer.

You should prune a deciduous holly bush in the winter and an evergreen holly in the early spring. To do this:

As we begin, we will cover all things hollies and tag some helpful related products. Whether your holly bush is deciduous or evergreen, regular pruning is essential. With that said, let's dive right into this topic! 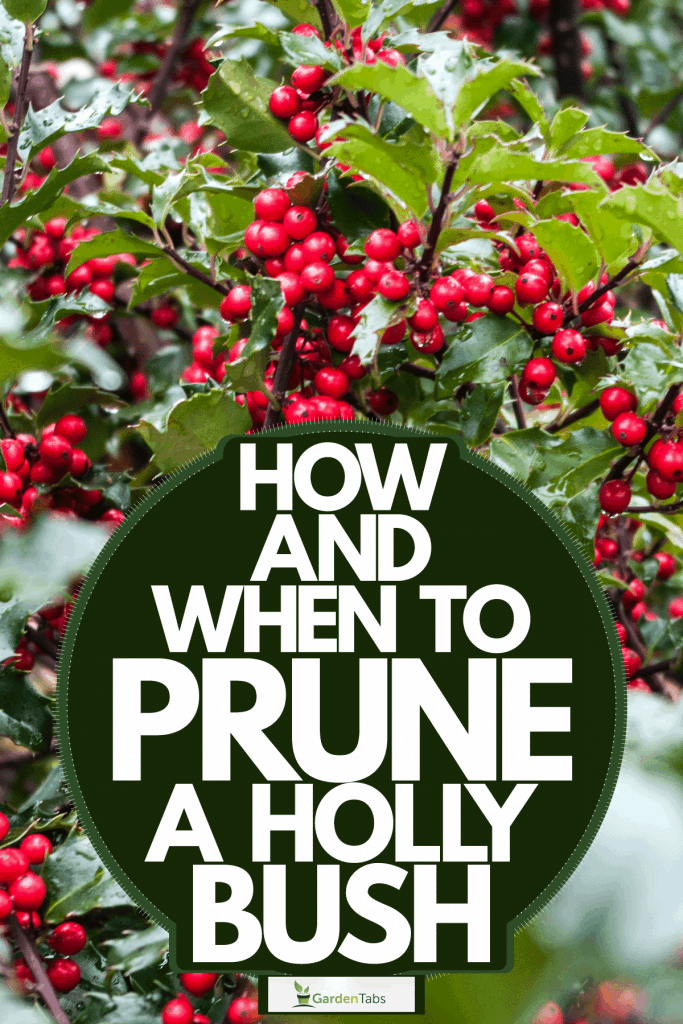 How Do You Prune A Holly Bush?

When it comes to pruning a holly bush correctly, make sure only to remove what is necessary. Generally, hollies prefer light pruning before or during their winter dormancy and then after in the spring. Most times, it is best to only trim your holly back about a third of its original shape to prevent shocking your plant. Although some holly does well with seasonal pruning, we recommend only doing it once or twice per year. 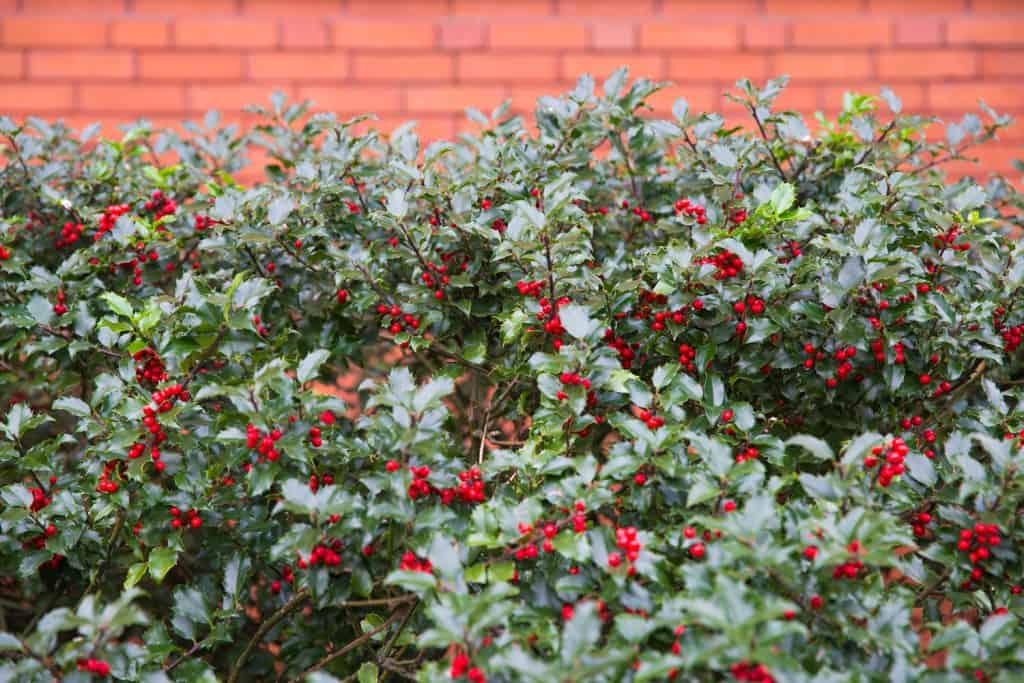 First, it is important to use sharp, clean garden shears while pruning a holly bush. From what we found, bypass blade hand pruners work well on hollies and don't cause them trauma like some shears will. It is best to find a pair of hand-held shears, so you are in complete control of what you are pruning.

2. Check The Shape Of Your Holly

Next, make sure to visualize the natural shape of your holly bush and how you want to prune it. In general, hollies have a round or pyramidal shape, so try to follow that while pruning. We recommend keeping your shaping to a minimum, so you don't end up causing damage to your holly.

3. Remove Dead Sections From Your Bush

Third, start by removing any dead or excess branches from your holly bush. Typically, any leggy or leafless branches on your plant are fine to remove while pruning. Keep in mind that if your holly bush does not currently have any leaves, it is most likely deciduous, so take it easy and only cut the ends of your plant's branches.

4. Cut Your Hollies Branches At Angle

Next, you want to cut your hollies' branches at an upward angle to encourage growth in the spring/summer. Depending on the season and type of holly you have, you can do this in winter or early spring. Although holly bushes do not like a ton of pruning, angled cutting will promote growth if done before the growing season.

5. Clean Up Around Your Hollies Base

Fifth, remove any dead foliage or weeds from the base of your holly. By doing this, you allow your plant to absorb as much water and nutrients as possible, resulting in a healthier holly. If needed, you can certainly spray a pesticide near the base of your holly if you notice signs of insects or diseases.

This product defends plants from pests, is safe to use on shrubs, and has a satisfaction guarantee.

Lastly, once you have finished pruning your holly, check its soil and see if it needs new mulch. If so, spread two to three inches of natural mulch around your bush to keep moisture in and weeds away. Also, if your holly is in dire need of nutrients, we recommend a continuous or slow-release fertilizer for your plant to feed it all season.

Here we have a natural coconut husk mulch from FibreDust to use around a holly. This mulch is non-toxic and expands when mixed with water.

Here is fertilizer from Safer Brand that is perfect for holly. This fertilizer nourishes acid-loving plants, delivers a slow-release, non-burning formula, and does not contain manure.

What Is The Difference Between Evergreen And Deciduous Hollies?

For those wondering if their holly bush is deciduous or evergreen, your plant's leaves are an easy indicator. If your holly loses its leaves in the fall and winter, it is a deciduous plant. Holly bushes that keep their leaves for the most part year-round are evergreens, hence their name.

In general, deciduous hollies leaves should begin to drop in autumn and then grow back in the springtime. Although evergreen holly bushes don't lose their leaves, it is normal for their foliage to thin out in extremely cold weather.

When it comes to deciduous holly being harder to prune, this is somewhat true. Although the pruning process for hollies remains the same, it can be harder to see what sections are dead on your bush. If you have trouble with this, we suggest a light winter pruning and then checking back once your hollies' leaves return in the spring. In general, you should only trim your plant's branches back about two inches, whether it is deciduous or evergreen.

How Tall Can Holly Bushes Get? 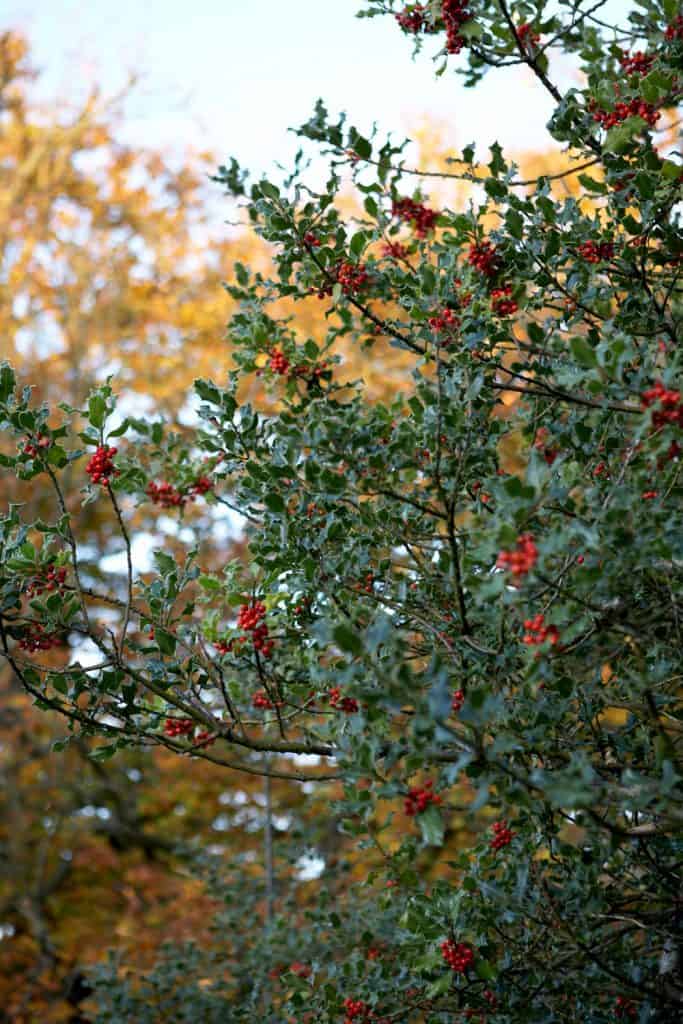 Generally, holly bushes will grow up to six feet tall. With that said, some holly species reach heights of over 50 feet, so make sure to do some research before planting. Although holly does have a slow to moderate growing speed, your bush might surprise you with the right conditions. If you want to see your holly grow tall, we suggest planting it somewhere with full sun, acidic soil, and good drainage.

How Much Can You Cut Back Holy Bushes?

Like we mentioned earlier, you should only cut back your holly a third of its current size. When it comes to pruning a holly, you should only remove dead sections and shape your plant up a bit. Holly, in particular, does not do well with over-pruning, so make sure to be careful while cutting your plant.

If your holly is deciduous (loses its leaves each year), this is when you can cut it back a bit more during dormancy in the winter. On the other hand, Evergreens keep their foliage year-round, meaning you should only trim them back a little.

How Do You Rejuvenate Holly Bushes?

If your holly bush is not doing well, there are ways to get it back on the right track. To start, make sure you wait until the winter to cut back a deciduous holly and then early spring for an evergreen. From what we found, it is better to slowly rejuvenate a holly bush over a few years rather than all at once.

To do this, cut back your plant's current strongest branches to about six inches from the ground. We recommend doing this in sections each winter over two to three years for best results.

How Do You Thicken Holly Bushes?

For anyone with a leggy or thinning holly bush, springtime shearing is a good option to try. Regardless of the type of holly you have, regular spring trimming is an easy way to promote thick foliage for your plant. Another way to encourage a thicker holly is to prune the plants and trees around it that might be blocking the sun. Adequate sun exposure is vital for a holly bush and can affect how full and healthy your plant's foliage is.

Can You Take Cuttings From Holly? 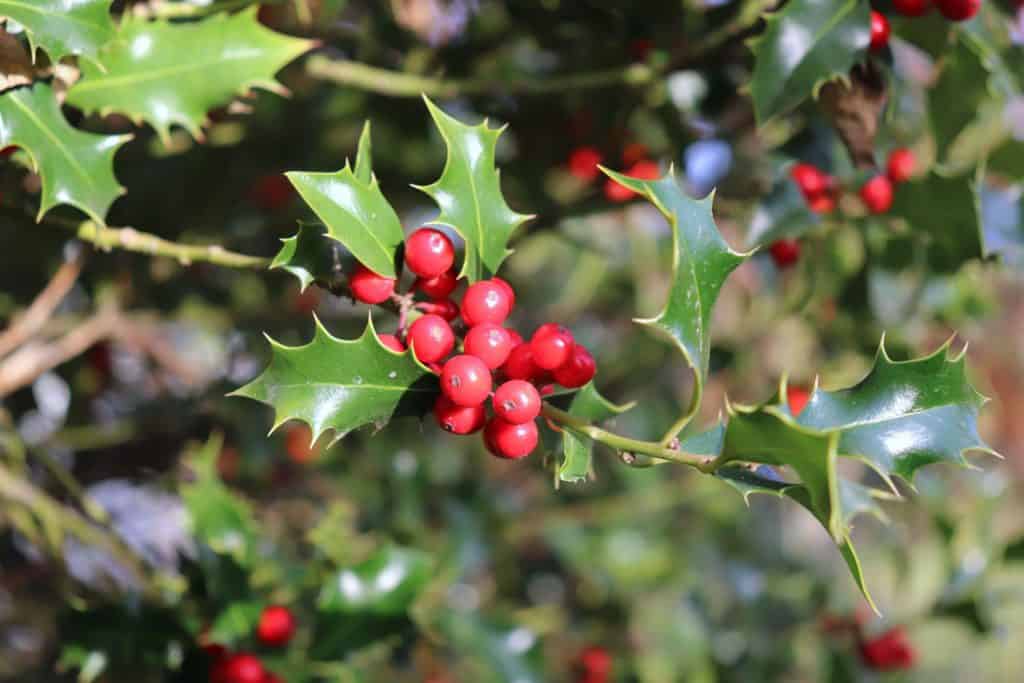 When it comes to taking cuttings from a holly for replanting, this is possible. Although every holly bush will react differently to propagation, this needs to be done during your plant's dormancy. That essentially means your cuttings might not have leaves but should be able to grow once the spring weather kicks in. Start by cutting above another bud union, taking around six inches of existing holly with you to grow in a new location.

Is There A Difference Between Deciduous Holly Cuttings And Evergreen?

Between the two, evergreen holly cuttings will have a bit of life in them after you take them, and deciduous will not. Like we covered, deciduous holly goes into a state of dormancy during the wintertime that causes them to lose their leaves, so your cuttings won't produce any until later on.

On the other hand, evergreen cuttings should keep some of their original leaves and be ready to plant in the springtime. Regardless, we suggest marking your cuttings in your garden so you can find them in the spring.

Can Holly Bushes Be Transplanted?

If you want to transplant your holly bush, try holding off until springtime. By doing this, your holly bush is less likely to go into shock and potentially die after being replanted. If it is dire, a holly bush can be transplanted in the early fall or late summer, weather permitting. Generally, hollies have shallow roots, so the transplanting process is much easier than other shrubs.

How Deep Are Holly Roots?

Typically, a hollies roots are 17 to 24 inches deep. With that said, this popular shrub's roots are not considered invasive and are pretty easy to transplant if needed. Hollies, in general, require good draining soil to survive and rely on their root system to hold them steadily into the ground. Generally, we recommend planting holly bushes away from your home because they tend to attract termites due to their moisture-holding abilities.

Whether you have holly bushes in your garden or want to plant some, pruning should take place in the winter and spring. Depending on the type of holly bush you have, you should prune it regularly before its growing season to see the best results. From what we found, hollies do not like over-pruning, so make sure not to take off more than a third of your plant's size.

If you want to see your holly look thicker and healthier, trim it every so often at an upward angle and watch it grow. Regardless of where you live or what holly bush species you grow, make sure your plant gets plenty of sunshine, has good draining soil, and gets pruned each year before the growing season.

Made it to the end? Head on over to these helpful posts you might have missed!

How To Grow Holly From Cuttings [Holly Propagation Guide]