The most natural question after you’ve planted your pumpkins is to ask exactly how many of them will grow per plant. The answer, of course, is a combination of many factors such as pumpkin species, soil type, and other environmental factors such as temperature and humidity.

So how many pumpkins can a single plant produce?

A single pumpkin plant can produce between two and five pumpkins. Miniature pumpkin varieties such as Jack B. Little (also known as JBL) can produce as many as twelve pumpkins. But this is understandable because each of those pumpkins fits in the palm of your hands and don’t take nearly as much space in as larger varieties do.

Larger pumpkin varieties such as the Kratos Hybrid Pumpkin require more resources such as seeds, soil, and irrigation, growing to a size greater than 14 inches and reaching 14 kg in weight. In optimum conditions, you can only grow one pumpkin per plant.

For the best harvest, it is important to keep the pumpkin plants free from weed through shallow cultivation and hoeing. If you expect extended dry periods in the summer, make sure to irrigate with plenty of water. Plant pumpkins tolerate periods of dry, hot temperatures very well but they are always thirsty for water. 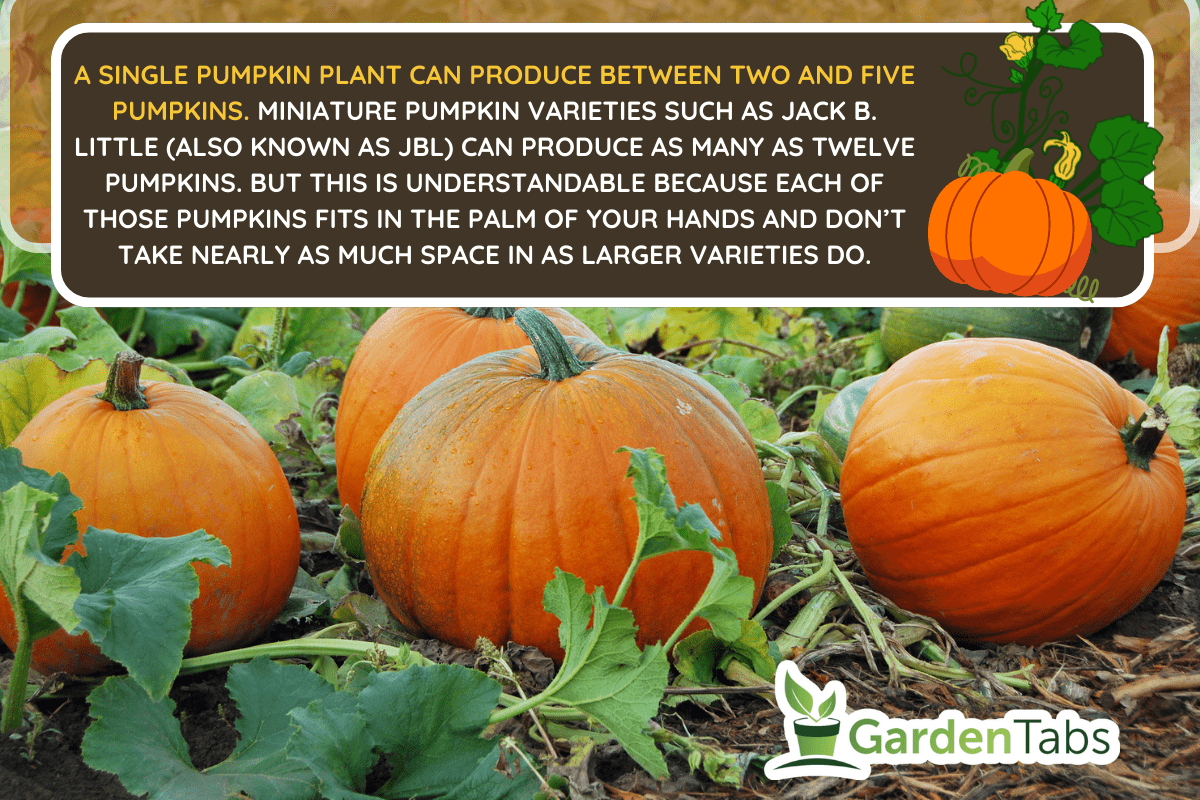 How many Pumpkins Should You Target Per Plant? 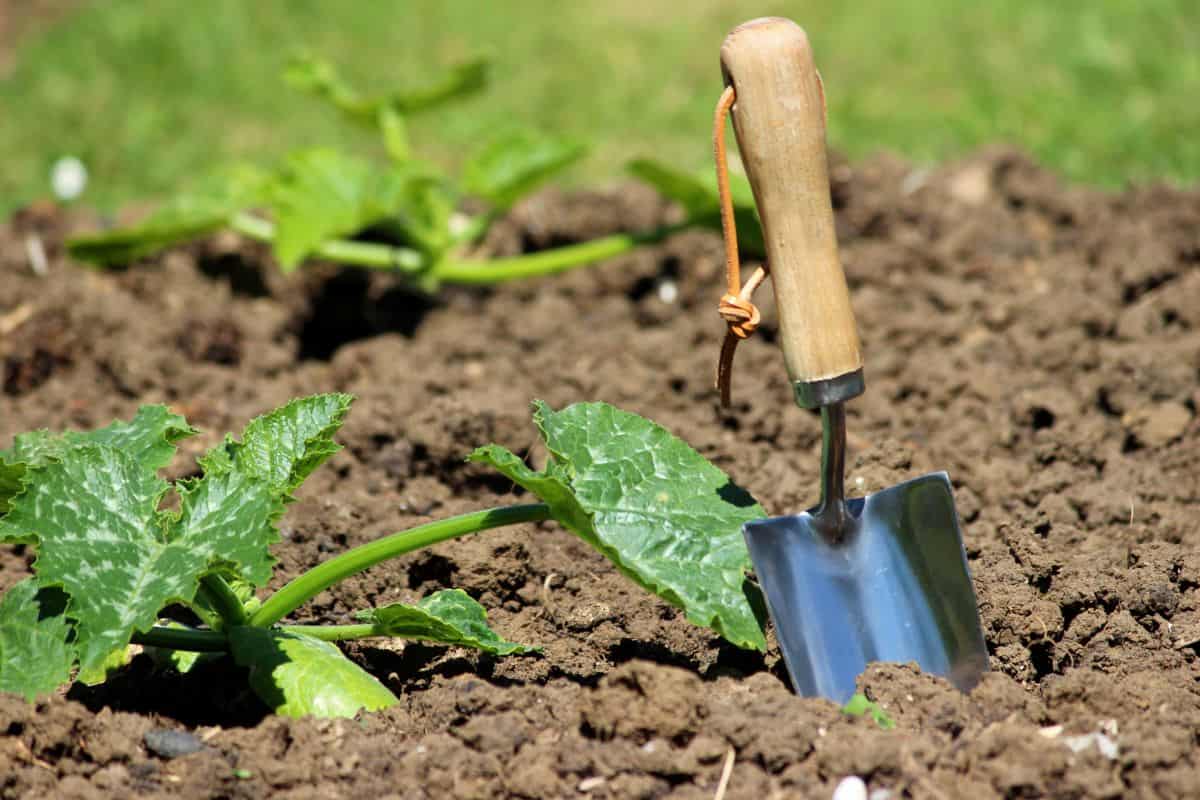 The answer to this question ultimately comes down to what your goal for the harvest is. Do you want to grow a giant pumpkin such as Dill's Atlantic Giant Pumpkin? Then optimize the plant conditions in such a way that it dedicates all the resources (nutrition, sunlight, water) to a single pumpkin instead of multiple pumpkins competing for growth. If your target is to grow normal to larger sized pumpkins, such as the popular Cinderella Pumpkins, then try to shoot for at least 2 pumpkins per plant. 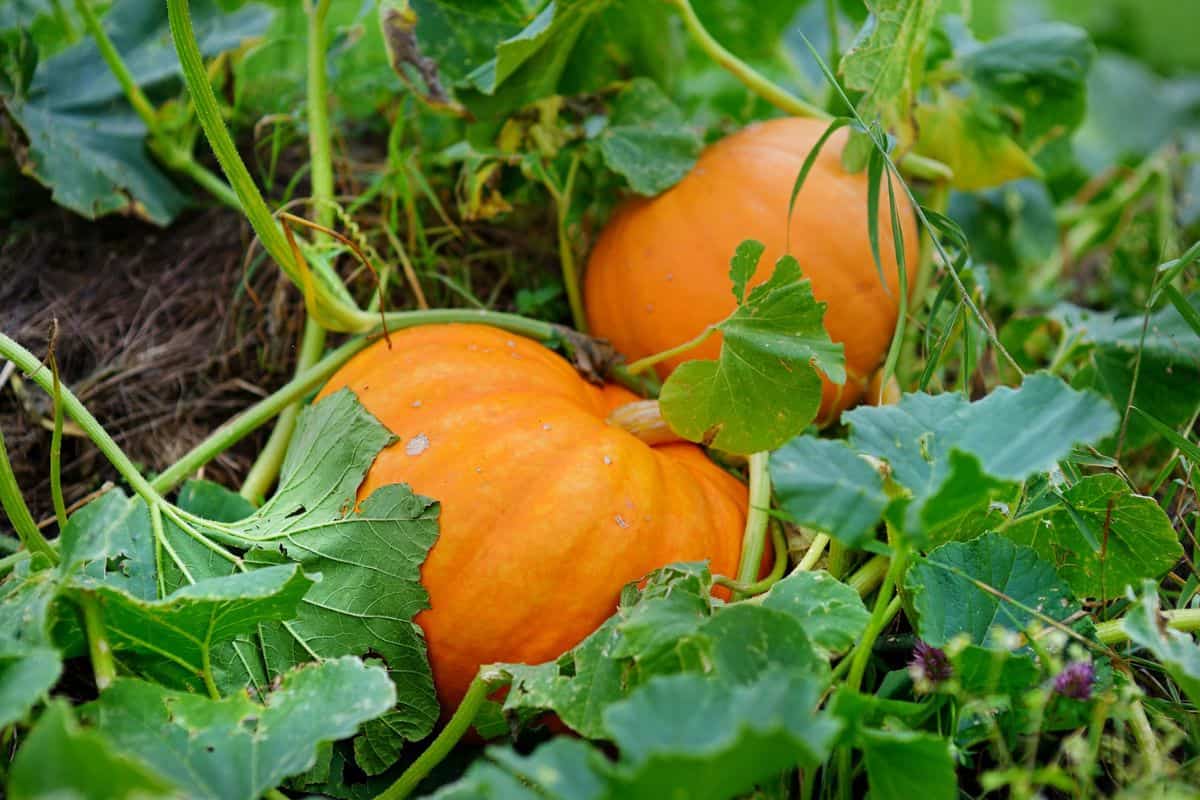 But how many is too many? The general rule of thumb for normal pumpkins per plant is a target for 3 fruits per plant. 4 and beyond is a crowd. These limitations per plants usually come down to the single biggest factor: the vines. The more pumpkins per plant, the 'wilder' are the vines. They will need more room to grow, run, climb, and get much-needed air. When resources start to thinning due to overcrowdedness, all of the pumpkins will starve.

How Much Space Does a Pumpkin Plant Need? 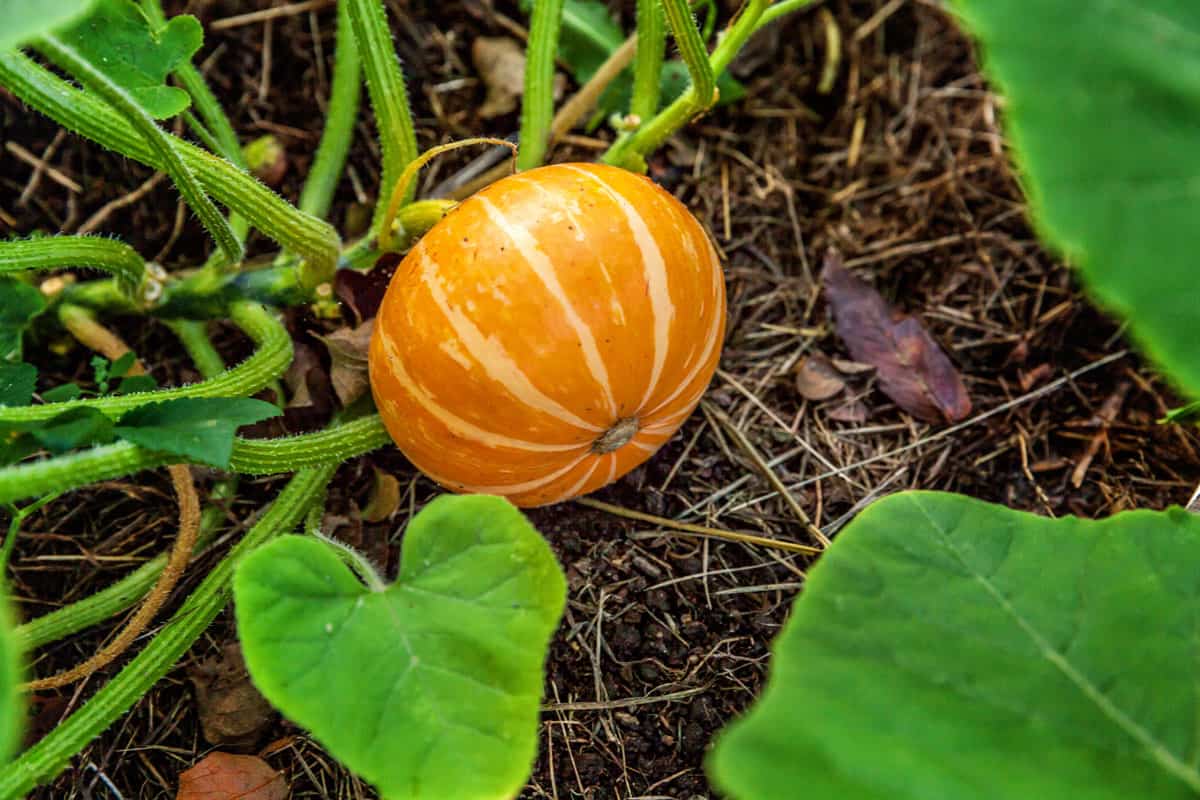 No matter which variety you choose, pumpkins need lots of space for growth. Large and giant pumpkins need more than 70 square feet per plant for best results. With so much space to grow, the pumpkin can reach a size of several hundred kilograms at harvest. Midsize pumpkin varieties such as Howden and Jack-O-Lantern need five feet between plants and four feet between rows for improved harvest.

Since pumpkins are 90% water, make sure to provide them with plenty of water otherwise you might experience poor yield from the most vigorous seedlings even when space requirements are met.

Small and miniature pumpkins should be placed two to three feet between plants with sow spacing being six to ten feet apart.

The Importance of Row Spacing 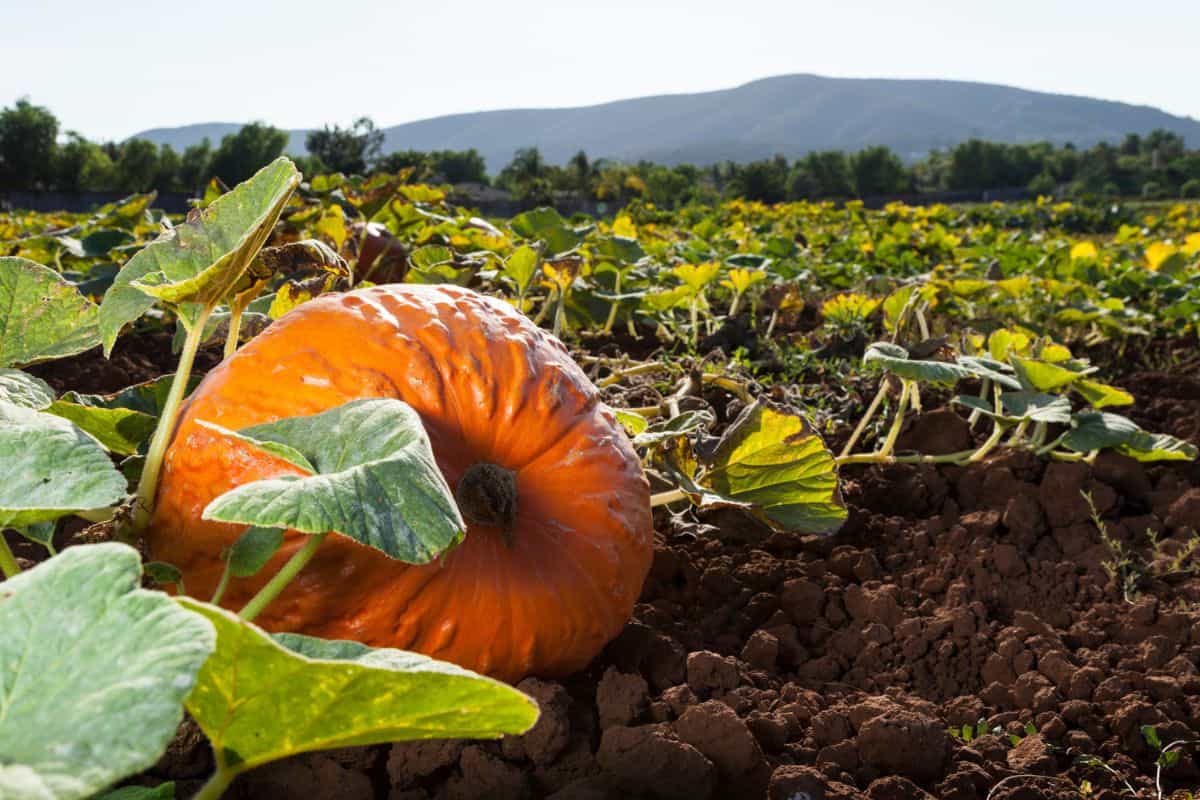 Row Spacing is an important factor that will play an important role in the success of your pumpkin harvest. Many gardeners believe that equal spacing is the key to a high yield, but this is not always the case. It’s important for the plants to have plenty of room to grow even if they’re in close proximity to each other.

There is no single formula that growth of your pumpkins with 100% certainty. Gardening is a very personalized hobby and requires plenty of trial and error before you can yield the perfect harvest. The trick is to learn from past mistakes. 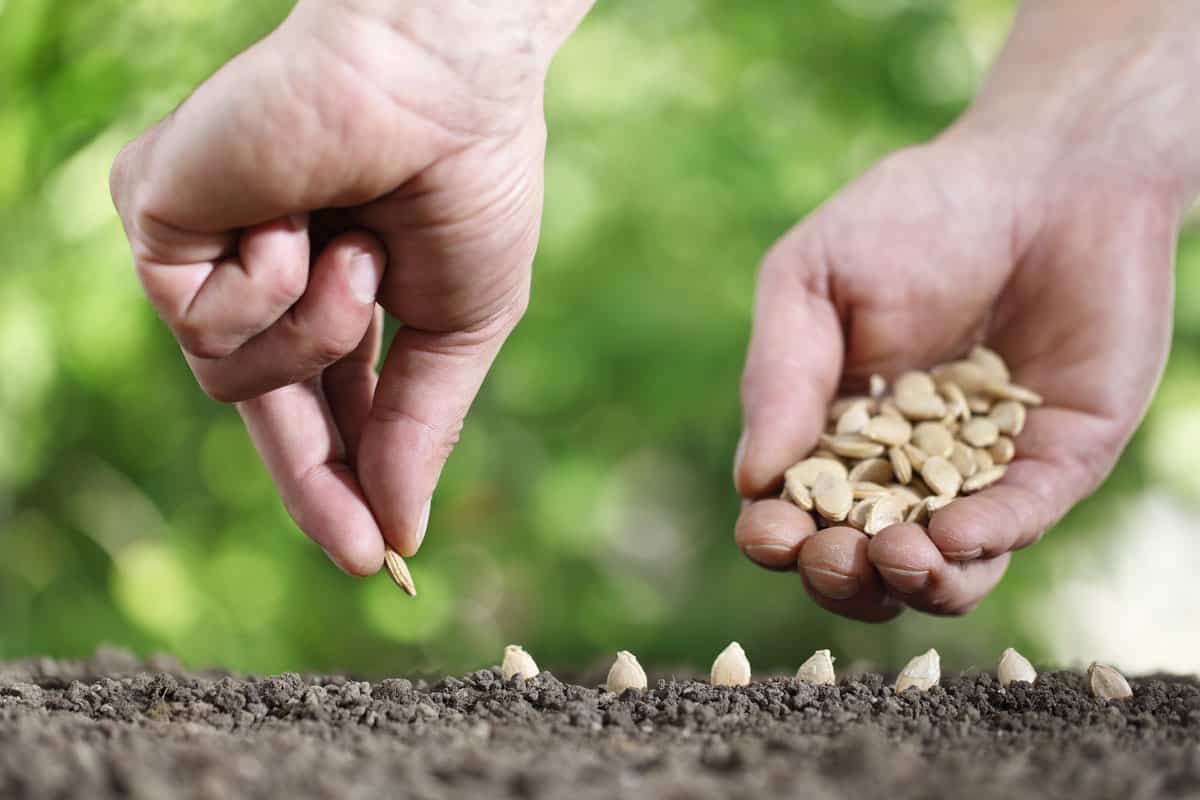 Try planting between three to five pumpkin seeds per hill. Each hill should be spaced at a distance of four to six feet. This is how most gardeners are known to work. However, a more efficient way is row cropping the pumpkins for more efficient growth. Normal sized pumpkins will need at least 12 inches of space between the rows. Miniature pumpkins need five inches apart.

This is important because pumpkins have much larger vines that will quickly grow huge and compete with each other for others. If need be, the vines will start choking each other off if they're too close. Under these 'claustrophobic' conditions, it is harder for weeds to grow. Row spacing and cropping is a great way to utilize the natural defense mechanism of vines to encourage more productive growth.

Grow Smaller Pumpkin Varieties if you Don't Have Enough Space 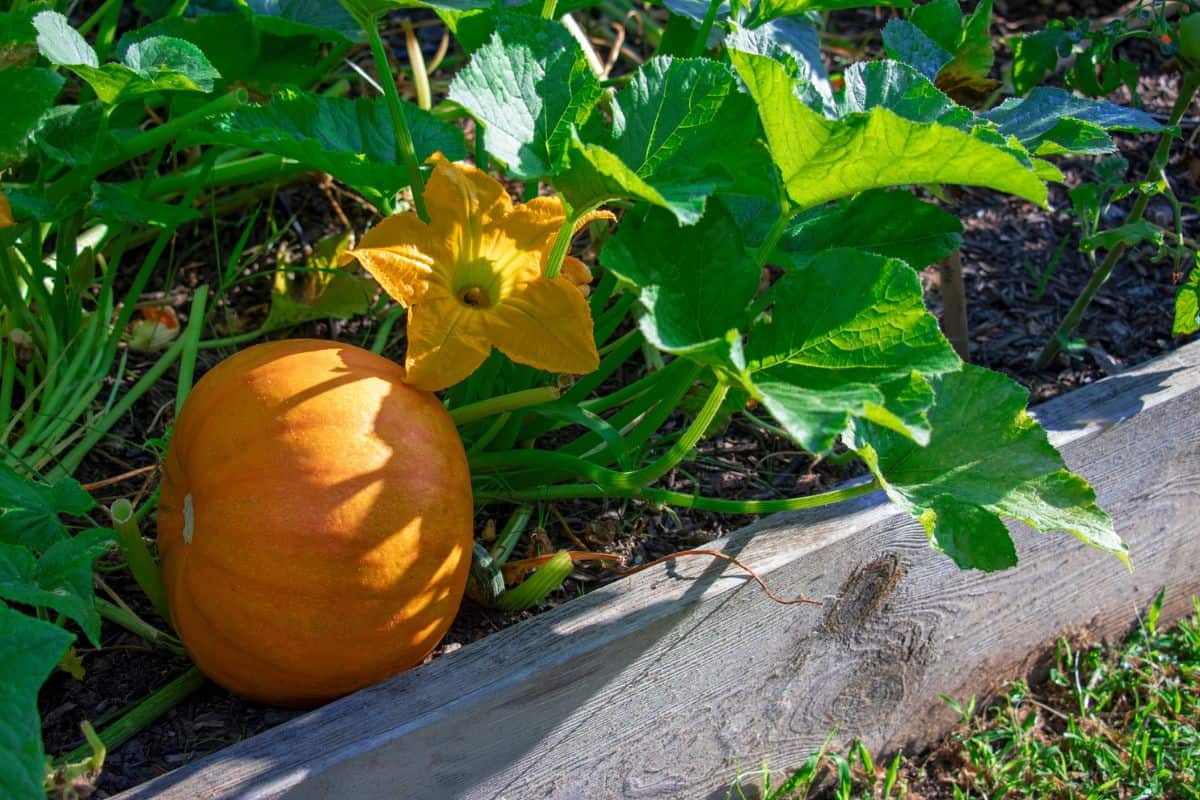 Pumpkins vines can grow to sizes of greater than 20 feet or more. Make sure to choose an area where plants have plenty of room to grow. As long as the vines are still young, you can direct their position to grow where you want them to. Once the vine starts flowering, you should leave them to grow your pumpkin.

If you don’t have enough space in your garden, consider growing smaller varieties such as Baby Boo or the famous Bumpkin pumpkin. Some of the smaller varieties may be inedible, but they sure are a sight to behold once fully grown.

Learn more about the various types of pumpkins in this epic post. This should help you figure out which pumpkins to grow in order to get the most fruit on the vines. To get the seeds, check out this list of the top 50 stores for pumpkin seeds too. And before you head out to your garden to start planting them, make sure you read this guide on how to grow pumpkins successfully too.

A few additional links that could help -

How Long Does It Take to Grow a Pumpkin?

How and when to harvest pumpkins

23 Things To Do With Pumpkins (Beyond recipes and decorating!)