Choosing flowers for your garden isn't always as easy as you'd think. Do you want to try growing black-eyed Susan but have no idea if it will spread? Is black-eyed Susan a generally aggressive or invasive breed of flowers? Do these flowers self-multiply?

Luckily, we've extensively researched these questions and have the answers below!

Therefore, if you want to grow these flowers, we recommend keeping them in a planter, raised flower bed, or creating a protective barrier around them.

As we start this article, we will cover all black-eyed Susan and discuss whether these cheerful flowers spread within a landscape. Whether you're new to black-eyed Susan, have a few growing in your yard, or need additional help, you're at the right place. With that said, let's dive right into this topic! 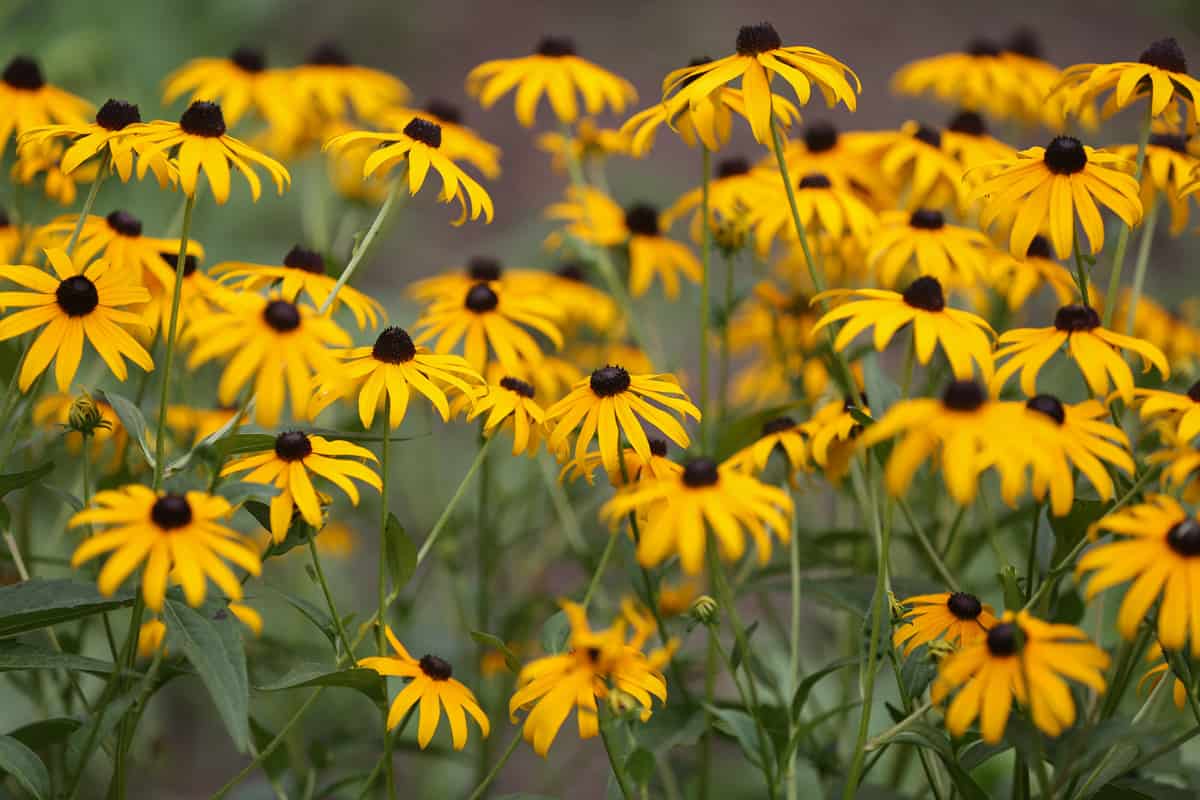 Yes. It is common for black-eyed Susan to spread within a landscape shortly after you plant them. Most times, these garden flowers will develop stems underground if they're perennial, making way for a new plant to appear.

On top of that, black-eyed Susan is a somewhat aggressive grower. Even though these flowering plants don't become very tall, you can expect them to take over whatever section of your garden they're in.

According to HGTV, black-eyed Susan can become 24 to 36 inches tall and wide on average, so enough of these plants in your landscape can be magnificent.

However, if you have other flowers nearby, you may not want black-eyed Susan asserting its dominance. Since these plants can self-sow, it's possible to see new plants emerge from the soil after a few weeks/months.

So, to keep your flowers in check, we recommend keeping them in pots, flower beds, or bordered "zones" within your property.

Although black-eyed Susans aren't technically invasive, they can be within your yard. As we said, these flowering plants spread quickly and overpower a property.

Especially with perennial varieties, you could witness other species near black-eyed Susan struggle to get nutrients, sunlight, and water.

If you plant your black-eyed Susan too close to another flower species, it will likely show signs of invasive and aggressive growing behaviors.

According to Plant Pathology, an easy way to prevent invasive behavior from black-eyed Susan is by planting it far enough away from other species.

Creating a black-eyed Susan section of your flower garden may be the best idea. And, of course, you could always keep your black-eyed Susans in pots where they can't spread so rapidly.

Sometimes, not all plants can be friendly with each other in your garden!

How Do You Keep Black-Eyed Susan From Spreading? 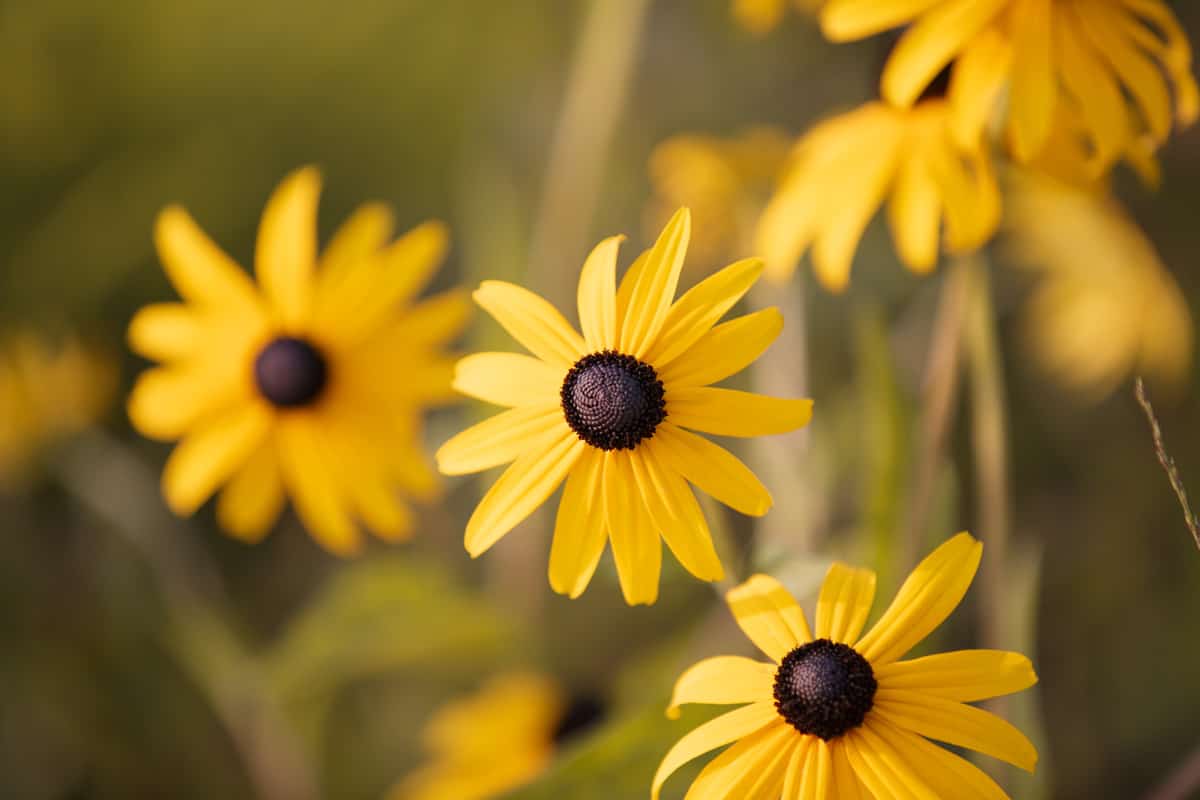 For those worried about black-eyed Susan taking over your landscape, there are ways to keep this from happening. First, you want to determine the age of your flowers.

Since black-eyed Susan will begin re-seeding themselves after the first growing season, you need to do some routine maintenance in their soil.

Specifically, experts recommend digging up the rhizomes and removing the entire piece of root from your black-eyed Susan's soil.

Remember, these flowers create new stems and roots for other plants to sprout, ultimately becoming an unmanageable collection of flowers in your space.

According to Almanac, even a small section of rhizome can produce another plant from your black-eyed Susan. Therefore, missing even the smallest underground rooting/stemming section can mean tons of new growth in the coming weeks.

Although they don't look like traditional weeds, in many ecosystems, black-eyed Susans are sometimes considered weeding plants.

Native to eastern and central North America, black-eyed Susan is considered a naturalized species by western North America and China.

However, that's not to say the way it grows in naturalized regions isn't still weed-like, but it isn't going to fall into that classification: depending on where you are.

As we covered before, black-eyed Susans can grow moderately aggressive, often showcasing invasive tendencies within a landscape.

So, if you compare them to weeds, there are a few similarities.

Yes! Black-eyed Susans are considered wildflowers and one of North America's most popular varieties. Although these flowers are found worldwide, black-eyed Susans have become an American staple.

They are beautiful and grow similarly to a wildflower species, self-spreading and covering entire plots of land with their bright yellow flowers.

According to Wildseed Farms, the black-eyed Susan is the most common wildflower variety. Their characteristics include a brown, domed center surrounded by bright yellow ray florets.

If you've ever taken a trip to the mountains during spring or summer: black-eyed Susan was probably growing and blooming everywhere.

These flowers don't require much attention to flourish, often re-seeding and creating entire fields on their own. Of course, that's gorgeous in nature settings but isn't always ideal for smaller gardens.

Regardless, if you want to grow a wildflower species in your landscape, black-eyed Susan is a great choice!

How Far Apart Should I Plant Black-Eyed Susans? 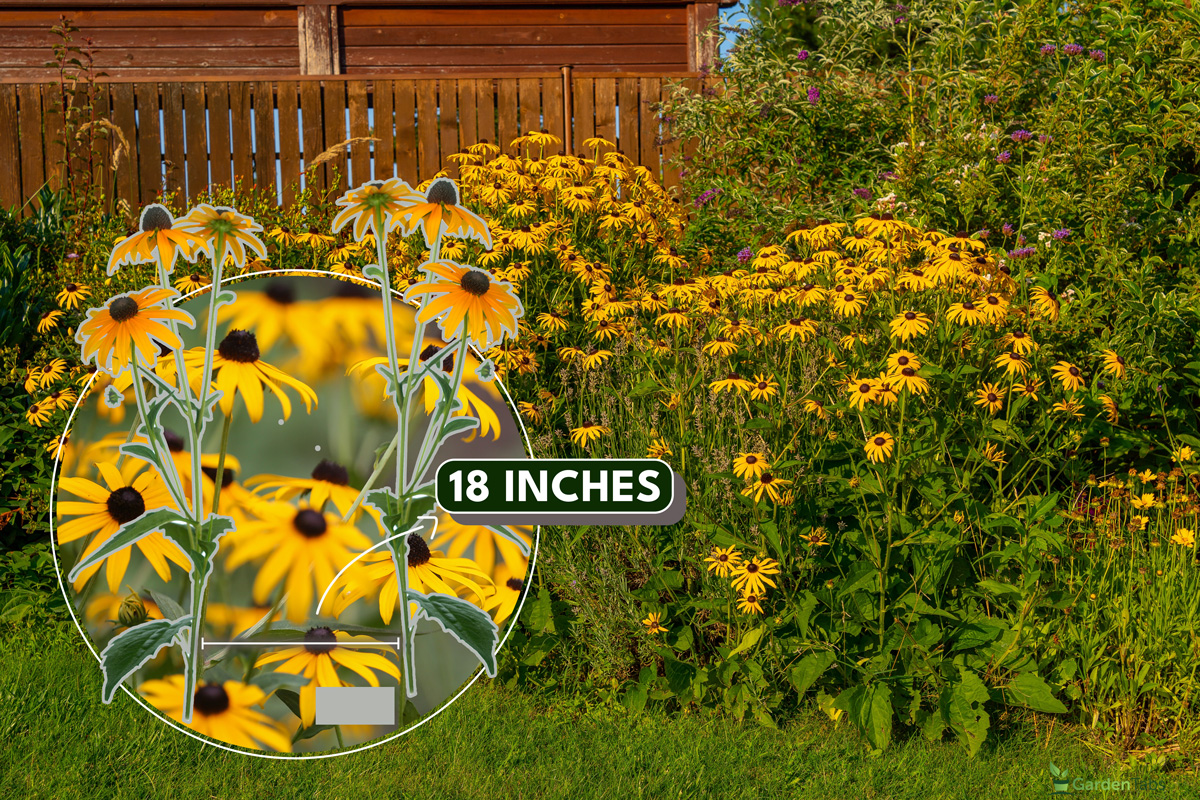 Placement and spacing are crucial if you are starting your flower garden from scratch. Remember, black-eyed Susan can be aggressive as they mature, so you'll need to give your flowers some space.

When you grow a more aggressive flower species in your landscape, creating a physical barrier can be helpful. For example, if you want to enjoy black-eyed Susan without invasive behaviors, we recommend keeping them in a large pot/planter.

Many wildflower growers also rely on raised beds for their flowers, so that's another idea to try. The key is giving your black-eyed Susan space to flourish: but not so much that they fill your entire yard.

This raised flower bed kit comes with a galvanized steel structure, is easy to build, has a rectangular shape, has four supporting bars for stability, measures 8' (L)x4' (W)x1' (H), and won't rust/weather.

When Is The Best Time To Plant Black-Eyed Susan?

The best time to plant black-eyed Susan is in the spring or later in the fall. Generally, these flowers respond better to cooler weather right as they're planted.

Therefore, you don't want to try and put them into the soil during a heat flash. Many flowering plants do better in moderate conditions initially, so keep that in mind while planting your black-eyed Susans.

Miracle-Gro claims that a spring or fall planting timeline allows your black-eyed Susan to develop roots before the weather gets extremely hot or very cold.

Depending on where you live, you may need to wait until later spring to plant your flowers and rush the timeline in the fall if cold weather is fast-approaching.

Ideally, you want to let your black-eyed Susan grow enough of a root system to withstand high or low temperatures to see it thrive through the next growing season.

Furthermore, if your flower is annual, you want to plant it in the spring. For perennials, you can plant black-eyed Susan in the spring or fall, giving you more leeway.

Where Is The Best Place To Plant Black-Eyed Susans?

Now that you know when to plant black-eyed Susan choosing a sustainable location is essential. These flowers generally do best in soil temperatures around 70 degrees Fahrenheit, so keep that in mind.

On top of soil climate, your flowers will also do best in large containers, as they won't be able to spread so rapidly or encroach on other species in your landscape.

Black-eyed Susans also thrive in full sun, although they can flourish in partial shade. According to experts, you also want to ensure the soil you use for black-eyed Susan is fertile.

Like most flowering plants, black-eyed Susans will grow better and be healthier if their soil is high-quality. However, your flower should still grow if the ground conditions aren't great.

Wildflowers are not faint-hearted, often growing in the poorest soil conditions without much trouble.

Do Black-Eyed Susans Come Back Every Year? 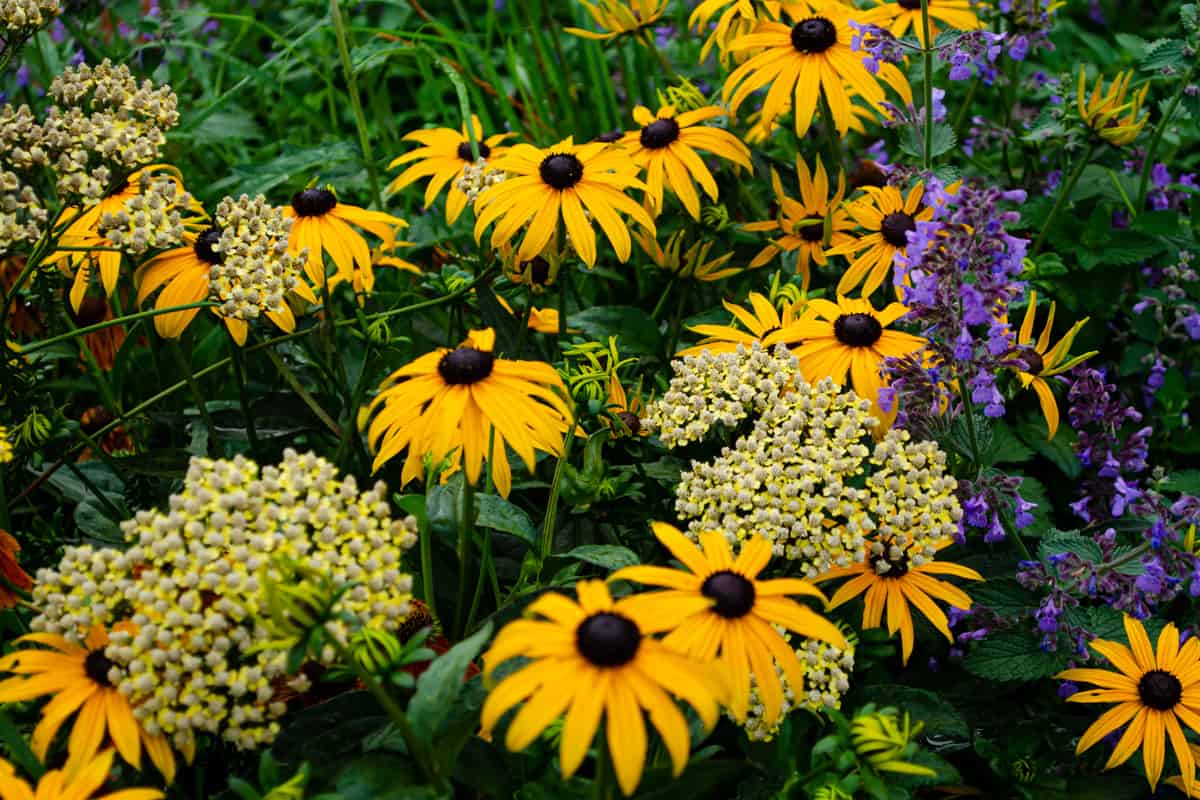 Depending on what type of black-eyed Susan you grow, they could return next year. Since some black-eyed Susans are annuals, many gardeners will not see their wildflowers return after winter.

However, others are perennials or biennials, meaning you should have them return to your garden once the weather improves.

According to House Method, a popular perennial variety that looks like a black-eyed Susan is the Sweet Coneflower, which should come back for years.

Again, you might be able to try growing a common black-eyed Susan as a perennial in certain climates, for example: if you live somewhere with relatively warm year-round weather.

One of the leading killers of black-eyed Susan is the freezing weather. So, if you have harsh winters, your plant won't likely return in the spring if it's annual or biannual.

Whether you have a black-eyed Susan in your landscape or wish to grow one, it's crucial to understand how they grow. We found that these gorgeous flowers spread relatively fast, often self-seeding within weeks of planting.

In addition, perennial black-eyed Susans will grow stems beneath the soil's surface, prompting new flowers to sprout from the ground.

These flowers aren't technically invasive, but they can showcase aggressive and weed-like behaviors if you don't give them a set of boundaries.

Made it to the end? Check out these other helpful related flower articles below!

How And When To Transplant Black-Eyed Susans

Plants For Shallow Soil Over Concrete [17 Ideas For Your Landscaping]