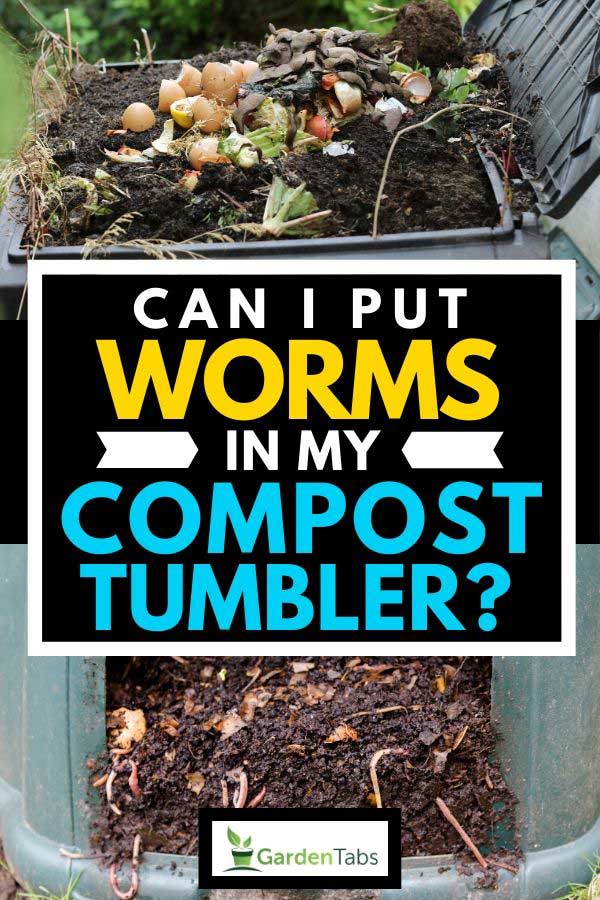 Worms are a vital part of a garden ecosystem and instrumental in the creation of lush, fertile soil for growing crops. Since you also use your compost tumbler to create rich soil, you may be wondering if you can put worms into a compost tumbler? We researched to get you the gardening know-how you need!

The presence of earthworms, red wigglers, and other types of worms can speed up the decomposition process and provide you with nutrient-rich soil in less time than decomposition would typically take.

What does the practice of worm cultivation look like, though, and how can you get started? Keep reading for all the details!

Can You Put Worms In Your Compost Tumbler?

Thinking about the different ways you can diversify your composting process? Let's explore your worm-based options. With a little more information at hand, you can determine whether or not you want to introduce these wiggly macro-organisms to your tumbler.

Do You Need To Add Worms To Your Compost Tumbler?

Your compost tumbler is more than just a place where you can throw your banana peels, lettuce tops, and other perishable food. After it's had time to sit, it becomes its own ecosystem. As a result, your compost tumbler will play host not only to the foods you dispose of, but also to the fungi, microscopic bugs, and other critters that help to break that food down.

Most types of worms, from red wigglers to your standard earthworm, help break down food debris when they're out in the wild. They'll continue to do so when placed in a compost tumbler. In most cases, they'll even help your compost decompose faster than it would on its own.

That doesn't mean, though, that your compost tumbler has to have worms in it if you want it to be successful. You can keep a worm-free compost tumbler in your backyard and still see positive decomposition results within three months.

However, if you want your compost to turn into usable soil more quickly, several worm species will help you get the job done.

What kind of tumblers will these worms thrive in? Some of the best compost tumblers to add worms to include:

If you've been composting for a while, then you may want to upgrade your current tumbler to a Lifetime 60058. The Lifetime 60058 Tumbler comes equipped with double-wall panels, helping the tumbler retain heat in the winter and summer. You won't need to rely on plywood or other available materials, either, to stir your compost. While the Lifetime 60058 can't be rotated, it does come equipped with an internal bar designed to help you rotate your compost. Any worms you up into this tumbler will thrive in the heat and enjoy limited habitat disruptions.

The Good Ideas Compost Wizard Jr. is the ideal compost tumbler for the beginning composter. Its smaller size will keep it out of the way in your backyard, and its dark coloration will help it retain the heat it needs to decompose your foodstuff. Your worms will be right at home in this container.

The spin bin composter is easy to put together and easy to access. Its build also helps you frequently rotate your compost, promoting even decomposition throughout the full 60 gallons.

You might think that worms would get irritated with your spinning your composter around. This isn't necessarily the case. Spin your bin slowly, and the worms will have time to readjust. They're surprisingly hearty creatures, as well, so don't let their nature keep you from seeking out the compost bin you want in your back yard.

If you're looking for a smaller composter that you don't have to rotate, look no further than the Good Ideas Dueling Tumbler. This tumbler stores compost tea in its base and doesn't take up too much space in your backyard. Its duel chambers will help you generate compost at different speeds and pHs. If you want to get creative, you can place worms in one chamber while leaving them out of another. In just under a month, you'll come to see the benefits of a few squirmy buddies in your compost bin.

Can You Add Worms To Your Compost Bin?

If you have a compost bin instead of a compost tumbler, you won't necessarily need to add worms to your structure. Compost tumblers are contained units that are rarely exposed to the elements. As a result, you'll need to work harder to create a healthy environment for your compost. Bins, comparatively, typically have one of their ends open. As a result, digestive critters, including a variety of worms, will be able to make their way into your bin naturally.

In short, you can add worms to your compost bin, but you don't need to. They'll find their way there on their own.

What Worms Are Best For Composting?

Unfortunately, not all worms were created equal. Some worms are better composters than others. Red wigglers and redworms - Eisenia fetida and Lumbricus rubellus, respectively - are two of the best species to introduce to your compost bin. They prefer the nutrient diversity of a compost bin to regular dirt and may make their way to an exposed compost bin on their own time. When it comes to tumblers, you'll need to do a bit of introducing, but before long, your new worms will be hard at work.

What Are The Differences Between Nightcrawlers and Redworms?

Nightcrawlers are cousins to the redworm. They two species look reasonably similar and can often be mistaken for one another. Nightcrawlers, however, are slightly larger than redworms. They can go through compost about as quickly as redworms, but they are a hair slower when it comes to the decomposition process. Mistaking the two upon an initial purchase won't cause your compost any harm.

Are Maggots Bad For Compost?

Maggots don't tend to have a place in polite gardening society. When it comes to composting, however, they're difficult to avoid. Maggots love composting environments. The heat and nitrogen-rich soil provide them with the perfect conditions they need to grow and reproduce.

The good news is that while maggots aren't the prettiest to look at, they're not going to disrupt your composting process. Instead, maggots may accelerate the composting process, making them a valuable - if slightly disconcerting - addition to your bins. That said, you shouldn't actively try to introduce maggots to your containers. Let them appear naturally, and don't feel put out if they don't show up at all.

How Long Do Compost Worms Live?

Despite their diminutive size, compost worms can live a reasonably long time, so long as they're well cared for. The average lifespan of a compost worm is ten years. If you have enough compost worms in your tumbler, they'll begin to reproduce and replenish their numbers for you, should some start to die.

How Fast Do Worms Multiply?

Compost worms mate when near one another - no fussing over a first date required. Once they've mated, the worms will give birth to either cocoons or eggs, depending on their species. These will each contain between five and six baby worms. Your worms, in turn, will produce about 20 offspring per mating session.

That said, compost worms can easily overpopulate your tumbler if you put too many in. Red worms, specifically, can generate a cocoon between two to three times a week. This means that, should you start your tumbler with only two worms, you may have sixty baby worms on your hands by the end of your first week.

Why Are Your Compost Worms Dying?

For as fast as they reproduce, your worms can as quickly suffer when exposed to incompatible environments. If you're noticing your worms dying off, keep out for some of the following:

All of the conditions mentioned above can cause your worms undue stress. If you notice your worm numbers dwindling, be sure to look over your tumbler to ensure that it's still a healthy environment in which your chosen species can live. 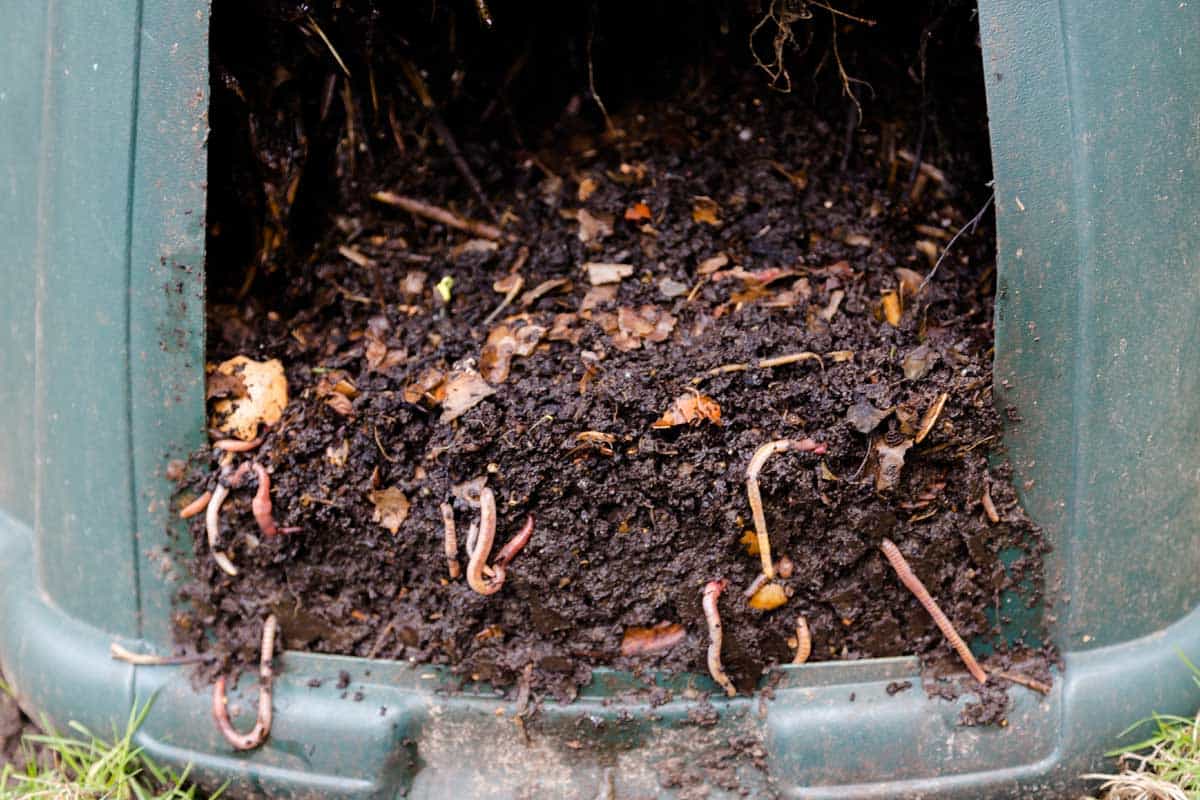 Red worms are just as voracious in the wild as they are in your compost tumbler. That said, they prefer food that's already in the process of decomposing. If you have red worms in your garden, then you don't need to worry about their presence. Red worms will rarely eat the roots of your plants. If they start, you may have a nutrient shortage on your hands, in which case you'll need to re-compost your garden as soon as possible.

Surprisingly, there are some foods that compost worms will actively avoid. These food types often contain chemicals or nutrients that will cause worms harm. Nature, then, will have taught the worms to stop themselves from consuming these foods.

For example, most compost worms will actively avoid eating potato peels. Why? Because potato peels are high in solanine. Solanine is a natural pesticide that will kill the insects that eat it.

That said, you don't have to leave potato peels out of your compost tumbler. These peels typically decompose on their own time and will provide your compost with additional nutrients. They may decompose more slowly than the rest of the waste in your tumbler.

Banana peels do not contain solanine or any other chemicals that would make them harmful to your compost worms. That said, you may still want to keep them out of your worm tumbler. Banana peels are especially thick - from a worm's perspective. While your compost worms will try to eat through a banana peel, it will take them an exceptionally long time to do so. By the time they have, any fruit you've left inside the peel will have gone sour, and the worms will likely avoid it.

If you're going to put a banana into your compost tumbler, make sure you've separated the peel from the fruit. Worms will happily eat the peel on their own time, and they'll make quick work of the fruit. It's when the two are put in together, and the banana is bruised beyond recognition, that it becomes a problem.

Coffee is an international delight. As it turns out, humans aren't the only critters that enjoy it. If you're looking for an environmentally-friendly way to dispose of your coffee beans, then you'll love having a worm tumbler on your property.

Compost worms love coffee grounds. They enjoy the taste to the point where academics at Cornell University recommend lining compost bins or piles with them to attract worms. As such, don't feel bad about throwing away damp grounds. You'll be breaking up your worms' diet and giving them a tasty treat.

Whether you're new to the world of worm composting or you've heard about it before, consider introducing these critters to your compost tumbler. The tumblers will provide them with the perfect habitat to flourish. As a result of their integration, your compost will decompose faster, and you'll have more frequent access to nutrient-rich soil to use on your property.