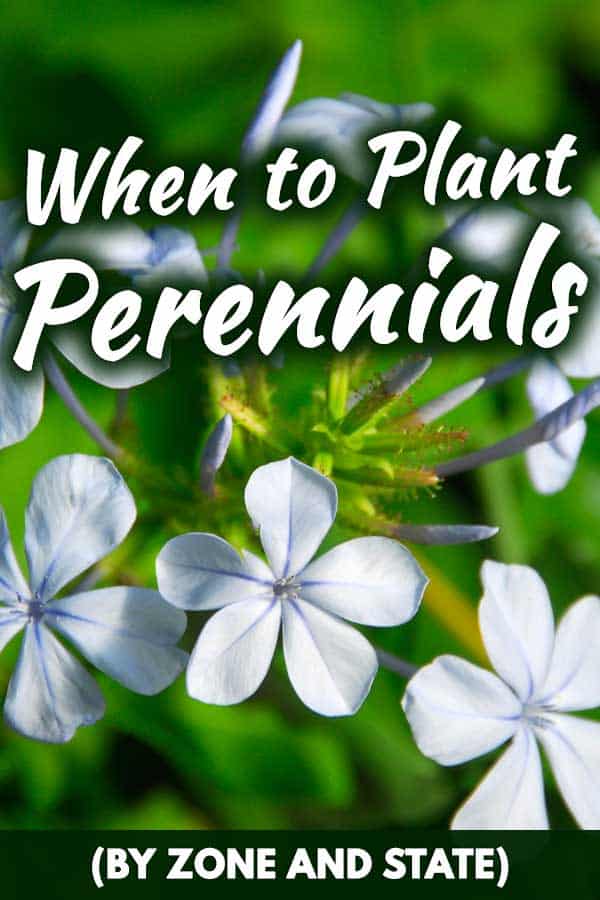 When you think of gardening, what time of the year do you think of? Many people think of springtime, but that does not have to be the case. Depending on your USDA hardiness zone and the specific plants you are using, fall may be a better choice.
Zones 1 through 3 have a very short planting window due to the frigid temperatures. Plant in the warmer times of the year. Zones 4 to 7 it is best to plant a few weeks before the first frost. Zones 8 to 11 can plant perennials almost any time of the year but it is best to plant when it is cooler.

Based on average frost dates, the best months to plant perennials in North America by zone are:

Let's take a deeper look into why this is and some good plants by and state. We will be taking a deeper look at Florida, Texas, California, New York and Pennsylvania.

What are USDA hardiness zones?

USDA hardiness zones, also known as growing zones, give gardeners an idea of what plants do well in their climate. There are 13 zones in total. Zone 1 is the coldest (minimum temperature of -50 to -60 degrees Fahrenheit) and zone 13 being the hottest (minimum temperature of 60 to 70 degrees Fahrenheit). North American falls into zones 1 to 11. Not sure which zone you are in? Check out the interactive map here.

When to Plant Perennials in Florida

Florida is in zones 8 to 10 with a few parts of it falling into zone 11. Perennials can be planted at any time during the year. Generally, it is a good idea to plant in the cool times in the year so the plants have time to grow before the blistering heat of summer.
Since Hardiness zones 8 and 9 can drop below freezing, it is best to plant in April or September. April is safely after the last frost and before the heat of summer. September is the opposite, being before the first potential frost and after the heat of summer.
Zones 10 and 11 do not usually get a freeze, so it is safe to plant in the cooler months of November and December.

A great plant for all zones in Florida is basil (Ocimum basilicum). Basil is a hardy plant from the mint family with a wide array of uses. While some are perennials, others are annuals so read up on varieties before choosing a plant. Sweet basil is my personal favorite.

Roseleaf Sage (Salvia involucrata) is well suited to hardiness zones 8 to 11 so it can be planted anywhere in Florida. It does not do well with freezing making it perfectly suited to the hot Florida temperatures. Although it belongs to the sage family it is more noted for its flowers than its herbal properties.

When to Plant Perennials in Texas

Texas is in zones 7, 8 and 9 so September is a good month to plant across all of Texas. It is before the first frost but also cooling down. Planting in September gives perennial roots a headstart before the frost and prepares them for the harsh summer.

Perennials can be planted at any time in zones 8 and 9. However, planting in September or April is best based on the average frost date. As long as you plant a few weeks before the first frost date your plants should grow well.

Texas A&M Agrilife has done extensive research to find plants that perform well in the state and are good for the environment. For the full list visit the Earth Kind site.

Blue Princess Verbena (Verbena X hybrida ‘Blue Princess’) has striking blue flowers and requires little maintenance. It is also resistant to powdery mildew which is a big plus. Powdery mildew is not only bad for the infected plants but also unsightly and hard to get rid of.

Texas Gold Columbine (Aquilegia chrysantha hinckleyana ‘Texas Gold’) blooms in early spring and has beautiful yellow flowers. It performs well in shaded areas but is hardy to the heat.

When to Plant Perennials in California

For zone 5 September is the latest perennials should be planted for risk of getting to close to the first frost. In zones 6 through 9 September is a good point to start planting perennials to avoid the harsh summer heat. In zone 10 Perennials are best planted in the cool winter months.

Lillian’s pink coral bells (Heuchera ‘Lillian’s Pink’) is a plant native to California with low water needs, beautiful pink flowers and the ability to thrive across the various hardiness zones.

Yarrow (Achillea millefolium) is an extremely hardy plant, and one of the few that can survive the full spectrum of California's climate. It can survive hardiness zones 3 through 10, an impressive feat! It has a wide array of uses, from its beautiful flowers to its herbal properties. Be aware that it can be invasive so it is best to confine it to a pot if possible.

When to Plant Perennials in New York

New York has hardiness zones ranging from the frigid zone 3 to the temperate zone 7. September is the ideal month for planting perennials across the state. It is before the first frost in the cold zones and perfect for when the warmer zones are beginning to cool off. For Zone 3 it would be safer to plant in early August to safely avoid the first frost.

Ladybells (Adnophora Liliifolia) is well suited to zones 3 through 9, making it perfect for anywhere in New York state. It is a tough plant with purple-blue bell-shaped flowers. They are very prolific and will happily spread through your garden if not kept in check.

Bee Balm (Monarda punctata) thrives in the sun in zones 3 through 9. Not only is its flower beautiful and great for pollinators but the plant also has notable healing properties. Although it is traditionally a perennial, be careful to avoid annual varieties when buying a plant.

When to Plant Perennials in Pennsylvania

Again, September is generally a "happy medium" time to plant perennials in Pennsylvania. However, in zone 5 it is important to make sure the first frost does not come early. If it is predicted to, it is better to plant in late August.

Butterfly weed (Asclepias tuberosa) is native to Pennsylvania and, as its name suggests, is great at attracting butterflies. The plant does best in full sun and yields brightly colored flowers. It is easy to grow.

Virginia bluebells (Mertensia virginica) are from the Borage family and are another Pennsylvania native. Hardy across all zones in Pennsylvania and a notable wildflower, the plant is seen dotting the countryside or on nature trails.

Is it Better to Plant Perennials in Spring or Fall?

You can plant perennials in late summer, early fall or spring. In general, fall is a better time to plant perennials. Planting in the fall allows plants time to grow and prepare for the winter.
By getting the plants in the ground before it freezes, you give them a chance to grow while the ground is still warm. Planting in the Spring it is the opposite situation. The plants are dormant until the soil warms up enough.
Each zone, region and plant have specific needs. Do your homework and research before planting.

How Late Can You Plant Perennials?

Learn Your Zone for Best Results

All in all, USDA hardiness zones determine which are best suited to certain environments. Contact your local Master Gardeners for more information on your specific area. We hope this guide was helpful for picking when to plant your perennials!

Looking for more information on perennials? Check out some of our other posts: