Pink flamingos have been a favored lawn ornament since the late 1950s, but you may be wondering if they have any special meaning. We have done some research on pink flamingos and found out some fascinating info.

People like to express themselves in their outside space, and putting pink flamingos in your garden or yard is one way to do it. Pink flamingos placed in your yard mean various things to homeowners and onlookers. Below are some areas in which pink flamingos have significance that we will further discuss.

Keep reading to learn more about the importance of the pink flamingos often seen in yards and gardens. We will explore many aspects and meanings because there isn't just one. These colorful birds mean specific things to different groups of people. 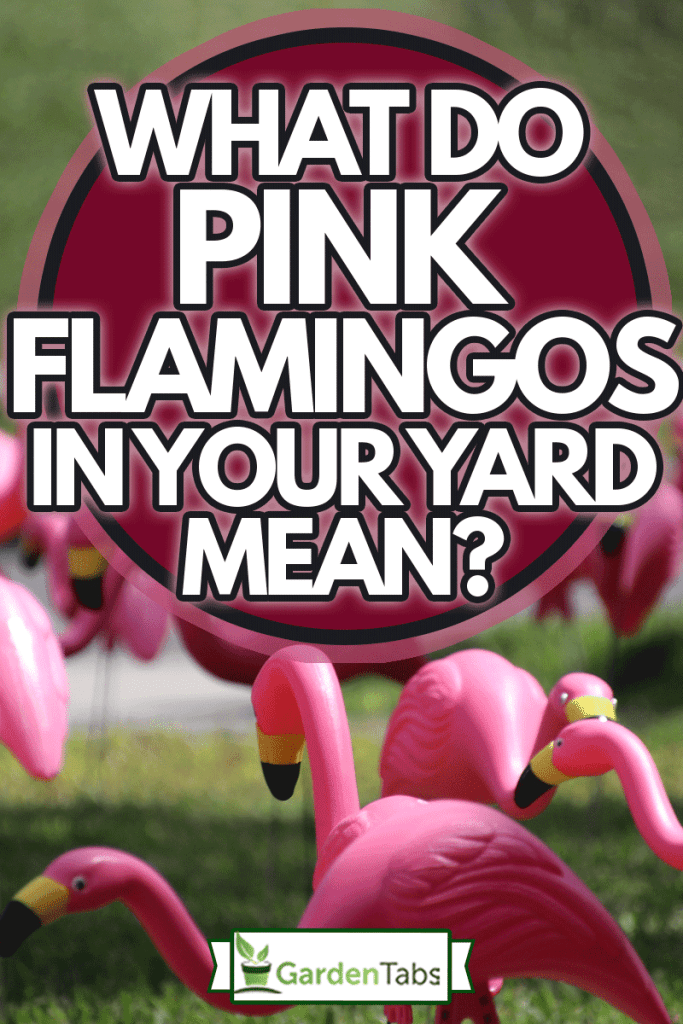 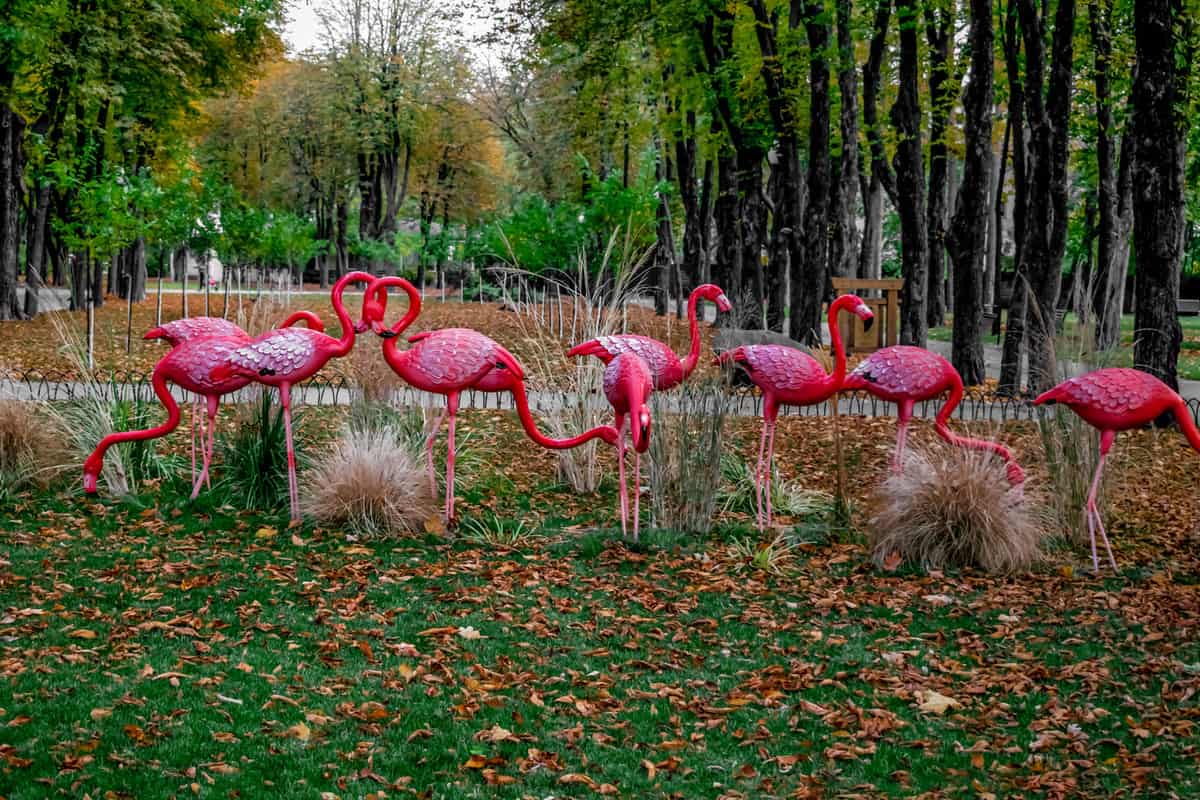 When the plastic pink flamingo first came out in the late 1950s, it was an instant hit with middle-class working Americans. Subdivisions were becoming a new normal for housing, but the homes were often identical and lacked distinction and character. The pink flamingo offered a way to dress up a yard and give it some uniqueness.

Pink flamingos are also a symbol of summer fun and indicate that the homeowner may be dreaming of warm sunshine, salty air, and sandy beaches. Adding flamingos to your yard is one way to experience a tidbit of the tropical lifestyle.

If you are a fan of plastic pink flamingos, you probably have a unique sense of style and aren't easily influenced by what others think. You are confident and like to stand out from the crowd rather than blend in. You know what you fancy and aren't afraid to show it.

Even though the original manufacturer has closed, the plastic pink flamingo is still a yard ornament staple. Vintage versions that once sold for $2.76 per pair now sell for top dollar, but knock-offs are readily available.

If you aren't a fan of plastic, flamingo yard art has evolved to include metal artwork and sculptures in various sizes, mediums, and designs.

If you are looking for pink flamingos for your yard, consider these made from the original Featherstone mold.

If you wake up one morning to find a horde of plastic pink flamingos hanging out all over your lawn, you've probably been flocked by a local charity or organization sponsoring a fundraiser.

The premise is that an organization will come in under cover of darkness and cover a homeowner's or business owner's yard with a vast pat of plastic pink flamingos. The organization responsible will then happily return to remove the colony for a donation to their stated cause.

For an increased contribution, you can have the flamboyance moved to another yard of your choosing. And for even more money, you can ensure the birds don't return to your yard.

It's all in good fun but effective. Most people don't want an enormous flock of pink plastic flamingos hanging out for too long and ruining their curb appeal. So, they comply and make a donation.

However, if someone doesn't want to contribute or is financially unable, the organization will remove the birds at no charge. 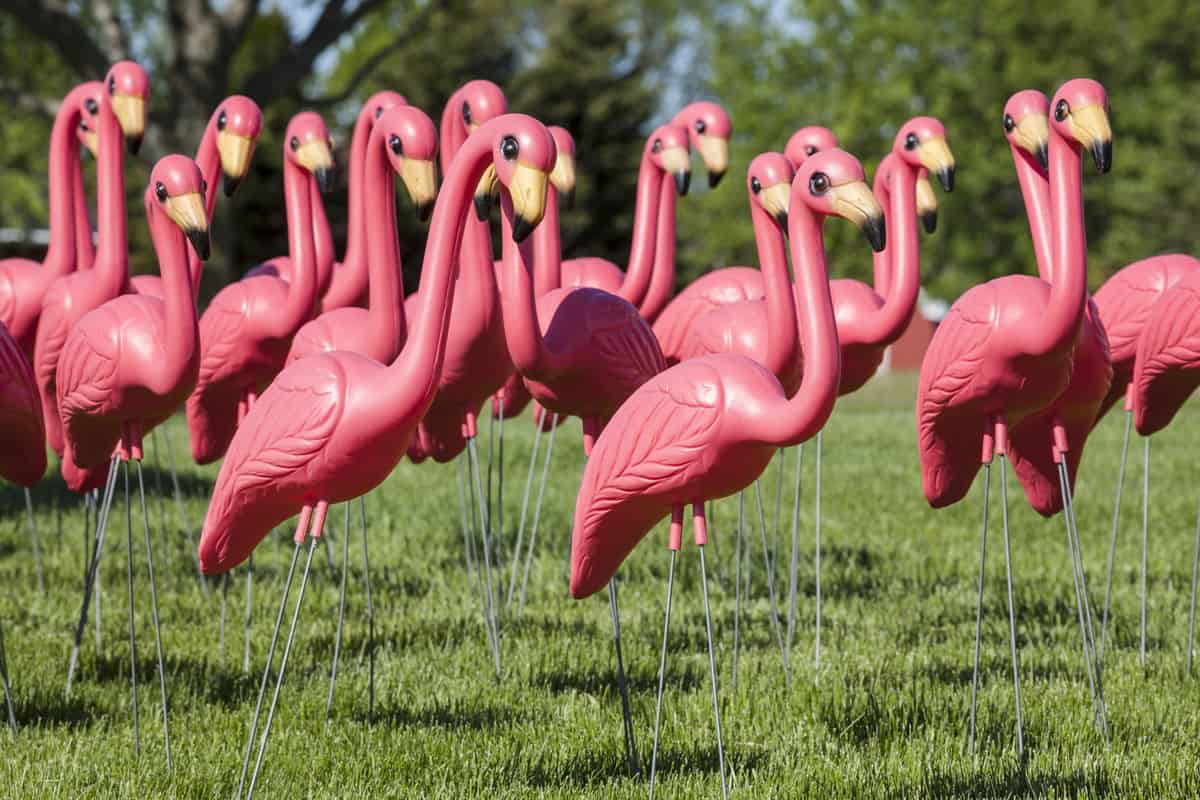 The pink flamingo is iconic and part of American history and culture. Those who choose to display the unusual birds are taking part in an American tradition.

The iconic plastic pink flamingo was created in 1957 by an art student, Don Featherstone, at the request of the Union Plastic Company. Due to his northern location, Featherstone used a National Geographic photo shoot rather than the actual bird as inspiration.

No one would know how popular his 3-D creation would become then and now, even though its popularity had ups and downs throughout history.

The pink flamingo's initial success began to wane during the Woodstock era due to a public outcry against the use of plastics. It even caused the popular retailer Sears and Roebuck to stop carrying them.

Then in the seventies, a movie by John Waters titled Pink Flamingos hit the big screen. While the film had nothing to do with the long-legged yard ornament, it skyrocketed the pink tchotchkes back into popularity as a symbol of rebellion and bad taste.

By the 1980s, pink flamingos had officially been deemed as art and climbed into high society social circles. Social societies and clubs emerged to celebrate the pink flamingo and its tongue-in-cheek classiness. Even the Los Angeles Museum of Contemporary Art's gift shop sold the coveted lawn decor.

A vintage pair of pink flamingos even landed in the Smithsonian National Museum of American History to represent Americana culture. The pink flamingos are originals made from the original Featherstone mold and include his signature.

While not currently on display, the pink flamingos are an official part of the museum's collection.

To commemorate the pink flamingo, the mayor of Leominster, Massachusetts, deemed June 23rd as Pink Flamingo Day. The holiday was instituted as a tribute after the Union Plastic Company closed in 2006.

However, they sold the original mold design to another manufacturer before closing, so the authentic favorite pink plastic trinket is still available for sale today.

The plastic pink flamingo has broken barriers and crossed into many social circles, withstanding the devotion and scorn of many generations.

This longevity has allowed the icon to leave a marker throughout history, pop culture, and even art, making it a lasting representation of American culture and celebrating diverse ideas. 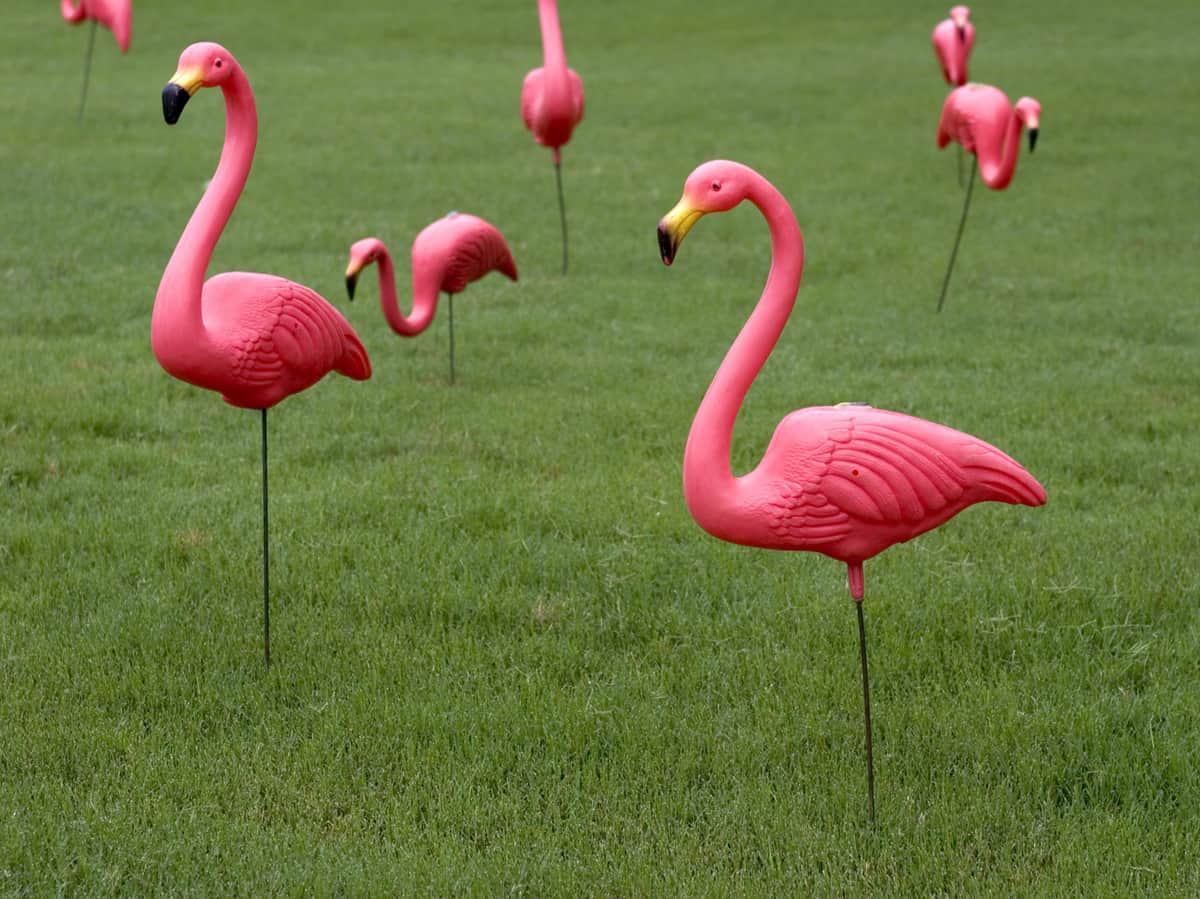 Flamingos are considered spirit animals, so if you discover a real flamingo in your yard, the meaning may be a message from the universe. This meaning is spiritual and much more profound than any meaning attached to the plastic variety.

Flamingos are social birds with incredible natural beauty. Therefore, if you are attracted to them, you may also be very social and attracted to fun and adventure. You may like to explore new things and achieve goals.

Some believe that pink flamingos signal tenderness, and therefore, those attracted to them have a large heart and like to perform good deeds for others. Therefore, if a flamingo approaches you, it may sense your do-good quality and be naturally attracted to you.

Pink flamingos are also thought to signify a future event and a sign of luck and positivity. So, finding one in your path could mean that attractive opportunities are heading your way.

Flamingos can also bring solemn messages that signal you need change. Flamingos are bold, strong animals that can survive harsh conditions and don't easily give up.

If a flamingo is in your yard, the universe could be sending you a message that you need to face your fears, build courage, and overcome any shyness and anxiety to bring balance to your life.

It can also mean that you need to develop patience and find allies that you can trust to help you achieve your goals.

Some online buzz indicates that pink flamingos on your lawn signal that you are part of the swinger community. However, this claim is difficult to substantiate and probably not widely known outside certain social circles.

If you treasure your pink flamingos, don't let concern over this claim force you to remove them. Even if it is a signal for a small, diverse community, it's improbable that strangers will knock on your door and attempt to solicit anything from you solely because you have pink flamingos hanging out in your flowers.

Why Are Lawn Flamingos Popular? 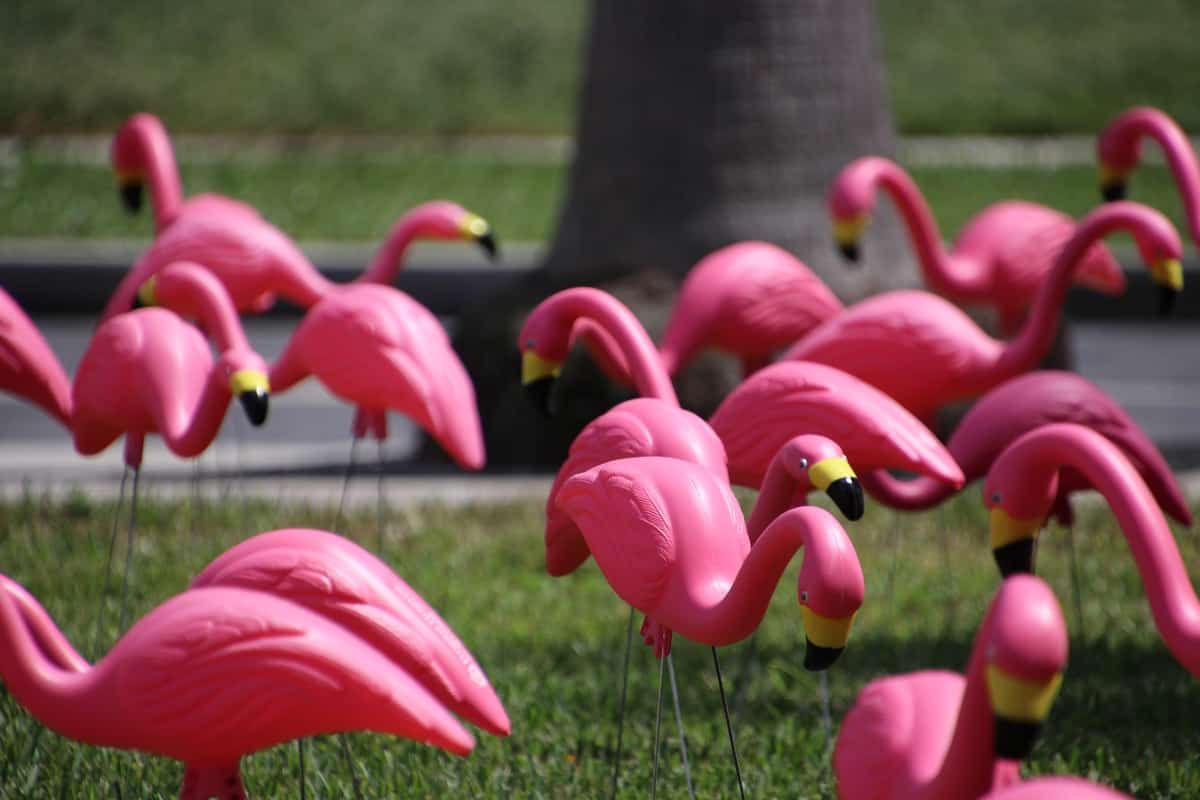 Lawn flamingos are popular because people adore them and everything they represent. While that meaning may be different for various social groups, pink flamingos are symbolic. They are unique, which makes them attractive to some and tacky to others, but they are loved for both traits.

Pink flamingos are the poster child for tackiness, which ultimately turned them into a cultural icon. People either love pink flamingos or hate them. Either way, they are infamous and probably not leaving yards any time soon.

Some people love tacky and the attention that it draws in. Others embrace tacky as a sarcastic way to point out their refinement and social status ideas. Either way, the big, pink boisterous birds make a bold statement.

Let's face it; you have to live up to your name when you are known in quantity as a flamboyance. 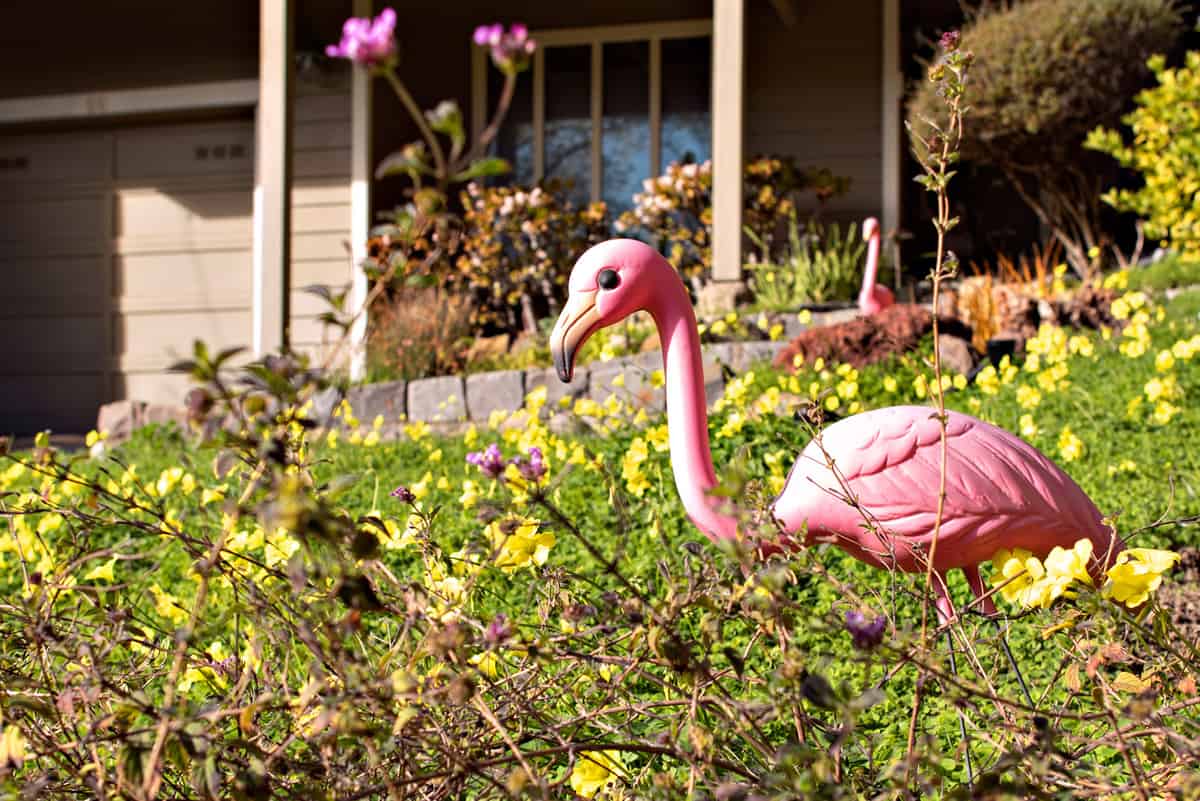 Pink flamingos have graced yards across American neighborhoods for many years. While their popularity comes and goes, these birds always resurface. The meaning behind them can vary among groups, but if you love your pink flamingos, just put them out and celebrate their beauty and whatever meaning they represent for you.

If you want to do some landscaping to improve your yard, consider reading 30 Tall Thin Plants For Landscaping Your Garden or Backyard.