The sap of the maple tree is invaluable because it can be transformed into delicious maple syrup. However, did you wonder if maple tree sap can go bad if it is not immediately processed or stored for some time? We researched maple tree sap, its beneficial properties, and what could cause this nutritious and refreshing liquid to spoil. Learn ways to properly store maple tree sap and how long it lasts in different conditions.

Expect maple tree sap to last a minimum of a week if stored at 38 degrees Fahrenheit or colder after it is collected. The sap should be boiled before it is consumed to deter any bacterial growth. When maple sap is left out for too long, it will display signs of spoilage via a cloudy appearance and an off-taste. Clear to lightly yellow tree sap is okay and can be used, but murky sap is most likely spoiled.

Discover fascinating tidbits about maple sap, transforming it into tasty syrup for pancakes, and recognizing signs it has become spoiled. 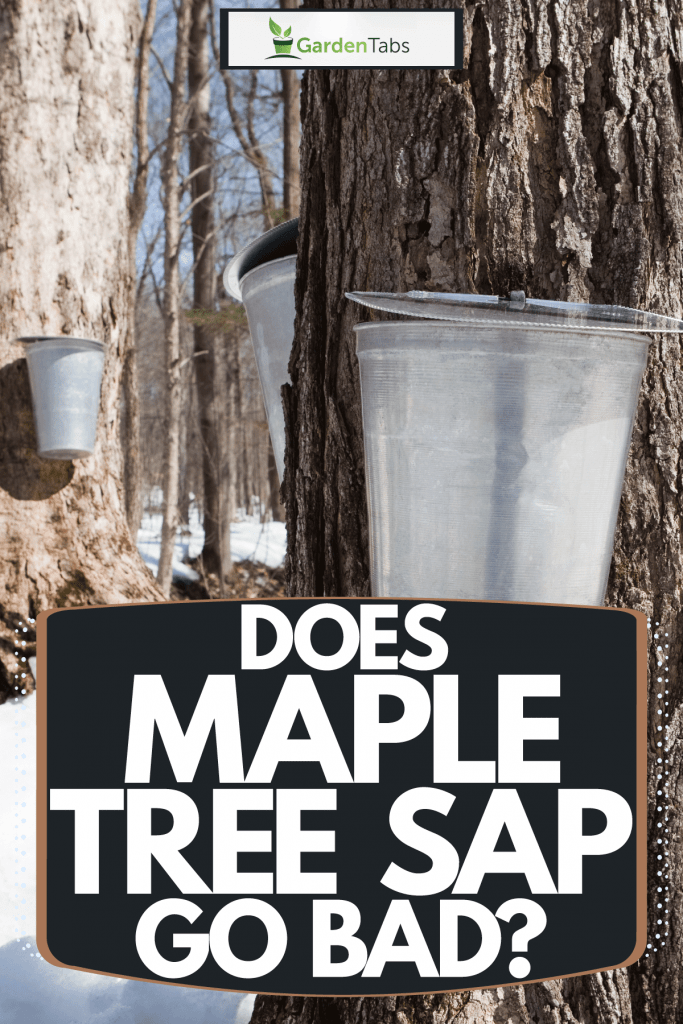 All About Maple Sap

The sap of the red maple, black maple, sugar maple, and other trees can provide a naturally sweet, nutritionally packed liquid that can be boiled and processed into maple syrup. However, it is essential to learn how to properly keep maple sap, its shelf life and understand signs it is spoiled and no longer viable for use. Collected tree sap is sweet and clear in color.

But, it may become slightly yellow over a few days in storage, which is normal, or if the sap was collected while the tree was budding. If the sap is not murky or very cloudy and does not smell like it is sour, fermenting, or off it can be safely used.  Blooming bacteria in sap causes cloudiness and off smells and taste. 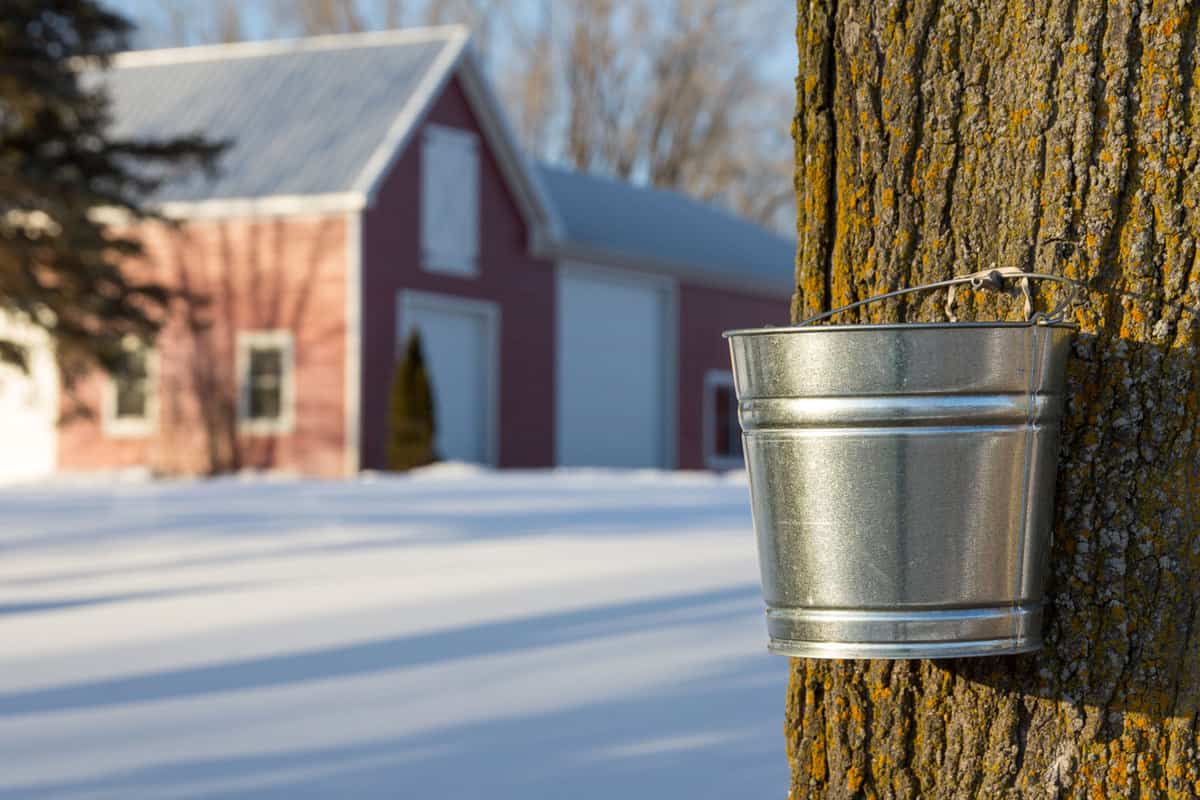 If you are still unsure if your maple sap is worth using, go ahead and boil it. If the smell emanating from the boiling sap makes your stomach turn and flip, it is most likely bad. Note, some people will process tree sap that is cloudy for processing grade syrup, but it won't be palatable on food.

How Can You Tell If Maple Sap Has Gone Bad? 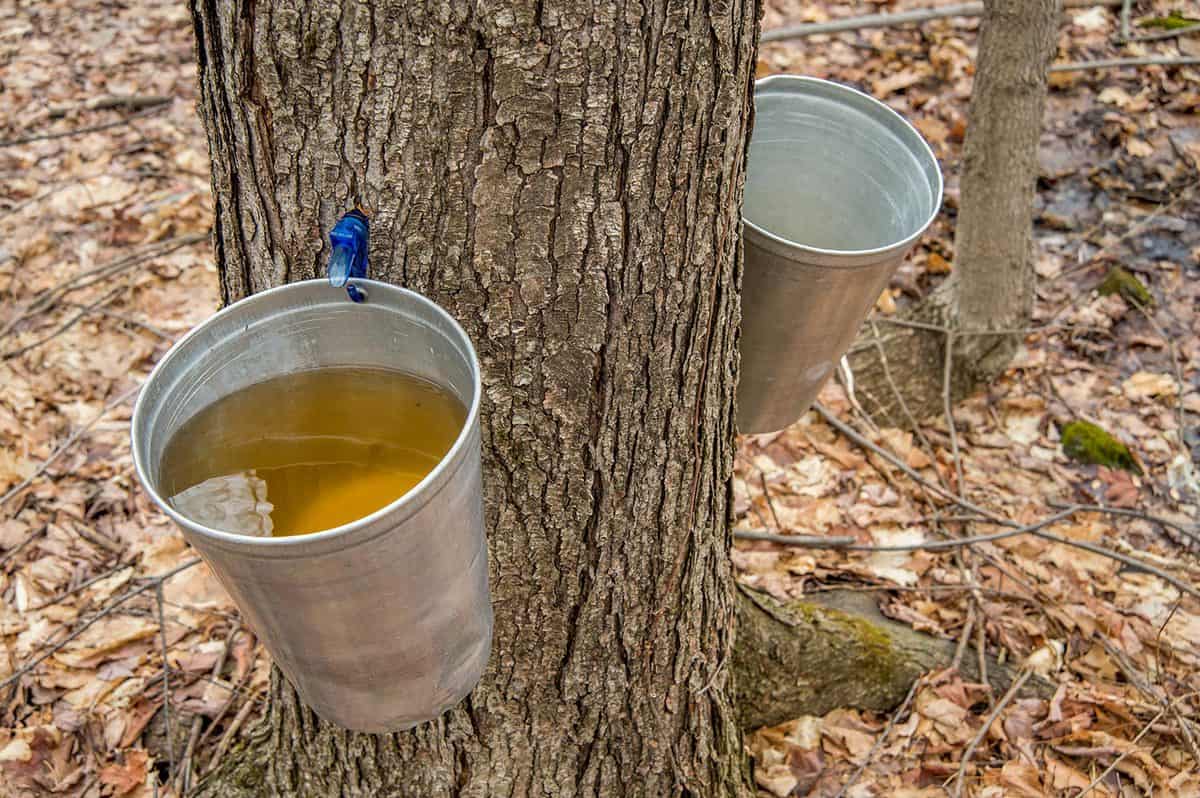 Maple sap that has been stored improperly is left too long unprocessed or has spoiled will develop a murky quality to it. Additionally, the sap may taste yeasty, off, or have a sour, foulness to it. If you decide to use spoiled maple sap to make syrup,  it will undoubtedly impact the flavor, taste, and quality and be a waste.

Keep maple syrup in cold conditions, around 32 degrees Fahrenheit, and store it in a clean, food-safe container. Maple tree sap lasts about a week before spoiling, but maple syrup does not spoil. However, maple syrup can develop crystallization or mold growth.

Buddy syrup is a characteristic of sap collected late in the season and may have an off-putting cabbage-like flavor. Sap collected that becomes deemed buddy syrup may be clear in appearance, but it is only when the sap is boiled and processed, the resulting syrup doesn't smell or taste good.

How Long Does It Take For Maple Sap To Spoil? 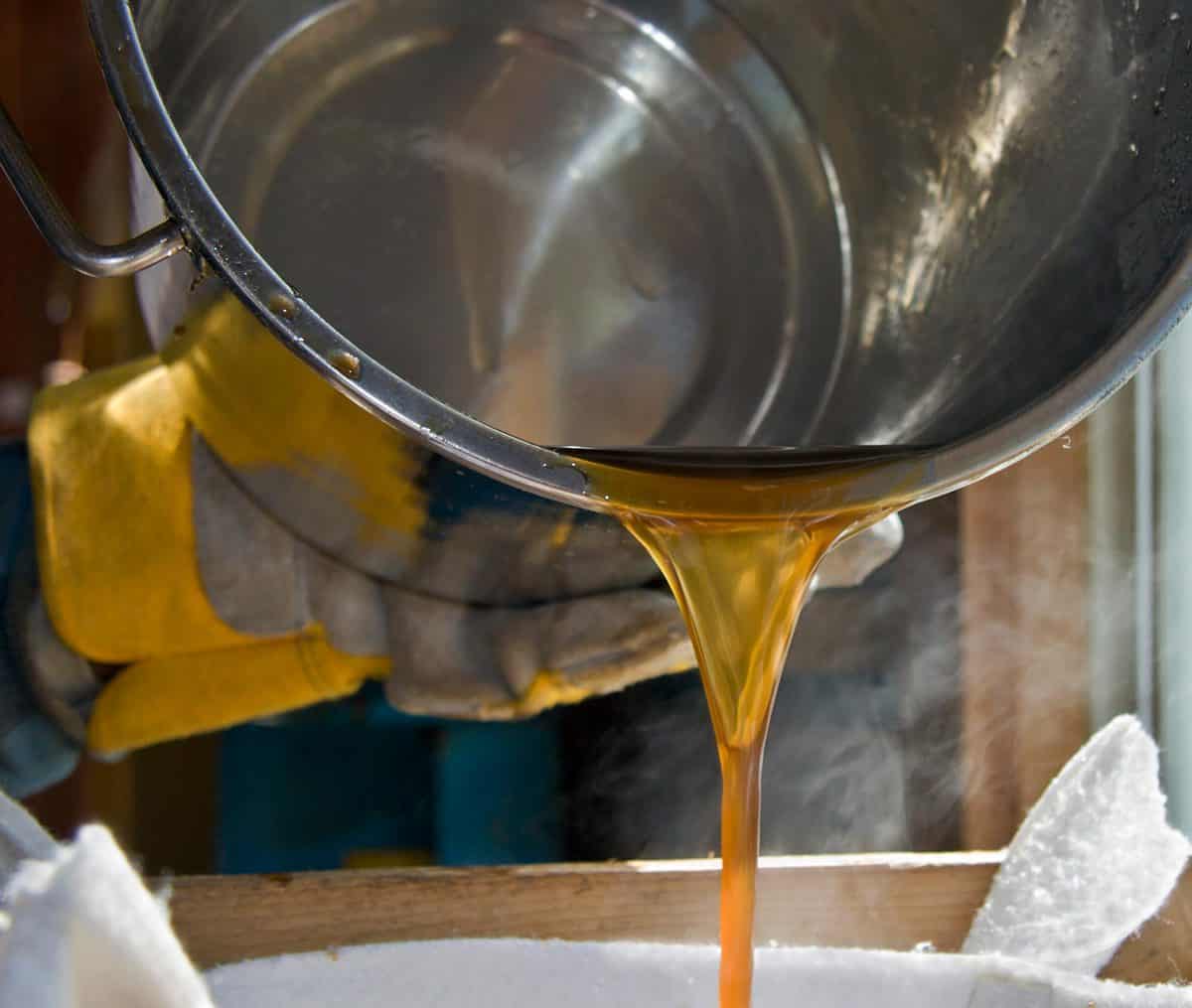 Usually, maple tree sap can only be collected for about three to four weeks before budding begins. Many sap collectors like to store as much sap as possible before boiling it into syrup, as it takes about 40 gallons of sap to get one gallon of syrup. After a week, maple sap is more likely to spoil, especially if it is not kept at sufficiently cold temperatures. Therefore, it is wise to store sap in the freezer or outside packed with snow while temperatures are still around freezing.

How Long Does Maple Sap Last In The Fridge?

Plan to keep maple tree sap like milk if you place it in the fridge. As long as the sap is maintained at a cold enough temperature, it will last around a week. After a week, the sap can succumb to developing bacteria, mold, foul odors and be unusable for making syrup. If you want a longer storage solution for maple sap, put it in the freezer.

Processed maple syrup should be stored in the refrigerator when it is not in use, but any mold it may develop is non-toxic. Also, thanks to the sugar concentration in boiled and processed syrup, it is similar to honey and not prone to spoilage.

Can I Freeze Maple Sap? 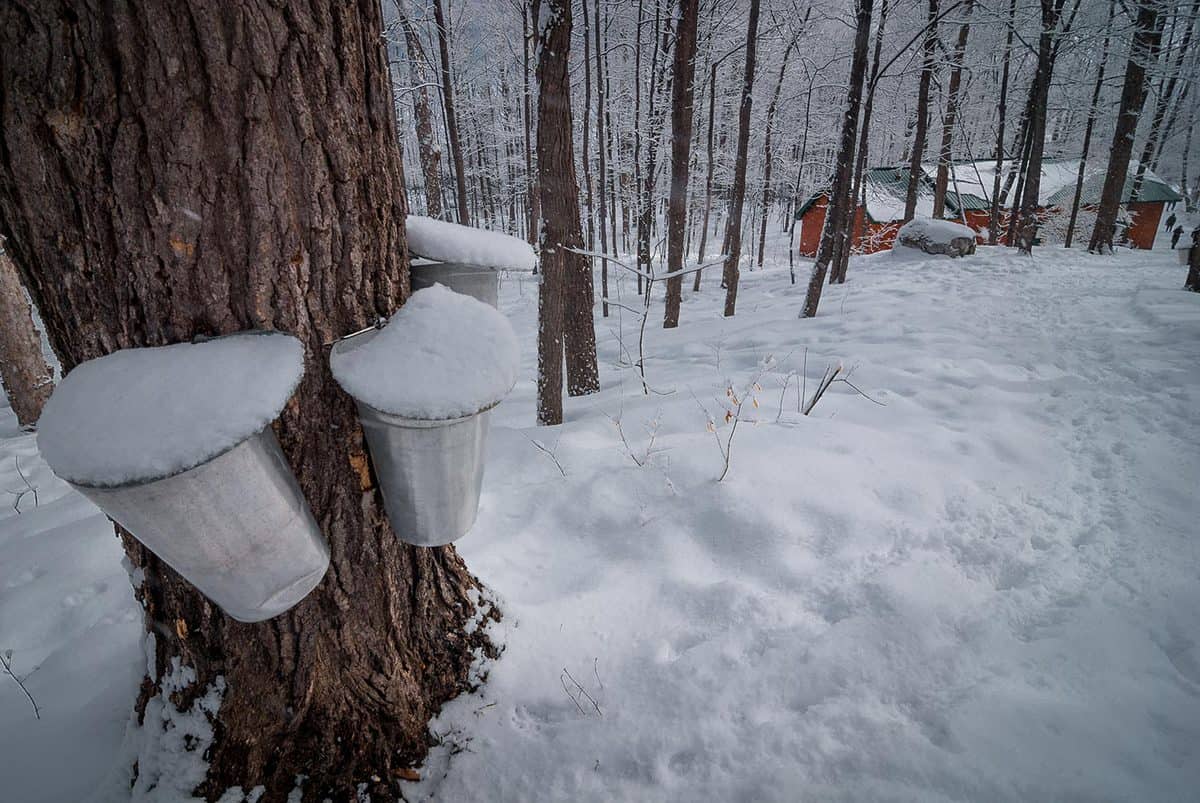 It is a safe choice to place maple sap in the freezer to retain its flavor, prevent bacterial growth, and collect enough sap until ready to process into syrup. Maple sap is best kept around 38 to 32 degrees or colder. It is desirable to store daily collections of tree sap outside in clean, food-safe containers packed in snow until enough is gathered to make sufficient amounts of syrup.

Keep maple sap from spoiling by storing it correctly in ideal containers, and look out for undesirable changes in its composition. Foul odors and cloudiness are tell-tale signs of spoilage.

Can Maple Sap Make You Sick?

Consuming maple tree sap that is no longer clear or slightly yellow, has clouds, or a sour taste or odor can potentially make you feel ill. Some people enjoy the benefits of drinking maple sap straight from the tree because it contains zinc, magnesium, and sugars. However, it is advisable to boil maple sap before consumption to kill any bacteria or yeast.

Avoid consuming maple sap that is older than a week or shows signs of spoilage. Boiling maple sap should not smell off-putting or make you feel sick to your stomach.

When Should I Stop Collecting Maple Sap? 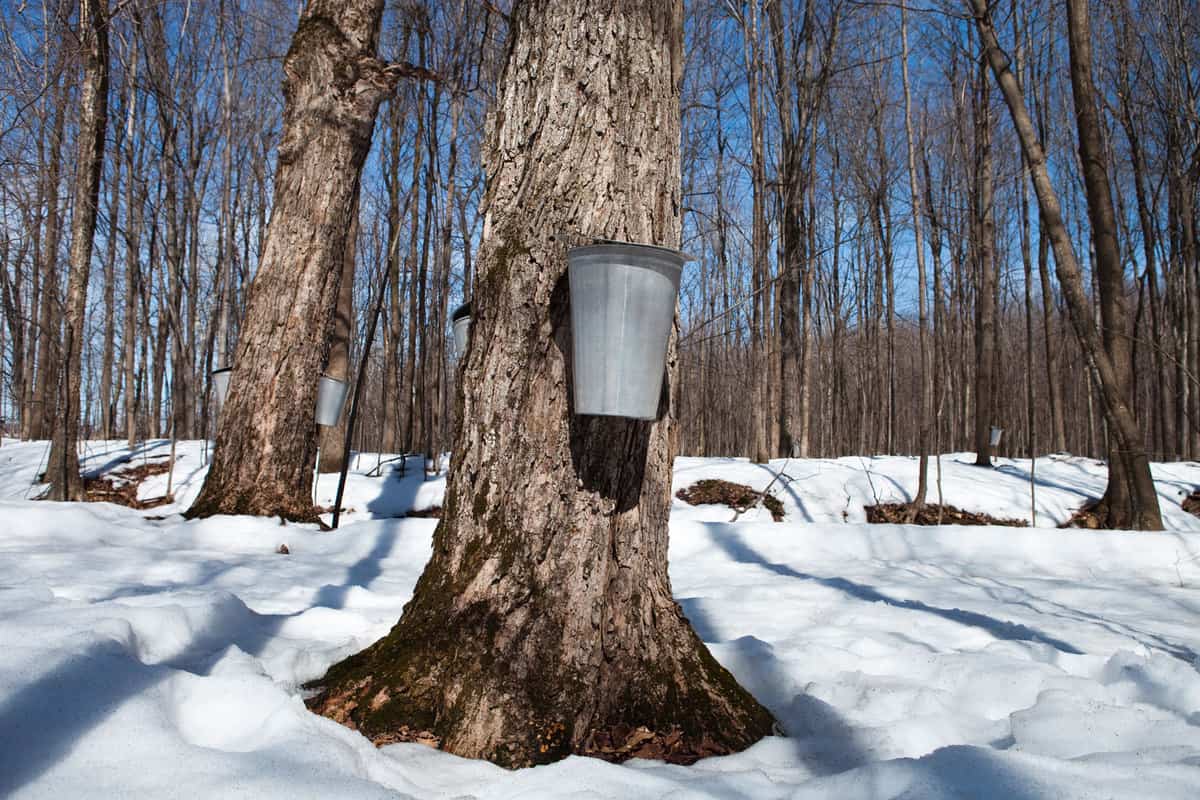 Plan to tap a maple tree during colder temperatures. Take advantage of optimal tree sap flows when the thermometer is around the low 20s at night and is in the 40s at day. Sap flow loves it when the temperatures are freezing at night for long periods, following a warmer day. However, if the nights and days are too chilly consecutively, this will hamper sap flow for collection.

When the temperatures stop dropping below freezing and the buds on the maple trees begin to swell and break, this marks the official end of the maple tree sap collection period. Maple sap is often collected for a period of three to four weeks. However, when collected sap begins to look more brown than clear or has a tinge of yellow, it's time to stop.

A tap placed in a maple tree will only be good for about 4 to 5 weeks until the spot dries and seals up. Avoid tapping a tree too early and project to do so between mid-February to early April when temperatures are ideal for collection.

We hope you have a better knowledge of maple sap, how to identify if the sap is spoiled or still good to consume, and more helpful info. Maple sap is indeed a treasure for humanity. Collected tree sap can be used to make clean, drinkable water provides nutritional benefits, and makes naturally sweet syrup to put on food.

Before you go, you won't want to miss checking out the following articles.

Read More: 15 Gorgeous Trees With White Bark [And Where You Can Grow Them]

Read More: How Much Does A Tree Weigh?