Cucumbers are a favorite addition to salads and can be eaten as a standalone snack. To grow tasty, quality cukes, you have to plant them properly. That being said, are cucumbers classified as a vining plant? Read on since we have researched if it actually requires a trellis to grow.

Cucumbers have two distinct growth habits. Vining varieties need a trellis to scale, while bush varieties can grow in garden beds or containers. Vine cucumbers grow best when climbing over supports primarily because of better air circulation. Letting the vines trail on the ground makes them susceptible to infestation.

Certain vegetation requires support or trellises to develop and produce crops. In this article, we will guide you about the difference between the two and how to grow and care for them. 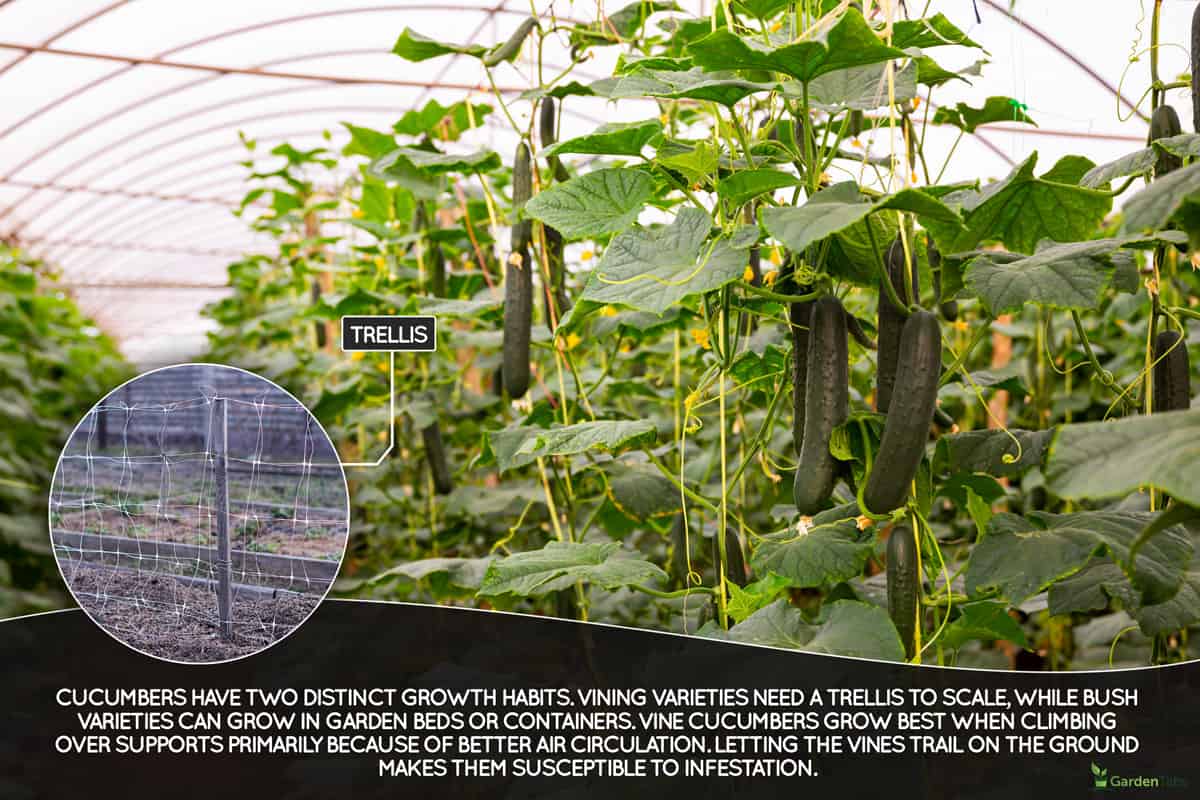 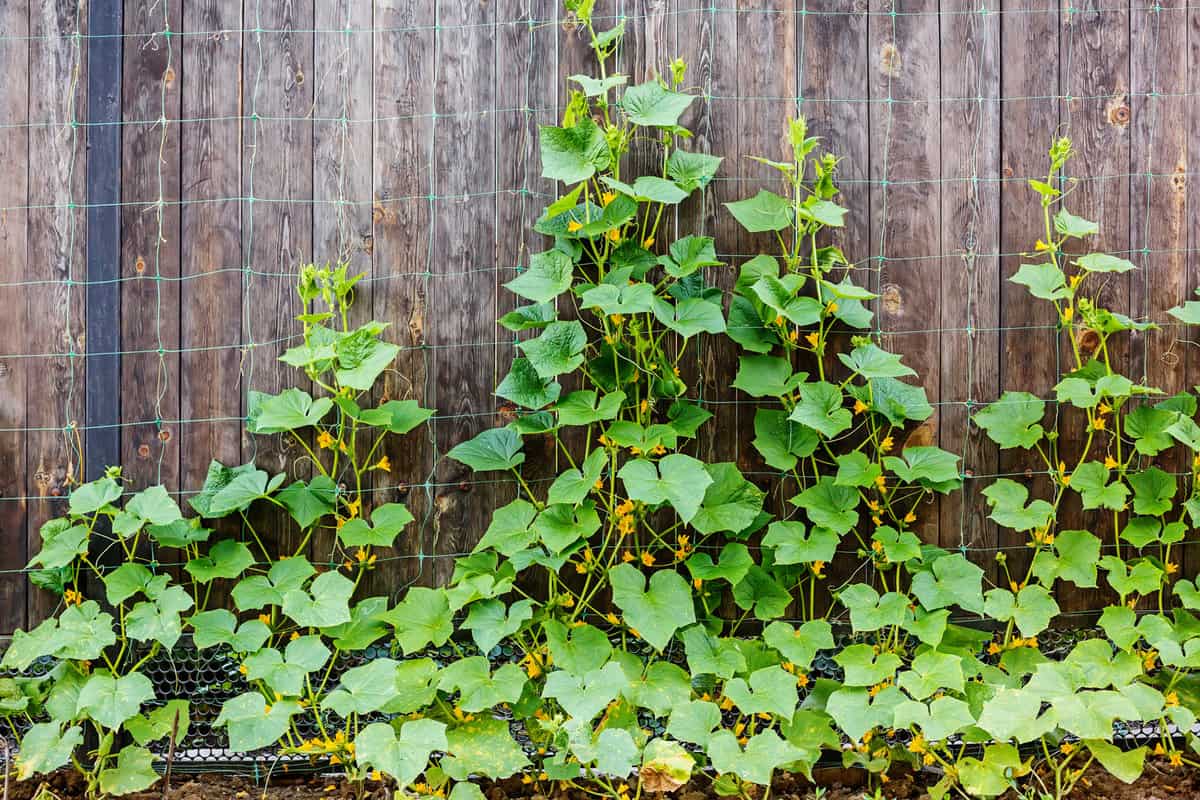 Vining varieties grow four to six feet tall and produce long tendrils that wrap around any structure in close proximity. They need a trellis for support. Installing one promotes a hearty crop and is less likely to become infected with diseases.

If properly taken care of, this cultivar will most likely be abundant in vegetation.

Where To Put A Cucumber Trellis?

Preparing your garden entails selecting a trellis suitable for your needs. Prebuilt trellises are available, but you can also design one by yourself. Make sure that the soil temperature, the environment, and the general climate is already appropriate for the crop to grow, survive, and develop.

Since cucumbers are tropical plants and prefer sunny environments, pick a planting space that receives full sunlight every day. You may also need to amend the soil if necessary to tailor fit it to its required growing condition.

Before installing the trellis, add a good amount of composted manure or compost on the garden bed. If the soil is too compact, you may add organic matter, peat moss, and compost onto the planting area.

What Materials Can I Use For A Trellis?

If you have already selected a trellis, begin laying out the support. The layout structure depends on your chosen material. To illustrate, pieces of metal mesh can be designed in a leaning position toward each other. Tie the topmost portion together using zip ties or metal wires. 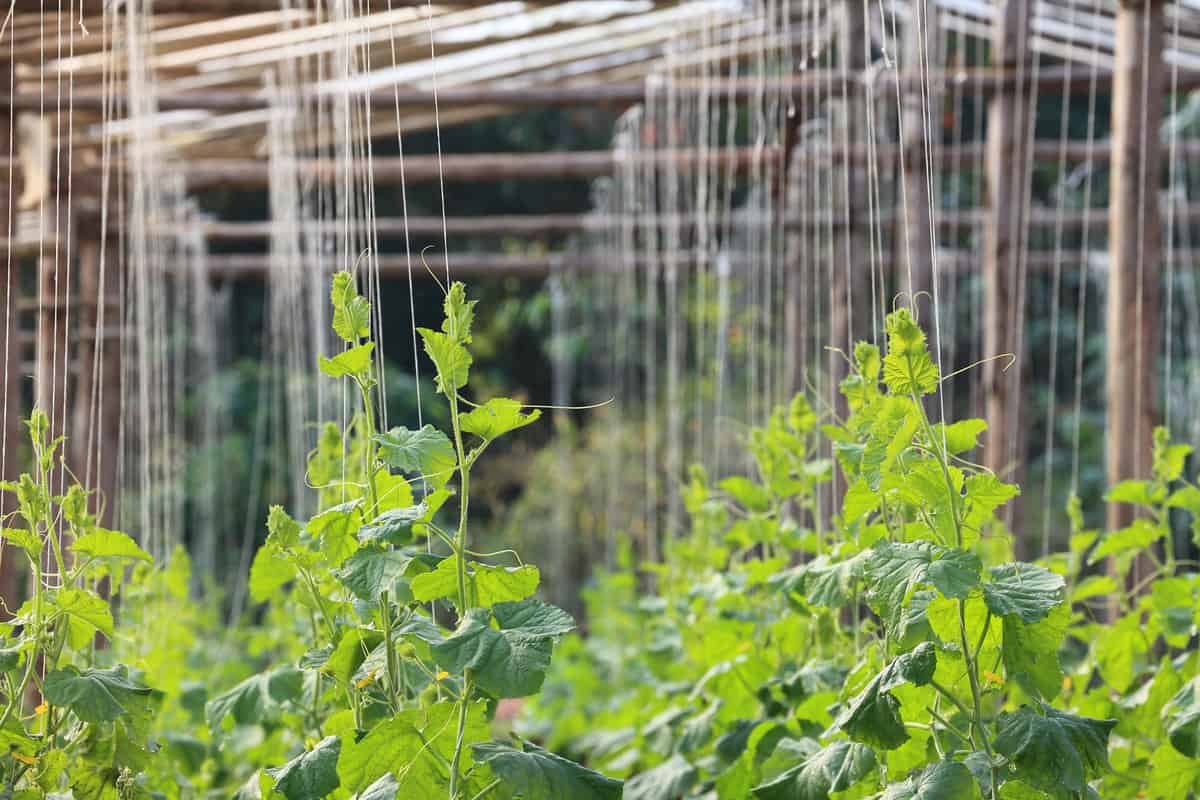 A string trellis can also be used for support. The wooden structure is installed on a raised garden bed lined with hooks in order to hang and support the strings where the cucumbers will grow.

It is suggested to utilize better-quality strings to prevent the trellis from being severed due to the crop's weight.

Other materials you can use as a trellis include plastic or nylon netting and chicken wires. The items are supported by two wooden or metal stakes placed on either side of the netting. Only purchase or install a mesh wide enough to accommodate the maturing crop.

Check out Trellis Netting on Amazon.

When To Plant Cucumbers?

Note that you should enrich the soil, and the trellis is already in place before sowing the seeds to prevent damaging the roots. If the soil temperature is low, cover the garden bed with black plastic or tarpaulin to warm the ground.

Plant the seeds directly on the garden bed in the late spring or start them indoors at least three weeks before the end of the final frost date. They should be spaced at least six inches apart for the former and a foot away from each other for transplanted seedlings.

Be sure to provide ample space and area for the vegetation to grow and mature. A space that is too cramped will create a shade that may lessen sunlight exposure and cause fungal infections.

How To Care For Cucumber Vines

Cucumbers need at least six hours of sunlight in order to thrive, so plant them in an open space within the garden.

The foliage of the vines acts to protect and shield the vegetables from heat but needs their energy for photosynthesis. To produce adequate yield, make sure the plant canopy filters excessive light but allows enough amounts to penetrate.

Hydrate them twice a week to keep the soil moist but not drenched, cucumbers contain a lot of water and may dry or wilt when the soil becomes arid. Try not to saturate the leaves and water directly onto the ground to prevent aphids and mealybugs from infesting the crops.

Use fertilizers low in nitrogen content since excess of this nutrient stimulates leaf growth and lessens fruit productivity. You may fertilize the soil before planting or add a layer of mulch for additional nutrients and to retain soil moisture.

If the tendrils begin to develop, gently train and weave them through the net. At this point, the tendrils cannot latch itself to the trellis yet. Don't worry! Wait till the vine is fully matured.

When To Pick Cucumbers From Vine?

Cucumbers should be harvested before they are fully matured and turn yellow. During peak yield, the vegetation produces crops in large quantities, so you may need to reap the cucumbers more often to increase plant productivity and maintain better yield quality.

The specific type of cultivar determines the exact moment when cucumbers are harvested.

Do not simply pull the crops off the vine since the action alone can cause damage. It is easier to use a clipper, cutter, or a knife when removing the cucumbers. Additionally, never delay harvest and keep on picking. Mature plants tend to stop producing yield at some point. 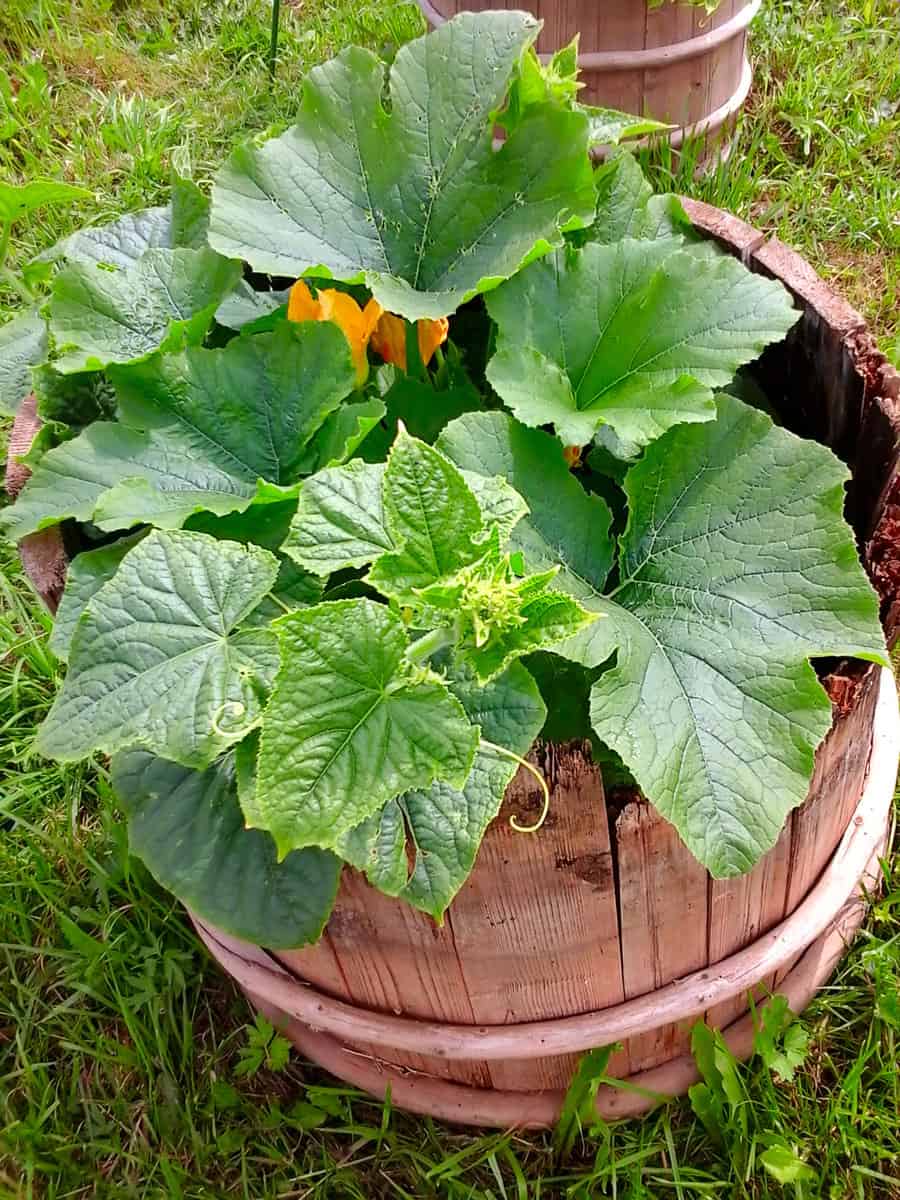 Bush cucumbers are cultivars that mature into a bush and grow up to one or two feet tall, and as such, they do not need a trellis for support. The plant is perfect for a garden with relatively small spaces, especially since they do not take up much of the area.

You can choose whether you prefer the vegetation to grow in a raised bed or a container. Either way, proper planting, care, and maintenance all factor in the process to evidently produce better quality yield.

How To Plant Bush Cucumbers In Raised Beds

Before you begin sowing the seeds, create a mound or a hill one or two feet apart and space each row at least three to five feet away from each other to facilitate the crops' growth then plant two to three seeds an inch deep into the mound.

Once the vegetation has reached a few inches tall, they should be pruned or thinned. Thinning is necessary to promote rapid growth, and stimulate fruit production.

If you are transplanting, carefully remove the seedlings from their container and place them in a four-inch deep hole that you have dug on your raised bed. After planting, water the seedlings regularly.

How To Plant Bush Cucumbers In Containers

Container planting basically follows the same concept as to sowing in a raised bed, the only difference lies within the vegetation's growing medium. Place three seeds half-inch deep onto the potting mix then cover it with soil. Water the pot immediately after planting.

The crop's hydrating requirements vary in terms of consistency. Container-planted bush beans need constant watering. The soil should always be moist, otherwise the fruit will taste bitter if left too dry or parched.

What Happens If You Don't Trellis Cucumbers?

Vining cultivars without a trellis to support them will produce more misshapen fruits, be more prone to diseases and fungal infections, and will most likely produce less yield.

Cucumbers are warm-season crops that prefer full light exposure to live and thrive. When the vines mature, the foliage thickens, and as such, sunlight needed for photosynthesis will be limited. Training them on a trellis will alleviate this problem.

A wet foliage will attract pests and diseases. Since the plant grows on the ground, this will most likely be the case if the vegetation is exposed to rain and hydrated without a trellis. Vining varieties grown with a support feature better circulation.

When Should You Trellis Cucumbers? 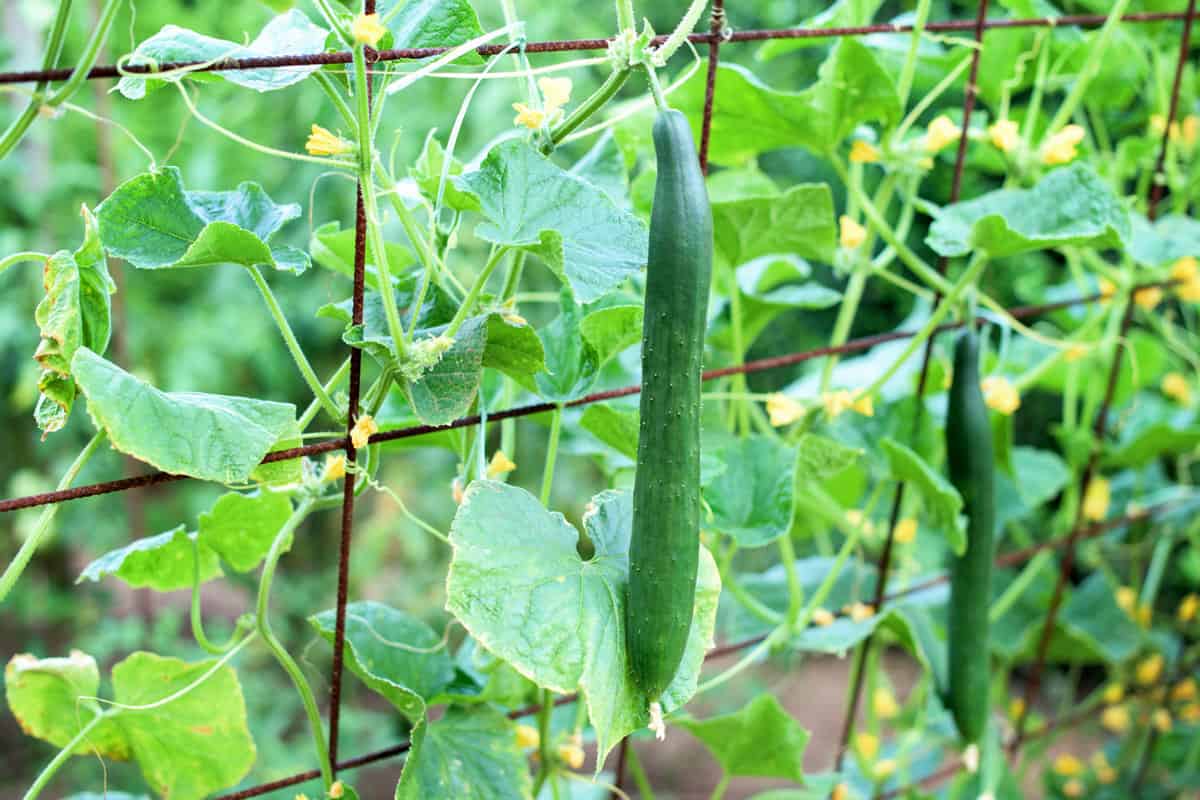 Trellises are laid out and installed on the garden bed before planting the seeds or transferring the seedlings so that the roots will not be damaged. It is better to weave and train the tendrils on the support as soon as they have developed.

Vining varieties require a trellis to grow and produce fruit. Make sure to provide the vegetation with its required growing condition. We hope the article helped you understand these two cultivars.

Can Cucumbers Be Grown In Pots?

What Is Eating My Baby Cucumbers [And How To Prevent It]?