Soil temperature is an important factor to consider in gardening and agriculture because it directly affects seed germination and consequent crop and plant yield. We have researched everything you need to know regarding the basic physical properties of soil, with temperature as the focal point.

You can only gauge or estimate soil temperature based on environmental factors without using a proper measuring instrument. A thermometer is necessary to acquire the exact temperature.

Since you can probably assess soil temperature based on environmental conditions like the time of day, prevailing weather, and humidity levels, using a thermometer is still the best way to determine the actual temperature of the ground. If you wish to find out more, continue reading! 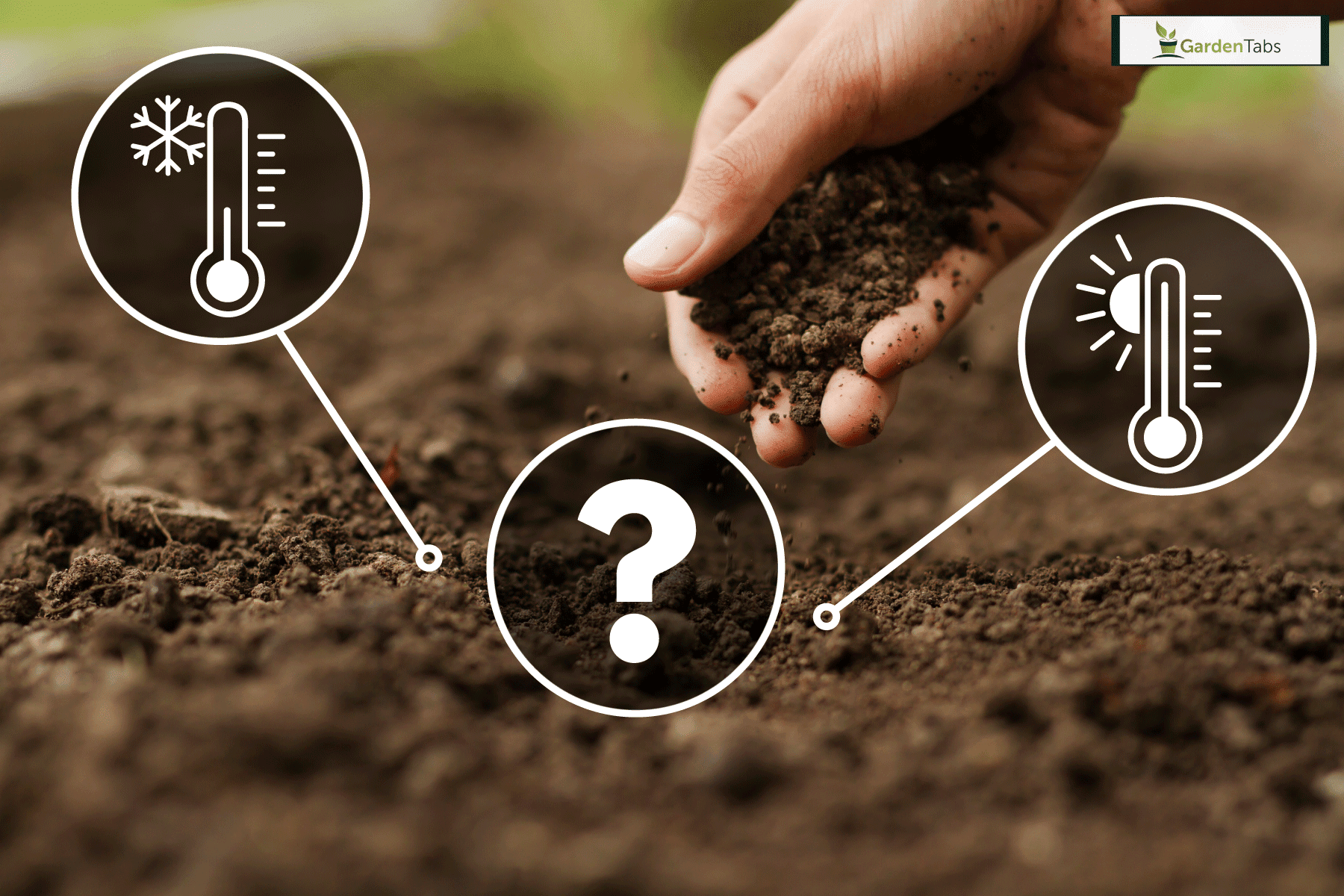 Soil, also referred to as earth or dirt, is a combination of organic and inorganic matter, elements, minerals, liquids, gases, and organisms regarded as an ecosystem in itself. Soil is a three-state system consisting of a solid phase or matrix of minerals and organic matter, a liquid phase or solution composed of water, and a porous phase or atmosphere that hold gases.

Soil may be regarded as living matter since it continually changes by way of physical, chemical, and biological processes. Soil evolution is influenced by the general climate, environmental factors, and biological activity but is impacted most by human presence and development.

In gardening and agriculture, it functions as a medium for plant growth, water storage, and a habitat for organisms. The interaction and processes underwent by the vegetation, organisms, and other components modify the soil and its properties.

Soil temperature determines biologic activity, nutrient production and uptake, infiltration, and other processes that depend on their overall nature and suitability. 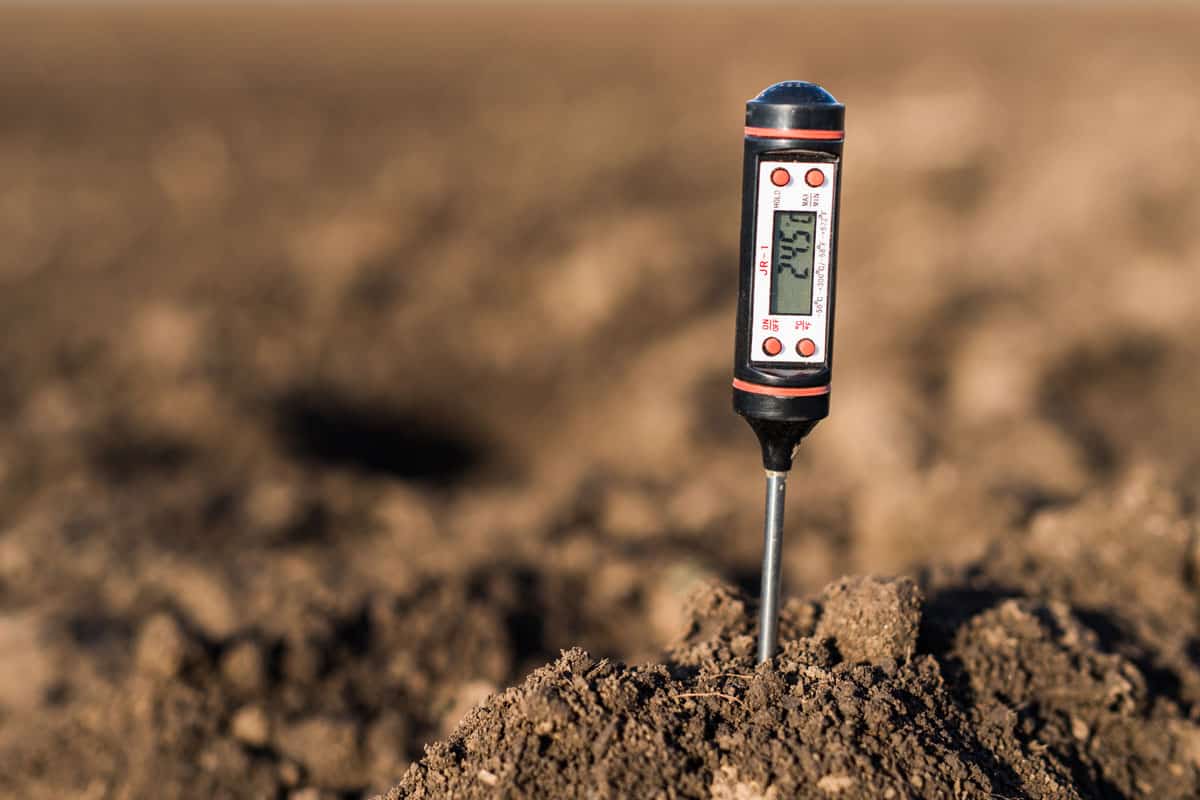 Germination is the initial stage of the growth of a plant after it emerges from the seed and develops above the soil. The process depends on external factors like water, air, light, and the right temperature.

Mature seeds need to be moist to swell and break the seedcoat, allowing the young plant to spring. Seeds sustain the embryo by providing nourishment through stored food reserves which become depleted when the seedling emerges.

At this point, photosynthesis takes over and provides the food and energy needed for continued growth. During this stage, the seedling requires a steady water supply, light, and nutrients.

Oxygen is a metabolic requirement for plant respiration; this is the energy source of the seedling prior to the development of leaves. Most seeds fail to germinate when buried too deeply under the soil because they are deprived of adequate oxygen levels.

Light is needed to produce sugar and oxygen from carbon dioxide and water through the process of photosynthesis. Young plants, however, are sensitive to direct sunlight and need to be placed in partial shade during development.

Temperature affects the rate of seed metabolism and most have a temperature range within which they germinate. The optimal temperature is between 70 to 80 degrees Fahrenheit or 21 to 26 degrees Celsius.

Soil temperature has a significant effect on plant growth due to its influence on the nutrient composition of the soil. Together with other factors such as moisture and aeration, increased soil temperature enhances nutrient availability.

This is due to the fact it accelerates the breakdown of organic matter by increasing microorganism activity. The process of decomposition results in deposits of minerals into the soil, which benefits plant growth.

The different byproducts released include water, carbon dioxide, and plant nutrients such as nitrogen, phosphorus, and sulfur.

Soil, as well as atmospheric temperature, also affects photosynthesis, as demonstrated by more vigorous growth during the summer and in warmer climates.

Infiltration refers to the capacity of the soil to allow water to penetrate and be retained within its matrix. Since water is an essential element for plants and organisms, the general properties of the soil, such as the type, density, and texture, determine the amount of infiltration and moisture content available for uptake.

Elevated soil temperatures tend to evaporate water more rapidly and lead to temporary drought between hydration, whereas low-temperature levels create the possibility of saturation. This is the principle behind watering vegetation more often in the summer and less during winter.

What Are The Factors That Determine Soil Temperature 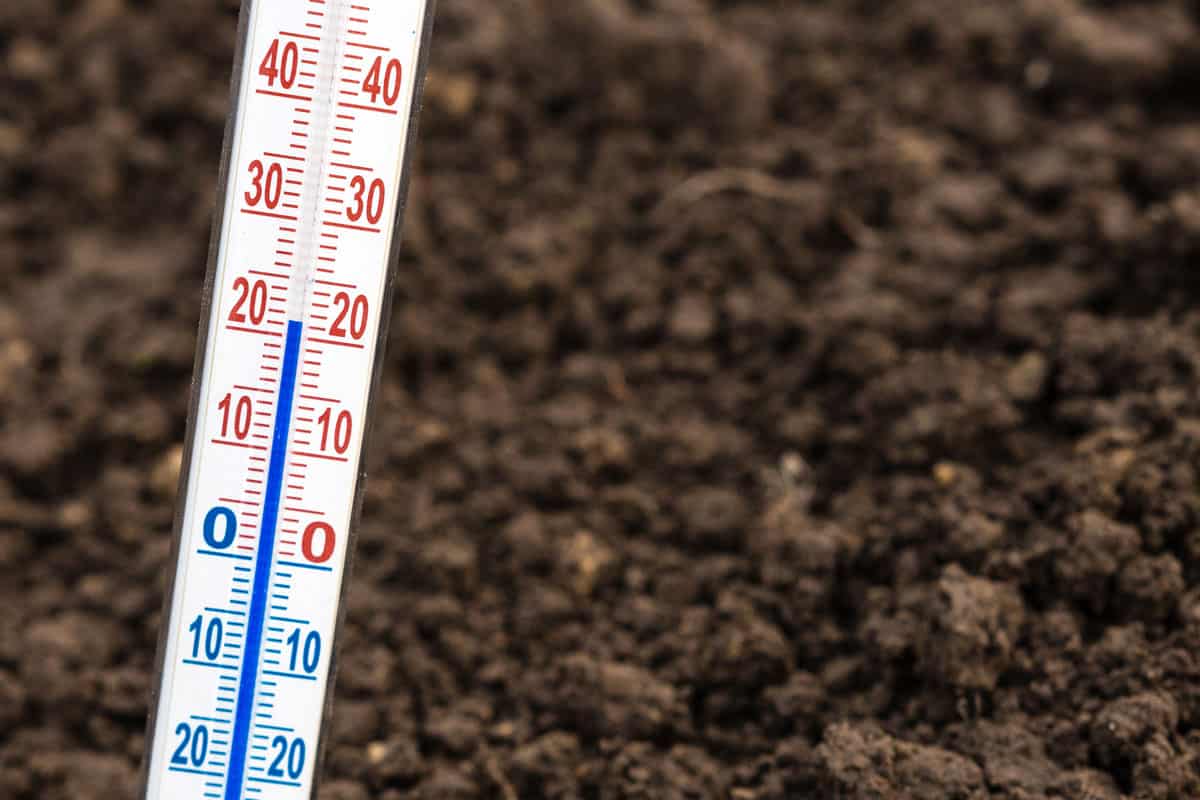 Radiation is the primary factor influencing soil temperature and is defined simply as the amount of heat from the sun penetrating the ground. Thus, on an average day, the soil temperature is at its highest and tends to cool down from late afternoon to morning.

This is an important consideration with regards to plants since it influences water uptake and evaporation, rate of metabolism, and nutrient production. Elevated temperatures increase or accelerate the said processes, while colder environments tend to slow them down.

Water absorbs heat from the soil and dissipates it into the atmosphere by way of evaporation. Thus, the soil is cooled, and its temperature decreases with less saturation. It would be logical to equate that watering tends to cool the ground and lower the temperature. On the contrary, it acts as a medium for heat to escape.

In practical terms, you must consider radiation, water content, and the pervading climate to optimize plant growth since they influence soil temperature.

Bare soil is readily affected by radiation and air temperature, causing fluctuations on an average day. Temperature changes can impact plant development, especially in areas where the differential is relatively extreme.

Prolonged hot or cold conditions during the summer and winter seasons demonstrate changes in plant health and vigor. A layer of mulch or a vegetative cover like grass or shrubs acts as an insulator that reduces evaporation and retains moisture while preventing excessive heat from penetrating the soil.

As mentioned, moisture is the primary facilitator for heat to escape and since organic matter and the byproducts of its decomposition require and maintain water, plants thrive when the ideal balance is maintained between proper hydration and organic content.

When solar radiation reaches the soil surface directly at right angles, heat penetration is deeper when compared to sloped terrain where it is scattered over a wide area. 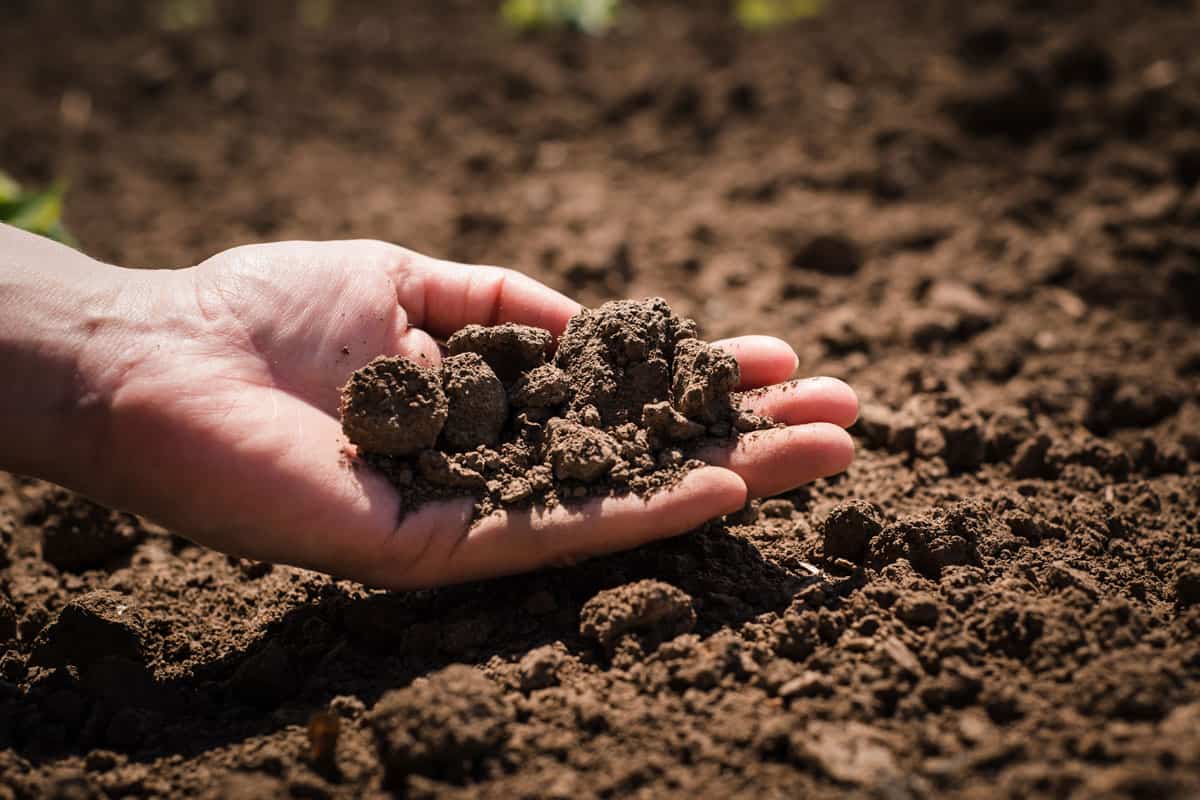 The combination of organic matter, minerals, water, and gases dictates the properties of soil and determines its suitability to support plant growth.

Sand, silt, and clay are the basic components that make up soil, and the texture depends on the relative proportion of the particles present. Soil rich in sand, which is relatively the biggest component, allows water to drain quickly and tend to lose moisture faster.

It provides suitable aeration for roots to develop but is easily affected by temperature change. As a result, sandy soil tends to fluctuate depending on the time of day, which can impede the development of seedlings.

Silt is a fine component that features smaller spaces between particles. Silty soil has a higher capacity to hold water and retain moisture.

Clay develops a mud-like quality when combined with water and tends to drain poorly. Soil rich in clay does not generally favor most plants' growth since they then get waterlogged when wet and turn hard when they dry out.

Soil with ideal proportions of sand, silt, and clay, collectively referred to as loam, creates a mix that promotes plant growth and development.

Soil structure refers to the way sand, silt, and clay particles are bound together, termed aggregation. It determines the movement and regulation of air and water and affects nutrient availability and uptake. Good soil structure has fine, loose aggregates that break up easily when squeezed. It promotes root development and faster plant growth.

Soil porosity refers to the spaces between aggregates and determines the density and compactness of the material. Healthy soils contain many pores which allow adequate movement of air and water. Roots develop freely in porous mixtures and favor the growth of young plants or seedlings.

The amount of organic matter and minerals present in the soil influences the hue that it takes on. Orange, yellow, and light brown soils contain high amounts of iron, while dark brown or black have rich organic content.

The latter is an excellent medium for plant growth since it has high concentrations of nutrients. Evenly colored soils mean good structure and adequate porosity. They allow root ventilation, hold enough moisture, and are not easily affected by temperature changes. 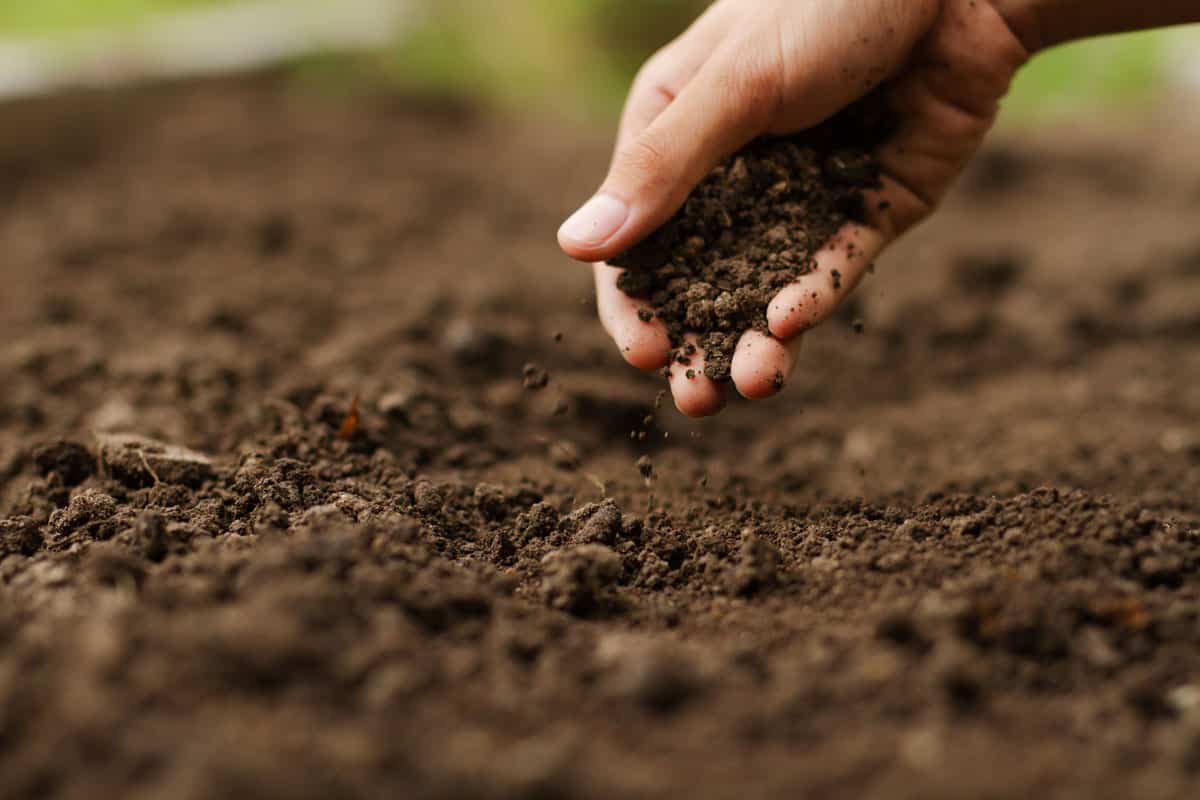 Temperature and other soil properties directly affect plant growth and influence its health and development. We hope you found the article informative and helpful. From one enthusiast to another, enjoy your plants!

Compost Or Topsoil For Overseeding? [Which Is Best?]

Can I Put Topsoil Over Existing Grass And Reseed?