One thing all vegetable gardeners need to know is what crops should be rotated and when. If you are wondering whether or not you can plant brassicas after potatoes or tomatoes, you have come to the right place. We have done all the research necessary to provide the best possible answer for you.

You can plant brassicas after either potatoes or tomatoes. The reason for doing that is to end up with more organic matter in the soil, which creates healthier soil in the long run.

The land must be tilled and cleaned before the next crop gets planted.

There is much more important information ahead about the benefits of planting brassicas, what you should and shouldn't plant after potatoes and tomatoes, and how to restore soil after harvesting potatoes. If you are interested in learning about these things, keep reading this post. 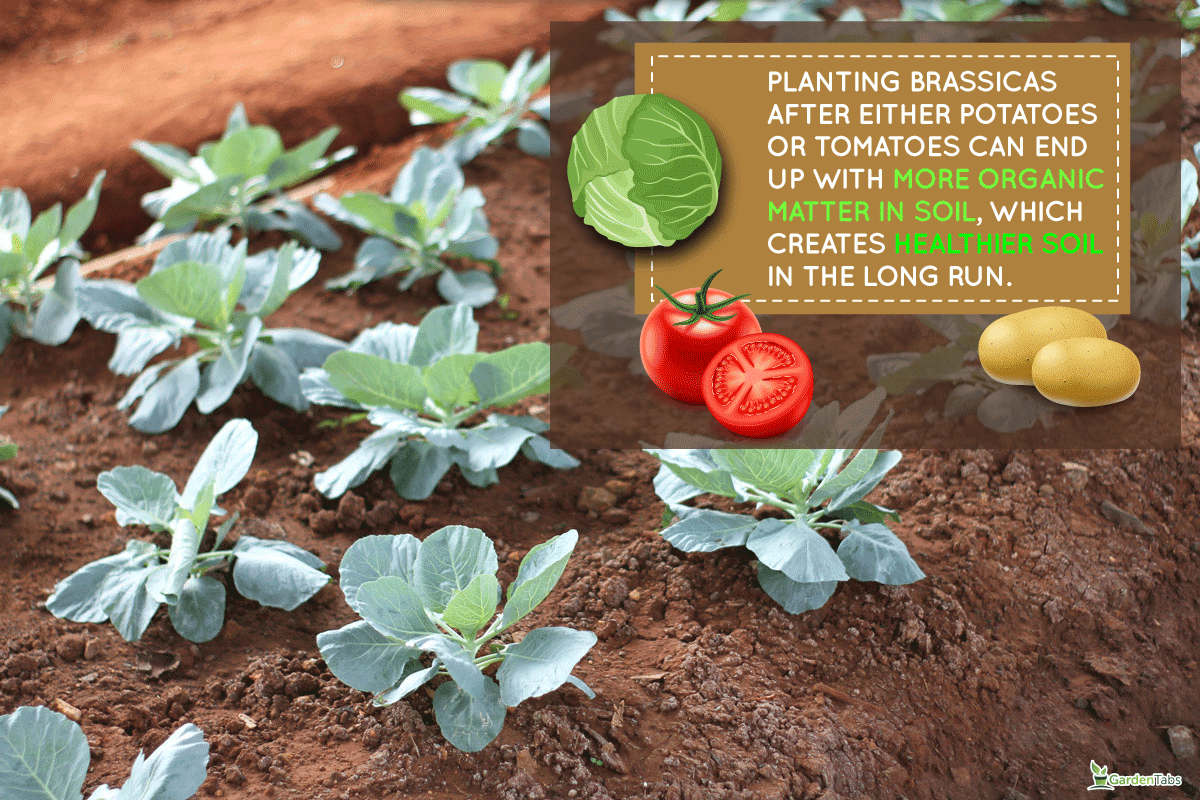 Can you plant brassicas after tomatoes?

Brassicas can be planted after tomatoes without a problem as long as the soil is healthy. Some examples of brassicas are Brussels sprouts, cabbage, kale, broccoli, turnips, collard greens, and cauliflower.

The most important thing to understand about planting brassicas after tomatoes is that they will root deeply into the soil.

What crops to plant after tomatoes?

The best thing to plant after tomatoes is legumes. Some legumes are meant for humans to eat, while others are grown for livestock consumption. Examples of legumes are beans, alfalfa, peas, clover, or peanuts. Any of these are a good option for planting after tomatoes.

Legumes are beneficial for the soil. They contain bacteria that replenish the soil with nitrogen. This is important because it is something the soil needs following a tomato crop, as tomatoes are heavy feeders.

Cruciferous crops are second in line for what to plant after tomatoes. This includes brassicas. Examples of cruciferous vegetables are broccoli, brussels sprouts, cauliflower, bok choy, collard greens, and arugula. 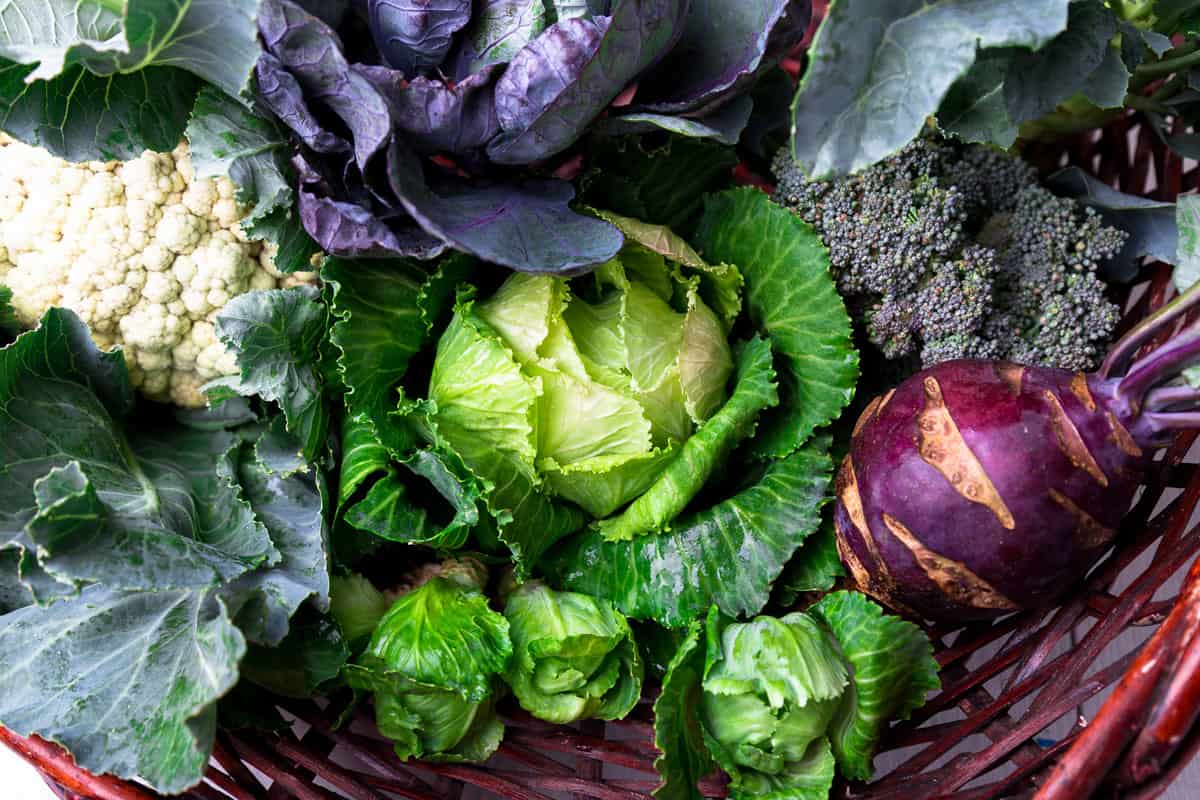 If you utilize succession planting when working with planting beans, you can have a crop coming in continuously. To do this, you plant the first row or set of rows at the beginning of the season and then offset when you plant the following rows.

You should wait somewhere between two and four weeks to plant the second set of beans; you will see that instead of having all of your beans to harvest at one time, the crops will be coming in one following the next.

Since many vegetables produce the most during their first crop, it helps to space the harvesting apart, especially if you maintain your garden by yourself. It isn't a necessary step for everyone, but it works better for some people.

What can you not plant after tomatoes?

You should not necessarily plant anything directly after tomatoes. You have the option to move your crop and let the soil recover. Legumes contain nitrogen-fixing bacteria in their root systems, which helps make the soil healthy again.

When it is time to plant something in an area where tomatoes grew previously, anything in the nightshade family should be avoided. Do not plant corn and tomato plants in the same area of your garden.

Corn and tomato plants attract many of the same pests, unfortunately. They will also work against each other to soak up the nutrients in the soil, so it is best to keep them planted on opposite sides of your garden.

Move your tomato plants around when replanting them every four or five years. They build up diseases and pests in the soil, so you are more likely to keep them healthy if you change the area they are planted every few years. Ensure your plants are spaced appropriately so air can flow around them.

Can I plant brassicas after potatoes?

Yes, you absolutely can plant brassicas after potatoes. It is an excellent idea to do so. Kale and cauliflower provide nitrogen for the soil. Brassicas, more specifically cabbage, does well in nutrient-rich soil.

Click here to see this knife set on Amazon.

Very rich soil is not suitable for deeply rooted plants such as brassicas. Brassicas and potatoes should not be planted near each other. This is because the two vegetables thrive in soils of different pH levels.

Rotating crops helps reduce the risk of disease in your soil. To help be sure you end up with the best possible harvest, it is a good idea to have a rotation schedule for your crops throughout the years.

What can you grow in the soil after potatoes?

This is a great question! Understanding what crops are best to plant after growing potatoes is essential. Brassicas are nutrient scavenger crops.

Brassicas can have roots that are as deep as six feet and some even deeper. This is quite the opposite of potatoes which have shallow roots. You should move your crops around to avoid pests and diseases in the soil that may reoccur if you do not switch areas for the growing season.

The only thing off the table for planting after potatoes are nightshades. Some examples of nightshades are eggplants, tomatoes, and peppers. They are different from other vegetables in that they contain alkaloids.

Tomatoes contain fewer alkaloids when they are given time to mature. Most alkaloids in a tomato plant are in the vine and steam anyway, so you don't have to worry too much about consuming them when eating the fruit.

Brassicas and other crops that add organic matter back into the soil are ideal for planting after you have grown potatoes.

What steps to take after harvesting potatoes might be on your mind? Let's talk about it.

What do I do after I dig up my potatoes? 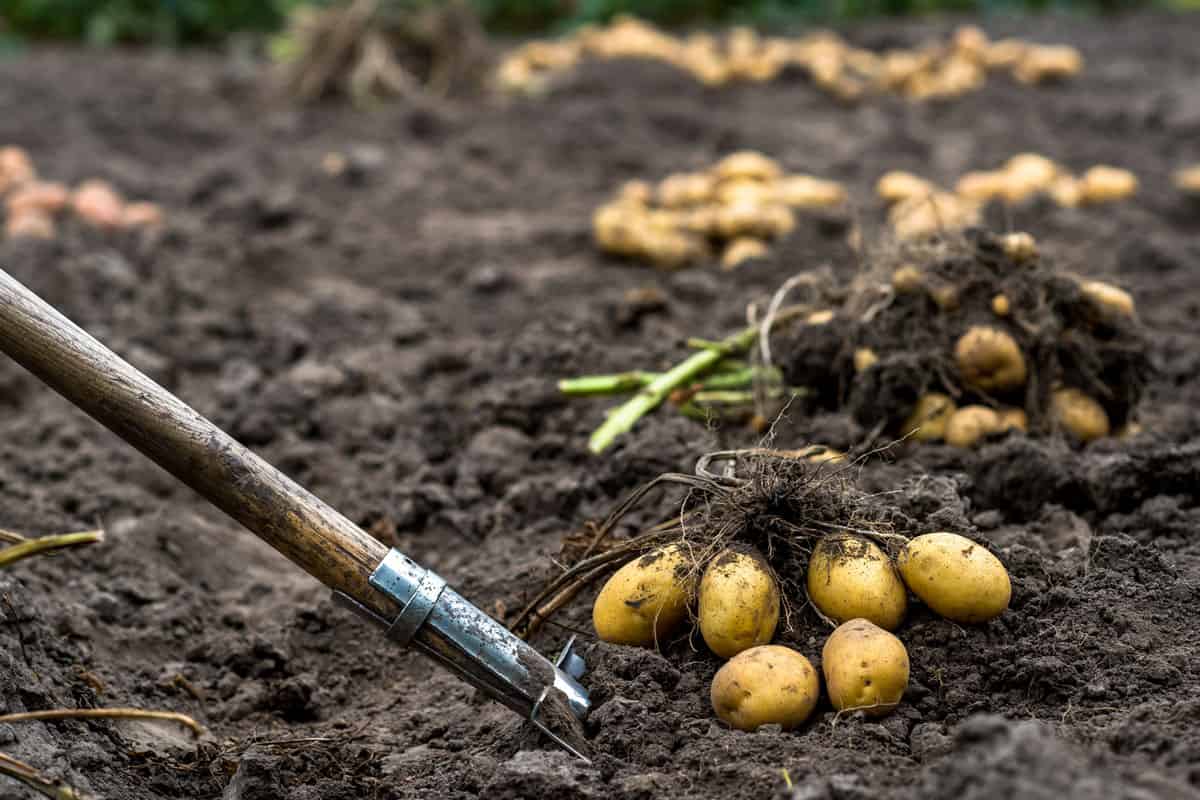 As soon after digging up your potatoes as possible, you need to till the ground. Doing so is crucial for the overall quality of the soil. Preparing your soil before winter hits makes it more likely that your next crop will do well during the next growing season.

Because potatoes grow under the ground, weed roots and waste are left behind after you remove the potatoes. You must get those taken out to avoid any rotting in the soil. If any fungal diseases spread onto your potatoes or are seemingly present, the soil must be treated before any other crop can be planted there.

After you have cleared the soil of roots and waste, you can sow grass seedlings. We will talk about that coming up soon.

Something important to remember is that potatoes are a root crop that consumes more soil than any other. You have to take care of your soil after harvesting potatoes so that you can have healthy soil ready for a new crop the following year.

How do you restore soil after potatoes? 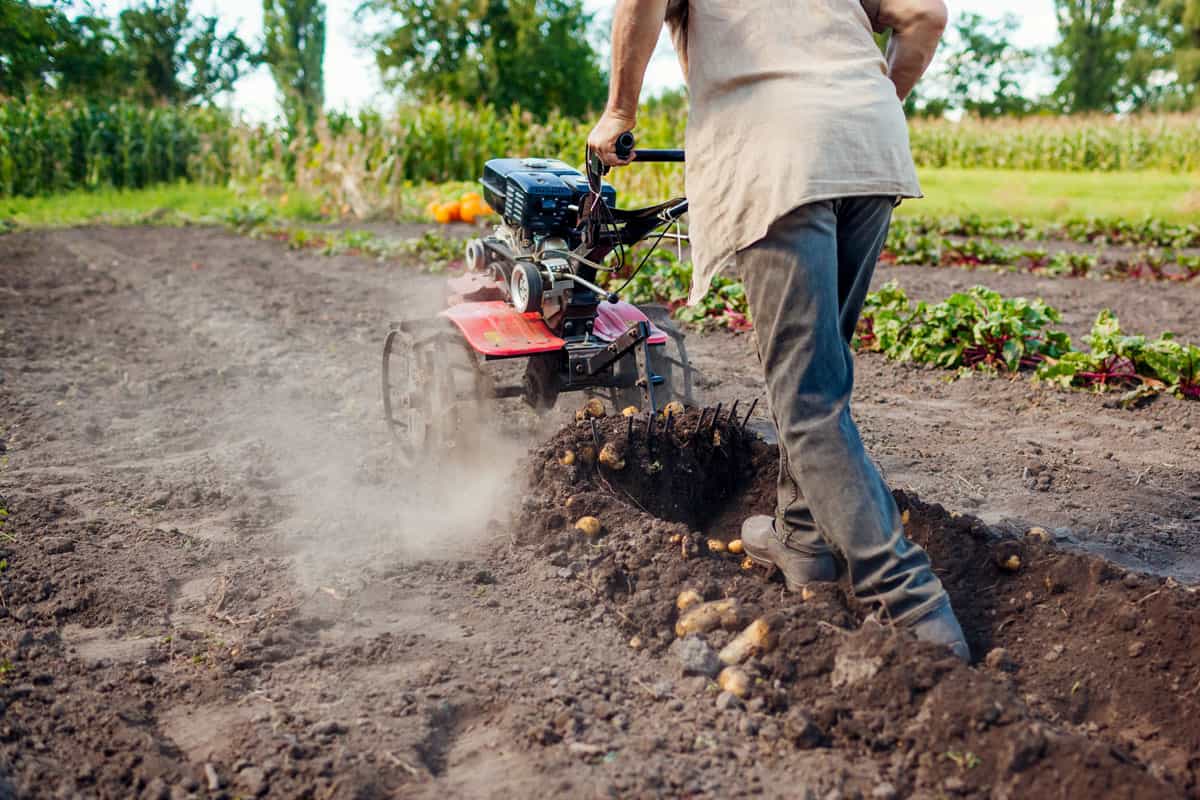 The most common way to restore soil after potatoes is by sowing green manure. This is done after the removal of any waste or roots or potatoes that were left behind after the harvest took place.

Green manure is described as fast-growing plants sown into bare soil, usually in a vegetable garden. A couple of examples are cover crops such as alfalfa and clover.

One of the purposes of green manure is that its shallow roots prevent soil erosion. Another benefit is that green manure stops weeds from thriving.

The soil becomes richer when a plow or disk is used to dig into the fresh green and incorporate it into the soil. This is as long as the material can completely decompose.

For example, the soil will be restored faster when you plant alfalfa, clover, peas, or lupine. This is because of the nitrogen and phosphorus that they provide. Sewing too little seed will not give the soil the necessary nutrients.

Fenugreek and buckwheat are two examples of foliage that will keep weeds at bay between growing seasons. The soil left behind after growing potatoes needs to be tilled and cared for if you want successful crops in the future. 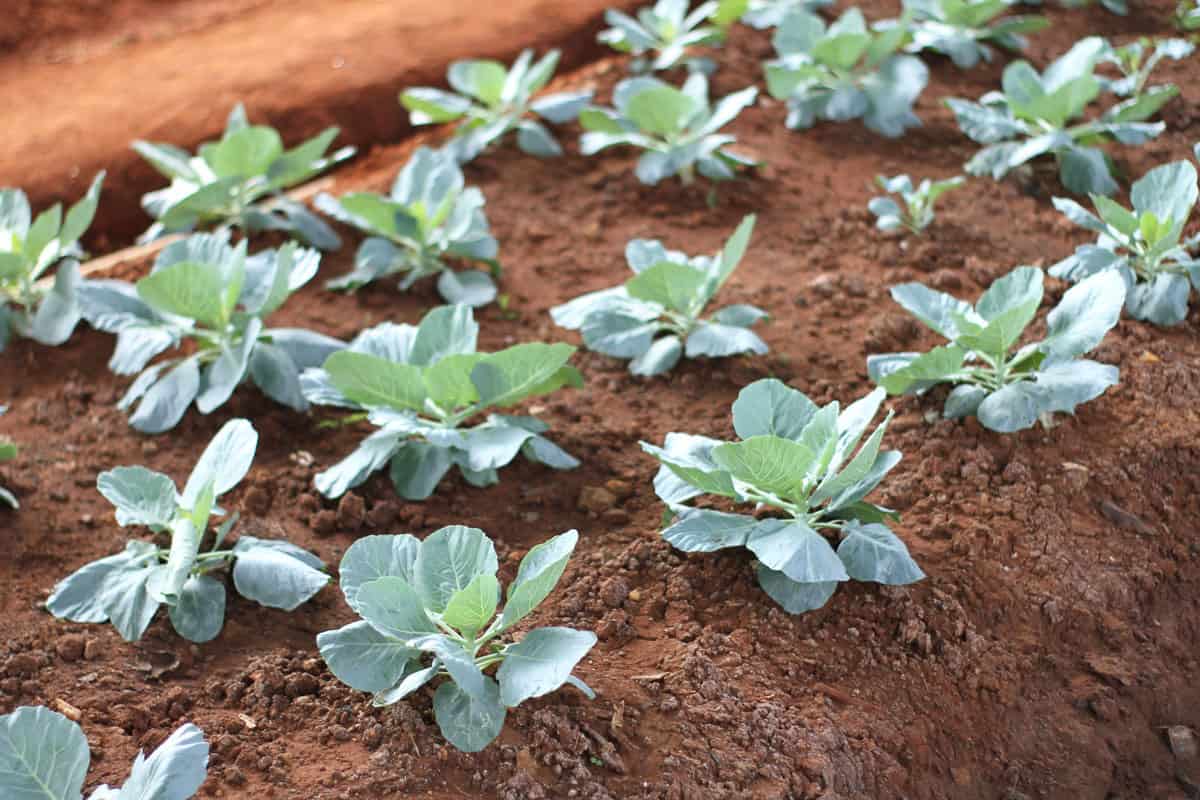 With everything you just read fresh on your mind, the overall consensus is that you can plant brassicas after either potatoes or tomatoes. They work well, having been planted after potatoes because of their vastly different root systems.

Cruciferous vegetables and legumes are best after tomatoes, while brassicas work well after harvesting your potatoes.

Before you go, check out the following links that may interest you:

How To Replenish Soil After Tomatoes [Inc. Amending Soil Or What To Plant]

Can You Grow Peas From Frozen Peas?

How Do You Prepare Soil For A Vegetable Garden In Florida?