Mulching is a great way to improve your soil and gardening. Mulching adds to the health of your soil as it degrades and also helps retain water because it prevents evaporation. You just have to do it the right way, experts have advised on how to mix mulch with soil, here's what they had to say;

Mulch can be added to soil to help improve organic matter levels. The aerobic decay of mulch by bacteria and microorganisms will add beneficial nutrients to the soil for the plants while also creating a healthy soil structure and strengthening drainage and aeration for the plant's roots.

If you'd like to know the right way to mix mulch with soil, keep reading, as we will discuss further on this in this article. 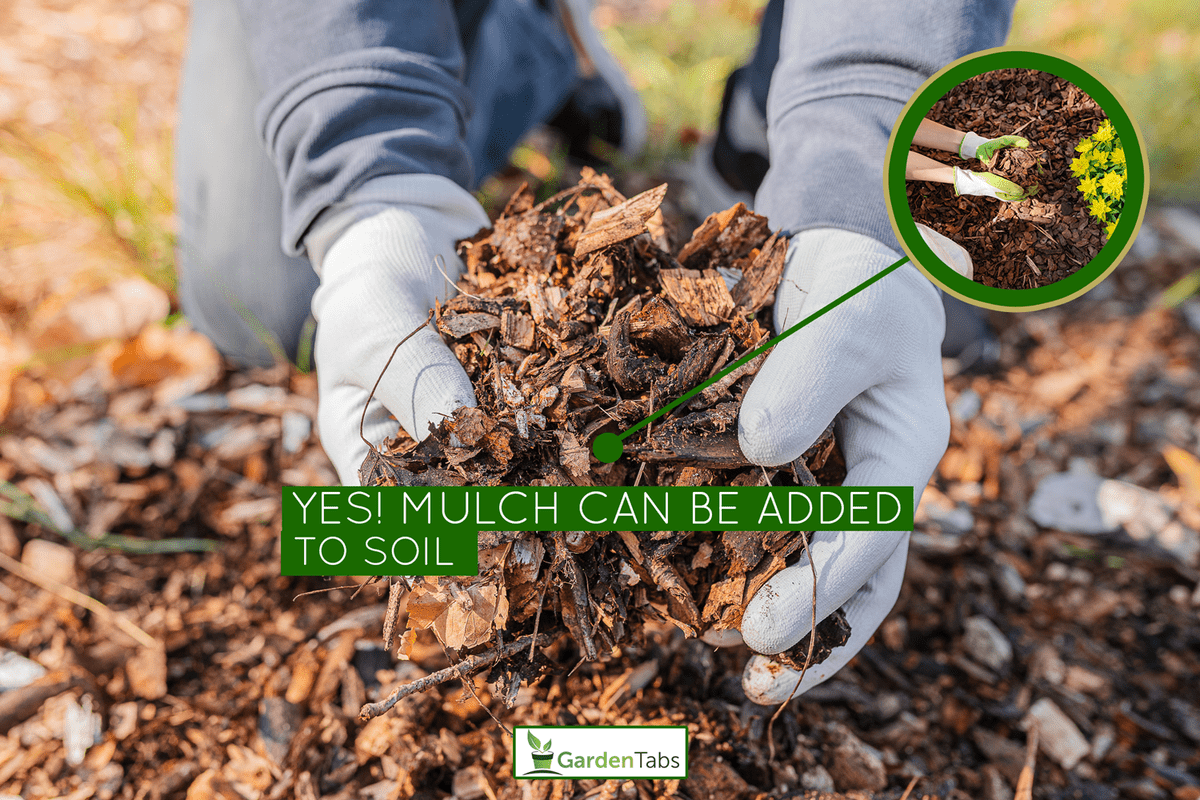 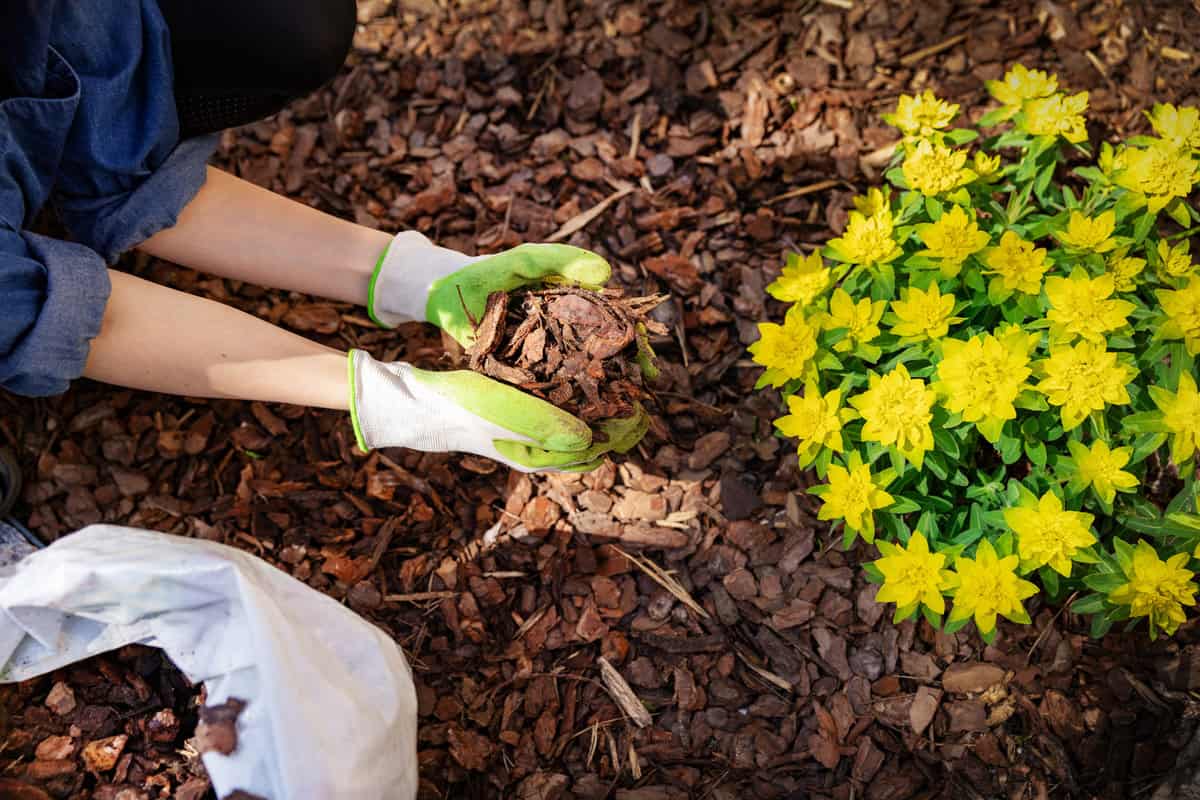 Mulch is a covering that is applied to the soil's surface. It is used for a variety of reasons, including soil moisture conservation, soil fertility, as well as health improvement, weed control, and aesthetic appeal.

Mulch can be permanent, like the use of a plastic covering, or bio-degradable, like bark chips. Bark (which is also known as bark dust, bark chips, or bark mulch) is a type of mulch made from chipped or shredded tree bark.

It's been used in agriculture, gardening, and landscaping. Bark nuggets are coarser varieties of bark dust. Mulch is usually not fully organic and can be applied to bare soil or existing plants.

Manure or compost mulches will be naturally incorporated into the soil by worms and other organisms. The practice is used in both commercial crop production and gardening, and when done correctly, it can improve soil productivity. Soil productivity would refer to the ability of the soil to sustain good agricultural plant growth.

Can You Mix Mulch With Soil? 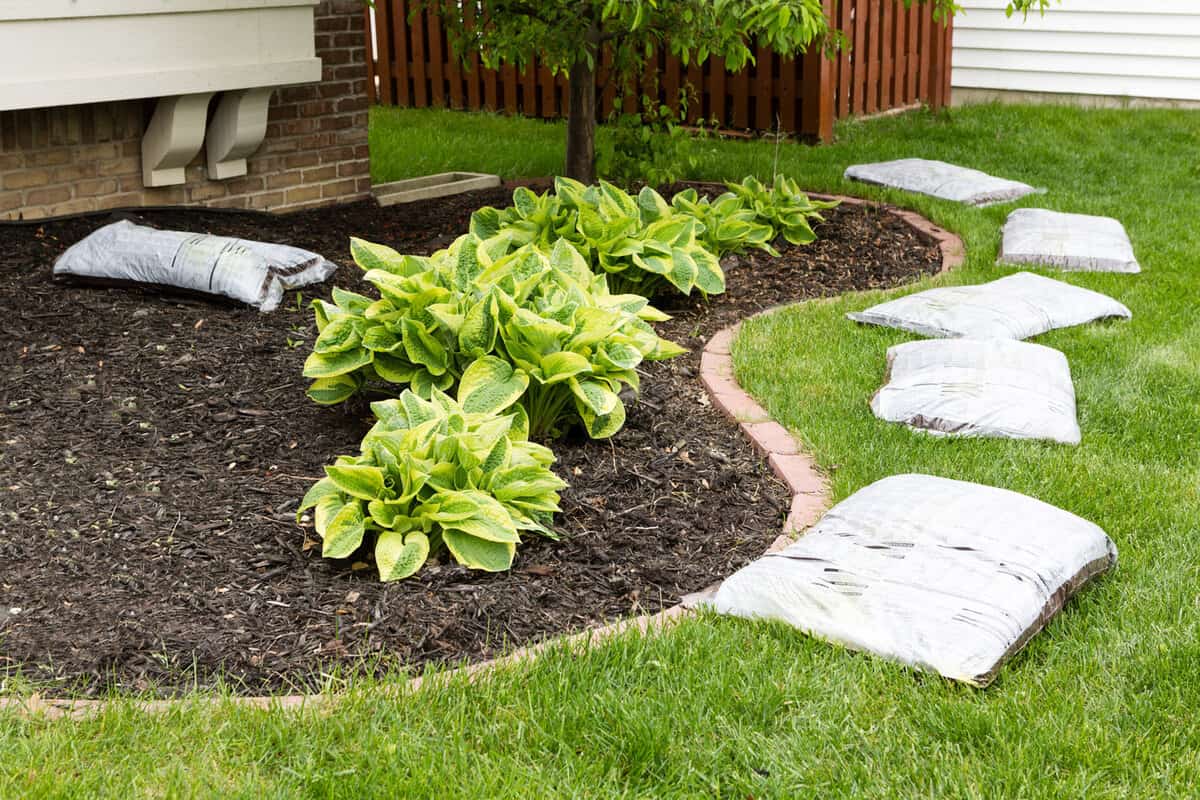 Mulch is used in the garden to preserve moisture in the soil, inhibit weeds, keep the soil cool, avoid frost heaving in the winter, and improve the appearance of the garden bed.

Mulch is applied to the ground to keep it moist and cool, control weeds, and provide nutrients to plants. Mulching has numerous benefits, but what happens when it becomes too old or rotted? It is now ready to be mixed into the soil.

To help increase the organic matter in the soil, old mulch can be mixed in with it. The aerobic decay of mulch by bacteria and microorganisms will add useful nutrients to the soil for the plants while also constructing a healthy soil structure and enhancing soil aeration for the plant's roots.

Mixing mulch with soil helps to lower soil temperature and allowed moisture to permeate the soil more evenly. This provides the ideal environment for the beneficial fungi that your soil requires.

What Should I Put Down Before Mulching?

The use of organic mulch in your yard or garden beds can help you save water, protect plant roots, improve soil health, keep soil temperature stable, and prevent weed growth.

Inorganic or decorative mulch can also be used. It is less effective at weed prevention and protecting plant roots. However, its advantages include the addition of color and texture to your garden bed or property.

It is necessary to make the decision on which mulch you want to use on your property, and then apply it. Here are some guidelines to aid you in applying mulch:

Can You Mix Compost and Mulch? 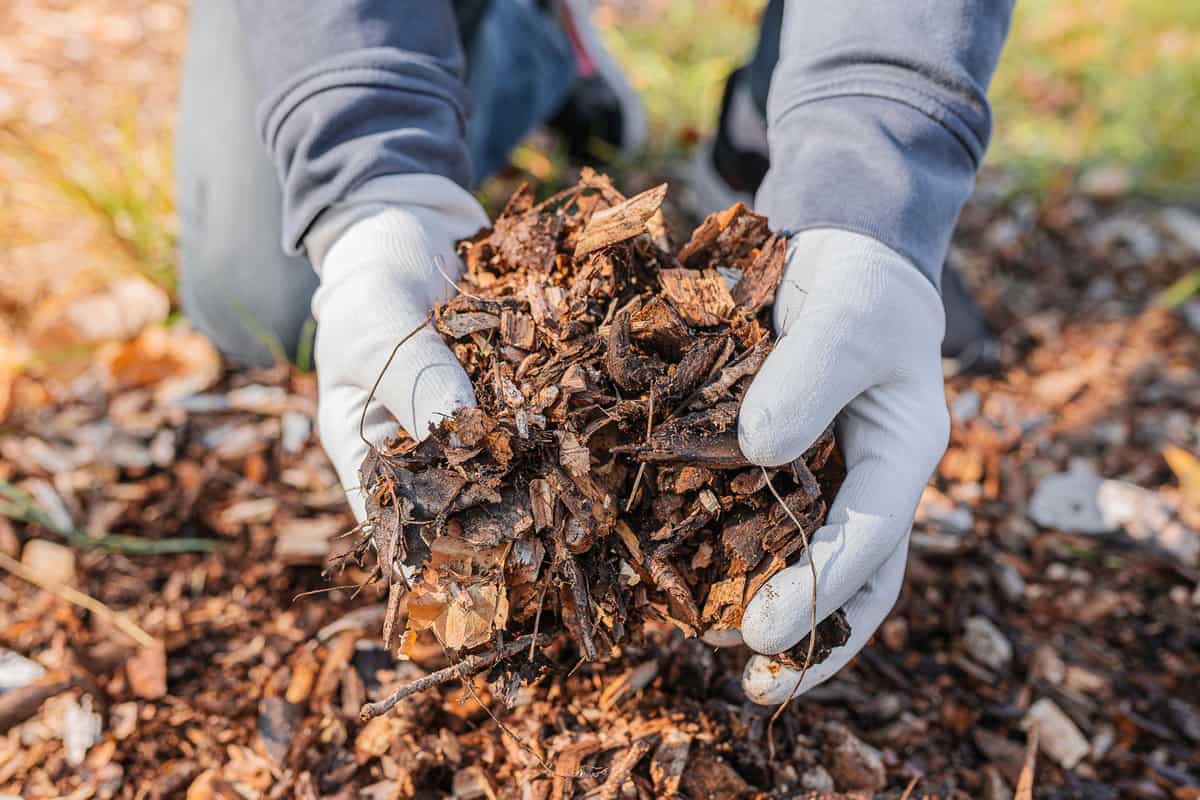 Compost can be used at any time of year, but it is most common in the spring and is frequently repeated after garden cleanup in the fall.

Shredded leaves are a cost-effective and easy way to supplement your garden's organic matter. They break down quickly and enrich the soil with nutrients.

Run your lawn mower over the leaves to shred them, or use a leaf shredder. Non-shredded leaves take longer to decompose and can form matted, impenetrable clumps if too thick. Remember to always be careful when using this equipment.

The application of mulches can also be spread over compost or leaf litter, this will prevent the growth of weeds, add natural material, and help to reduce the level of moisture evaporation. The compost layer will add more nutrients and decompose faster than the mulch layer.

Mulch your garden to a depth of no more than 2-3 inches. Having a deeper layer than this may deny the soil oxygen while also stopping moisture from entering.

It is crucial that mulch should never be piled around the root of a plant; this promotes rot and can lead to infection. The application of Mulch should be in the spring, following heavy rain and giving time for the soil to warm up.

Can You Mix Bark With Potting Soil?

Mixing bark with potting soil provides the proper amount of water, air, and nutrients for healthy plants. Pine bark is frequently used in potting soil, but bark chips can also be used. When the mixture is wet, it prevents it from sinking.

Combine screened pine bark mulch with a commercial potting mix or seed-starting mix to loosen and improve aeration and drainage. Bark is both less expensive and coarser than perlite or chicken grit. It wicks and retains water better than crushed rock.

A trick to this is to order twice as much of the potting mix you need. The extra potting mix will continue to decompose, and when it comes time to order more potting mix next spring, you will only need a small amount of compost. Shredded aged pine bark is a good mix for your potting soil

The bark of a pine tree is used to make aged pine bark mulch. Commercial companies shred the bark and age it for a few seasons. This is the primary component of my potting mix. It is also the primary ingredient used by the majority of commercial growers.

Does Mulch go on Top of The Soil? 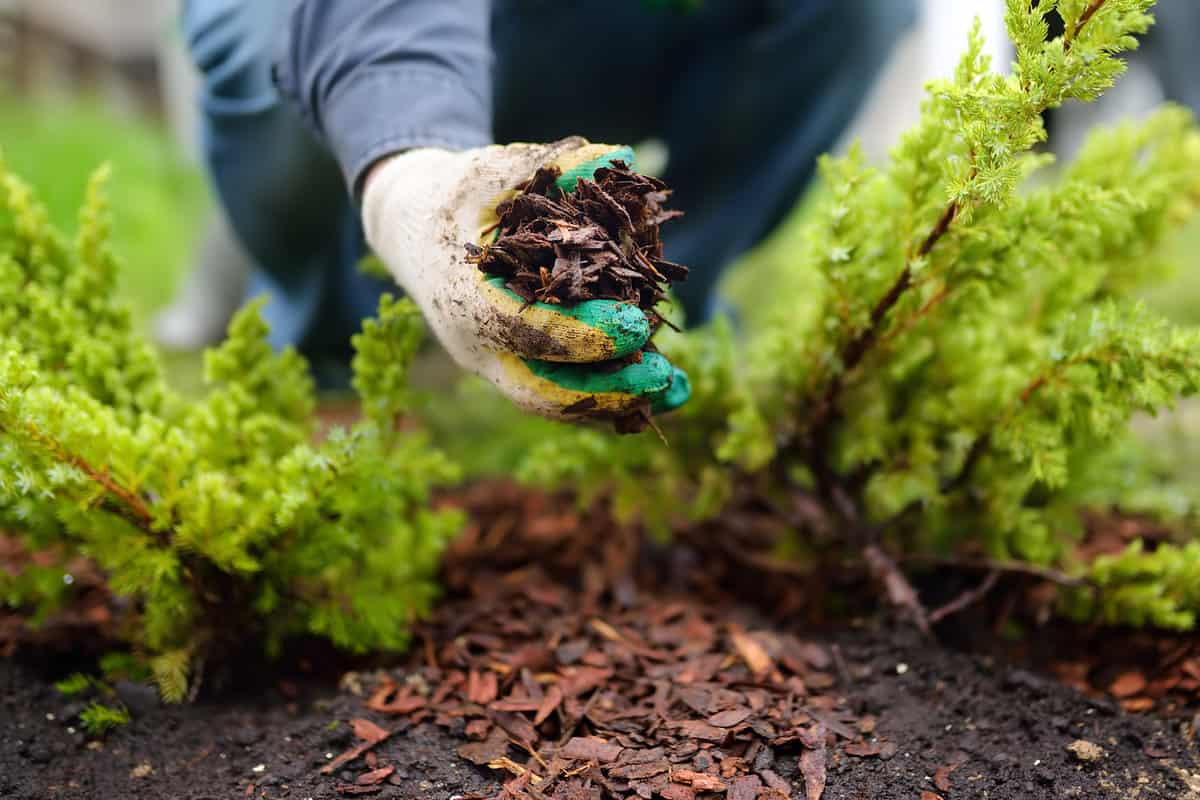 First, apply the mulch to weeded soil, and then apply a thick enough layer to prevent new weeds from growing through it. A four-inch layer of mulch will keep weeds at bay, though a two-inch layer is usually sufficient in shady areas.

Avoid turning the soil in the mulching area because it can encourage more weed or grass growth. First, rim the area you want to mulch to keep mulch from overflowing onto the grass. You can also construct a barrier out of stones or bricks.

Can I Plant Straight Into Mulch?

Planting can take place after the mulch has been applied to the garden bed by clearing back the mulch layer and then placing the plant. The mulch can then be reapplied to the area right away.

Planting directly into the mulch is not recommended in most cases, with the exception of cases where compost is used as the mulch. Composting as a mulch layer is a technique that has grown in popularity as a result of the no-dig gardening method.

Can I Mix Mulch With Clay Soil? 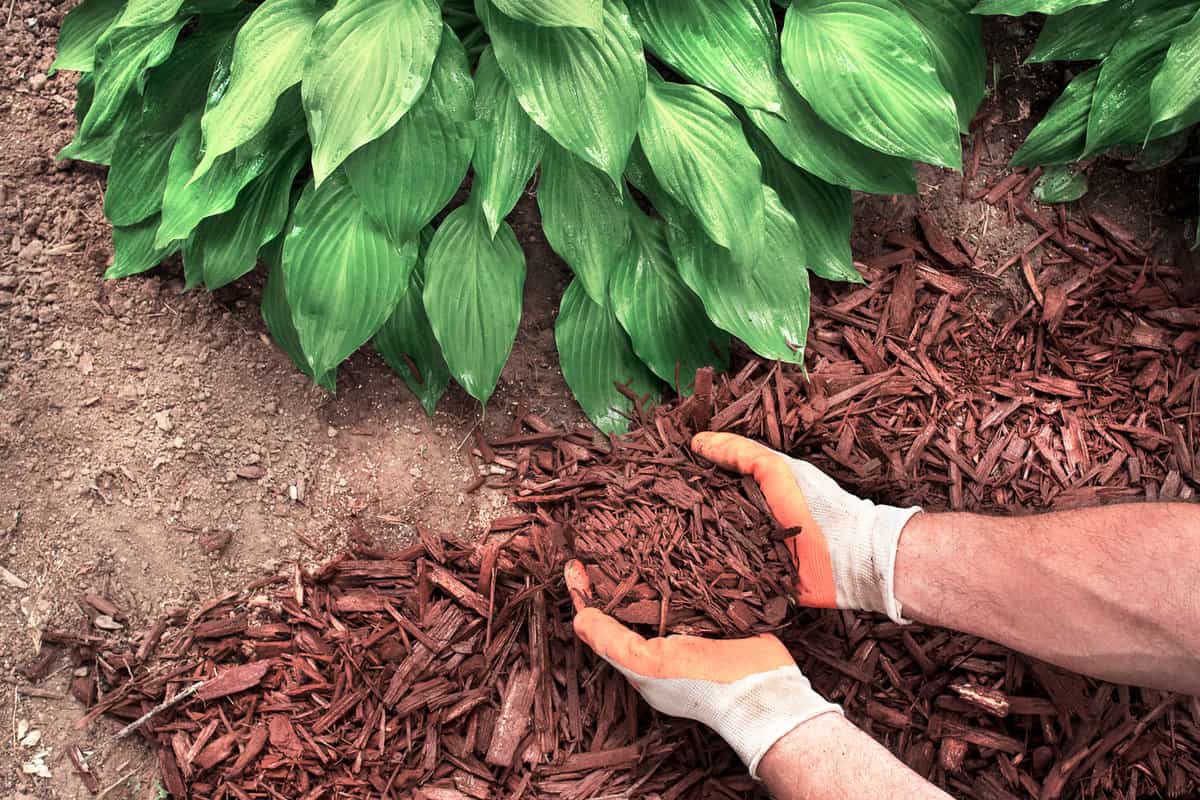 Garden soils come in varieties - Clay, silt, loam, and sand and each of these have its benefits and challenges. For Gardeners with clay soil, it will require a little more work, but once you know how to work around it, you'll learn to love and make good use of your soil.

There are a number of great mulch options for clay soil, this will include the use of wood chips, bark mulches, hulls, and shells.

Mulch will help in the reduction of evaporation from your soil, reducing the need to water your plants significantly. by breaking up clay and improving water and air movement in the soil, mulch feeds sandy soil and improves its ability to retain water.

If you would like to read more about best practices for your garden, here are articles we recommend:

How Much Does a Yard of Mulch Weigh?

Should You Mulch Around Maple Trees?