Zen gardens are spaces specifically created to promote things like peace of mind, calm, meditative peace, and serenity. They are gardens of many different shapes and sizes, ranging from something that could fit on your desk, to a full-sized landscaping endeavor. 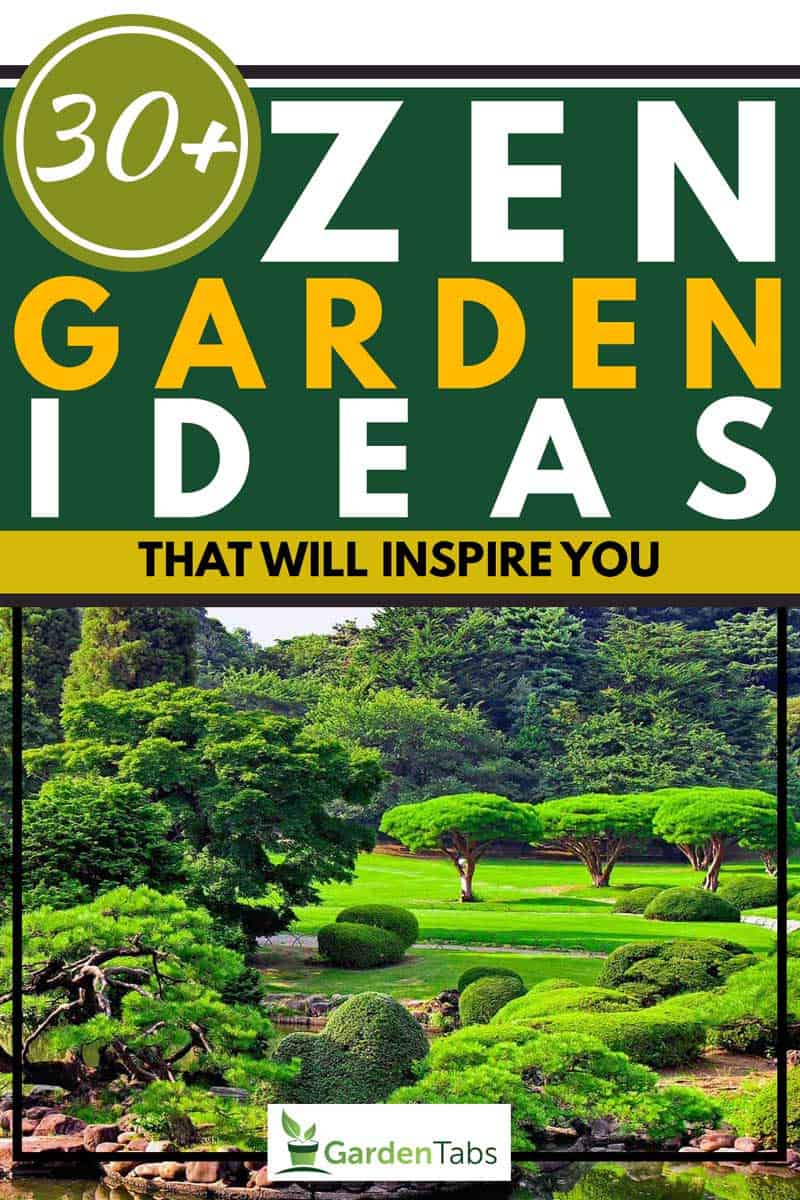 They also go by the name Japanese Rock Gardens. These gardens are not your average gardens. They aren't meant for growing fruits or vegetables, and they aren't meant to be treated like your average flowerbed either. When it all comes down to it, the word "garden" doesn't really seem to have anything to do with Zen Gardens.

The current form of the Japanese Rock Garden, or the Zen Garden, has been heavily influenced by Chinese and Japanese history, along with their different interpretations and evolving understandings of art. Fifth century Taoism influenced the symbolism of modern Japanese Rock Gardens. The early belief that immortals lived on solitary islands is peace has given symbolism to the isolated stones commonly found in Zen Gardens, which symbolizes peace, youth, and knowledge.

Buddism began to show its influence several centuries later, adding fluidity and an acceptance of change to the gardens. This incorporation of changing elements of the garden was meant to show appreciation for the cycle of life and death, shown in flowers and other plants that change with the seasons.

It wasn't until around the fifteenth century that what's currently known as the Zen Garden really solidified. Rock and sand became the focal points of the garden, with a zen monk named Muso Soseki creating what are now some of the oldest Japanese Rock Gardens.

Different sizes and arrangements of stones represent the different elements of nature, and different designs in the sand represent water and harmony. This symbolizes stripping life down to its bare bones, helping you to focus on the things that really matter.

What Do You Typically Put In A Zen Garden?

Classic Zen Gardens only incorporate natural materials, as anything artificial or man-made defeats one of its core purposes of stripping everything back to fundamentals. Here are some of the things included:

What Plants Are Good For A Zen Garden?

Plants are generally not included in modern Zen Gardens. However, as Zen Gardens are supposed to be a place that promotes peace and a meditative state, you can incorporate whatever you need to achieve that. Willow trees, quaking aspens, small shrubs, and groundcover plants would be good additions.

Now that we've covered the history and basics of Zen Gardens, check out these gorgeous photos for some inspiration! 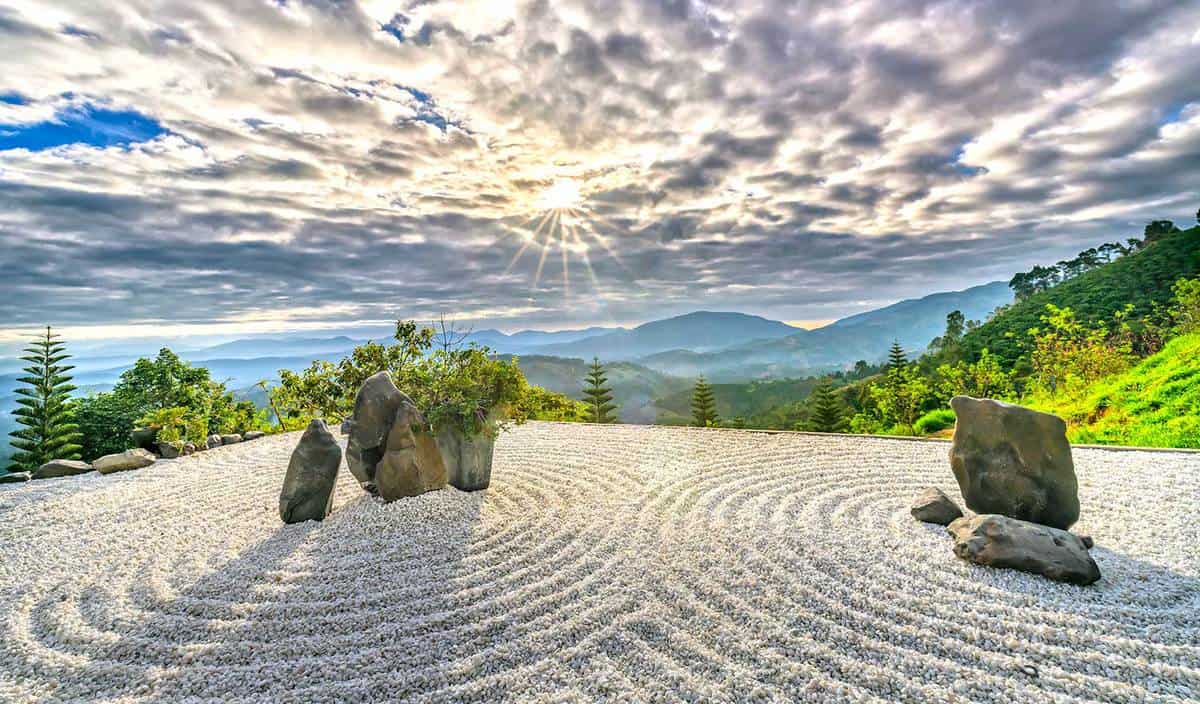 This rock garden draws heavily on the symbolism of water. The patterns in this rock garden are meant to be interpreted as ripples in water, which in turn makes the larger rocks symbolize islands or other large masses. 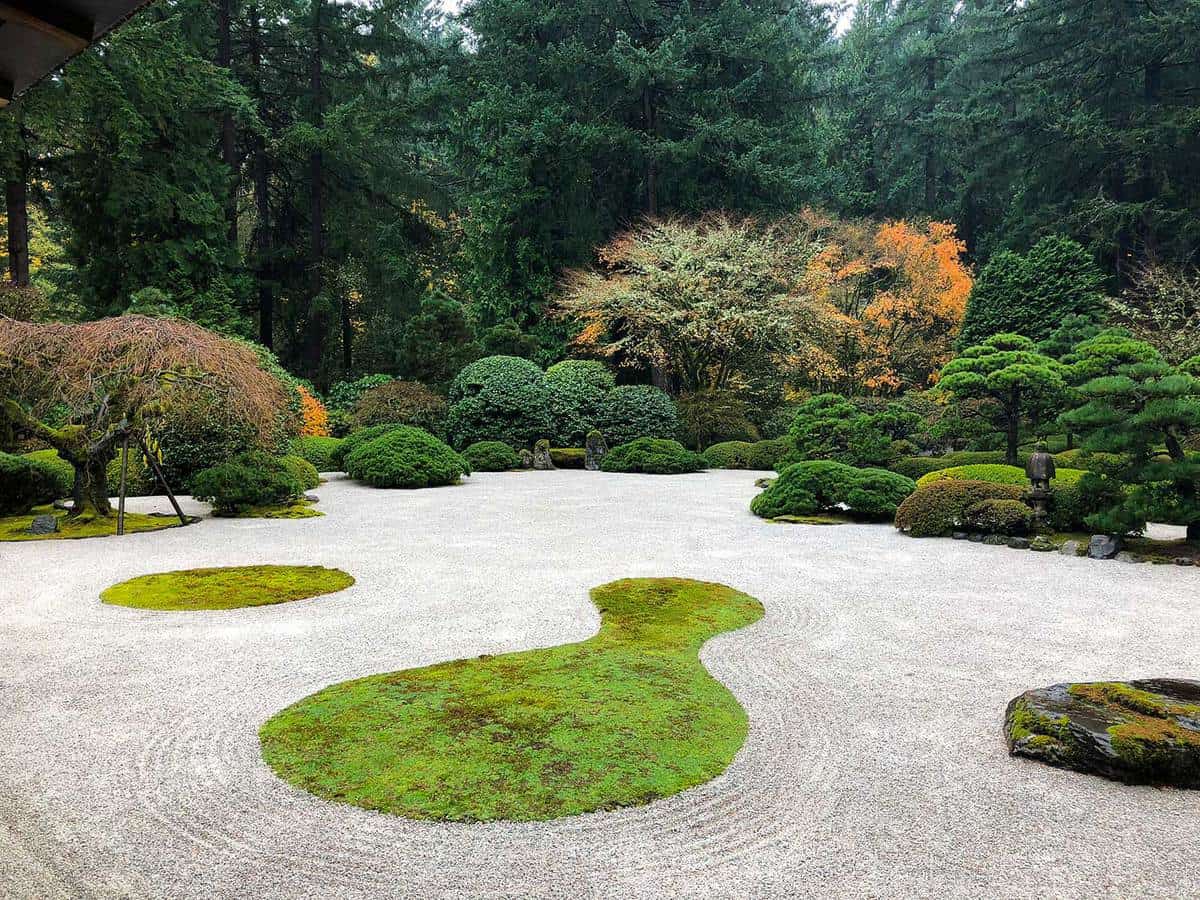 Though it's hard to tell at first glance, these green areas in this rock garden are actually stones that have been overgrown with moss, almost an intentional inclusion of chaos into a world that's supposed to represent order and peace. Click here to learn more about moss rock landscaping. 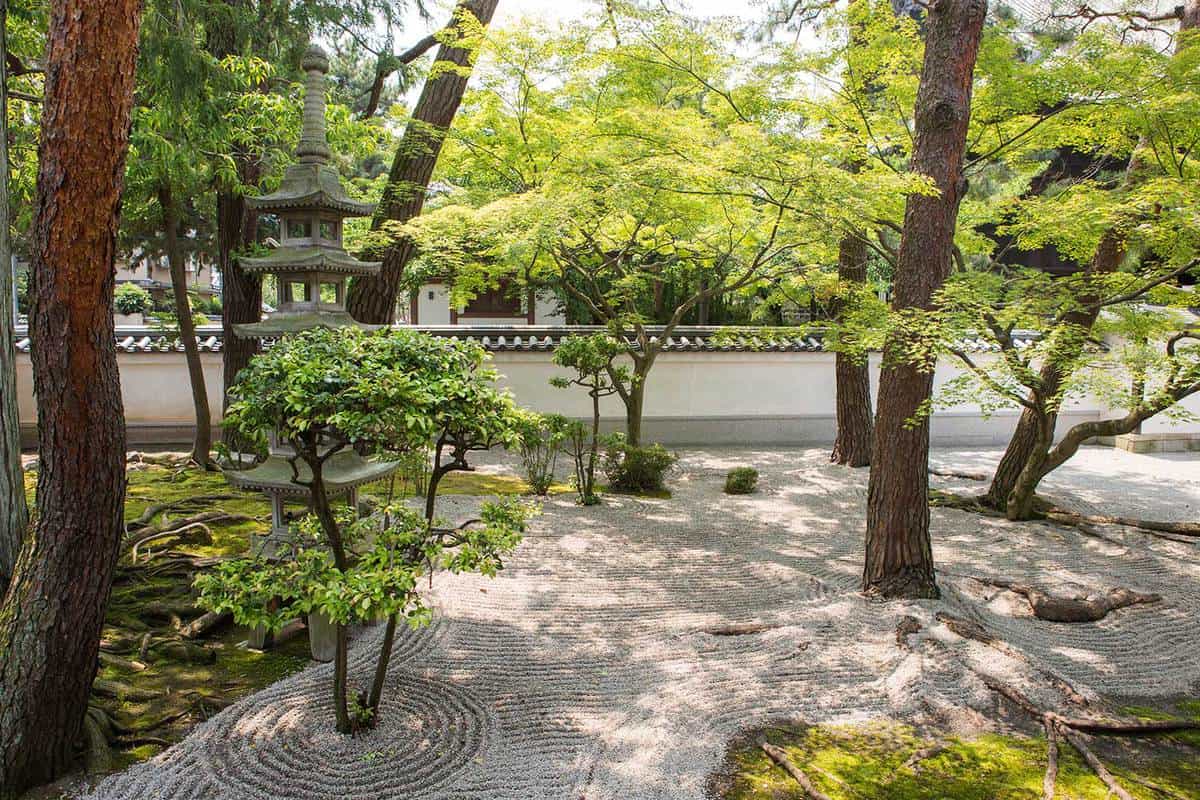 This is more of a traditional park with the raked sand of Japanese rock gardens thrown in, almost as a decor feature. 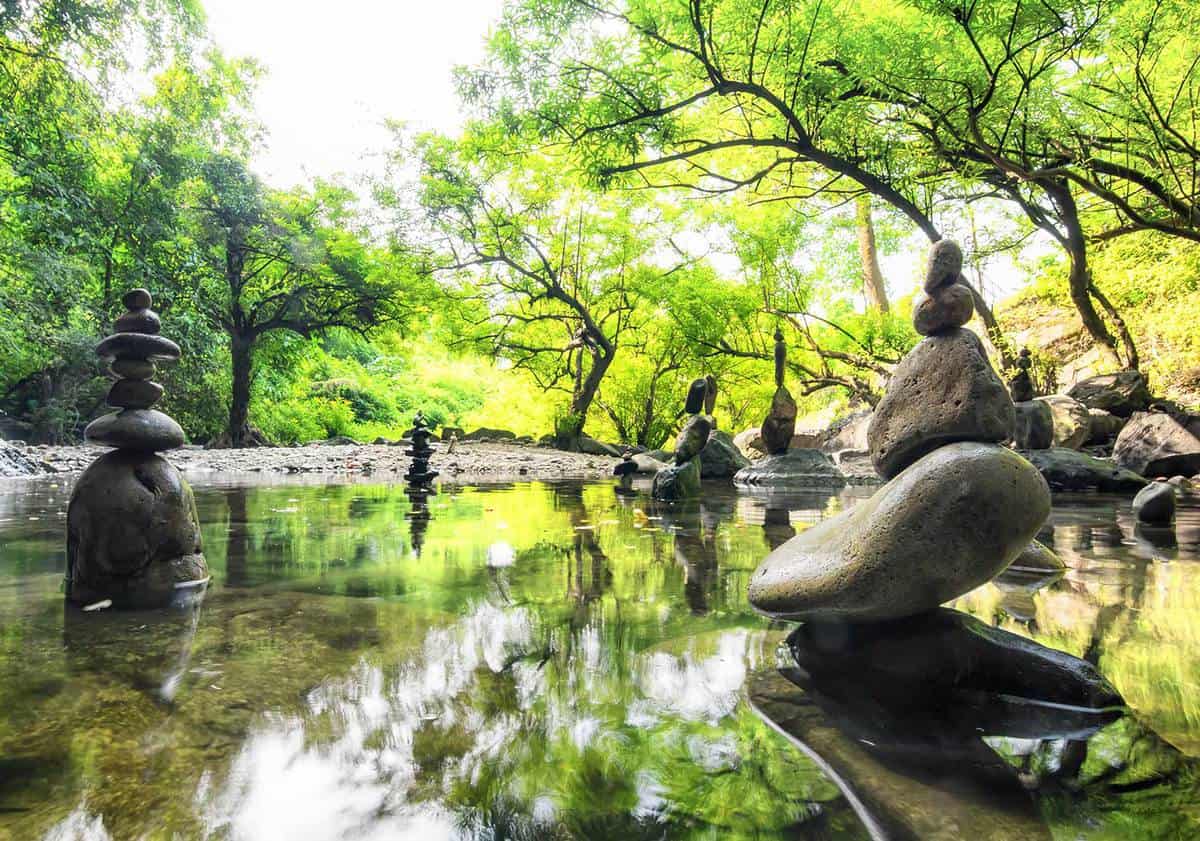 This isn't really a Zen Garden, but it has incorporated stacks of stones, which is a classic Zen Garden characteristic, typically included in Japanese Rock Gardens. 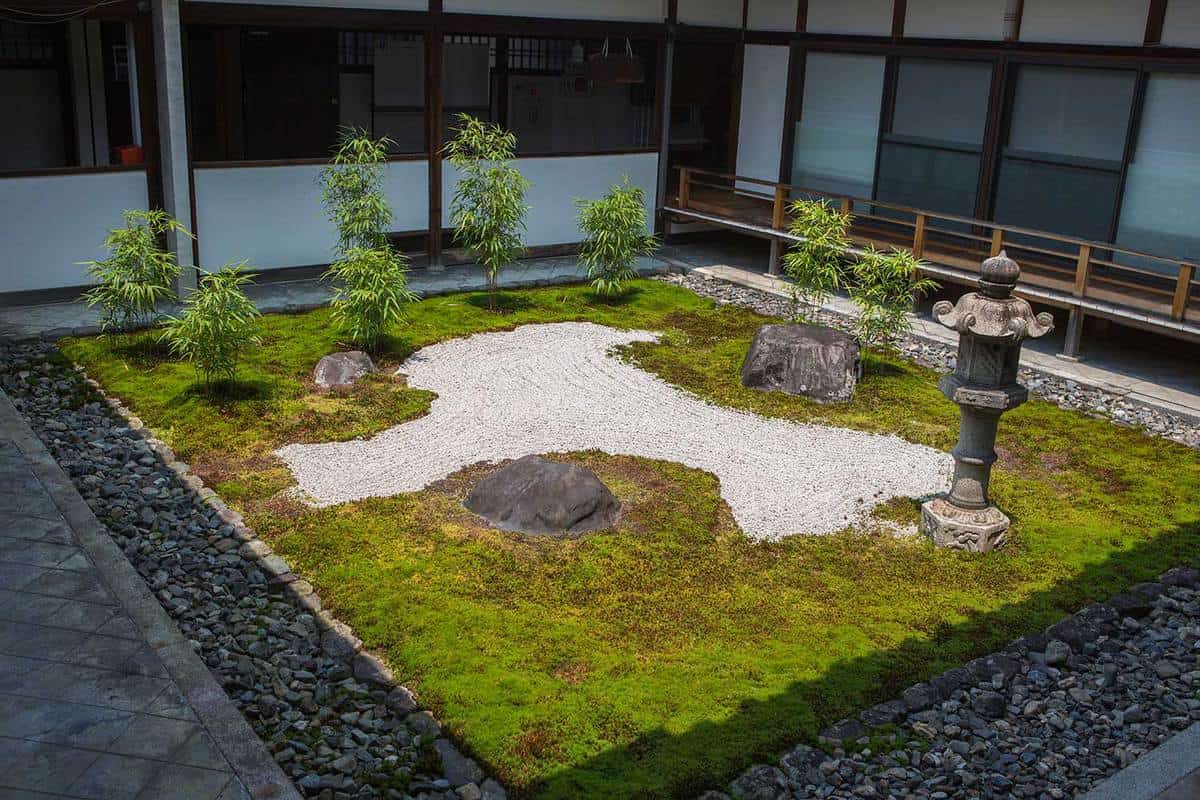 You can choose certain elements of Zen Gardens to incorporate. For example, a raked patch of sand, which typically represents water, instead of an actual pond. 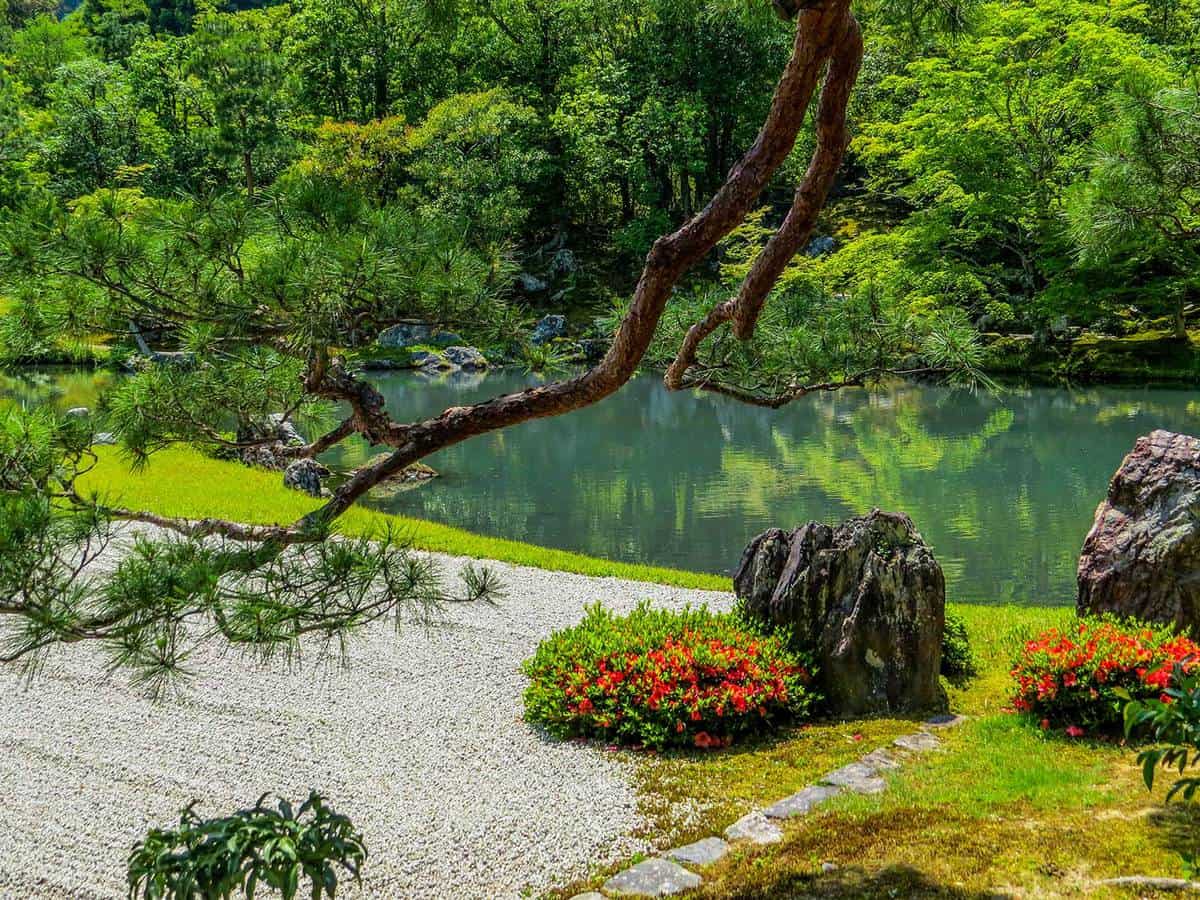 Incorporating a sand patch into your garden is a great way to add some unexpected contrast in a place where you wouldn't expect it! 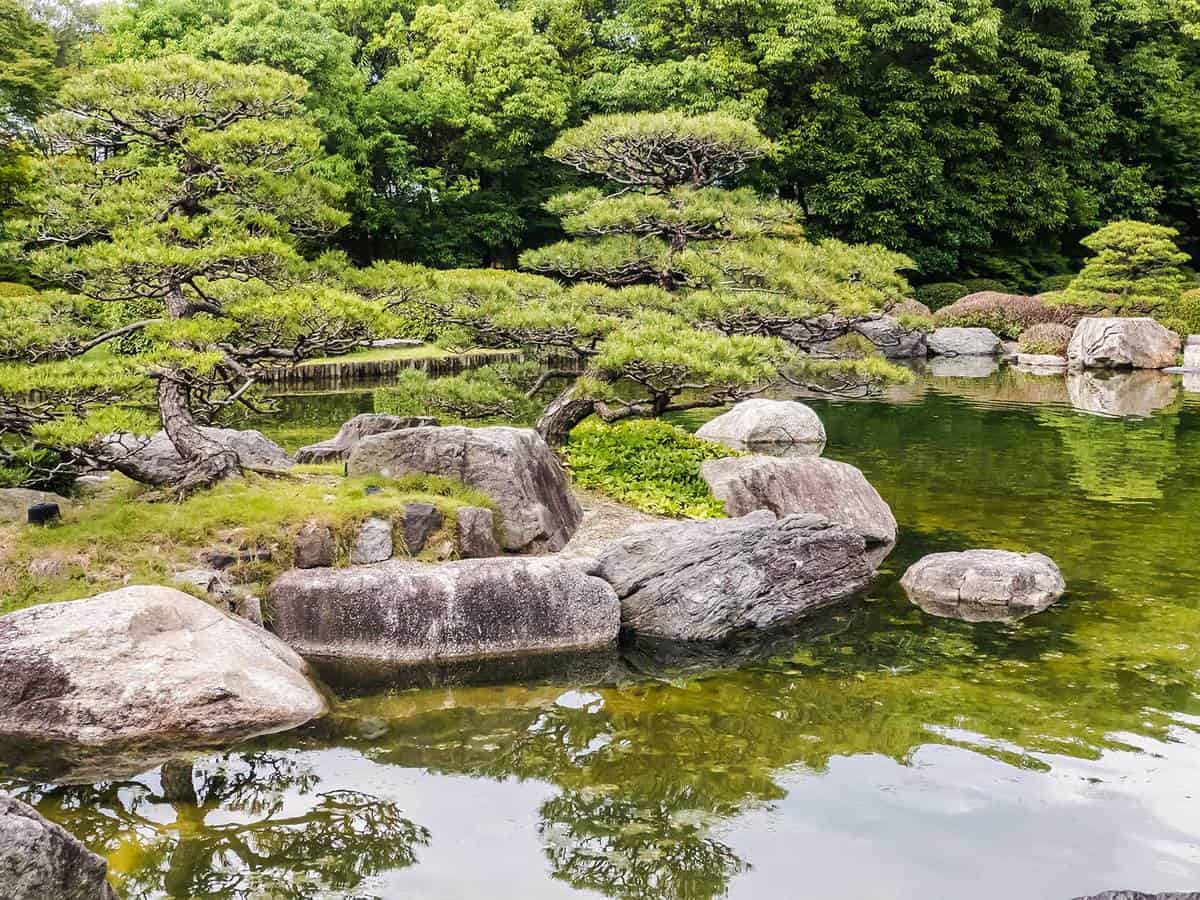 Though typical Zen Gardens don't include many plants or water, you can gain a sense of bonsai elements by including shaped trees of specific kinds. 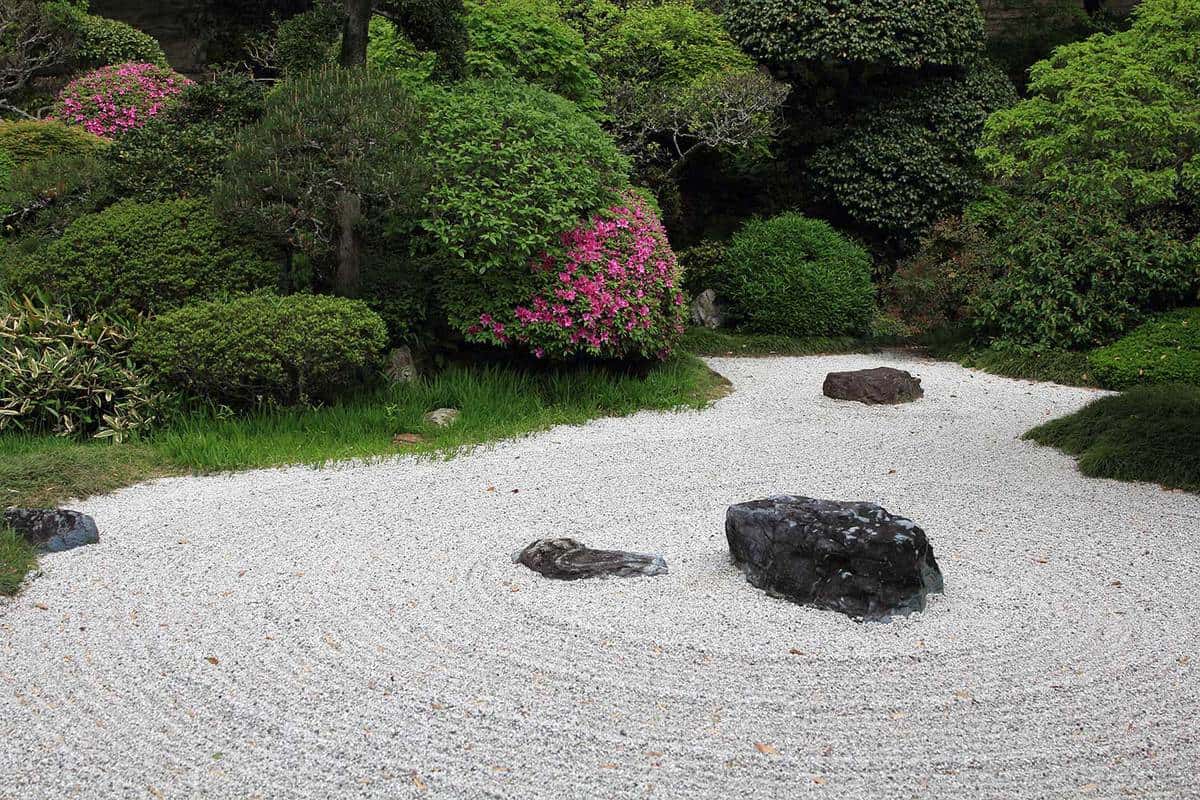 Zen Gardens are meant to promote peace and calm, and if that means including plants, then so be it! The inclusion of some trees and bushes may be just what you need. 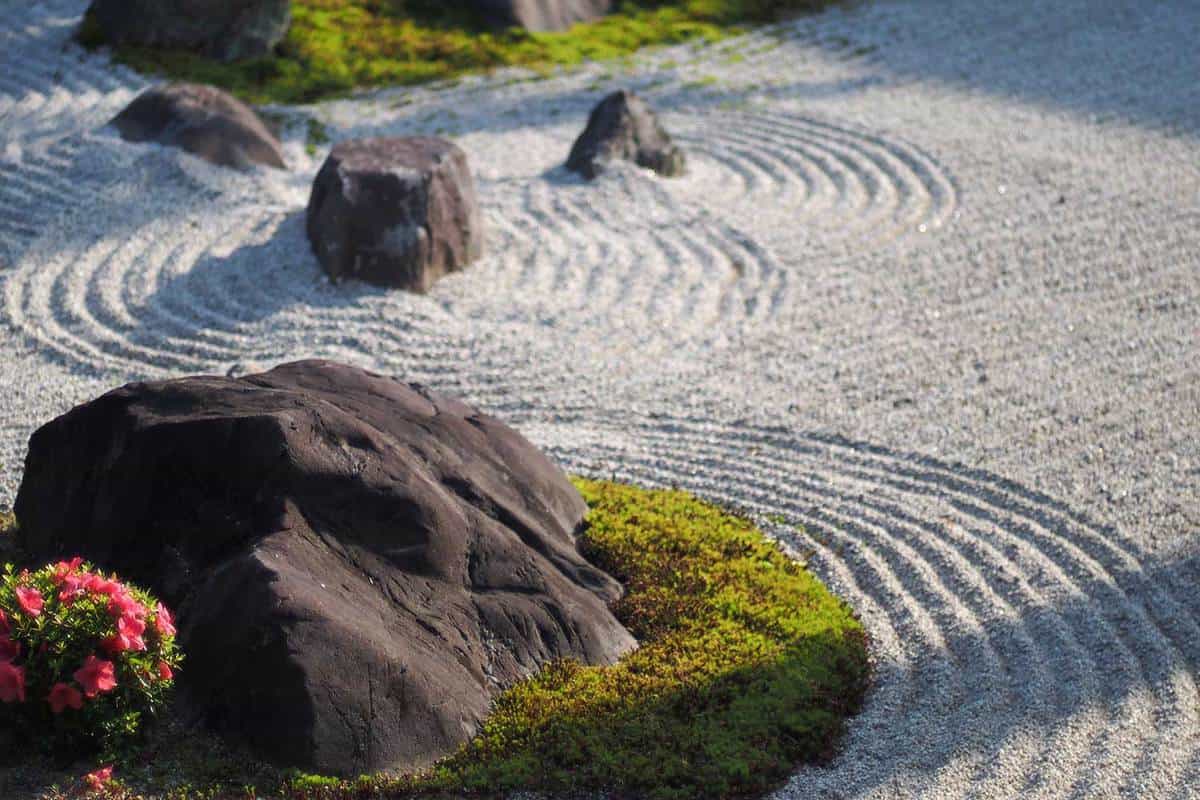 In Zen Gardens, lone rocks sometimes represent islands. Figure out a unique way to decorate and populate your island with a few plants!

The patterns raked into the sand are meant to represent the ripples and currents that flow through bodies of water, like rivers or lakes. 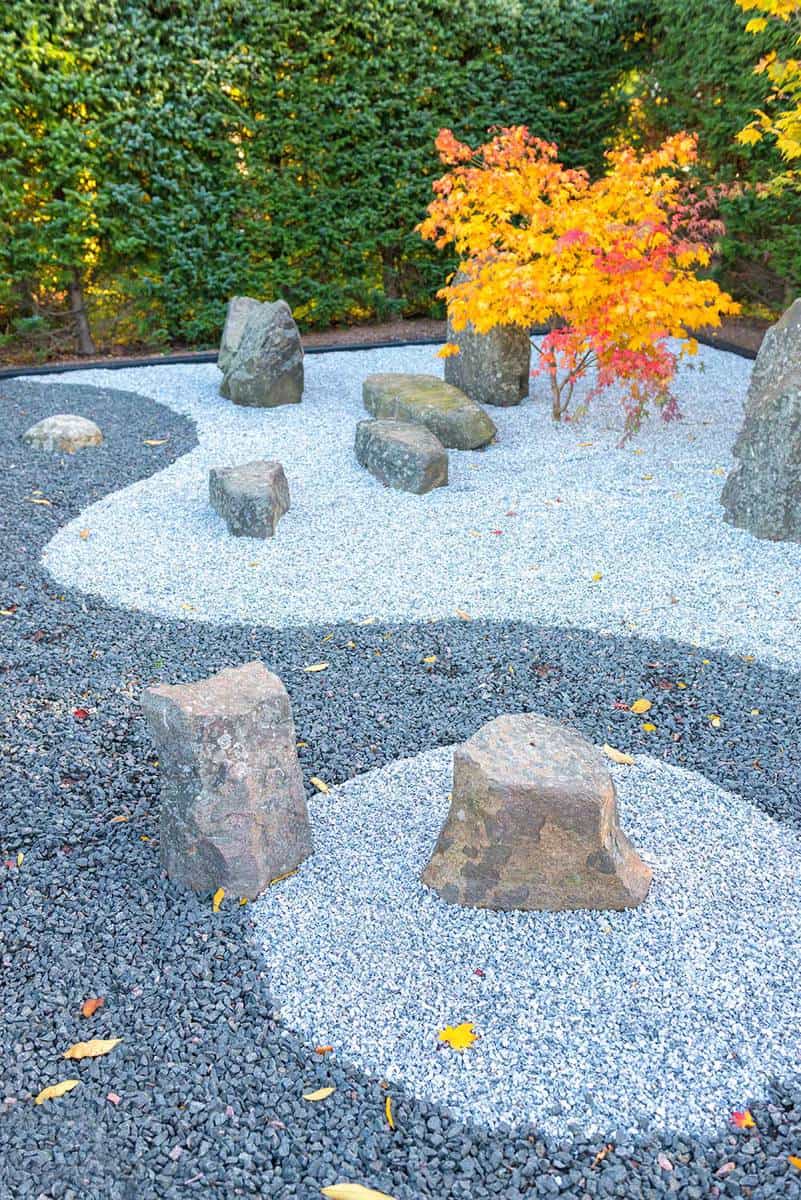 Using different colors of sand and gravel is a great way to replicate currents, differences in water flow, and to symbolize change. 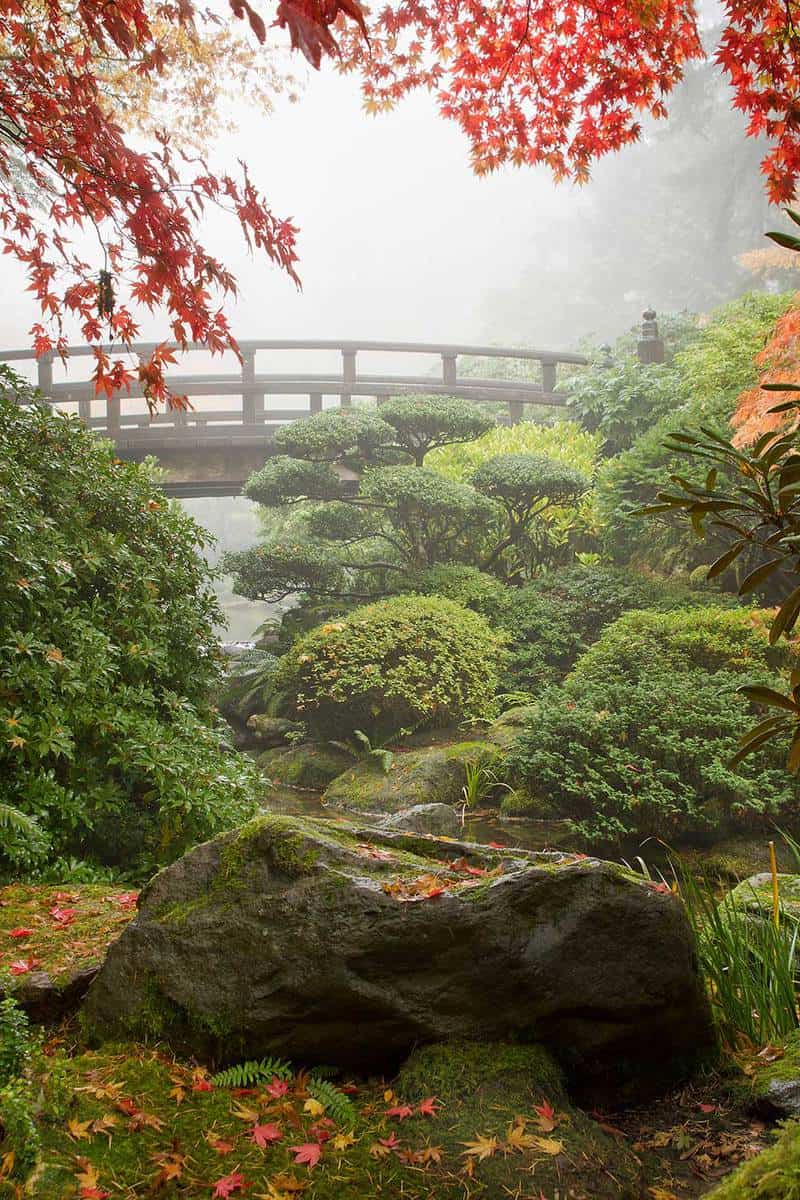 Bridges are one of the few man-made things that are permitted in traditional Zen Gardens, though if possible, they should be constructed to be as natural as possible, like using stepping stones or a fallen tree.

This is a great example of the kind of bridge you should try to include in your Zen Garden if you need to incorporate a bridge into your design. 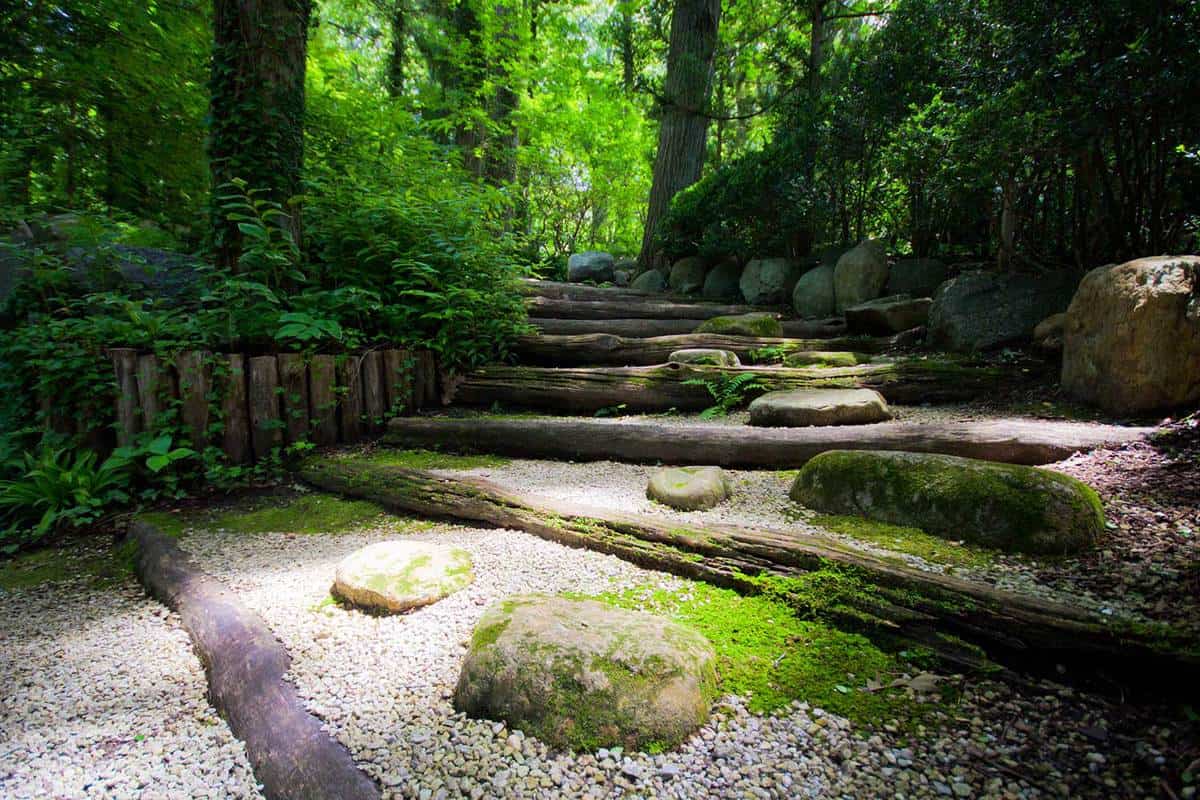 While there are more plants here than are typically included in Zen gardens, there are some great principles you can utilize. For example, using logs as steps instead of something like concrete. 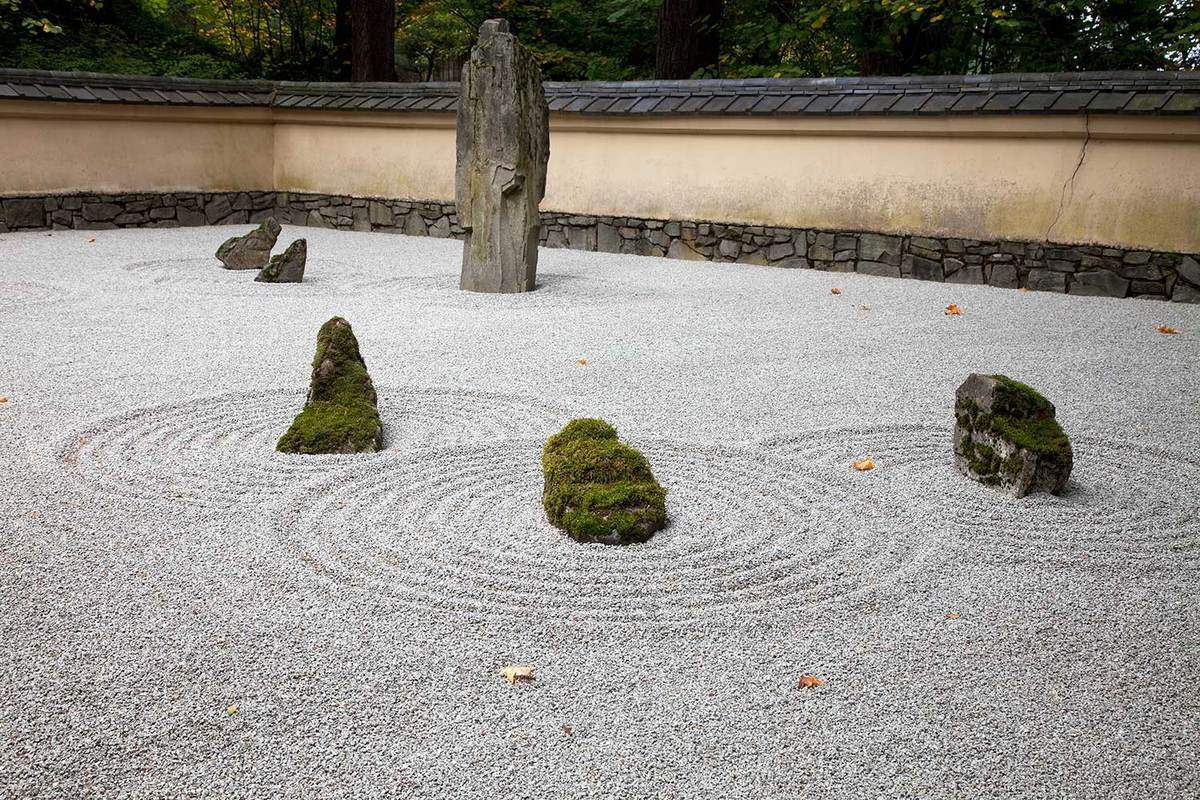 This is a perfect example of a Zen Garden. Minimal addition of anything aside from stone, a few current paths raked around the rocks, and with some moss on just a few of the rocks. 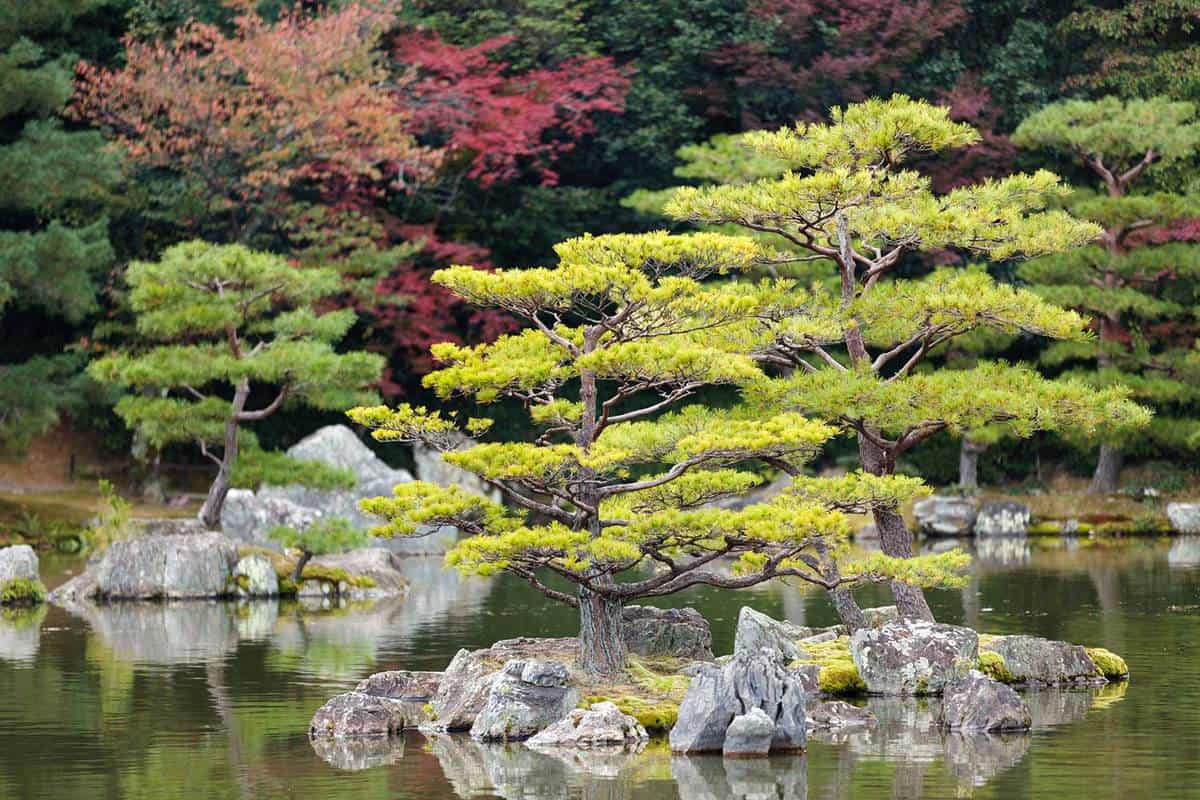 Including a water feature may be a great way to help you build your way toward having a perfectly peaceful garden to relax in. 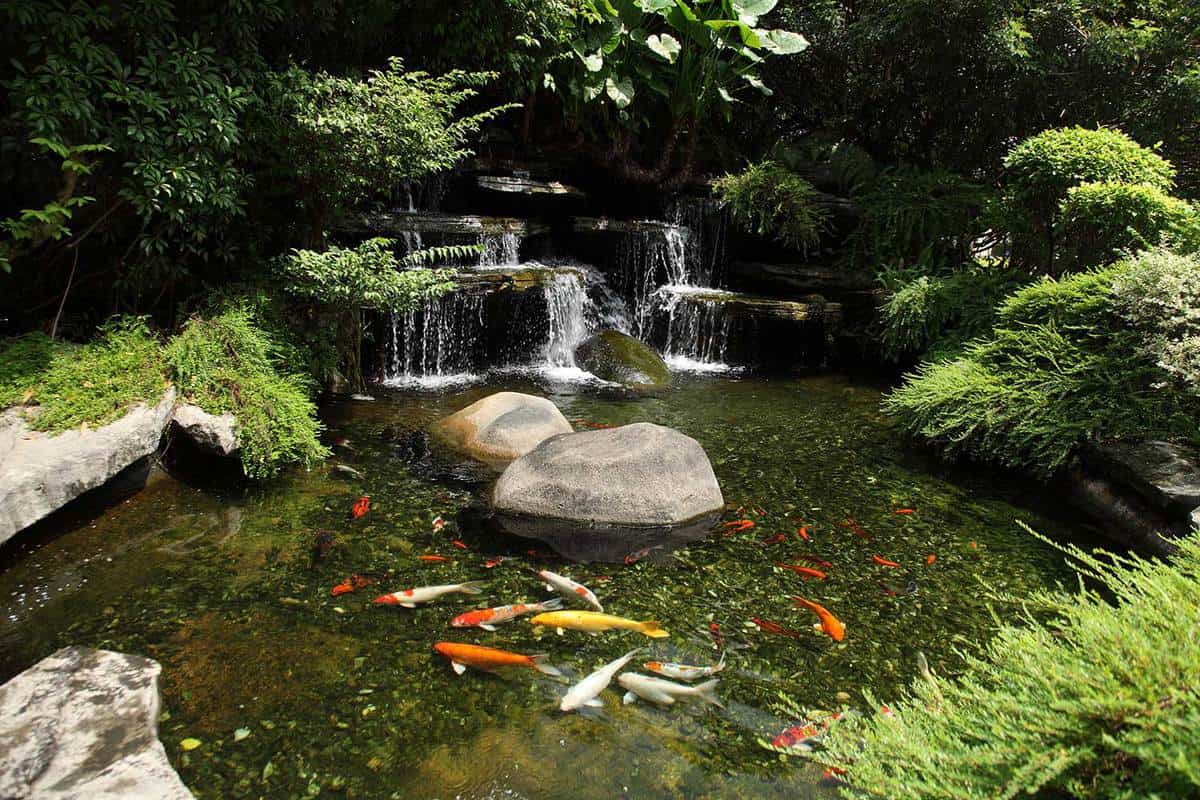 If you decide to include a pond, a koi pond may just be the way to go! Koi are supposed to represent courage, friendship, and good fortune. 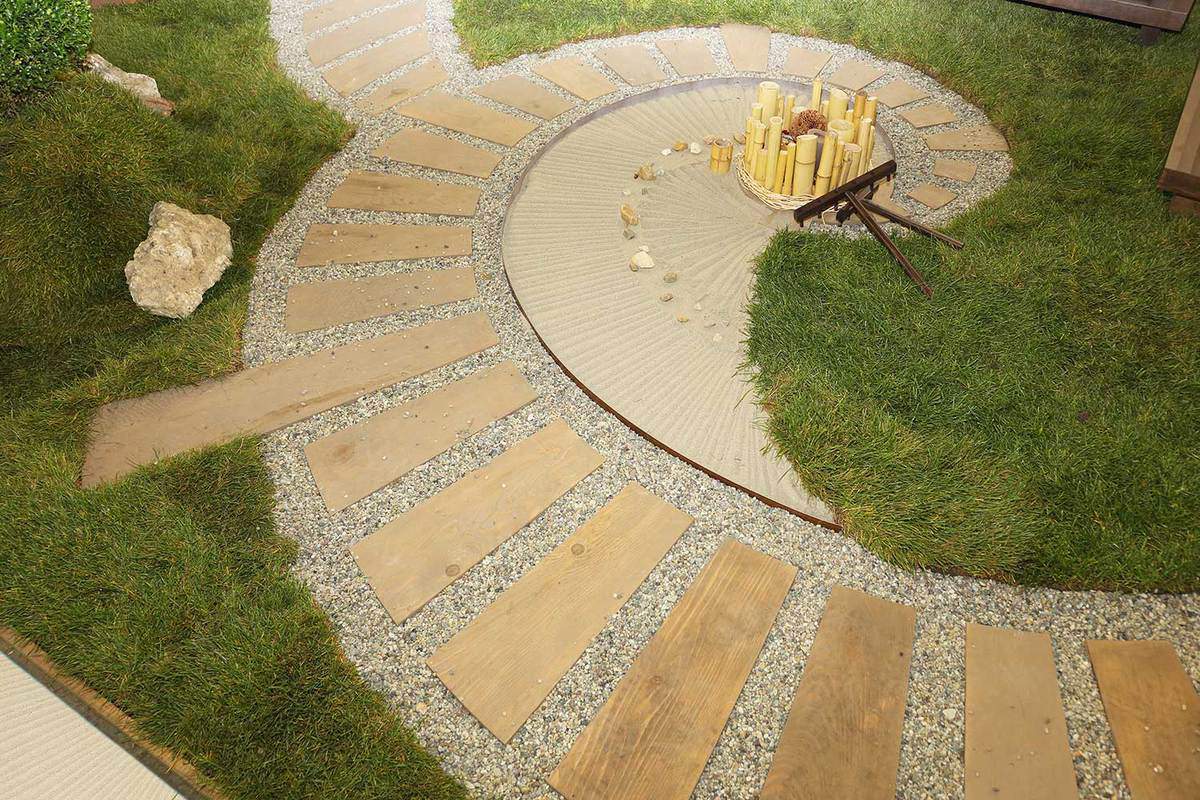 If structures do need to be included, making them out of bamboo is a good way to keep it as natural as you possibly can. To learn more about edging with bamboo, click here! 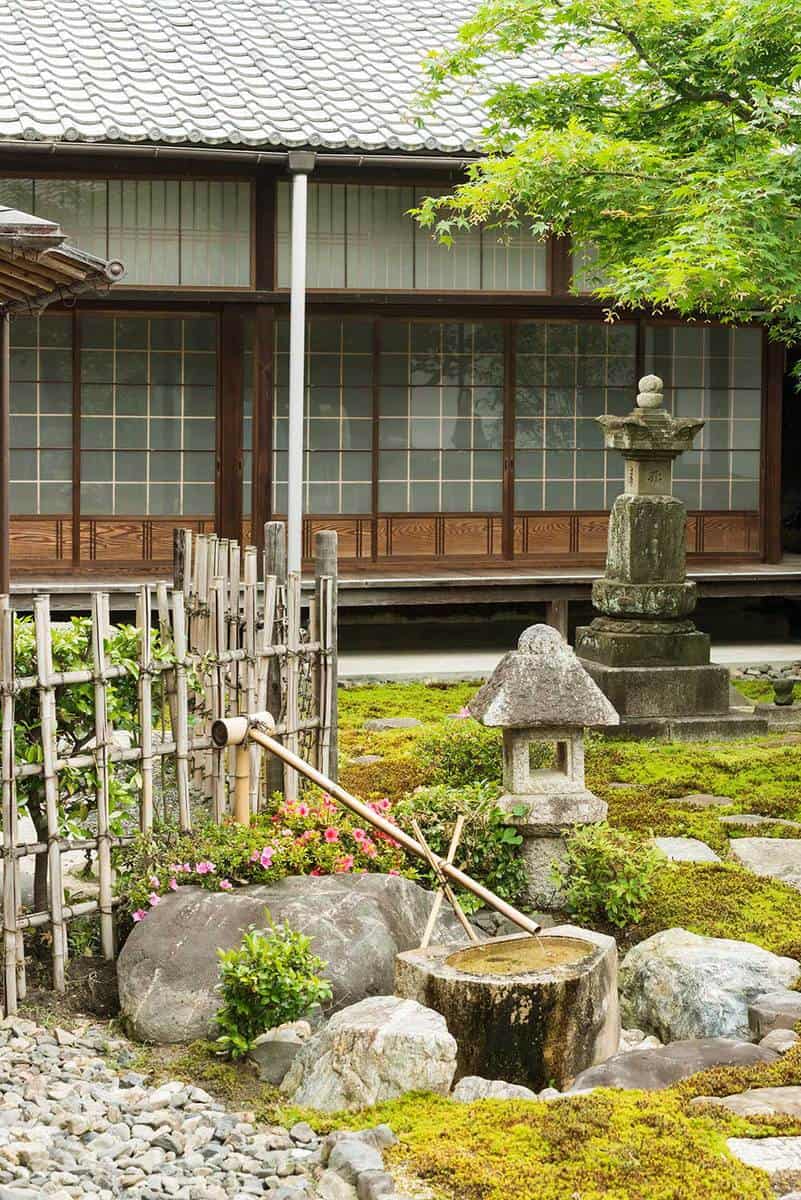 Fences and structures made out of stones and unaltered wood is the perfect way to build things that you need in your garden, without changing the rustic appearance it's supposed to have. 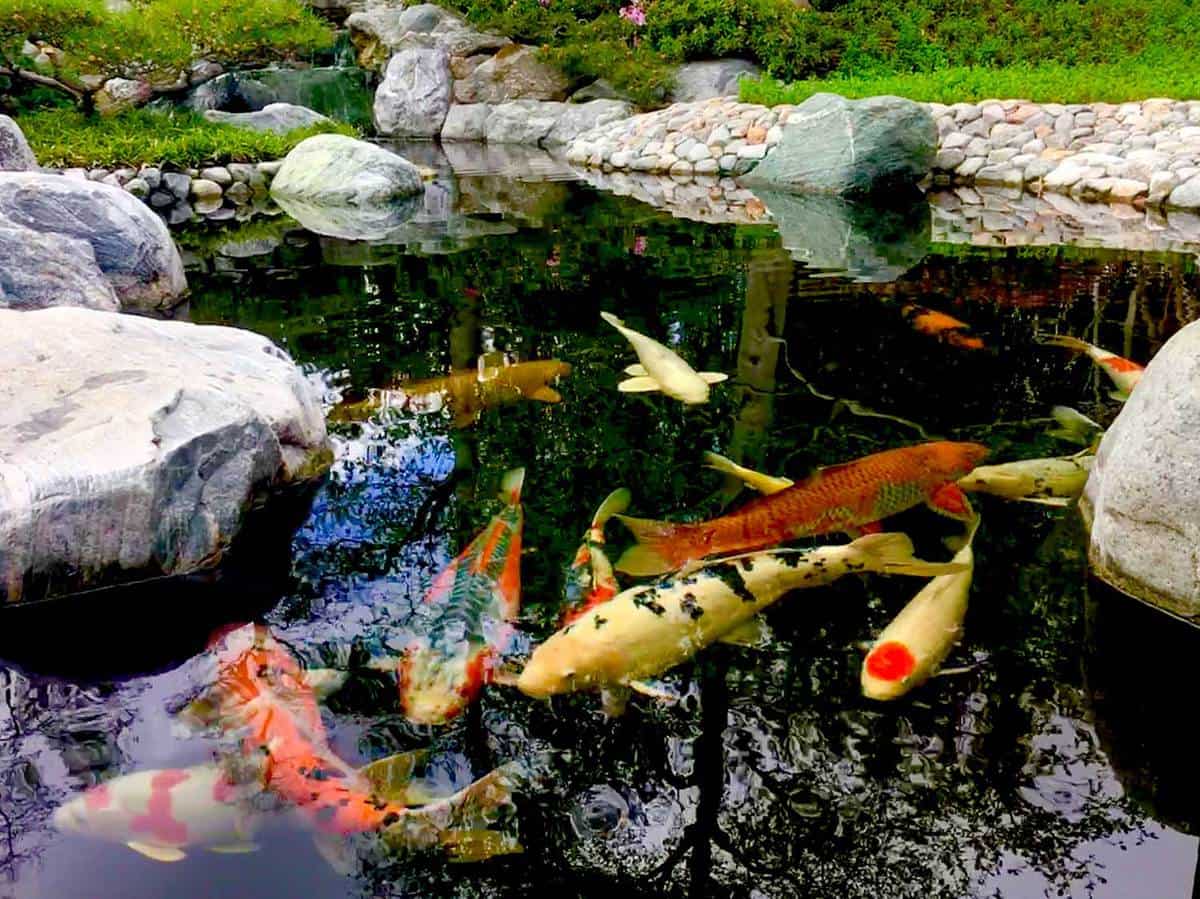 With Zen Gardens being all about symbolism, koi fish are a great addition to make. Red fish represent positivity, and golden koi stand for prosperity. 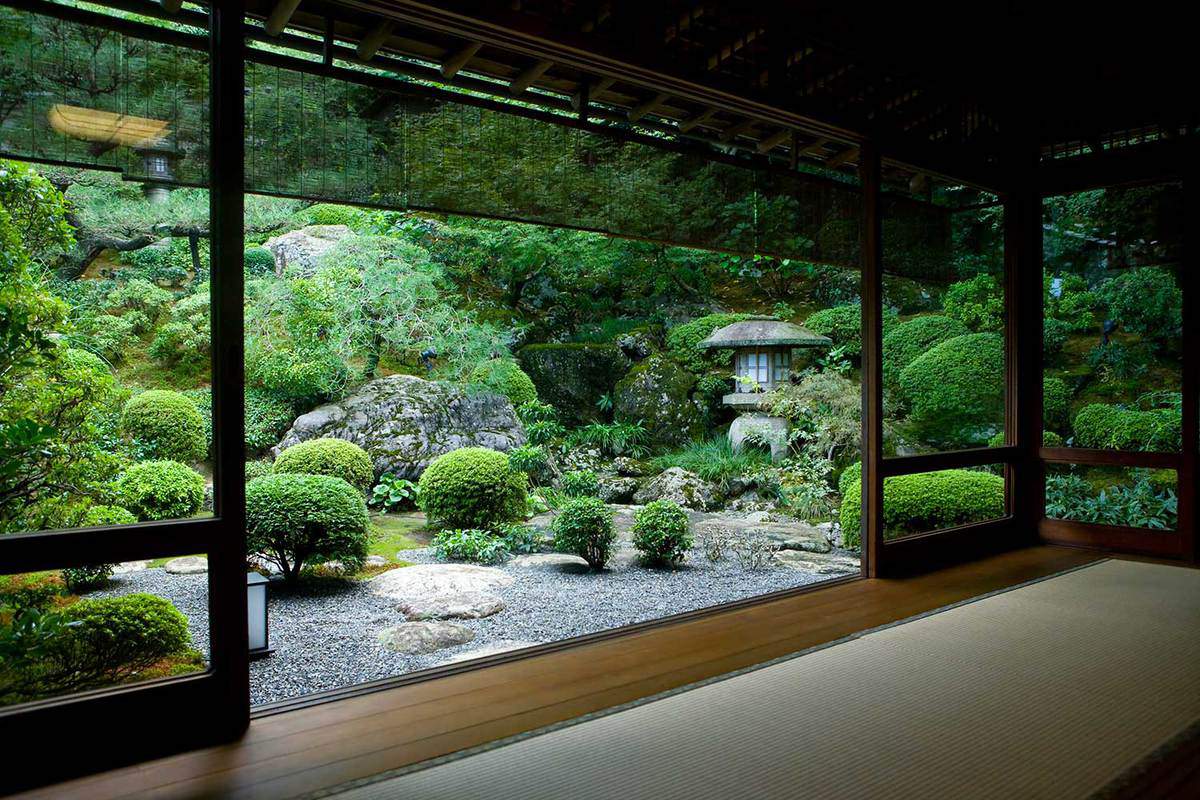 Having your Zen Garden within visual distance of an open room of your house is a great way to not only find peace in your garden but in your home as well. 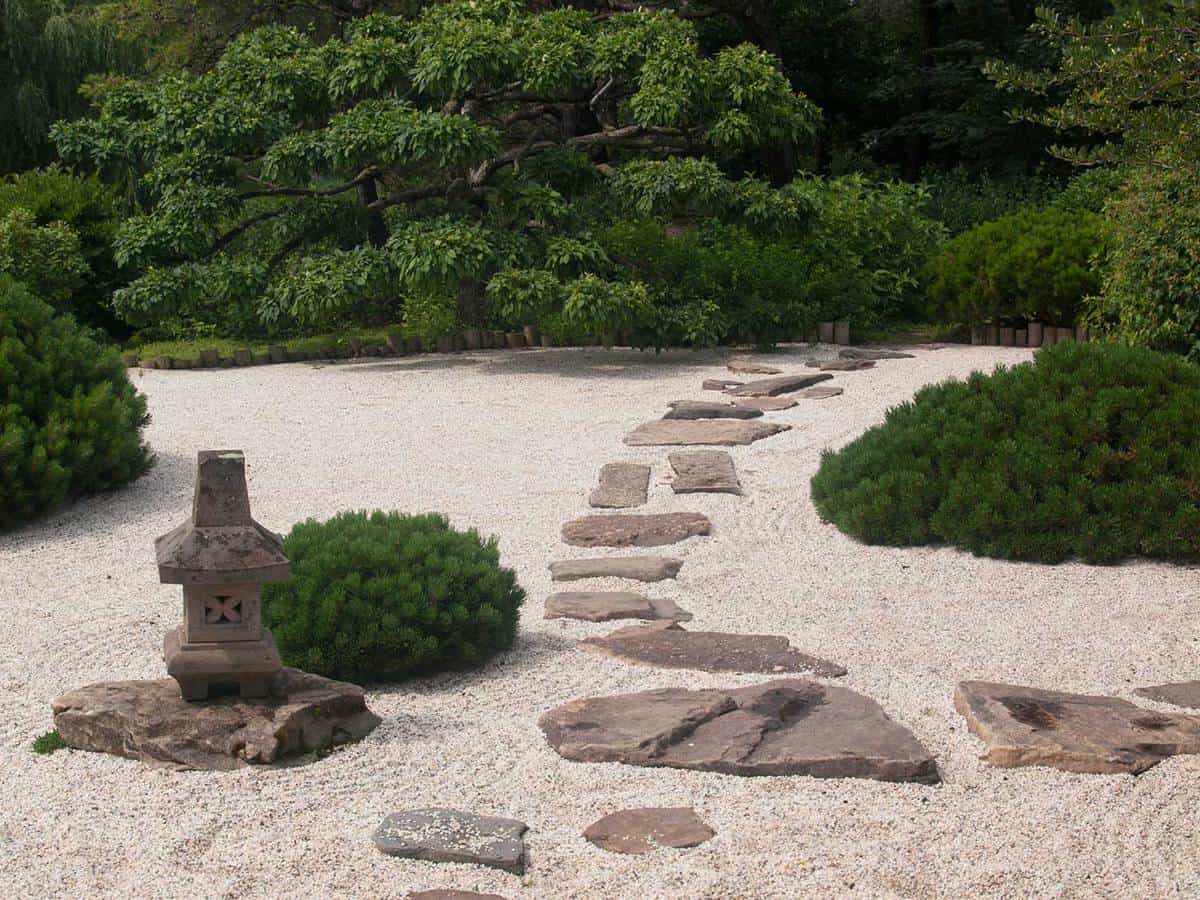 In accordance with classic Zen Garden principles, you are supposed to avoid the appearance of having something man-made in your garden. This stone path fits that ideal perfectly! 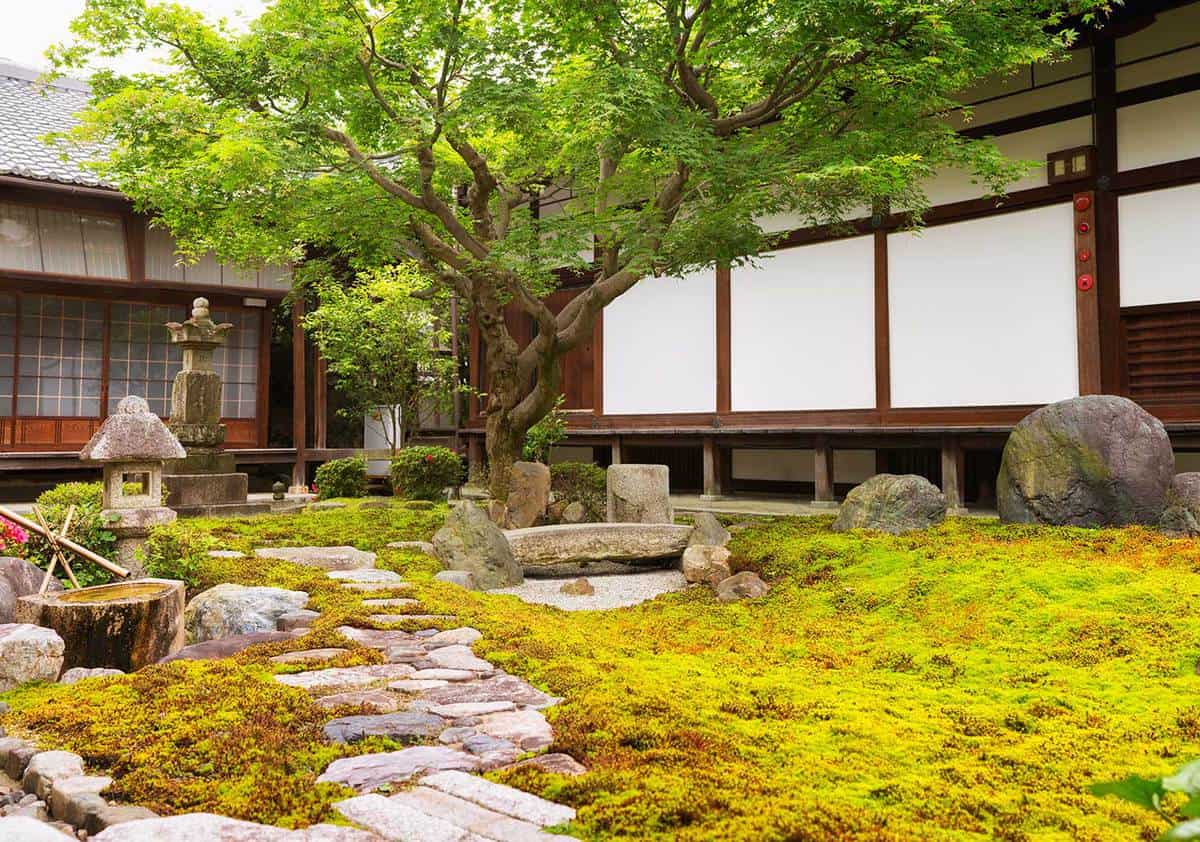 When including plants in your Zen Garden, groundcover plants are a great way to establish barriers without blocking anything visually. 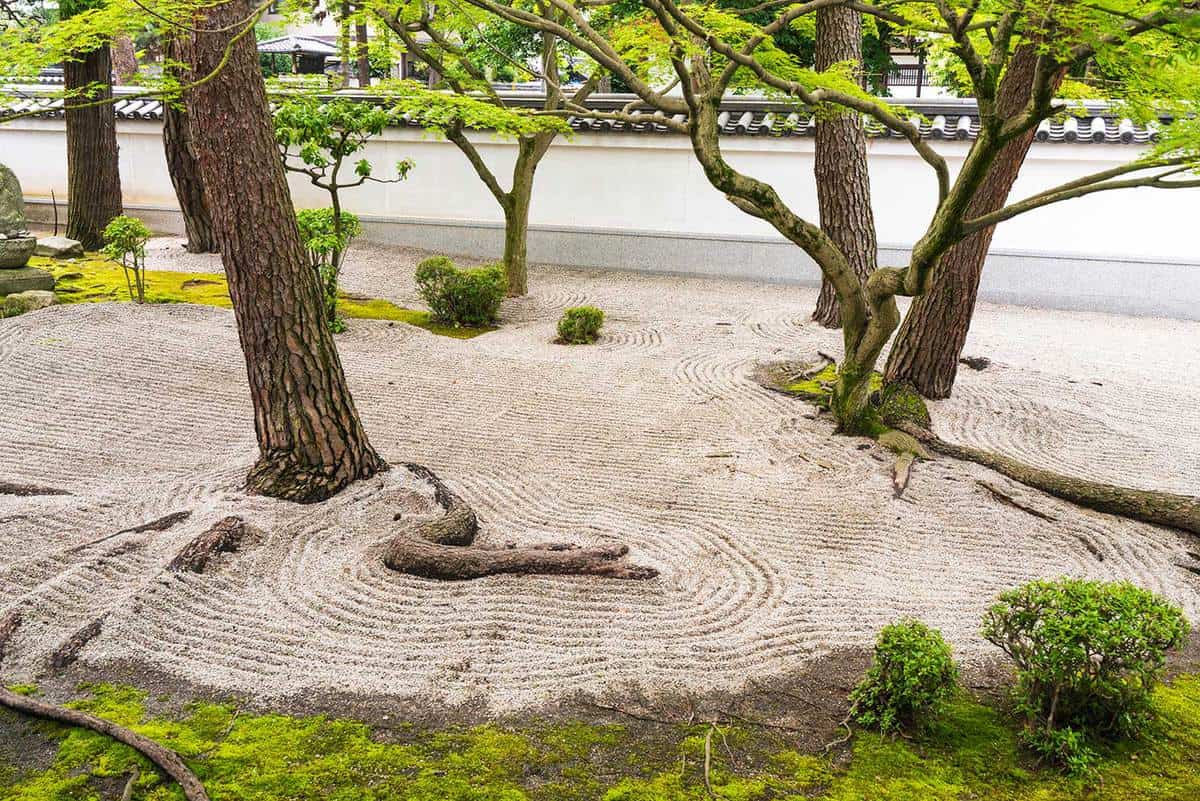 Even if you don't have the money for something fancy, you can build with what you have. For example, adding some sand and raking over it near these trees instantly brings your mind to Zen Gardens, even without the addition of other stones. 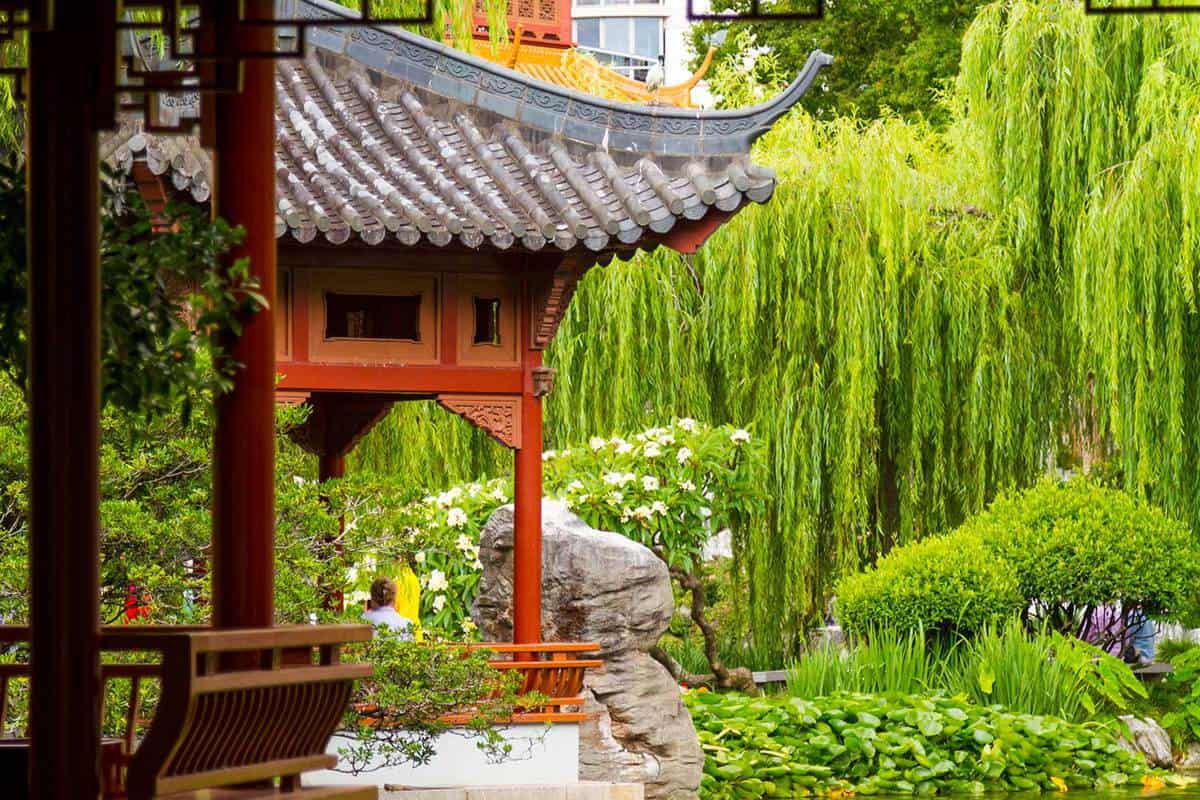 Willow trees, with their draping limbs and graceful appearance, are a perfect addition to any plant inclusive zen garden.

One of the best ways to make a Zen Garden is to work with the elements that already exist in the landscape to create a beautiful and cohesive aesthetic rather than work against them. 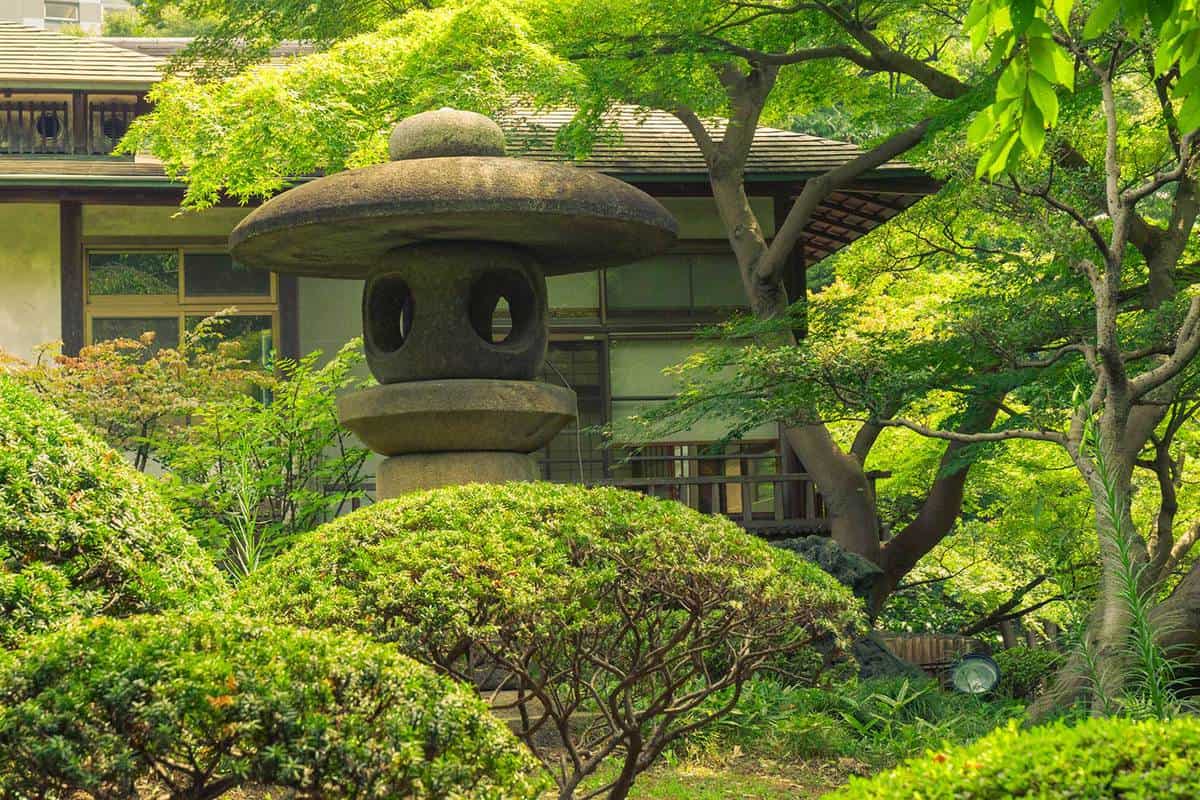 Stone structures are perfect for your Zen Garden, as they not only blend into the landscape, but they add symbolism as well. 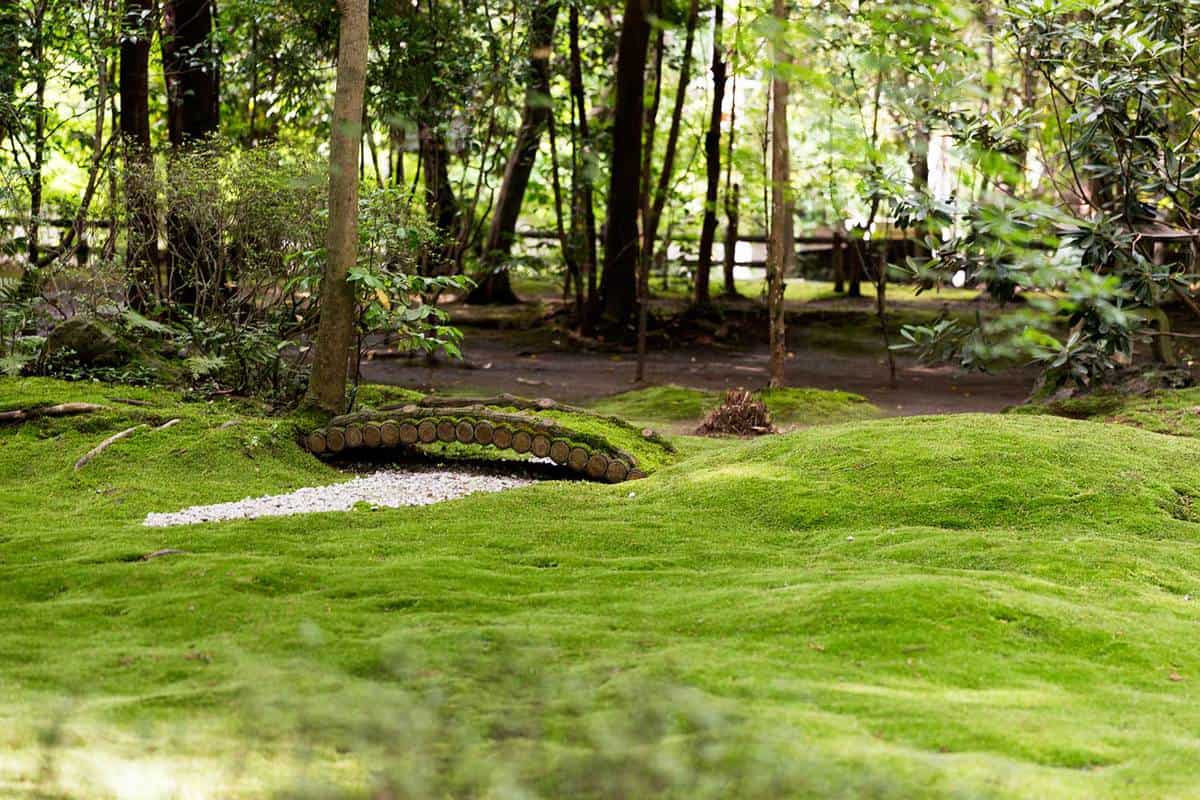 Logs that are overgrown by grass are the perfect combination to build a natural-looking bridge in your Zen Garden. 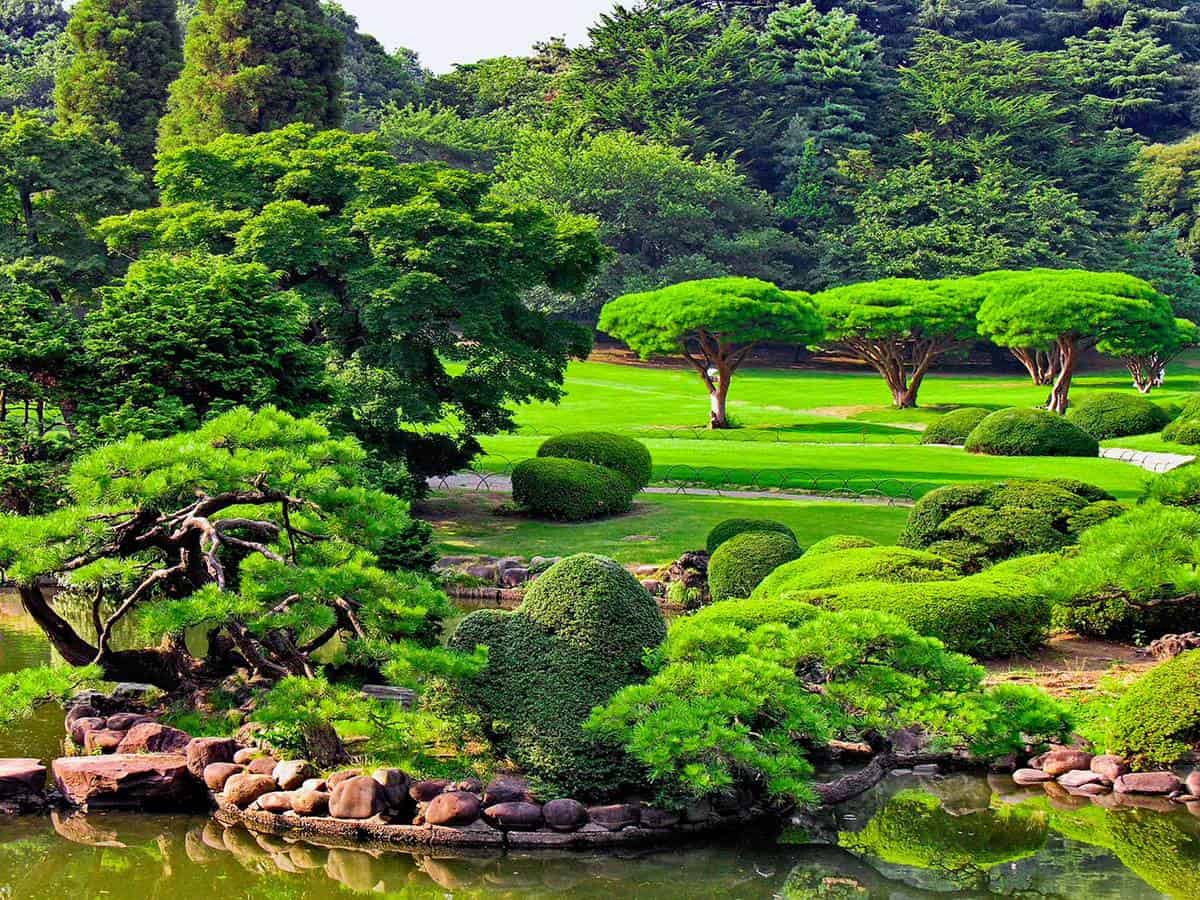 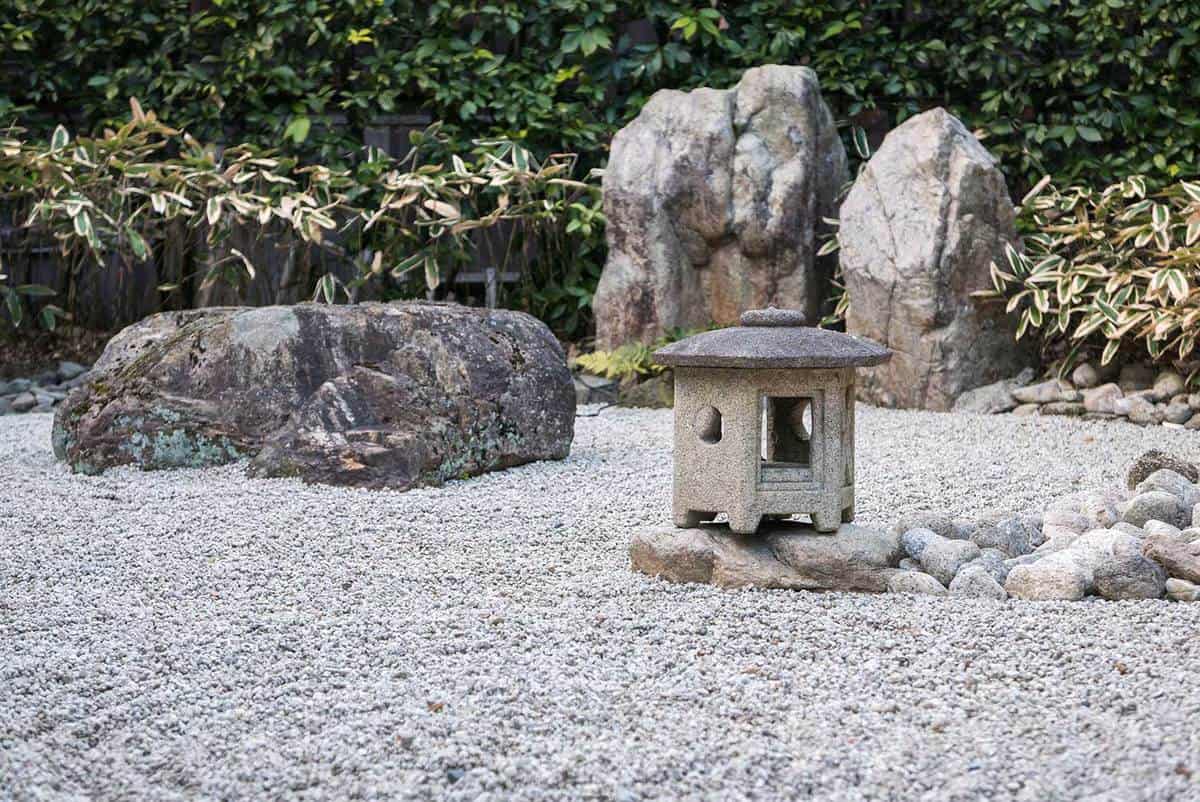 The use of stone in this example is perfect. The gravel is raked into circles, and larger stones to represent islands and structures are examples of classic Zen Garden. 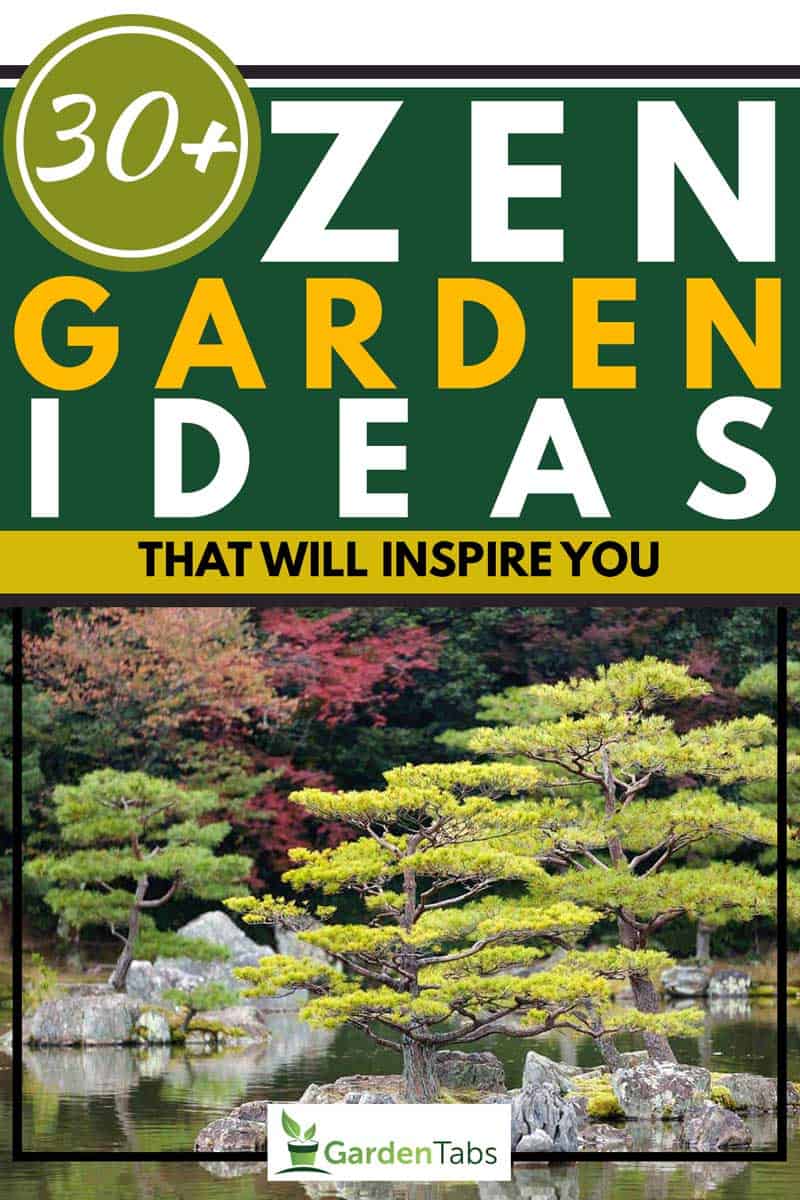 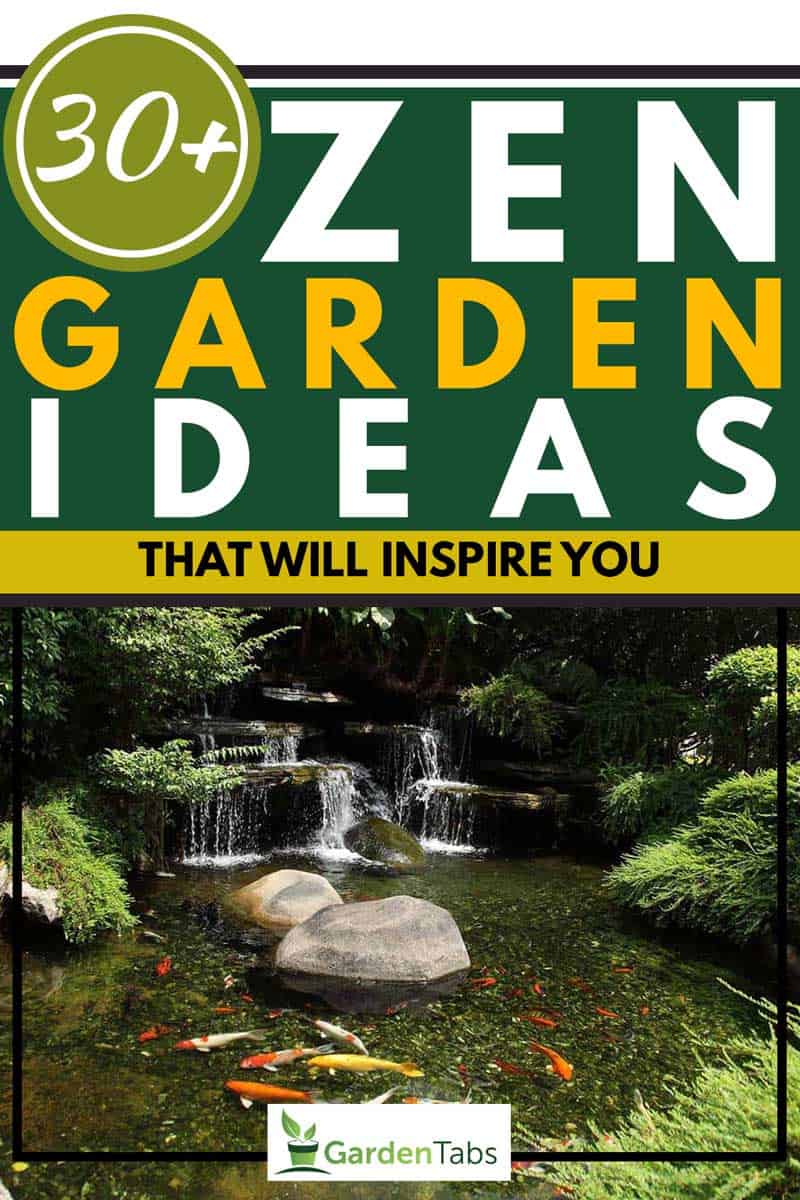