Most gardeners have a love-hate relationship with moles. These small mammals can help aerate the soil they dig in. However, they can also make lawns look unsightly and eat up your crops. If you have moles in your yard, you may wonder what happens if you use a lawn aerator. We've done the research and can tell you if any harm will happen to moles when using this tool.

It is possible for a lawn aerator to kill moles. If your aerator spikes are long enough or the moles are in tunnels close to the surface, you may hit the animal and kill it. However, lawn aerators are much more effective at deterring moles by destroying their tunnels.

It can feel frustrating when animals are destroying your hard gardening work. Keep reading to learn more about how lawn aerating can deter moles, other methods to get rid of them, and more! 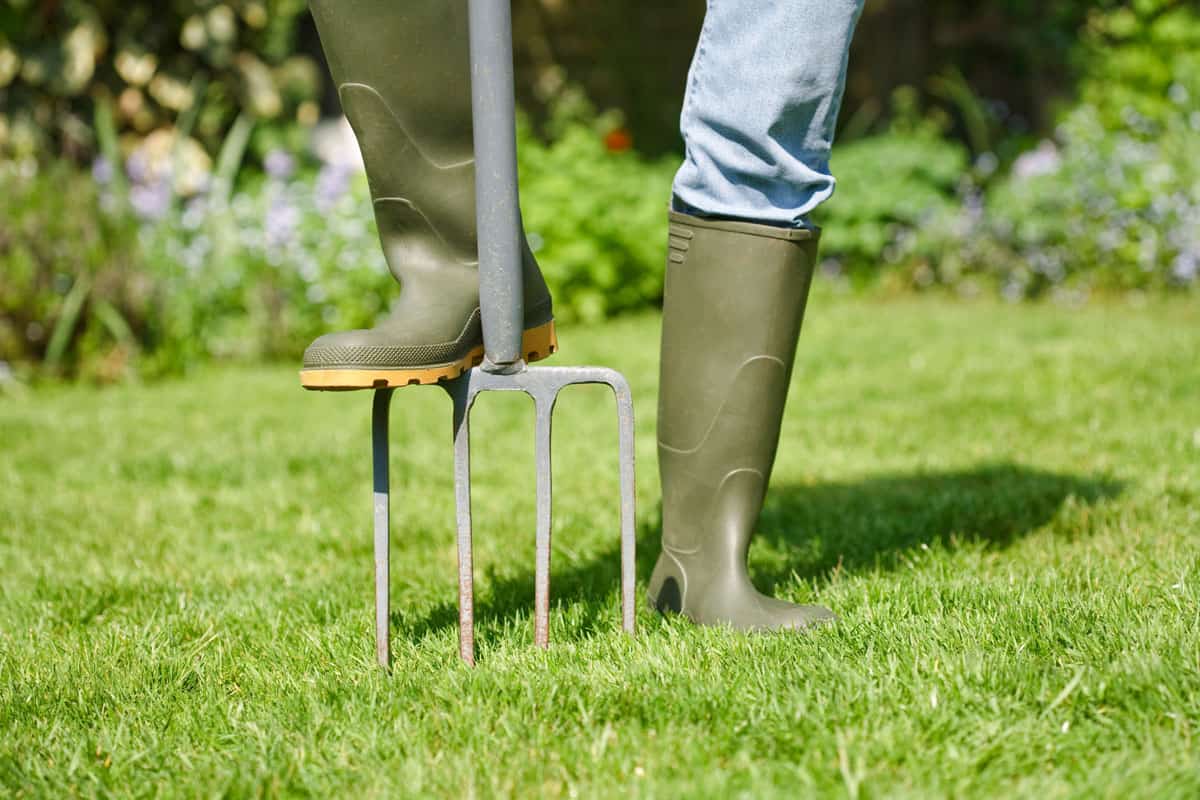 For lawn aerators to kill moles, the spikes would have to penetrate the ground deep enough to come in contact with the animal. Typically, most aerator tines are up to four inches long.

Moles create tunnels at various depths. Surface tunnels can be as shallow as one to four inches below the surface. Moles also create deeper tunnels that are between four and 12 inches deep. However, some tunnels may run as deep as 40 inches.

If a mole happens to be traveling along a surface tunnel while you're aerating, there is a definite chance of you hitting and killing it, especially if you have an aerator with longer tines. However, this is no guarantee, mainly because you're not sure how far down the surface tunnels are.

Check out this post for more information: How Deep Does An Aerator Go? 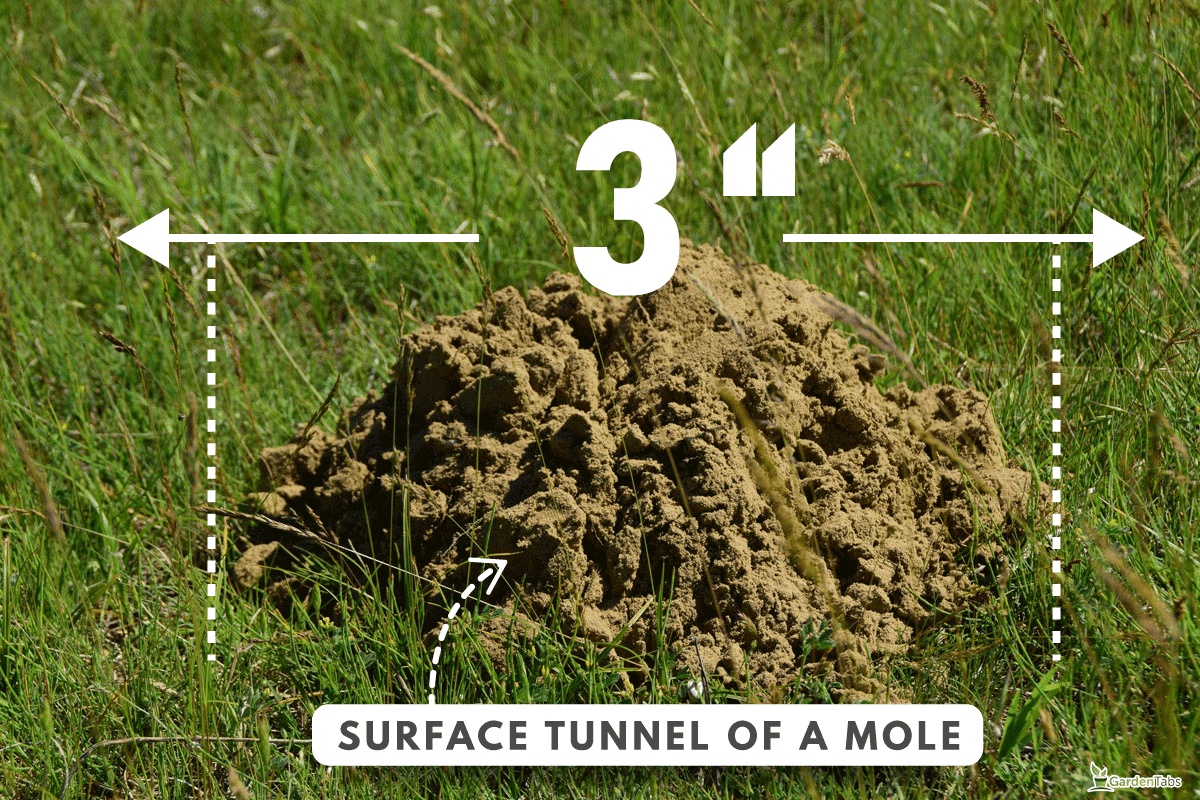 To deter moles from returning, you need to destroy the ways they travel and limit their food source. Using a lawn aerator can help you quickly and easily collapse an entire tunnel system. Then, you can use traps, poisons, or deterrents to prevent them from coming back.

Before using a lawn aerator, you should determine where the surface tunnels are. Look for areas where there is raised dirt or mulch. Surface tunnels typically look like three-inch wide areas of raised soil. You may also feel the ridges when you're walking in your yard.

Next, water the area where you plan to aerate. Do this a few days beforehand, and only give the area about an inch of water. You want your soil to be moist but not soggy when you aerate it. Another option is to work the soil after a recent rain.

A few days after watering, you can aerate the area where you have a mole problem. Work in rows, first going in one direction, then work in rows perpendicular to your first set. 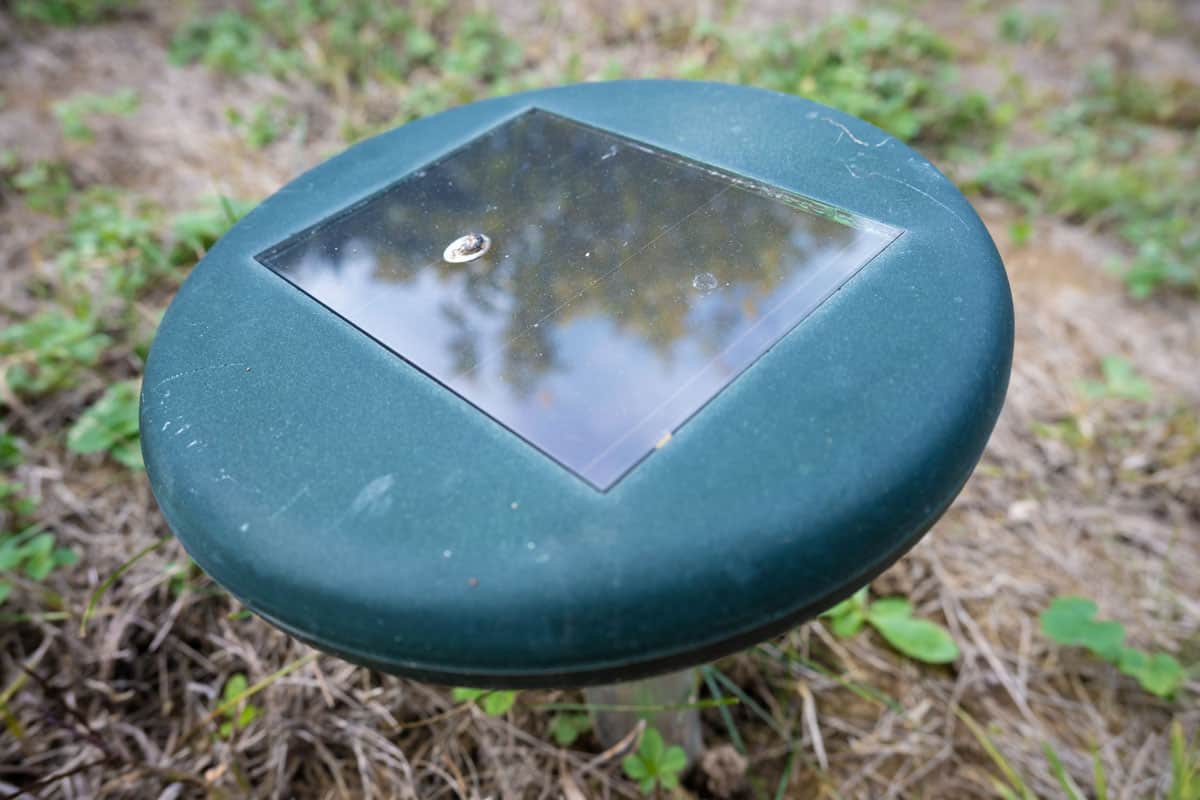 After causing the existing tunnels to collapse, you should also add some sort of deterrent. You can make your own by combining three parts castor oil and one part dish soap. Then, take four tablespoons of the mixture and put it into a gallon of water. Finally, drench the area with the combination.

Moles hate castor oil. Soaking the soil in this concoction will affect the soil and food the moles eat. Once the mole's food is changed, it will leave to find a better location.

You can also try other natural remedies like red pepper, cayenne pepper, or coffee grounds. However, these methods are less effective. It will also be important to reapply these items after watering or if it rains.

Another option is to use mole spikes. These objects go into the ground where the tunnels were. The spikes will help deter moles by sending out pulses of sound vibrations. These vibrations are supposed to scare the moles away and keep them from coming back.

If you're willing to use poisons to eliminate moles, you should consider using bromethalin or warfarin. Both of these methods have proven to be effective at killing moles.

However, you should be careful when using poisons. There is a possibility of cross-contamination if you plan on growing edible crops. In addition, these methods tend to be more effective in active tunnels.

Finally, you can flatten the soil in areas where the mole tunnels were. This is most effective when used after aerating. However, you could just flatten the tunnels. Compacting the soil will make it more difficult for the mole to travel. Combined with other methods, this can be very effective at keeping moles away.

Find the mole repellent on Amazon.

How To Trap Moles 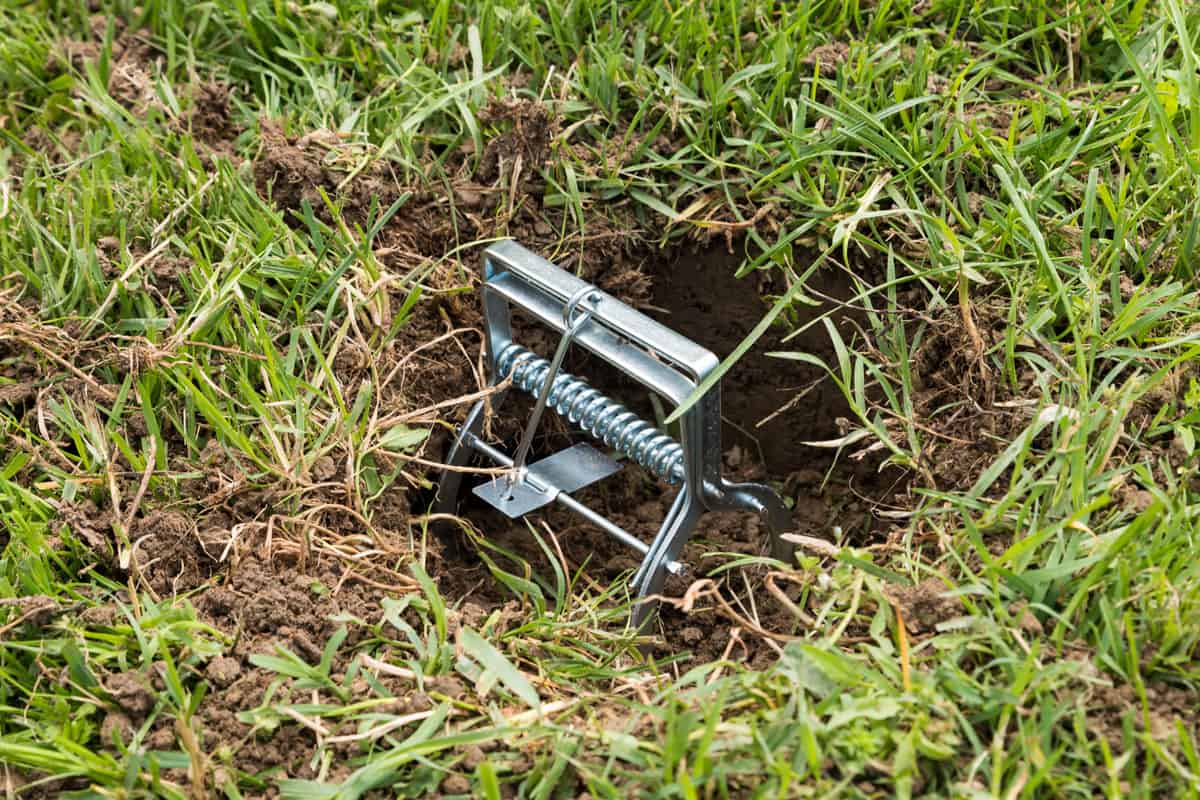 After you find the tunnels, test if they're active. You can test them by compressing the soil. If the mole uses the tunnel, the dirt will be raised again within 24 hours.

Once you find an active tunnel, you can set the traps. Most traps are lethal. However, there are some non-lethal options available. Ensure your trap is set correctly, and check back every day to see if the mole has been caught.

You can also force moles out by flooding the tunnels. To do this, you'll need a bucket to capture the escaping animal. You should also wear protective gear so you don't get bitten.

Check out this trap on Amazon.

Take a look at this trap on Amazon.

How To Dispose Of Moles

Once you've captured a mole, there are a few different options to dispose of it. Dead animals can be buried, used in compost, or disposed of at a licensed disposal site.

After a mole dies, you can remove it from its trap and place it back onto the ground. It will decompose naturally, and other animals can scavenge the remains.

You can also compost the carcass if you're not concerned about diseases or poisons that the animal may have ingested.

Depending on the size of the mole, you can also dispose of it at a disposal site. Be sure to seal the animal in a sturdy plastic bag before throwing away.

You'll need to relocate live moles far away from your or other people's property. Some states also require you to move the animal to a place where they have access to food and water also. Before moving the animal, you should call your local animal control for advice or hire a professional to remove it. 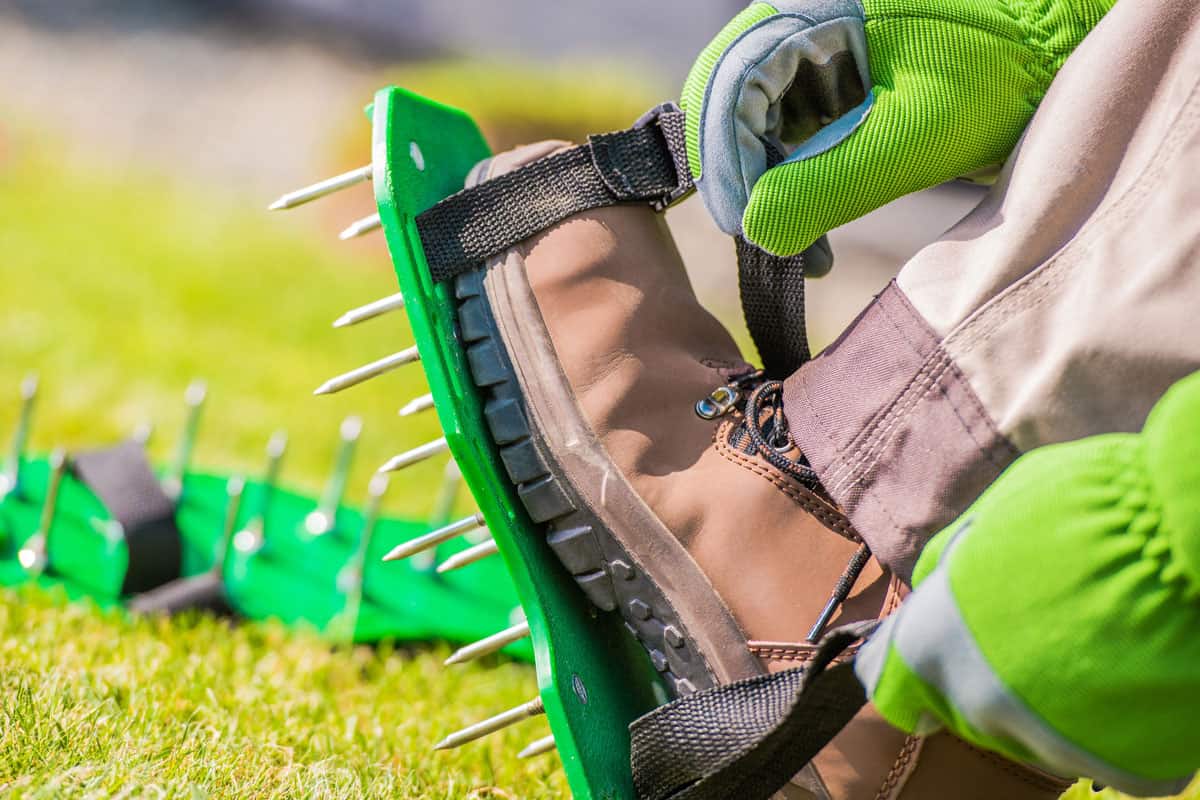 Aerator shoes are great for those who have small yards. While these can be effective, they also take some time to get used to. In addition, this method can cause soil compaction.

There are also aerators with a long handle that connects to the spikes at the bottom. The number of spikes and the height of the handle will vary depending on the brand you purchase.

This method of aeration can be more time-consuming for larger yards and may be better for small ones. However, there is less of a risk of compaction, and these tools are easier to use.

Finally, roller aerators are highly effective for both large and small yards. These tools have a roller with spikes that are connected to a handle.

These aerators come in a variety of sizes and depth levels to suit your needs. In addition, they are straightforward to use compared to other aerator methods.

It is possible for lawn aerators to kill moles. However, you would need to be looking for them moving and may still miss them because the spikes don't penetrate the soil enough. Lawn aerators can be effective at destroying existing tunnels and can help deter moles from returning.

Check out this post for some more information on garden pests: Does Bone Meal Attract Animals?