Taking care of your houseplants isn't always as easy as it seems. Do you have a venus flytrap that's turning red, and you have no idea what's causing this? Does a red venus flytrap mean something is wrong with your plant?

We'll answer all these questions and many others throughout this article.

When a venus flytrap turns red, it is getting enough sunlight. One of the easiest ways to tell if your flytrap is healthy and getting enough sun exposure is by checking the inside of its leaves/traps. If they're red, that means they like their current location.

On the other hand, if your venus flytrap has browning or wilted leaves, it's time to move it to a sunnier spot in your home or garden.

As we begin, we will cover all things venus flytraps and discuss how to keep yours healthy. We're here to assist if you're new to this species or have other related questions. With that said, let's dive right into this topic below! 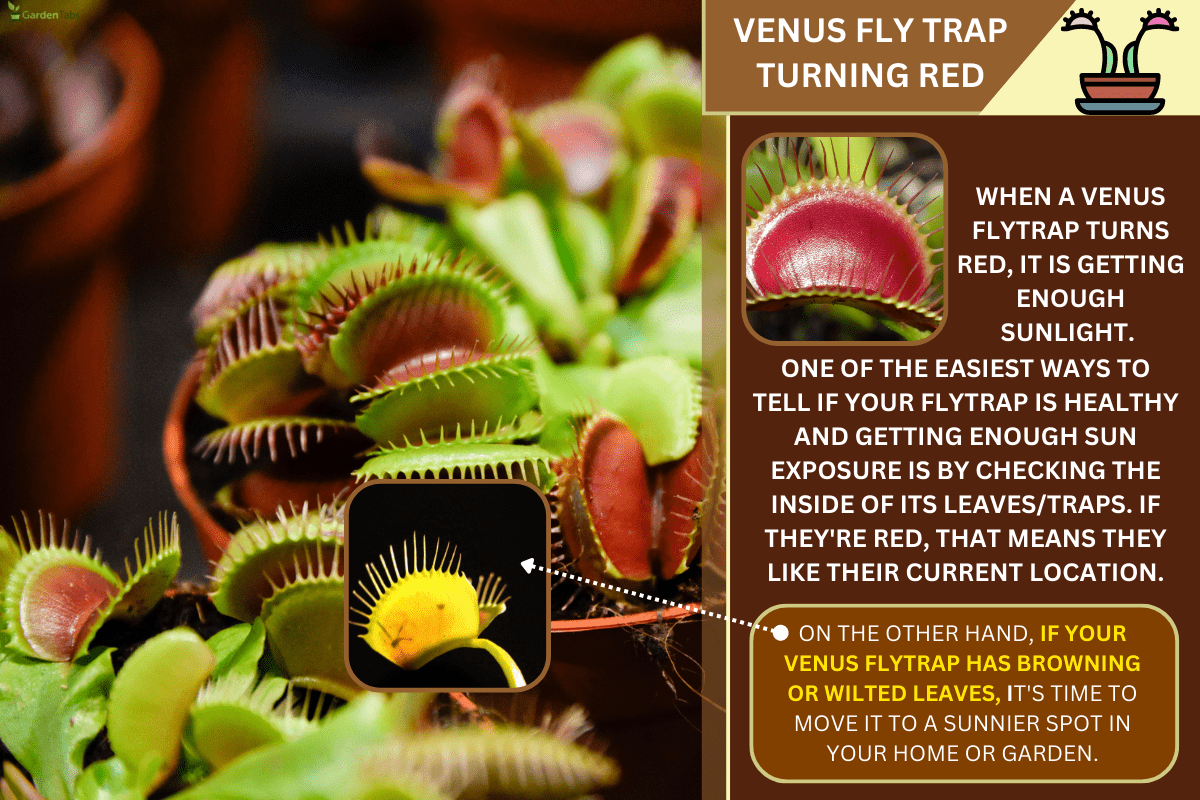 Is It Normal For A Venus Flytrap To Turn Red?

Yes! Although your venus flytrap turning red may alarm you, this is a good sign. Generally, when a venus flytrap becomes red, it is getting plenty of sunlight and is healthy.

You may notice the inside of your plant become a deep red color, indicating everything is going well and your current location provides enough sunlight. 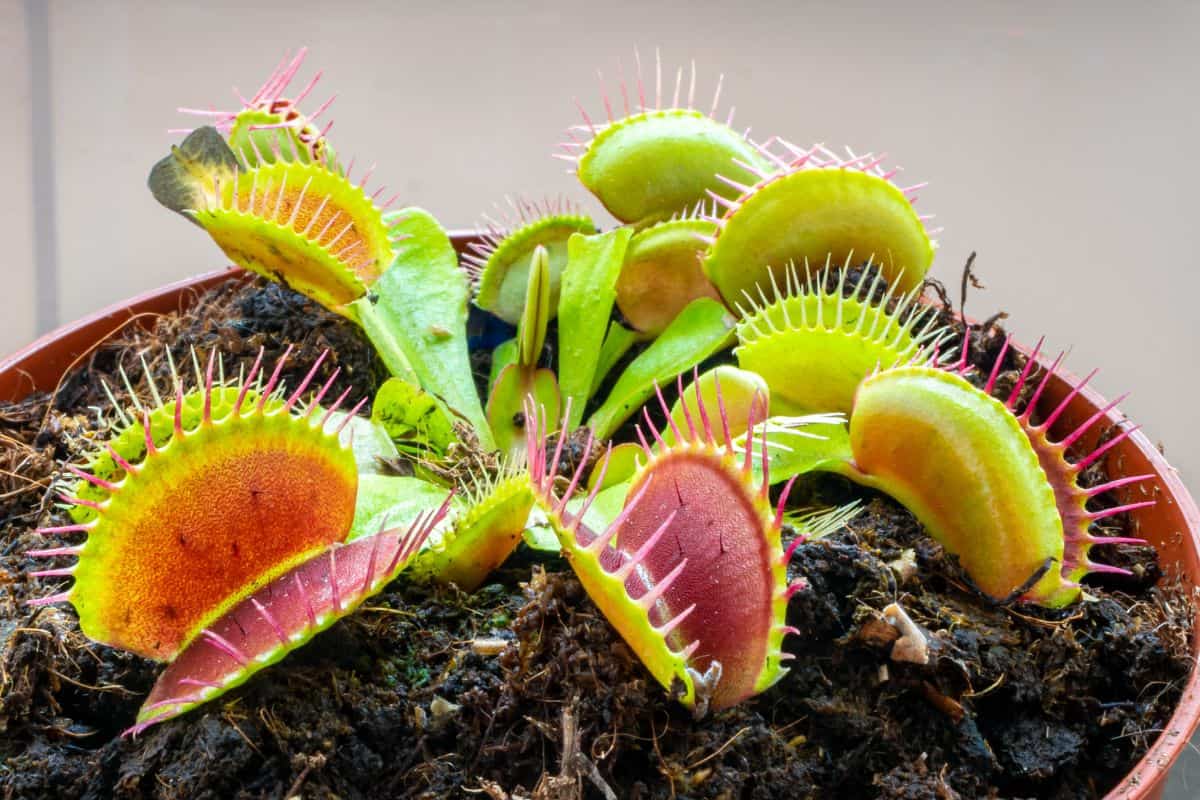 Since these plants already have a unique look, it's easy to mistake their red color change for a bad thing. In contrast, you should only start to worry if your venus flytrap turns yellow or brown and starts wilting.

Especially if your flytrap is inside, you want to pay close attention to its color and ensure it gets plenty of sun exposure each day.

What Color Should A Venus Flytrap Be?

Typically, a venus flytrap will stay green with regular sun exposure and good conditions. However, your plant may become red with bright light and develop a more vivid tone.

As we mentioned, ideal sun conditions cause a venus flytrap to turn red, which attracts more bugs to your plants. With these new visitors comes more food for your flytrap, which is great for many reasons.

The more flies/small bugs your venus flytrap eats, the more energy it has to grow.

According to the New York Botanical Garden, some venus flytrap varieties are also more prone to becoming red, which could explain why yours is much deeper colored than you expected.

These ultra-red varieties include:

Furthermore, a regular venus flytrap variety may also turn deep red with plenty of light, so this doesn't always come down to the exact "type" of plant you grow.

Regardless, if the flytrap is a rich red shade, that is a good sign.

Yes. If your venus flytrap goes from great sun exposure to very little, it can revert to a greener hue. Of course, this doesn't happen overnight, so you will notice a loss in color over a week or so.

If your venus flytrap turns green after being red, it needs more sun. So if you moved yours to a different room with less light or pulled down the curtains/blinds, you might want to return to the placement you had before.

The key to growing healthy venus flytraps is keeping them warm and exposed to sunshine. Without bright light, it's more likely your plant will become sick and die, so this can be serious.

It's also worth mentioning that when a venus flytrap doesn't receive enough light, you'll notice it is leggier and has the same green color from its base to its traps.

Although this isn't necessarily bad, it isn't as good as red traps and brighter sunlight.

What If The Base Of My Venus Flytrap Is Red?

If the base of your venus flytrap turns red, it could be sick or sunburnt. Although your plant will enjoy full sun, you don't want it sitting in a place where the temperature exceeds 90-95 degrees for more than a few hours.

When a venus flytrap becomes burned, you might notice red spots along its base, which is an easy indicator that something is wrong.

If this happens to your plant, we recommend moving it out of the sun for a few days to let it settle and heal. Luckily, venus flytraps are pretty resilient, so yours shouldn't die because of a sunburn.

However, if your plant becomes brown from its base or you leave it in the sun with a burn already, this is when more serious issues will arise.

Again, this shouldn't be a major concern if your home has dappled shade or brighter sun in the morning.

How Much Sun Does A Venus Flytrap Need?

Giving your venus flytrap six hours of full sun each day is usually best. As we said, this plant prefers bright, direct light and does better in those conditions.

In addition, having your flytrap in a spot that gets closer to six hours of daily sun will ensure it keeps its red color and stays healthy for the future.

However, The Great Outdoors Nursery claims that a venus flytrap can still be productive and grow in four hours of direct daily sunlight, so that's important to know.

Unfortunately, not every window will be super bright for six hours or more each day. 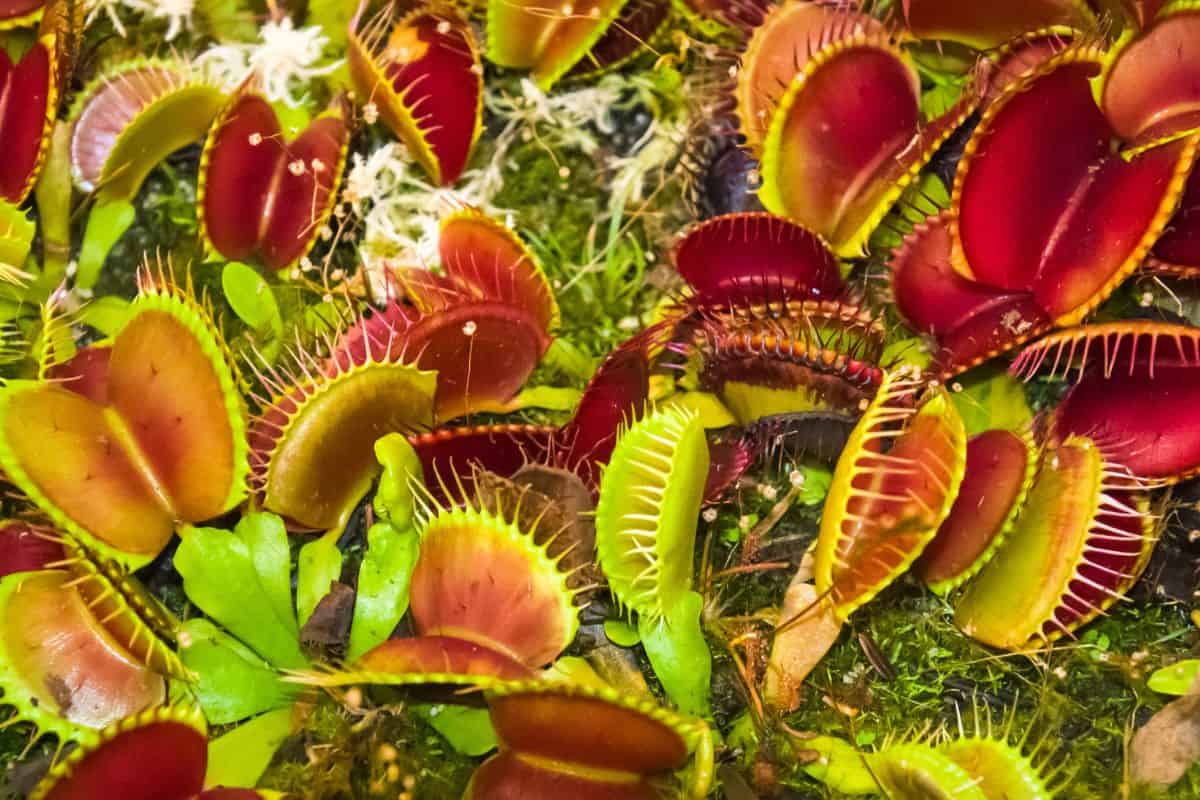 Suppose your home faces away from the sun, or you have many trees. That could become a problem for the plants growing inside, so you may need to invest in a plant light.

Luckily, you should be able to see your venus flytraps catch prey and mature under UV/LED lighting, so you don't have to always depend on the sun.

One thing with that, though, is without bright sun, your flytrap won't likely turn deep red.

This indoor plant light features red and blue spectrum lighting, has a four, eight, and 12-hour timer, three switch modes, has a gooseneck design, can be adjusted from 15" to 63", and features four heads for various-sized plants.

What Are The Signs Of A Dying Venus Flytrap? 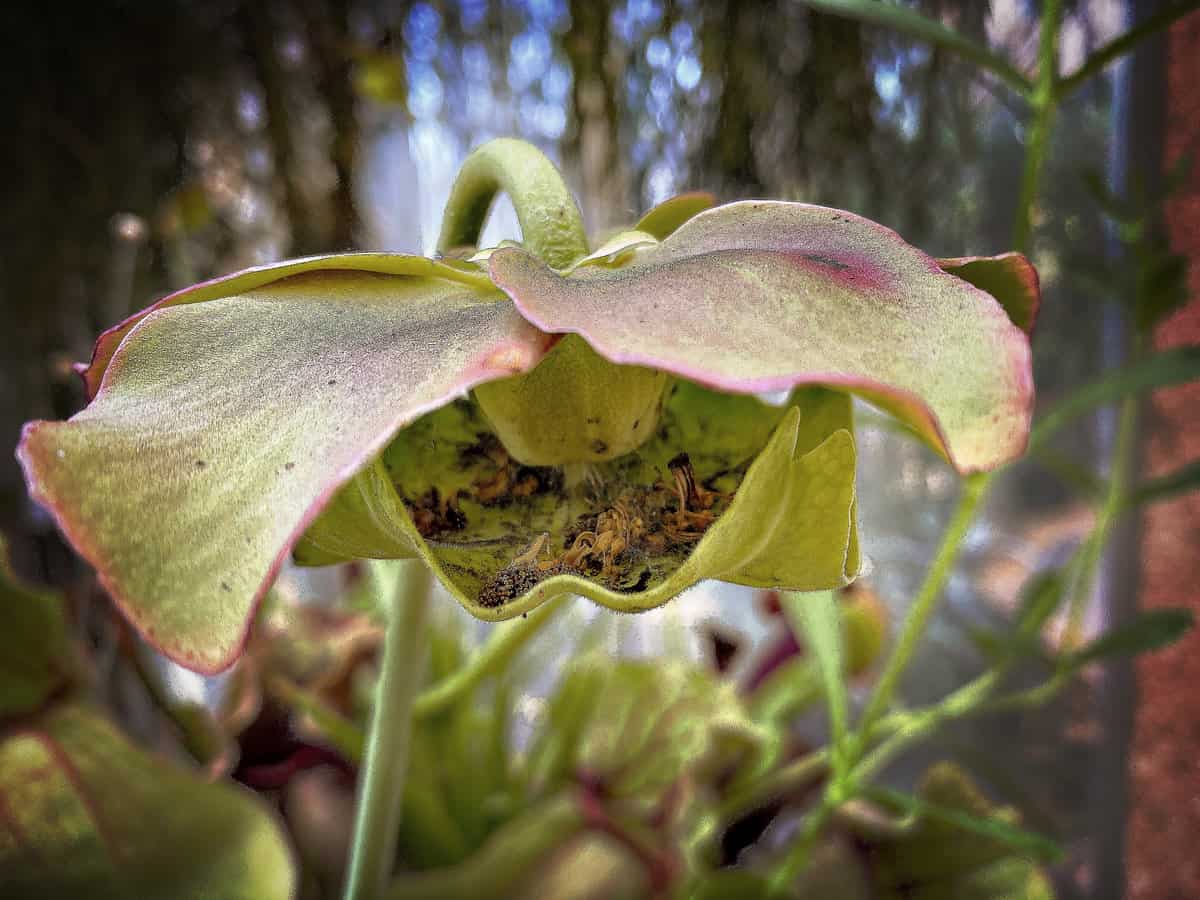 For anyone with a sick or dying venus flytrap, there are a few warning signs to be wary of. Generally, when a venus flytrap becomes ill, it will change color.

Your plant may turn brown or yellow before it dies. This discoloration means your plant either has too little sunlight, too much water, not enough water, or too much sun exposure.

Most of the time, venus flytraps will die because of too much moisture in their soil. As we covered, your plant does well with full sun, so it won't be as common for one to become severely sunburned.

Therefore, it's essential to plant a venus flytrap somewhere with excellent drainage so waterlogging and root rot don't occur. Even if it's hot out, don't drown a venus flytrap.

According to SarraCenia, a venus flytrap also will lose its leaves when it starts to die. Moreover, your plant's base will become mushy, and the ground will feel super wet if it's a water issue.

Regardless, if you keep a close eye on your flytrap, you should be able to notice these warning signs and take swift action to keep your plant alive.

How Do I Bring A Dying Venus Flytrap Back To Life?

If your venus flytrap becomes sick and starts to die, there are ways to bring it back to life. First, you need to determine "what" caused your plant to die.

Our first culprit is overwatering, so we recommend feeling around the base of your flytrap to see if there's too much moisture. If that's the case, don't water your plant for a week or until the soil dries.

You also want to ensure your plant receives enough sun during this time. Without sunlight, the water will sit in its pot and drown its roots.

In contrast, if your venus flytrap isn't getting enough water, you need to create a watering schedule (ideally 1-2 times weekly, depending on its sun exposure).

And finally, if your venus flytrap is sunburnt, we recommend bringing it away from the window and letting it heal for a few days. Closely monitor the color of your plant's base and leaves.

Are Venus Flytraps Easy To Grow? 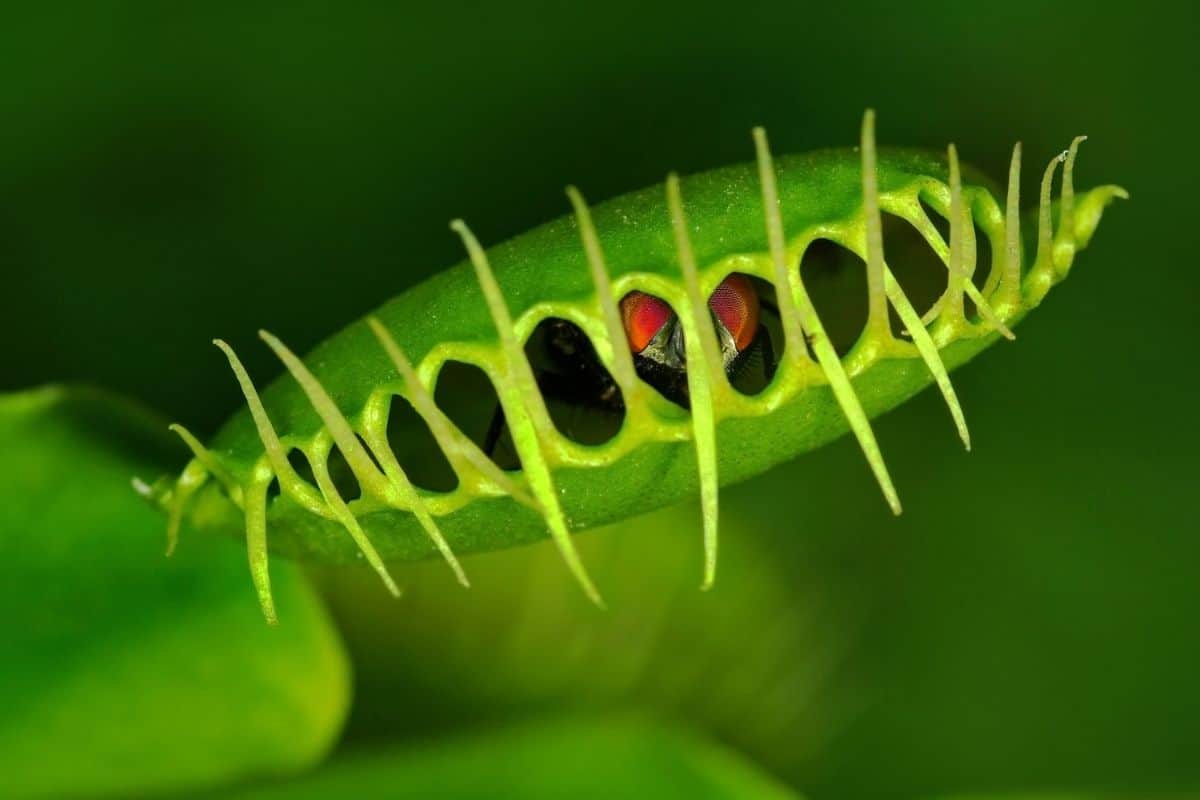 Overall, growing a venus flytrap should be pretty simple. As long as you give your plant enough sunlight, water, and soil with drainage, it should mature and even become a stunning red shade.

That said, not every flytrap is the same. Some may require six hours of sunlight to get bigger, while others may do fine with four.

You also want to try and keep a venus flytrap warm, as this species isn't fond of colder climates. For example, if you're in Florida, you might be able to keep your flytrap outdoors throughout the year.

On the other hand, someone in Michigan or New York won't have that same luxury.

Whether you have a venus flytrap in your home or want to grow one, it's essential to understand how they grow. From what we found, a venus flytrap will become red if it's getting plenty of sunlight.

Furthermore, a red venus flytrap indicates your plant is healthy, which is a great sign. Again, you don't always need your flytrap to be scarlet, but make sure to move it somewhere with sunlight for 4-6 hours.

Regardless, remember not to overwater your venus flytrap, and have fun watching it catch prey!

Made it to the end? Check out these helpful related articles below:

Venus Flytrap: When To Repot And How To (Tips For Transplanting Success)

Do Venus Flytraps Eat Mosquitos, Flies, And Gnats? [Are They Good For Pest Control In And Around Your Home?