Weeping cherry trees are known for their iconic weeping look that adds a different scene to your landscape. But what if your weeping cherry tree doesn't take on a weeping form? Is there something wrong with it? We did the research and found out why.

But there's more to it than that. If you want to know whether you have a naturally grown cherry tree or not, read on.

Why Is My Weeping Cherry Tree Growing Straight Up?

Grafting works by sawing off the tree's base 4 to 5 feet from the ground. Once the trunk has been sawed off, the trunk should be slightly split into two in order for the scion to be pushed inside the crevice.

The scion is a branch from a donor tree, a mature and healthy weeping tree that takes on a weeping look. By grafting, the main tree will take on the shape of the donor tree. 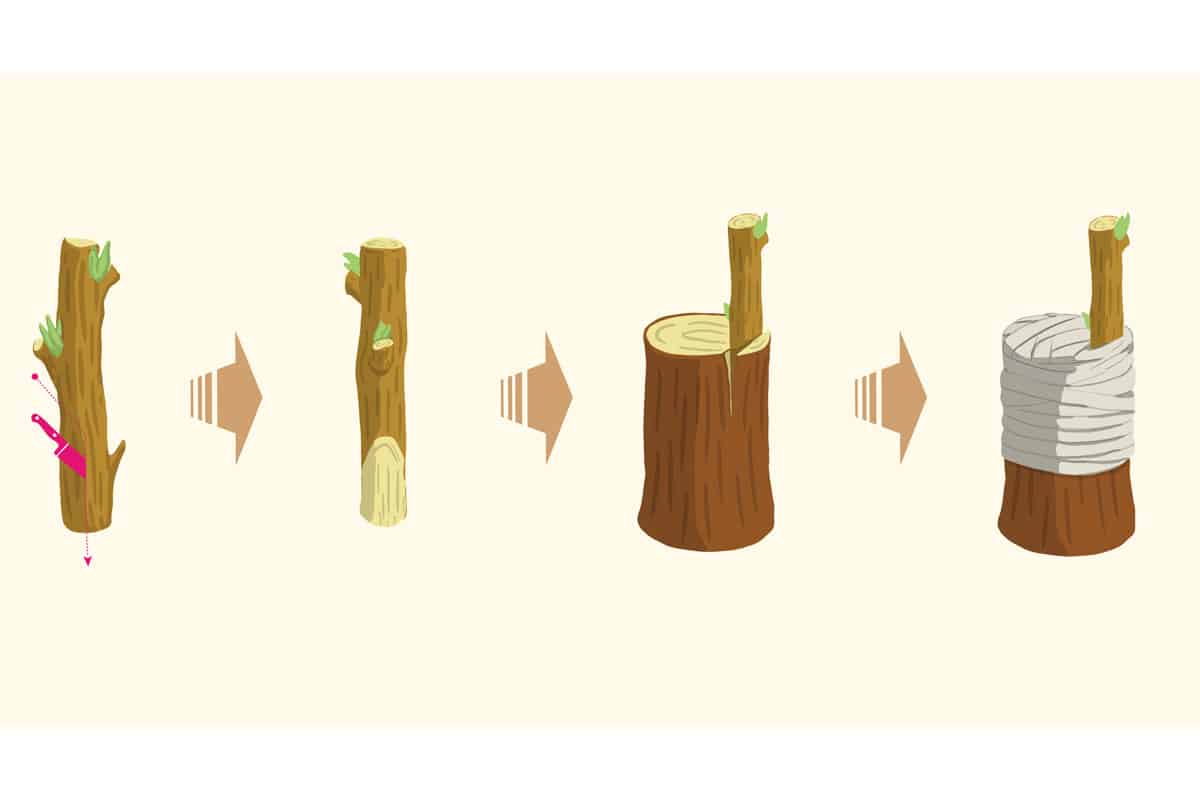 That being said, a naturally grown weeping cherry tree will not have the same properties as a grafted one. Which is why your tree is growing straight up. Another reason could be that your tree has been poorly grafted, so it did not take a weeping form.

Look for a graft knot on the trunk to identify whether your tree has been grafted. This graft knot should be protruding and swelling. If you see a graft knot on your tree, but it's growing upright, this could be because it has been poorly grafted.

This case takes on a whole different subject. If you noticed that your weeping cherry tree is no longer weeping in comparison to last year's spring, this could be the effect of grafting.

As mentioned, most weeping cherry trees have been grafted to weep. They are the byproduct of mutation. The possible reason why your weeping cherry tree stopped weeping is that it's growing another set of branches or stems, also called suckers.

Suckers are little branches that grow below the graft or the swelling part of the tree. Suckers happen when two or three trees have been grafted together. Usually, a strange-looking branch will grow from the bottom of the tree because of stress. The blossoms may look healthy, but the trunk could be stressed. Yes, it can happen.

It can happen when the rootstock wants to revert to its original form, not its mutated form.

When the rootstock is under any stress, it will grow off another stem to try to fight it off. Suckers may grow fruit or blossom of their own and have a different color and bark texture, but when you see one poking out of your cherry tree, immediately remove it from the root to prevent the upright growth of your tree.

Another reason why your weeping cherry tree has stopped weeping could be because of improper pruning. If you have a naturally grown tree [check if it doesn't have a break or swelling below the crown], you shouldn't prune its branches that are growing upright. Just let them be.

When you prune the branches off of a naturally growing cherry tree, it will eventually lose its weeping shape [if it already has a weeping figure in the first place].

Can You Still Fix A Weeping Cherry Tree That Grows Upright? 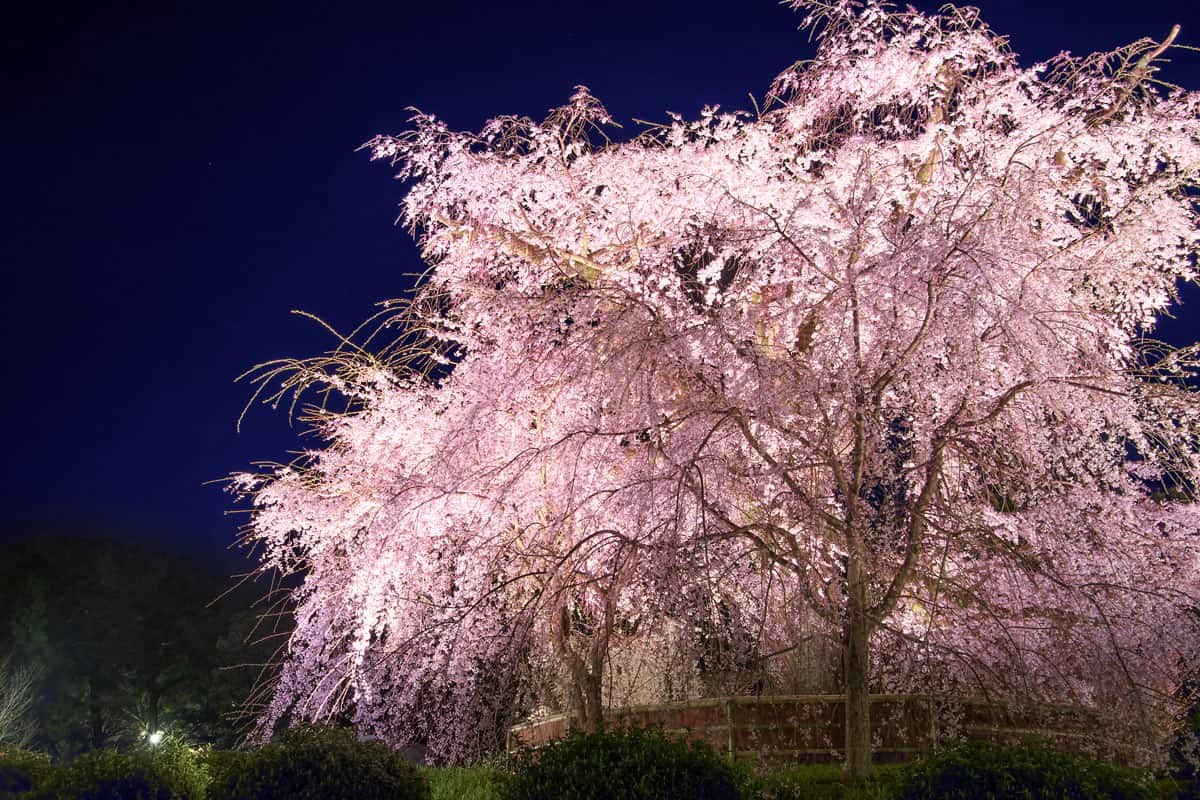 If your tree has been grafted yet it still grows upright, it could be because you didn't prune them the right way. For example, when the tree begins to grow branches, you should inspect whether it grows upright or downward. An upright-growing branch should be cut off immediately before it becomes a dominant part of the tree.

The base of the tree, or the host tree, is trying to grow its own branches. If there are far too many straight branches, there's no other way to fix this. But if you want a weeping cherry tree that doesn't grow upright, you must purchase a new one.

How To Take Care Of Weeping Cherry Trees

It's essential to keep weeping cherry trees hydrated. Preferably, keep the soil moist and do not let it dry out. During the summer, water them deeply. Water the tree slowly to make sure that each drop is absorbed without drowning the tree.

Adding some organic mulch and fertilizer will help your weeping cherry tree grow healthy. Add a layer of organic mulch around the tree's base during spring.

Check out this organic mulch on Amazon.

As mentioned, weeping cherry trees can grow in warm and cold weather. The Higan cherry tree, a common cultivar, grows well in USDA zones 4-8. It is recommended to grow them at temperatures above -20 degrees Fahrenheit.

Preferably, allow your trees to have at least 8 hours of sun exposure daily and nothing more. Protect your weeping cherry trees from extreme sun exposure using a sun shade.

Get Rid Of Pest and Diseases

Make it a habit to check your tree for any infestation. Weeping cherry trees are prone to pest and disease infestation. If you don't get rid of them, your cherry tree might die.

Inspect the leaves, branches, roots, and trunk for beetles, caterpillars, and other bugs. Any flower or branch that has been infected should be cut off immediately to stop the spread.

Overhydrating your tree can also cause fungal infections. It can attract powdery mildew that starts as a minor issue but could destroy your tree for good. Avoid watering the leaves and branches to avoid fungal growth.

To prevent your tree from dying, read this helpful post, "Why Is My Weeping Cherry Tree Dying? [And What To Do]," to learn more.

How To Prune A Natural Weeping Cherry 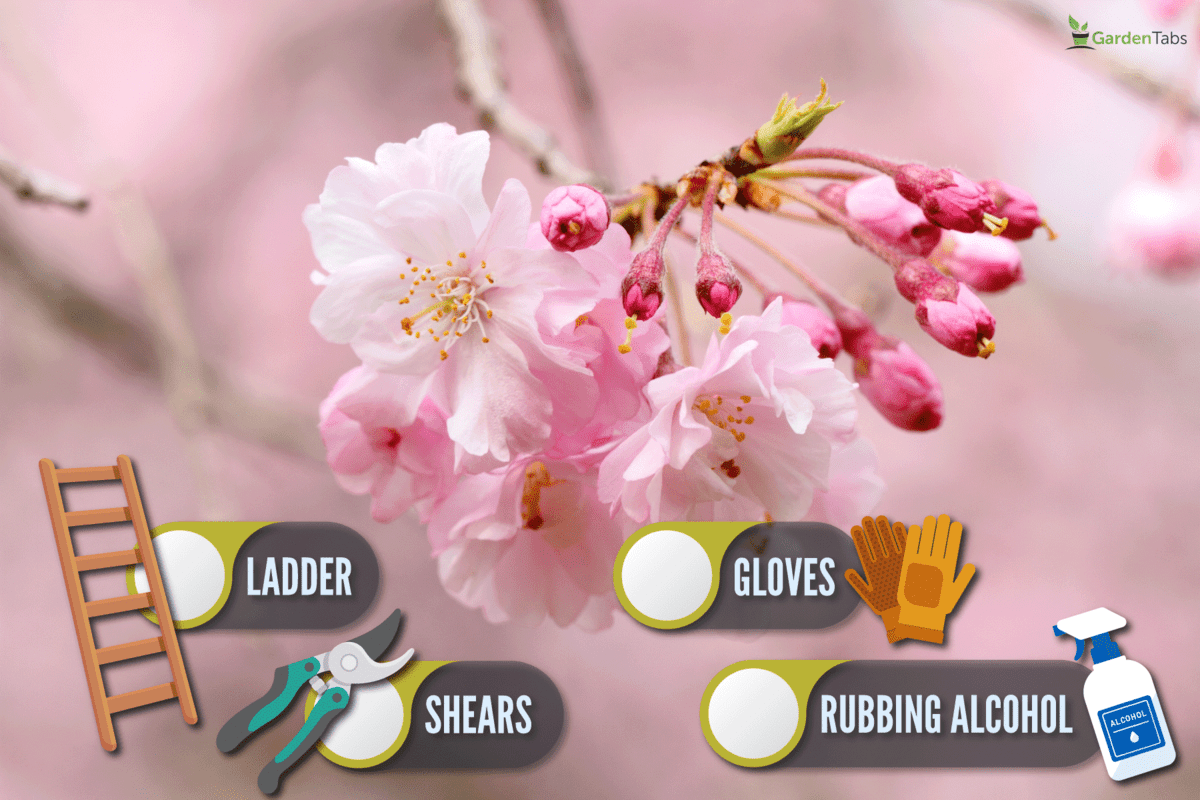 Pruning a natural weeping cherry is a different process compared to grafted ones. To prune them the right way, you will need the following materials:

1. Rub the tools with rubbing alcohol 2. Trim the branches that sweep the ground. Trim them at least 6 inches from the ground. 3. Cut any damaged or broken branches. 4. Do not cut upright growing branches. Chances are, these branches will grow and weep naturally if you give them more time. 5. Cut branches that rub each other at least two inches apart. Cut the thinner of the two. 6. Lightly trim the tree according to the desired shape. 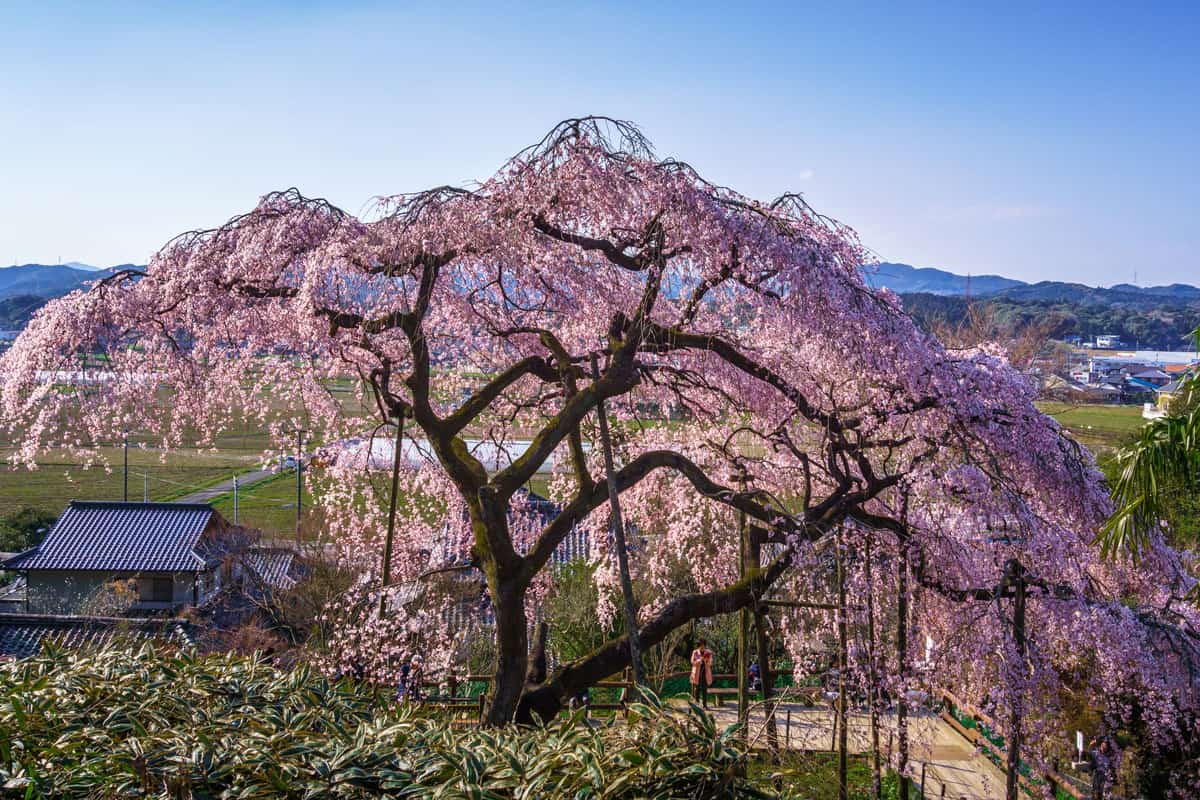 However, inspect the branches now and then to look for any infection or rot. Damp soil can cause the branches to spread rot. If this happens, trim the branches with pruning shears. 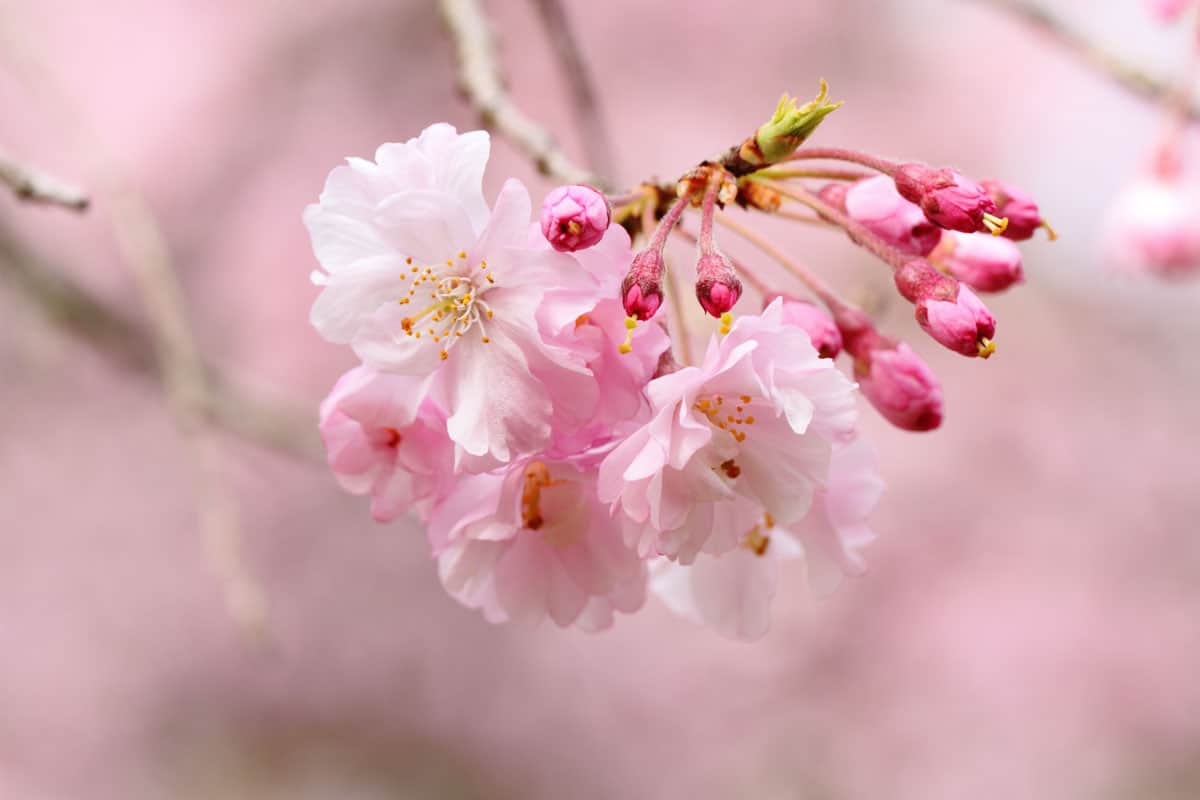 Weeping cherry trees are primarily the result of mutation. And it's definitely okay to have one that doesn't take weeping form! What's important is that it's healthy and beautiful!

It's also important to note that grafted cherries should not grow upright branches. If they do, immediately cut them off. If there are way too many upright branches, it's too late to fix them.

But if you want the weeping form, you could purchase a new tree.