The following are possible reasons why your night blooming cereus plant is dying: 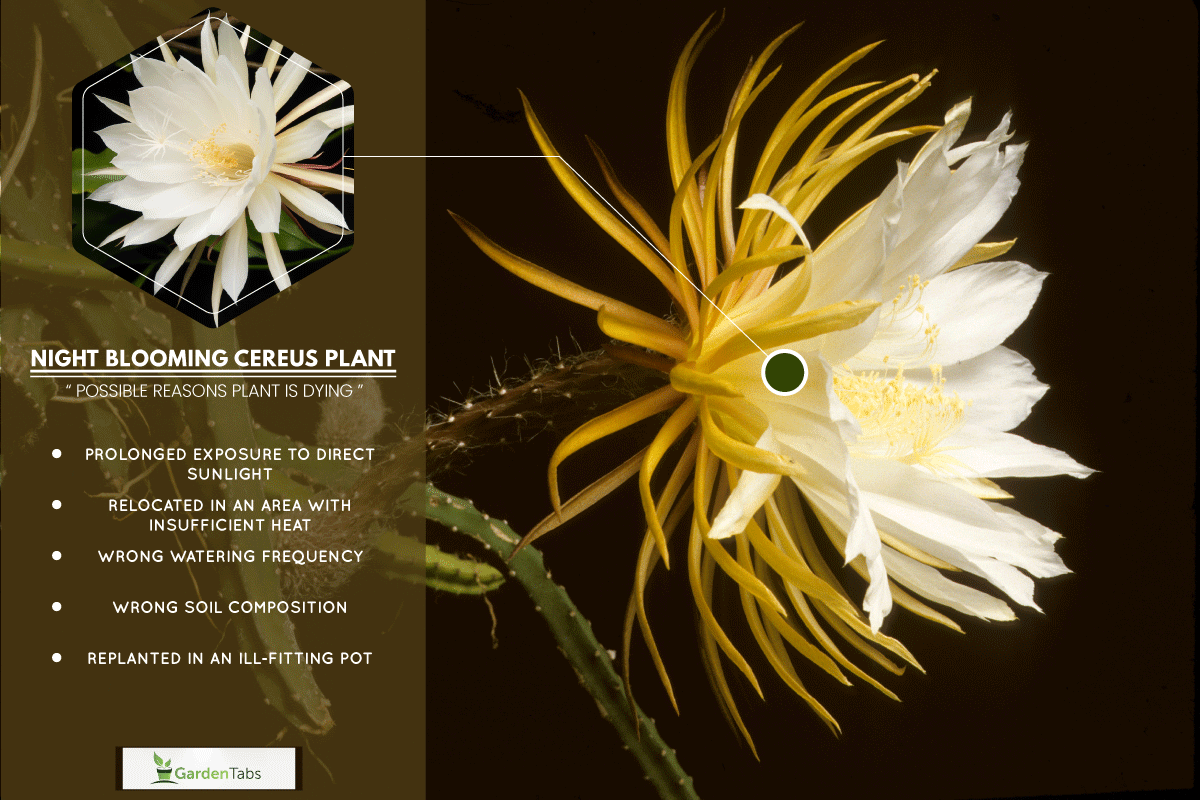 What Can Cause A Night Blooming Cereus To Die?

Night blooming cereus, also known as the Queen of the Night or Dutchman's pipe, is sometimes referred to as an orchid cactus, although it is not at all an orchid but only a cactus.

One of the reasons why the plant is referred to as an orchid is because it is an epiphytic plant, which, much like orchids, thrives on other organic surfaces and is often suspended above the ground.

While cacti are stereotypically known as plants that can survive prolonged exposure to harsh sunlight, this is not the case with one night-blooming cereus.

The species of night-blooming cereus called Epiphyllum oxypetalum is a forest cactus that typically clings to tree branches to protect itself from direct sunlight and avoid the water-saturated soil of a rainforest.

Giving this plant adverse opposite living conditions compared to its natural habitat will cause it to wilt or die. 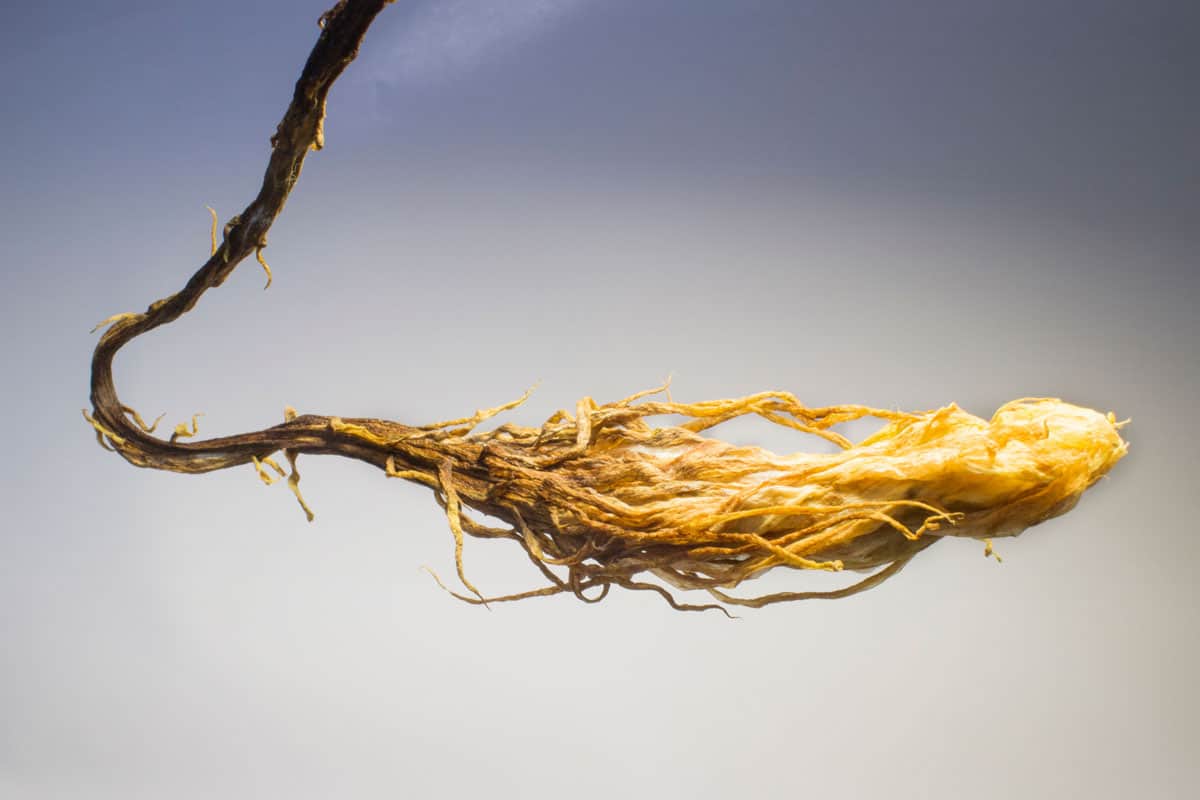 Night-blooming cereus plants can get damaged when exposed to direct sunlight for too long. If you have been allowing the plant to sit out in the direct sun, especially during hot midday to afternoon sun, this will cause serious injury to its stems and cause it to die.

In fact, even partial sun is discouraged for this type of plant, and if necessary, do not leave it out for too long until the soil dries out completely.

To prevent a night-blooming cereus from dying due to overexposure to direct sunlight, keep it in a partially shaded area where it can receive softer sunlight.

It is best to be placed near a bigger tree, or a wall so that it can get enough warmth without being scorched. If you prefer to give the plant direct sunlight, move it outside during early mornings or place it on an outdoor porch.

If you want to adjust a night-blooming cereus to intense sunlight, do it only to a growing plant and not to one that had already developed the habit of living in partially shaded areas.

To increase a young night blooming cereus plant's tolerance to direct sunlight, gradually raise the number of hours it spends outside in the morning.

Relocated In An Area With Insufficient Heat

While too much direct sunlight can damage the night-blooming cereus, too little of it can also have negative effects. Just as we discussed above, the plant requires soft sunlight to emulate the sunlight it receives under the canopy of a rainforest.

You can provide the same conditions by allowing the plant to clamber around taller trees in your garden or keeping it inside as a houseplant.

If you have the plant indoors, place it in an area with enough sunlight. You can choose to move it to a southern-facing window or whichever warm room in the house as long as it is away from any air vents.

Night blooming cereus is a tropical plant, so you must see to it that your home maintains an average nighttime temperature of no less than 55-70°F 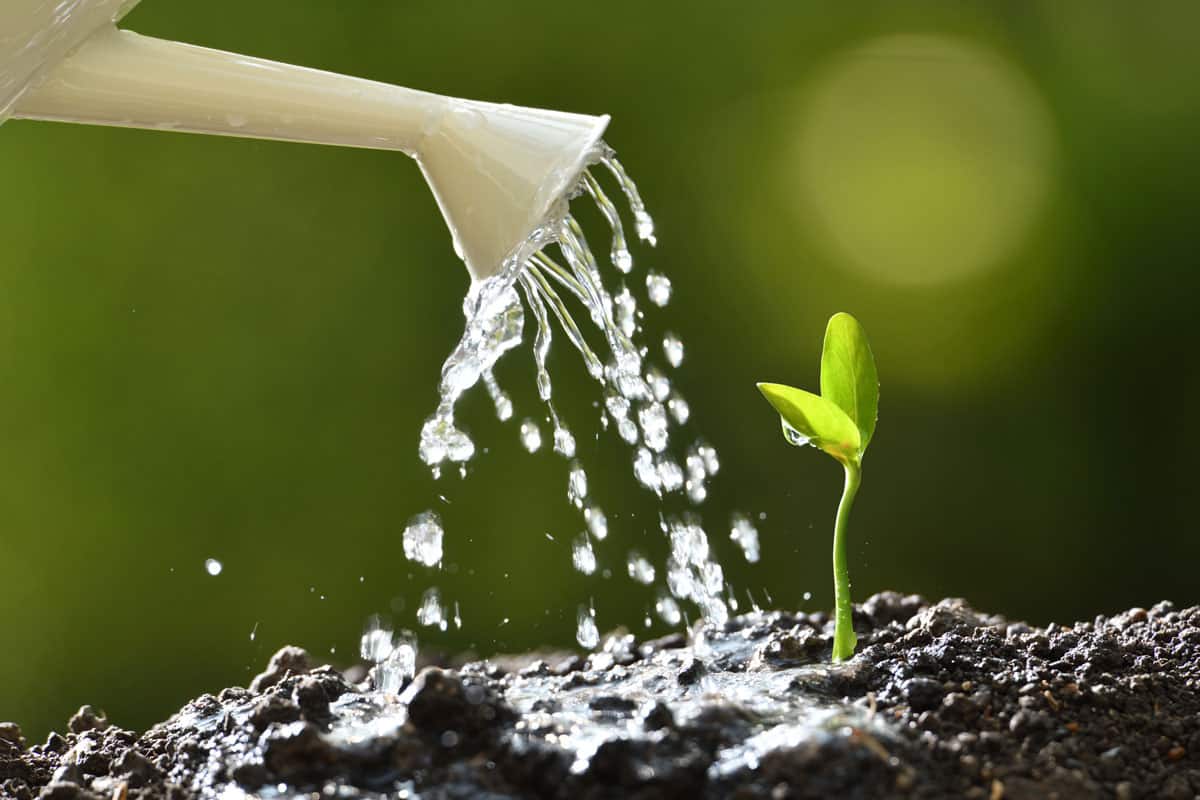 The wrong watering frequency can cause your plant to wither or die. Still, it can be tricky to determine if you have been overwatering or underwatering because symptoms appear virtually similar.

If the plant already appears wilted and had little to no growth, recall the number of times you have been watering the plant.

As a cactus, a night-blooming cereus plant does not need a lot of water. However, some species of this plant have modified flat stems that significantly change their physical appearance from common cactuses, causing some owners to overwater.

Water the plant only once every one to two weeks. If you live in regions that experience freezing winter seasons, completely stop watering the plant from fall until spring and wait for temperatures to return to an average temperature of no less than 35°F.

The average watering frequency for a night-blooming cereus might be once every week, but this can still depend on your location. If you live in a tropical region, then the humidity in the atmosphere can contribute to overwatering.

On the other hand, residing in a dry area where your plant requires more moisture can cause underwatering, malnutrition, dried-out roots, and eventually death.

Night-blooming cereus benefits well from well-draining, breathable soils with packed nutrients. The density of your soil is also an important factor that can affect the results of your watering frequency.

Since the plant needs enough space between sediments in the soil for water drainage, placing it in a compact soil composition will negatively affect the roots.

The appropriate mixture of sandy loam soils can work best for a night-blooming cereus. This type of soil provides enough essential plant nutrients from the clay but is still well-draining due to the sand included in the mixture.

If this type of soil is not available to you, you can choose to mix a normal garden potting mix with some sand instead.

Replanted In An Ill-Fitting Pot

Similar to most cactuses, a night-blooming cereus prefers to be root bound. This means that the plant likes to grow its roots in a compact, dense formation to not allow too much horizontal root expansion.

Frequently changing the pot a night-blooming cereus had matured in is not recommended. If the soil needs to be replaced, make sure to return the plant to its original pot where the roots have grown accustomed.

However, in the situation where the pot really needs to be replaced, it is best to look for a container with a similar shape and depth to allow the roots to be snug.

It is important to note that this does not suggest that you never repot the plant. See to it that you change the pot every 3-4 years, but choose a one or two sizes bigger replacement.

Repotting will give the plant replenished soil, reduce the chances of pest and bacteria accumulation, and provide additional space for root growth.

How Do I Get My Night Blooming Cereus To Bloom? 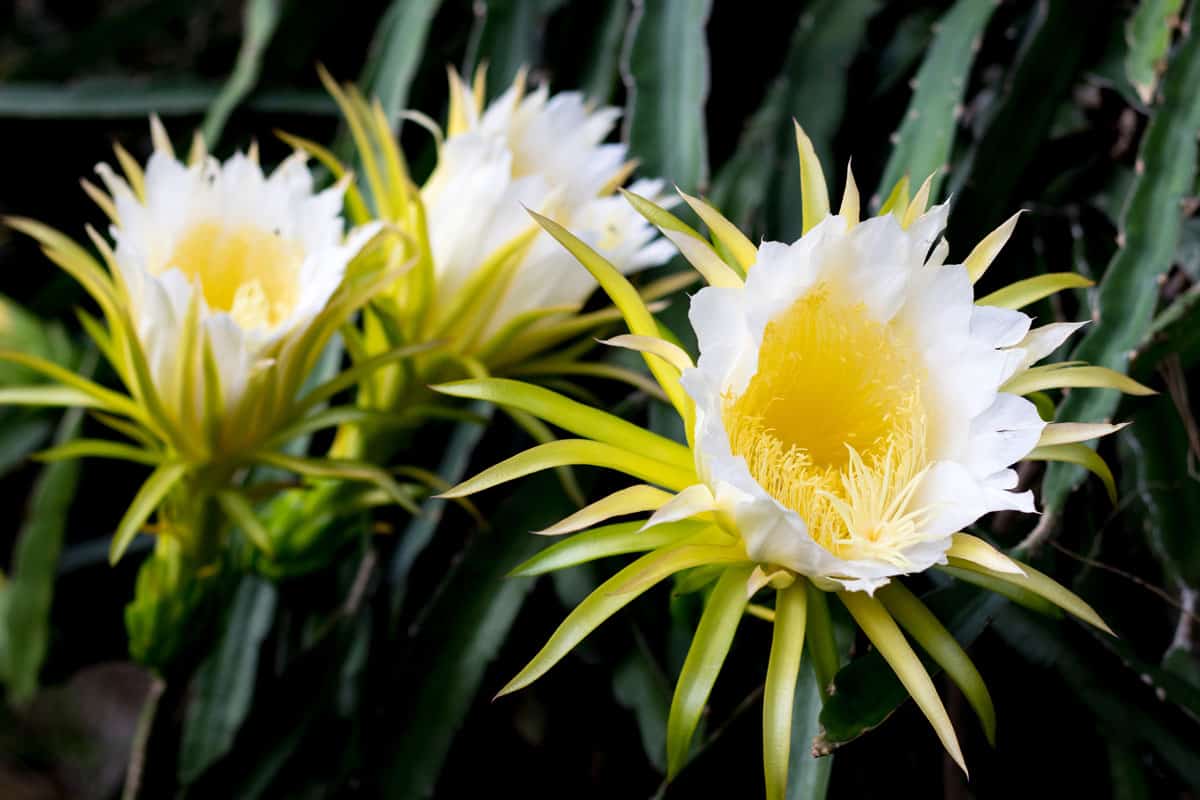 Proper sunlight encourages a night-blooming cereus to bloom. As we discussed before, direct sunlight can harm the plant, but not enough will deprive the plant of the energy it needs to produce the nutrients it needs. A weakened immune system will affect the plant's ability to bloom flowers and propagate.

Aside from providing sufficient sunlight, you can also choose to stimulate growth by giving your plant organic fertilizers. Pruning can also encourage the stems to grow buds and bloom its famous fragrant, white flowers.

It is important to note that young plants below three years of age are unable to produce flowers yet. So if you choose to propagate your plant from seed instead of a cutting, the wait for a flower to bloom can take five to seven years, and sometimes even as long as a decade.

What Time Does A Night-Blooming Cereus Flower Bloom? 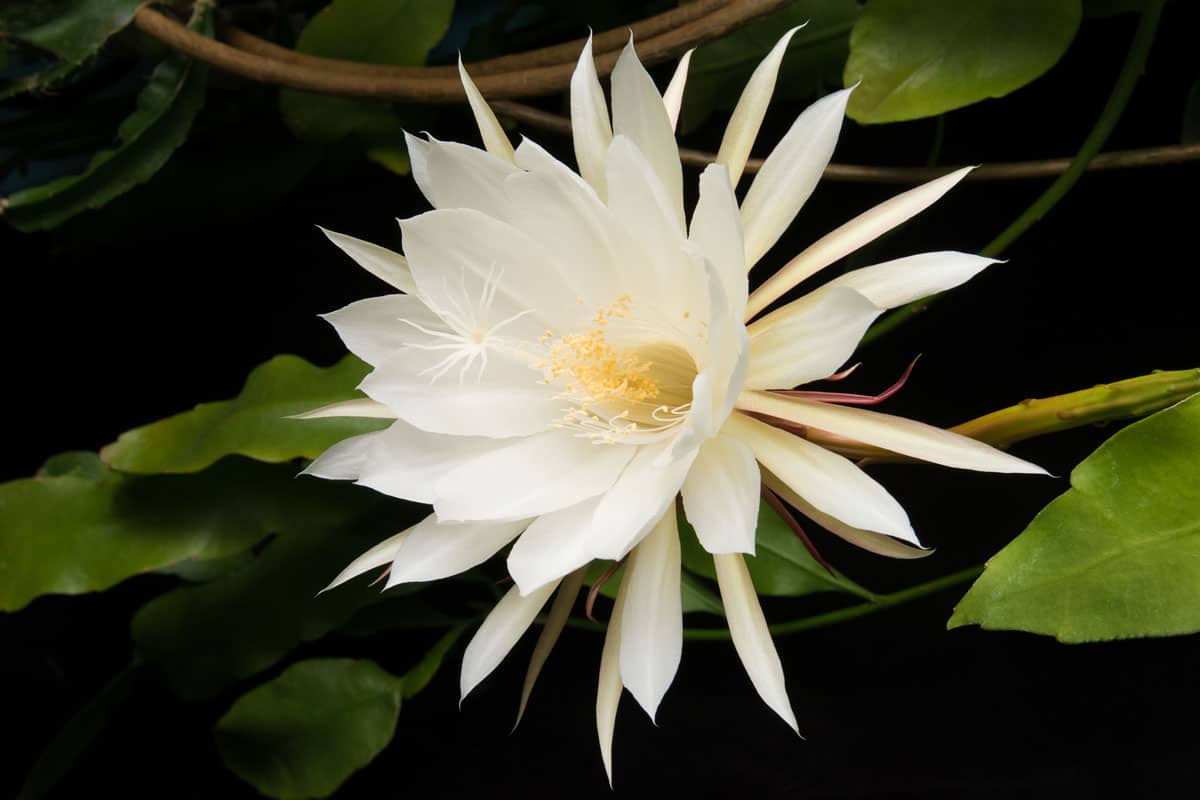 Not all night-blooming cereus plants bloom yearly, but the ones that do usually prepare to bloom around spring and from May to June. Once temperatures are warmer, the plant will produce buds at the ends of their modified stems.

If a bud is present in your plant, you can start to observe it daily until the bud reaches roughly about the same size as your palm. When the bud starts to bend downwards, you can start being vigilant for a blossom.

The night-blooming cereus can start to bloom around 9 PM and wither down at dawn. The flower usually has bright white petals with a yellowish or red tinge on the sepals, which are the modified leaves that encapsulates the bud before blooming. 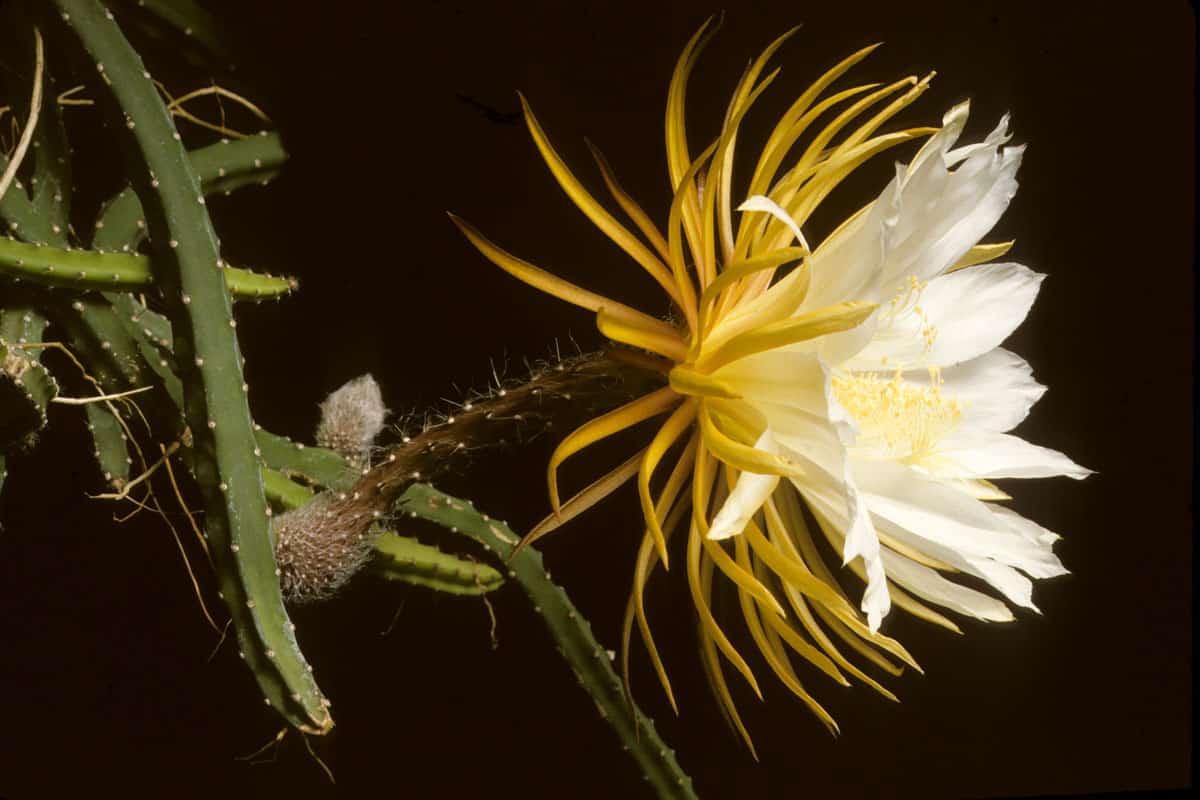 Night-blooming cereuses are beautiful plants that can be easy to maintain as long as they are provided with their essential living conditions. However, prolonged exposure to sunlight, overwatering, and other common cactus maintenance missteps can kill the plant.

In this article, we discussed the possible reasons why a night-blooming cereus is dying, as well as the remedies you can try in order to save the plant. Make sure to follow the appropriate solution so that you can keep enjoying their beautiful blooms for many more years.

Made it to the end? Check out some of our other related posts!

68 Cactus Landscaping Ideas That Will Inspire You

11 Types Of Echeveria You Should Consider For Your Succulent Garden