All plants require different growth and care requirements that need to be met for them to properly thrive and develop. Moon cacti have specific water, light, soil, and temperature demands. But what happens when you notice that it's starting to die? We've done the research to bring you the answer.

The primary reasons why your moon cactus is dying are due to the following:

Watering the plant properly, inspecting for any signs of root disease or infestation, and cutting the scion are the various ways you can save your plant.

In this article, we aim to inform you the reasons why your moon cactus may wilt and die, the various ways you can save the plant, and the proper growth and care requirements. If you want to find out more, continue reading! 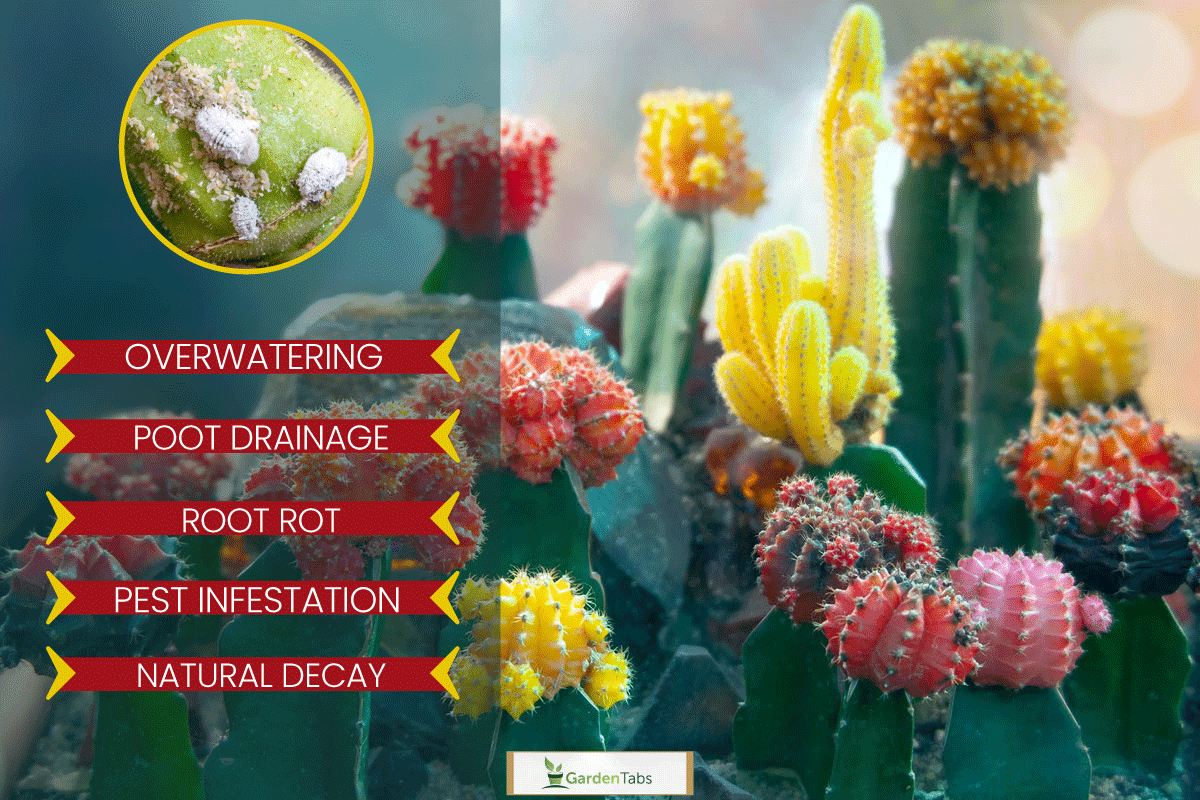 Moon cactus is a hybrid or grafted plant that is composed of two cacti species—Gymnocalycium Mihanovichii (Chin Cactus) and Hylocereus Undatus (Dragon Fruit).

Chin cactus is a native of Paraguay and can be found in various regions of South America. This plant variety is quite colorful, but it does not contain any chlorophyll, which is essential for the process of photosynthesis. Due to the lack of chlorophyll, the succulent itself cannot provide its own food. It needs a host in order for it to thrive.

Dragon fruit is a vine-like cactus used as a crop. It is an invasive species that climbs through structures using its aerial roots. During late spring and early summer, large white flowers appear that usually last for a night.

Apart from this, the term generally implies that it yields dragon fruit. Because of its strength and high tolerance to various conditions, it is the most suitable host for chin cacti. 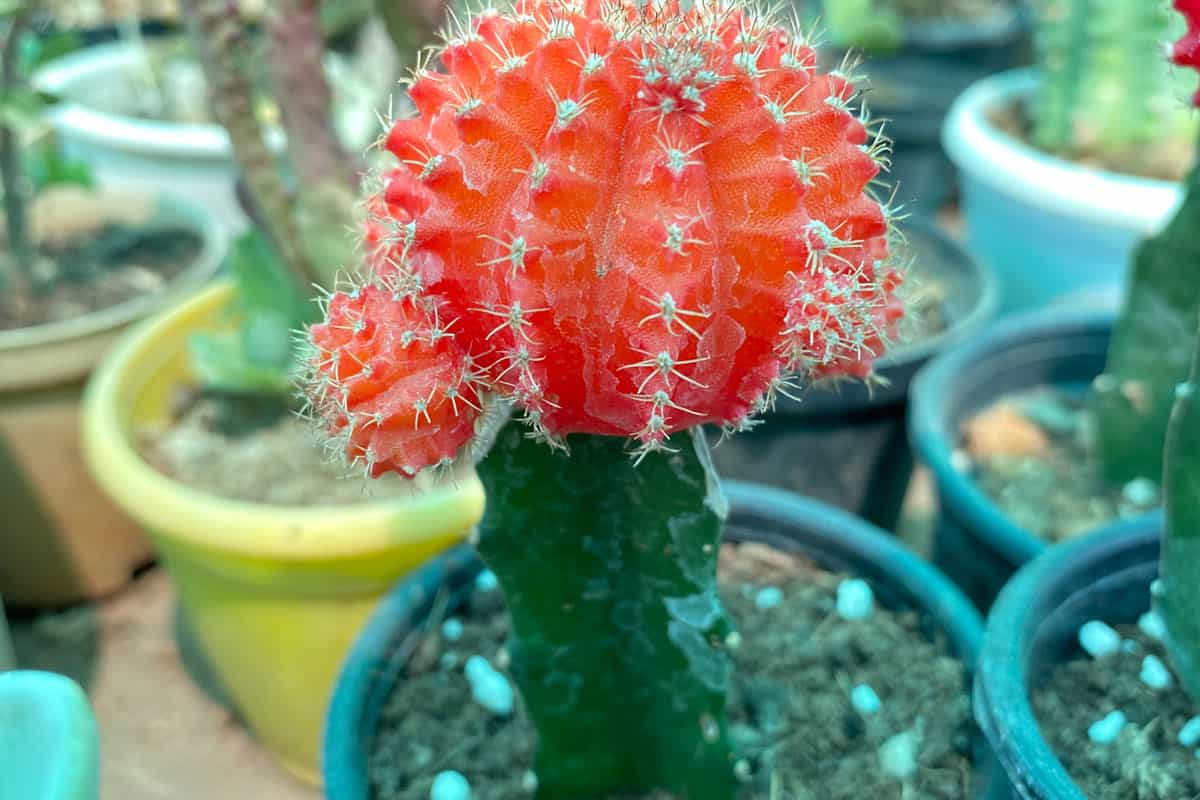 Primary Reasons Why Your Moon Cactus Is Dying

When it rains, cacti have a thick hard-walled stem where they can store water. Since they are designed this way, large species can last months without being watered while small varieties like moon cactus can last weeks.

Overwatering is the major cause of wilting and dying. Yellowing of the rootstock is a sign. It seems like you are watering your plant even though the soil is still moist and wet. In most cases, the topmost layer may look dry, but underneath it, the soil is not.

Dip your fingers at least 2 inches into the potting mix to check if the soil is completely dry or not. Water you plant immediately. Do not let it sit completely dry for too long because it might have already consumed all the stored water inside its stem.

In their natural habitat, cacti generally thrive in a porous sandy soil that has permeable soil and plenty of aeration. Improper drainage is most likely the effect of using a poor draining soil and pot. Moon cacti do not want to sit in wet soggy soil for too long.

You can make your own potting mix by using small gravel chips, crushed granite, poultry grit, river sand, and aquarium gravel. This is a mixture of a well-drained soil that is suitable for cacti.

Or, you can always buy a soil blend made specifically for cacti.

Root decay is the result of overwatering and poor drainage. Since the plant does not thrive well in these environments, the roots may suffer root rot or may be infected with disease.

Since the roots are buried underground, it can be too late before you notice degeneration. Early signs include the rootstock or scion turning brown and the softening of the cactus itself. Immediately take the plant out of its pot and check if the roots have a black slimy and sluggish appearance. This indicates root decay.

Because the plant is already at the risk of dying, wash the roots and cut off the infected areas as soon as possible to prevent other parts from being affected. Since overwatering and poor drainage is the cause, place the cactus in a fresh soil mix.

Pest infestation is another reason for a wilting or dying moon cactus. Insects such as mealybugs, spider mites, and fungus gnats generally feed on the stem and juices of the plant and suck out all its nutrients. 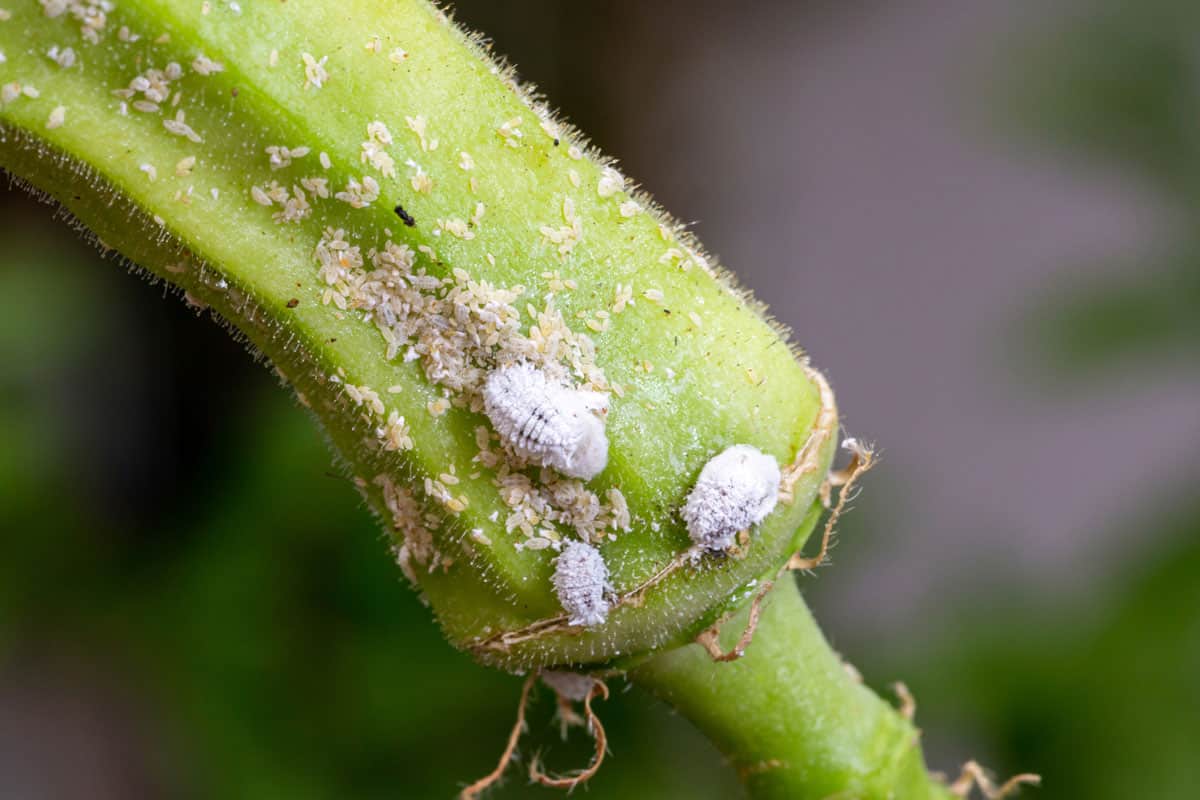 Mealybugs are white cottony soft-bodied insects that thrive and live in damp and temperate areas. They puncture or pierce their mouth strings through the stem of the cactus and feed on its sap. It generally sips all the nutrients the rootstock needs in order to sustain itself and the scion.

To treat your moon cactus, use cotton dipped in alcohol and dab the bugs with it. You can also use a spray solution—mix 1 teaspoon of vegetable oil, 1 teaspoon of rubbing alcohol, and 1 cup of water. Gently spray the solution onto the plant and repeat after a few days to prevent the bugs from infesting the cactus again.

Neem oil is also an effective alternative. It contains antifeedant properties that affect any insects that try to eat the plant. Use a spray solution - 1 teaspoon neem oil mixed with 1 gallon of water - on the plant every two weeks.

Spider mites, as the name suggests, are not insects but rather classified into the family of arachnids. Reddish-brown in color, these mites are too small they're unnoticeable. Similar to mealybugs, they feed on the tissues by eating your plant's nutrients. They generally thrive in dry and hot environments.

Wash both the rootstock and the scion with running water to rid of spider mites in large quantities. Then apply insecticides every week to control infestation and to eradicate them fully. Using neem oil mixed with water is also a safer alternative.

Fungus gnats are small dark flies that generally infest soil, potting mix, and other sources of organic matter. The larvae not only feed on fungi and natural materials present in the soil, but also chew plant roots.

Avoid overwatering your moon cactus and use a well-draining soil. If the problem persists, use insecticides.

In most cases, natural decay is the cause of such issue. All moon cacti have a short lifespan because of grafting and hybridizing. The chin cactus or the scion seems to act as a pest that relatively needs its host to survive. The rootstock cannot anymore sustain itself and the scion; thus, resulting in early deterioration.

If this situation seems to be the cause, you can sacrifice the scion by cutting or removing it from its host plant. However, grafting the scion onto a new rootstock is an alternative if you intend to save your chin cactus.

In some cases, purple scions can survive without a rootstock because they have enough chlorophyll in order for them to root, thrive and grow. Other colors—red, yellow, white, etc.—cannot survive on their own and needs a rootstock for them to continue living.

How Do You Save A Dying Moon Cactus? 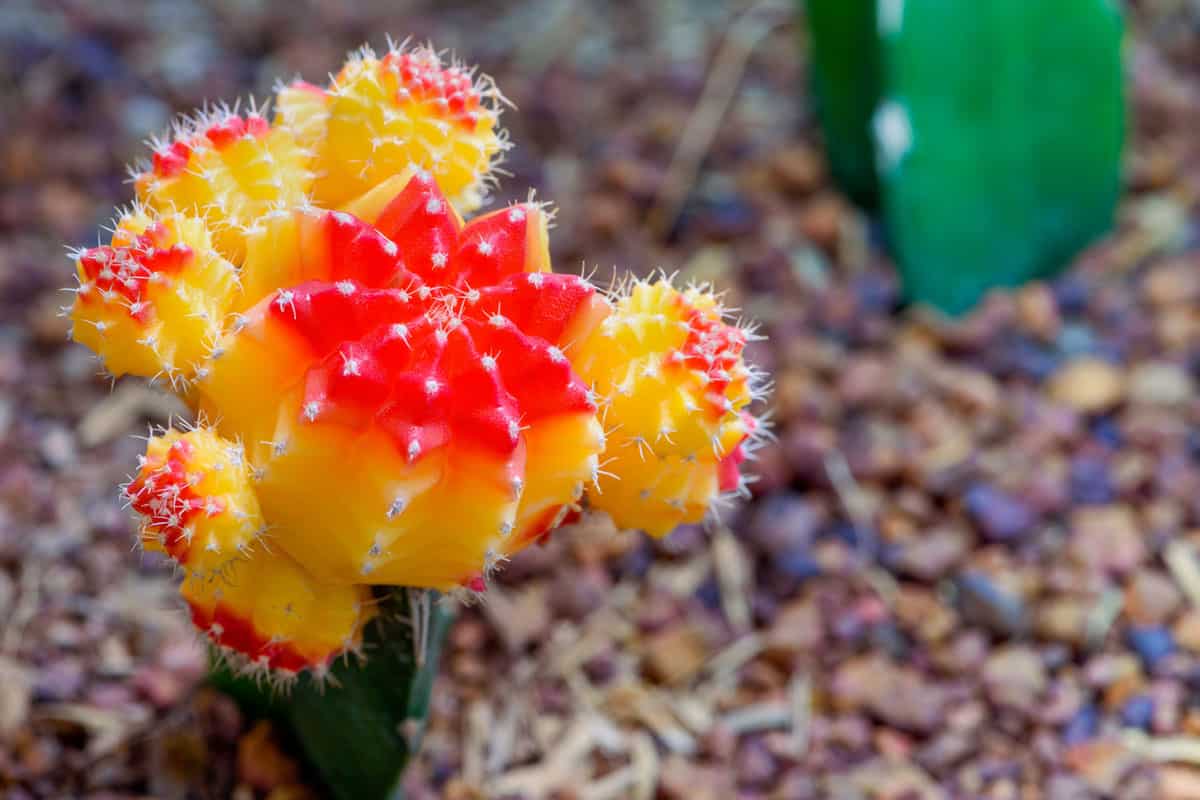 Water the plant regularly during the spring and summer seasons. Throughout the winter, your cactus does not require frequent watering. Wait until the soil is completely dry.

Moon cacti need to be placed in areas where they can get enough indirect sunlight. Prolonged exposure to direct light may harm the plant. On the contrary, colors begin to fade if left in too shaded environments. Indoors, place the cactus on a window ledge or in areas where it can get its needed light requirements.

As mentioned above, a well-draining soil and pot are ideal to use because it prevents root decay caused by overwatering and poor drainage. Pumice and perlite mixed with regular potting soil are ideal for optimal growth and development.

As a cactus, this plant generally thrives in mid-range temperatures throughout the year. Nevertheless, it is susceptible to freezing when exposed to frigid conditions of the winter months. To keep your moon cactus healthy and safe, place them indoors or in areas where temperatures are controlled. 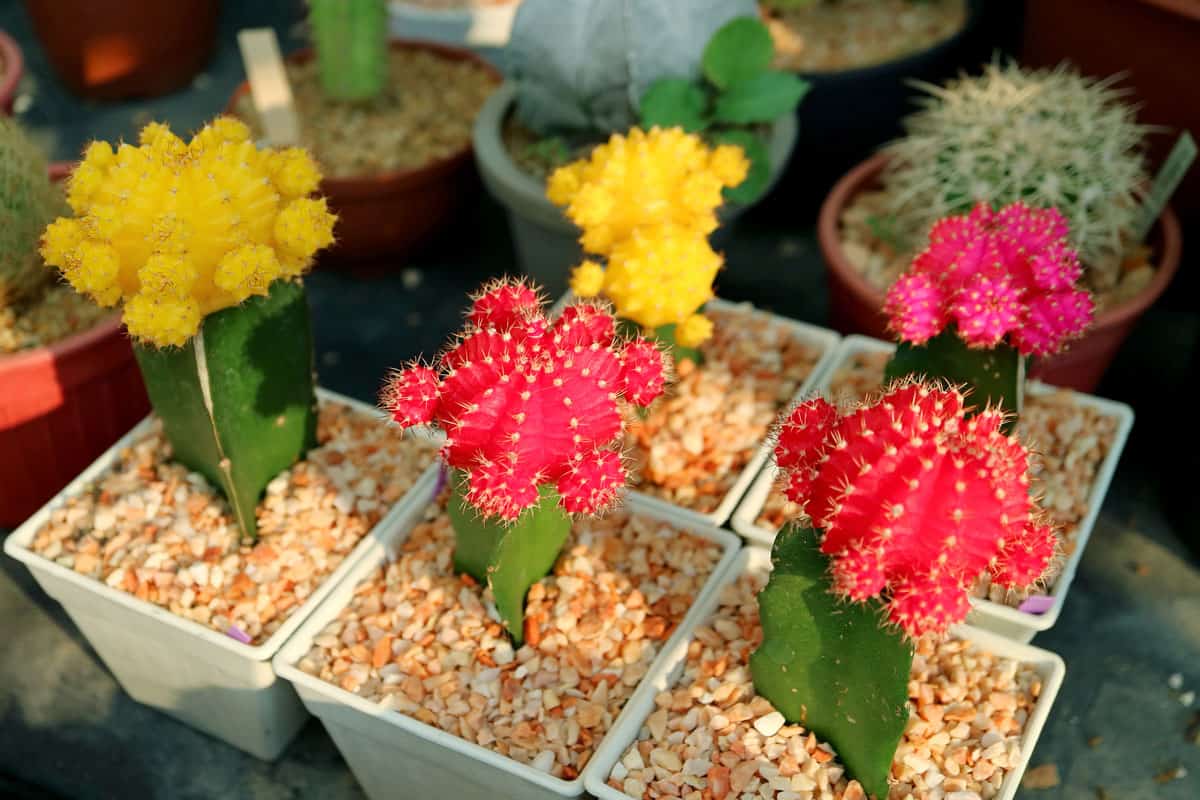 Grafting is a practice in horticulture where different species of plants are joined so that they appear to grow as a single element. In this technique, the scion or the upper portion of the plant is attached to the rootstock or the lower part of another plant.

The scion is chosen based on its ornamental properties and fruit-bearing qualities while the rootstock should be healthy and have the ability to thrive in specific growing conditions.

How Do You Graft A Moon Cactus?

Grafting is a fairly simple process. All you need is a sterilized knife, a chin cactus, and a dragon fruit. Prepare the scion by cutting off the top part of a healthy Gymnocalycium Mihanovichii. And then begin with making a rootstock by slicing the bottom part —at least 2 to 5 inches rooted stem of a Hylocereus Undatus.

Cut the upper portion and trim the edges so that it almost has the same size as the scion. Afterward, place the scion on top of the rootstock, ensure their freshly cut edges meet or are in direct contact with each other.

There are several ways you can affix the scion to the stock. The most traditional way is to surround the connection with a mixture of soil and moss the wrap it in plastic. This provides nutrients to the budding plant and maintains enough moisture to hydrate the scion. Place the grafted cactus in areas where it gets bright indirect light and wait for 2 to 3 weeks before the scion and rootstock fully bond. 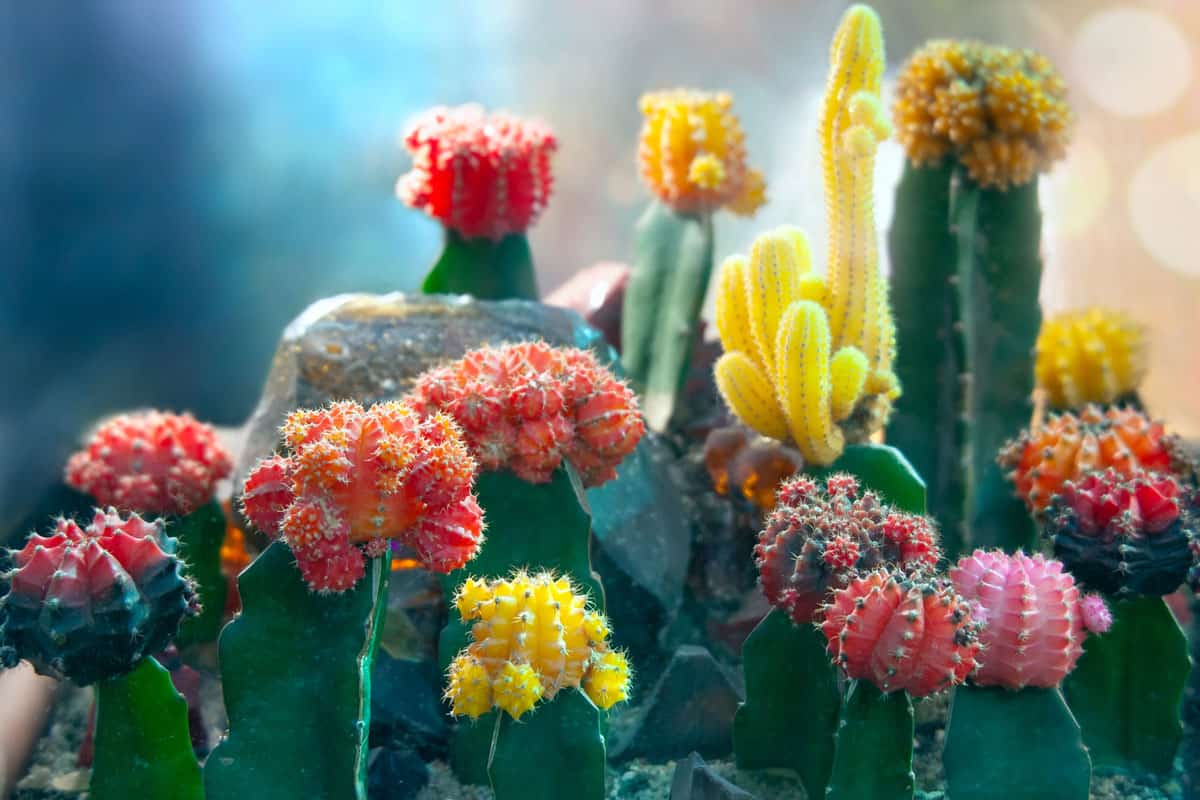 Moon cacti do not necessarily require too much maintenance. Remember the care requirements of your plant in order for it to thrive. We hope you have found this article insightful. Happy planting!

Does Sand Help With Soil Drainage?

68 Cactus Landscaping Ideas That Will Inspire You