If you've been struggling with leaking fuel from your chainsaw's muffler, this article is for you. We know how frustrating this can be, and this is why we took the time to figure out what causes this problem and how you can fix it.

A chainsaw muffler that is leaking gas is something that happens from time to time, especially for older chainsaws that need to be tuned up. In this article, we've got some tips to help you figure out which part of the chainsaw carburetor is the problem and how to fix it so read on!

What Does a Carburetor Do in My Chainsaw? How Does It Work?

When the chainsaw is started, the fuel pump draws fuel from the tank and pushes it through the fuel line and fuel filter. The fuel filter removes any impurities from the fuel. The fuel then passes through the carburetor and into the engine. 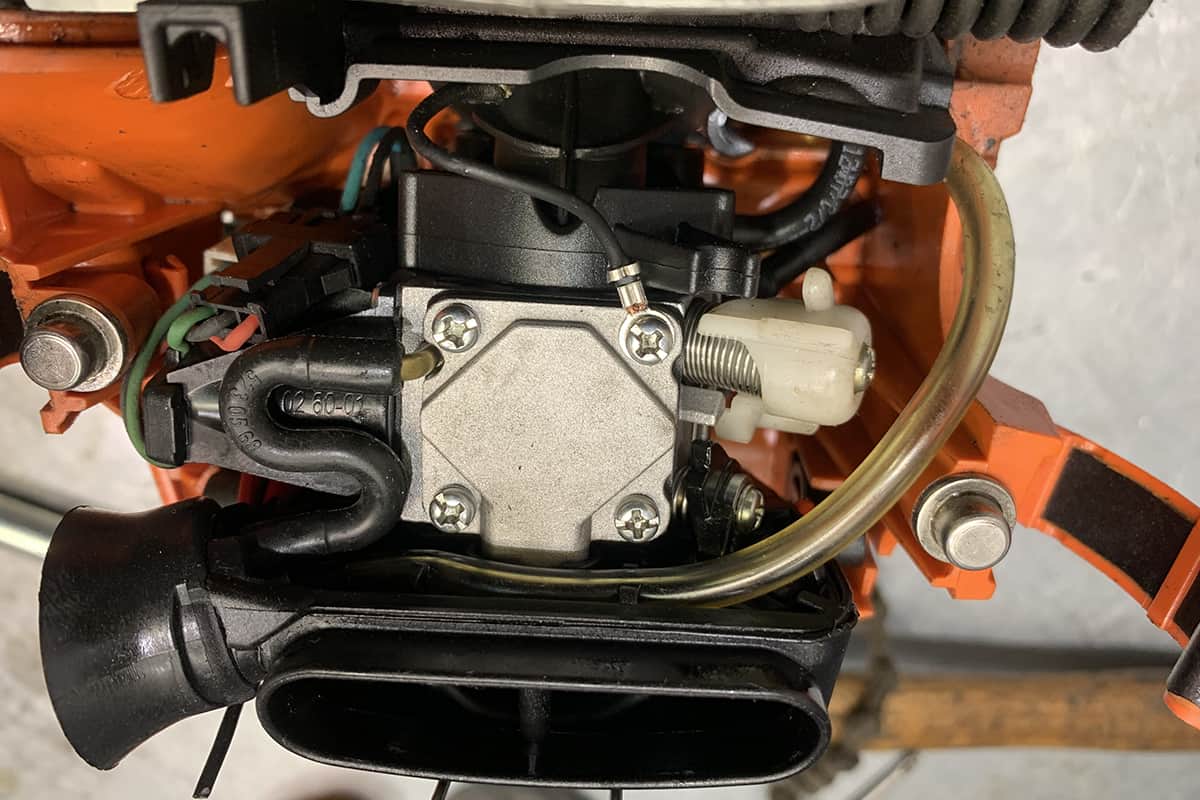 There are two main causes that can cause a chainsaw carburetor to flood:

Carburetor float or needle valve is stuck in the closed position

If the needle valve becomes stuck in the closed position, it will not be able to shut off the flow of fuel into the carburetor when the fuel level rises.

In addition, this can cause the fuel to continue to flow into the carburetor, even when the float has reached its maximum height and is trying to shut off the fuel supply.

This can result in the carburetor becoming flooded with fuel, which can cause problems with starting and running the chainsaw and even gas leaking out of the muffler. 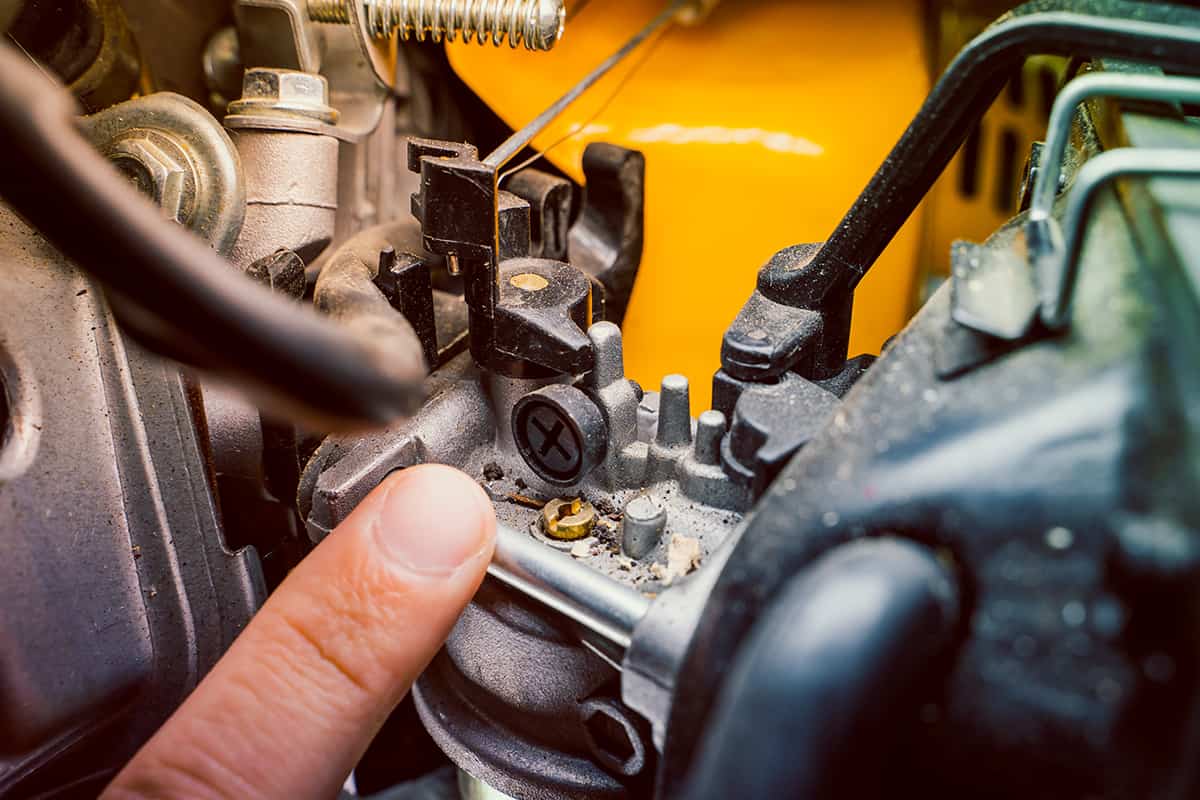 Check out this carburetor cleaner on Amazon.

A damaged carburetor diaphragm can cause chainsaw carburetor flooding because the diaphragm is responsible for controlling the flow of fuel into the carburetor.

When the diaphragm is damaged, it may not be able to properly regulate the flow of fuel, which can lead to too much fuel entering the carburetor. This excess fuel can then flood the carburetor.

Furthermore, it is important to follow the manufacturer's instructions for your specific chainsaw model when replacing the carburetor diaphragm, as the process may vary slightly. If you are not comfortable working on the chainsaw yourself, it is best to take it to a professional for repair.

Alternatively, if you don't see any physical signs of damage on your carburetor's diaphragm, you can try to clean it with a carburetor cleaner instead. The video below shows exactly how to do this.

Muffler Vs. Exhaust: What is the Difference?

What is a muffler? 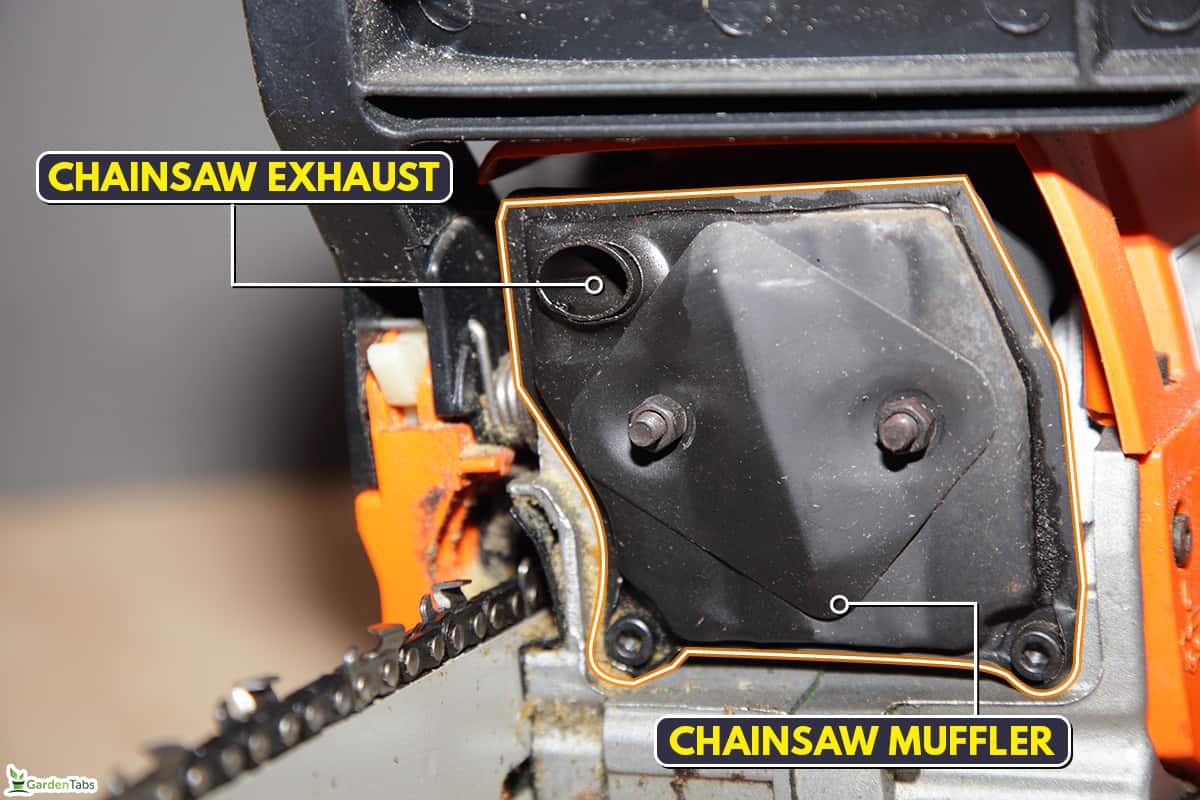 A chainsaw muffler is a device that is part of the exhaust system of a chainsaw and is designed to reduce the noise produced by the engine as it exhausts gases.

In addition, the muffler works by providing a path for the exhaust gases to flow through, and using a series of chambers and perforated tubes to break up the sound waves produced by the gases as they pass through.

What is an exhaust system? 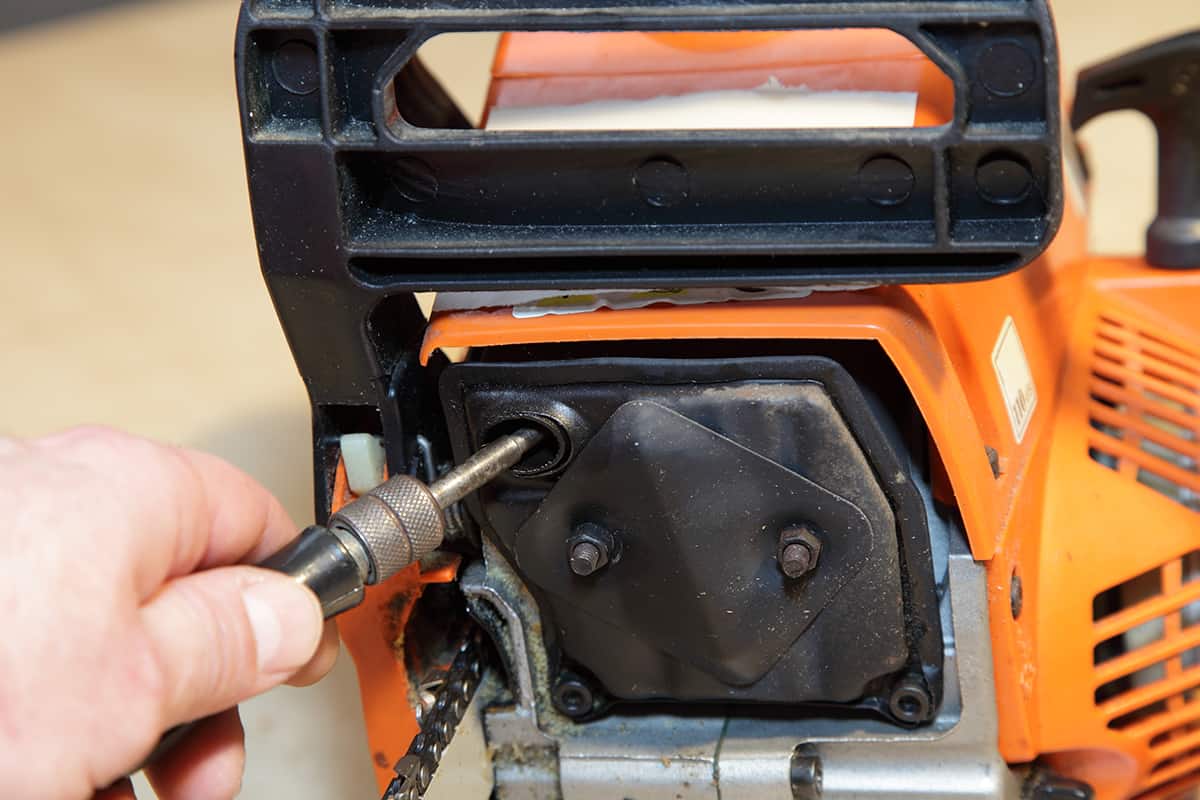 The chainsaw exhaust is the entire system through which the exhaust gases from the engine are expelled from the chainsaw.

The exhaust system consists of the muffler, as well as the pipes and other components that connect the muffler to the engine and allow the exhaust gases to be released into the atmosphere.

Moreover, the exhaust system is an important part of the chainsaw's overall performance, as it helps to control the noise produced by the engine and to prevent harmful gases from building up inside the chainsaw.

How To Clean Chainsaw Muffler 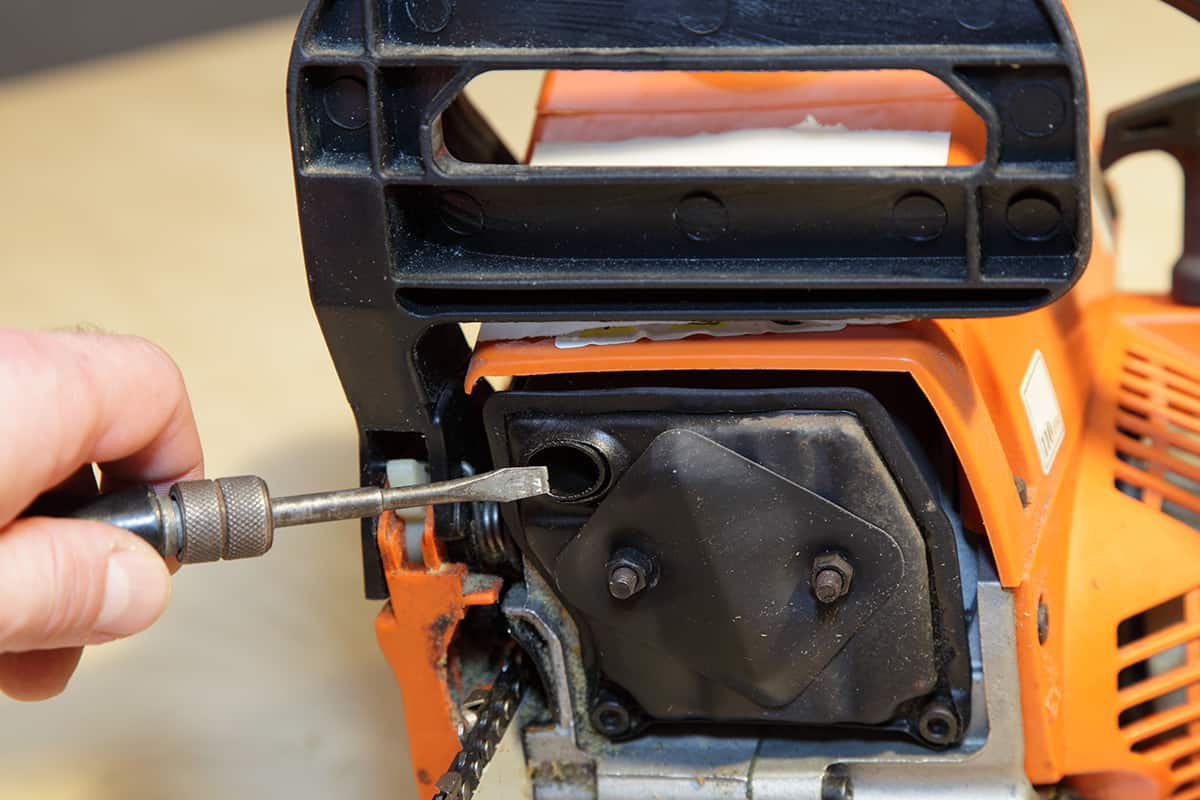 To remove the muffler from a chainsaw for cleaning, you'll need to follow these steps:

Check out this heavy-duty degreaser on Amazon.

Remember to always use caution when working with power tools, and make sure to follow all safety instructions provided by the manufacturer.

Removing the muffler from a chainsaw could potentially increase its horsepower a tad more, but it is not a recommended modification.

Further, this could lead to an increase in noise levels, which can be hazardous to the operator and those nearby. In general, it is best to leave the muffler intact and not try to modify the chainsaw in this way.

My Chainsaw is Leaking Oil from the Exhaust - What's Going On?

There are three possible causes for this issue:

Stale gasoline can cause oil to leak from the muffler of a chainsaw in a few different ways. One possibility is that the stale gasoline has broken down and become gummy, which can clog the carburetor and the fuel lines and cause the fuel to back up into the crankcase.

In addition, this can cause the crankcase to become pressurized, which can force oil out of the seals and gaskets, including those around the muffler.

This is why it is important to drain the stale gasoline from the tank and replace it with fresh gasoline in order to prevent further problems.

An incorrect air-to-fuel mixture in a chainsaw can cause the engine to run at an excessively high temperature, which can lead to oil leakage from the muffler. 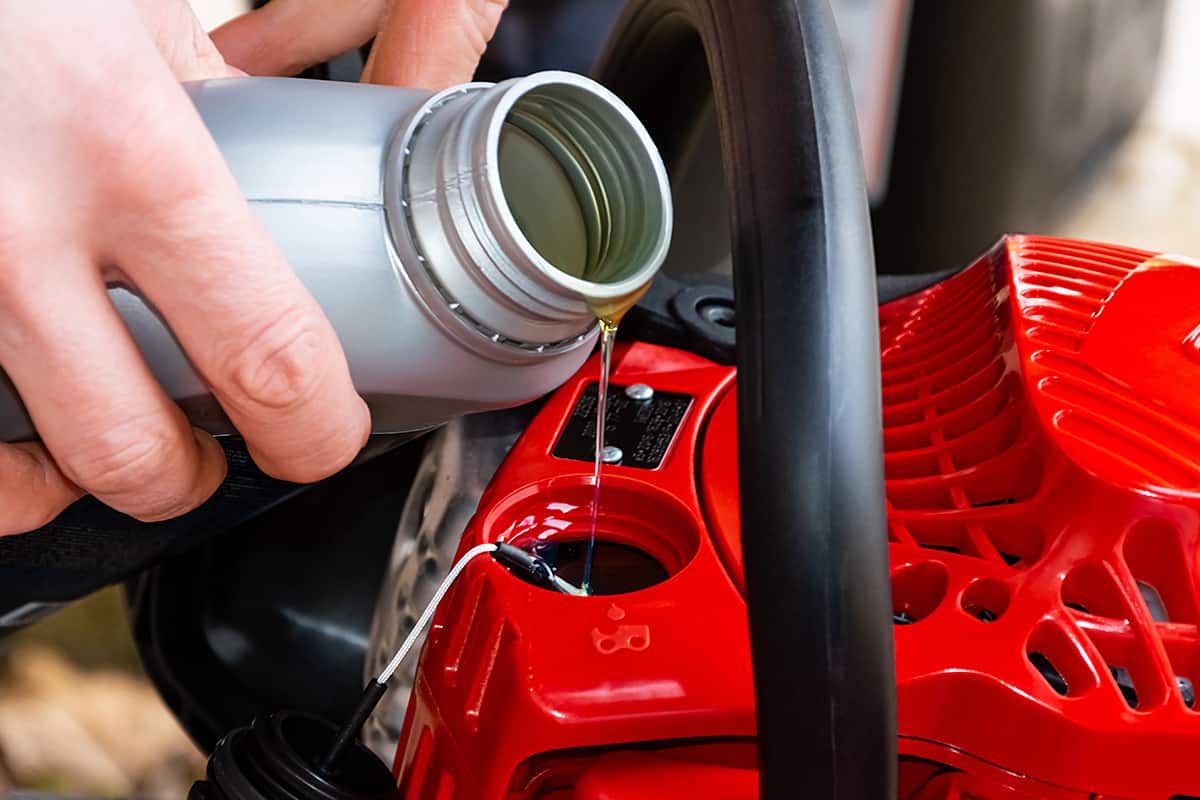 Using the wrong type of engine oil in a chainsaw can cause the oil to break down and lose its effectiveness as a lubricant. This can lead to excess wear and friction on the internal components of the chainsaw, which can cause seals to fail and oil to leak from the muffler or other areas of the chainsaw.

In addition, it is important to use the correct type of oil as specified by the manufacturer to ensure proper lubrication and to prevent damage to the chainsaw.

Check out this chainsaw engine oil on Amazon.

When you have a chainsaw that is leaking gas from the muffler, it is usually a result of a flooded carburetor. The good news is that it doesn't mean that you're going to have to replace your carburetor,, You may only need to clean or tune the carburetor up. Check your chainsaw manual for your carburetor's specs so you'll be guided on the correct adjustment settings.

Can You Use Motor Oil In A Chainsaw? Should You?

Why Is My Chainsaw Blowing Smoke [Inc. Blue, White, Black]?