Black-eyed Susan is a great addition to gardens and yards because its vibrant yellow flowers accentuate any landscape design. That being said, you might be wondering why your plant hasn’t produced attractive blooms yet. Don’t worry! We have researched your question and here is what we’ve found.

Black-eyed Susans' failure to produce blooms could be primarily caused by any of the following:

There are several reasons that may prevent your black-eyed Susan from producing blooms. Fortunately, they can be remedied by identifying the actual cause and optimizing the conditions. Read on and find out the ways you could remedy the problem.

How Old Is Your Black-eyed Susan? 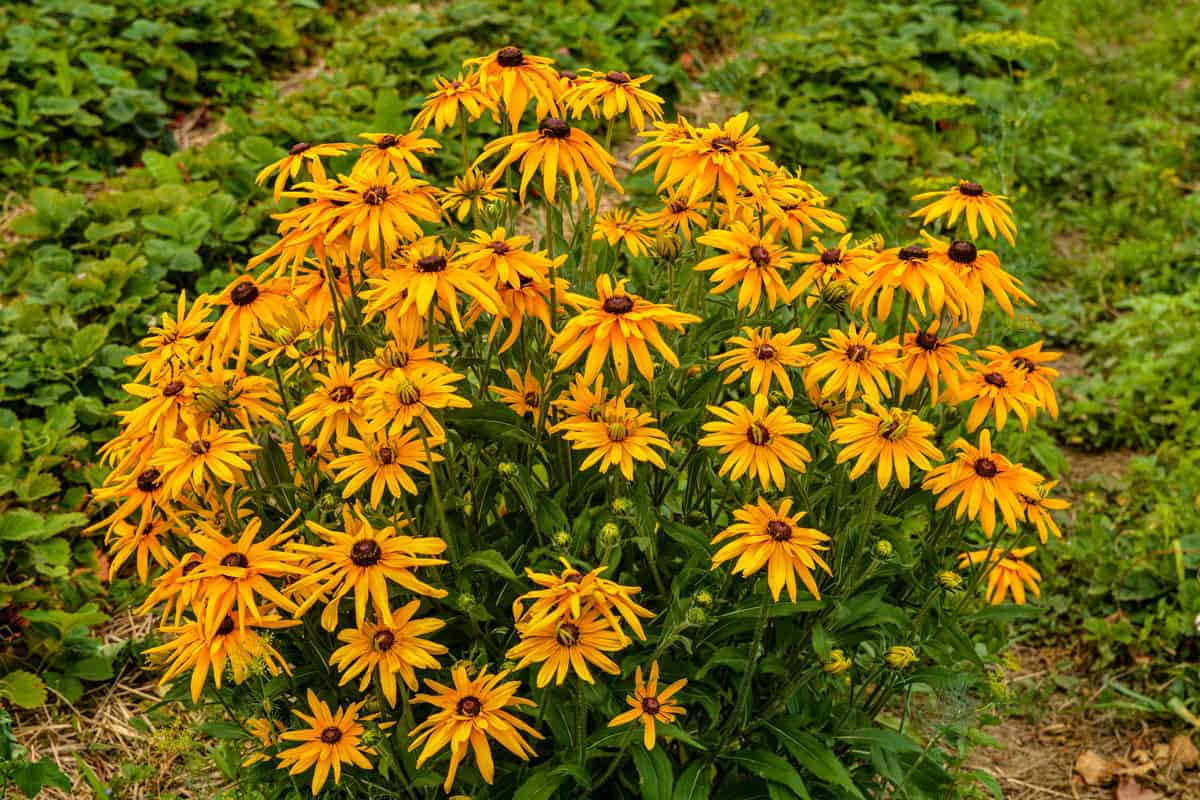 Is your black-eyed Susan newly planted? If so, there's no need for concern. They don't usually produce any flowers during the first year since nutrients are used for stem and foliage development. They typically bloom in the summer of the following year.

If you planted them late in the season, expect the flowers to appear during early fall of the succeeding year.

Unfortunately, the blooms would die back come winter. Once they become established, however, flowers would generally appear from June to August or early September.

Is My Black-eyed Susan Getting Enough Sunlight?

If your black-eyed Susan is a few years old and has failed to produce blooms, observe the amount of sunlight it gets on a daily basis. They usually thrive in full sunlight but can tolerate and grow in partial shade.

Most varieties are relatively small, so nearby trees or other plants could reduce their lighting. Sunlight exposure could also be inadequate if they are planted close to your house or other structures like solid fences.

This condition would hinder photosynthesis and food production necessary to support plant growth and flower production. The portion of the plant next to a wall or divider may not get any sunlight at all.

How Much Light Do Black-Eyed Susans Need?

To encourage profuse flowering, black-eyed Susans should be exposed to at least six to eight hours of full sunlight daily. The plant won’t produce prolific blooms if grown in a partially-shaded environment.

You can uproot directly-grown plants and relocate them to a sunny area in your garden or yard.

How Close To Plant Black-eyed Susans? 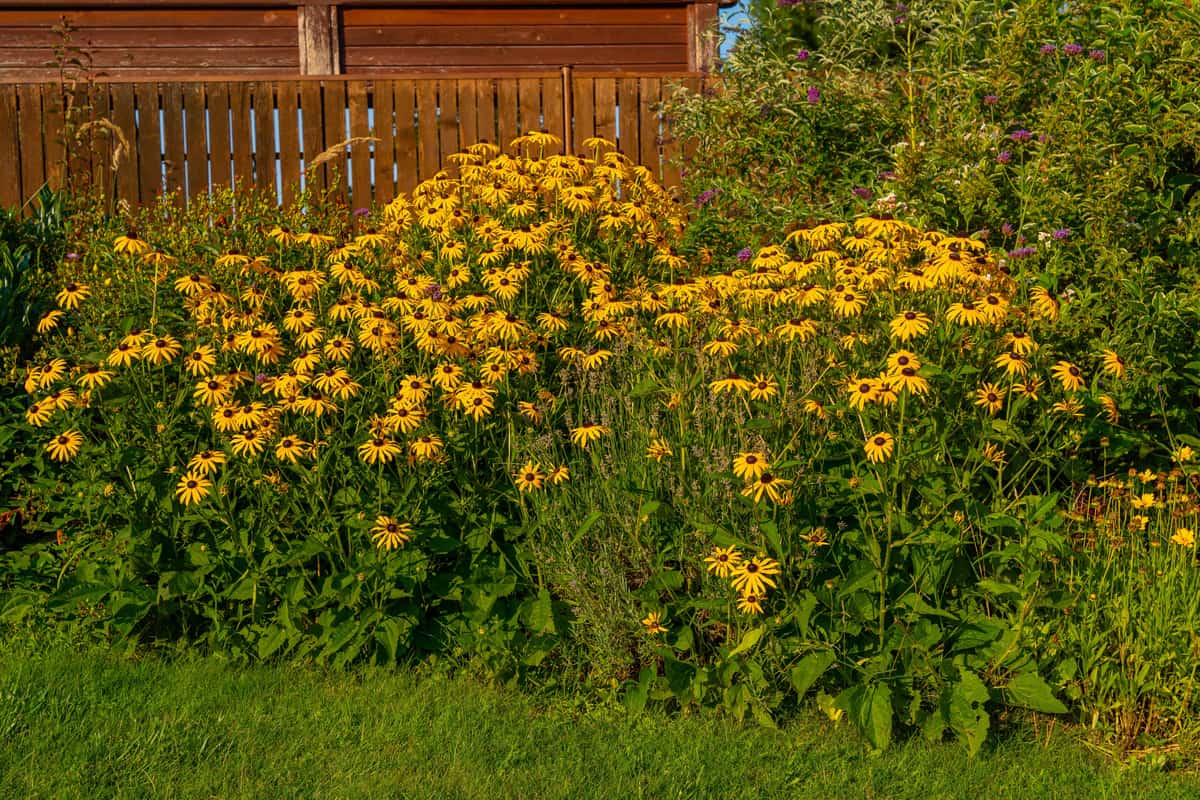 Black-eyed Susans feature underground stems called rhizomes which allow them to spread rapidly and form large clumps or clusters. This would result in overcrowding and competition for air, water, and essential nutrients. Consequently, elements present in the soil would not be enough to supplement flower production.

Sunlight and air circulation are affected if the plant becomes too dense. The internal structures are deprived of oxygen and photosynthetic ability. They could begin to die back, affect the emergence and development of buds attached to the stems.

How To Thin-Out Black-Eyed Susans?

Remove sections that are too close together by uprooting or digging the stems and planting them elsewhere. If the foliage appears too dense, it is time to begin thinning your plant.

Do You Prune And Deadhead Regularly?

Regular pruning revitalizes most plants and encourages new growth by lessening the foliage that competes for nutrients. Deadheading or the removal of faded and wilted flowers diverts reserves for the production of new blooms. It also conditions the plant to produce more flowers instead of seeds.

Both procedures limit the use of plant food and energy and divert it to producing blooms. Though they may not begin flowering immediately after pruning, give them adequate time to refocus their energy.

How To Prune Your Plant To Promote Flowering?

Pruning or deadheading will promote a second batch of blooms late in the fall. Cut them at a clean angle to encourage healing and avoid exposure to parasites. Limit trimming to about a third of the plant’s total foliage and avoid the tendency to over prune.

What Fertilizer Do You Apply? 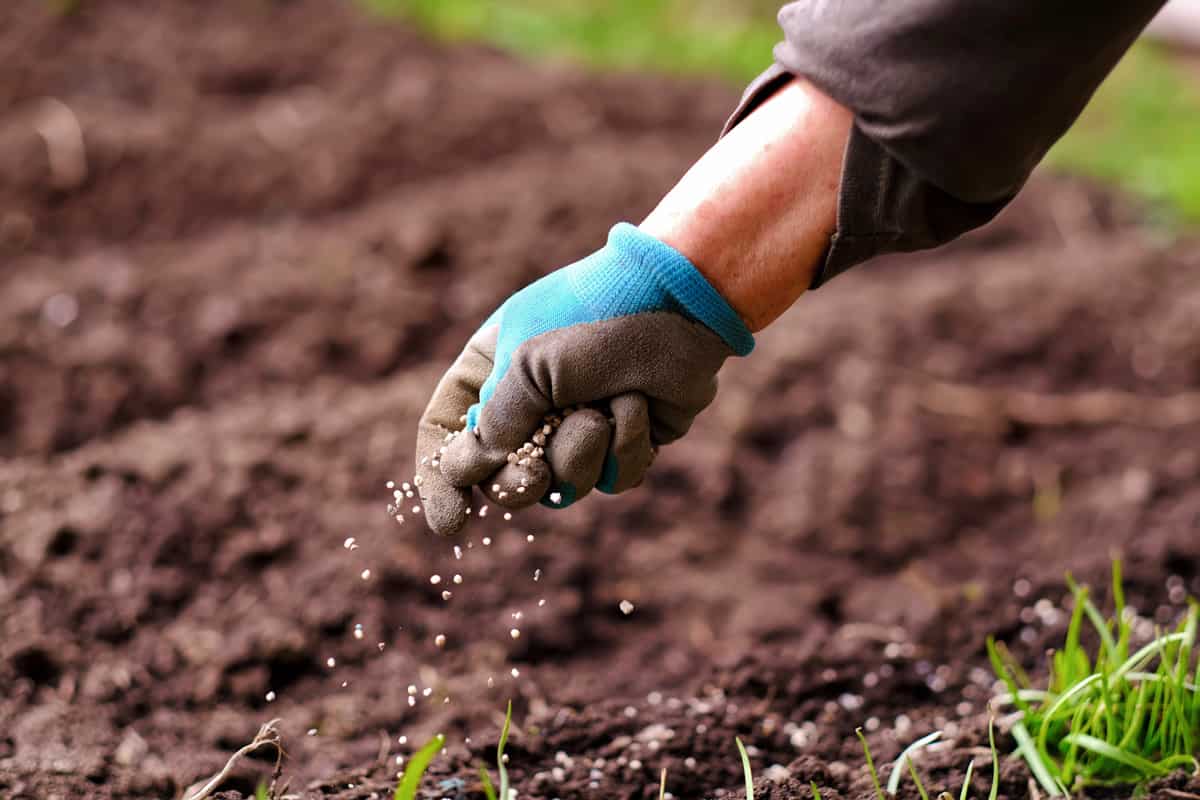 Fertilizers rich in nitrogen content promote the growth of leaves instead of flowers. The foliage tends to be thick and lush without blooms because the plant is lacking of nutrients that encourage flower production.

Over fertilizing your plant results in abrupt plant growth with an inadequate root system to support its development. If the roots are poorly developed, flowering is reduced because there is not enough energy to sustain it.

What Soil Amendment Will Best Benefit Your Plant?

Black-eyed susans often do well even without being fertilized.

However, if you intend to feed the plant to encourage flowering, use a slow-release soil amendment high in phosphorus to support the transport of energy needed for root formation and flowering. As much as possible, avoid fertilizers high in nitrogen.

What Type Of Soil For Black-eyed Susans?

Typically, black-eyed Susans thrive in the wild and are adaptive to most soil conditions. However, once they are grown away from their natural habitat, the plant tends to be more selective. If they do not produce blooms at all, the growing medium may be too compacted due to a dominant clay composition.

Dig or toil around the plant to determine the soil density. If the ground proves too hard to loosen, chances are the soil is too compact for the roots to develop fully.

This will impede the nutrient uptake necessary to produce flowers. Drainage will be affected and constant wet or soggy soil may lead to root rot.

Black-eyed Susan can tolerate almost all soil conditions but is best grown in a slightly-fertile, moist, but well-draining growing medium. Since they prefer neutral to alkaline soil, use an all-purpose fertilizer without peat moss.

What Is The General Climate In Your Area?

Black-eyed Susans thrive best in temperate climates and are affected by extreme temperatures. If exposed to frigid conditions as well as intense heat, the plant will fail to bloom.

During winter, the cold weather and lack of sunlight tend to slow plant growth because the energy needed for photosynthesis is limited. On the other hand, extreme heat will scorch the leaves, which are vital in the food-making process of plants.

The lack of carbohydrates and other essential elements could reduce the production of blooms or totally hinder their development.

What Temperature Does Black-Eyed Susan Prefer? 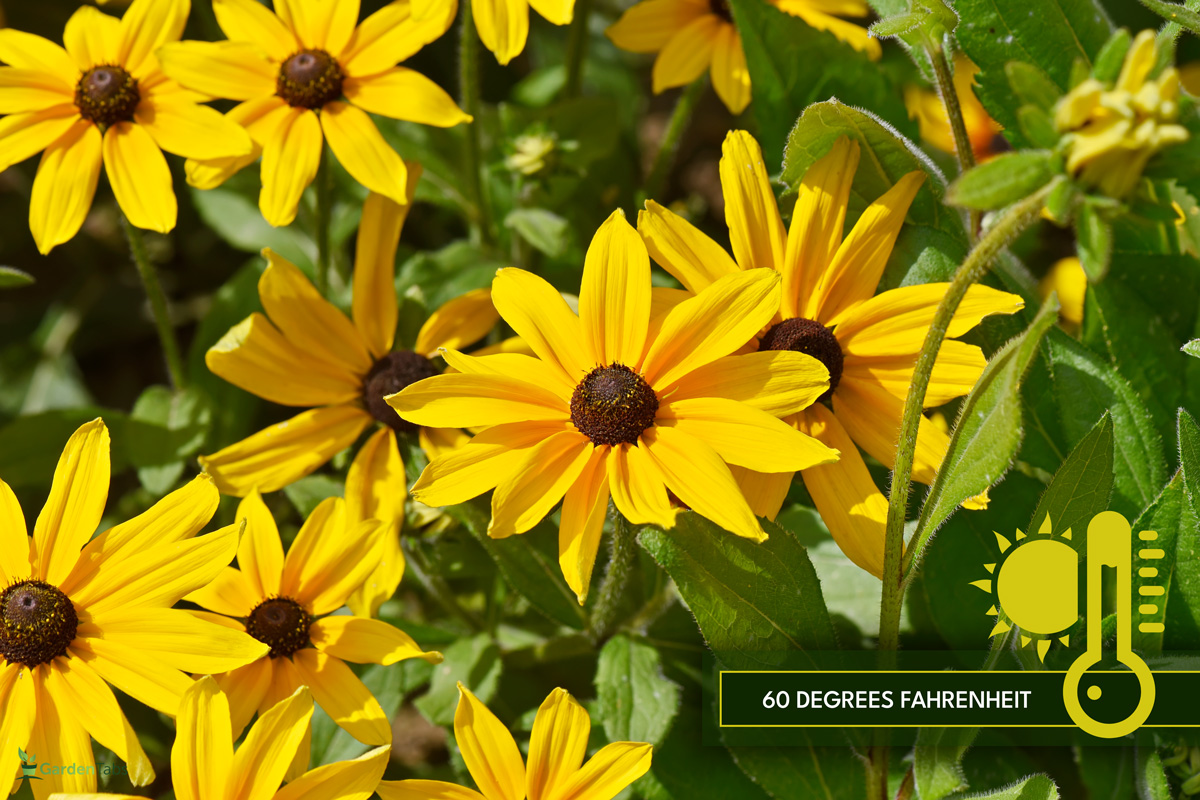 Native to the Central United States, black-eyed Susans are ideally grown in USDA hardiness zones 9 to 12. They prefer warmer weather with temperatures beyond 60 degrees Fahrenheit.

Although the plant fares well in humid environments, proper air circulation within the foliage is important to prevent fungi proliferation.

Signs Of Infestation On Black-eyed Susans? 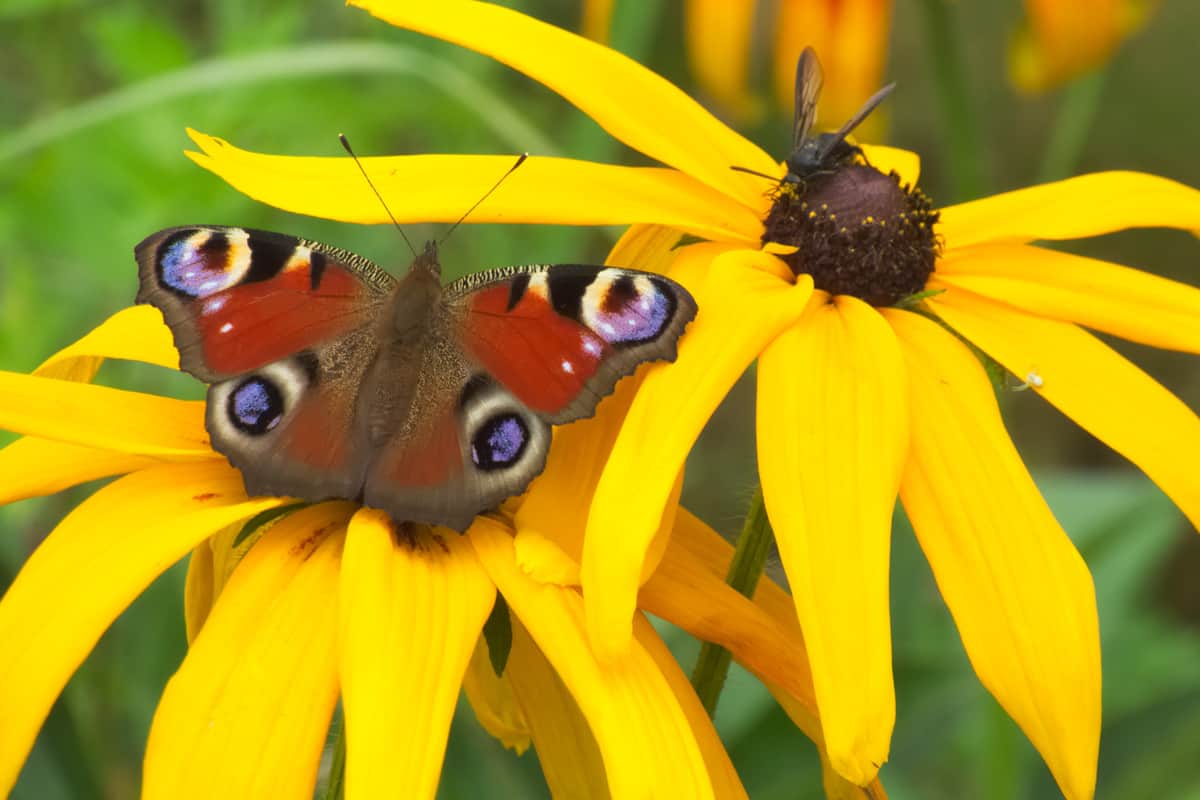 Black-eyed Susans aren't generally affected by common plant parasites, but some varieties may be susceptible to whiteflies and scales. Any form of infestation would limit the production of blooms and manifest in other ways. Yellowing leaves that fall prematurely could be a sign of disease.

The nutrients and energy are utilized to resolve the condition which creates insufficiency and poor growth. Your plant could show signs of stress, eventually affecting flower production.

How Do You Get Rid OF Black-Eyed Susan Bugs?

Solutions and horticultural oils can be used to treat an infestation. You can begin by spraying the foliage with a mild solution of soap, water, and neem oil to coat the leaves and infected portions.

The oil has natural properties that suffocate the insects and affect the way they feed. After a few days, the effect wears off, so you will need to regularly apply the solution – do so once a week until the infestation is resolved.

Check out Ready To Use Neem Oil Spray on Amazon.

How Do You Take Care And Maintain Black-eyed Susans?

Once the issue has been resolved, how exactly do you care for and maintain the plant to produce continuous blooms?

How Much Water Do Black-Eyed Susans Need?

Ideally, black-eyed Susans should be watered thoroughly if the topsoil seems dry. Newly-planted varieties should be hydrated regularly during their first year to promote root formation.

On the other hand, established plants are not particular about their hydration requirements and can tolerate periods of drought.

Will Compost And Mulching Help?

Augmenting the soil with compost will improve soil composition and provide the plant with adequate nutrients to sustain its growth and promote better flowering. Furthermore, adding a layer of mulch around the base will help retain soil moisture.

Although there are several reasons that prevent black-eyed Susans from producing prolific blooms, there are simple solutions to remedy the problem. They should be given the proper growing conditions and be pruned as well as thinned occasionally to promote flowering. That said, we hope the article has answered your query.

How And When To Transplant Black-Eyed Susans