Marigolds are known as one of the most popular edible flowers, but did you know that some varieties are actually mildly toxic to humans and other animals? If you grow them in your garden, it’s important to know which marigolds are toxic or otherwise not edible so you can keep your loved ones safe. But don’t worry, we’ve done the research and found exactly which varieties are toxic, so you can have peace of mind.

Although marigolds are generally edible, several varieties are mildly toxic for humans and other animals. However, humans can eat any variety, even the mildly toxic kinds.

The toxic varieties are all part of the tagetes genus and include:

Marigolds have mild to moderate levels of toxicity for dogs, cats, rabbits, and guinea pigs, and should be avoided by these species. Some other plants with the common name marigold, such as pot (or English) marigold (calendula officinalis) and marsh marigold (caltha palustris) are actually part of different genera. These are not true marigolds and are generally nontoxic.

Although some types of marigolds have toxic effects for certain species, other animals (including humans!) receive great health benefits from them. We’ll walk you through all the differences so you can feel confident as you decide which marigold varieties to plant in your garden. 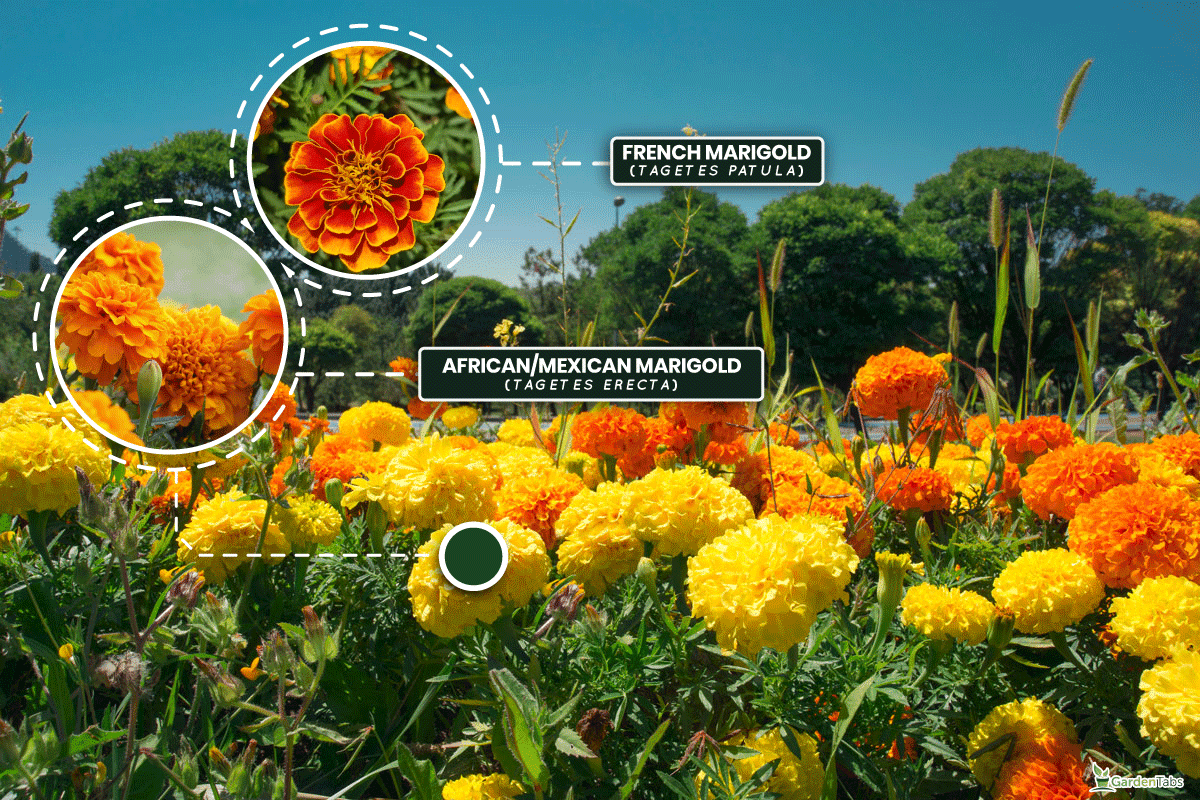 What Is The Difference Between Marigolds And Calendula?

Although they're often confused with each other because they share the same common name, calendula and true marigolds are from two separate genera. Marigolds are part of the tagetes genus, while calendulas share their name with their genus calendula. 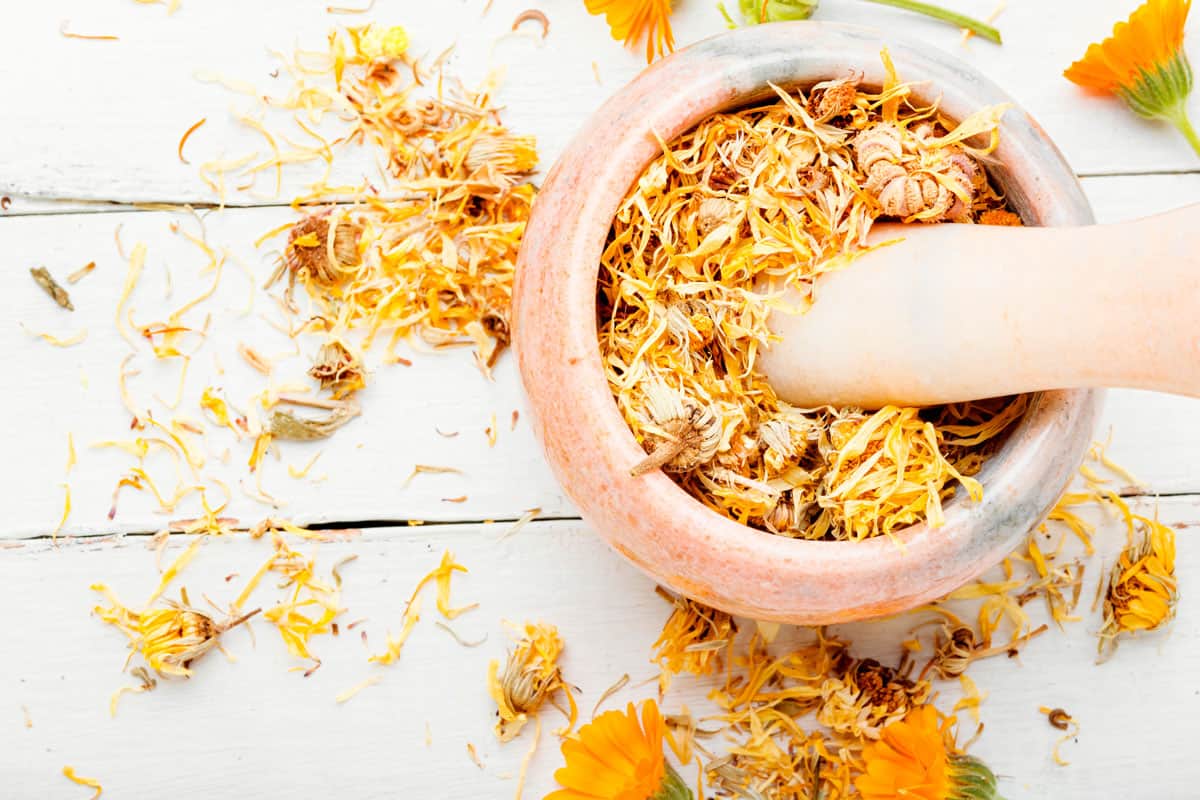 As we mentioned earlier, although marigold has some medicinal uses that are similar to calendula, several types are mildly toxic for humans and other animals.

Calendula, on the other hand, is completely nontoxic and is often used to soothe skin ailments like eczema or acne, heal wounds, and protect against heart disease.

Although they also look similar, marigolds and calendula have some distinct differences. While calendulas have long straight petals arranged in a disk shape, marigolds' petals are oval, almost wavy, and create a round, bushy flower head.

Their size differs as well. Calendulas grow between 12-24 inches tall while marigolds have more variety, reaching heights of 6 inches to 4 feet.

Marigolds and calendula also smell very different. Calendulas have a sweet, dusky smell similar to tree sap, but marigolds have a spicy, pungent odor that is irritating to many noses. We'll discuss why this odor is so unpleasant next!

Which Marigolds Are Poisonous To Humans 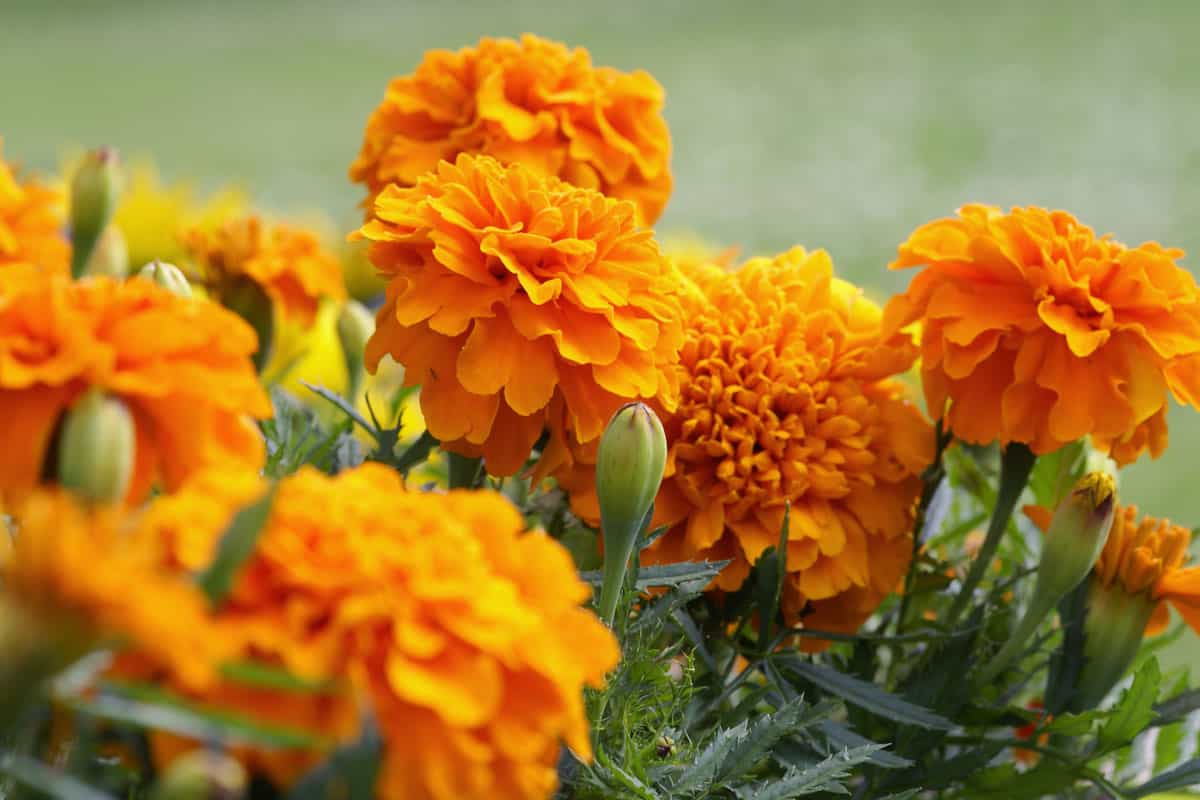 Technically, all marigolds are toxic because they all contain phototoxic thiophene derivatives, which are chemicals in the flower that become toxic when exposed to light.

In the case of marigolds, thiophene is the chemical that gives the plant its antimicrobial, anti-inflammatory, analgesic, antitumor, and antihypertensive properties. However, this is also what causes its toxicity.

However, for most humans, the worst that will happen is irritation and redness in the eyes, nose, and skin. If you’ve ever smelled a marigold and ended up with a burning nose or itchy red spots on your skin, now you know the reason why!

Since thiophene is found throughout the marigold’s petals, stem, roots, and leaves, irritation can occur from ingesting or simply brushing up against the plant.

Out of all marigold varieties, the two most likely to cause a reaction are the French marigold (tagetes patula) and the African (or Mexican) marigold (tagetes erecta). However, they are still considered edible for humans and have health benefits such as lowering inflammation and fighting fungal infections.

Are Marigolds Poisonous To Dogs? 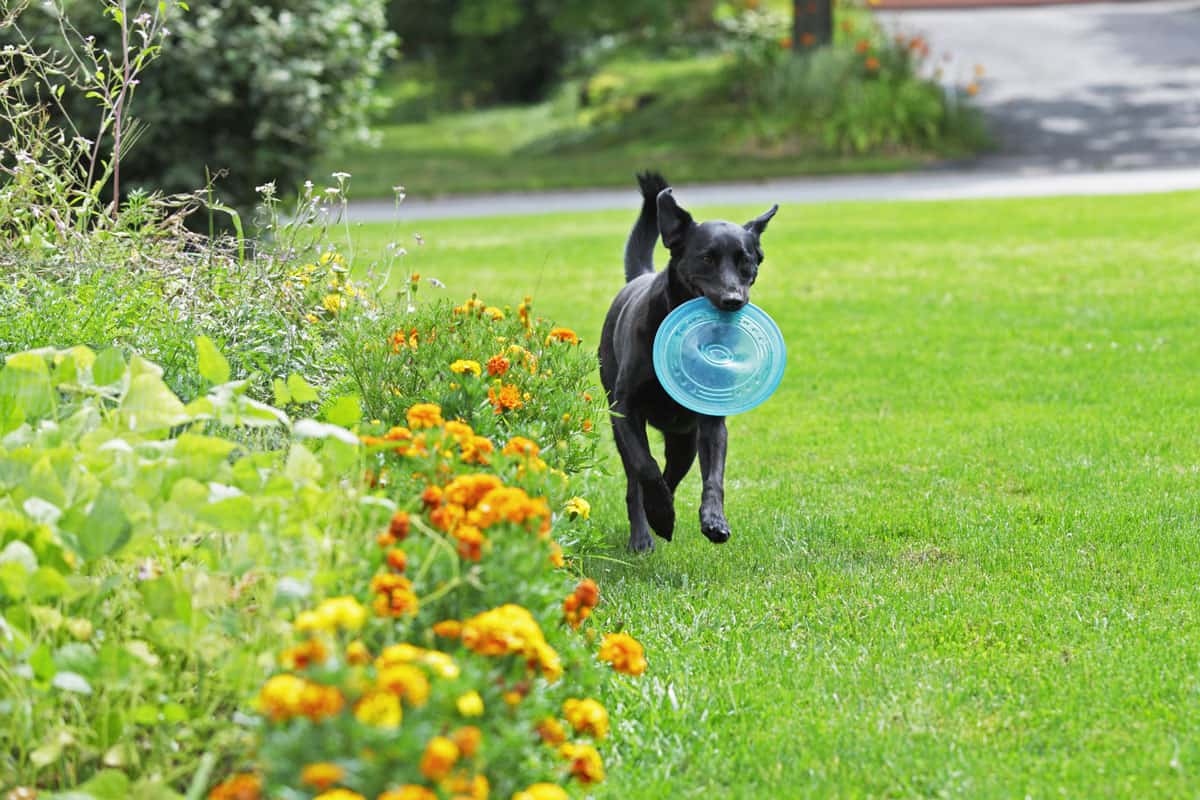 Several varieties of marigold are poisonous to dogs, including the French marigold, African marigold, and pot marigold. The sap of all three varieties will cause gastrointestinal discomfort if ingested, especially in large quantities. Plus, if the sap gets on the dog’s skin, it can cause redness and itching.

The good news, though, is that all three are considered only mildly toxic for dogs. Although your dog might be uncomfortable for a few hours, the toxicity level is not life-threatening. However, it’s always a good idea to consult your vet just in case.

Are Marigolds Poisonous To Cats? 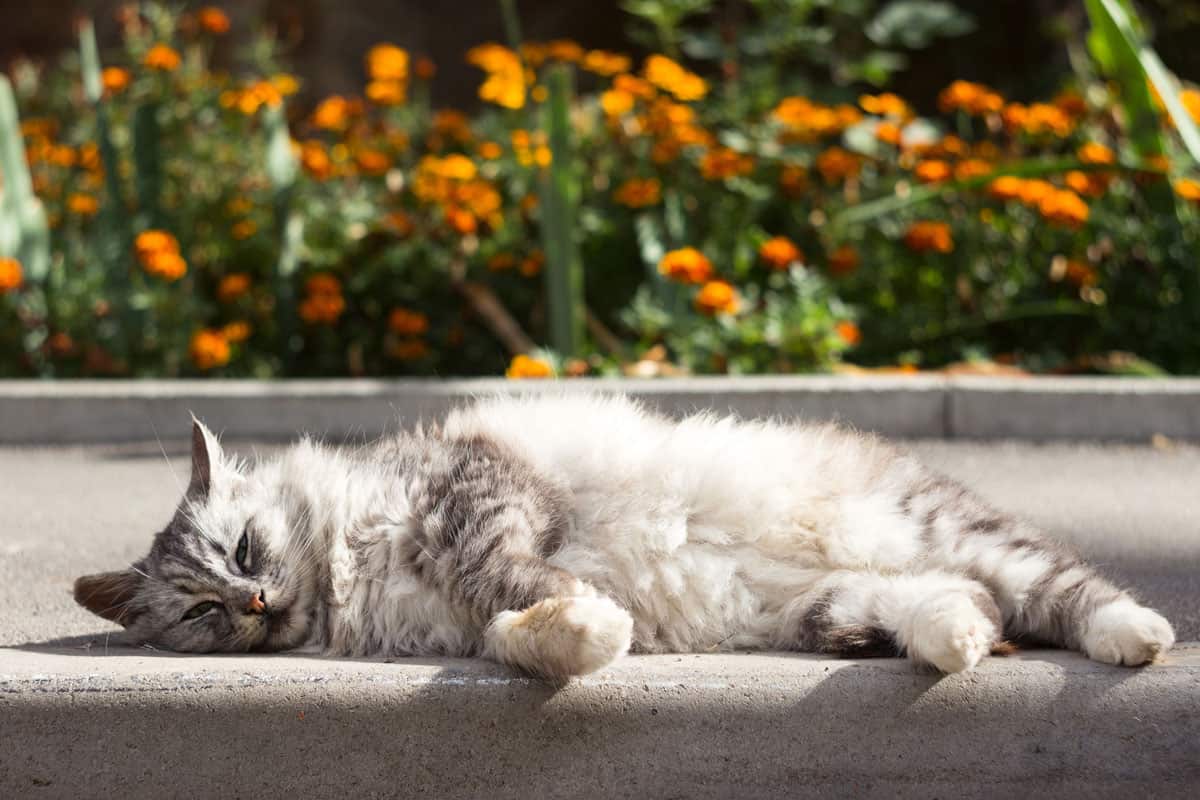 Due to their generally smaller size, cats suffer a bit more from encountering marigolds than a dog would. If eaten, they can cause gastrointestinal problems like diarrhea and stomach pain, and oral problems like drooling and mouth irritation. The marigold’s sap can also cause skin irritation.

Again, although all members of the tagetes genus are toxic to cats, they only cause mild symptoms that are not life-threatening. However, it’s still best to keep your cat away from all marigolds and contact your vet if they do happen to ingest any. 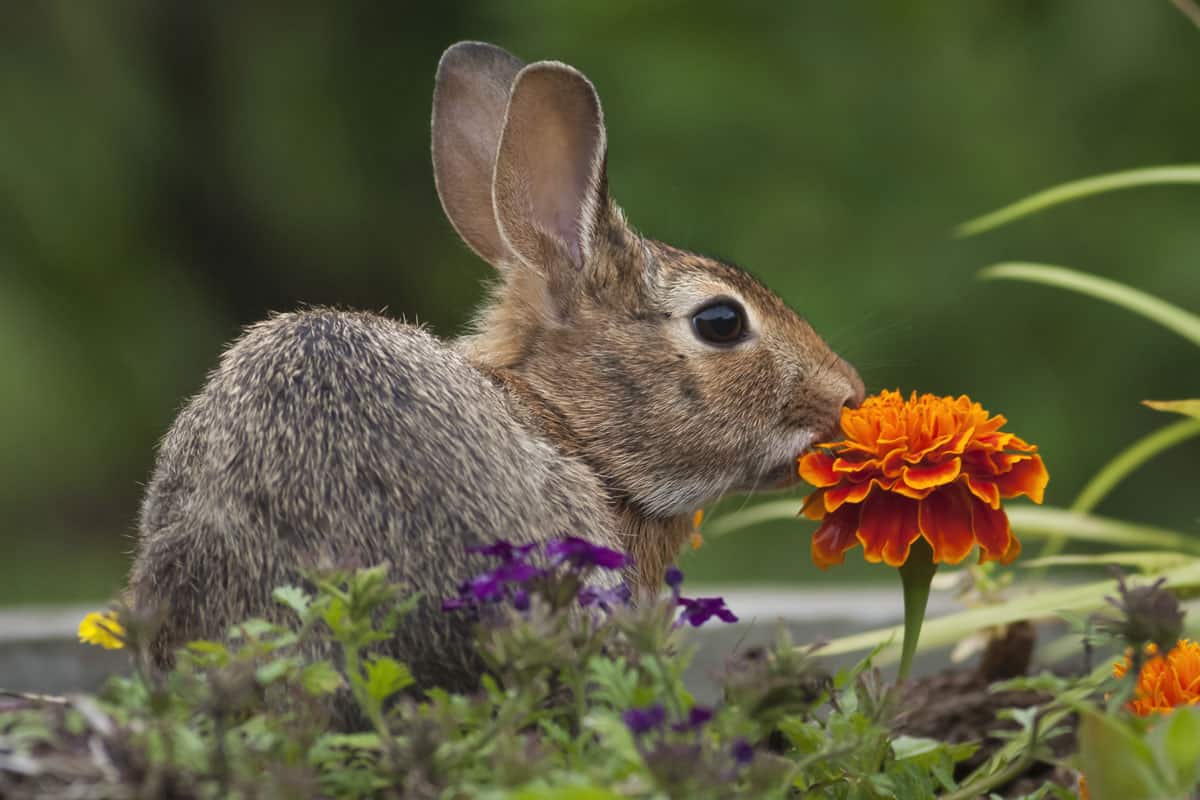 Although many rabbits enjoy munching on pot marigolds, the French, African, and marsh marigold varieties are toxic.

French and African marigolds can cause intestinal discomfort and skin irritation, similar to the effect they have on dogs, cats, and humans. Thankfully, rabbits find the flower's strong smell repulsive and typically avoid them.

As a member of the buttercup family, marsh marigolds contain protoanemonin. This toxin can cause lesions in the digestive tract, convulsions, and skin irritation. That makes them especially dangerous for rabbits. Pot marigolds, on the other hand, are perfectly safe and make a good treat. 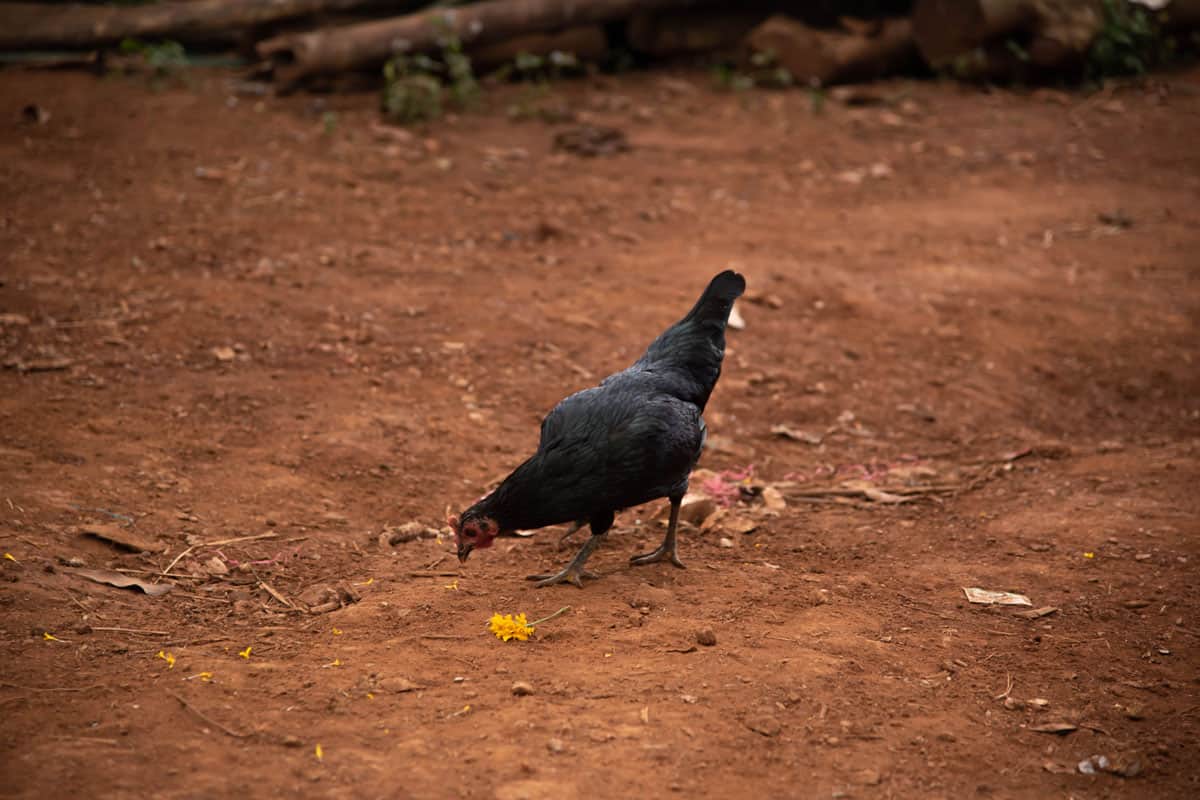 Unlike most of the other animals mentioned in this article, chickens have no problem digesting any kind of marigold! In fact, some people feed their chickens African or French marigolds to help their egg yolks turn a darker, more appealing shade of orange.

Chickens also benefit from the flavonoids and carotenoids present in marigolds. These strong antioxidants help them destroy free radicals that could cause disease in their bodies. Plus, marigolds help reduce the cholesterol found in eggs, making them healthier for the people who consume them. 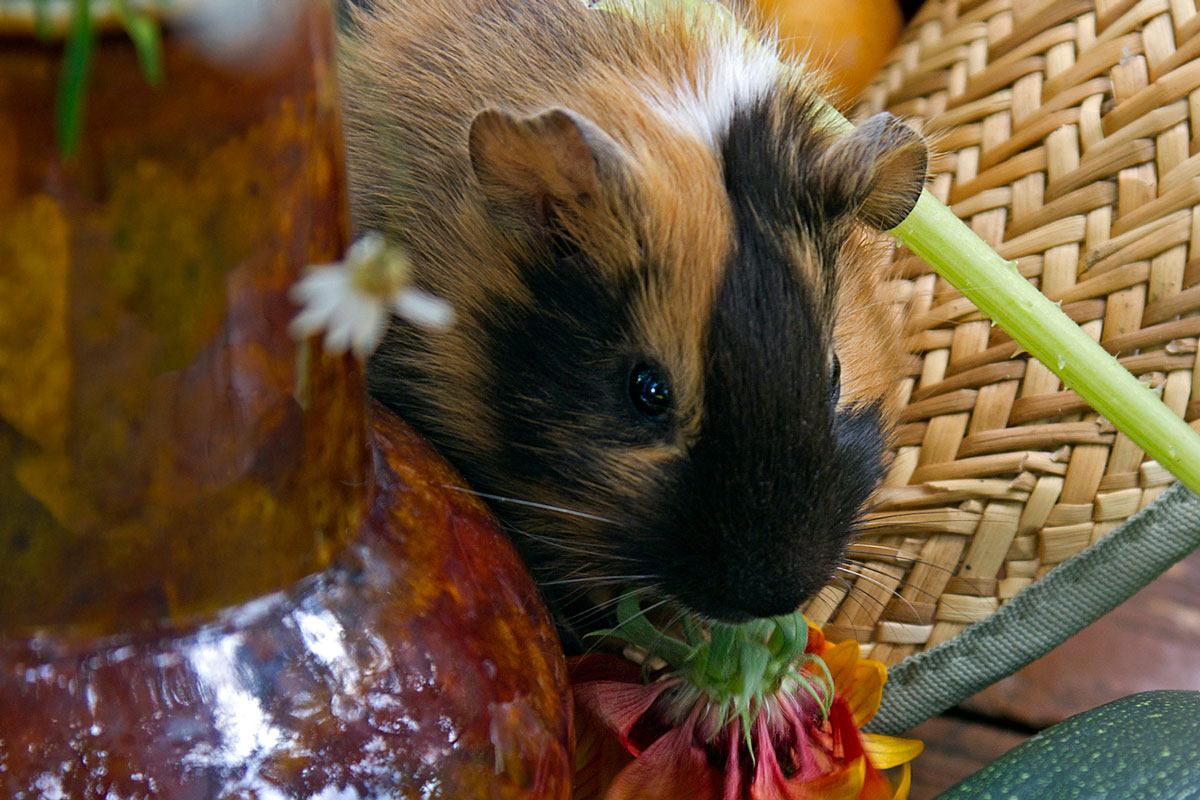 Pot marigold is a great treat to give guinea pigs to help support their immune system and add fiber. In general, guinea pigs prefer the actual blossoms over the stronger-tasting stems and leaves. The blossoms can be fed either fresh or dried and as an occasional treat rather than an integral part of the diet.

Reports of whether it's safe to feed guinea pigs African or French marigolds is mixed, so to be safe, steer clear of any marigold from the tagetes genus. Since these marigold varieties cause problems for most other mammals, it's likely that guinea pigs would find them irritating as well.

What Marigold Varieties Are Edible? 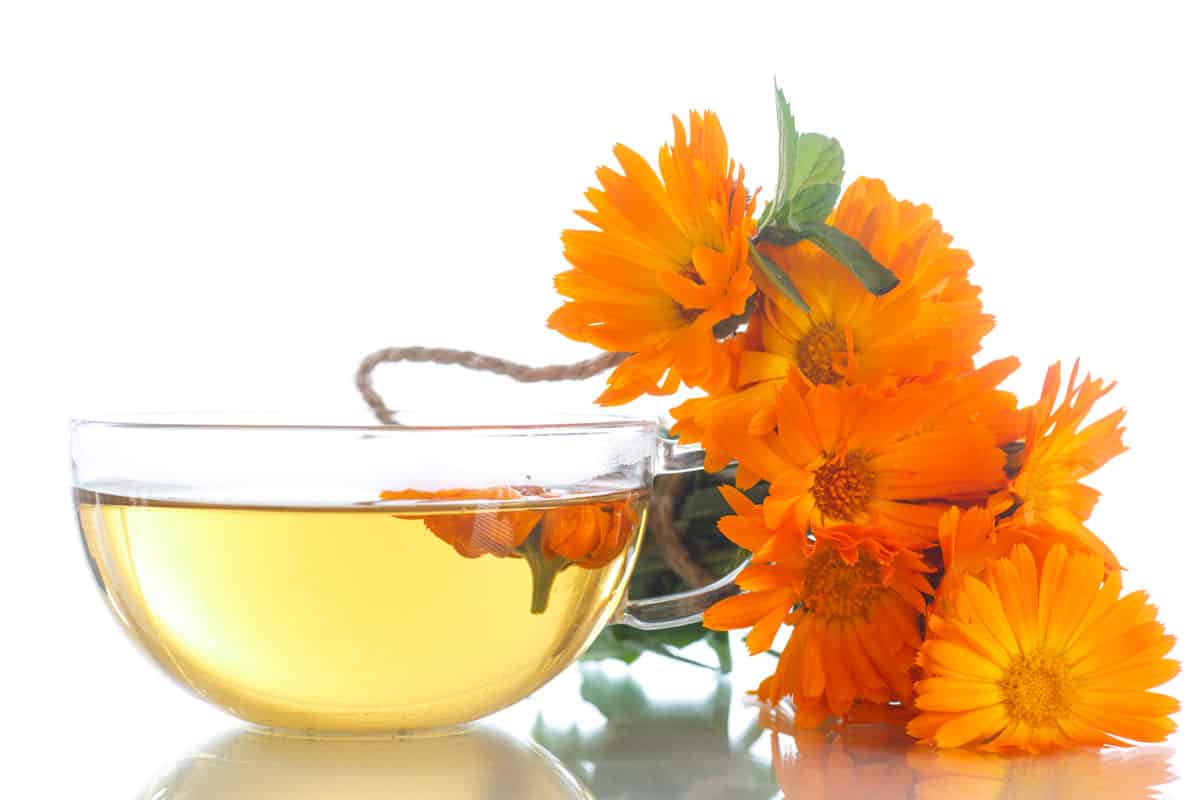 Most marigolds cause such mild reactions that they are considered safe to eat, and they can add a delicious touch of color to your food. Some varieties are less toxic than others, however. Some safe-to-eat marigolds are:

As its name suggests, lemon marigold has a citrus flavor. Mexican mint marigold tastes like tarragon, while pot marigold is earthy and floral. Irish lace marigold has licorice-flavored foliage, and the other varieties have a tangy, peppery, astringent flavor.

With such a variety of tastes, marigolds can be used with a wide variety of dishes from ice cream to fish. You can make it into a tea, use it as a salad topper, or candy the petals in sugar. It can also be used as an affordable saffron substitute.

Can You Eat All Parts Of A Marigold? 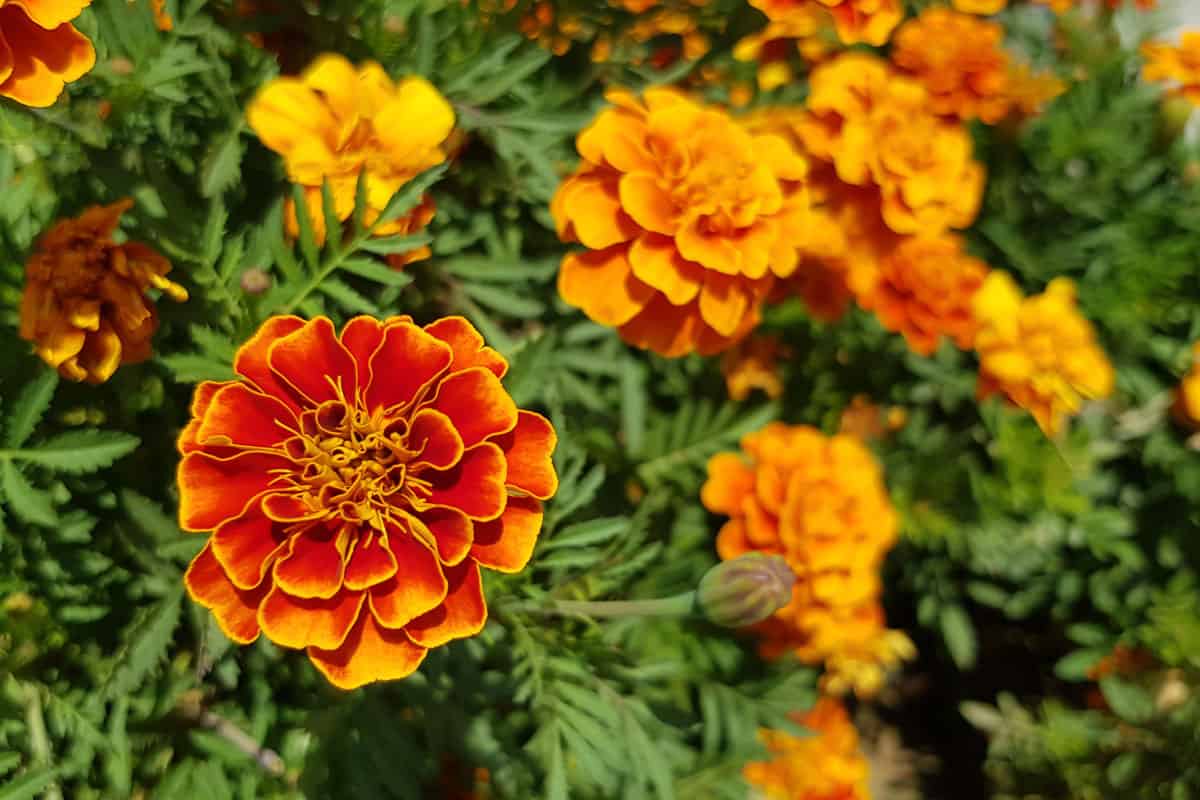 Marigold flowers are most commonly eaten, but you can also eat the leaves. When preparing flower petals for consumption, make sure to remove the white "heels" from the end of the petals. They give the otherwise tasty petals a bitter flavor.

Since the leaves become more bitter with age, they're better when they come from young plants. Or, you can blanch them before eating to remove some of the bitterness.

But in general, the flowers taste much better than the leaves. Irish lace marigold is the exception to this rule. It has very small blossoms, but its abundant foliage tastes like mild licorice. 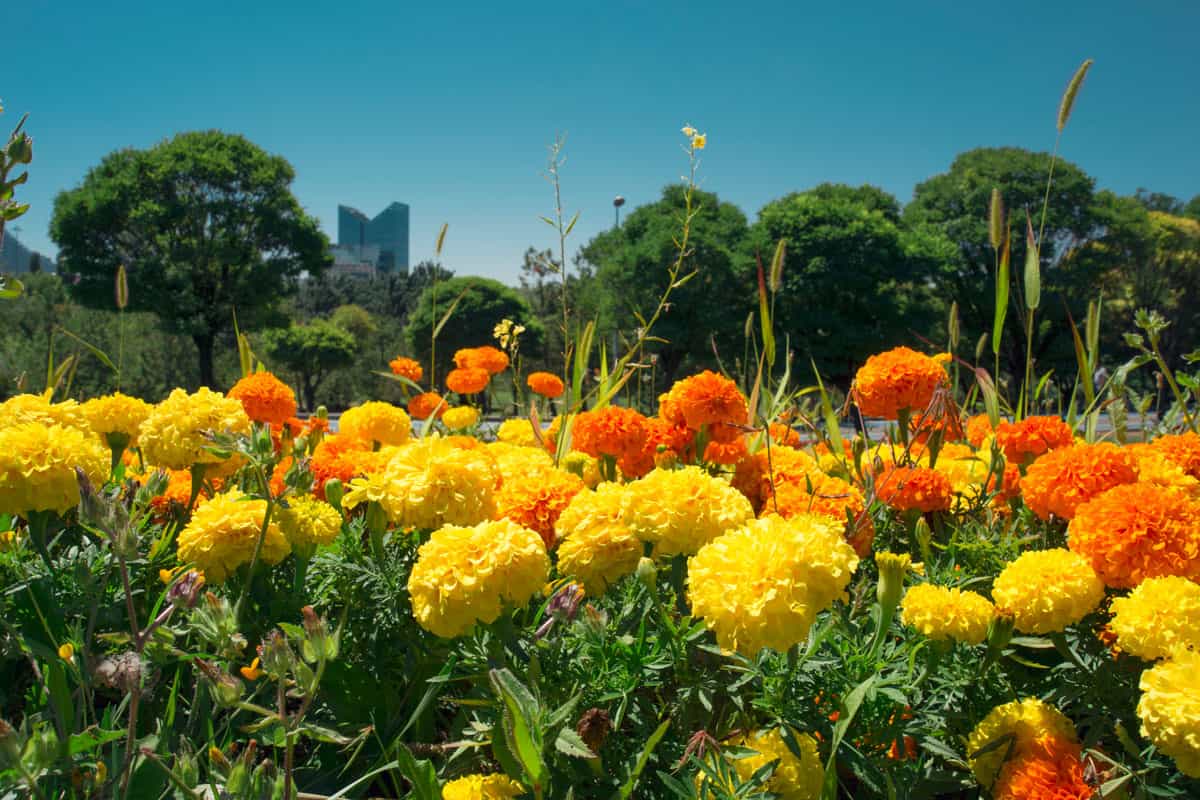 Although African and French marigolds are mildly toxic to humans, all marigold varieties can be safely consumed.

However, marigolds from the tagetes genus are mildly to moderately toxic for dogs, cats, rabbits, and guinea pigs, and should be avoided. Chickens, on the other hand, can eat any marigold variety with no ill effects.

Before you go, be sure to take a look at these related posts:

Are Marigolds Drought Tolerant [& Should They Be Watered Daily]?

Are My Marigolds Perennial Or Annual? [Breakdown By Type]