Because of their evergreen foliage, liriope is frequently utilized as a groundcover in gardens. You're not the only one who wonders when to mow this plant or if it can be cut back. Many people are unsure about how to handle it. That's why we searched the internet for answers and here is what we found.

Liriope should ideally be divided in the early spring before new growth has started again. However, this plant can be effectively divided later in the growing season due to its hardiness. Additionally, if you want to cut your liriope, you can trim it back in the early spring.

Keep reading as we give you a guide on how to cut back your liriope. We'll also talk about how and divide and transplant a liriope. In addition, we'll also cover what are the most common varieties of these plants, how to properly care for your liriope, and what problems you might encounter. 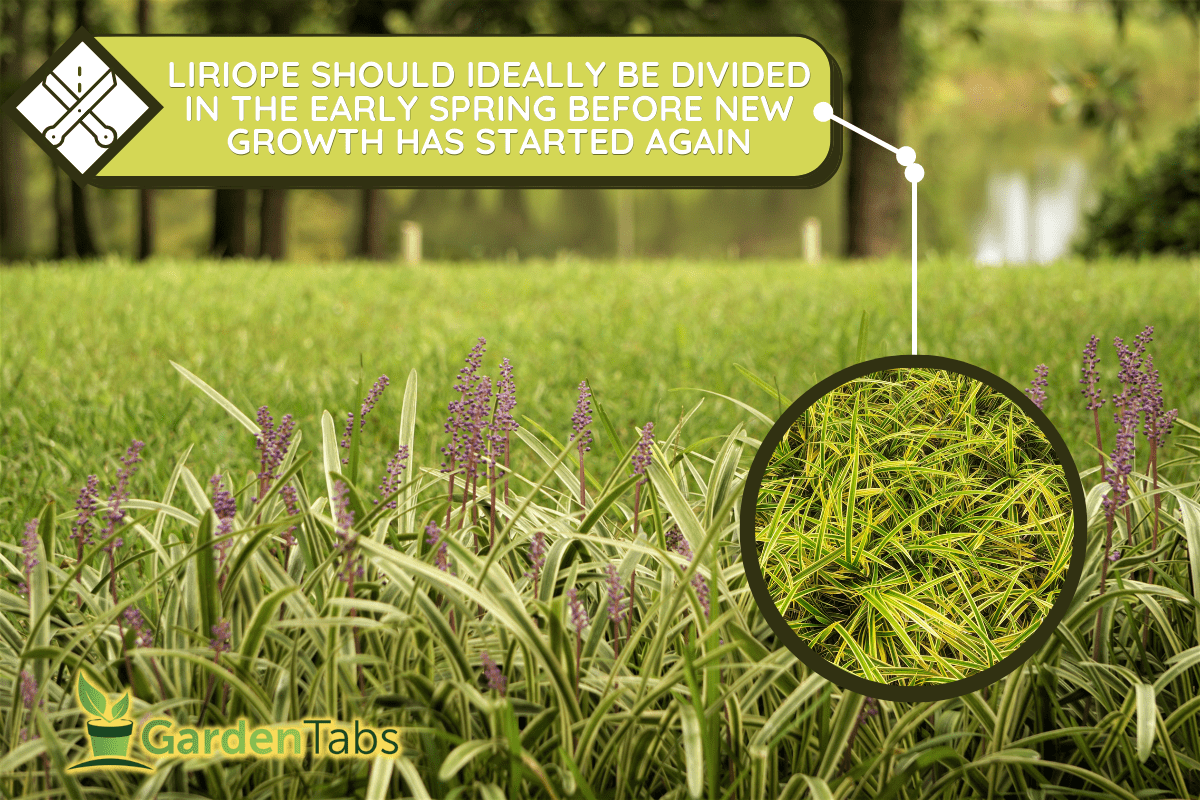 Why The Need To Cut Back Liriope? 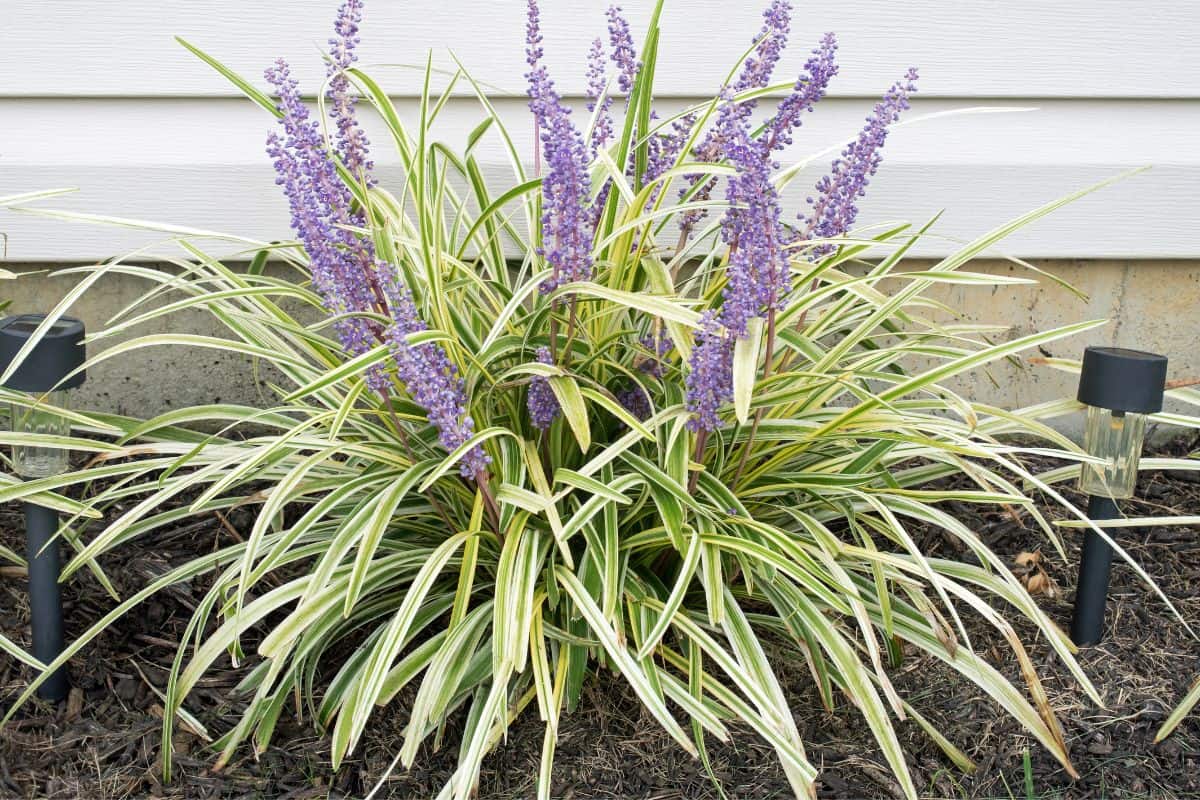 If you don't regularly trim the liriope, it won't take over the entire garden, but improper cutting can impair the growth of the plant the next year.

In your garden, the old leaves will wither away and leave behind unattractive brown tendrils between any new growth. In addition to removing the old, dead shoots, pruning the plants back well towards the conclusion of the growing season will promote future growth.

Liriope can spread into areas that you don't desire if you don't routinely cut them and cling onto their old, dead leaves.

How To Cut Back Liriope?

There are two ways to cut back liriope depending on where they are situated in your garden. You can trim it using a lawnmower if it is a large liriope planting. On the other hand, hedge trimmers are simpler to use for border accents or edging.

The process is quite straightforward. Make sure the mower blades are set to the highest level before cutting any liriope.

The crown of each liriope, or the area just above the soil level from which new leaves sprout, is what needs to be protected from lawn mower blades the most. Setting the blade cut at a height of 3 to 4 inches will protect the crown of the plant.

Use the hedge clippers as if they were a huge pair of scissors. While on your knees, firmly grasp the trimmer grips and insert the blades 3 to 4 inches above the crowns of the leaves.

Keep the blades horizontal and perpendicular to the ground as you cut. Otherwise, the cut plants would appear prickly and uneven.

Pro tip: Before operating the mower or trimmer on healthy plants, wipe the blades with a mixture of 1 part household bleach to 9 parts water to prevent the spread of anthracnose.

How To Divide Liriope?

Increasing the number of plants in the garden or constructing new flower beds is incredibly simple and affordable when done by dividing liriope. 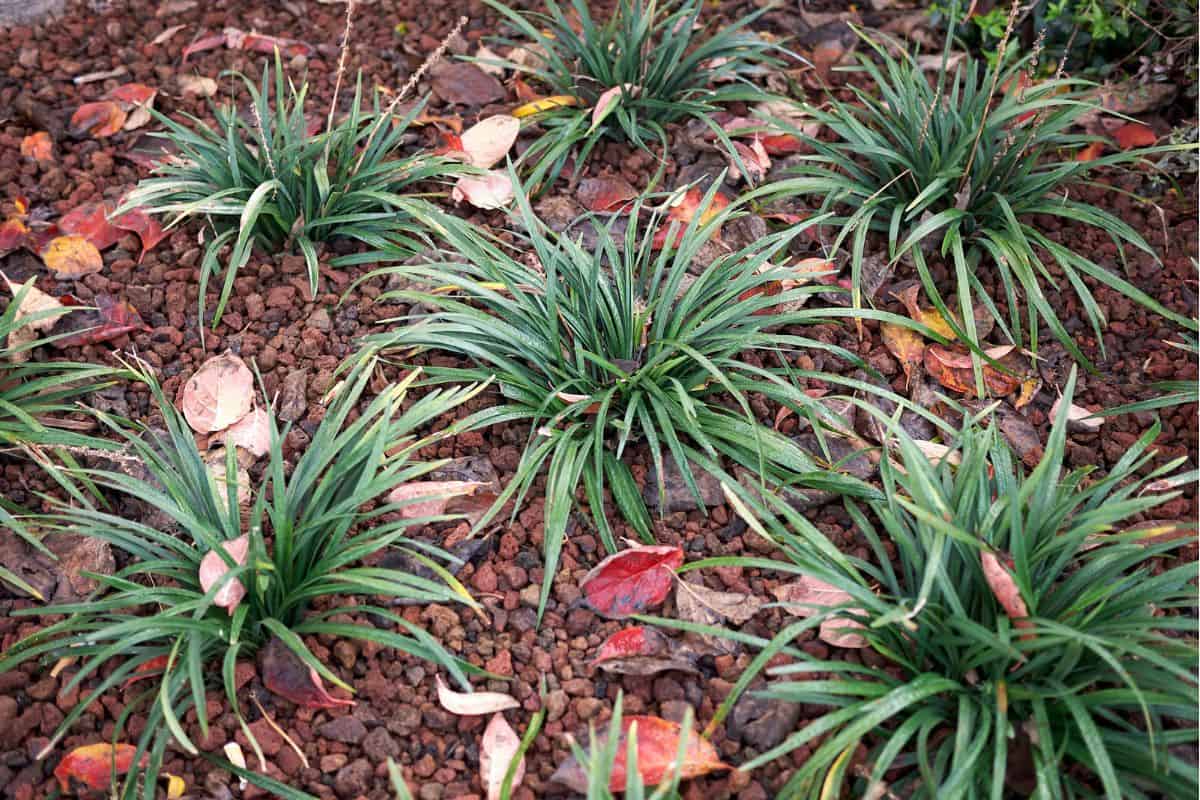 Plant division for liriope is quite simple. You can follow these easy steps:

What Liriope Varieties Are Commonly Used In Gardening?

Listed below are the two most common varieties of liriope that are usually cultivated. 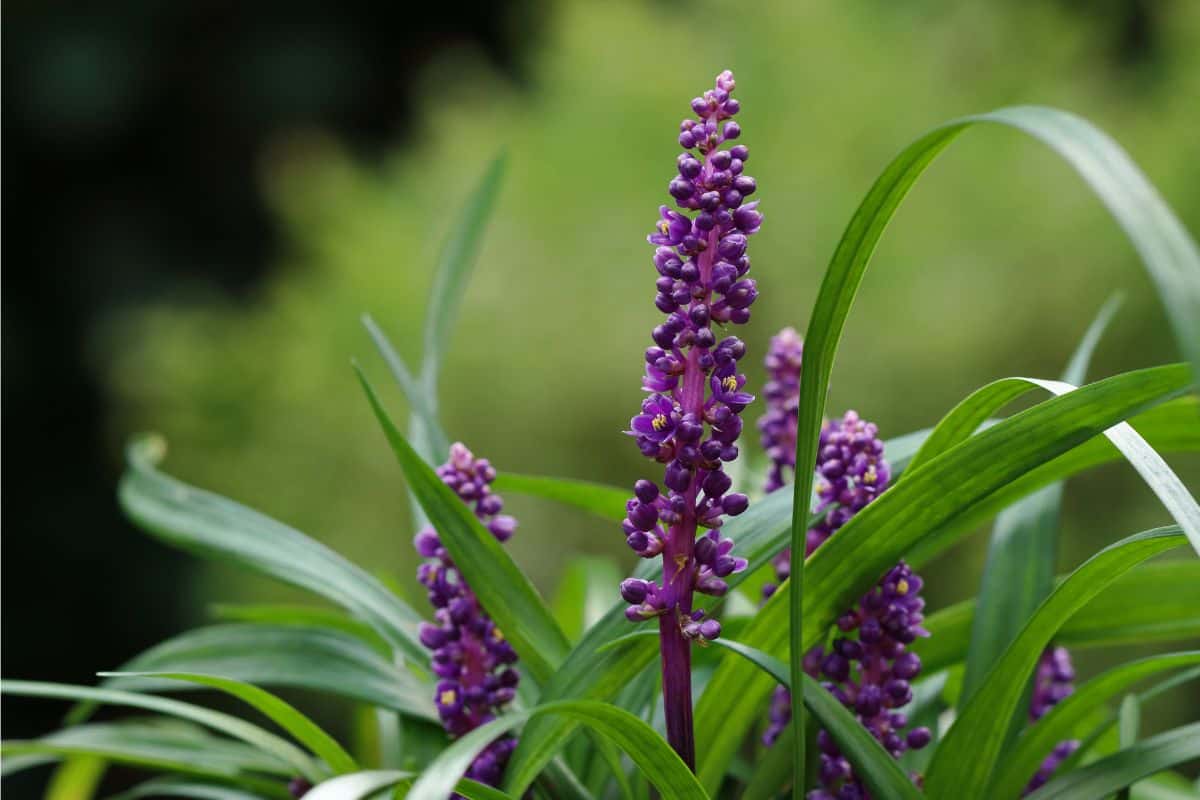 Also known as common lilyturf, grows to about a foot tall and is hardy in zones 6–10. The named varieties include: 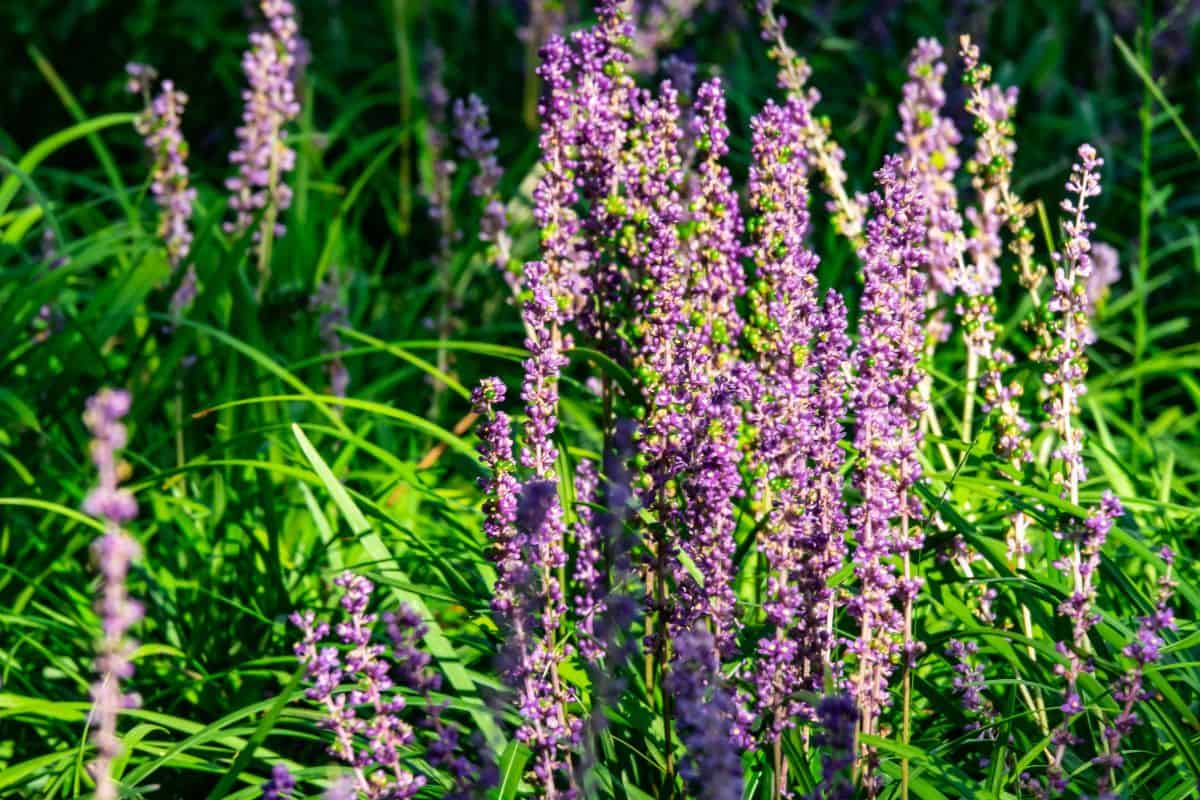 Often known as creeping lilyturf, can withstand full shade better than typical lilyturf and can survive in USDA zones 4 or 5. It spreads more quickly and has smaller, thinner blooms and leaves.

Can You Plant A Liriope Indoors?

Since ancient times, lilyturf has been used as an outdoor bedding plant. This hardy perennial that resembles grass makes a superb ground cover for border gardens and partially shaded locations.

However, because of its appealing textured leaf, constant color, and ability to withstand neglect, it can also be grown in pots, either as a stand-alone plant or in sizable mixed containers.

It is a large plant that, in colder climates, is occasionally grown in outdoor pots during the summer and brought indoors for the winter.

What Are The Common Problems A Liriope Might Encounter? 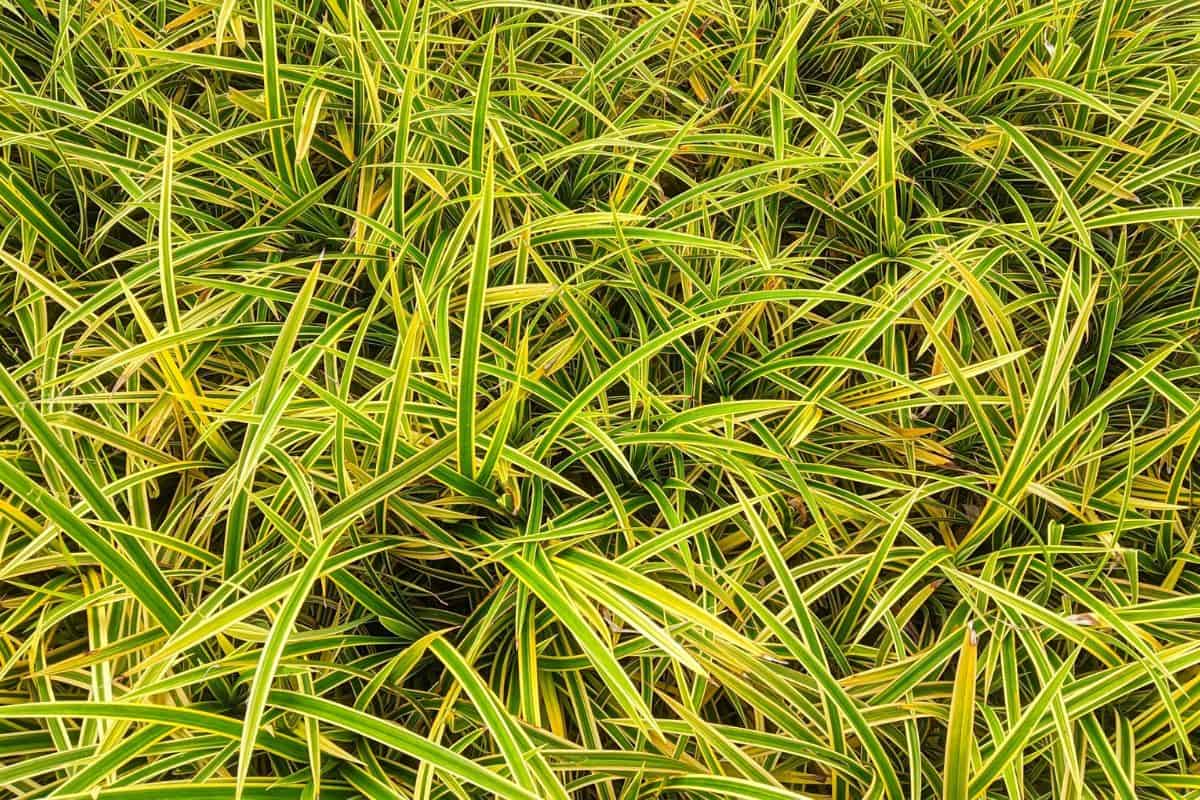 Although liriope requires little care, it is vulnerable to pests and illnesses that might be problematic. The following are some common problems with liriope:

Indoor plants typically experience browning leaf tips or margins more frequently than outdoor liriope. It is frequently brought on by a lack of moisture in the air or insufficient water supply.

To enhance the humidity around the plant, adequately water it and mist it.

An obvious indication of a crown or root rot is the presence of one or two yellowed leaves and the growth of brown or black patches at the base of the leaves.

Because of a fungus infection, the base is starting to deteriorate. If you catch it early, you can apply a fungicide and remove the rotten portion of the root or crown; but, if the entire crown becomes brown or black, the disease has advanced too far and you need to dispose of the plant.

When temperatures and rainfall levels rise in the late spring and early summer, you might see this disease spreading quickly among outdoor plants.

Root rot is not always the cause of yellowing leaves. Liriope leaves can become yellow if they are sitting in poorly drained soil. Additionally, if you expose them to too much sunshine, they may bleach and turn yellow tan.

Liriope is a favorite food of slugs and snails. They are slimy, worm-like critters that gnaw through leaves and leave a slime trail in their wake.

Anthracnose is a fungus disease that is brought on by a species of Colletotrichum and results in reddish-brown patches along leaf margins and leaf tips.

When it rains frequently or when there is overhead irrigation, this illness spreads more quickly. The foliage quickly starts to die back as a result. In winter, the fungus can survive in dead leaves.

What Factors Affect The Growth Of Your Liriope?

Here are the factors you need to watch out for when growing liriope:

Although they can handle the full sun well and can even thrive in practically complete shadow, liriope plants thrive in a site with part shade.

These plants benefit from some afternoon shade in hotter areas. The plants will grow more slowly and the foliage will be leggier in areas of deep shadow.

Although liriope may grow in a variety of soil types and weather patterns, it dislikes permanently soggy or wet ground.

Water the plants frequently, but not every day during the first growing season because this can result in wet soil. Liriope requires on average 1" of water each week.

Liriope plants may go a little longer between days of watering once they have established themselves and are reasonably drought-tolerant.

The ideal daily temperature for liriope plants is between 68 and 75ºF. Liriope will probably die back in the winter if you plant it in really cold areas. It might require a small amount of winter protection in the USDA's coldest zones.

Liriope doesn't require a lot of nourishment to survive. However, it may benefit from a single application of organic plant food or a 10-10-10 (nitrogen-phosphorus-potassium) slow-release shrub and tree fertilizer in the early spring.

Per plant, no more than 1/4 cup should be used. Fertilizer will speed up its growth and perhaps promote spread.

The best time to trim and cultivate your liriope is during early springtime. Although these plants don't require such heavy maintenance, it is still best to control their growth by cutting them back.

Additionally, even though dividing liriope is not required as part of routine maintenance, some growers may find it advantageous to do so.

Check out these other articles on this page if you enjoyed this post: