One of the easiest vegetables to grow in your garden or potatoes. Potatoes are generally low maintenance vegetables, and they are super fun to plant and enjoy after being harvested. But how do you know when potatoes are ready to harvest? We have researched potato growing practices, and in this post, we will share this information with you.

The main thing to remember when growing potatoes is to pay attention to the plants and the soil. If you notice any anomalies, it's essential to address them immediately to prevent them from affecting the harvest. Continue reading to learn more about when and how to harvest potatoes. 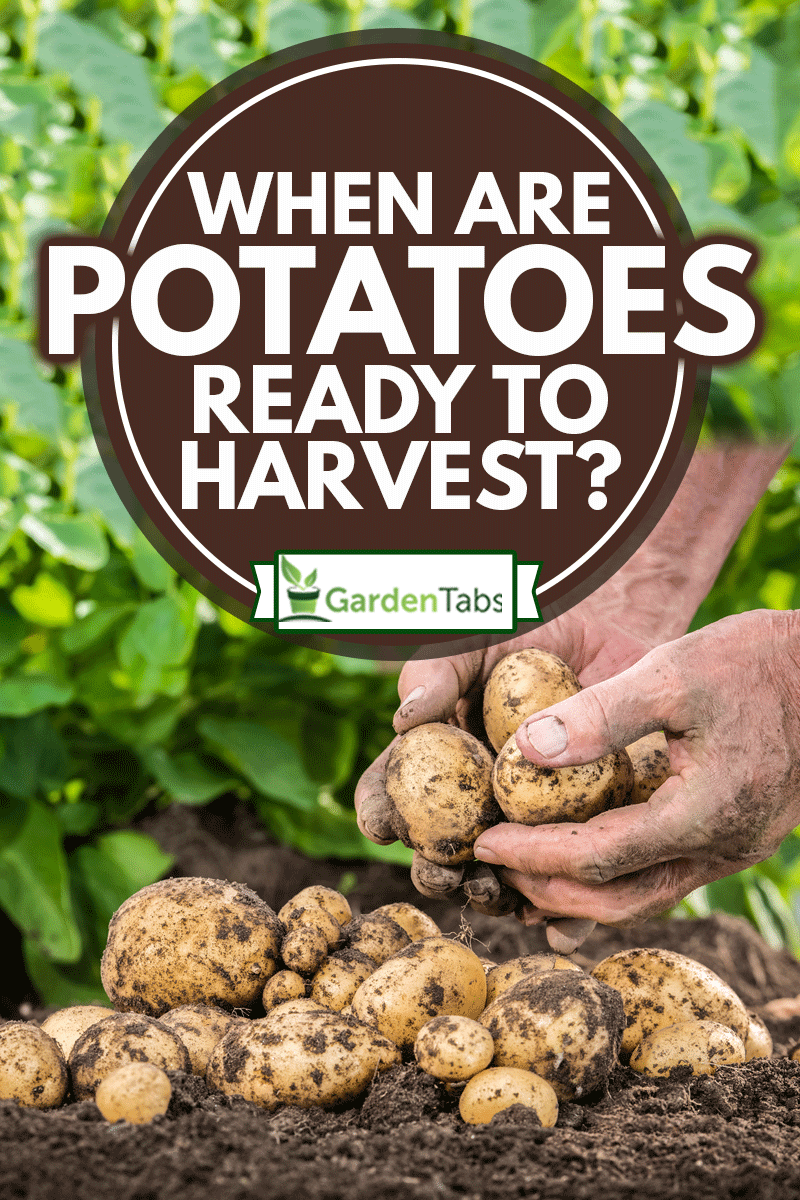 When To Harvest Potatoes 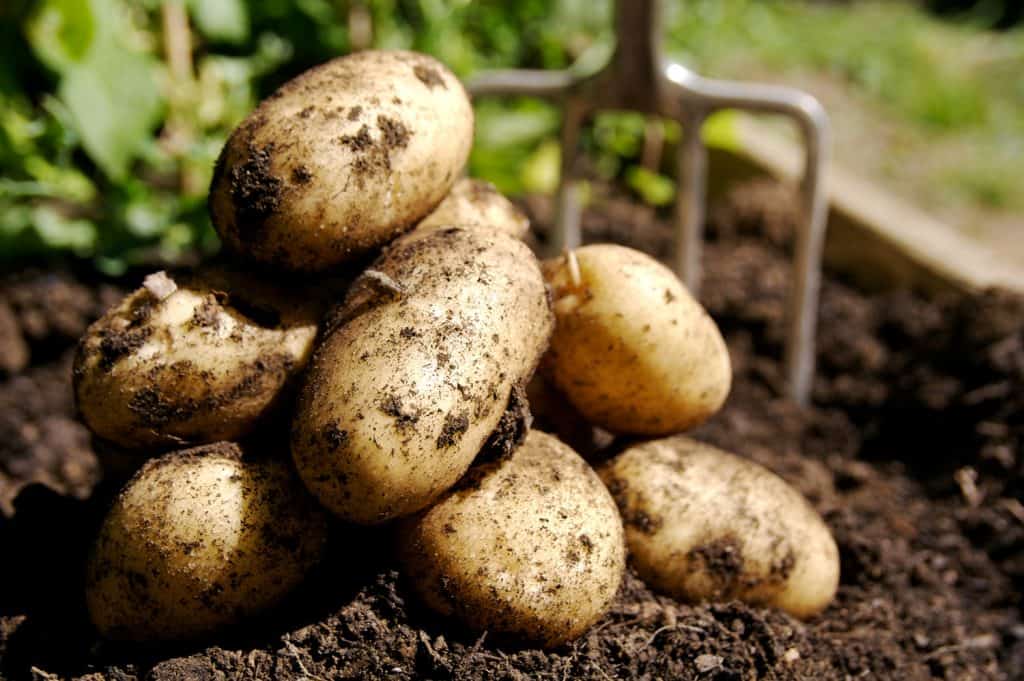 First, early potatoes typically require anywhere from 70 to 90 days to reach their harvest date, usually around June to July. You'll usually find the potatoes grown by farmers living in southern regions where the temperature is typically on the warmer side. Common varieties include Arran Pilot, Red Duke of York, and Lady Christi.

These mid-season potatoes can take anywhere from 90 to 140 days to reach their full harvest. They're typically planted around the first day of spring until the first couple of weeks in April and can be dug up anywhere from July to September. These potato varieties are usually grown by farmers who live in regions with mid-range temperatures. Common varieties include Jazzy, Nicola, and Maris Peer.

Also referred to as late-season potatoes, these varieties can be ready for harvest anywhere from 130 to 150 days from their plant date. If you live in a Northern or Eastern region in the US, these may be the potatoes to grow in your area. They're usually ready for harvest in August and September, and common varieties include the Purple Majesty, King Edward, and Russet varieties.

How do you know when it's time to dig up potatoes? 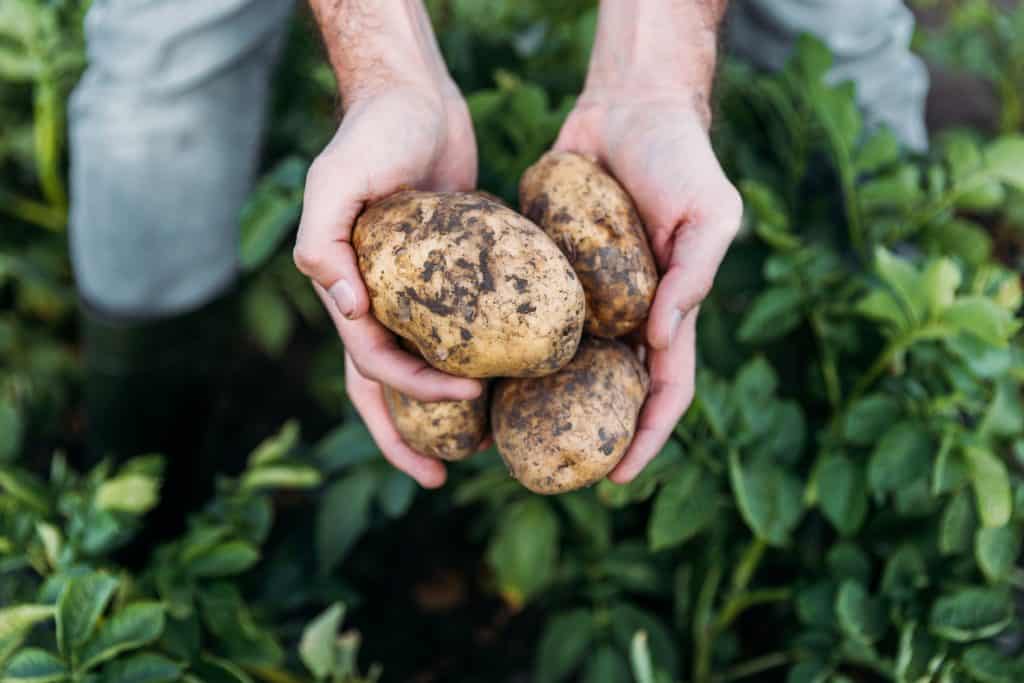 Keep an eye on the calendar

If you're planting seed potatoes, it'll be anywhere from 80 to about 120 before they're ready for harvest. Use this as a guideline to determine when the potatoes will be ready and be sure to account for external factors such as rainfall, climate, and soil conditions. Consider marking down the date that you planted the potato and then mark the estimated maturity date. It's also a good idea to begin checking the potatoes a week or two ahead of the maturity date, just in case you need to harvest them early. This can help prevent the skins from slipping when you do try to harvest them.

Check the plants for readiness

Carefully dig up a shell of potatoes using a spading fork. Pick up a few tubers and run your fingers over the skin. If the potato's skin rubs off very easily, the vegetable is not ready to be harvested. If this is the case, carefully place them back in the dirt and cover them. Leave the crops in the ground for a few days and then check them again using the "finger rub" method.

Check out this spading fork on Amazon.

Take a look at the vines on the potatoes and inspect their condition. If the vine is drying out and turning brown, this is a big sign that it's time to harvest a potato. It's best to let your potatoes grow until the vines die to ensure that they have reached full maturity. That being said, it's always a good idea to dig up a few potatoes to check them for readiness first before harvesting all of the crops.

You don't always have to wait until the potatoes are fully mature before harvesting them. You can dig up immature potatoes called "new potatoes." You can harvest these potatoes once the tubers begin to form and have a diameter of at least an inch or more. This is generally anywhere from two to three weeks after the potatoes have flowered.

How deep do potatoes grow in the ground?

Typically, potatoes are planted about 4 to 8 inches deep in the soil, depending on the type of potato you're growing. However, the roots of the potato plant can go down as far as 18 inches into the soil.

Can you harvest potatoes too early? 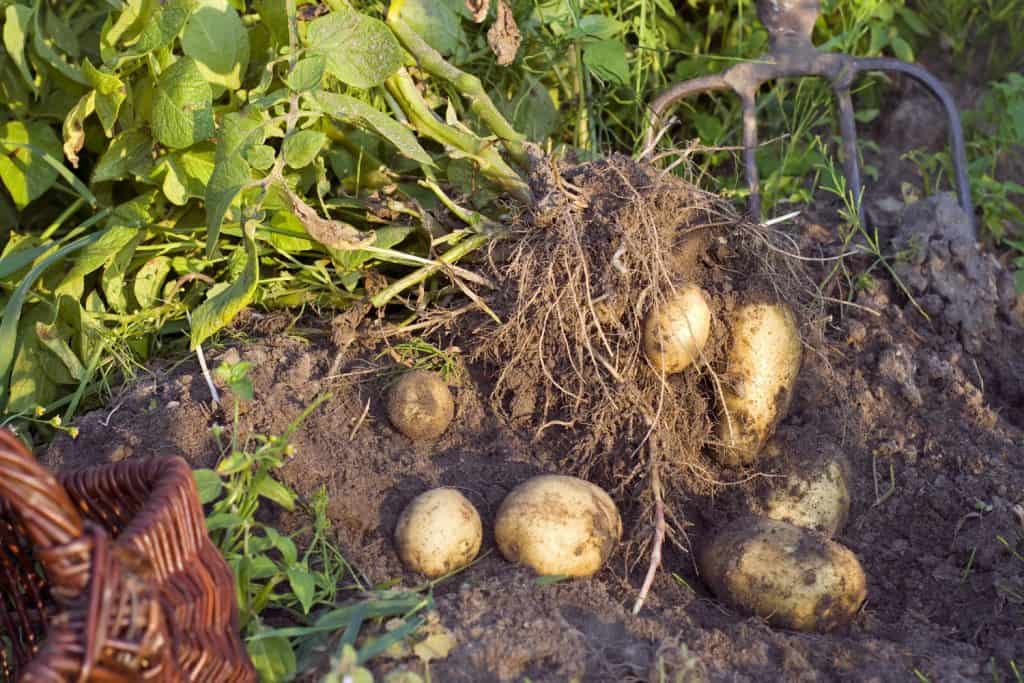 If potatoes are harvested too early, they'll typically be on the smaller side. The potatoes don't necessarily have to have flowers to harvest them. You can dig the plan up before it has flowered. However, it's important to know that the potatoes may not have any meaningful size at this point in their growth stage.

The flowers aren't necessarily needed for the potato plant to grow tubers beneath the ground. However, if you don't see any flowers wait for the foliage on the plant to dry up and die before harvesting the potatoes. This is a sure sign that the potatoes are ready.

How long can potatoes stay in the ground?

Potatoes can stay in the ground anywhere from two to four weeks after their harvest date. However, this is only if you have no animal or pest infestations such as field mice, ground squirrels, or moles. Leaving the potatoes in the ground longer can make the skin more slippery, which can, in turn, make them more difficult to remove.

Also, if the potatoes are left in the ground during the colder months, they can be more difficult to remove and may be exposed to frost, which can cause them to rot.

If you plan to leave the potatoes in the ground after digging them, be sure not to leave them in the sun for too long, as they may turn green. Always make sure to cover them back up with dirt until you are ready to dig them up completely. You can use a garden shovel to quickly cover the potatoes with dirt.

Check out this garden shovel on Amazon.

Do potatoes keep growing after the plant dies?

No. The livelihood of a potato is completely dependent on its plant. If the plant of the potato dies, the potato will not continue to grow or produce tubers. A plant dying back is the biggest sign that the potato plant is ready to harvest unless the plant has encountered a disease that has caused it to wilt and die. In which case, the potato will likely become infected and die as well.

Can you eat potatoes straight out of the ground? 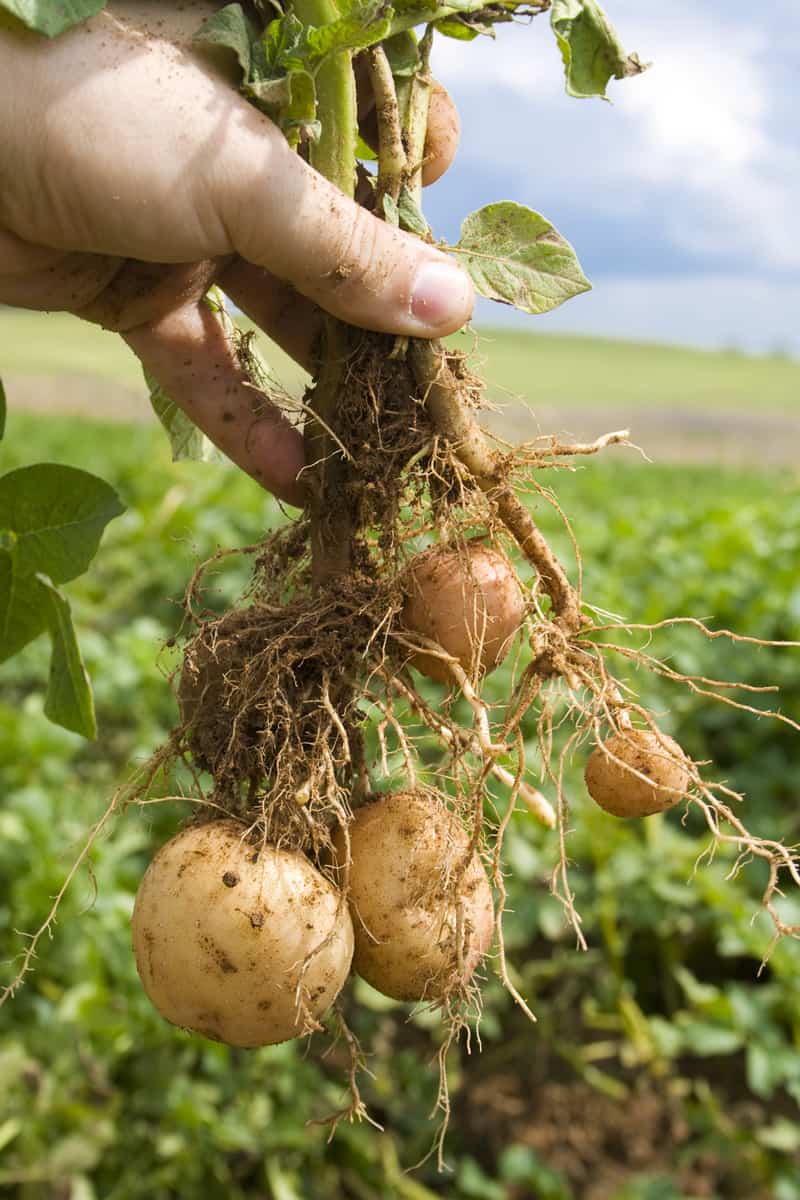 No. Potatoes need to be cured after they are harvested and before they are eaten. Curing the potatoes causes the skin to thicken and prepares them for storage. Eating potatoes right out of the ground can be especially hard on your teeth, as they are root vegetables that will generally need to be softened to make them more edible for human consumption. Secure the newly harvested potatoes, brush off any remaining dirt and store them in a high-humidity environment that's anywhere from 45 to 65 degrees Fahrenheit for about ten to fourteen days.

What can I do with my potatoes after I dig them up?

We hope that this post has helped provide you with guidance on recognizing the signs that potatoes are ready for harvesting.

Before you go, be sure to check out our other posts:

Can You Compost Pasta, Potatoes, And Other Starches?