It is possible to enhance the spread of limbs on a weeping pear tree by trimming it. This will allow more sunshine to enter the tree's core. But when and how should a weeping pear tree be pruned? Luckily, we've extensively researched these questions and have the answers below!

The end of winter, just before new shoots start, is the best time to prune a weeping pear tree. Start pruning the young tree to maintain its shape and foster the growth of sturdy, evenly-spaced branches.

These trees should be thinned in the summertime, and any suckers that sprout from the trunk should be cut off. Here's how to do this:

The weeping pear tree will enhance the splendor of the yard in the spring with its spectacular hanging branches. Although this tree can flourish with little attention, pruning is still necessary annually, particularly if the limbs are beginning to reach the ground. Continue reading for more information! 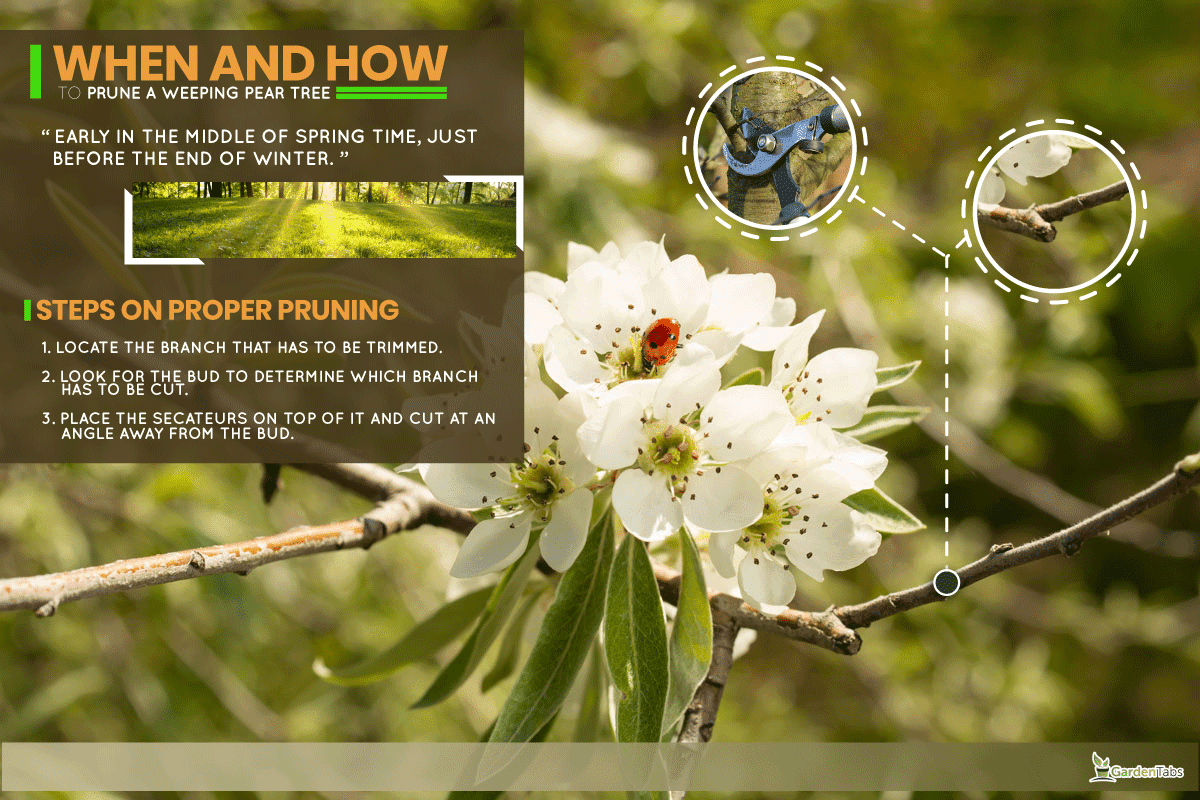 When Is The Best Time To Prune A Weeping Pear Tree?

Early in the middle of springtime, the weeping pear tree's blossoms and foliage will begin to emerge. Additionally, the tree in the summertime bears unpalatable fruits, which are small and green in color.

Due to the weeping pear tree's seasonal nature, its green leaves gradually drop off during the fall, leaving only its limbs by winter. The recommended time to prune blooming shrubs and trees is in their dormant state, similar to other shrubs and trees.

Late winter is the ideal season for pruning weeping pears since nothing obstructs or hinders the work, such as blossoms, fruits, or foliage.

When all that's left are the branches, you can quickly identify whichever sections are crossing one another and quickly cut those off.

Pruning allows you to design your tree to have the appearance you would like because no foliage hinders your eyesight.

Furthermore, pruning during the winter means you won't have to gather any fallen leaves or blooms from the ground. 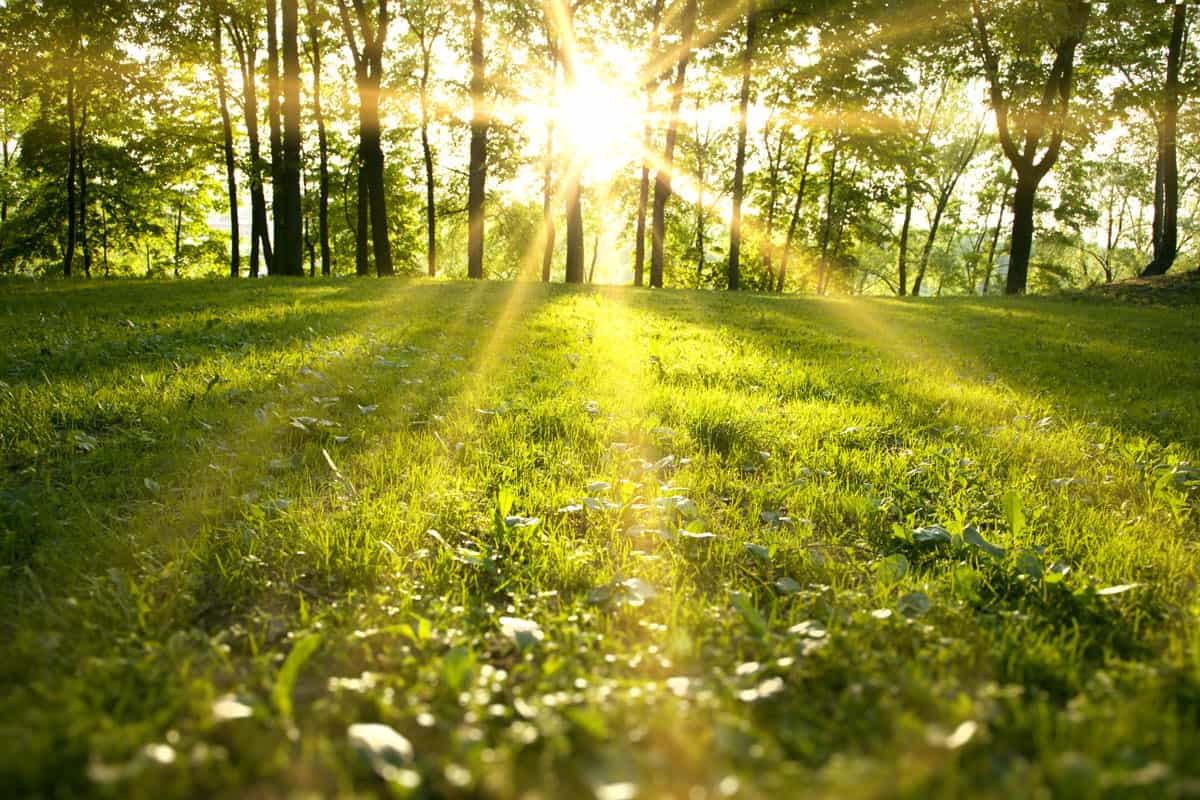 The Pyrus salicifolia, or the weeping pear tree, is also referred to as the willow-leaved pear or weeping silver pear. It features silver-gray leaves that resemble willow leaves, little uneatable fruits, white blooms, and a semi-weeping appearance.

The main strength of the weeping pears tree is its delicate weeping limbs. Those features, with their white blossoms and silver-gray leaves, give it a unique beauty.

One benefit of pruning a weeping pear tree yearly is that you can design the bush to have the appearance you like.

Pruning promotes fruit yield and profuse flowers while warding off bugs and other animal diseases that might destroy your tree. Additionally, it encourages the tree to generate fresh, beautiful, healthy foliage and gives it a tidy appearance. 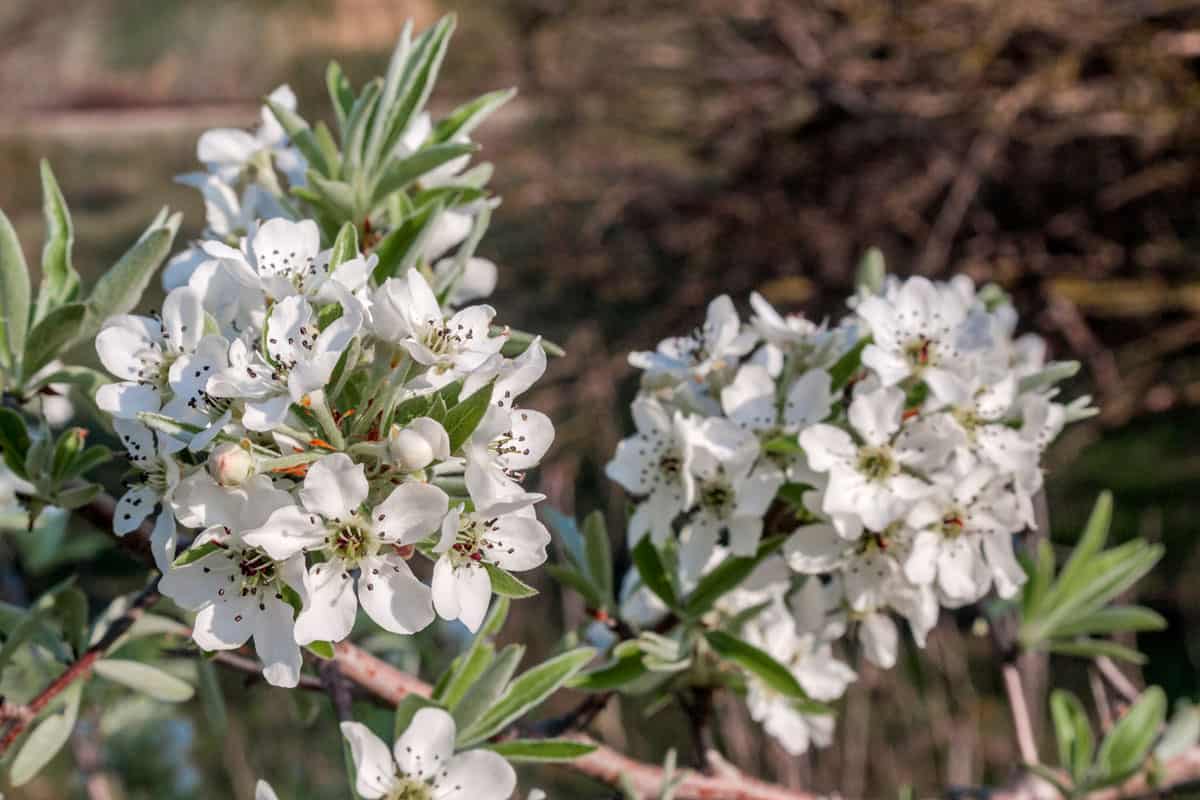 How Should You Trim A Weeping Pear Tree?

Wintertime trimming is a simple process for weeping pear trees.

Before tackling the lifeless and hazardous limbs, remember that you have always had the appropriate instruments, such as sharp secateurs or trimming shears. Use caution when using the tools. 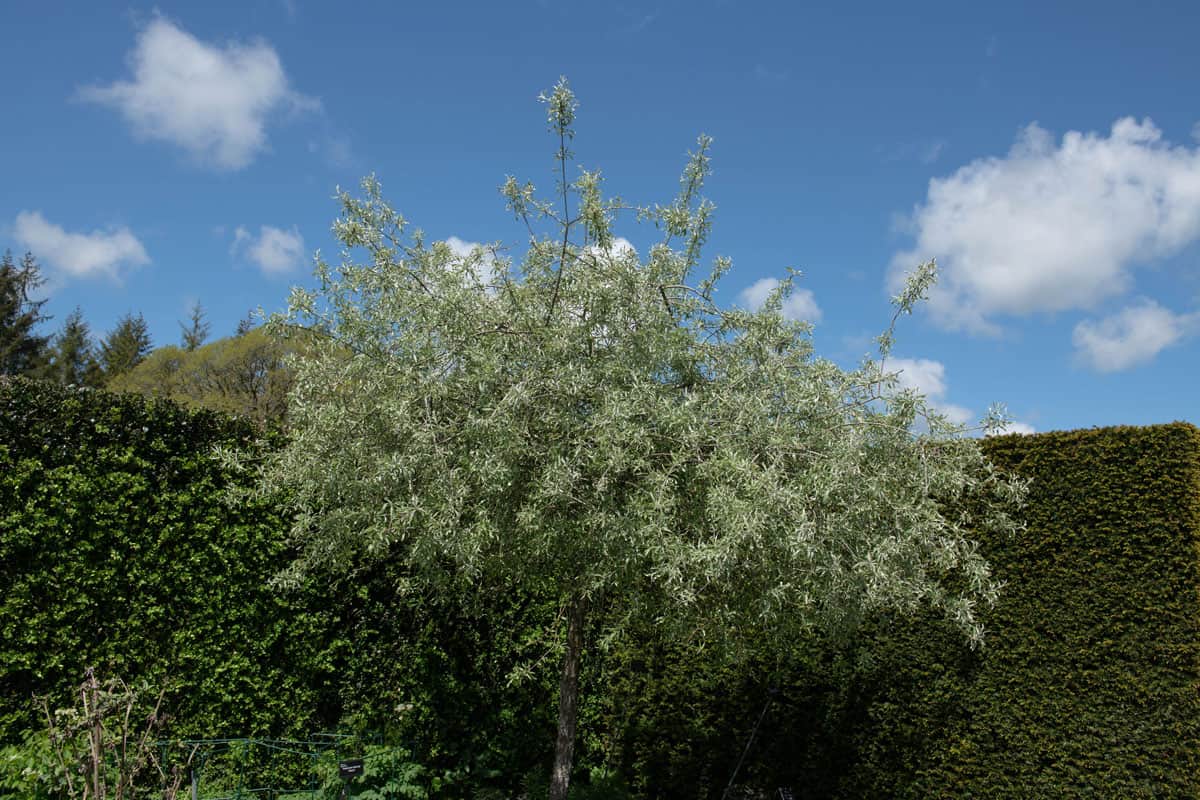 Always begin trimming at the top, keeping the weeping pear tree's regular shape in mind as you go. The instructions for doing it are listed below.

Check out this running shear on Amazon.

Here's a video on how to prune your weeping pear tree from YouTube:

Other Varieties Of Ornamental Pear Trees 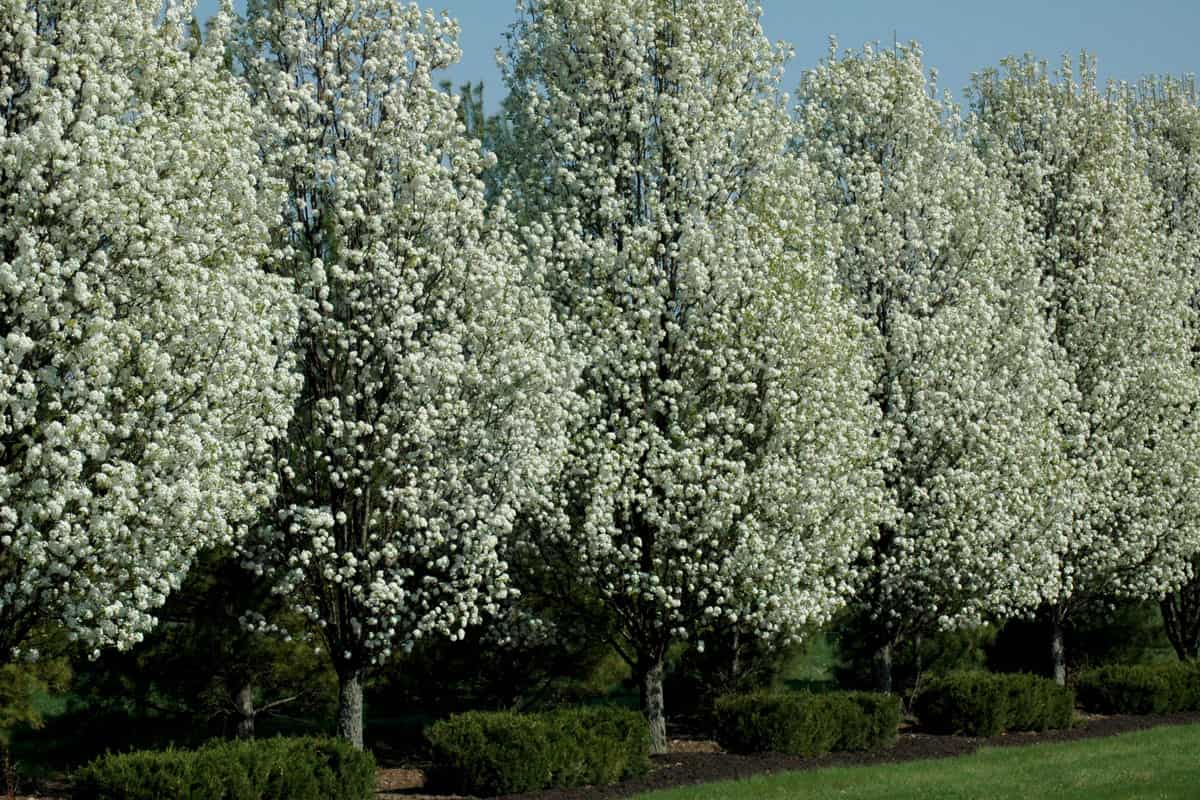 Other ornamental trees exist in addition to the weeping pear tree. The spring flowers and vibrantly colored autumn leaves of ornamental flowering pear trees are relatively easy to maintain since they do not produce fruit.

This tree is deciduous, has dark to medium-green leaves, and the trunk is wrapped in light green to dark brown bark. Ornamental pears grow well in direct sunlight and a wide range of soils.

They tend to favor soil moisture but can stay alive in hot and dry environments.

The Chanticleer pear is a Chinese ornamental pear tree. It is also known as the ornamental pear "Select" or "Cleveland Select." It is a deciduous tree that retains its beauty all year, eventually shedding its leaves in the winter.

This tree is narrower and smaller than other ornamental pear trees. It has an oval shape and is the widest at the beginning of the branches. Near the top of the tree, the branches taper to a point.

The Chanticleer pear tree's bark is reddish-brown. The tree is covered in glossy, deep green leaves in the summer. During the fall, the color changes from a purple-red to a golden-red hue.

It sheds its leaves in the winter, revealing tough outer, strong branches. From late April to early May, the tree will be covered in white blossom clusters as the chanticleer pear blooms.

The foliage of the Korean Sun pear tree is lovely and turns vibrant in the fall. This type of pear tree is also decorative and bears fruit but isn't safe to eat for humans.

Several wild animals eat its tiny fruits, and the flowering period gives a fresh, crisp white showcase of closely packed blossoms. It is a slow-growing pear tree with shiny oblong leaves that appear shortly before flowers.

Blossoms are compactly grouped, bright white, and fragrant. In the autumn, the leaves turn a brilliant red to a reddish-purple color.

Because of its short height and generally rounded shape, this tree could be cultivated just underneath transmission lines. Korean Sun pears have an alluring look that needs slight trimming.

This type of pear tree is a hardy, Callery pear variety that grows well in the United States. If you're solely interested in the blossoms and autumn appearance, this would be the variety for you.

For starters, the trees flourish so profusely in the springtime that such branches are practically invisible. The bright green leaves transform splendid tints of deep crimson in the autumn.

Autumn Blaze is a Callery pear that is dwarf in size. The tree goes stagnant in the cold season despite its size and can be transplanted.

Unlike so many, this variety has a rounded canopy, is broad, and grows fast. It is also a deciduous tree with specular highlights and turns.

Growing a Bradford pear tree could be suitable in certain circumstances, but it is essential to understand the disadvantages of flowering Bradford pears. Like most fast-expanding trees, consider this a weak, short-lived specimen for shade and ornamentation.

Knowing the drawbacks of growing this type of pear tree might very well result in you choosing an alternative specimen.

Bradford pears have a canopy with sluggish, massive branching prone to breaking in heavy downpours, strong winds, and winter storms.

Even minor storms can destroy a flowering Bradford, causing them to collapse onto the side of a road or power lines and structures.

This will not,  however, ensure that the Bradford pear tree will be a decent long opportunity to invest.

A multi-stemmed tree's branches are densely packed and could be risky if they fall or split off during a minor storm. 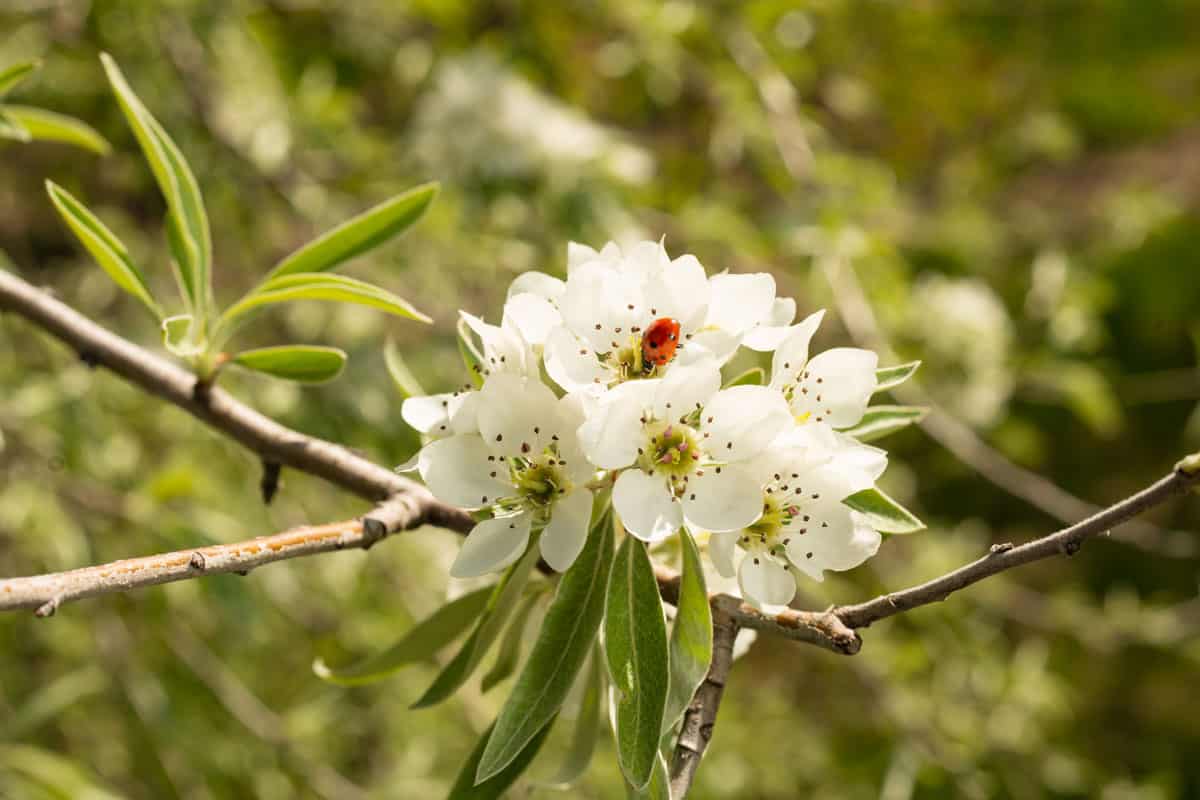 Weeping pears are a terrific decorative tree if you're searching for a new, beautiful tree that requires little upkeep for your garden or landscape. This pear tree needs a minimal amount of winter pruning for development and an abundance of spring blossoms.

Routine trimming, clearing out thick growth, removing troublesome branches, and, most importantly, knowing when and where to cut should never be disregarded.

Made it to the end? Check out these helpful related articles:

Can You Plant A Weeping Willow In Standing Water?

10 Trees With White Flowers In Springtime