Planting a new tree in your garden can be confusing if you aren't sure when/if it will lose its leaves. For example, do you want to plant an eastern redbud but have no idea when it will lose its foliage? Does this tree go through a period without leaves or greenery?

Luckily, we've done some research and have the answers to these questions below!

Since this species is deciduous, you can expect a period of dormancy through winter until spring, when the temperatures rise.

Depending on where you live, your redbud could lose its leaves later in the fall/year, while colder places may start to notice leaves changing and falling at the start of autumn.

As we start, we will cover all things growing eastern redbud trees and discuss when you can expect one to lose its leaves. Whether you're new to eastern redbuds, want to get ahead of your pruning, or need extra tips and tricks, we're here to help. With that said, let's dive right in! 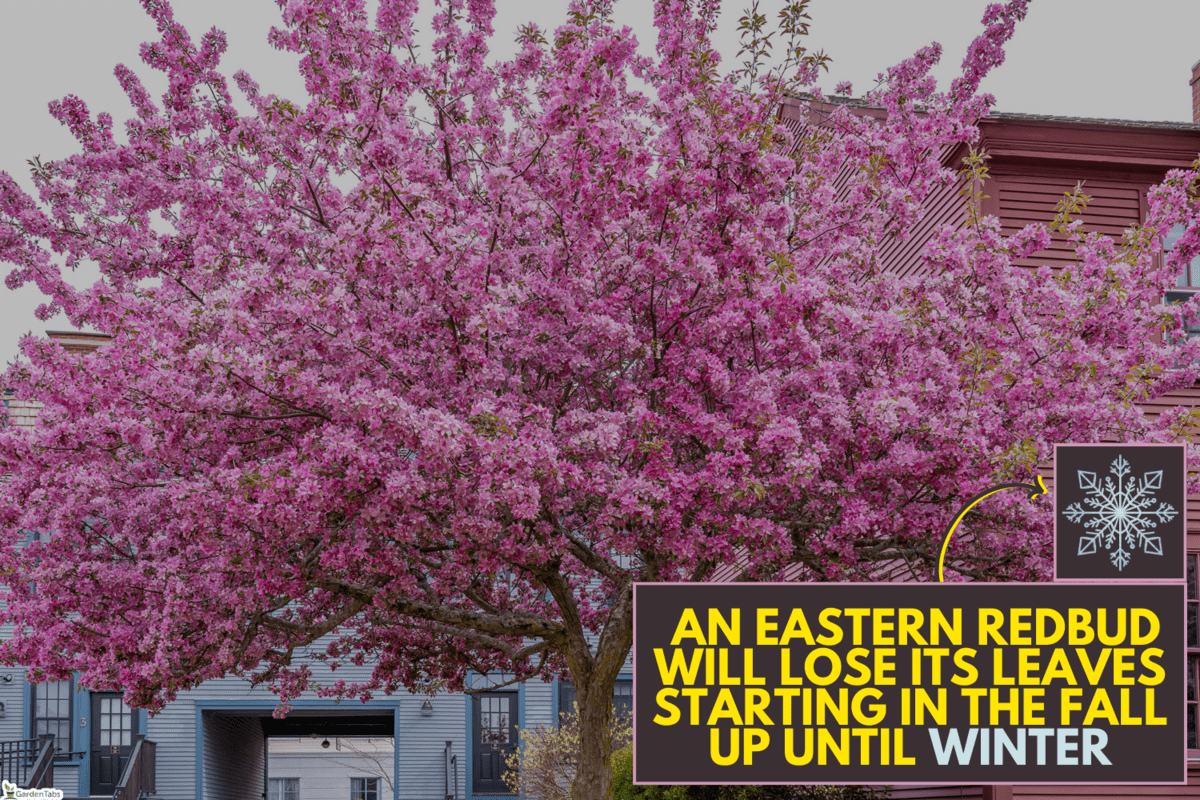 When Should An Eastern Redbud Lose Its Leaves?

You can usually expect an eastern redbud to lose its leaves during the fall. Like most deciduous trees, your redbud will shed its foliage as the temperatures fall. 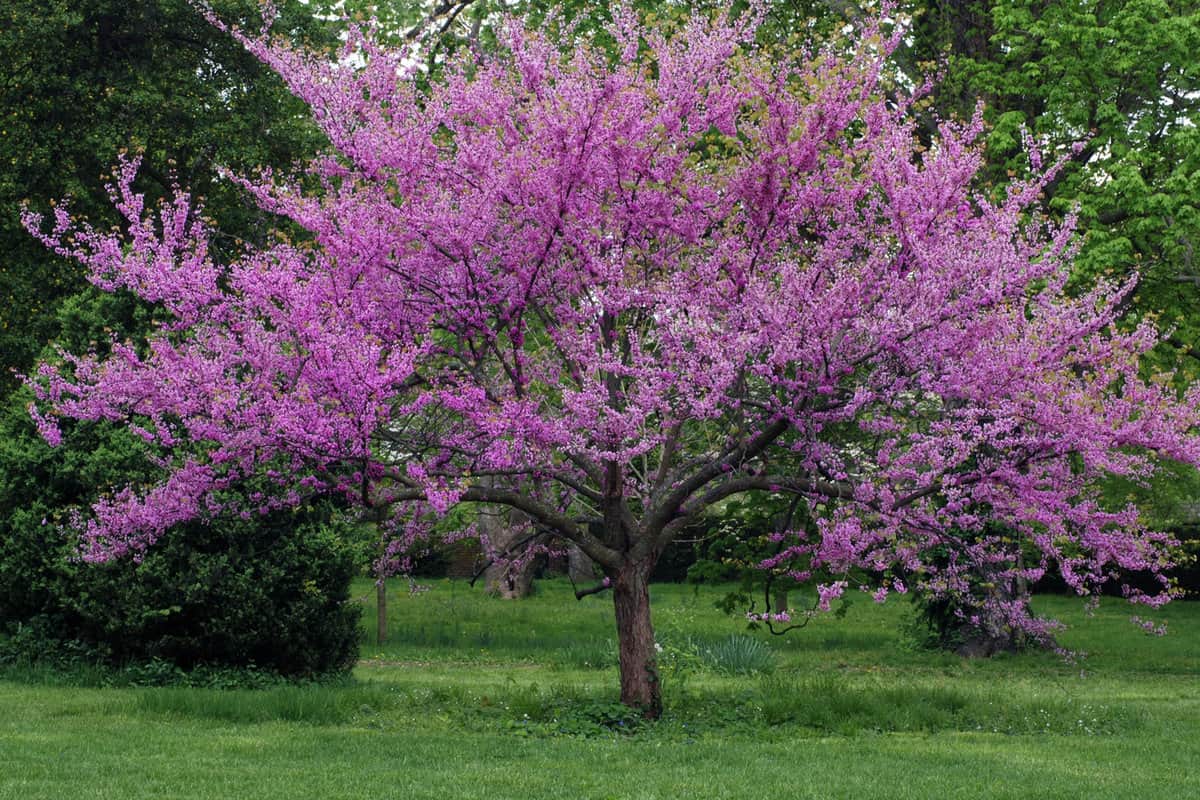 As this happens, you will see more of your tree's silvery branches, which make up for the loss of leaves in beauty. Many gardeners love the winter for redbuds because of their gorgeous bark.

In addition, your redbud may lose its leaves and flowers earlier than late autumn if there is a cold snap, so the weather affects this greatly.

Especially in cooler growing zones, some people may notice leaves start to change color and fall as early as the later summertime. However, most of the leaves will be gone by winter and should eventually leave the ground covered and your redbud bare by December.

According to Wildflower.org, a drought-stressed redbud may even lose its leaves earlier than fall and begin its winter dormancy, so try to continue watering through the summer.

Do Eastern Redbuds Keep Some Of Their Leaves During Winter?

Unfortunately, an eastern redbud will lose all of its leaves by or during winter. As we said, this species will showcase its twisting branches as the leaves fall, so that is something to look forward to.

Experts claim that most deciduous trees (maples, birch, willow, oak, hickory, dogwood, and redbud) lose their leaves in the autumn or winter. Therefore, you can expect most of your tree's leaves to die by December.

According to Awkward Botany, your eastern redbud may feature dark reddish-brown branches, and older ones will be a silver hue.

Regardless, you won't see new growth on your tree until the warm spring weather approaches, so hold tight until then! Of course, depending on where you are, your tree may show a few signs of life early in the spring rather than mid-late, so keep that in mind.

Eastern redbuds are known to be stunning with and without their foliage.

What Type Of Tree Is An Eastern Redbud?

Eastern redbud is a small deciduous tree that doesn't usually get bigger than 20 feet. These flowering trees are round in shape and tend to have a spread the same size as their height.

You may also know these trees for their stunning pinkish-purple flowers, which typically bloom throughout the spring. In the fall, you can expect your redbud to start winding down, losing its green leaves and preparing for winter.

As we mentioned earlier, the fall is typically the beginning of your tree's dormancy preparation, so expect a loss of leaves through that time.

Moreover, eastern redbuds belong to the genus Cercis and are found in the pea family (Fabaceae) along with legumes and beans. That's because they produce a flower and seedpod during their spring bloom.

So, unlike an evergreen species, your eastern redbud will not hold its color as the winter weather approaches.

What USDA Zones Can You Grow An Eastern Redbud? 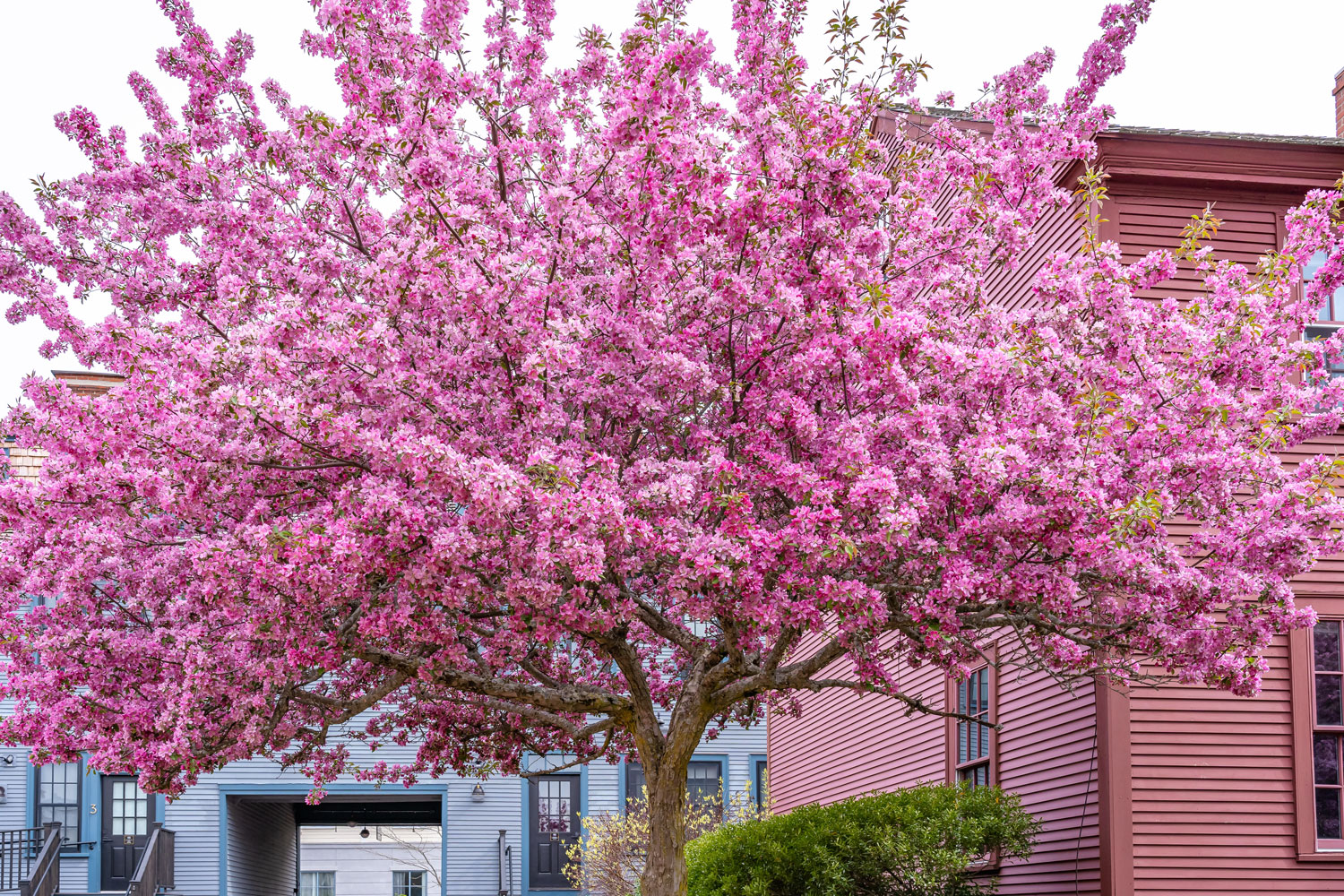 For example, zone four gets down to -30 degrees Fahrenheit at its coolest, meaning your redbud will be able to withstand those unimaginable conditions.

In contrast, zone nine gets to around 90 degrees Fahrenheit at its hottest, so your tree could also be okay in warmer conditions. Of course, these warm or cold temperatures will also impact when your tree starts losing its leaves.

You want to remember that cooler (lower) USDA zones may get cold enough to trigger a redbud to shed its leaves starting in the early fall.

On the other hand, if you're in a higher growing zone, like 7-9, your eastern redbud could hold off on losing the majority of its foliage until winter.

This will be slightly different for everyone, so each redbud isn't a one-size fits all situation.

When Do Eastern Redbuds Lose Their Flowers? 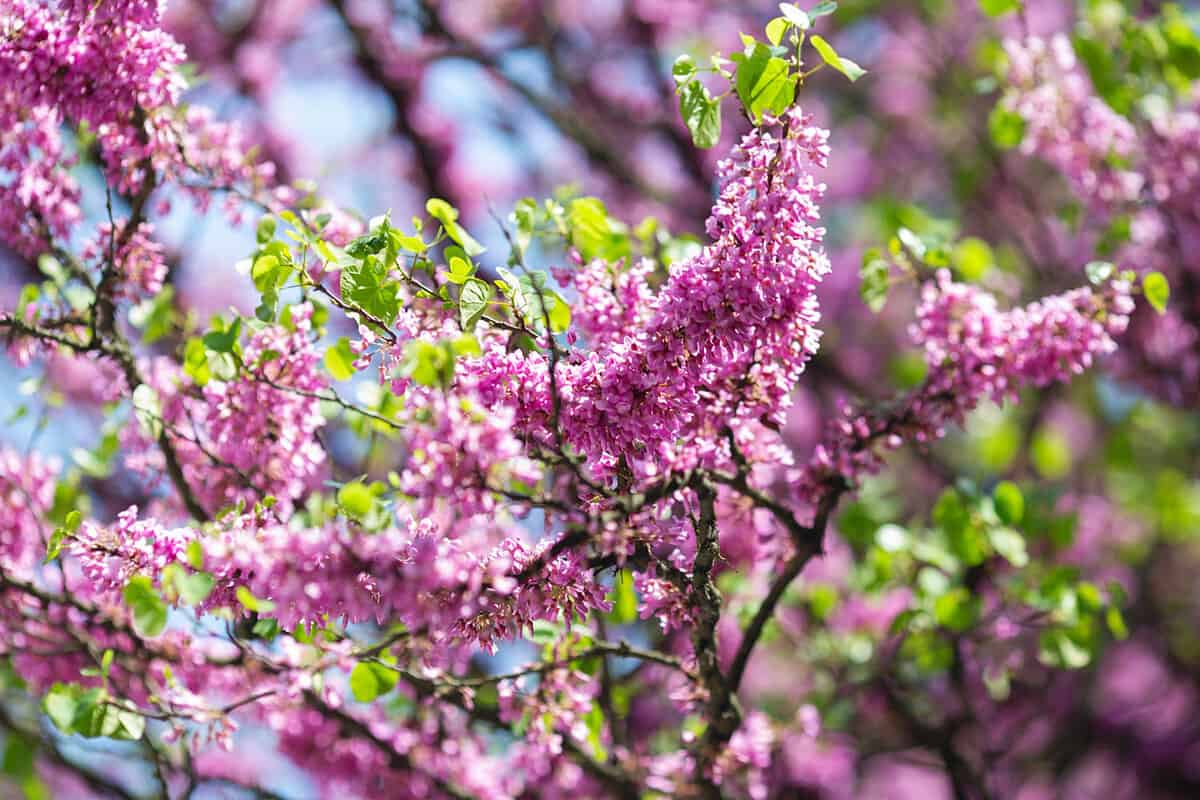 Now that you know when an eastern redbud loses its leaves, what about the flowers? In general, your redbud will bloom during March and April, flowering for roughly three weeks.

Therefore, your tree should shed its flowers by May/June, depending on when the bloom begins. Unlike the leaves on your eastern redbud, the flowers follow a different timeline for living and then falling to the ground.

Since your tree needs warm weather to produce blooms, the majority of its color will happen during the early-mid spring season. Afterward, your tree will shed its leaves through fall, becoming completely bare in December.

Although we wish the flowers lasted forever on a redbud, try and enjoy those three weeks of pinking-purple blooms! Redbuds are a favorite among ornamental trees for their color, so this is certainly a great option for a landscape's centerpiece.

Do All Eastern Redbuds Produce Flowers?

Yes! One of the benefits of planting eastern redbuds is that they'll always bloom. Although your tree may take a year or so to produce flowers, once it starts, it won't stop!

According to experts, there are three types of eastern redbuds:

Of these three botanical varieties, all of them will produce purplish-pink flowers through the spring. However, some eastern redbuds feature white, deep magenta, or light pink flowers, so their color will vary.

On top of that, the legumes your redbud produces during the blooming season are also edible. Therefore, you can enjoy the flowers and harvest a couple of legumes while you're at it.

These trees are fascinating physically, often showcasing stunning blooms, legumes, and silver branches in the wintertime.

So, if you want to plant a couple and take a gamble on their flower color, that's certainly worth trying.

Why Isn't My Eastern Redbud Blooming?

If your eastern redbud doesn't bloom, this is solely because of its age. Since all eastern redbuds flower, the cause for one not producing flowers means it isn't mature enough yet.

Generally, a newly planted redbud tree will need a season or two before producing flowers. According to Arbor Day Foundation, a redbud generally needs to be four years old to flower.

Therefore, if your tree is younger than four, you shouldn't anticipate any blooming until it reaches that milestone. Again, this can vary depending on the conditions and your tree's nutrients, so you might be able to witness the first bloom closer to three years.

And, if all else fails, your tree might benefit from a bit of fertilizer, which will give it a boost of much-needed energy.

How Big Do Eastern Redbuds Get? 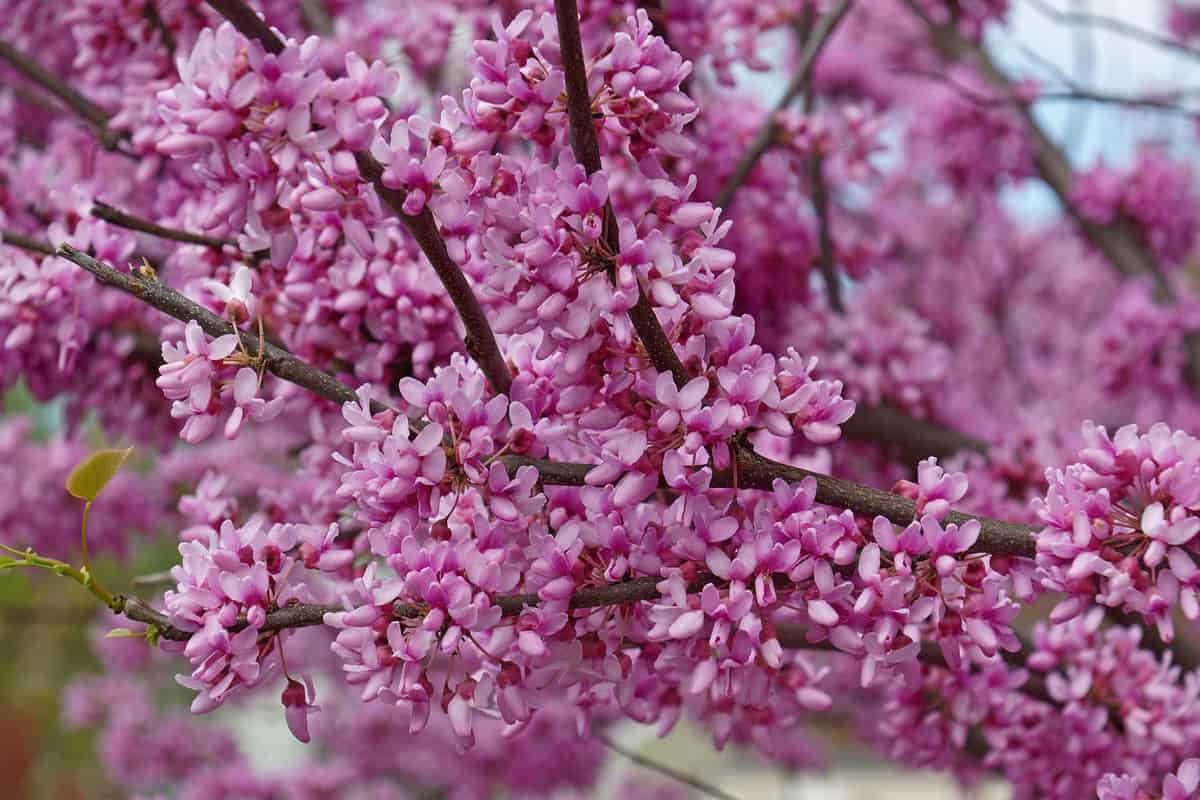 Depending on where you have an eastern redbud, it could grow to be 20-30 feet upon full maturity. Of course, this species typically gets to be around 20 feet tall with a similar spread in most cases, so that's a good goal to set for yours.

On top of becoming possibly 30 feet tall, your eastern redbud also should have an impressive spread. Usually, at a fully mature age, a redbud will feature a 25-35 foot spread, which naturally grows round.

As we mentioned earlier, this tree is considered small, so it won't become a towering monolith within your landscape. Instead, you may want to grow this tree in the front or back yard in the open, allowing it to become a centerpiece for your property.

Remember, eastern redbuds are very showy in spring and winter, so they love attention. In ideal growing conditions, your tree may reach 30 feet with a similar spread, so give it as much space as possible.

Trees with more ground space to sprawl tend to get bigger than those that feel restricted, so that's another factor to consider.

Whether you have an eastern redbud in your landscape or want one, it's always good to know when they'll lose their leaves. We found that an eastern redbud typically sheds its foliage during the fall, eventually becoming bare in the winter.

In addition, your redbud should show off its silvery twisted branches as the leaves die, so that's a positive to their dormant phase. On top of that, your tree should bloom in the spring for three weeks, losing those gorgeous pink-purple flowers before the summer.

We recommend planting eastern redbuds in USDA zones 4-9, as they do best in these regions.

Made it to the end? Check out these helpful related garden articles below:

What To Plant Under Redbud Trees [Flowers, Grass, & More!]

Do Rhododendrons Lose Their Leaves In The Fall/Winter?

Do Magnolia Trees Lose Their Leaves In Winter?