A dead conifer hedge is actually an excellent base or framework that could support different plant types and varieties. Flowering ivies, fast-growing vines, and other blooms will thrive and create an attractive landscape. Read on and find out what our research revealed.

Combining several plant varieties would create a year-round array of colors over and around your conifer hedge. Early flowering clematis, roses, and sunflowers for summer bloom, honeysuckle for berries in autumn, and evergreen ivies will complement and create an attractive display.

A dead hedge can ruin the appeal of any garden, yard, or landscape, but there are actually several ways to transform it into a living wall of flowers and rich foliage. The article includes the most optimal plant choices as well as their care and maintenance. 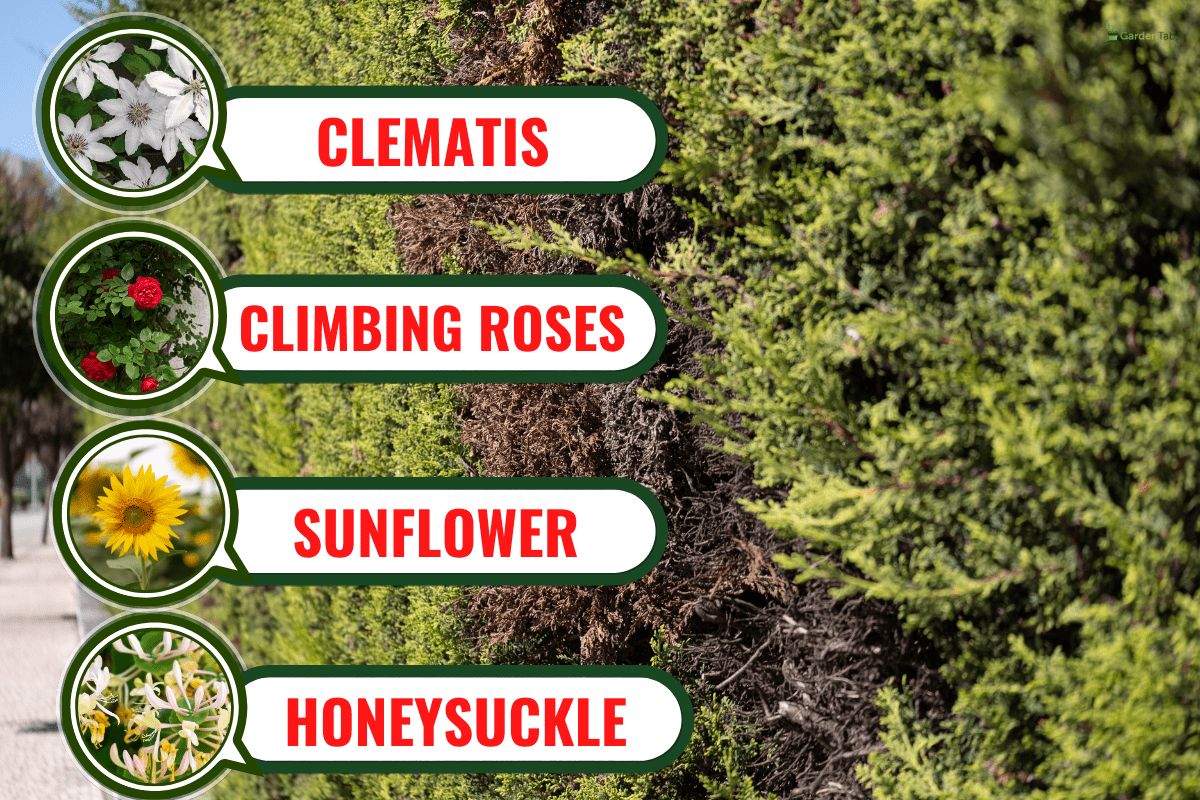 Clematis, climbing roses, and honeysuckles basically thrive under the same conditions. Their growing requirements are closely identical in terms of sunlight, water, soil, fertilizer, care, and maintenance. Since they bloom at different times, your hedge will feature a dynamic and attractive display throughout the year.

They are susceptible to similar parasites and plant diseases which would only necessitate the use of a single, all-around organic-based pesticide to address all possible infestations.

Sunflowers can be grown a few feet apart from the hedge to provide depth and variety to the structure. Tall cultivars may be placed behind or around the other plants to create an attractive backdrop.

You can further complement the hedge by placing container-grown ivies over the top that eventually drape down over the wall. While the clematis, honeysuckle, and climbing roses scale the vertical column, the ivies will cascade to complete a natural-looking, densely covered divider.

Clematis is dubbed the "queen of the vines" due to its rapid growth and showy blooms that feature a wide range of colors and forms.

There are over 300 species of vines, shrubs, trailing types, and ground covers that live long and constantly produce flowers. It is a perfect choice for your hedge since the plant thrives best when there is a stationary structure to scale.

How To Plant Clematis 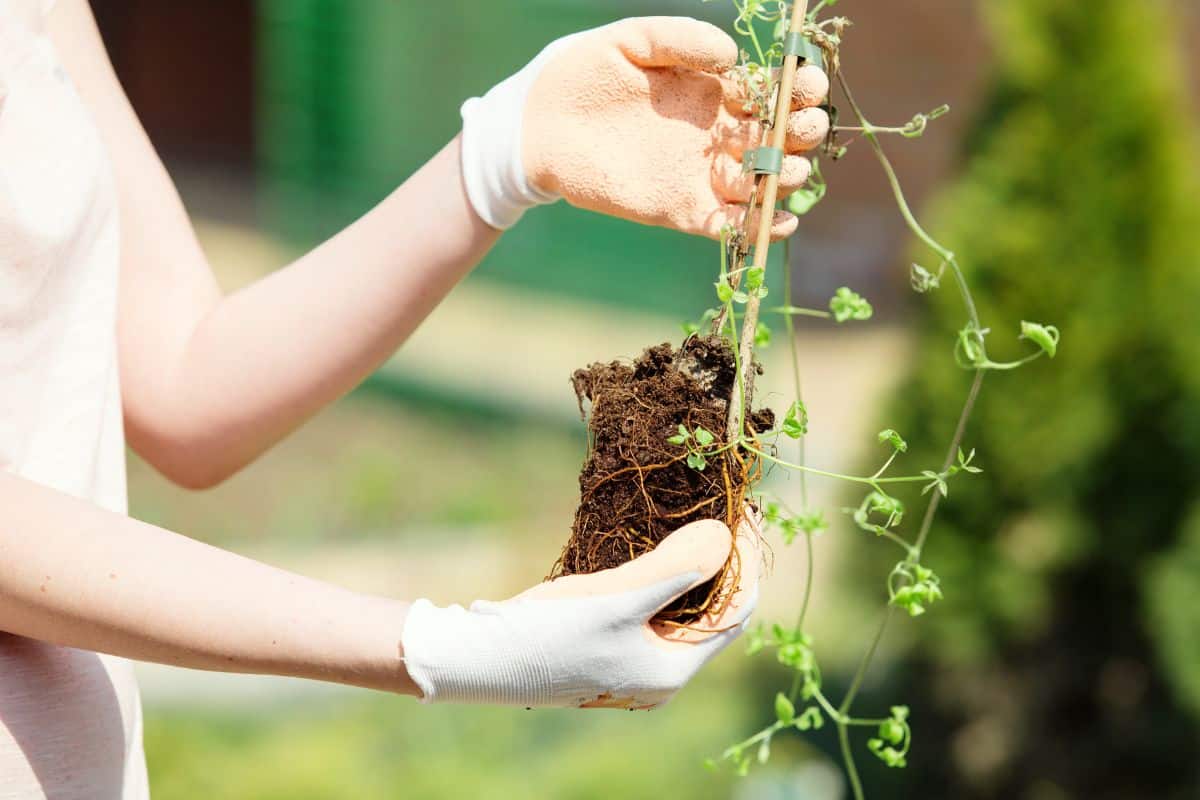 Pick a spot close to the hedge that is exposed to sunlight at least six hours a day which is necessary for a good yield of flowers. Plant during early springtime when the soil is generally cooler.

Dig a hole twice the size of the rootball and make sure the lower portion of the main trunk is also below the ground. Fill in with a fertile medium and water thoroughly, so the soil settles evenly around the roots. Apply two inches of mulch to keep the soil moist and regulate the temperature.

How To Care For Clematis

Water your clematis weekly, and do not let the soil totally dry out. Regularly check the moisture level and adjust the hydration based on your local climate.

You can apply all-purpose fertilizer yearly during spring with a 5-10-5 proportion of nitrogen, phosphorus, and potassium. It is the ideal amendment that would produce the most blooms.

Reapply a fresh layer of mulch or compost during the fall to protect the roots over winter, and water the plant less often during the period.

Pruning clematis promotes flowering and keeps the plant vigorous. Cut off dead branches and bloom regularly after the flowering season.

What Are The Best Varieties Of Clematis?

The following is a list of varieties most recommended by gardeners and horticulturists: 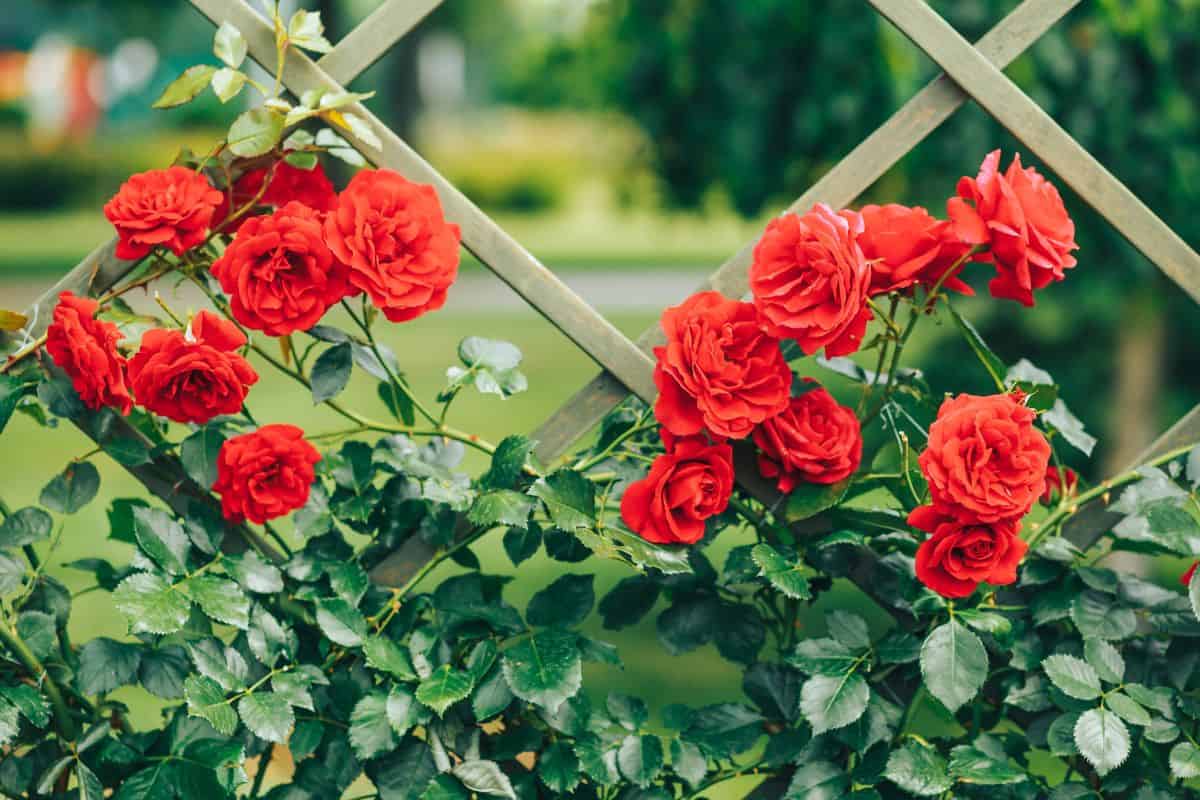 While roses need no introduction, the climbing variety possesses thorny canes that anchor themselves onto vertical supports. There are a limited number of available cultivars, but the color range covers a wide spectrum to choose from.

How To Plant Climbing Roses

It is possible to propagate roses through cuttings or bare-root planting. However, the success and survival rates are comparatively less than using potted plants.

Roses thrive in full sun so plant them in areas near the conifer hedge that receives at least six hours of sunlight daily. Partial sun or shade will produce fewer blooms and weaken the plant gradually.

You can plant potted roses anytime during the growing season, but late spring is the optimal period. Dig a hole two to three times the size of the rootball of your container-grown plant and line the excavation with organic matter. Once the roses are in place, water the surrounding area liberally to moderately compact the soil.

How To Care For Climbing Roses

Roses need to be watered twice a week, and the soil should not be allowed to dry out completely. Regularly monitor the moisture, especially during the summer, and gradually reduce the amount of water towards the end of the year.

A layer of mulch a few inches away from the base of the plant will help regulate temperature, retain moisture and reduce weed growth. Organic matter is released into the soil, which provides nourishment and improves drainage.

Compost and natural fertilizers are best applied instead of artificial amendments before the blooming season to maximize yield. Once the roses become established, you can apply slow-release granular fertilizer in late spring.

Deadheading refers to pruning off the flowers after they wilt, which results in the production of more blooms.

The plant's energy is conserved, and nutrients are diverted to support healthy structures. The procedure may have to be performed weekly, especially after the flowering season.

Regularly pruning the canes once the leaves turn yellow and the flowers have bloomed will stimulate the development of new ones. This will cause the climbing rose to thicken and eventually cover the entire surface of the dead conifer hedge.

What Are The Best Varieties Of Climbing Roses?

Sunflowers produce vibrant and beautiful yellow blooms that will certainly add color to your conifer hedge during the summer. They attract beneficial insects and pollinators and serve as food for most specific birds.

There are several varieties you can choose from that are well-suited for your garden, climate, and general environment. Many gardeners and plant enthusiasts grow sunflowers due to their fascinating characteristics.

They are considered heliotropic, meaning that the flowers face and follow the sun's direction. Once it sets, the blooms revert to facing east and wait for the sun to rise again.

How To Plant Sunflower

It is advisable to grow sunflowers directly on the ground because their roots are sensitive to transplanting. Plant them beside the conifer hedge after the first frost has passed, and you can work with the soil.

In the northern part of the States, this occurs in the months of April and June, while in the southern regions, it is between mid-March to early-April.

However, be sure to choose a sunny location because sunflowers are sun-loving plants that need plenty of light exposure.

How To Care For Sunflowers

Sunflowers are relatively easy to care for. Young varieties require sufficient watering around their roots to facilitate their growth, while mature plants only need thorough hydration once the soil is dry.

Although sunflowers can tolerate almost all growing conditions, it is advisable to grow them in loose and well-draining soil. If you have already amended the growing medium with compost and organic matter, the plant won’t need to be fertilized.

What Are The Best Varieties Of Sunflower?

Honeysuckles demonstrate a spectacular show of blooms in the spring. It produces clusters of tubular scented flowers with a range of vibrant colors, including white, pink, purple, yellow, and red.

It can be grown as a groundcover, a hedge, or be trained as a vine. You can attach the climbing variety to the dead conifer using strings or other similar materials.

How To Plant Honeysuckle

Although honeysuckles can tolerate partial shade, they should be planted in an area where they will receive full light exposure. Its roots, however, are sensitive to direct sunlight, so find a good spot that caters to its daylight requirements.

Dig a hole relative to the size of its rootball, and be sure to amend the soil with compost and organic matter to create an ideal growing medium before planting.

How To Care For Honeysuckle

Mature honeysuckles can climb on their own. Young plants should be trained to cling to the conifer hedge.

Hydrate the plant regularly and keep the soil evenly moist but not waterlogged. Increase watering only during long dry spells. In spring, apply general-purpose fertilizers with equal amounts of NPK to encourage flowering.

Climbing honeysuckles should be pruned during the growing season. For those cultivars that produce blooms in early summer, remove them after flowering. Otherwise perform light pruning in the spring for late summer blooms.

What Are The Best Varieties Of Honeysuckle?

What Can I Plant Next To A Conifer Hedge? 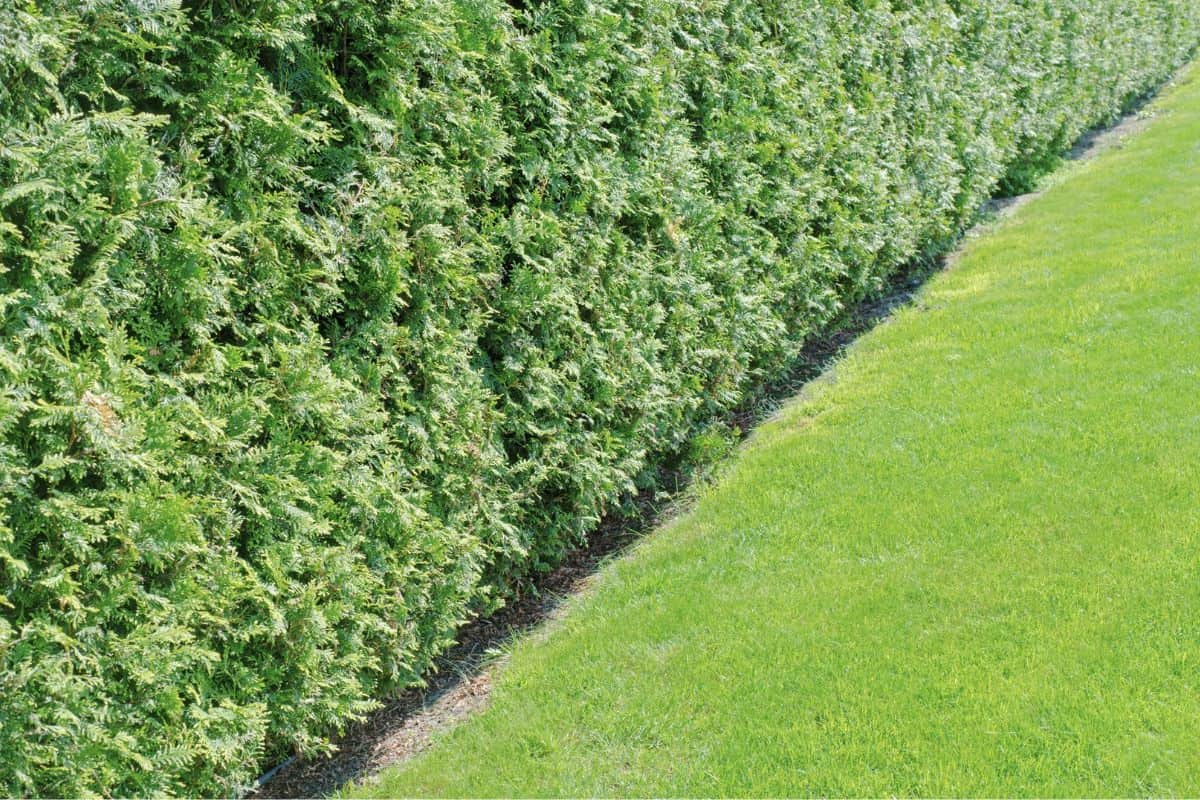 Although a thriving conifer hedgerow could affect other plants, there are several companion plants you can plant next to it.

Small trees including the Variegata and olive tree, shrubs like rhododendrons and azaleas, as well as some perennials such as the rose marie and canary bird are excellent companion plants. 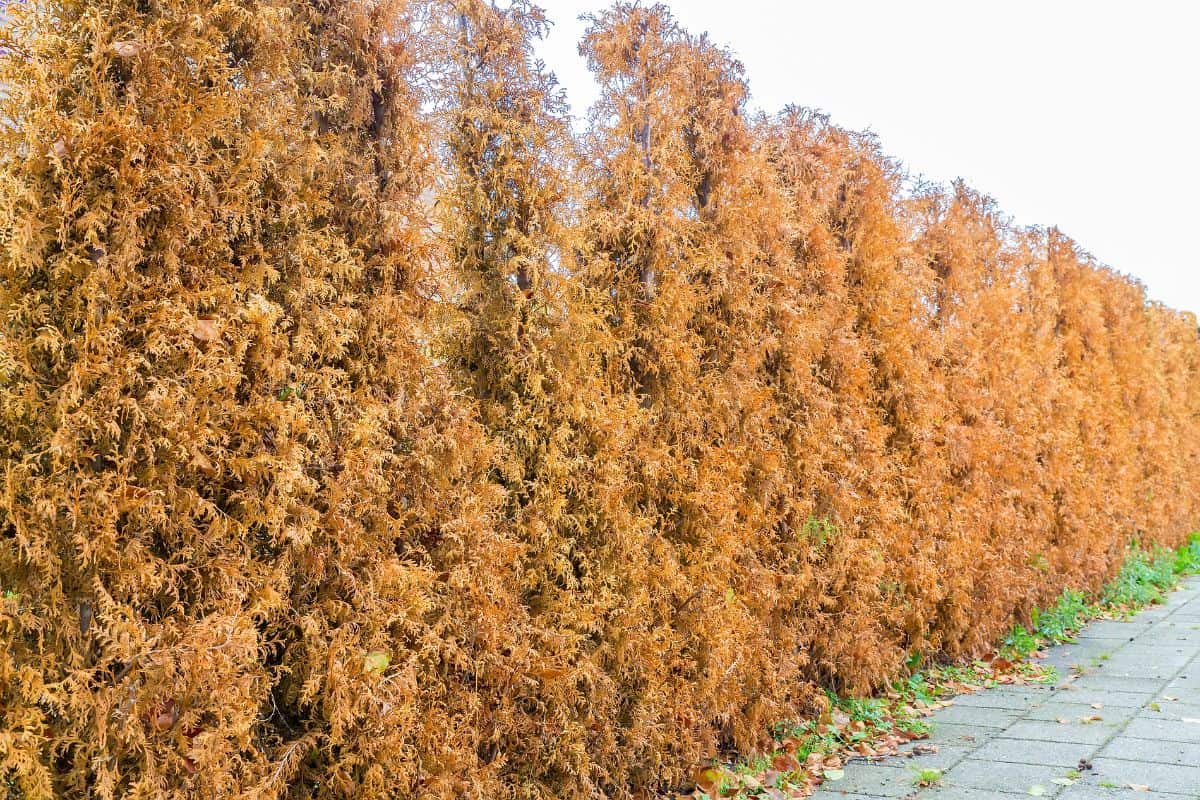 There are a multitude of choices that you can grow on a dead conifer hedge, and the article simply covered the ideal companion plants that thrive best in the same conditions. The final say depends on your preference and we hope the post helps you create the best attractive, healthy, and colorful combination.

How To Hide A Dead Conifer Hedge