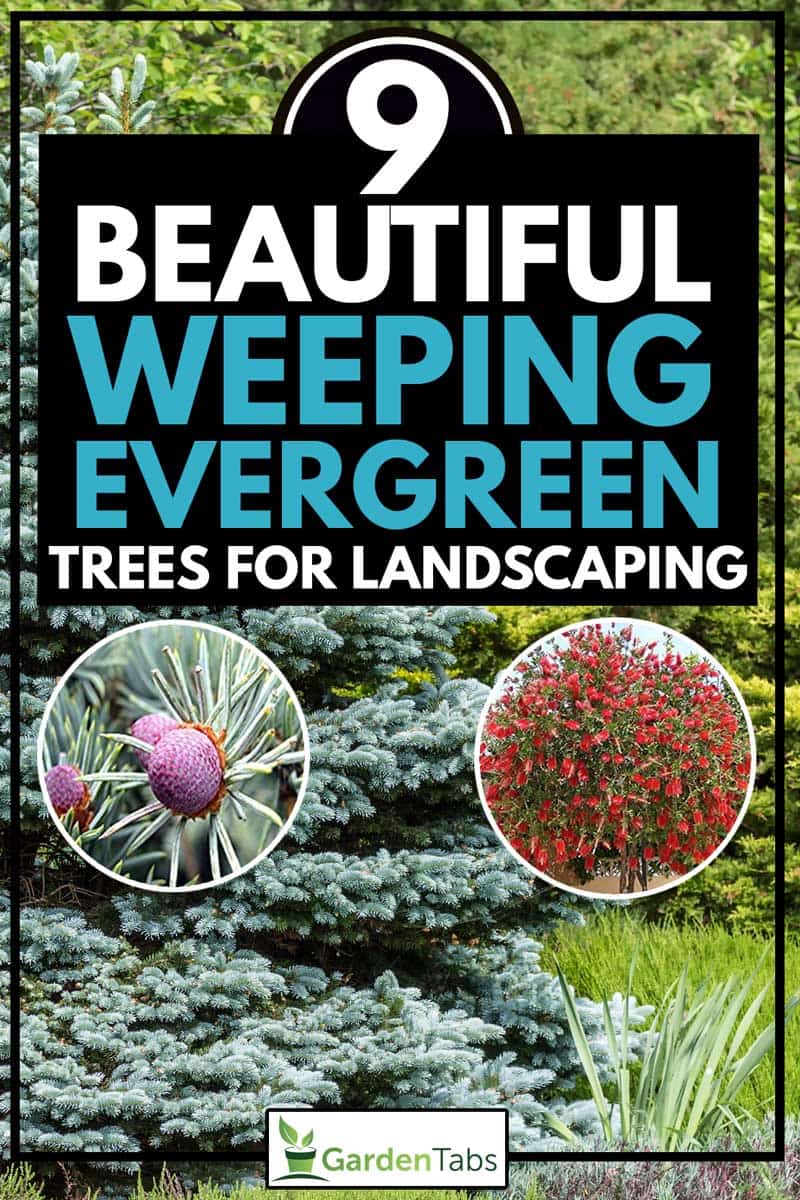 If you're looking for a dramatic addition to your garden that is equally stunning in winter as it is in summer, you should consider planting weeping evergreen trees. A "weeping" tree is defined as any tree that has branches or foliage that droops toward the ground, creating a graceful, cascading look unlike any other. Combine this with the hardiness, easy growth factor, and year-round attractiveness of evergreens, and you have a winning combination! In this article, we've selected nine great weeping evergreen options for gardens in a variety of climates. With trees originating everywhere from Norway to Australia, you might find a few surprises on this list. Let's take a look!

If you can't get enough of evergreens, you can also check out our articles 11 Fast-Growing Evergreen Shrubs That Look Great All Year Long or 11 Evergreen Edging Plants for Garden Borders for more ideas.

The mature Blue Atlas Cedar in this image has been given plenty of room to grow and spread its beautiful branches.

The Blue Atlas Cedar (Cedrus atlantica 'Glauca') is a majestically towering tree with silvery-blue needles that drape from its branches. With its tall, classical pyramid shape that can reach heights of 60', this tree is perfect for spaces that need a large, dramatic focal point.

This tree becomes even more beautiful and expansive as it ages, so be sure to plant it in a place that gives it plenty of room to grow. The Blue Atlas Cedar thrives in full sun, any well-drained soil, and the climates of Zones 6-9. Although it prefers frequent watering in its early years to establish a deep root system, it becomes tolerant of mild drought with age.

One of the most popular evergreens, the Blue Spruce (Picea pungens) is a tall, conical-shaped evergreen with prickly, silvery-blue needles. When cultivated, it typically reaches heights of 50' to 75' and a spread of 10' to 20' in maturity. Even though this tree wasn't discovered until 1862, it has become one of the most widely planted evergreens due to its beautiful color and shape.

Because of its deep and extensive root system, the Blue Spruce is also very resistant to wind and makes an excellent windbreak or privacy shield. It's native to Zones 2-7 of North America and grows well in any soil in a place that receives full sunlight.

As the fastest-growing spruce, the Norway Spruce (Picea abies) quickly reaches heights of 60' at maturity. It's a graceful tree with short, fluffy bright green needles and small branches that drape down from the main branches. Due to its classic pyramid shape and brilliant foliage, it's a popular holiday tree when harvested before it's full grown.

It's also often used as a windbreak and snow break in many different locations.  The Norway Spruce is native to most of Europe and grows well in the cool to temperate climates of Zones 3-7. It prefers full sunlight and is extremely adaptable to any type of soil, but prefers moist and acidic conditions.

The Weeping Alaskan Cedar (Chamaecyparis nootkatensis 'Pendula') adds a surreal, dramatic touch to any landscape with its narrow, towering shape and long, drooping branches covered in soft, wispy needles. At 25' to 30' tall and with a spread of 10' to 20' at maturity, this tree is small enough for more confined spaces while still making a huge impact.

The Weeping Alaskan Cedar prefers moist, well-drained soil and full sun to partial shade in the climate of Zones 4-7. It's also resistant to most pests, which makes it a delightfully easy to grow tree.

This image of a White Spruce shows off its classical silhouette.

The White Spruce (Picea glauca) is a tall evergreen with short blue-green needles that drape elegantly from regularly-spaced branches. It grows slowly to about 60' tall with a 20' spread in maturity and is one of the most popular evergreens due to its classically symmetrical cone shape.

It's a hardy tree that is only prone to damage from spider mites and makes a great shade tree or wind block. The White Spruce grows well in any moist, well-drained soil - it just prefers that the ground not be completely wet. It also thrives in full to partial sun in the climates of Zones 2-6.

The Weeping Hemlock in this image provides a strong focal point in rural landscaping.

A gracefully drooping evergreen with cascading branches, the Weeping Hemlock (Tsuga canadensis 'Pendula') makes a strong statement wherever it is planted. At 10' to 12' tall with a spread of 20' to 30', this is a petite tree that likes plenty of room to spread.

It requires some pruning in its younger years to develop a strong structure and prevent the branches from becoming too heavily concentrated in one place and breaking the tree. The Weeping Hemlock is very tolerant of most light and soil conditions - it just prefers well-drained, salt-free sand and grows best in Zones 4-7.

In this image, a Golden Deodar Cedar stands out against a green background.

The Golden Deodar Cedar (Cedrus deodara 'Aurea') is a tall, pyramid-shaped evergreen that takes its name from its stunning foliage. Although the foliage turns golden-green with maturity, it appears at the ends of its long, graceful branches as golden-yellow new growth. The tree reaches heights of 25' to 35' with a spread of 15' and makes a striking, pollution-resistant addition to any garden that provides eye-catching color year-round.

A native of the Himalayas, the Golden Deodar Cedar grows best in the warmer climates of Zones 7-9 and prefers any well-drained soil and lots of watering in its early years. Full sun locations lead to the most brilliant foliage colors.

The silvery leaves of the Weeping Acacia in this image make it pop against the green background.

Native to Australia and New Zealand, the Weeping Acacia (Acacia pendula) is a unique evergreen with draping branches covered in long, silvery leaves. Rounded and full at its early ages, this tree becomes tall and thin with maturity and eventually reaches heights of 15' to 20', although it can also be grown in containers.

Resistant to both deer and drought, this hardy tree grows well even in harsh urban conditions. Since its leaves have a minimal amount of shedding, it's a popular choice for growing along sidewalks and streets. The Weeping Acacia enjoys full sunlight, any type of well-drained soil, and the hot climates of Zones 9-11.

Click here to view a Callistemon plant on Amazon.

Another Australian native, Callistemon (Callistemon citrinus), also known as the weeping bottlebrush tree, is technically classified as an evergreen and makes an eye-catching addition to any landscape. It's a small tree that reaches only 3' to 5' in maturity and has large red flowers that resemble bottlebrushes tucked among its long, narrow leaves and drooping branches.

The Callistemon prefers the heat of Zones 9-10 and can be cultivated as a shrub in warm climates, grown in containers that can be taken inside for the winter in cooler places, or even grown as a houseplant. It needs full sun, moderate watering, and moist, well-drained soil to truly thrive.