Weevils are beetle species notorious for damaging gardens, landscapes, and agricultural crops. Specific weevils eat particular plants. Will a vine weevil attack roses? Read on and find out what our research revealed.

Vine weevils usually feed on the leaves of the following:

They can attack bushes or potted roses if the plant is nearby, but the species to look out for would be rose or curculio weevils.

You can identify weevil damage by chewed-off and damaged leaves or punctured and wilted flowers. However, the actual degree of infestation is difficult to determine without examining the soil.

This article includes ways to identify and differentiate vine from rose weevils, ways to control the attack, and ways to prevent repeated cycles. 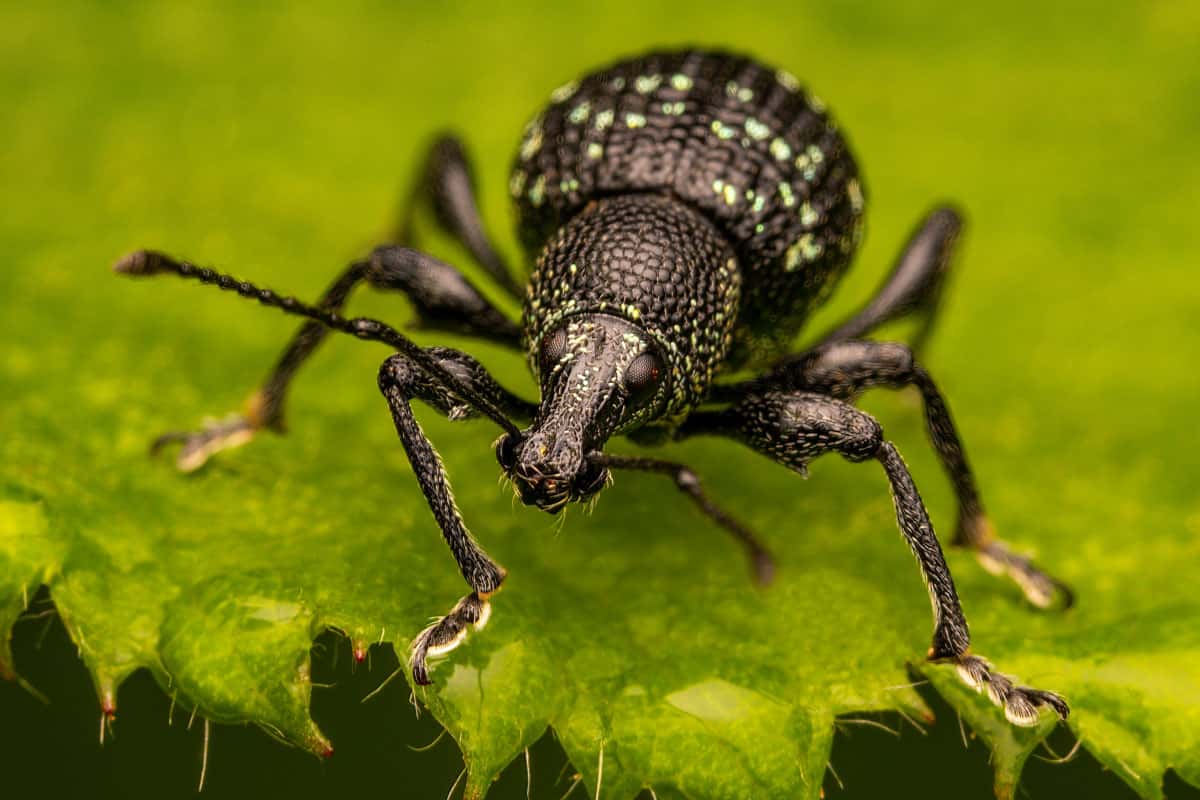 Vine weevils are known to feed on various species of vines and ornamental plants. They were first discovered in a grapevine in Germany, and presently, they are found commonly on rhododendrons.

Adult weevils either feature a brownish to grayish-black outer body with a short and broad snout. They are half an inch long and have elbowed antennae.

Unfortunately, female vine weevils are pathogenic, meaning they can reproduce on their own without the need for intercourse. Infestation is more rapid since a single female can lay up to 500 eggs which are usually found on the base of the plants.

The larvae tend to burrow under the soil and feed on the roots. Infestation can be undetected and can only be known when the plant is already dead. 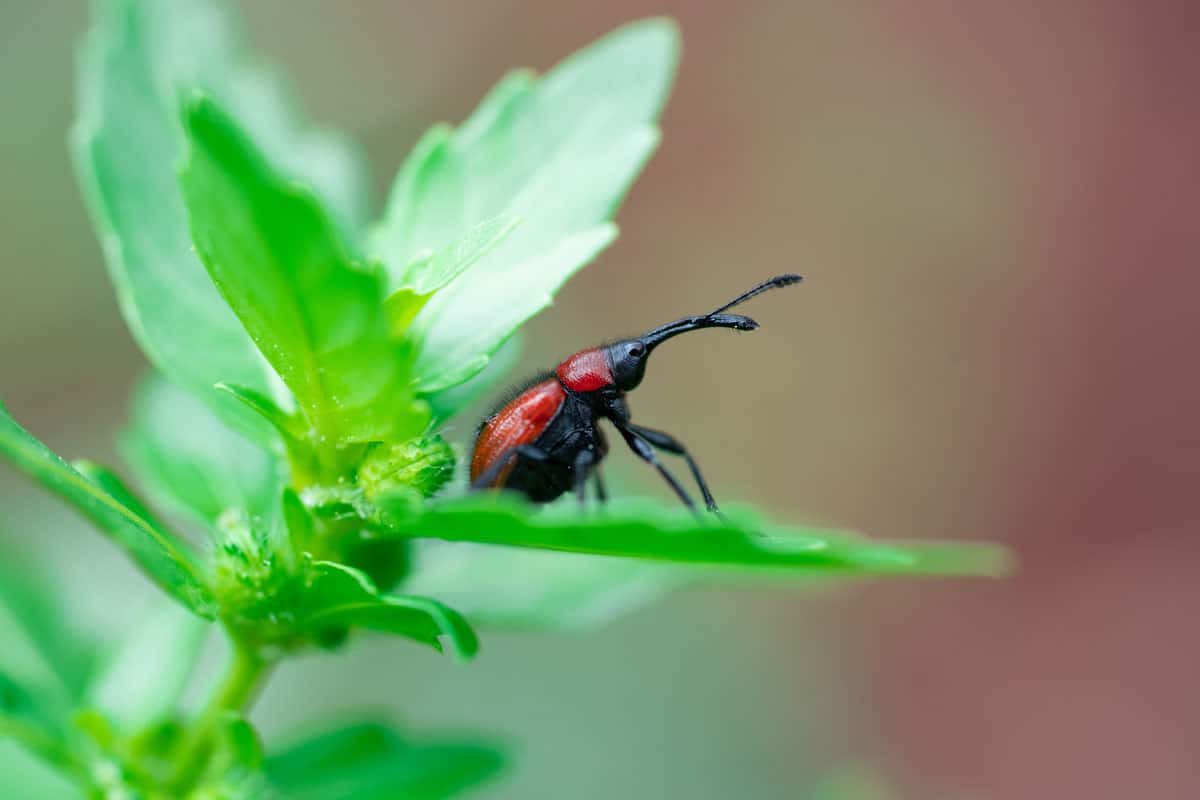 Rose weevils or curculios are flightless beetle species that feed mostly on roses. The adults have a red, hard outer body with an elongated black head that features a long and distinct snout called a rostrum. They have long, black legs and measure about 1/4 of an inch when fully grown.

The white oval eggs measure 1/25 of an inch and can be difficult to discern because of their size. They stay easily hidden in the buds of flowers.

The white, plump, legless larvae have a brown head capsule and distinct body segments. Once the eggs fall into the ground, they develop and cause the most potential damage by feeding on the root system.

What Are The Signs Of Weevil Infestation?

Larvae Cause The Most Damage

Weevil larvae, also referred to as grubs or billbugs, develop below the ground when eggs fall, depositing into the soil.

They feed on root matter and can totally cut off nutrient and water absorption, weakening and eventually killing the plant.

Once the larvae consume the primary root structures close to the plant base, damage accelerates and becomes more pronounced. Depending on the weevil species, they can produce as many as 200 to 500 eggs per cycle.

Adult vine or rose weevils primarily cause leaf and flower damage and create aesthetic but minimal effects since they feed on external structures that are less significant to the plant's overall health.

Why Is It Important To Know The Life Cycle Of Weevils?

Being knowledgeable about the life cycle of weevils can help you detect infestation during its early stage, apply treatment as needed, and prevent an attack on a larger scale.

Weevils usually begin laying eggs as early as June and as late as August after the adult females have already consumed enough food to aid reproduction. These eggs appear white and turn into a brown hue before they hatch.

The eggs typically take about two to three weeks to hatch, and then the larvae burrow under the soil to feed on their host's root system. During summer, these white and plump larvae will spend the season underground up until late fall, when they enter the pre-pupal stage.

They hibernate beside the roots throughout the winter and begin to pupate in the spring. The fully-grown female will begin feeding on the plant’s stems and leaves before laying eggs. The cycle continues.

How Do You Control Weevils? 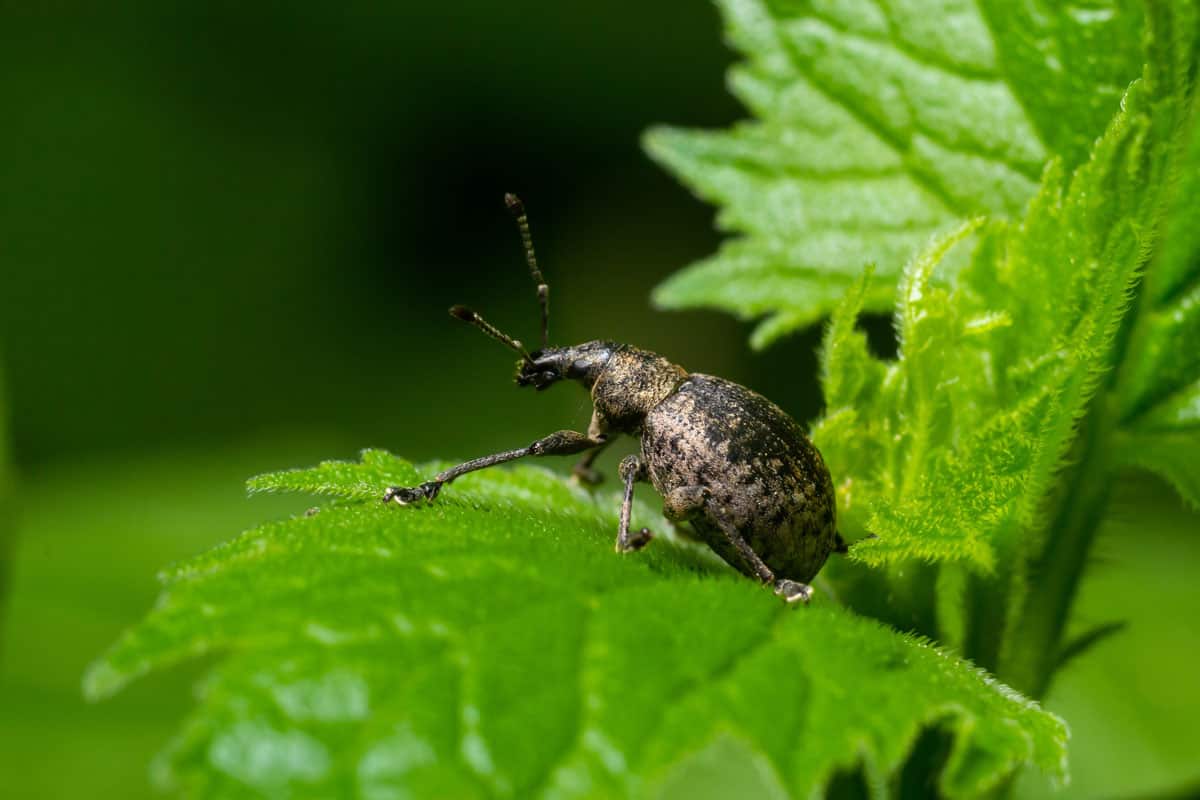 Most weevils hide during the day and feed during the night. This makes it an ideal time to do the task since the insects are actively roaming around the plant.

Weevils could be controlled by using the following methods:

The most natural way to get rid of adult weevils is by manually picking them. It may take a lot of work, but the plant won’t be exposed to chemicals.

Wear gloves or use tweezers to take out those that are lodged in between the petals to not damage the flowers.

Shake the plant and let the weevils fall off. Put newspapers or plastic lining under the growth before shaking it so the insects fall into the material and not on the ground. 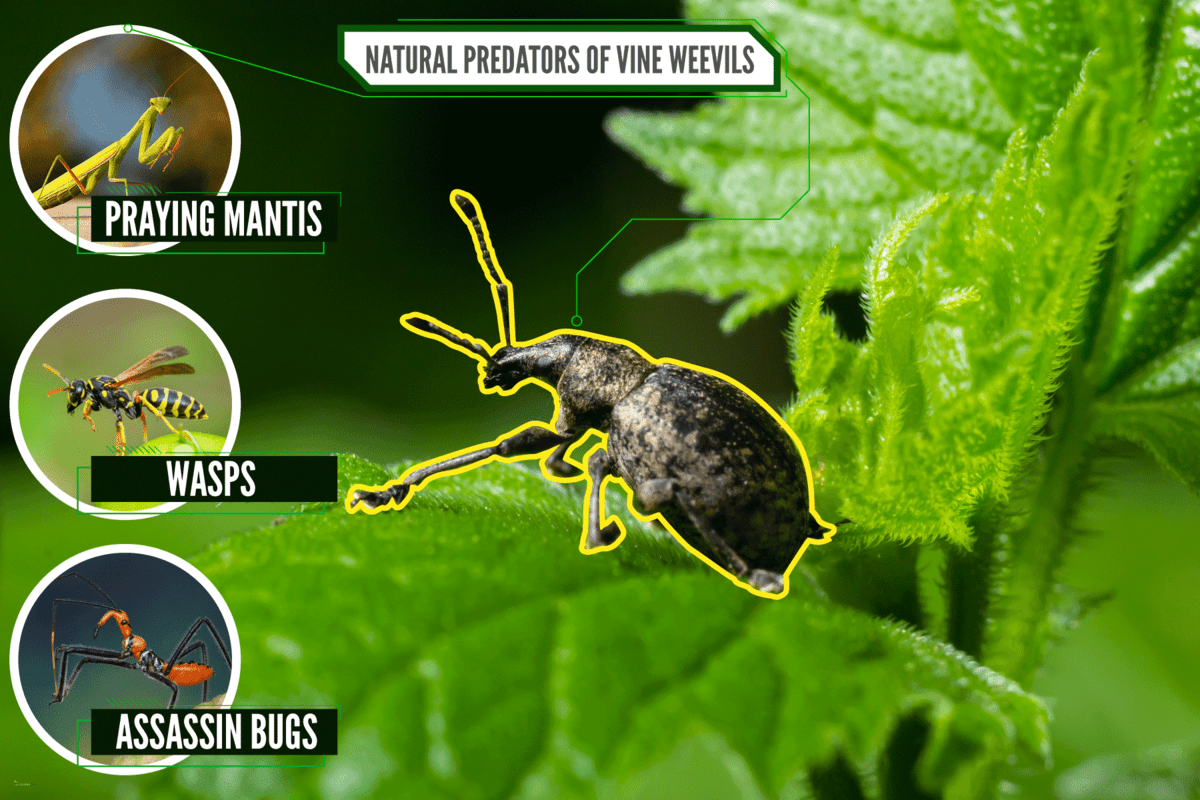 Beneficial insects don’t feed on plants, but they rather prey on other insects. Praying mantises, wasps, and assassin bugs naturally feed on adult weevils and can help control large and small-scale infestations.

To control larvae infestation underneath the soil, you should introduce beneficial nematodes to the environment. They are microscopic parasites that do not harm plant health since they only feed on root-eating larvae.

The right application period affects its effectiveness—in the late spring and early summer when the soil temperature is 55 degrees Fahrenheit and relatively moist. Since they are sensitive to the sun’s Ultra Violet (UV) rays, it is best to apply them in the morning, at dusk, or during a cloudy day.

Beneficial nematodes are available online and in garden nurseries. You can dilute the contents in a bucket of water and spray the solution on infected areas. Do not forget to read the instructions stated on the package.

Neem oil is a natural spray containing an extract from the Neem tree and a safer alternative to chemical solutions. Apply the product on infected foliage and stems at least once a week to control the infestation.

The oil acts as a protective film that coats the leaves as well as other plant parts. Although it does not directly kill insects, it gradually affects their life cycle, feeding behavior, and reproductive capability, rendering them unable to reproduce, eat, and lay eggs.

If eggs are exposed, they do not usually hatch or end up as deformed larvae.

Do Weevils Infest Food In Your Home 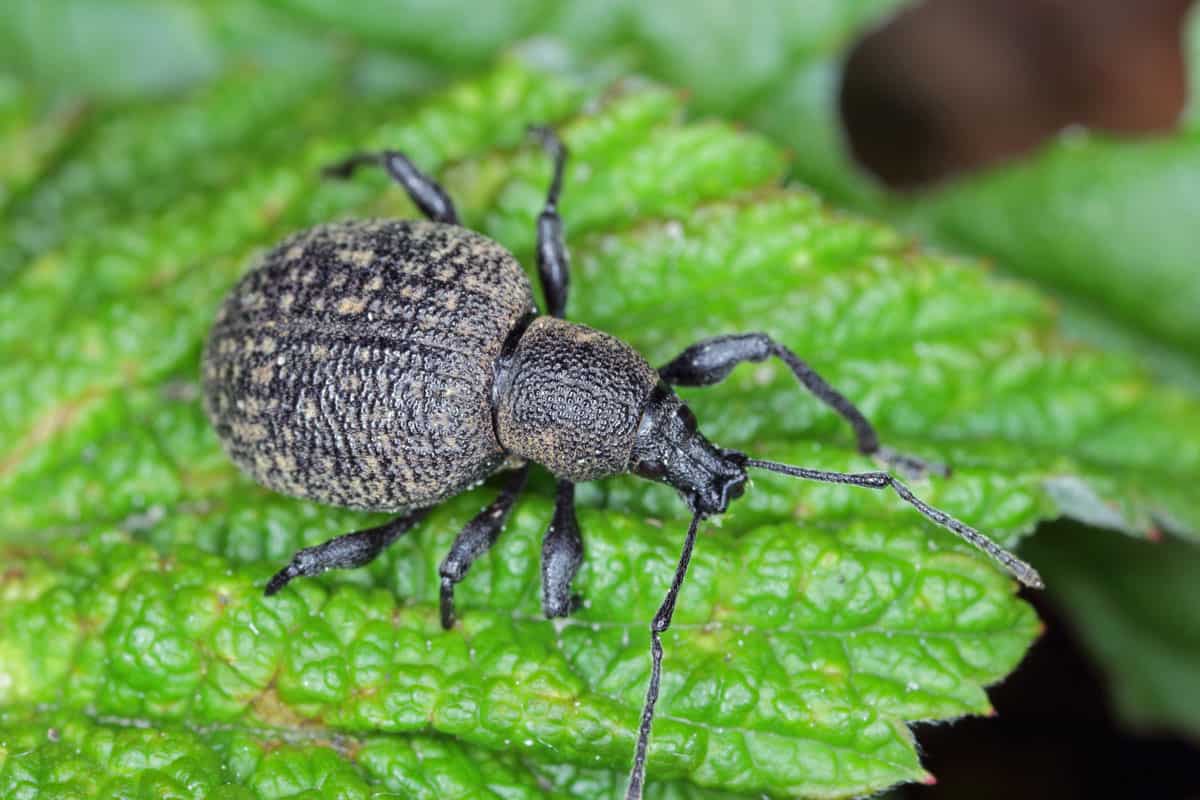 Unfortunately, weevil infestation is not limited to garden and agricultural plants. They are known to feed on and dwell in certain stored products.

Which Weevils Species Infest The Home?

Rice, grain or granary, and corn or maize weevils are so named because of the specific stored food they infest.

Does Eating Weevils Make You Sick?

Weevils, including larvae and eggs, do not have any harmful effects on humans. Accidentally consuming them is safe.

It would be such a waste to discard a full bin of rice! Instead, you can wash the grains thoroughly several times before cooking.

Soaking beans or rice grains will cause the adult weevils and larvae to float and be easier to fish out with a strainer. Unfortunately, it is not applicable to flour so just discard it altogether.

How To Manage And Prevent Weevils In Food

Once you find any form of infestation, take the following management recommendations: 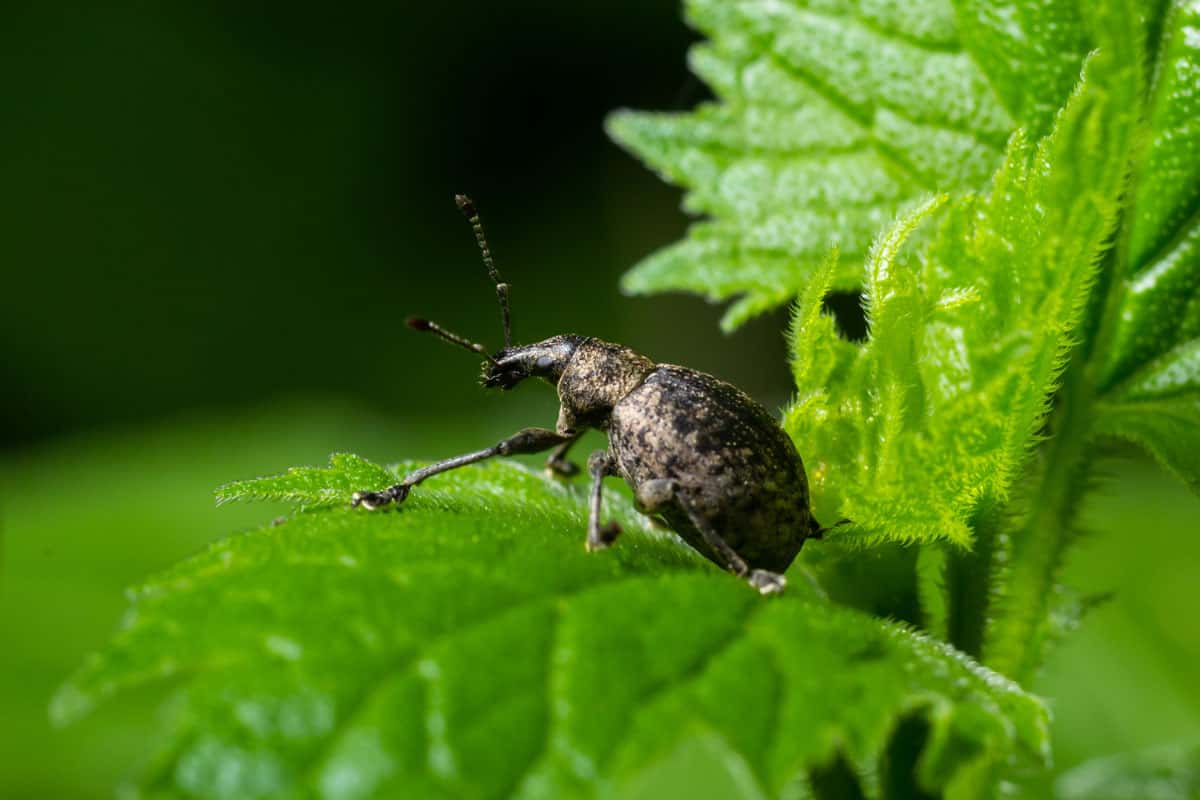 Different species of weevils prey on a specific type of plant, the larvae being the most destructive stage since it feeds on the root system. Constantly monitor susceptible plants since weevils tend to multiply rapidly. We hope the article has helped you identify weevils and control infestation.

What Is Eating My Rhododendrons? 9 Pests To Consider

What Is Stripping My Rose Leaves?