Choosing new plants for your home or garden can be tricky without all the correct information. Do you want to get a venus flytrap but don't know how much one will cost? What about where to find a venus flytrap? We will answer these questions and many others throughout this article.

Surprisingly, venus flytraps won't usually cost more than $10 at most major retailers. Considering these plants aren't rare or hard to find, you should be able to get one at any plant store during their peak mid-spring to mid-fall seasons.

Of course, that's not to say the pricing for a venus flytrap or availability will be the same, but in general, you won't break the bank or need to travel far.

As we start, we will cover all things venus flytrap and discuss how much one will cost and where you can typically buy them. Whether you're looking for something new or want to add to your flytrap collection, we're here to help. With that said, let's dive right in! 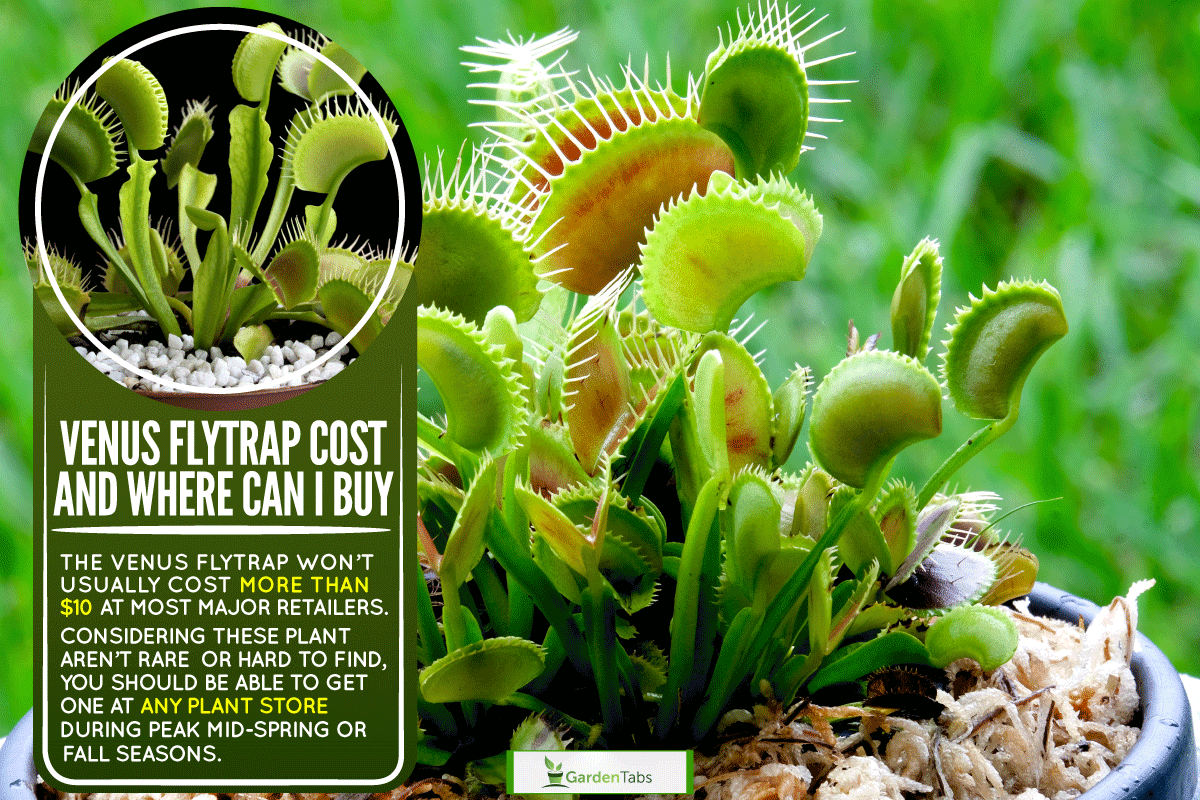 Is Buying A Venus Flytrap Expensive?

No. Purchasing a venus flytrap should not be expensive most of the time. Generally, you can buy a mature venus flytrap for under $10, which is very affordable.

Specifically, FlytrapCare claims that most of these plants go for between $4 to around $7, which is perfect for those buying in bulk.

Considering this plant species isn't rare or hard to find, you shouldn't need to shell out loads of money.

Furthermore, you might even be able to get wholesale pricing on a venus flytrap at specific online retailers, so there are many avenues to try here.

This will depend on where you are and the current plant market, but historically, venus flytraps are one of the cheaper species to buy. 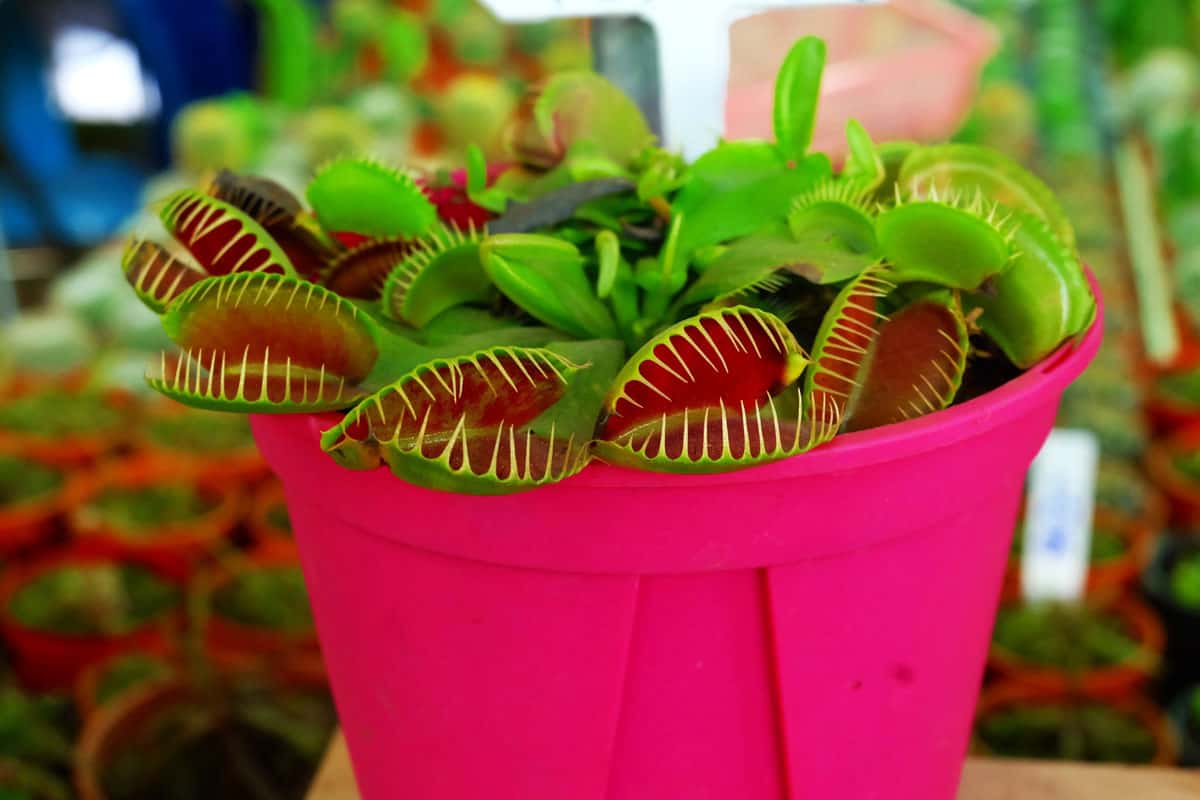 Where Can You Buy A Venus Flytrap?

For anyone wanting to purchase their venus flytrap, you won't usually need to look very far. We have found listings for this species at Walmart, Amazon, The Home Depot, Lowes, Etsy, and various online retailers/nurseries.

As we mentioned above, venus flytraps aren't considered rare, so they'll be available on a more significant scale.

However, venus flytraps can be seasonal, often being sold mainly in the spring and fall. That's because they grow during that time, so most stores will wait to get any in stock.

You can always check with your local nursery before stopping by if it's summer or winter and you want a venus flytrap because they may have some left over.

Regardless of the plant, each species will have a prime growing/harvesting period, so this will be different for everyone.

This venus flytrap will be a mature size, comes in a three-inch pot, requires full sun, prefers distilled water, and has good online reviews from customers.

Yes, venus flytraps are one of the market's most common and cultivated carnivorous plants. As we said, this species is everywhere, whether online or at your local nursery.

Although they aren't always grown indoors, venus flytraps are a staple for many houseplant growers. Therefore, it's common to see them under that umbrella of marketing.

According to the National Wildlife Federation, the venus flytrap is endemic to North and South Carolina, although it's been introduced to a few other states in the US.

Moreover, these are sold at almost all major plant retailers during the spring and fall, so you won't have trouble purchasing one.

Besides being easy to get, venus flytraps are one of the world's most famous carnivorous plant species. You've likely seen them in movies, school textbooks, and museums from the time you were young.

These plants are also perennials, which means they'll come back for years.

Why Are Venus Flytraps So Popular?

Adding to our previous point, venus flytraps are so popular because of their exciting look and behaviors.

Besides being carnivorous, venus flytraps are quirky, and many gardeners refer to them as "a pet that produces very little waste or noise."

Of course, a venus flytrap isn't an animal but behaves a lot like one. Therefore, people tend to be curious about it and increase its ever-evolving popularity.

On top of that, venus flytraps are often used to catch bugs in a house. Since they can detect when a fly/small bug is present, they make for great pest control.

This species is also great for educating children about different kinds of plants and how they function. Many parents will have these in their homes/gardens to share the wonders of a carnivorous plant with their young ones.

It's also common for these plants to pop up in schools for science projects, so they're a big hit among that demographic.

Is A Venus Flytrap Easy To Grow? 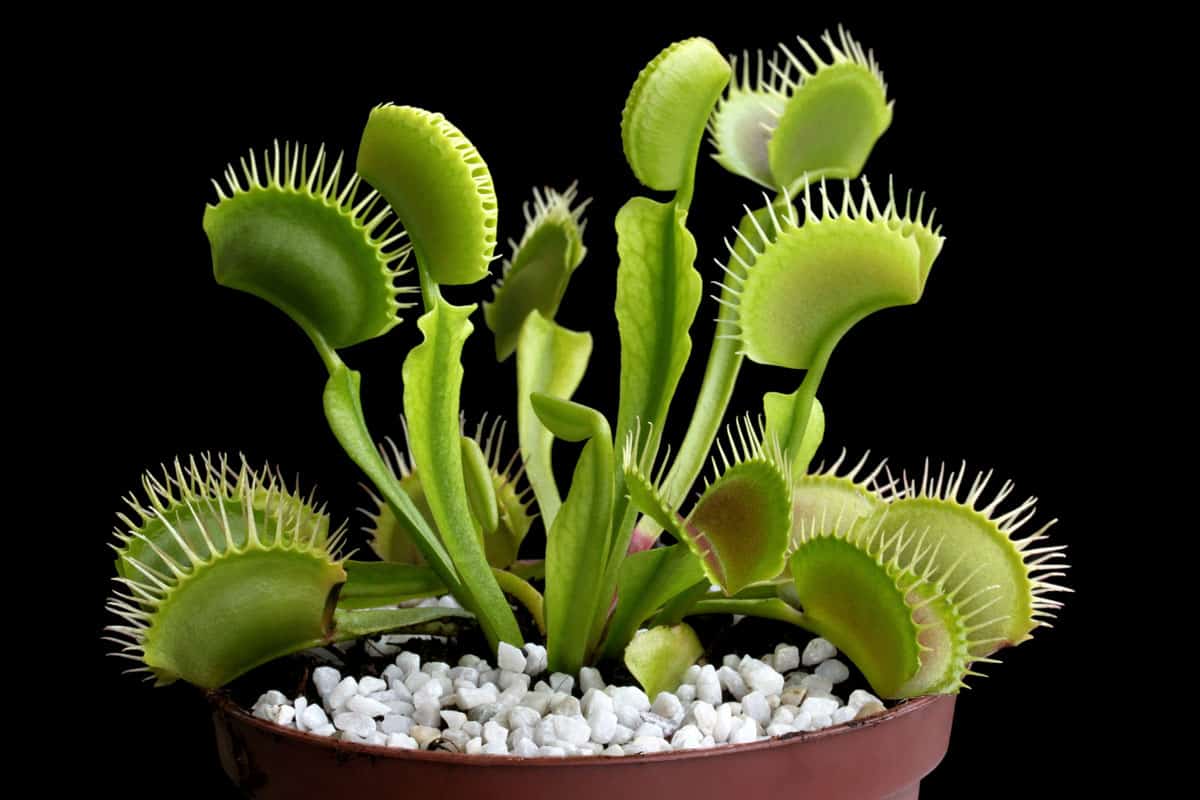 Although they're native to North and South Carolina, growing a venus flytrap in your home or garden shouldn't be too challenging.

Generally, this species thrives in nitrogen-deficient soils, which can be difficult to replicate. That seems to be their one downside, but overall, venus flytraps will be easy to manage.

These plants prefer nitrogen-deficient soil, which triggers them to "hunt" for flies and tiny insects. So, if your potting mix has too much nitrogen, your flytrap may stop eating for a while.

One of the most common mistakes people make with this plant is keeping it out of the light.

Even though venus flytraps look like crazy science experiments, that doesn't mean they don't require nutrients from the sun to live and grow.

You want to place your flytrap somewhere bright and warm, like a window sill.

According to the LA Times, many people forget to take their flytrap out of its initial plastic packaging from the store, which can also lead to death.

How Long Does It Take To Grow A Venus Flytrap?

Now that you have your venus flytrap, you want to know its growth rate. Typically, this species will take three to four years to mature enough to flower.

That said, you can usually find mature venus flytraps at the store for under $10, so this shouldn't be the case for those situations.

Furthermore, if you grow a venus flytrap from seed, it will take ten to 30 days to germinate. That isn't super long, so even if you start from scratch, this entire process won't be too extensive.

Another factor that impacts growth rate is where you have your flytrap.

For example, many experts recommend having these carnivorous plants inside a terrarium, as this will be close to their native environment.

Remember, the more nitrogen-deficient their soil, the better a venus flytrap will do.

Check out this product on Amazon here.

How Long Do Venus Flytraps Live?

Considering this species is perennial, it's possible to see a venus flytrap live for over 20 years. However, 20 years is more focused on plants in the wild, so your houseplant could live between ten and 15.

Again, this all comes down to your maintenance and the conditions you have your flytrap in. As we showed you above, growing your venus flytrap in a terrarium can be better if it's inside.

On the other hand, if you're in North or South Carolina, you can grow your flytrap outside and ultimately see it live for a bit longer.

You want to remember that these plants depend on flies/small insects for their energy. So, your plant may not survive for long if you don't give them enough prey to catch and eat.

These plants rely heavily on photosynthesis to grow, so it is vital to have them in the sun.

How Long Can A Venus Flytrap Go Without Eating?

You can usually expect a venus flytrap to survive without food for about 1-2 months. Although this plant species is carnivorous, it can hold the energy from its last feeding for long periods.

However, if your venus flytrap isn't eating insects, it will still rely on the sun for energy.

So, if yours is in the shade and doesn't have enough food, this is when problems will arise. During long periods without food, your flytrap may go dormant.

If this happens, don't expect yours to grow or look spritely; instead, wind down a bit.

Is Buying A Venus Flytrap Worth It? 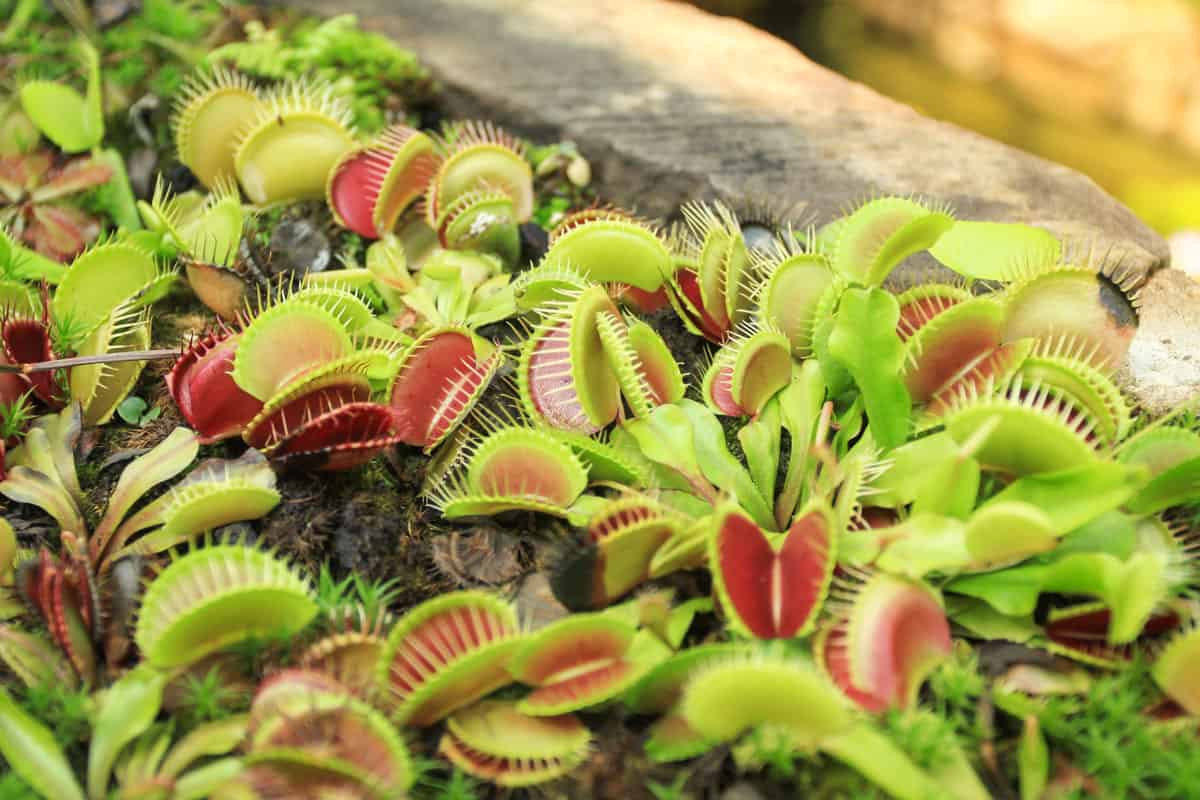 Overall, we would agree that having a venus flytrap is worth it. Besides controlling indoor bug populations, these plants are easy to grow and fun to watch.

Even if you want to keep yours in a terrarium, having a venus flytrap can become a fun hobby for the whole family. Considering these plants live 10-20 years on average, you also don't have to worry about getting new ones yearly.

Moreover, venus flytraps are great for outdoor spaces if you're in South or North Carolina, so that's an option for people in those states. 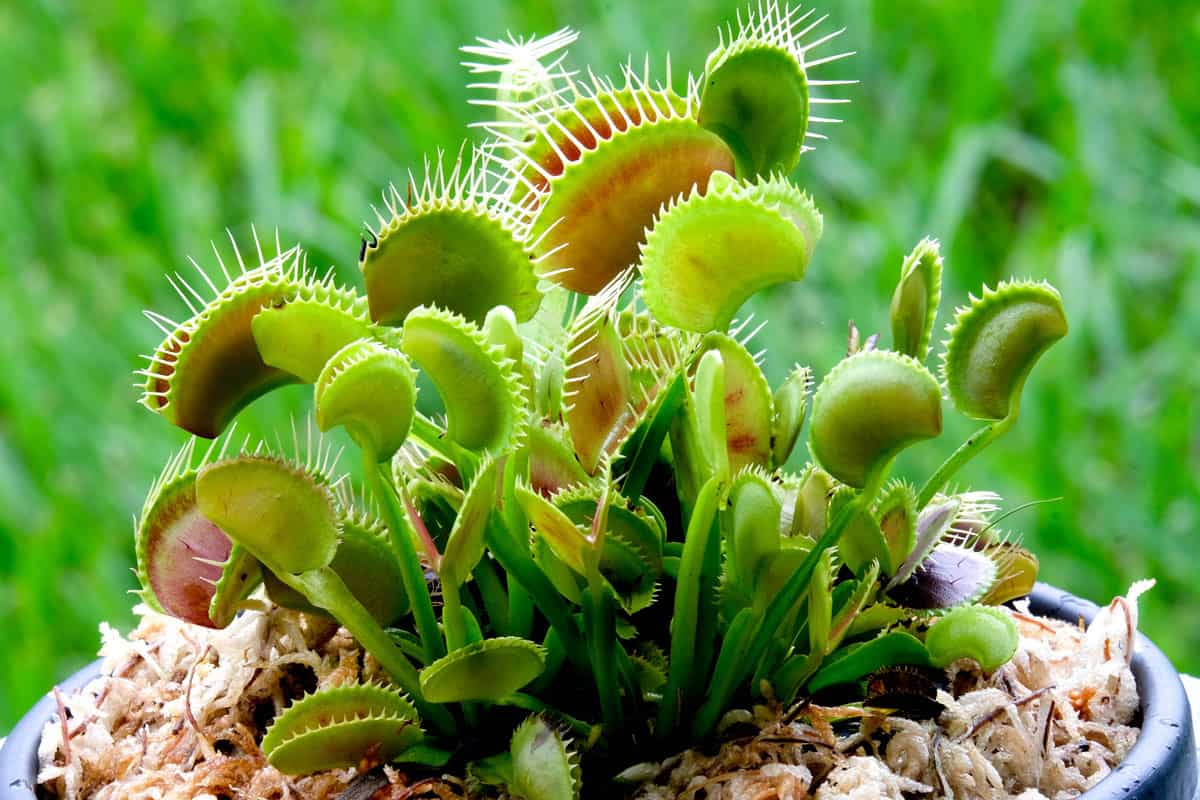 Whether you have a venus flytrap or want to get one, it's always good to figure out their price and availability. We found that venus flytraps shouldn't cost more than $5-$10 and are available at most retailers during the spring and fall.

In addition, growing this carnivorous species isn't too difficult as long as you provide yours with nitrogen-deficient soil.

Remember, your flytrap can go 1-2 months without eating, but it will need good sunlight always.

What's The Best Window For My Houseplants?

How To Grow Bell Peppers Indoors [Inc. From Scraps]

How Tall Does A Schefflera Grow? [And How Fast?]