Liriope or lily turf is an excellent ground cover or edging plant that can survive in difficult-to-grow locations. Each variation of liriope will tolerate difficult conditions. However, there are still differences between each one.

You're in the right place if you're curious about the differences and similarities between the big blue lily turf and variegated lily turf. We've done the research and can tell you more about these two ground covers!

Variegated lilyturf is a variety of big blue lilyturf. They are hardy for USDA Zones 5 through 10 and can tolerate a wide range of conditions, including deep shade, rabbits, deer, and drought. Liriope plants grow from 1 to 1.5 feet tall and 1 to 2 feet wide.

One of the biggest differences between these plants is the leaves. Variegated lilyturf has medium green leaves with milky white edges.

These plants share many similarities. However, the differences in appearance can make it easier to identify each plant. Keep reading to learn more about each type of liriope, how to care for them, and more! 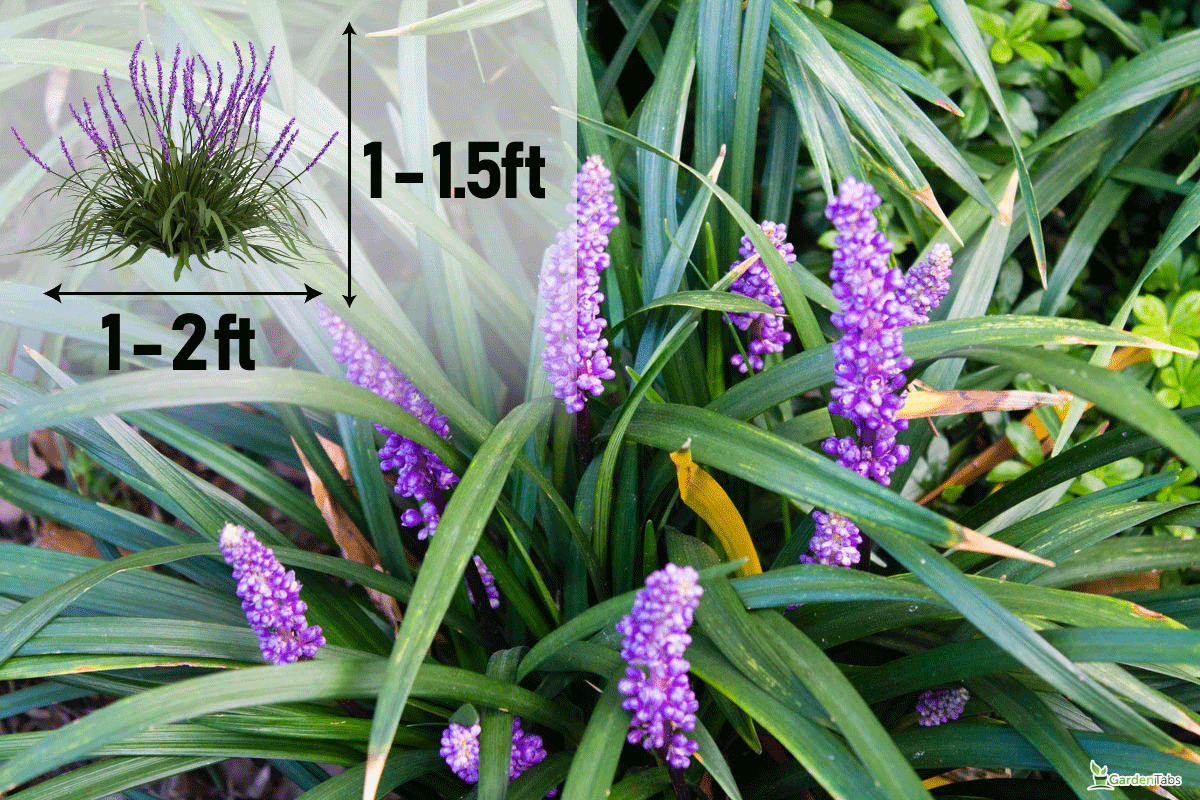 Both the big blue and variegated lilyturf are cultivars of lilyturf. Cultivars are plants that have been propagated to keep the best possible traits.

Since both big blue and variegated lilyturf are so closely related, they share many of the same physical characteristics and can grow in similar conditions. 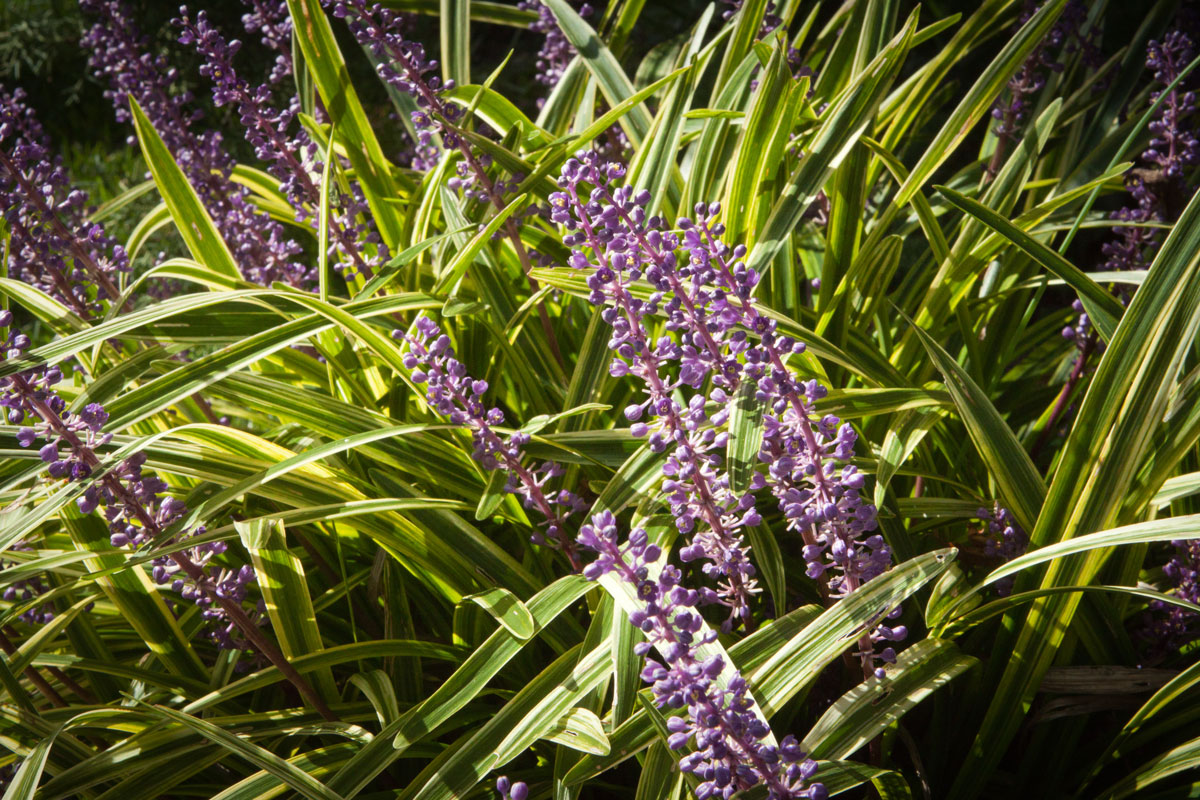 Liriope is frequently called lilyturf because of the low, clumping, and grass-like habit that it forms. However, these plants are not true grasses and are considered to be a part of the asparagus family.

Lilyturf is a herbaceous perennial and has evergreen foliage. You may need to protect these plants from cold winds and frost in cooler regions.

In summer and early fall, you can find purple flowers that resemble hyacinths. After the blooms, you'll see black-colored berries, sometimes all the way into the winter months.

The most common uses for lilyturf are as a ground cover or to mark edges and pathways. In areas that don't receive a lot of foot traffic, you can also use liriope as a replacement for grass.

Big blue (Liriope muscari 'Big Blue') and variegated lilyturf (L. muscari 'Variegata') are considered invasive in some parts of the United States. While these cultivars are less aggressive than creeping lilyturf (L. spicata), L. muscari can still spread and can be difficult to remove once established.

Lilyturf and its cultivars are hardy for USDA Zones 5a through 10b. For best results, you should plant lilyturf in areas that get full sun to partial shade. These plants do tolerate deep shade. However, if planted in these areas, lilyturf will grow more slowly and with longer leaves.

Liriope prefers well-drained and fertile soil with a neutral to slightly acidic pH level. For the first year, you should frequently water to keep the soil moist. After lilyturf is established, it will be able to withstand some drought.

One great thing about lilyturf is how easy it is to grow. This plant will thrive in various conditions and soil types despite doing better in certain soils. Some challenges that lilyturf is resistant to include deer, erosion, heat, humidity, salt, and pollution. 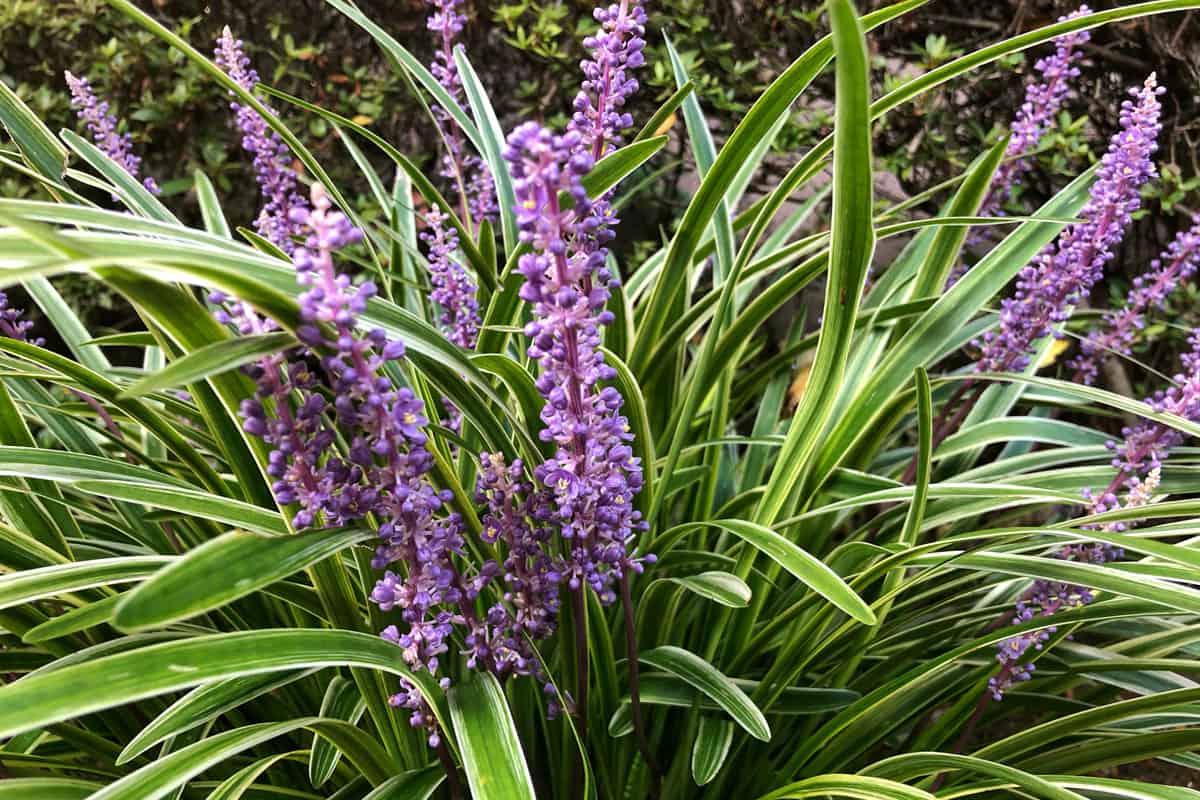 Another difference is in the size of the cultivars. Big blue lilyturf can grow between one and two feet tall. In comparison, variegated lilyturf typically only grows up to 18 inches tall.

Finally, there are some slight differences between these two plants' flowers. Big blue lilyturf blooms can commonly be seen from August until September.

They are more of a lavender color than typical liriope plants. In comparison, variegated lilyturf blooms from August until October. These flowers are more of a purple color than big blue varieties.

How To Grow Liriope

First, plan the area you want your liriope. Keep your lilyturf approximately one foot away from the places you want to border. Break up the soil where you'll be planting. You can also work in compost to help with drainage.

For existing plants, dig a hole that will allow the crown of your liriope to stay above the dirt. Fill in the gap and water deeply. You'll need to keep the soil moist for the first year. Be careful not to overwater during this time, as liriope doesn't like boggy soil.

After the first growing season, your liriope will be more tolerant of drought and require less care.

Need advice for existing liriope plants? Check out "When To Cut Back And Divide Liriope [And How To Do That]"

Take a look at this variegated plant on Amazon!

Check out this big blue cultivar on Amazon!

Can You Grow Liriope From Seed? 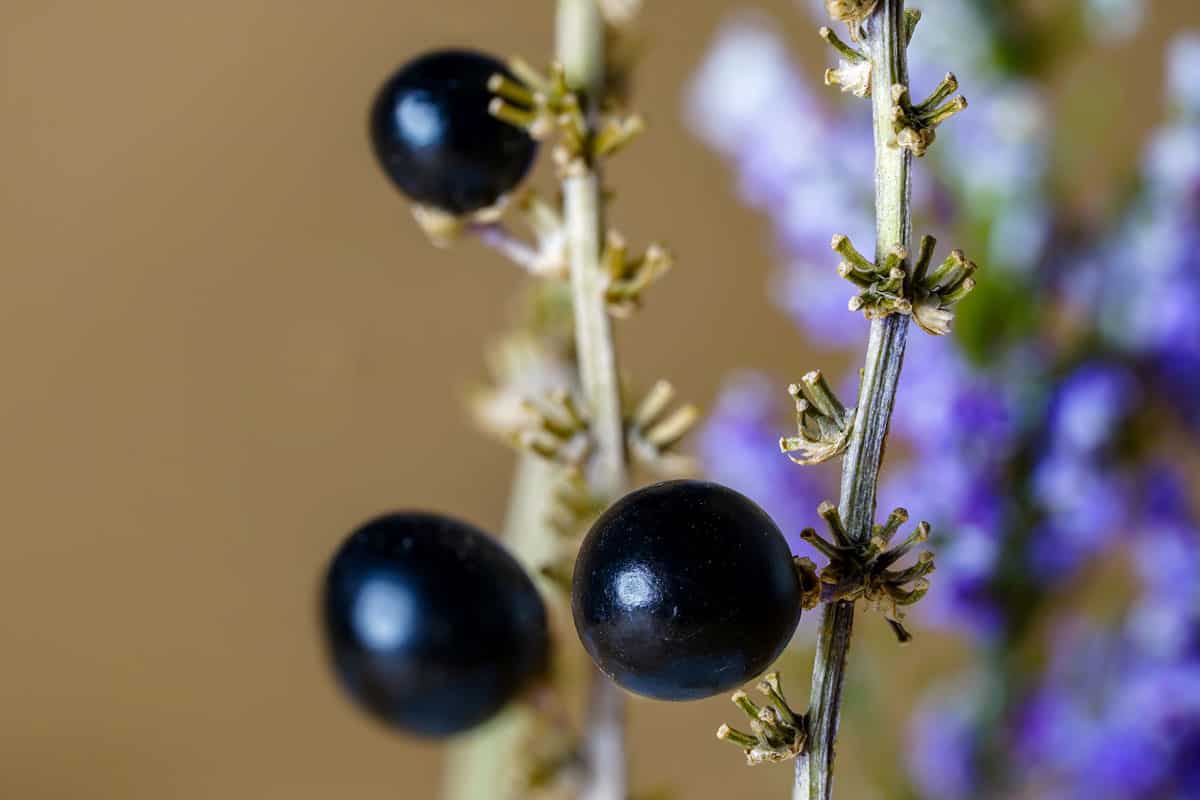 The easiest way to get liriope is by dividing an existing plant. However, you can grow lilyturf from seed if you're patient.

First, you should soak liriope seeds in warm water for 24 hours. Remove any pulp from the seeds at the end of this period.

Next, prepare a solution that is one part bleach and nine parts water. Soak the seeds in this solution for 10 minutes. This step is essential because it will help remove phenolic compounds that can prevent liriope seeds from germinating.

After soaking, remove the seeds and dry them with a paper towel.

Now you're liriope seeds are ready to be planted. Fill a starter tray with potting soil, leaving approximately 2 centimeters of space at the top. Lay your seeds and fill the remaining space with soil—mist with water.

For best results, liriope seeds should be stored in a dark area at temperatures no less than 77 degrees. You should see seedlings in one to two months.

Move your plants outdoors in the spring or fall. Liriope seedlings are more tender than full-grown plants. You'll need to protect young plants from too much sunlight and keep the area free from weeds.

You should water every week until the plants become stronger. Then, you can space watering out for two or three weeks.

Should You Prune Liriope? 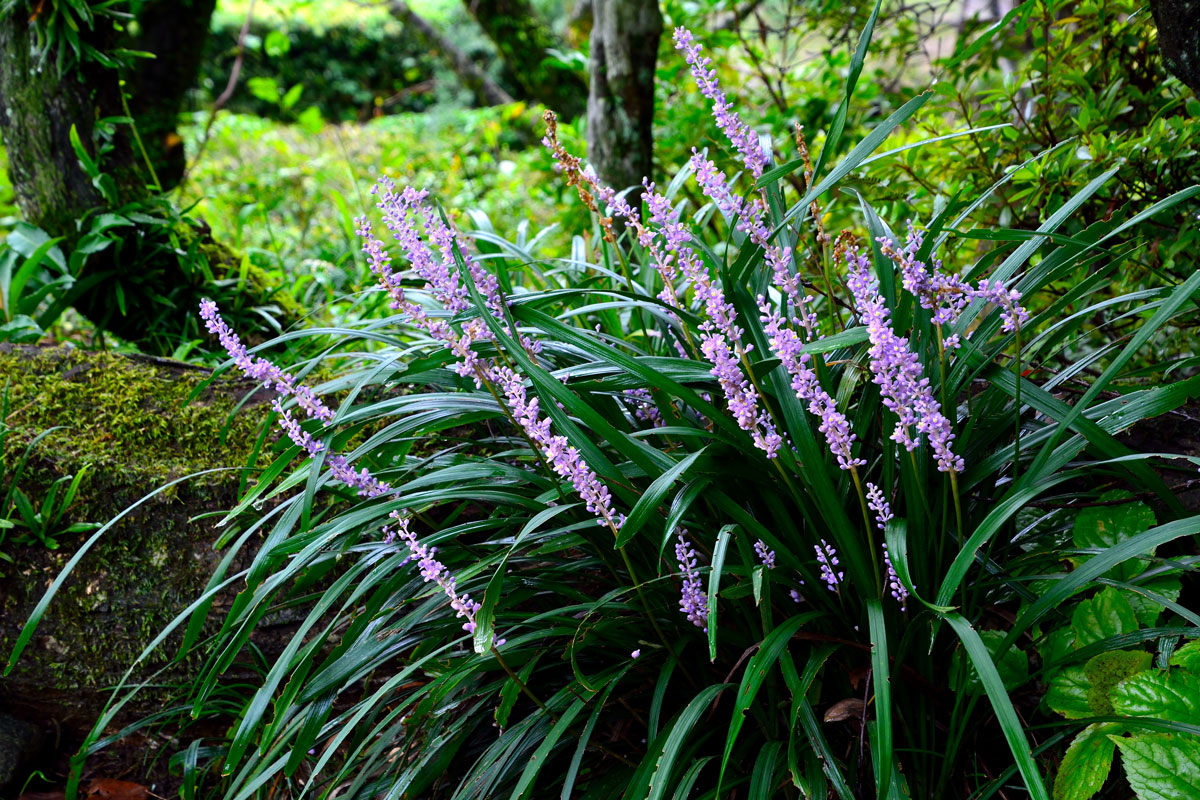 Since liriope spreads via stolons close to the ground, pruning doesn't help control this plant's spread. However, pruning your lilyturf can help keep it free from pests, make it look nice, and can help it grow back when damaged by cold.

Ideally, you should prune liriope either in the spring or fall. Be sure to prune early enough, so you don't remove new and old growth.

You should prune your liriope with garden scissors, shears, or trimmers. If you have a large area of lilyturf, you can also consider using a lawn mower.

Put your lawn mower in the highest setting before trimming. You should also ensure that the blades you're cutting with are sharp.

You can cut these plants down to three inches. If the plant was healthy when you trimmed it, you could add the pieces to your compost pile.

At this point, you can make any amendments to the soil. You can also put down a layer of mulch to keep weeds away until your liriope grows back.

Take a look at these garden shears on Amazon!

As you can see, big blue and variegated liriope plants are incredibly similar. Both of these cultivars require similar soil types and light conditions. The difference between these plants is their appearance.

Variegated liriope is smaller and has purple flowers with green and white leaves. The big blue liriope is larger and has dark green leaves with lavender flowers.