Many gardeners are told to let their potatoes flower in order to get a good harvest. But, that may seem counter-intuitive since you are trying to grow tubers, not fruit. We've researched whether or not to harvest potatoes after flowers have emerged. The answer might surprise you!

You should allow your potatoes to flower. By harvesting after they flower, you allow the potato plant to grow to its potential. However, not all potatoes will flower or produce fruit. Whether your potatoes flower or not, the best time to harvest them is after above-ground greenery starts to turn yellow and die.

Let's take a closer look at why you should let your potatoes flower and how to get the best harvest. 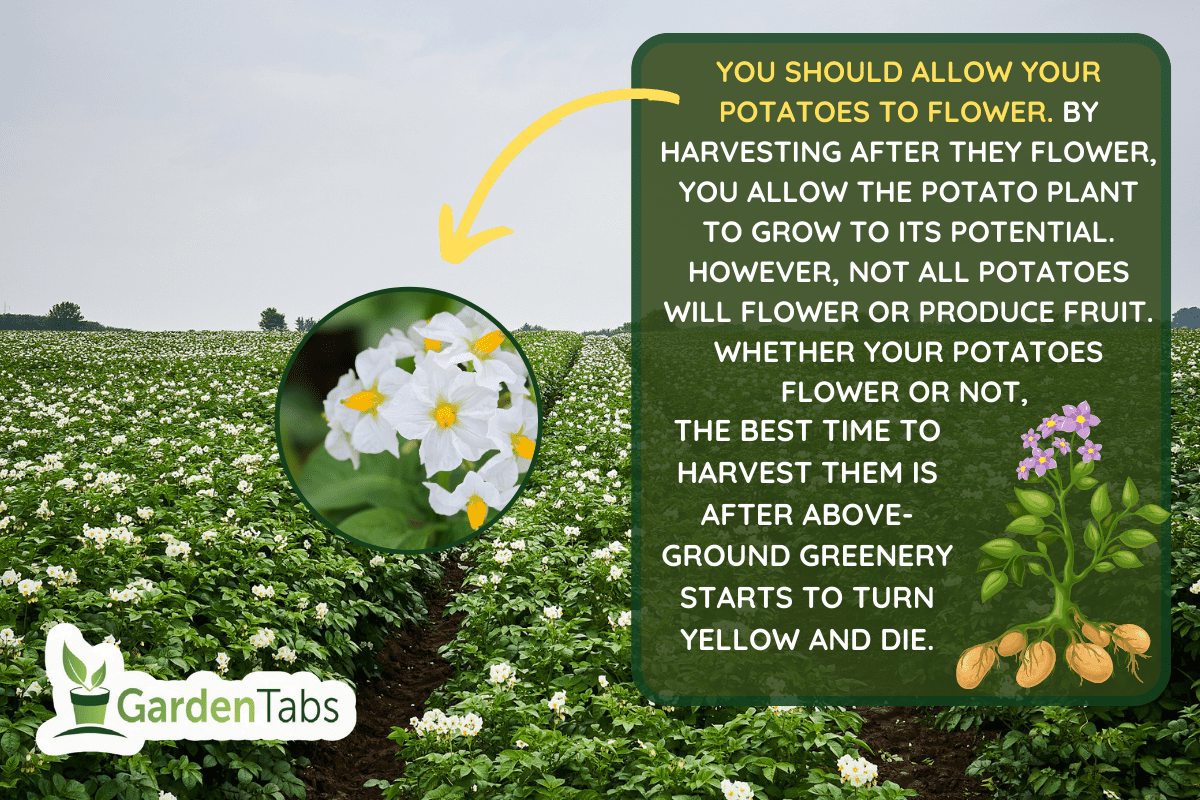 Should You Allow Potatoes to Flower?

Yes, you should allow potatoes to flower. Flowering is a natural part of the potato reproduction cycle. Despite this, if you do not want your potatoes to flower, you can cut off the buds as they appear. The most common way to grow potatoes is by planting seed potatoes. Seed potatoes are popular in part because they are easy to handle. But, many potato varieties flower because they can actually reproduce through seeds. 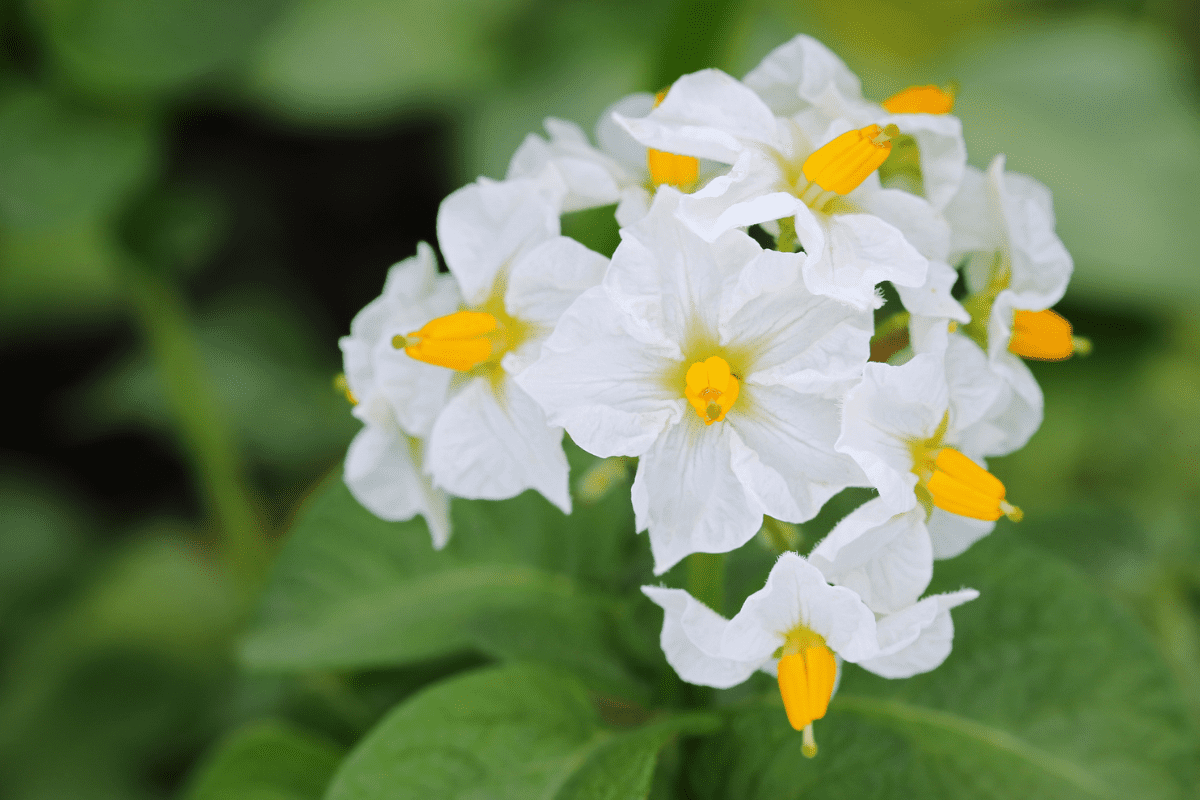 If you have a flowering potato variety, you should let them bloom. This is a sign that it will be time to harvest your potatoes soon. It is also an indicator that your potatoes are healthy, and you can potentially harvest seeds from the fruits your potato produces.

Can You Eat The Fruits of a Potato Plant?

No, do not eat the fruits of a potato plant. The fruits look like tomatoes because potatoes and tomatoes are in the same family, nightshades. While they may look like tomatoes, make no mistake, potato fruits are poisonous to humans and pets! The tuber is the only part of the potato plant that you should be eating. From the stem to the leaves, any part of the potato that is green likely contains a toxic alkaloid.

The reason they are toxic is that potato plants contain large amounts of solanine. This compound helps protect potatoes from the harsh sun and is important for the plant. Unfortunately, it is the same compound that makes some potatoes turn partially green. If you find a green-ish potato, you should cut away the green portions or get rid of the entire potato.

While you can not eat the fruits from a potato plant, you can use them. If you are growing heirloom potatoes, you can use the seeds. They are often called true potato seeds and are used mostly by researchers or plant breeders. If you are breeding a non-heirloom plant, it will likely not produce true seeds. If it does produce seeds, they are likely not viable, and you should test them before trying to plant them.

Do All Potato Varieties Flower? 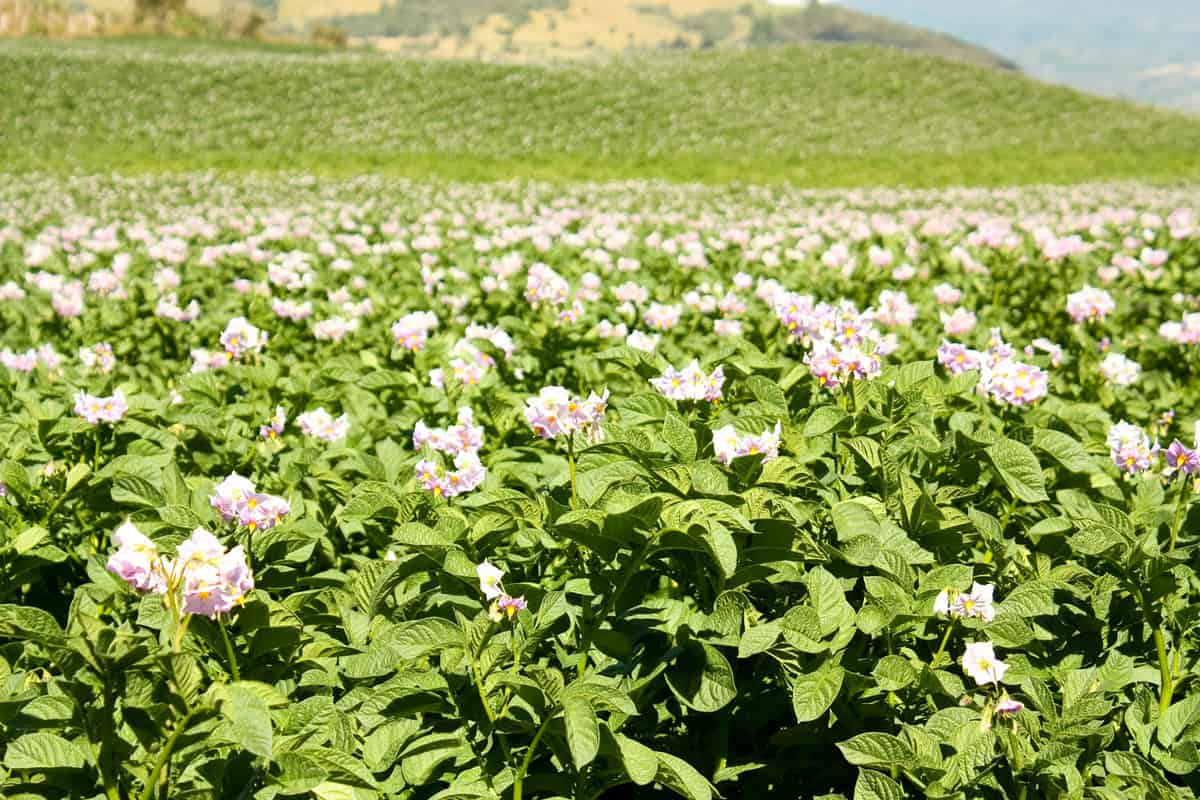 Some gardeners like to harvest their potatoes once the tops have turned yellow, but the rest of the plant is still somewhat green. This is because it may be easier to pull out of the ground. On the other hand, some gardeners prefer waiting until the entire plant has turned yellow and died off. This gives the potatoes as much time as possible to grow.

Can You Dig Potatoes Before They Have Flowered? 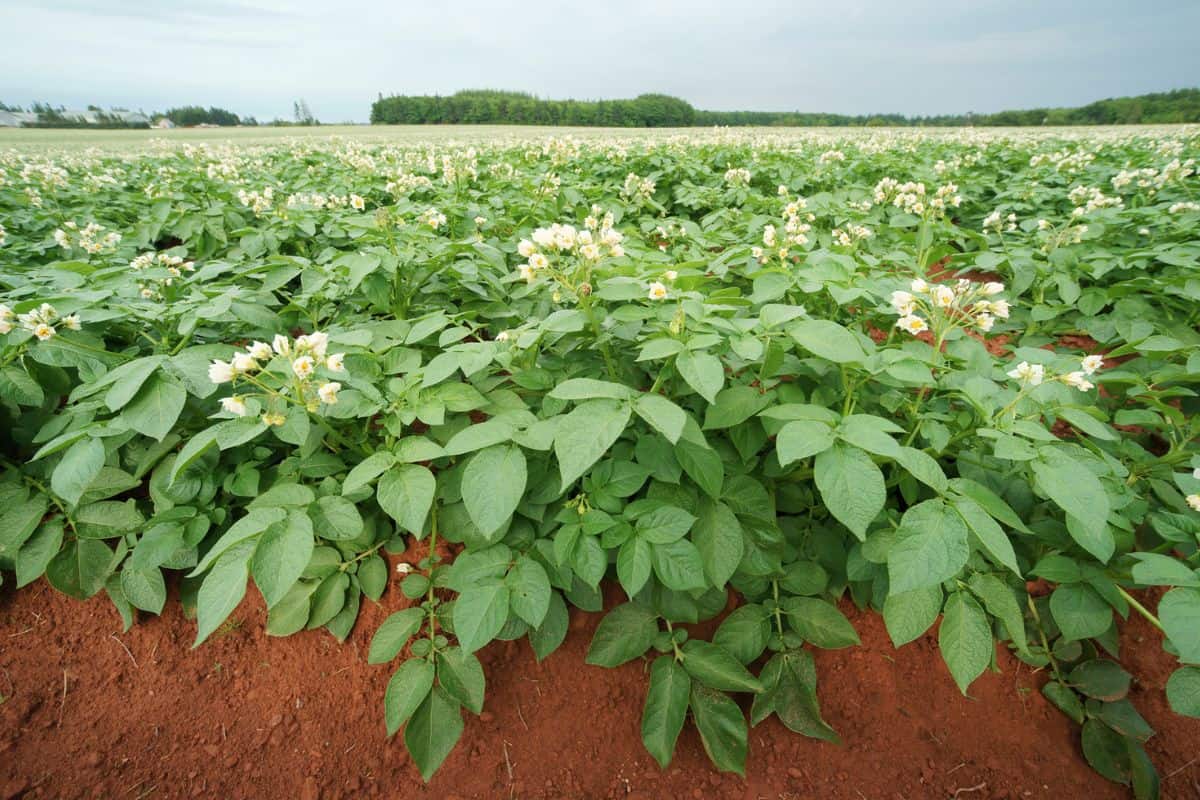 On the other hand, if you are expecting a long frost, it may be better to dig early. At least by digging your potatoes early, you would get some yield. By waiting out a hard frost, you would risk losing the entire harvest. If you are expecting a short frost, you can use a small greenhouse or frost cover to give the potatoes more time. However, this generally does not work well for a long-term solution.

Click here to see this plant cover on Amazon.

When Should Potatoes Flower?

Like most plants, potatoes flower in order to be pollinated and produce the next generation of plants. Because of this, potatoes flower towards the end of their lifecycle. Potatoes usually flower after around 10 weeks of being in the ground. However, depending on the climate and variety, they may flower much later or not at all.

Once a potato plant blooms, it is at maximum maturity and usually will not grow much after that. So, if your potatoes flower, it is a sure sign to harvest soon. Many people recommend harvesting shortly after the flowers have died off. Likewise, when flowers appear, you can water less or even not at all. This is supposed to let the potatoes harden and cure before they are harvested.

What Happens If You Don't Harvest Potatoes? 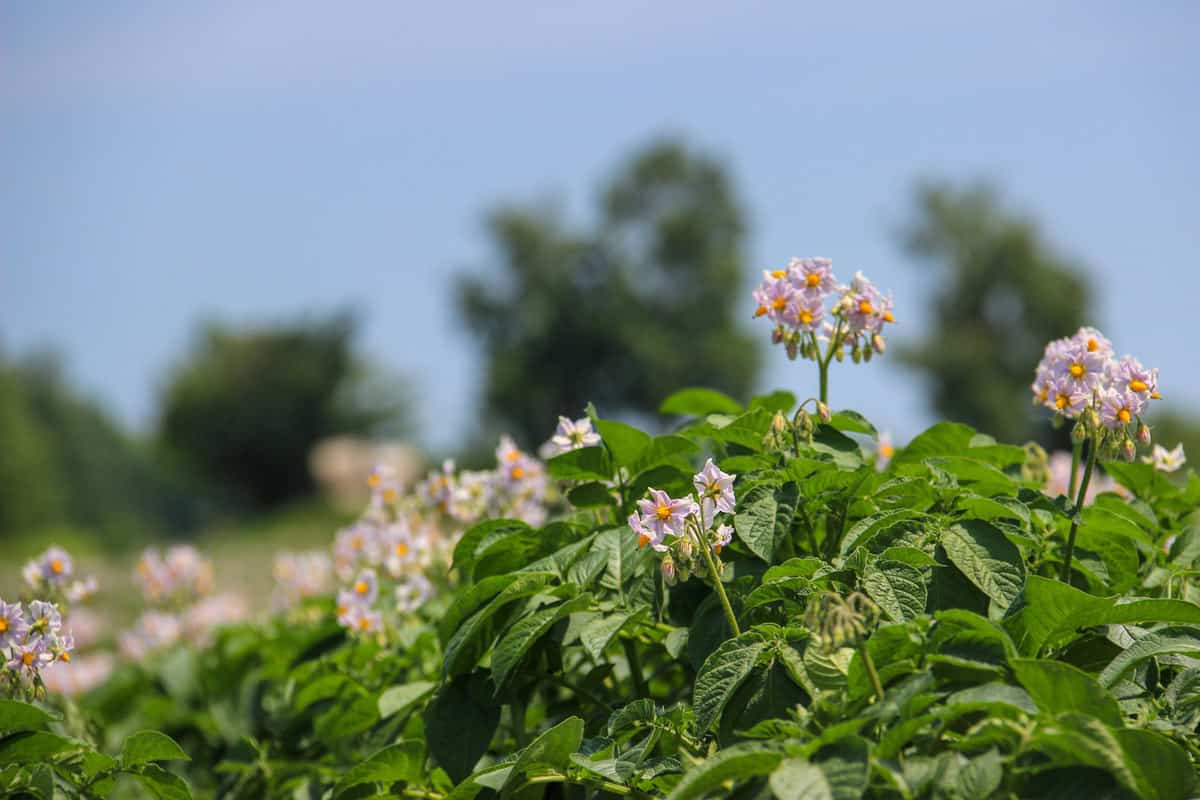 If you do not harvest your potatoes, they will likely rot. The tubers will also possibly freeze if you live in a cold area. But once they have defrosted, if they are not dug up, they will rot. While rotting potatoes is not a good thing, it could be worse. At least the nutrients can be reabsorbed back into the soil as organic matter.

If you live in a warm climate, there is a chance the tubers will survive through the winter and produce new potato plants. However, it is better to dig the potatoes and prepare a few to be used as seed potatoes for the following year.

Even if you live in a warm area and the potatoes do not freeze, they could very well still rot. While digging the potatoes may take more effort, it is best to ensure a good harvest for multiple years. By harvesting and replanting seed potatoes, you have more control over how many grow and where they are located.

If you leave potato fruits unharvested, they will drop and potentially produce new potatoes. If they do not freeze or get eaten by animals, first. So, it is best to harvest potatoes and their fruits if you can. While the results will not necessarily be bad, it is worth the effort since it will help your garden produce most efficiently.

Want to learn more about potatoes and other vegetables? Grow your green thumb with these informational posts:

15 Vegetables That You Can Grow Indoors In Winter

How To Grow Potatoes In A Container Indoors

15 Vegetables That You Can Grow Indoors In Winter