Deciding how to landscape your garden can sometimes feel daunting without the correct information. Do you have a hickory tree and want to plant something under it but don't know where to start? Is it easy to grow things directly below a hickory tree?

We will answer these questions, and others, throughout this article. Let's discuss everything below!

There are plenty of plant options for anyone with a hickory tree. Some of our top picks include mountain mint, wild ginger, white snakeroot, wild ageratum, white wood aster, sedum, monarda (beebalm), evening primrose, and creeping phlox.

That said, as long as the plant species you grow can tolerate juglone (hickory trees produce it), it should be fine.

As we start, we will cover all things hickory trees and discuss what plants to grow underneath one. Whether you want to add some color to your landscaping or are curious about hickory trees, you've come to the right place. With that said, let's get straight into this topic! 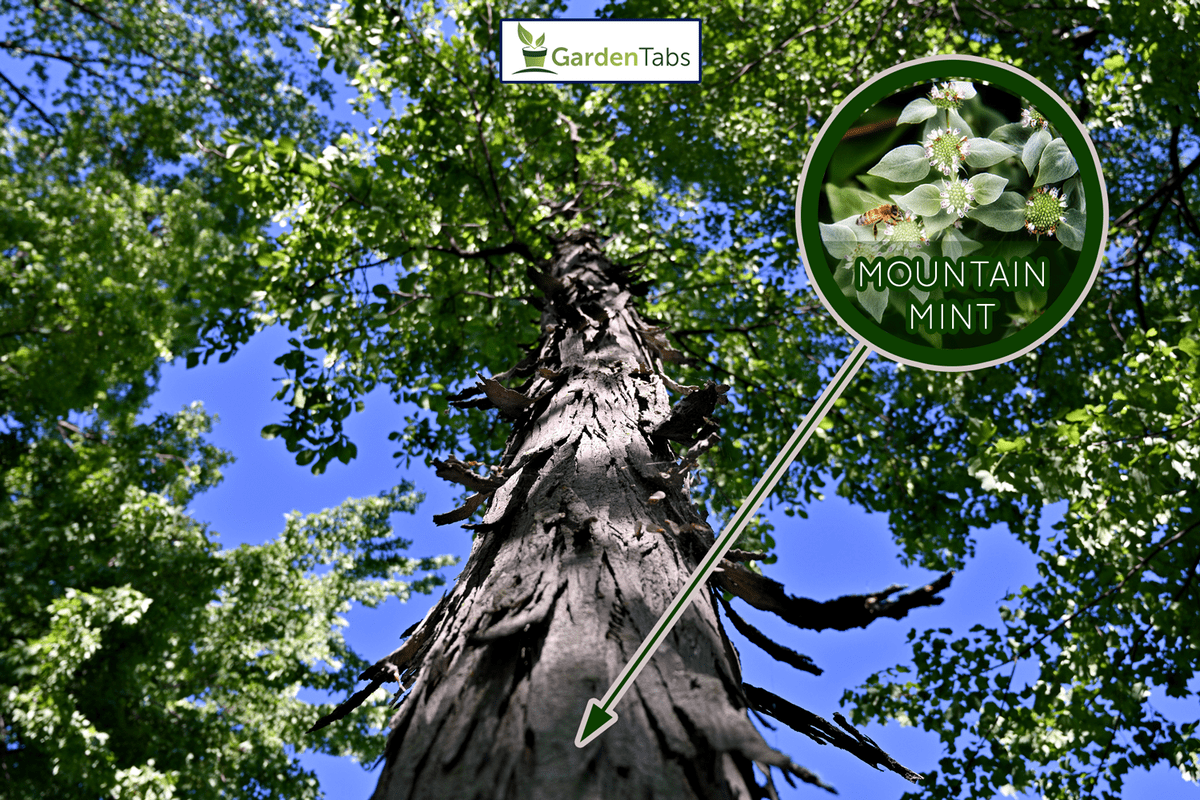 Can You Grow Plants Under A Hickory Tree? 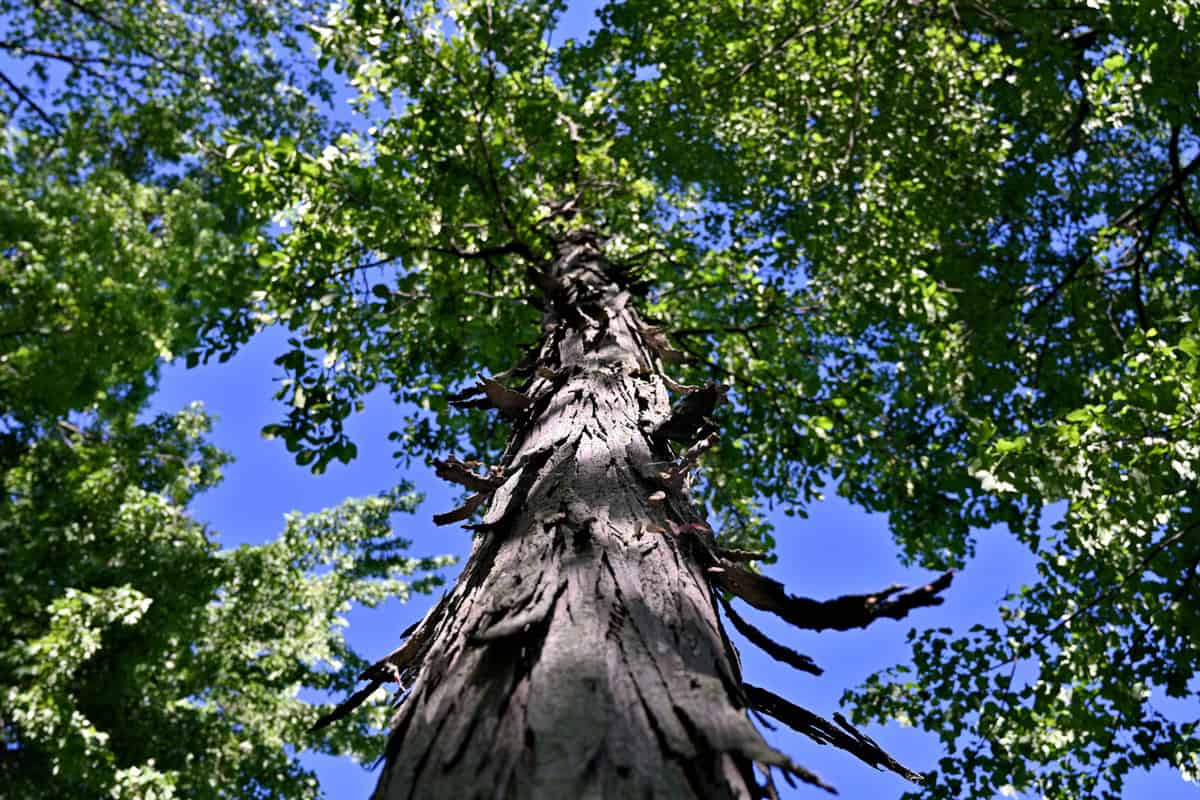 Yes, you can usually grow plants under a hickory tree. However, the species you plant must be tolerant to the often toxic substance "juglone" that hickory trees produce.

Hickory trees also have taproot systems, meaning they sprawl deep into the soil. Therefore, whatever other plants you decide to grow need to be non-invasive and short-rooted.

The last thing you want to do is create competition in the soil beneath your tree, as this can lead to plant death or illness.

Hickory trees are also best grown in acidic soils, so the other plants you grow beneath need to enjoy a bit of acidity. The key here is finding a species that doesn't need much attention, sun exposure, ground space, and doesn't mind moister soil.

Do Hickory Trees Have Invasive Roots?

Although the hickory tree's root system tends to grow outwards, it isn't considered invasive. Generally, you can expect your tree to have a taproot system, usually spanning 1-3 feet within the first year.

This tree species isn't known to be aggressive root-wise, but that's not to say other plants nearby will always be 100% safe.

As we mentioned, growing plants with shallow roots below a hickory tree is imperative to avoid direct competition in the soil.

That goes for any tree species, as your larger, more established plant will usually overpower any new, smaller one.

You should remember that growing multiple plants within one section of land isn't always doable. For example, if too many root systems are taking nutrients, oxygen, and water from the ground, this can cause it to become infertile.

Once that occurs, it's likely to see both your tree and underlying plant(s) become sick or even die.

What Plants Grow Underneath A Hickory Tree? 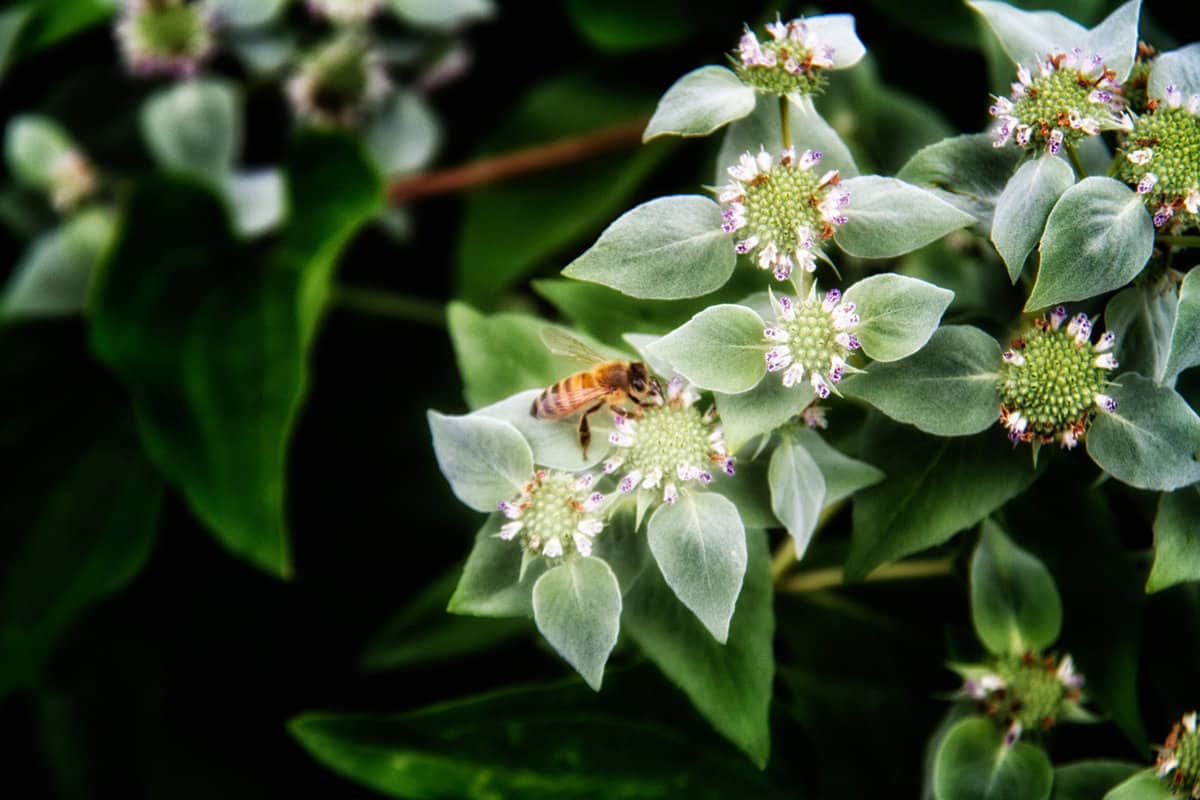 Now that you know the basics of a hickory tree, it's time to figure out what plants you can grow beneath one. As we covered earlier, a few great choices for underneath hickory include:

You can expect all of these plants to handle the toxic substance juglone, which your hickory tree will produce. Not only is that great news for your landscaping, but it means you don't have to worry about potential death to anything growing beneath your hickory.

Furthermore, these plants will have relatively shallow roots, which is required for growing near or under a hickory tree.

Even though hickories aren't necessarily invasive, that doesn't mean their roots won't become entangled with nearby ones.

You also want to remember that whatever you grow beneath a tree, hickory or not, won't get much sun. Typically, if a tree's canopy is expansive, it's likely the plants underneath won't receive more than a couple of hours of sunlight daily, so keep that in mind.

No. Generally, the nuts from a hickory tree shouldn't affect the ground's pH. As we said, hickory trees tend to grow better in acidic soils, but they don't necessarily create that for themselves.

On the other hand, your hickory tree will affect the soil in terms of toxicity. Not only will the juglone they produce seep into the ground, but it can also affect nearby vegetation.

Again, this won't be an issue for the plants we listed and others, but it's good to double-check before planting anything below your hickory.

To grow hickory, soil conditions will need to be on the more acidic side, so whatever you add below your tree must also share a love for that. Also, you can amend the soil if there's too much/too little acidity present, so this isn't a complicated fix.

Can You Grow Grass Underneath A Hickory Tree? 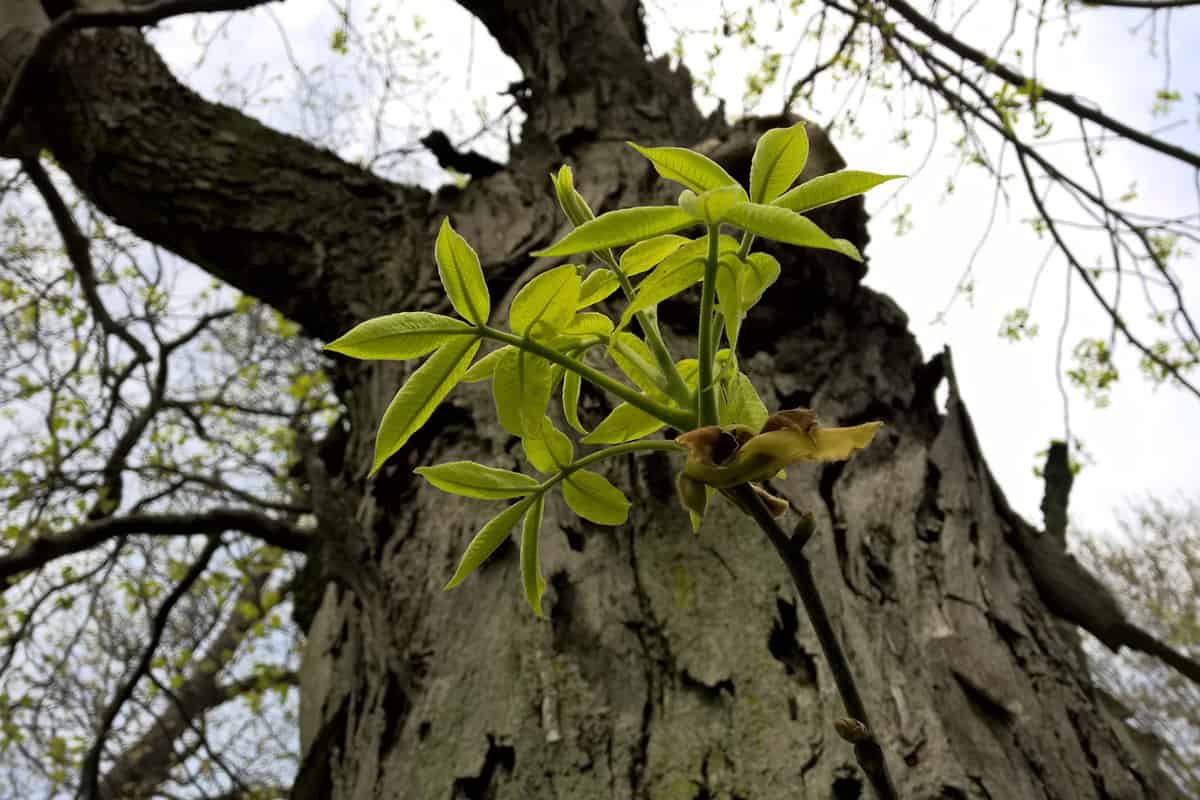 For those wanting to try and grow grass under a hickory tree, expect a challenge. Growing a lawn requires particular conditions, which aren't always possible beneath a tree's canopy.

Specifically, grass requires adequate sun exposure (upwards of six hours) each day, which you won't see under a hickory tree.

That said, you might be able to grow a shade tolerant grass variety beneath your hickory, but it also needs to be able to withstand the somewhat toxic conditions your tree produces.

For this reason, it's not always easy to maintain a lush, healthy lawn surrounding hickory, so this isn't usually a common landscape choice.

Instead, many gardeners choose to grow flowers or small shrubs beneath their trees, which don't need as much sun or attention as grass.

Are Hickory Trees Toxic To Other Plants?

Yes and no. As we mentioned, the substance juglone is made by hickory trees and seeps into the ground nearby. Not only can this cause trouble for plants underneath a hickory tree, but also those within arm's reach.

Many experts recommend playing it safe by planting anything new at least 80 feet away from hickory, although this isn't always required.

You can usually find out whether a plant is juglone resistant or not at the nursery or online, so we recommend doing some investigating beforehand.

Are Hickory Trees Easy To Grow?

In general, you can expect a hickory tree to grow pretty easily. Not only is this species beautiful to look at, but it also is self-sustaining and doesn't often require much attention.

With that said, there are some conditions you'll need to meet to grow a hickory tree. Most importantly, their soil needs to drain well.

If a hickory tree sits in water, it will start to die off. Furthermore, these trees aren't very picky in terms of soil type, meaning they'll likely do okay in even clay soils.

You also don't need to prune hickories often, so they're perfect for anyone with a busy schedule. As we covered above, the ground around your tree should be acidic, as hickories don't like alkaline ground conditions.

For those wanting to try a hickory tree, they grow best in the Eastern and Midwestern United States, so moderate weather through the summers and colder winters.

You can also often find them growing near streams, rivers, and bottomlands.

How Big Will A Hickory Tree Get?

On average, a hickory tree will reach heights between 60 and 80 feet. Of course, this can depend on the conditions surrounding your tree and upkeep, so it's possible to see yours be taller or shorter.

You can also expect a hickory tree to reach around 40 feet wide, so its canopy will be impressive. Therefore, growing plants nearby or underneath hickories can be tricky.

These trees are known for their beauty and edible nuts, all while being perfect for generations to enjoy.

When it comes to their lifespan, you can see hickory trees get as old as 200-300 years, which is impressive. Again, this will be slightly different according to location, soil conditions, and upkeep, but expect a hickory tree to be a staple in your garden for decades. 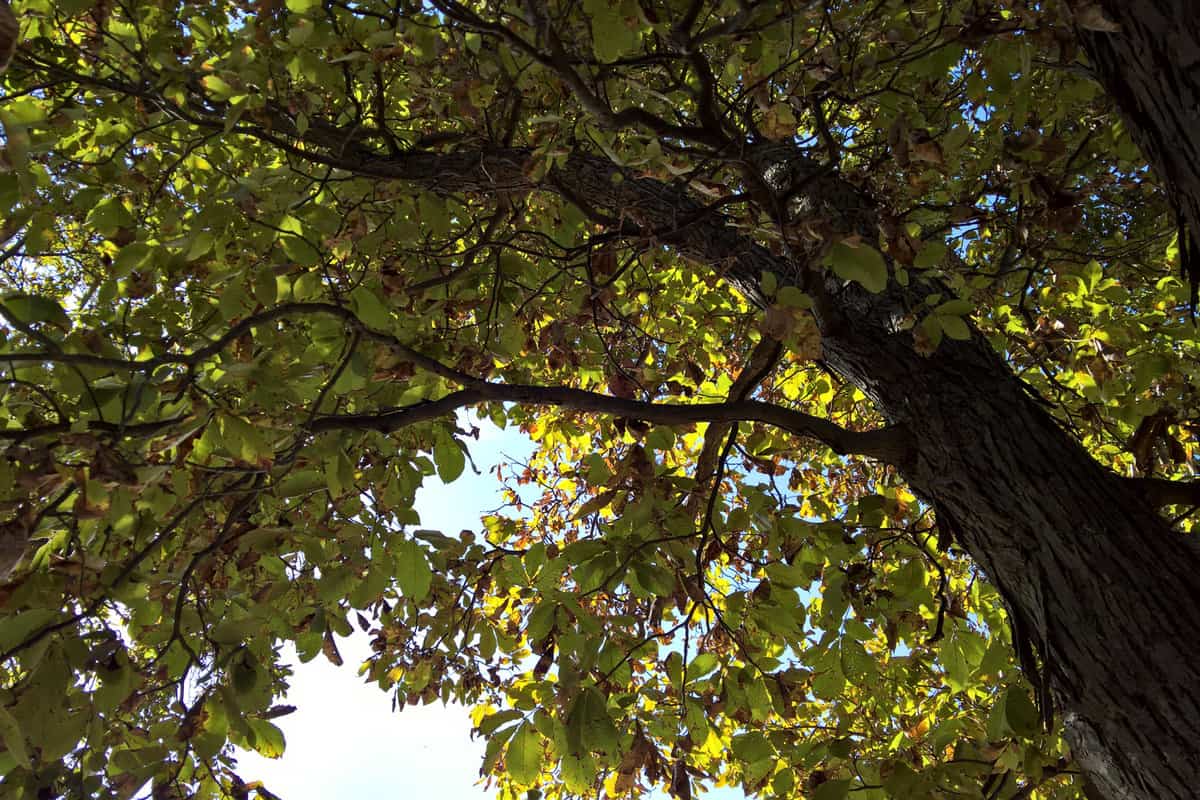 No, it isn't typical for hickory trees to fall easily. These trees will generally be sturdy and have expansive root systems, which hold them in the ground.

Besides withstanding winds, hickories develop deep, expansive taproots, which are a significant advantage for them.

On the other hand, this dense root system can spell trouble for nearby trees and plants, so that's something to remember.

Generally, longer-living tree species will have more expansive roots, which keep them alive for so long. These deeper roots can also come in handy during drought, as they can hold water better.

One drawback of the robustness of the hickory tree is that they aren't always suited for urban gardens.

For example, it's not always possible to grow one in a smaller space, as the roots of your tree can damage structures nearby.

Whether you have a hickory tree in your yard or want to grow one, it's always good to know what other plants can develop nearby. From what we found, countless species can withstand the toxic substance juglone your hickory will produce.

In addition, hickory trees will have dense roots, meaning whatever else you plant nearby must be non-invasive and shallow-rooted.

Introducing too many competing root systems in one section of land can lead to death, which you want to try and avoid.

Regardless, research whether your plant can tolerate juglone, and don't forget to give your hickory enough room to develop and sprawl!

Made it to the end? Check out these helpful related gardening posts below!

What To Plant Under Cherry Trees? 11 Great Suggestions!

What To Plant Under Redbud Trees [Flowers, Grass, & More!]

4 Best Ground Covers (Much) To Put Under Pine Trees