Brassicas go by many names, including cruciferous vegetables, cole crops, and cabbage or mustard plants. Whatever you choose to call them, these plants are a popular choice for many vegetable gardeners. However, if they're looking droopy or wilted, you'll probably want to know why and what you should do. Luckily, you're in the right place! We've done the research and will answer your question right here in this article, along with some other helpful hints about growing brassicas.

Brassicas can become droopy and wilted for a number of reasons, including:

Depending on your individual plant's problem, reviving the brassica might include adjusting the amount of water intake, removing the affected parts of the plant, or destroying the maggots. Unfortunately, in some cases, the plant may be too infected to survive and will have to be removed and destroyed.

In the rest of this article, we'll talk about each potential reason your brassica is wilting in more detail. We'll also share helpful hints for fixing the problem and even avoiding it in the first place. So, let's get started! 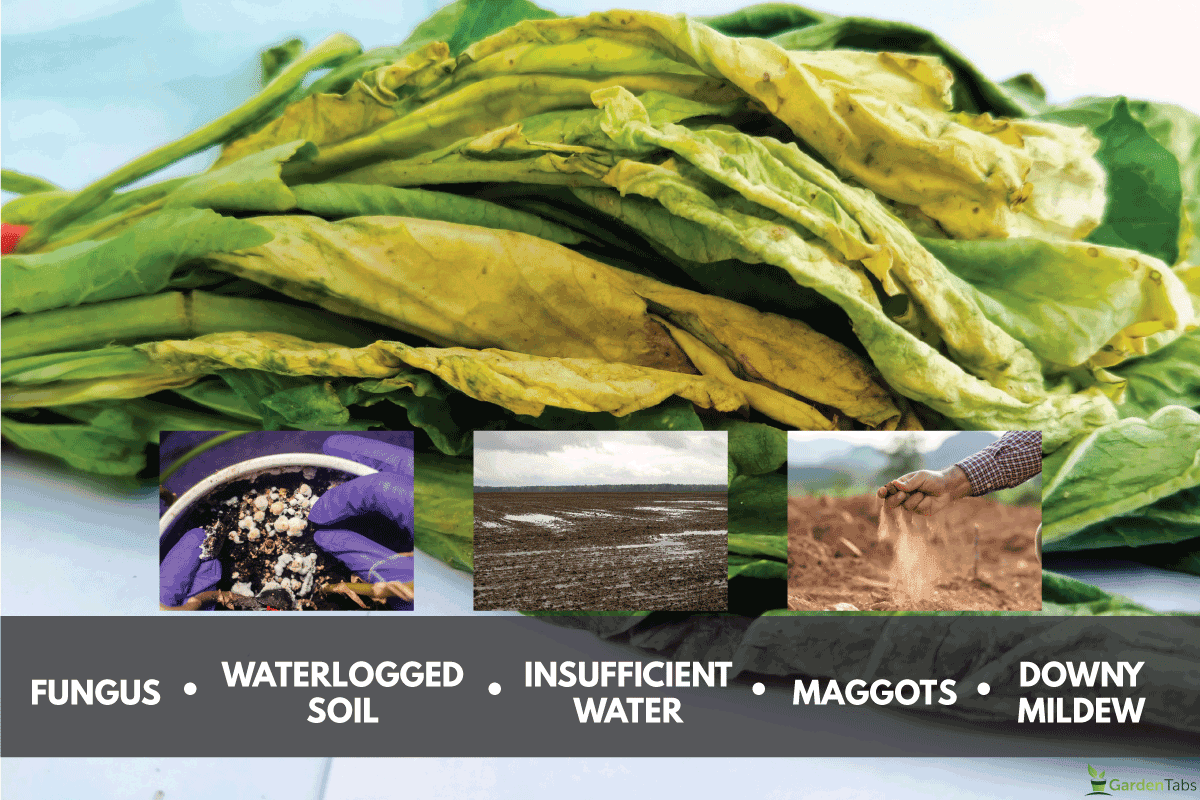 Why Is My Brassica Drooping And Wilting?

Brassica is a genus of plants in the cabbage and mustard family. This includes broccoli, Brussels sprouts, cauliflower, kale, collard greens, cabbage, mustard cress, turnips, arugula, and more. Although this might look like a diverse list of vegetables, they are actually all closely related.

Unfortunately, though, brassicas are prone to a number of health problems that can make them droop and wilt. At the top of this list are fungus and mildew.

This includes downy mildew, blackleg fungus, clubroot, and white blister. If your brassica is affected by one of these, it will require some special care to get it healthy again.

Sometimes, however, not enough or too much water can cause drooping and wilting. After heavy rains, the soil can get waterlogged. The roots can get overwhelmed when this happens and make the leaves soggy and wilted. Or, if the brassica doesn't have enough water, the leaves might shrivel and droop. 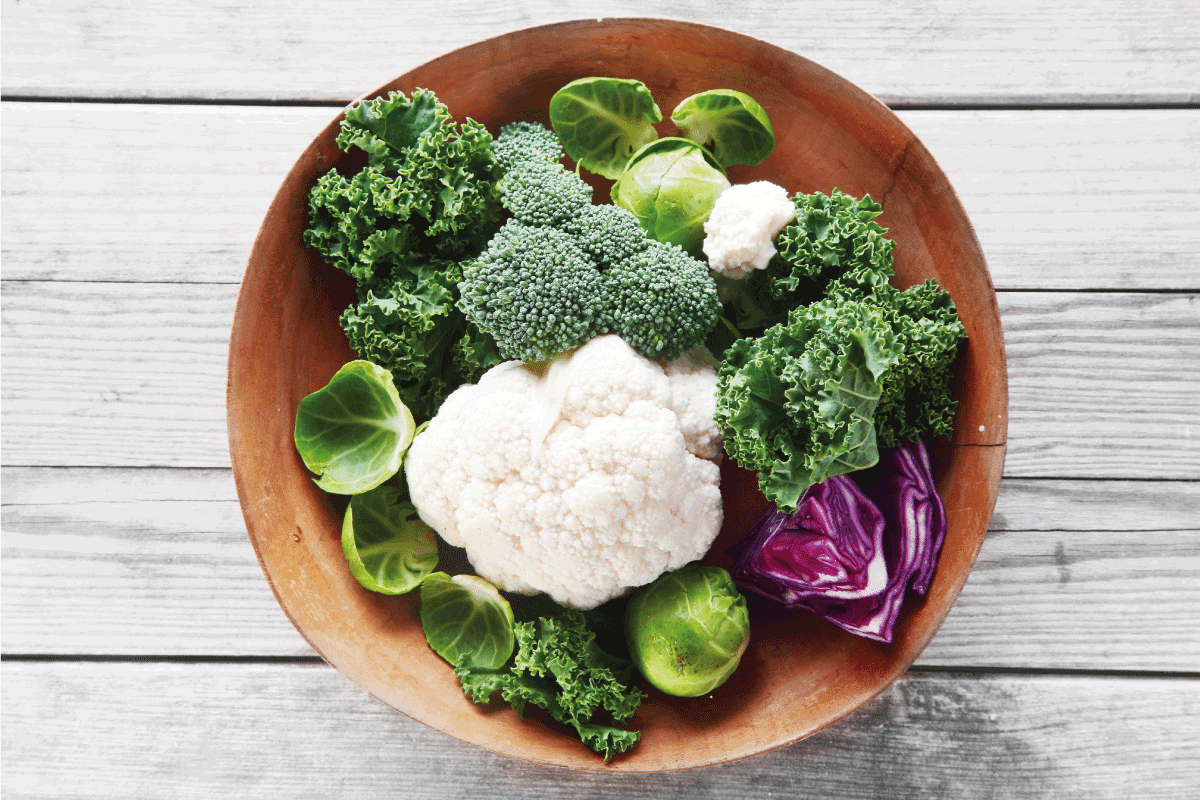 How To Fix Fungus In Brassicas

Brassicas are targeted by several different types of fungus, and treating each requires a unique approach. But don't worry—we'll share some of the best tips for countering three of the most common types of fungus right here.

As you care for your fungus-infected brassicas, it's important to properly discard any infected plants you've removed. That's because even if the plant is dead, the fungal spores might not be. To avoid reinfecting your garden, securely bag your plants and throw them in the trash.

Crop rotation is another tactic that helps reduce the risk of fungus for most brassicas. This refers to the practice of growing a different crop each year in the same area of your garden.

Rotating between two or three different crops is typically sufficient. Crop rotation works because when the same plant grows in the same place for several years, it can deplete the soil's supply of its most-used nutrients. Rotating the crops can help restore much-needed nutrients and get rid of fungus and pests.

For more information on crop rotation and brassicas, check out our article Can You Plant Brassicas After Potatoes Or Tomatoes? 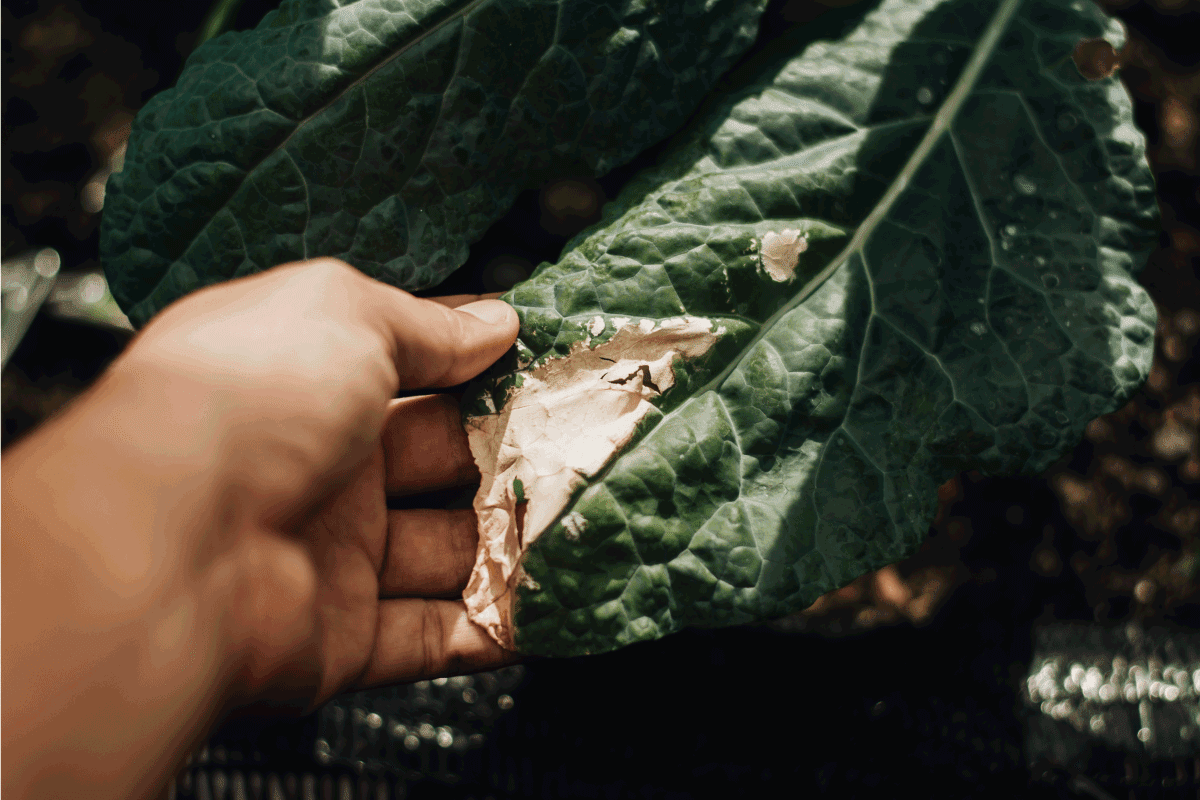 Downy mildew is caused by a fungus-like organism called Hyaloperonospora brassicae and looks like fuzzy white spots on the underside of the affected leaf.

Because it's caused by wet conditions, monitoring your soil's dampness can make a big difference. You should also keep an eye on weeds growing near your plants because they can also carry the fungus.

The best way to prevent downy mildew before it happens is to space your plants widely enough to allow for airflow, and try not to let your brassicas get too wet or waterlogged.

If you find downy mildew, you'll unfortunately need to remove and destroy the affected plant. That's because downy mildew spores spread quickly and easily in the wind and rain.

Blackleg fungus looks like light brown cuts outlined in purple and accompanied by black dots. It usually appears on the leaves and stems of brassicas. If it's left untreated, the lesions can become deep enough to cut through the stem and kill the plant.

Because blackleg fungus can have such serious consequences, it's important to address it as quickly as possible.

Luckily, plants can recover from this fungus. Simply remove any affected leaves and dispose of them properly. To prevent blackleg fungus before it occurs, soak your seeds in water that is 122 degrees Fahrenheit. Cauliflower seeds can be soaked for 20 minutes, while cabbage seeds can soak for 25 minutes.

Clubroot makes plants develop galls, or spots that affect the plant's ability to take in water and nutrients. This can make the roots become engorged and the leaves droopy and wilted. Unfortunately, due to clubroot's aggressiveness, any affected plants need to be immediately removed and destroyed.

After clubroot has infected your brassicas, it can be difficult to completely eradicate this fungus from the soil. However, you can still safely grow brassicas in affected soil if you follow a few tips.

First, make the soil unappealing to clubroot by reducing the acidity and drying it out. Next, make sure to immediately harvest any vegetables, even if you're not planning to eat them.

If root vegetables like turnips rot underground, they'll provide prime clubroot conditions. Finally, stay on top of weeding, because weeds can spread the fungus to your plants.

How To Fix Water Problems In Brassicas 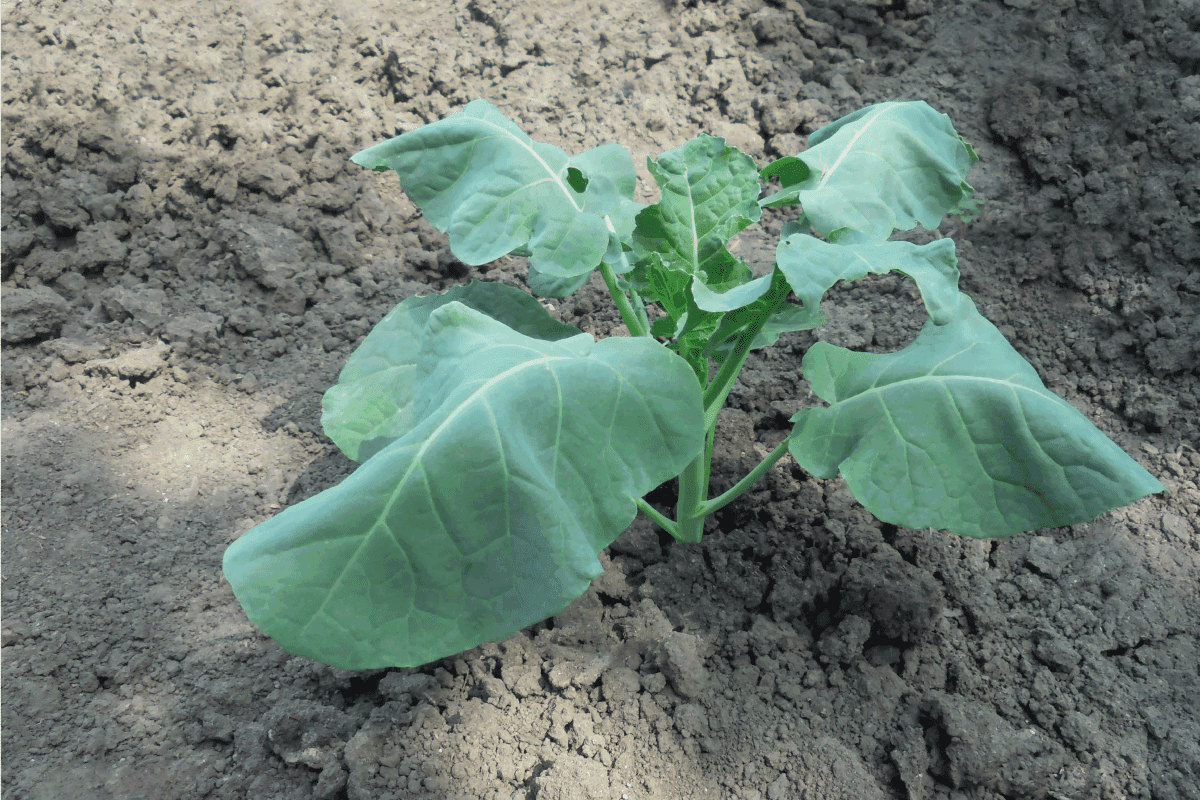 Insufficient water is the most common cause for wilted, droopy leaves in most plants. This is because when a plant doesn't get watered enough, it loses water faster than it's replaced. Since plants release about 95% of the water they intake back into the air, wilted leaves can occur quickly.

Luckily, there's a simple fix for this. Just water your brassica plants more frequently, starting with one long drink and then smaller watering sessions every few days. You might find that your plant does well on a more frequent watering schedule, or you might be able to return to watering just once or twice each week.

It might seem counterintuitive, but too much water can also cause wilted, drooping leaves. However, there's a simple explanation for this phenomenon.

When a root system becomes waterlogged, or full to capacity with water, it's harder for the plant to transport water and nutrients from the roots to the leaves. That means that even though the soil is full of water, most of it is getting stuck in the roots and only a little is actually making its way to the leaves.

Plus, an excessive amount of water can strain the roots and damage them. At best, this can slow the plant's growth and cause wilting, and at worst, it can kill the plant. Too much water in the soil also interferes with the intake of nutrients such as oxygen, and this can cause wilting, too.

To counter waterlogged soil, stop watering until the earth has a chance to dry. If you're experiencing heavy rains, try setting up a shelter over the affected brassicas to shield them from the elements. 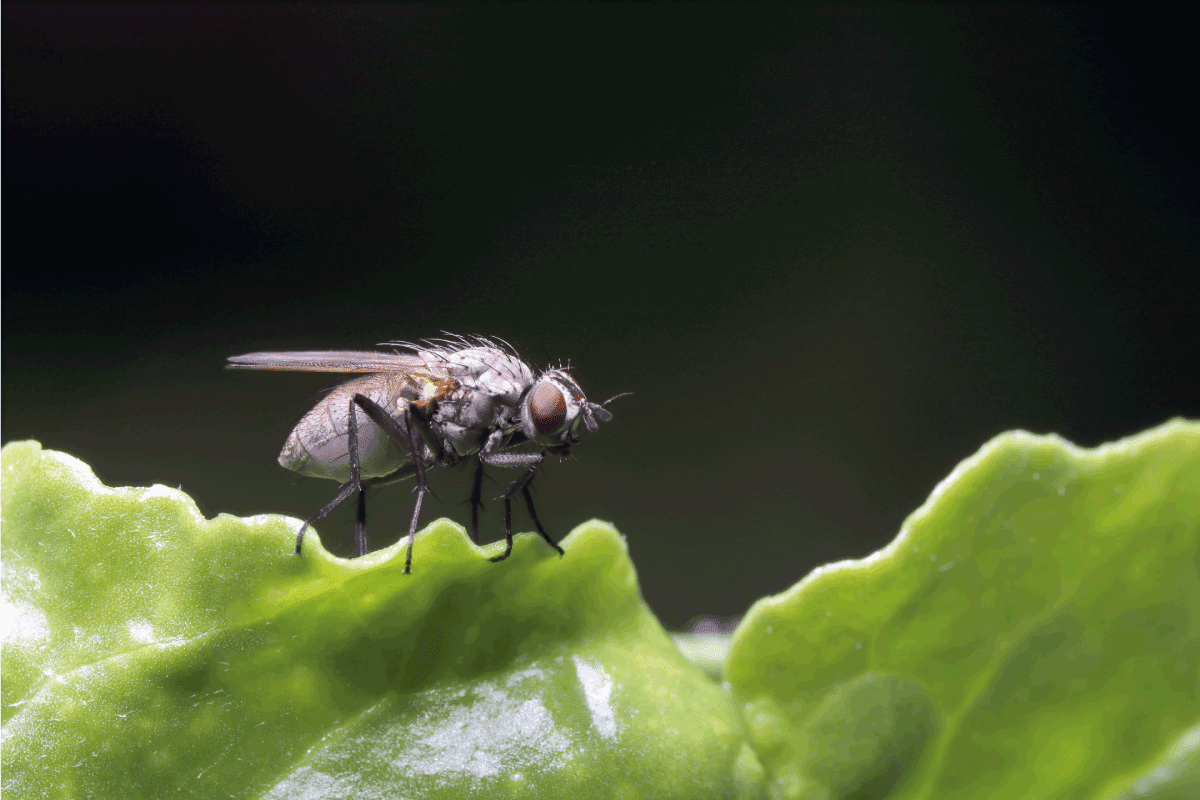 How To Get Rid Of Cabbage Root Maggots And Cabbage Flies

Cabbage root maggots can make their appearance as eggs, flies, or larvae. The larvae, which are commonly referred to as maggots, are tiny (no more than 1/3" long), white, and cluster together to feed on the root system of brassicas. They hatch from tiny eggs laid in rows in cool, moist soil.

After cabbage root maggots have fed on the brassica roots, they turn into pupae that stay dormant until they hatch into cabbage flies in the spring. When they've reached maturity, the flies feed on brassica plants for about 10 days. Then, they lay their eggs in the soil at the base of the plant.

A cabbage root maggot-infested brassica plant wilts and turns yellow. If left unchecked, these tiny pests will definitely kill your plants. Luckily, there are a few ways to get rid of them and even prevent infestations from happening in the first place.

First, if you notice tiny flies buzzing around your plants, check the soil for eggs. If you find any, destroy them. You can also trap the flies with sticky traps, or put rings of cardboard around the plant's stem to prevent the flies from laying eggs in the soil.

Introducing nematodes to your plant is a non-chemical way to kill the maggots. You can also dig the plants up, gently rinse their roots in cool water to wash away the maggots, and replant them.

If you need more advice on getting rid of pests, check out our article What Is Eating My Rhododendrons? 9 Pests To Consider.

Wilting or drooping leaves on your brassica plants are probably caused by one of the following problems:

These issues can be addressed by adjusting water intake, adjusting the nutrient levels in your soil, practicing crop rotation, and more. We hope this article gave you some insight into fixing your brassica plant's wilting or drooping leaves!