Figuring out what to use for your landscaping project can sometimes be frustrating. Are you torn between laying down mulch or bark in your garden and don't know which is better? Does mulch have benefits that bark doesn't, or is it the opposite?

Luckily, we've done plenty of research and have the answer for you.

Between mulch and bark, we recommend using mulch for areas prone to flooding and heavy rain, while bark works best for drier, more stable landscapes.

Generally, bark is better at absorbing water and lasts longer than mulch pieces. With that said, bark isn't usually great in gardens that are on a slope or get plenty of rain, so that's something to consider.

As we start this article, we will cover all things bark and mulch and discuss which is better for your yard project. Whether you need to keep your plants' soil moist, want to spruce up your landscape, or have other related questions, we're here to help. With that said, let's dive right into this topic! 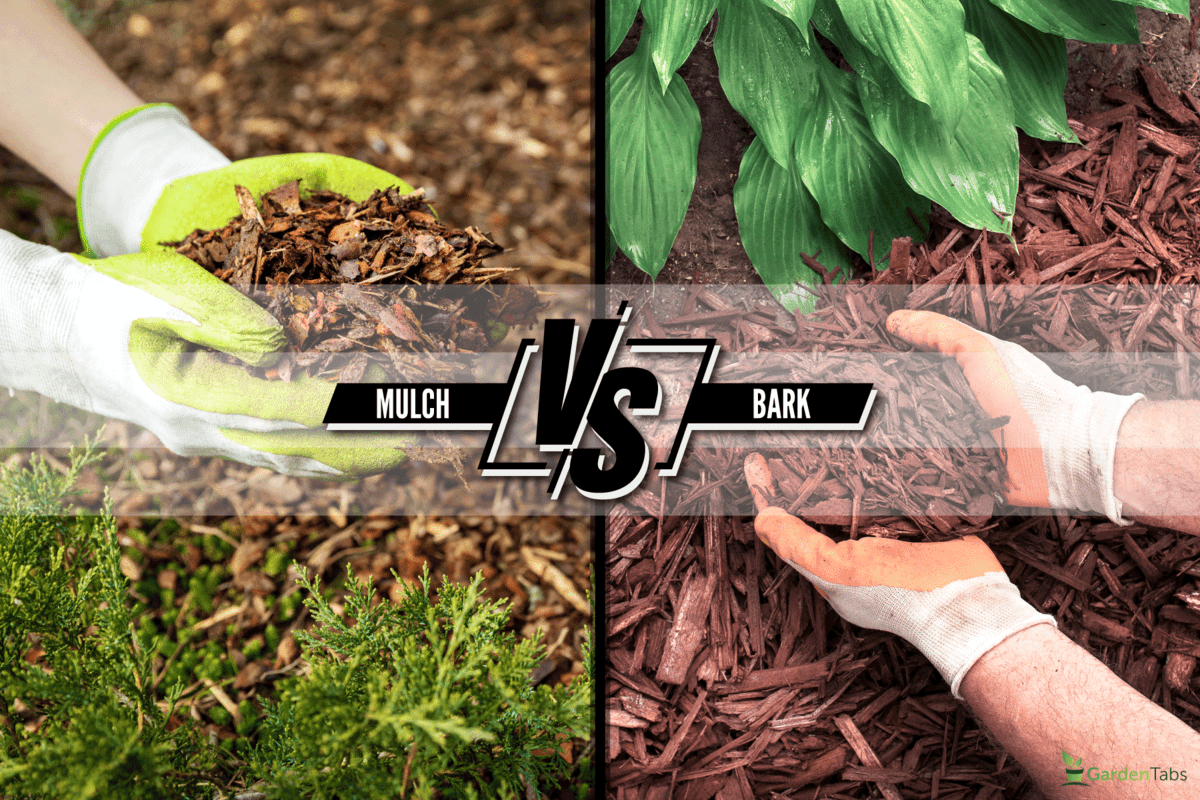 Which Is Better: Mulch Or Bark?

Although both materials are popular for the garden, bark seems to have more benefits. Between the two, mulch works best for yards prone to flooding, while bark holds out much longer in many landscapes.

So, that can hinder your decision, especially if you live in the tropics/a wetter region. This is because mulch retains water and clumps together during heavy rain while bark washes away.

The same can become an issue if your yard is at the bottom of a hill, so in that respect, mulching is better. However, bark pieces also retain moisture while blocking sunlight from reaching tiny weed sprouts, so they're perfect for keeping a garden clean.

On the other hand, mulch can't always prevent weeds from flourishing, so you win and lose some.

Furthermore, for durability, bark will last longer than mulch, which means less frequent refills and spending. So, if you want to save money and don't live in a flood-prone area, bark is the winner.

What's The Difference Between Bark And Mulch? 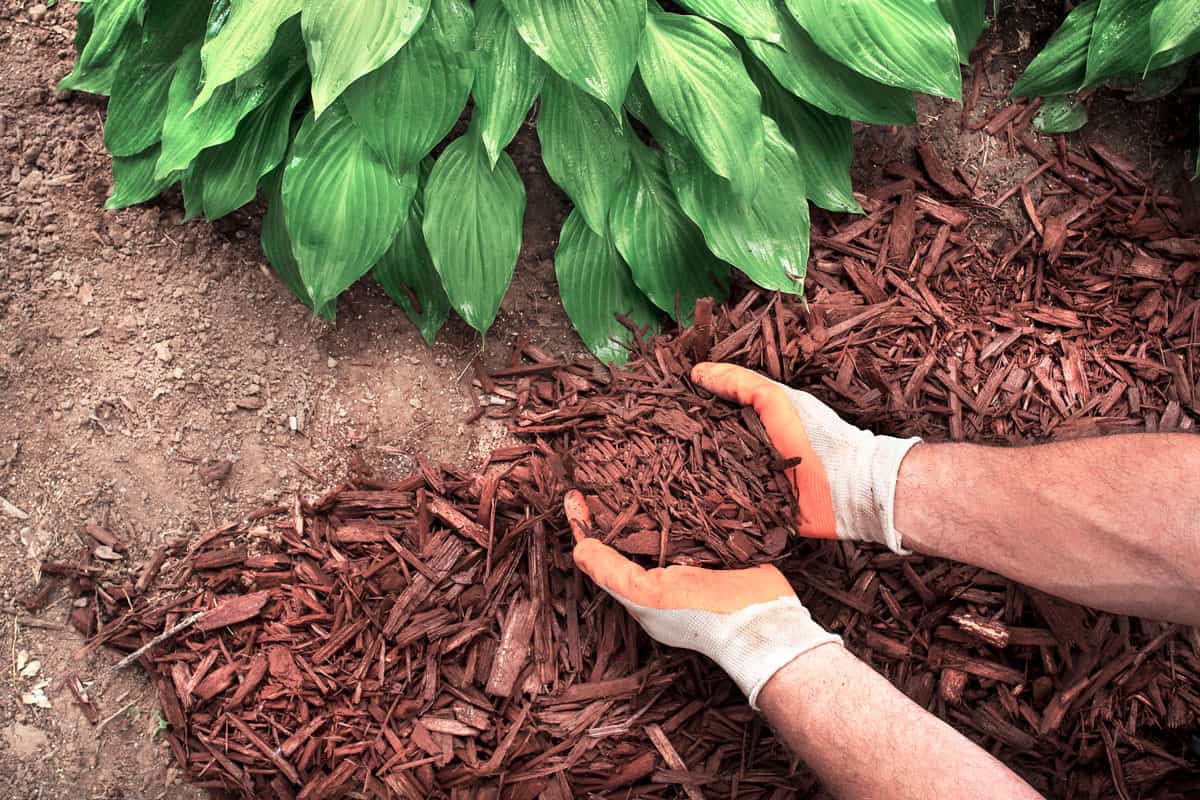 For those who still don't notice a difference between bark and mulch, they are two different types of wood material. Most notably, bark has more of a 'nugget' shape, while mulch is shredded wood.

Besides their shape difference, mulch is also a bit less manicured looking than bark, so it may not be ideal if you want to create an aesthetically pleasing landscape.

As we said, mulch tends to retain water and clump together better than bark can. Although this sounds perfect, mulch isn't quite large enough to block weeds from sprouting into your garden.

So, if you're worried about weeds, mulch isn't the better choice.

In contrast, if you don't have many weeds and don't want your bark to float away during a storm, that's when mulching will be better.

Which Lasts Longer: Mulch Or Bark? 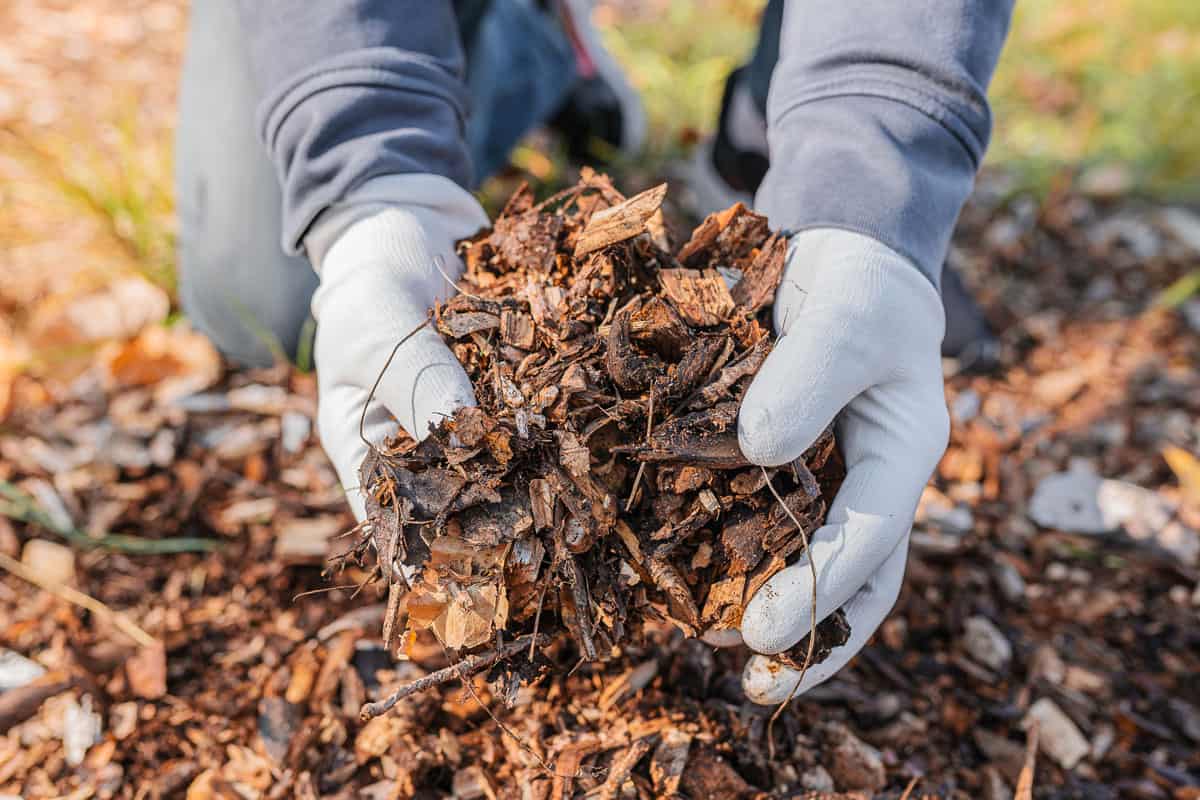 Now that you know the basics, it's time to see which of these landscaping materials lasts longer. Generally, you can expect bark to hold out between seven and ten years, while mulch will stay usable for around 5-7.

Again, that's not a significant difference, but if you want to use a longer-lasting wood in your yard, bark is the right option. However, if your garden floods often, bark won't outlast mulch.

Wind can also pick up mulch and bark and take it from your garden, so sometimes, mother nature controls the lifespan of a wood chip.

One thing to realize here is that bark uses the hardest part of the tree, while mulch/typical wood chips are made with scrap pieces. So, that is a big part of why bark is used for extended periods.

Regardless, bark will hold out and keep its shape/quality longer than mulch in most situations.

Can I Use Bark Instead Of Mulch?

Yes! You can certainly switch to bark instead of mulch in most cases. In general, if your bark is in a secure location, it will last for years without any problems.

As we mentioned above, bark is a harder wood than mulch, so it is perfect for blocking weeds, keeping plants moist, and withstanding wind.

However, due to the independence of a bark chunk, it doesn't always survive heavy rainfall.

Heavy water flow can lift and move bark nuggets far from their intended location, ultimately costing you money for a replacement. Again, this isn't always going to be dramatic, but if you're in the tropics or a wetland ecosystem, bark isn't the best idea.

Mulch is excellent for these situations, as it's thinner and can clump together. Many gardeners use mulch around plants that have trouble holding water, so it can also be better for desert environments.

What Type Of Wood Should I Use For Mulch? 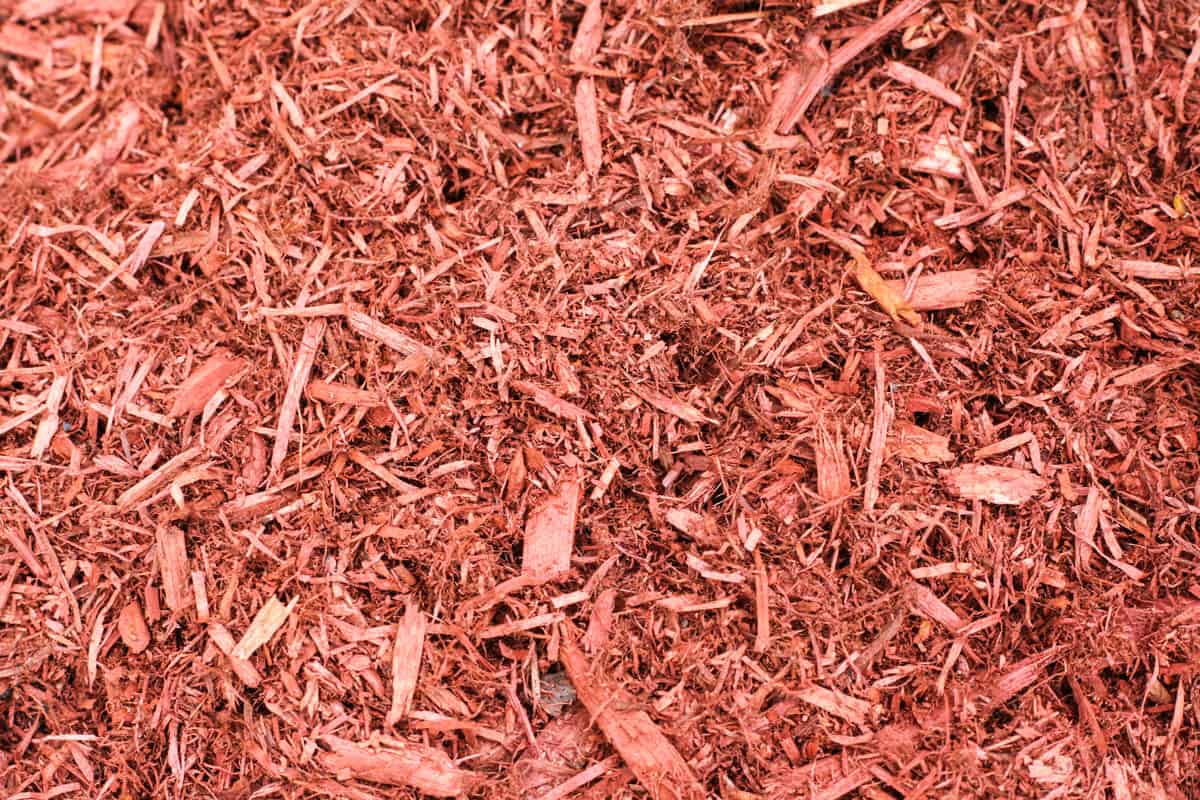 Hardwood bark mulch is generally one of the better choices for landscaping. According to LumberJax, it will consist of aged bark from hardwood trees, such as oak, hickory, ash, or maple.

This can be confusing for people who think mulch and bark are the same. Many brands use the terms interchangeably, which can be misleading.

A bark mulch is still mulching, just with harder wood and possibly heavier pieces. Unless you buy specifically 'bark' mix, you're likely purchasing mulch for your garden.

Furthermore, many pros recommend cedar mulch for any project, as it has natural oils that can keep insects away from your plants.

Cedar smell is a deterrent for cloth-eating moths, carpet beetles, cockroaches, and certain types of ants.

What Type Of Bark Is Best For Landscaping?

When it comes to bark wood, you want to use pine for landscaping. Experts recommend pine bark nuggets for potted and in-ground plants, as it works as a good 'base' for them.

Furthermore, bark is beneficial when growing trees or large shrubs, as it prevents weeds and has a bit of weight to it. As we said, mulch can also work nicely for trees but doesn't prevent weeds from sprouting and won't last as long.

So, pine bark is an excellent choice whether your plants are in pots or on the ground. One of the reasons for this is that pine is a softwood.

Pine also doesn't matt down as much as cedar bark, so that can be helpful for aesthetics and soil oxygen.

Sometimes, super-heavy or matt-prone woods can cause waterlogging in soil and negatively affect plant growth throughout a garden.

How Much Does Mulch Cost?

On average, you can expect mulching to cost anywhere from $15 to $65 per yard. Again, the final price of your mulch depends on whether it's premium-grade, delivered in bulk, or just for a small plot of land.

Generally, mulch can get expensive for larger projects, as you'll need someone to bring it to your home. According to Home Guide, if you want home delivery for your mulch pieces, expect to spend $18 per yard.

In addition, colored and hardwood mulch runs around $30 to $40 per yard, which can quickly become expensive for larger properties. Again, these are estimates, so it's possible to get your project done for less if you get creative.

One easy way to save money on mulching is bringing it home yourself. For example, if you have a truck or SUV, you might save some money on labor by transporting it on your own.

This mulch is red, all-natural, works perfectly for ground covering, keeps moisture around the base of your plants, and comes in a 42-quart bag.

How Much Does Bark Cost? 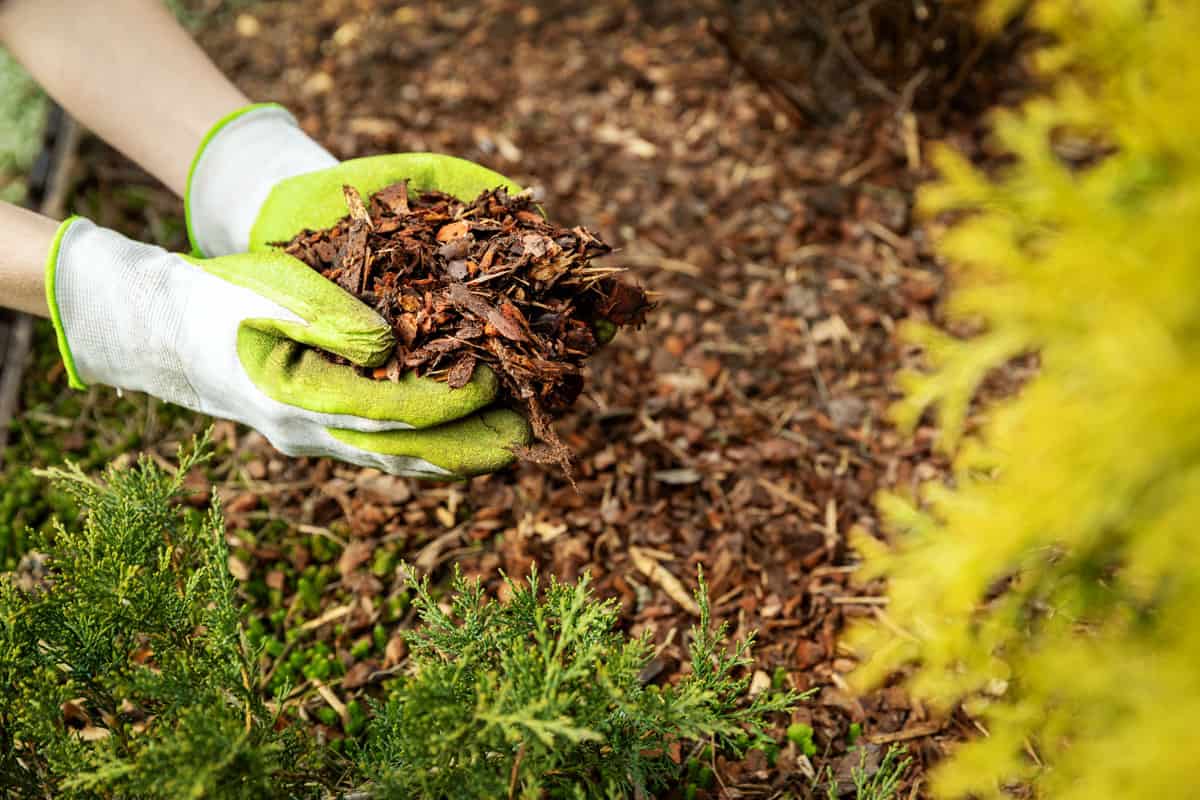 For those wanting to use thicker bark in their garden, this will set you back between $17 to $68 per cubic yard. So, when we compare this price point to typical mulching, it's about the same.

Again, bark is more durable than mulch, so a few extra dollars per yard isn't so bad. An interesting thing with bark is that if it's shredded, you might pay less than you would for standard mulching.

According to Better Homes & Gardens, shredded bark can be a good transition between mulch and thicker bark chunks and won't decompose quickly.

Like mulch, you also want to factor in the transport and labor. If you have a store deliver your bark, expect to spend much more than if you do it yourself.

However, this isn't always doable if you don't have a truck or large SUV; in that case, you'll need to hire someone to move it for you.

If you want something to last a while, we recommend rubber bark for your garden, as it keeps its shape and color for decades.

This rubber mulch is perfect for landscaping, won't decompose, is IPEMA Certified, made from recycled tires, should keep its color for 12 years, comes in various sizes/hues, and comes from a small business. 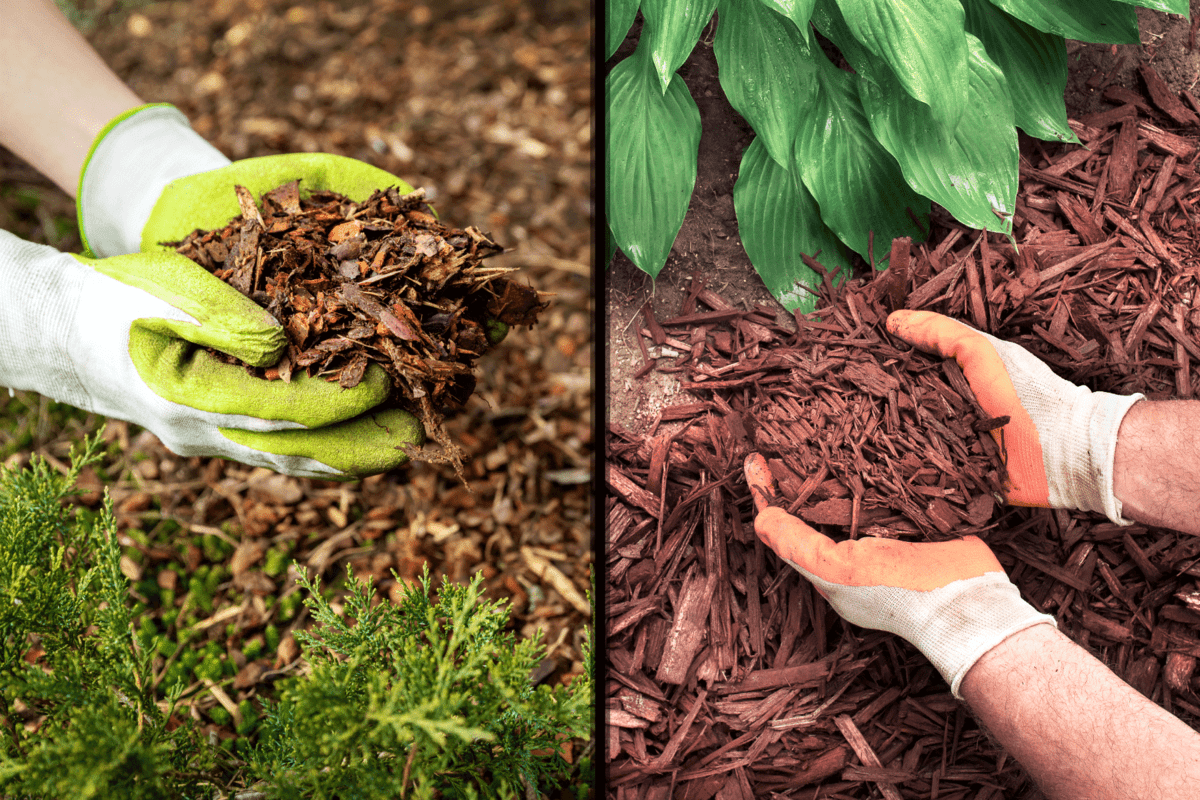 If you want to spruce up your garden, you have likely thought to use mulch or bark. Whether you need to create a more aesthetically pleasing landscape or have plants that won't hold moisture, both these options can be beneficial.

We found that mulch works better for flood-prone landscapes, while bark is best for less wet climates. That's because mulch can clump together when soaked, keeping it in place. The bark will float away with too much rainfall.

However, mulch does not last as long as bark and isn't as durable. So long term, we recommend bark over mulching. Either way, try to find a product that is heavy enough to withstand the elements but not so heavy it restricts your plants.

Made it to the end? Check out these helpful related articles below!

Is Mulch Bad For Dogs To Eat And Walk On? - Here's What You Need To Know!