Both marsh marigolds and lesser celandines belong to the buttercup family. However, the two plants have some significant differences. We researched high and low and discovered curious differences between these family plants.

Marsh marigolds have five to nine yellow sepals but no petals and fleshy roots (which don't grow tubers). Conversely, lesser celandines have seven to twelve thin yellow petals with green sepals under them.

Continue reading to discover the differences between these two plants that even the most expert eye might miss! 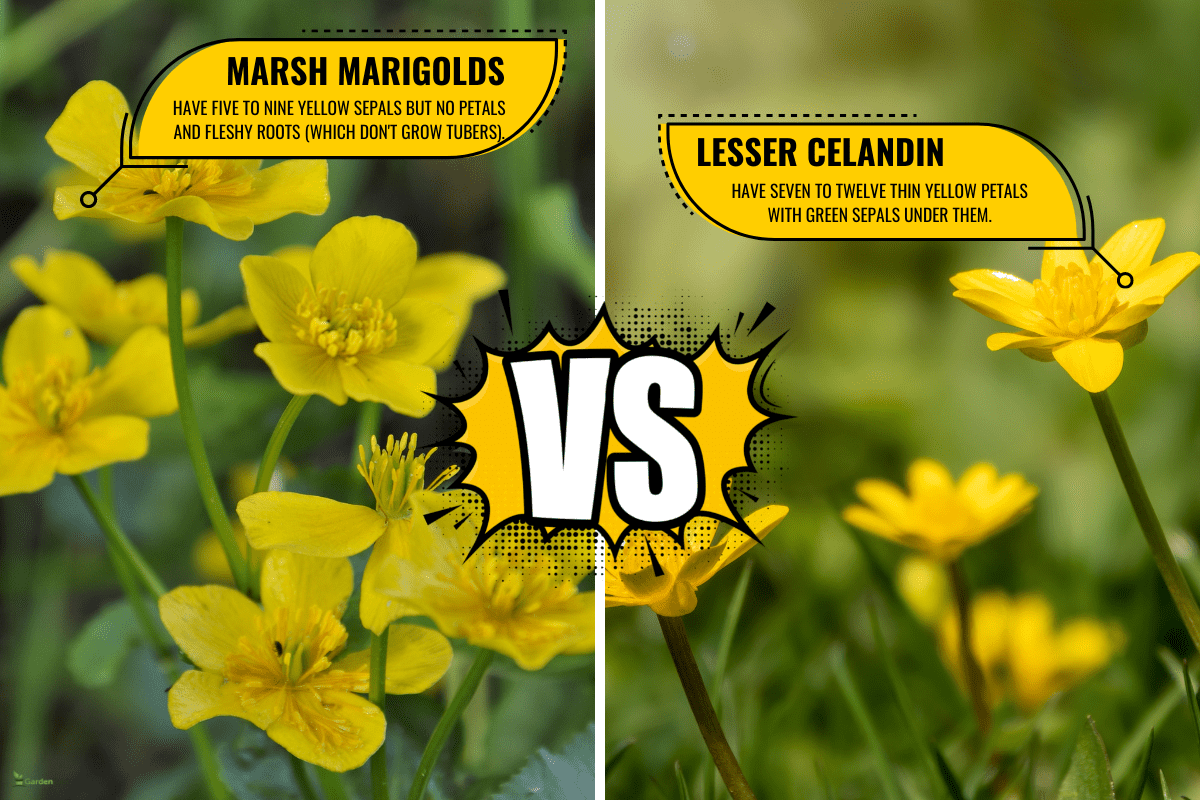 Both lesser celandine and marsh marigold look similar if not looked at closely. Some of the main differences that can help you distinguish between the two are as follows: 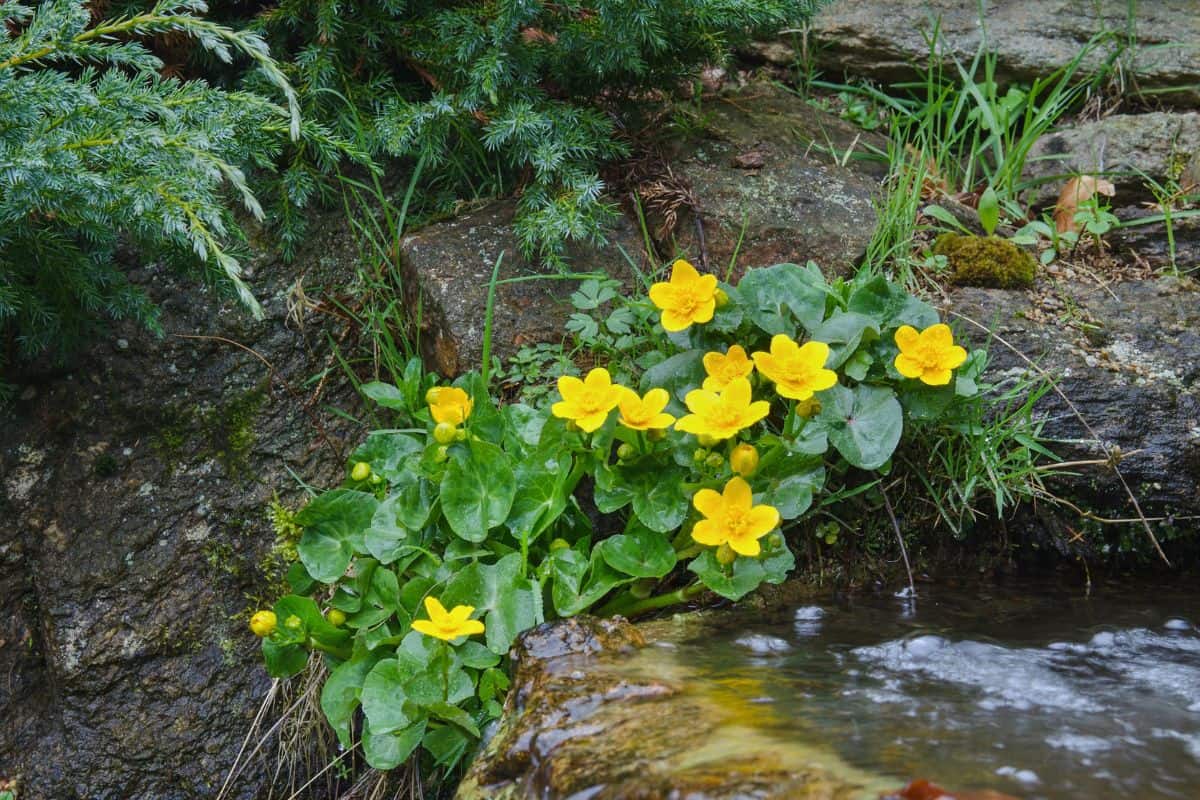 Lesser celandine is highly adaptive and can be found in a partially shaded area far away from bodies of water. It can still grow under direct sunlight if the soil is moist enough. On the other hand, you find marsh marigolds close to bodies of water.

Lesser celandine blooms in March or the beginning of April. Marsh marigold blooms a month later, towards the end of April to June. 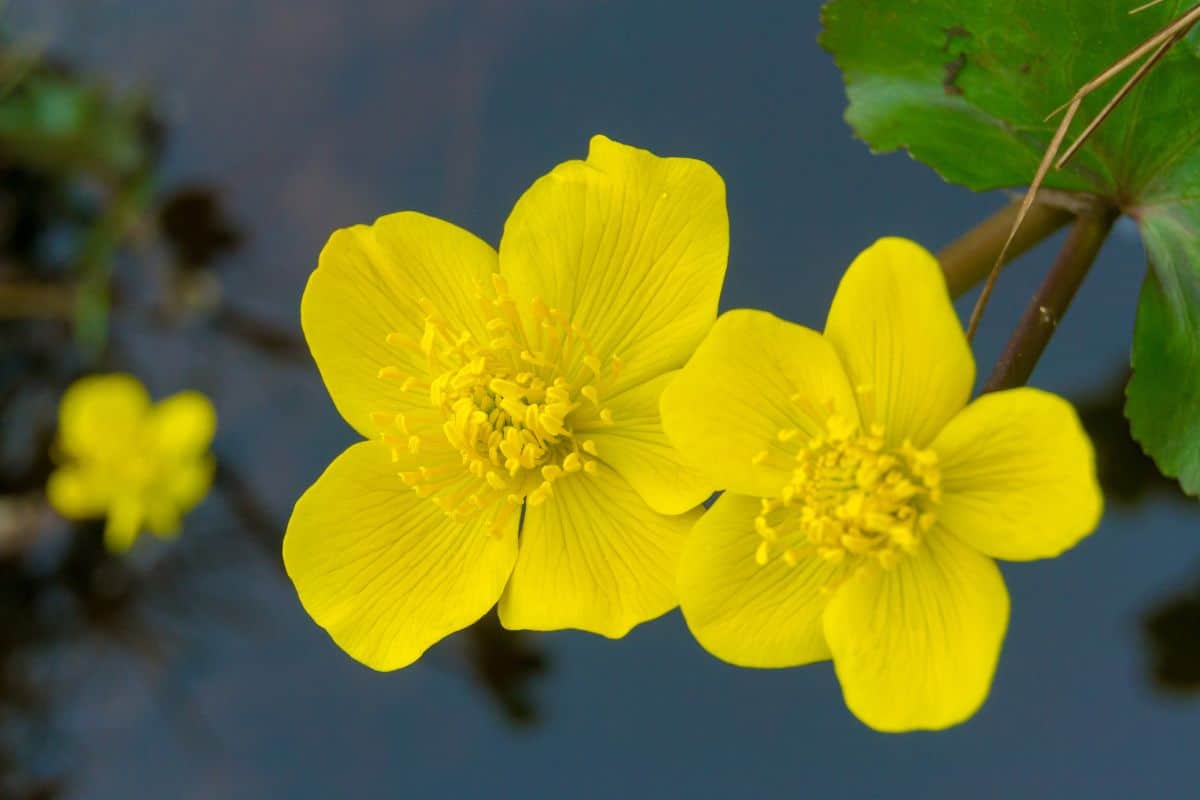 When not in bloom, distinguish the two by looking for bulblets, only found in lesser celandine, which also spread into a dense mat, unlike marsh marigold. Lesser celandine has underground tubers that make it aggressive and above-ground bulbils, something you won't find in marsh marigolds.

Lesser celandine spreads across the ground to form a thick carpet. Its dense root system makes it grow in mat-like unbreachable canopies. However, you cannot find these qualities in marsh marigolds.

Marsh marigold, also known as Caltha palustris, grows in clumping colonies. It's not invasive in the US. However, it can take over the land gradually over several years, making it simple to reduce if needed.

Although colonies are not hard to dig up, if they extend too far for your liking, you can put them in pots or aquatic baskets to inhibit their spread.

The precise location determines whether Caltha palustris is invasive. There aren't many biological controls in natural places to limit that. Therefore it can spread quickly in ponds. If marsh marigold is not native to your local region, avoid planting it. It's always advisable to use only local flora.

Click here to see this heavy-duty garden tiller on Amazon.

Do You Need To Control Lesser Celandine?

Lesser celandine infiltrates moist woodlands in the early spring, forming a thick monoculture. Even though the foliage dies by June, the plant retains a dense network of underground tubers and roots. So, the desired flower growth is hindered.

Controlling lesser celandine by any means will require patience and close monitoring if they infest your garden. To eradicate the lesser celandine, use the following methods.

Gardeners can use hand digging to control small infestations of lesser celandine. It is critical to eliminate all the parts of the plant. The weeded parts should be bagged and discarded as garbage.

Certain herbicides can control this plant, especially ones with the active ingredient glyphosate. Remember to read and follow the label instructions when using them.

However, the application timing and herbicide concentration must be correct to achieve complete control. The ideal application time is when the leaves are visible before the plant fully flowers. Outdoor temperatures should be above 40° Fahrenheit, which is in late winter or early spring.

Use a one or one-and-a-half percent rate of glyphosate with a 53.8% active ingredient. A non-ionic surfactant added will improve herbicide uptake by the plant. Glyphosate affects other foliage, limiting your application to the lesser celandine.

It could take one or two weeks for the total outcomes of the treatment to become apparent. Repeat the treatment over the years for complete elimination of the plant.

Check out this effective weed killer on Amazon.

Flame weeding is an alternative method to achieve the top "burn" using a propane-powered torch. It leaves no residues in the soil, but roots or bulbils could be affected.

To accomplish this, you should layer two to three inches of mulch on the lesser celandine.

For more on herbicides, read this post: How Far Does Round Up Spread [Can It Kill Nearby Plants?]

What Are Marsh Marigolds Good For?

Most of its parts are used for medicinal purposes. Use cautioun because every part of this plant can irritate. The deadly glycoside protoanemonin present in the entire plant is mainly concentrated in the older sections. Only heat can eliminate it.

They are expectorant, diaphoretic, emetic, and anti-rheumatic. You can treat colds and sores with a concoction from cooked and crushed roots.

They can make a laxative and diuretic tea to help constipation. If you cook the leaves well, you can eat them like spinach.

Some people take the flowering part to relieve menstrual pain, liver problems, jaundice, and bronchitis, to name a few. Despite safety warnings and a lack of scientific evidence to back up these uses, many enthusiasts swear by them.

Please note that you should never eat any part of this plant raw because it could lead to high intoxication.

To continue your quest on marigolds, here's a post: Which Marigolds Are Not Edible/ Toxic [Comprehensive Guide] 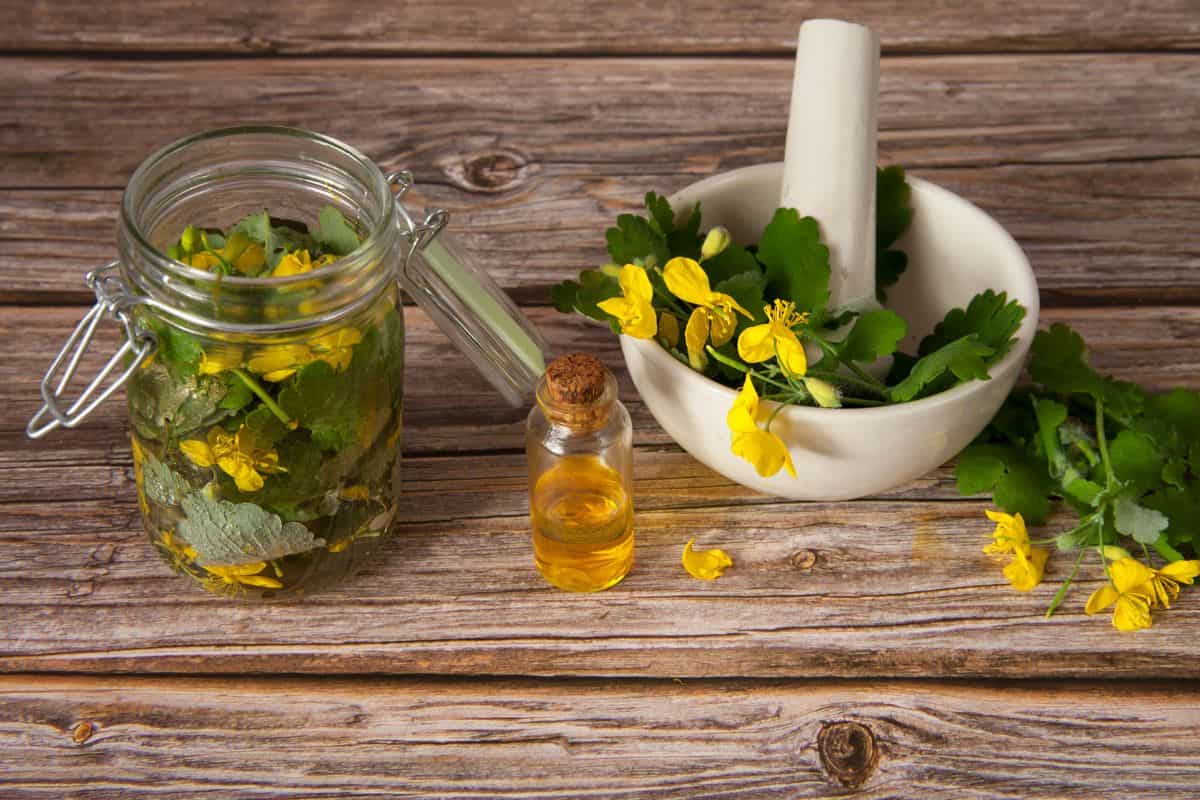 Lesser celandine might have antioxidants that make it suitable as a spring tonic, but more studies on its biological effects are required. The roots and the leaves are the parts to be consumed but only when well cooked.

The plant's roots, bulbs, or tubers, which can be consumed as a starchy vegetable, are reportedly delicious.

Lesser celandine should not be consumed after it has flowered. It has a higher protoanemonin concentration that might irritate the tongue and gastrointestinal tract. The entire plant becomes increasingly bitter and unpleasant to eat too.

The symbolism of these flowers depends on your location. Some myths and legends attached to the marsh marigold and the lesser celandine go as far back as ancient Greek and Roman times. 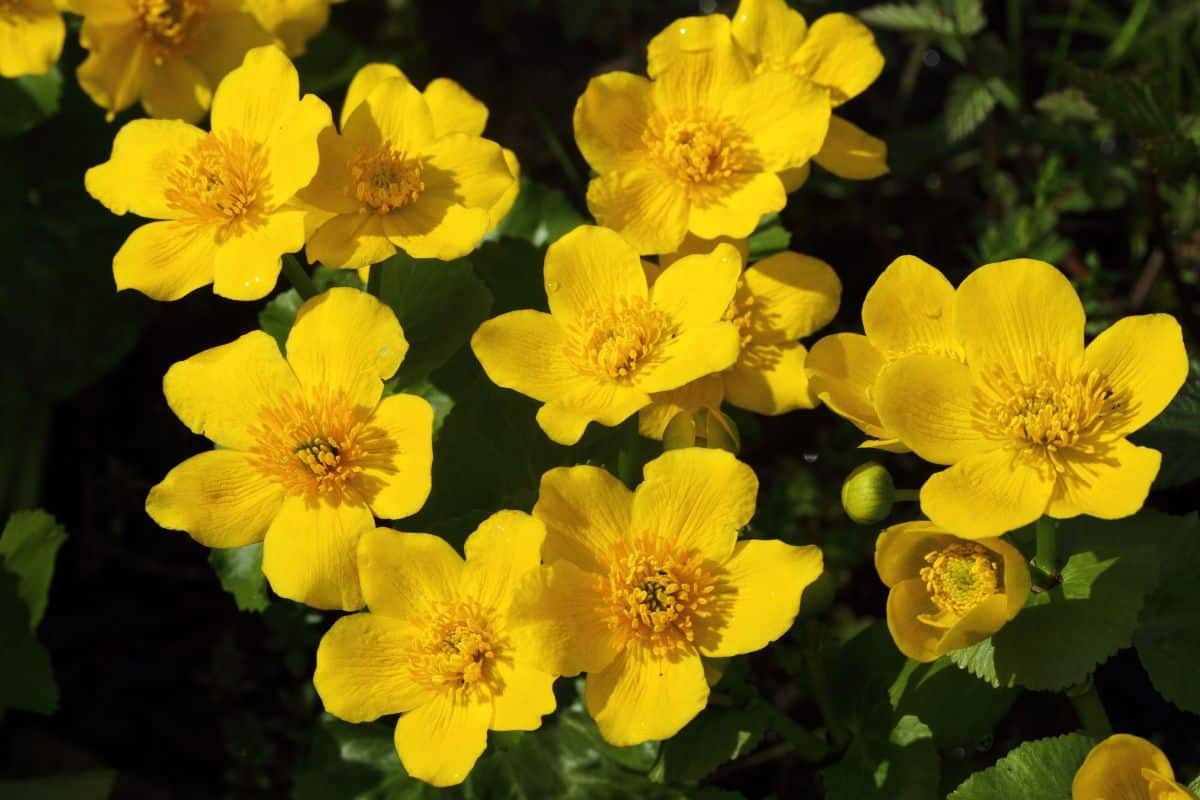 These flowers are believed to have first grown where the devoted woman stood. However, their symbolism is only partially based on this legend. The most popular symbolisms are:

Scientists and nature lovers believe these symbolisms are attributed to marsh marigolds because they are among the first wildflowers to bloom after winter. 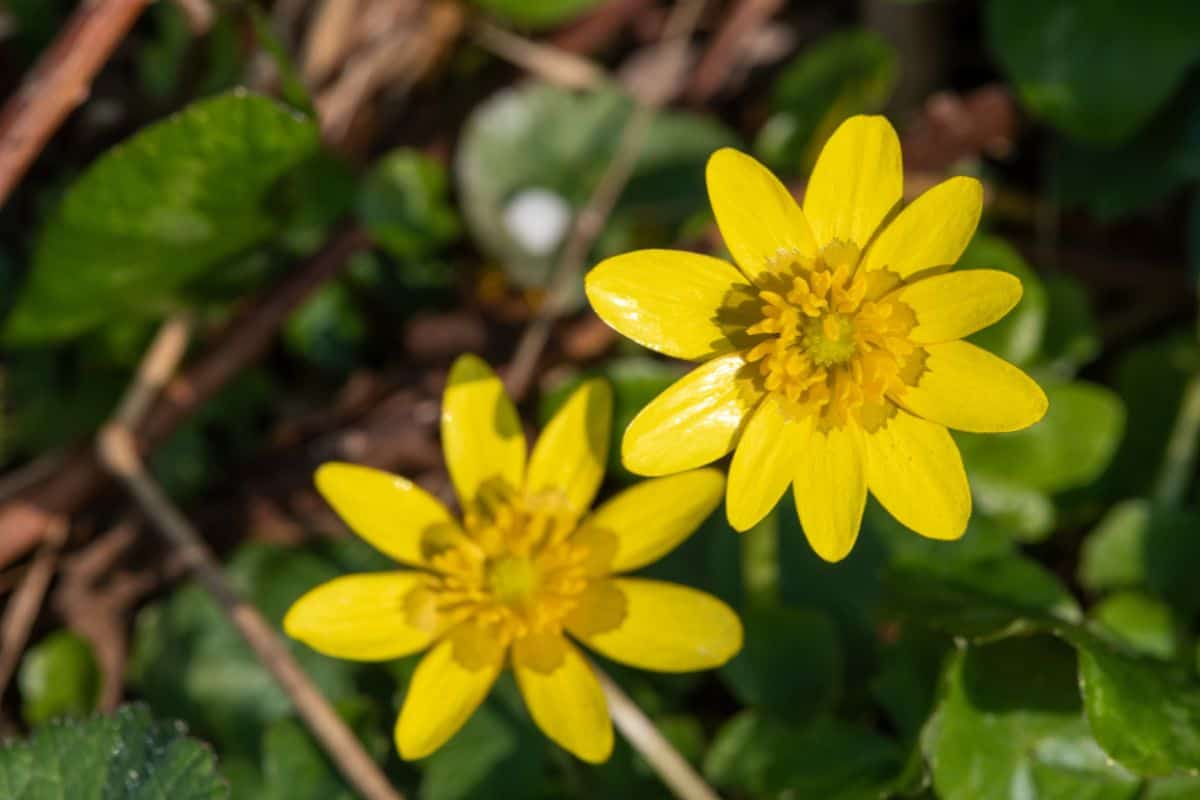 This ancient flower cannot be left out when we talk about symbolism. Also known as the pretty flower with an ugly nature, it seems to hide this fact when used in symbolism:

Are Marsh Marigolds Similar To Dandelions?

Sometimes spring might come late. In contrast to the common perception, dandelions are not among the first spring blooms. Hardy spring greens like marsh marigolds produce tender edible green leaves months before the first dandelion.

Like the marsh marigold, which has medicinal value, dandelion's roots can be roasted, crushed, and used as a coffee replacement. Some even consume the leaves in salads. It's believed to have diuretic properties.

Some people brew dandelion roots into a concoction for gut and liver issues and infuse blossoms into tea for colds. After the winter, leaves can be brewed into a concoction to help the body recover and cleanse the blood.

At first glance, lesser celandines are easily confused with the closely related marsh marigold. Both have heart-shaped dark green leaves and yellow flowers and belong to the same buttercup family.

Closer inspection reveals that lesser celandines as smaller, daintier plants with far more pointed petals and a preference for drier ground. They also tend to be invasive, unlike the marsh marigold. It's easy to decide which of the two can go well with the rest of your foliage.