Walking out into your garden and realizing your favorite plant is dying can be devastating. Do you have a sickly loropetalum (Chinese fringe bush) that needs some help, but you have no idea what to do? What causes a loropetalum to die?

Luckily, we've done extensive research into this plant and have the answers for you!

For anyone with a dying loropetalum, there are a few common causes for this. A lack of sunlight will cause loropetalum to become sick and even die.

Furthermore, too much heat can also cause a Chinese fringe bush to die, so you'll need to find a happy medium sun/temperature-wise. Loropetalum also tends to become more susceptible to illness and death as they age, so that's something to think about.

As we begin, we will cover all things loropetalum and discuss why yours might be dying. Whether you're new to this plant or have one that isn't doing well, we're here to assist. With that said, let's dive head first into this topic below! 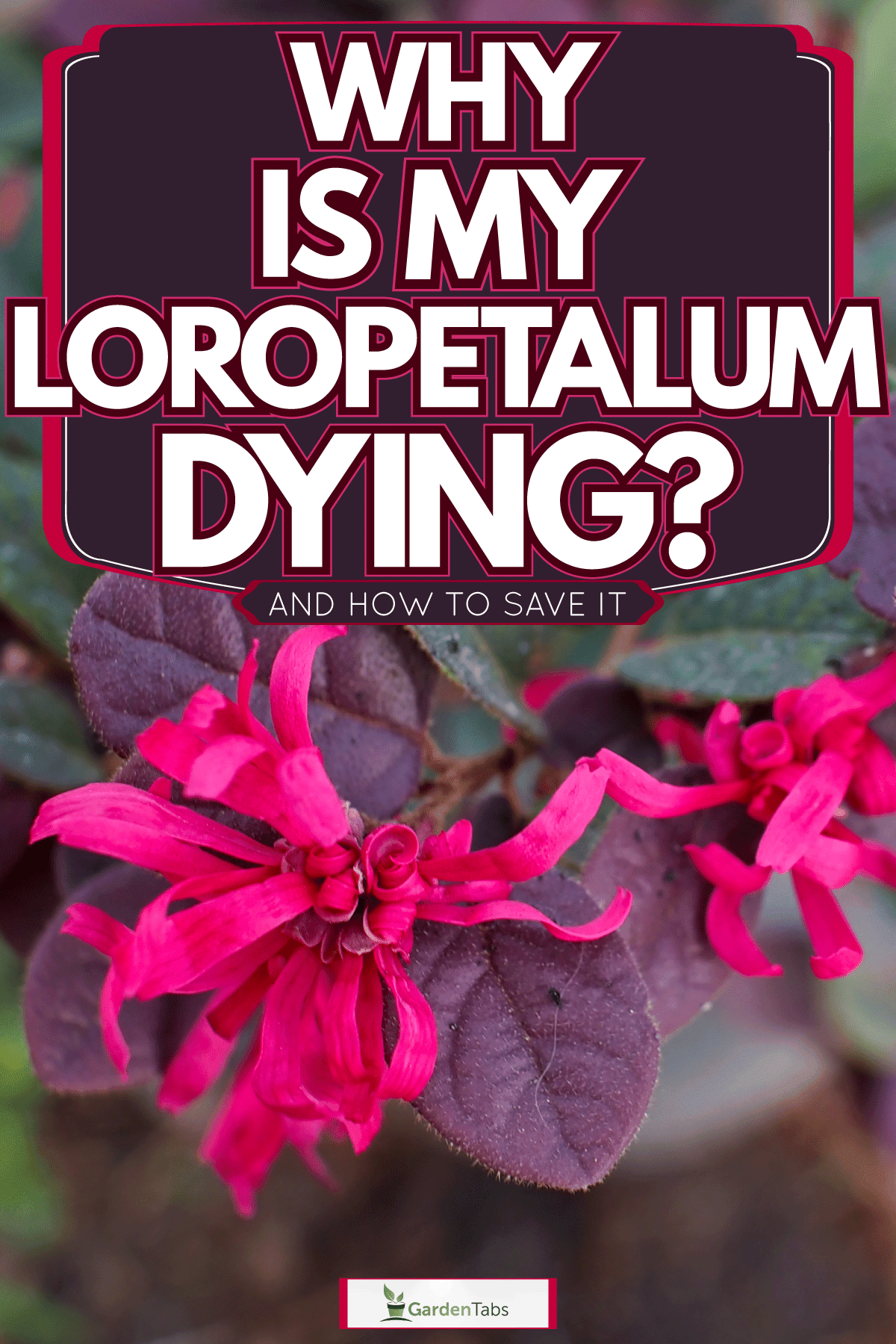 What Causes Loropetalum To Die?

One of the leading causes of loropetalum death is a lack of proper sunlight. Ideally, your plant should receive between four and six hours of sun throughout the day.

This can happen in various cycles, whether early morning sun or exposure towards the later afternoon. That said, you don't want to plant a Chinese fringe bush somewhere with too much sun/heat.

As we covered, too much heat can also exhaust loropetalum, ultimately causing it to die. Typically, these bushes grow best in partial to dappled shade, depending on where you live.

Considering that summer can become a deadly season for this plant species, you need to consider where your Chinese fringe bush is, how often you water it, and how old it is. 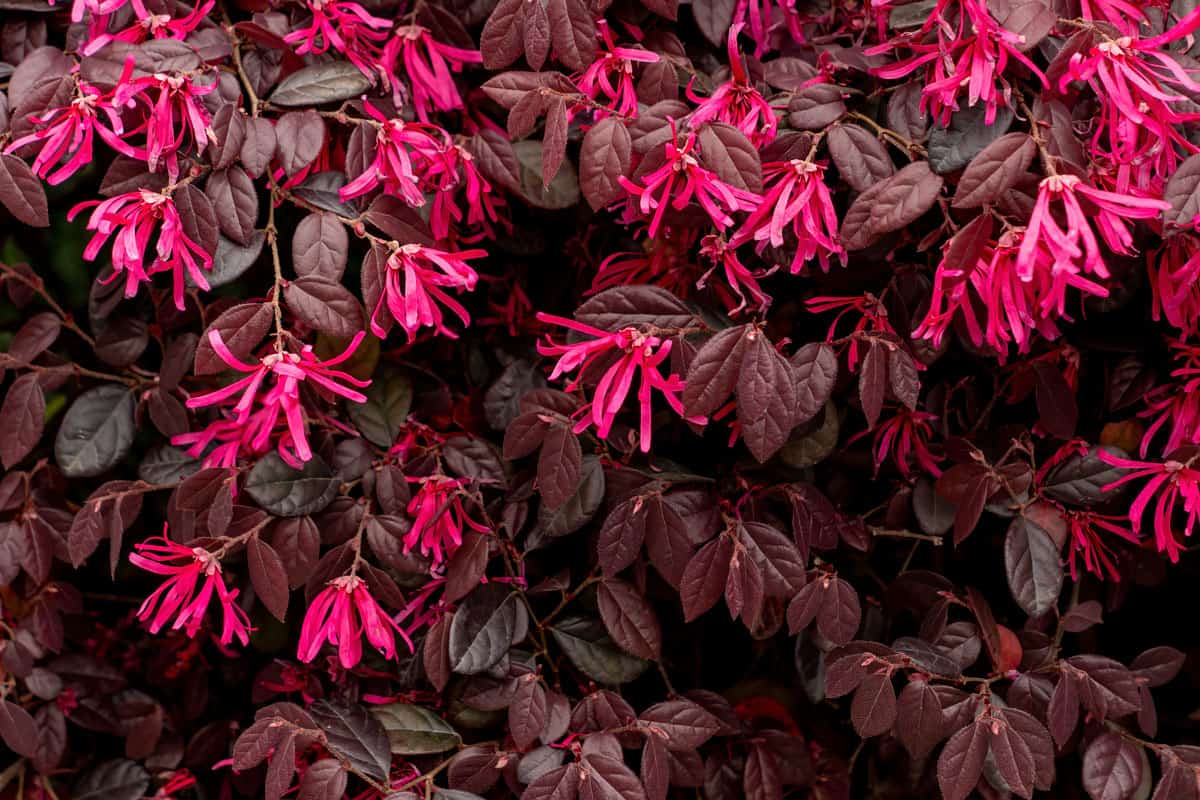 Can You Save A Dying Chinese Fringe Bush?

If you work quickly, you should be able to revive a dying loropetalum (Chinese fringe bush). Heat or a lack of sun will be the main culprits for death, so keeping an eye on your plant's conditions is essential.

Additionally, if the summer where you live is unusually warm, you might want to move your loropetalum entirely. When it comes to a lack of sun exposure, you'll have to do the same thing.

Let's say your Chinese fringe bush is tucked under a tree or larger shrub. If your plant becomes visibly sick, you must either prune the overhead plant's foliage or transplant your loropetalum.

Generally, removing a Chinese fringe bush from the ground will be easier if it's young, so think of this as a last resort. Moreover, you can also try giving your plant extra water on hotter, drier days if the heat is the issue.

The key here is stabilizing your loropetalum's growing conditions. Applying a fresh layer of soil around your bush could even be beneficial when you transplant it or if sun/heat doesn't seem to be causing the deaths.

Sometimes, loropetalum can die if their soil doesn't have enough nutrients, although this isn't as common. Again, your plant could just be old and ready to go, so this can be tricky. 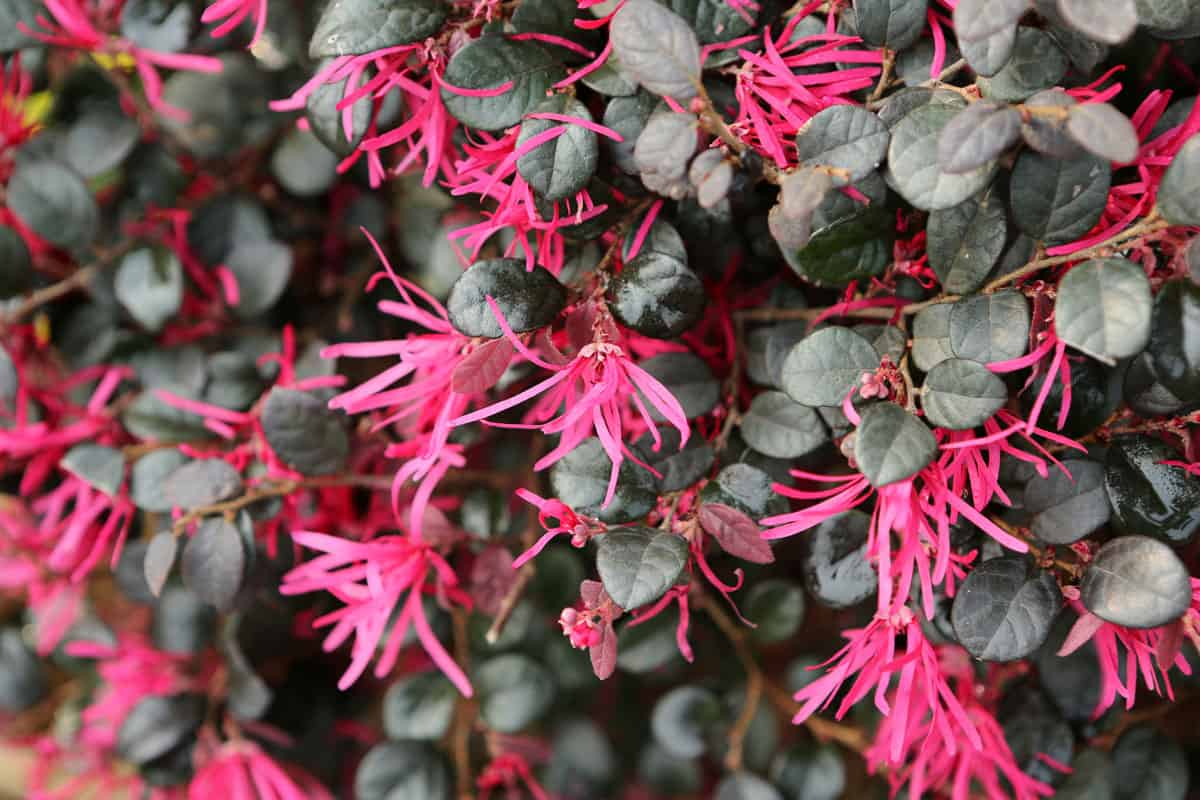 Depending on which variety of loropetalum you have, the dying symptoms could be slightly different. For example, if you have a purple flowering plant, its foliage will begin to lose vibrance, eventually falling off.

If you have a red variety, you will notice something similar, or even browning of leaves. This will also come down to what is causing your Chinese fringe bush to be sick.

You can expect more foliage loss/stunted growth if it's a lack of sunshine. On the other hand, if it's due to extreme sun and heat, your plant will have a more "burned" appearance.

According to WanderLuce, the oldest leaves and sections of your plant may become brittle and die off, so this can be a long period of symptoms.

Like many shrubs which are sick, loropetalum won't just die overnight. You should notice your plant either lose leaves, change color, become laggy, or stop growing altogether.

Why Is My Loropetalum Drooping? 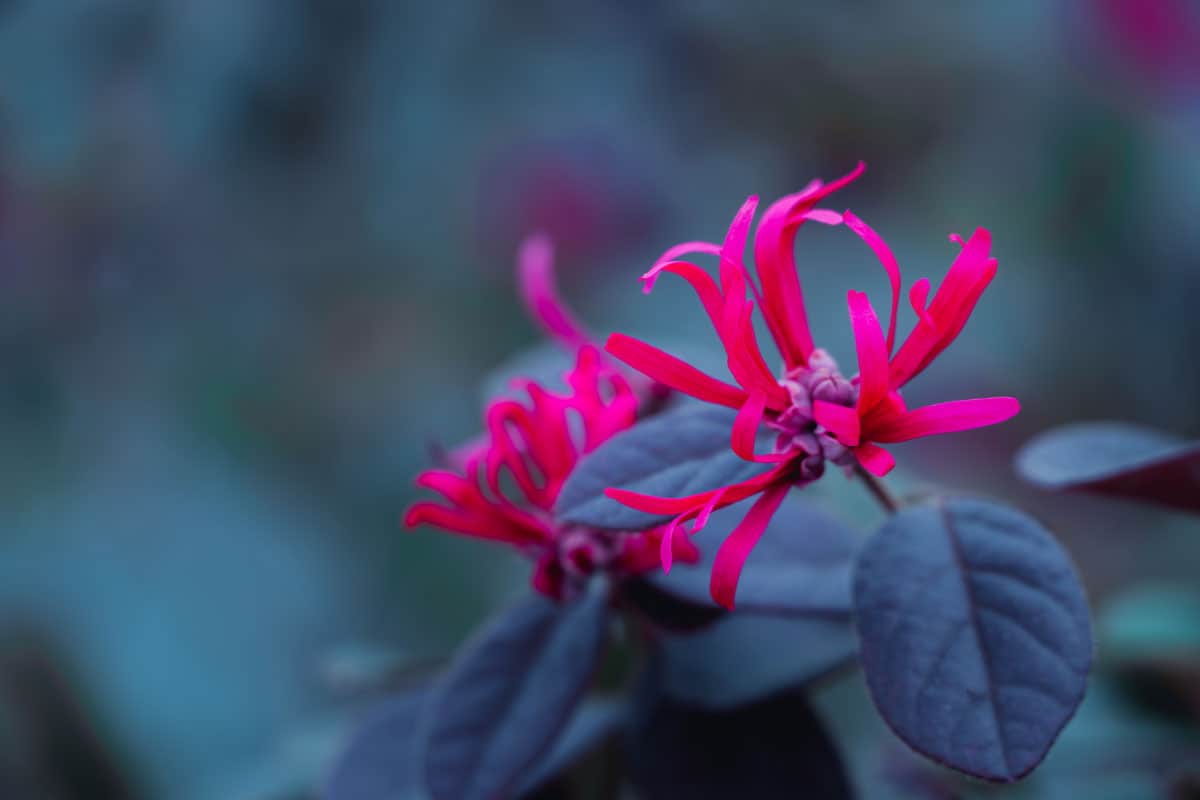 For anyone with a droopy loropetalum plant, this is most likely due to a lack of water. Especially if it's summertime, your fringe bush will require more hydration.

Your shrub will begin to droop because it lacks the energy to stand tall and perky. Additionally, your loropetalum could be drooping to conserve energy during the peak heat periods throughout the day.

Plant Addicts states how a loropetalum's leaves will even begin to wilt towards the ends if the lack of water is severe, so keep an eye out for that.

However, you also don't want to get too crazy with the watering schedule, as too much moisture can cause the roots of your Chinese fringe bush to rot or drown.

We recommend giving your plant around an inch or so of water every week during summer and then every other week during cooler times.

In general, loropetalum will be somewhat drought-tolerant. That said, this mainly applies to mature, established plants with deeper root systems.

One of the more interesting facts about loropetalum is that it's easier to kill one with too much water than too little. If the weather isn't extreme, your shrub can go weeks with little hydration and still be okay.

Furthermore, if a Chinese fringe bush gets plenty of shade in the hotter afternoon hours, it may only require supplemental irrigation to survive.

Again, this is not the same for everyone, as USDA growing zones have dramatically different conditions. You won't be able to leave a loropetalum to nature in Arizona or Nevada like in Washington or Oregon.

Regardless, it's crucial to keep your loropetalum adequately hydrated year-round, whatever that means for your situation.

Can Overwatering Loropetalum Kill It? 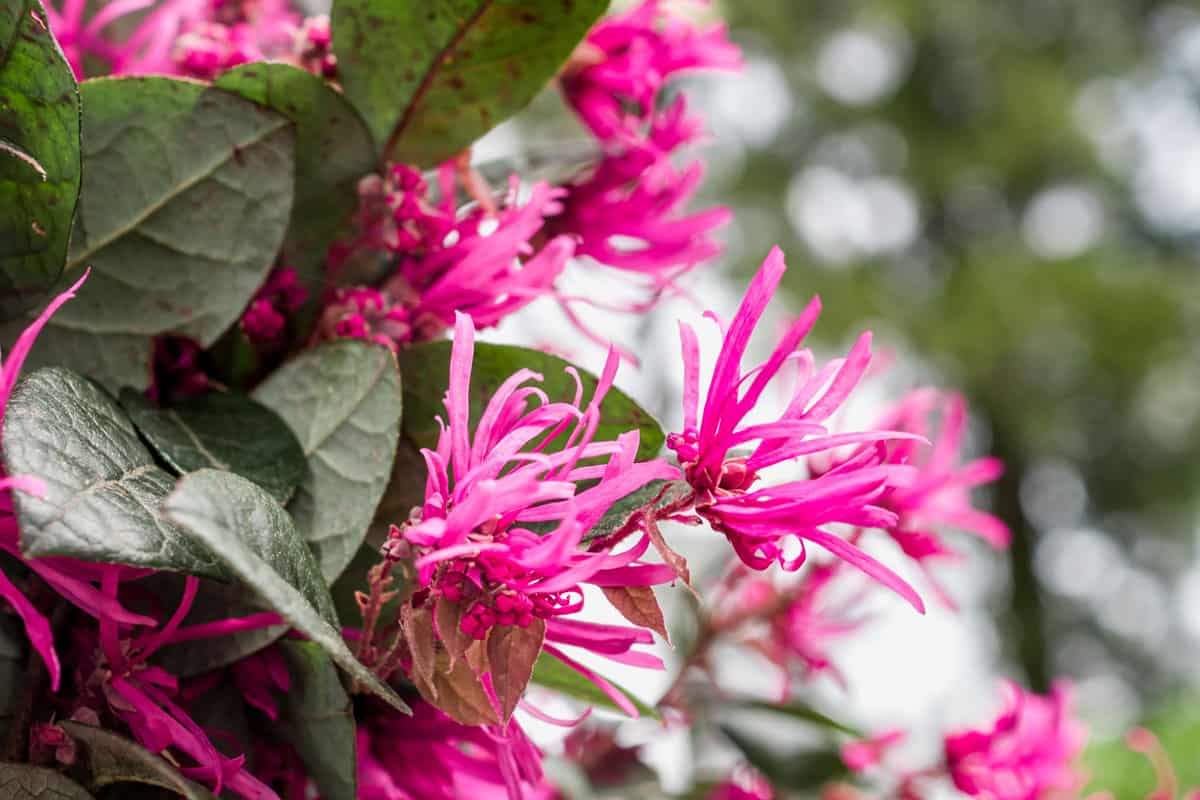 Yes, you can kill a loropetalum if you give it too much water. As we mentioned above, this species doesn't like too much moisture in its roots, so don't get crazy with your watering schedule.

Ideally, you will water a Chinese fringe bush 1-2 times weekly, depending on the weather. Root rot is a serious threat to many plants in a garden, and loropetalum is no different.

Considering that these shrubs require well-draining, nutrient-rich soil, you want to avoid compacted options. For example, a loropetalum growing in clay ground will have a higher chance of dying due to root rot.

For that reason, we recommend using a somewhat sandy loam mixture in your garden to prevent water pooling around the base of your bush.

The amount of shade your loropetalum gets will also affect how much water it needs. Suppose your bush gets between two and four hours of full sun each day.

You won't need to give it nearly as much water as one growing in 4-6 hours of direct sunlight. When you overwater a plant in shadier conditions, this opens the door to diseases, which nobody wants to deal with.

No. Your loropetalum isn't going to respond well to wet or soggy soil. As we said, this species cannot handle wet feet, meaning their roots need to stay on the drier side.

That especially goes for Chinese fringe bushes in shadier spots. The last thing you want to do is make a sick plant even sicker by overwatering it.

Even if your plant needs water after a dry spell, that doesn't mean you need to drench it. Remember, this species prefers moderation in all aspects of its life, so less is more.

How Long Does Loropetalum Live? 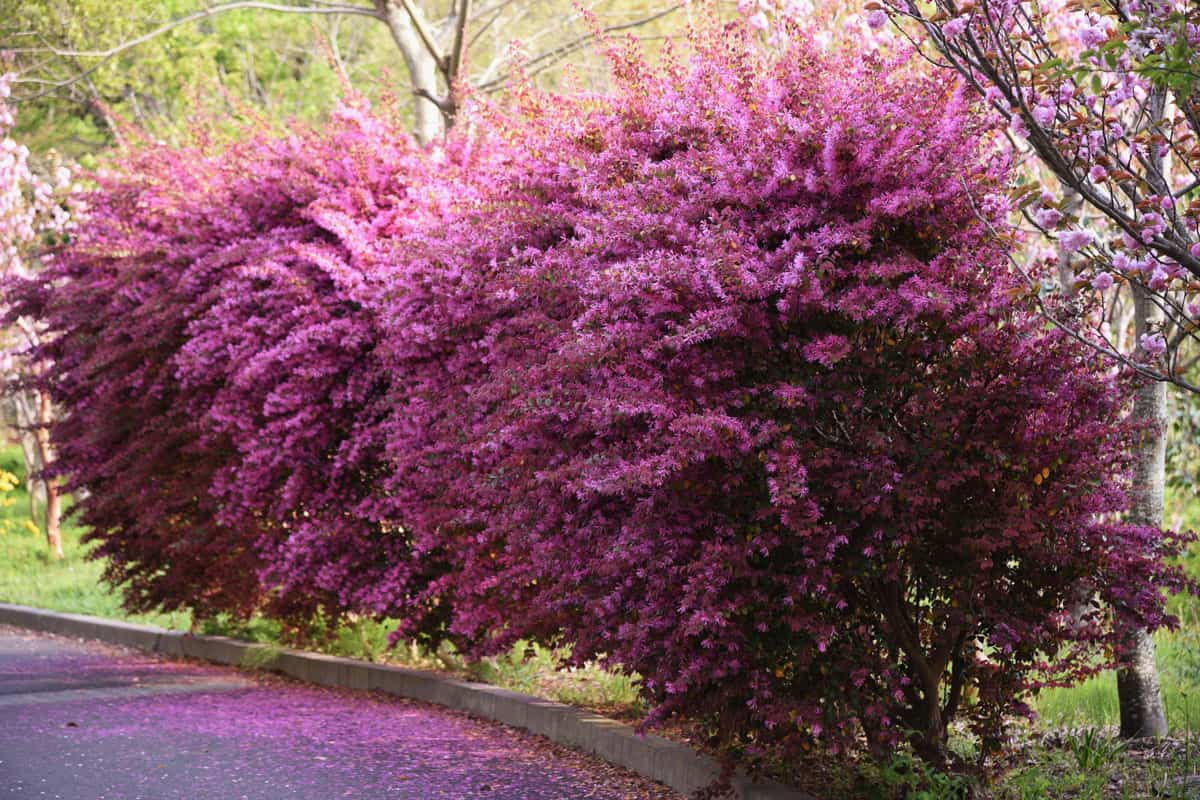 A Chinese fringe bush can live over a hundred years in the right conditions. However, you may not see this for plants growing in more urban environments, but that's not to say it isn't possible.

One of the many reasons gardeners enjoy loropetalum is because of its long lifespan. Additionally, this species doesn't need much attention, so it's great for people with busy schedules.

Of course, that's not saying your Chinese fringe bush won't run into trouble if you ignore it, so try to keep an eye on it. As we covered before, these plants don't do well in high heat or super shady locations, so if you aren't careful, you could shorten your loropetalum's life without realizing it.

How Fast Does Loropetalum Grow?

You can typically expect a loropetalum to grow about 12 inches per year. With that said, certain varieties can double that expectation, so this is different for everyone.

In addition, you want to keep in mind how much sun your loropetalum receives daily. Historically, Chinese fringe with more sunshine will grow faster and stronger, so that can make a difference.

Also, a loropetalum with good watering and not too much heat will grow better in the summer months. Heat exhaustion can cause your plant to become stunted, ultimately stopping it from getting taller or wider.

To Finish It All Up 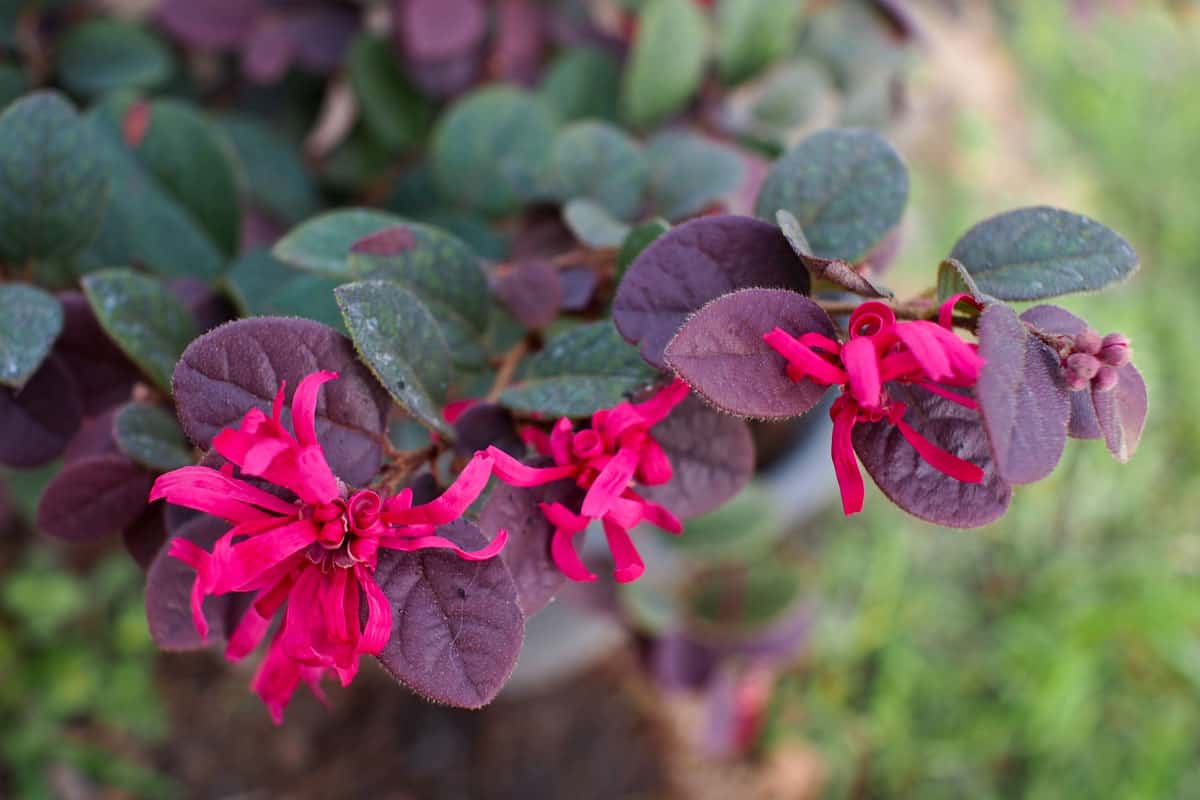 Whether you have a few loropetalum growing in your yard or want to plant some, it's essential to know how to maintain them. We found two main reasons a Chinese fringe bush will die are too much heat and not enough sun exposure.

Additionally, overwatering a loropetalum can put it at risk for root rot, so don't get too wild with your schedule. It's also important to have your plant's soil drain well, so the sandier, the better.

Regardless, try to give your loropetalum 4-6 hours of daily light, and don't be afraid to cut back on watering in cooler seasons.

Made it this far? Check out these helpful related garden posts below!