Realizing one of your favorite plants is dead can be devastating. Do you have a sickly wisteria you're worried has died but don't know how to tell? What are common signs of a dead or dying wisteria vine? Is it possible to bring a dead wisteria back from the dead?

We'll answer all of these questions throughout this article.

Luckily, if you act before your entire plant dies, you might be able to revive it! There are also various ways to prevent wisteria from becoming sick and dying, so it's better to get ahead of the issue.

As we start this post, we will cover all things wisteria and discuss whether yours is dead or not. If you're new to this vining species, can't tell if it's too late for your plant, or have other related questions, we're here to assist. With that said, let's dive right into this topic below! 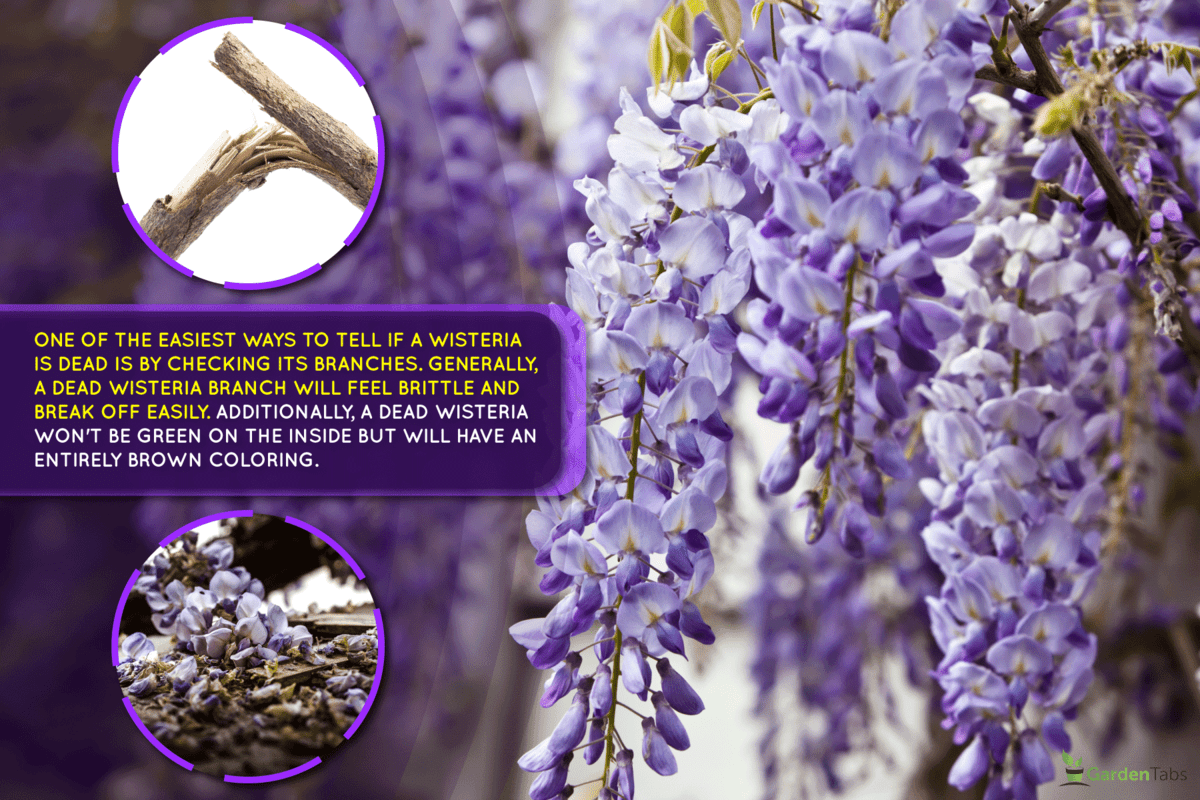 How Do You Know If A Wisteria Is Dead?

If you notice your wisteria doesn't look as healthy as usual, there are some symptoms to be mindful of. One of the easiest indicators of a dying or dead wisteria vine is its branch color/texture.

As we said, you want to bend the branches of your wisteria and see if there's any movement. If the branches feel brittle and break easily, the section or your entire plant is dead.

Furthermore, if the broken branch is brown inside instead of green, it is dead. 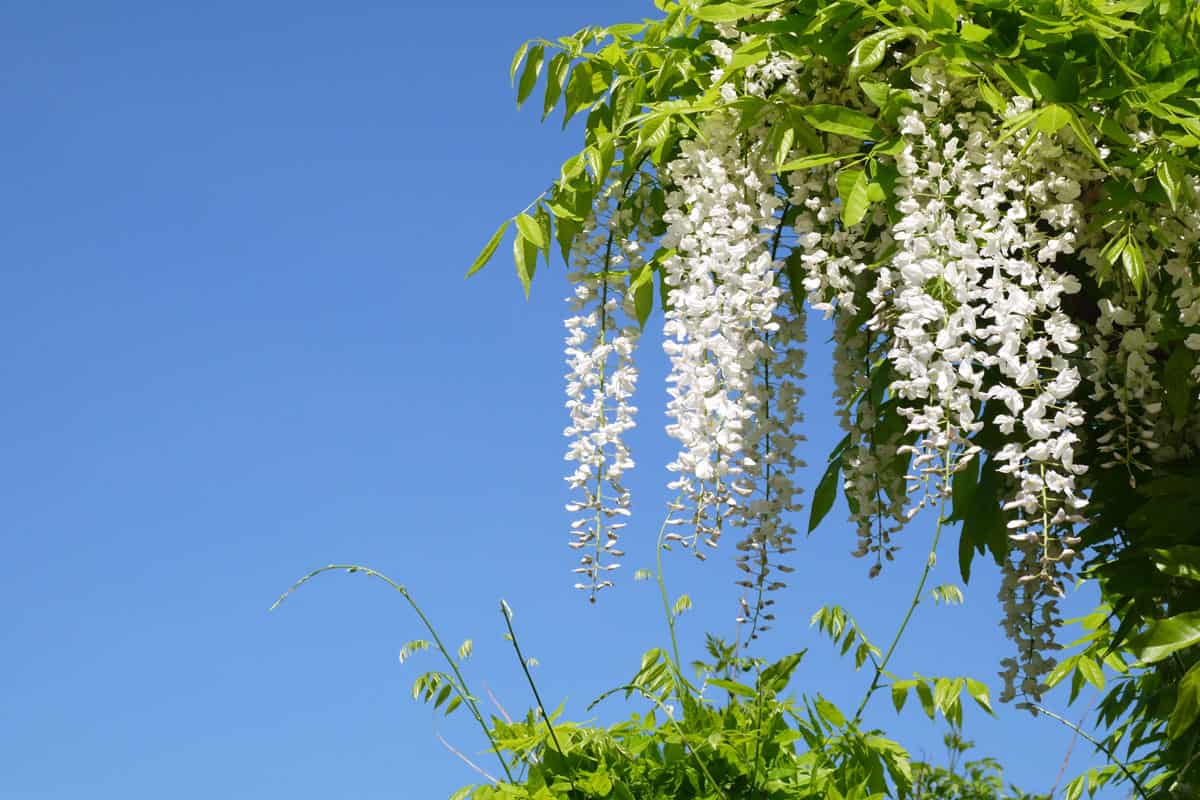 Like any plant species, you need to worry once wisteria becomes brown from the inside out. A live, healthy plant will have green inside and outside of its branches, so color matters.

Moving downward, you also want to inspect the ground near your wisteria. If it feels super dry or extremely soggy, that could be why your plant is sick, dying, or already dead.

What Causes Wisteria To Die? 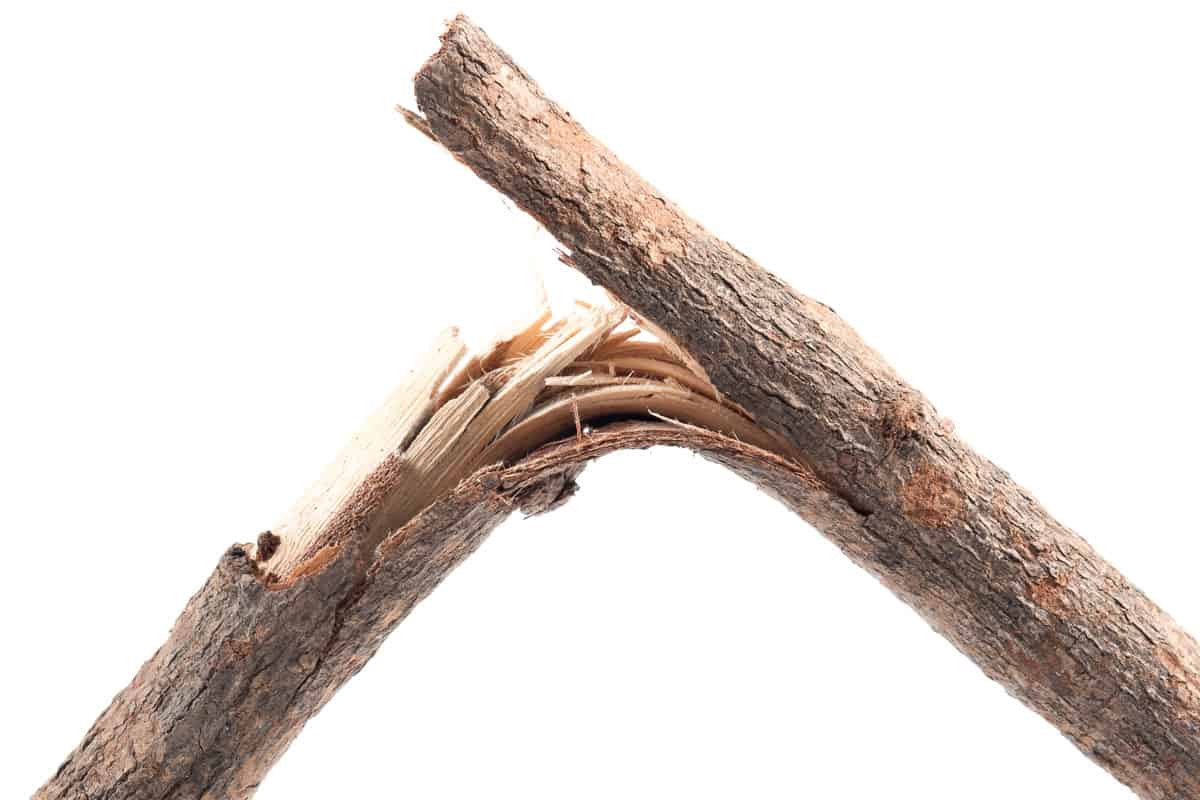 There are many things that can kill a wisteria plant. However, the leading causes are overwatering, underwatering, root diseases such as honey fungus, and infestations.

With that said, your wisteria is likely sick because of its soil conditions unless you can see pests or unusual coloring along its base.

A wisteria can't sit in water for too long before getting sick. So, if you continue to overwater one, chances are, it will become ill and die.

In contrast, if you forget to water a younger wisteria vine or neglect a mature plant, it can dry out from the roots up. Both are easily preventable, so keep a close eye on your vine.

Wisteria is typically an easy grower, often needing sunshine, water, and occasional pruning to flourish. Therefore, yours shouldn't die if you care for it, but this doesn't need to be excessive.

Can I Bring A Dead Wisteria Back To Life? 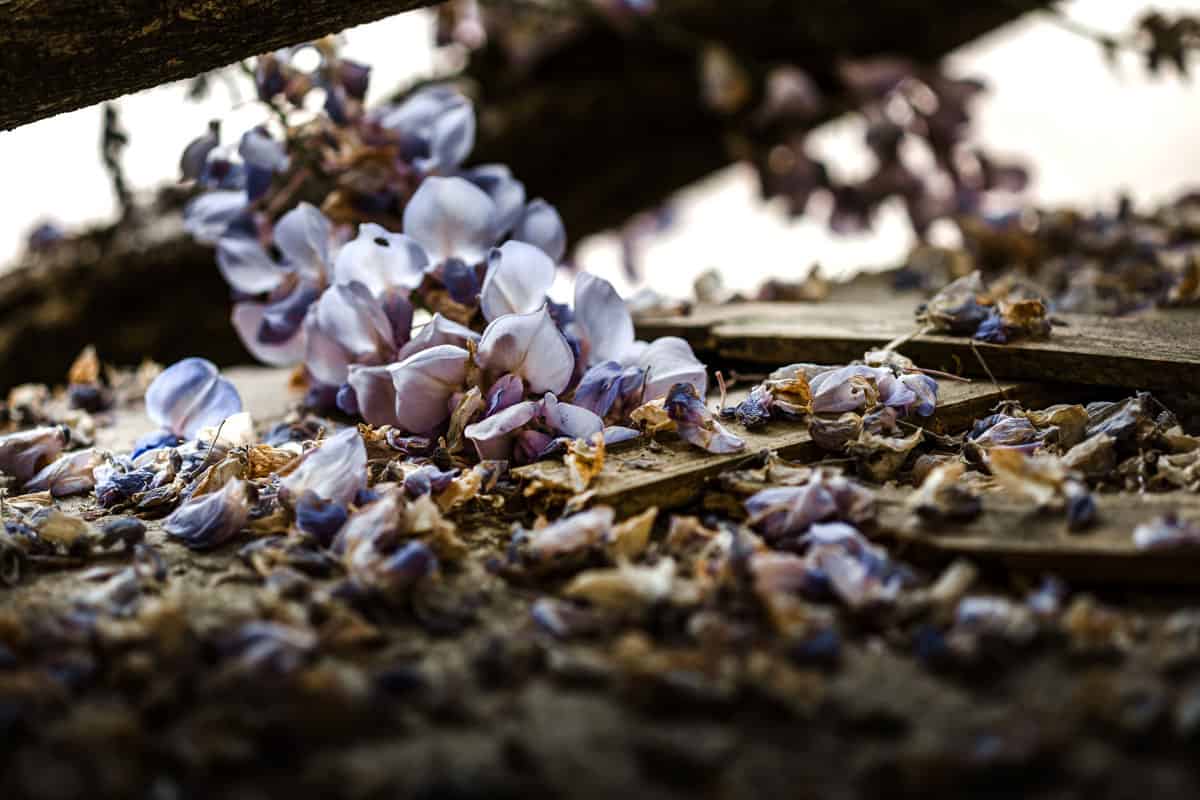 One of the first steps to take when dealing with a dying/dead wisteria is assessing its soil. As we mentioned, too much or too little water can kill a wisteria vine.

So, if your plant's ground feels soggy and it has discoloration, lay off the water for a week or two.

In contrast, if your wisteria's soil is extremely dry and your plant appears sunburned, give it a thorough watering until the top inch of the ground feels moist.

If your wisteria is dying because of a fungus or pest problem, that's when using a pesticide/fungicide may be best. One common pest that harms wisteria is vine weevil grubs, so find a product that targets that species specifically.

The last thing you want to do is kill your vine because you used the wrong chemical.

Why Is My Wisteria Turning Yellow And Brown?

If your wisteria lacks nutrients, that could cause its foliage to turn yellow or brown. Generally, wisteria lacking nitrogen and iron will have a yellowish tone, although this can also be because of overwatering.

If you notice your plant turning colors, check the ground first.

If everything feels okay, then your plant needs more nutrient-rich soil. A great way to amend the earth would be adding compost, which you can purchase pre-mixed or make your own at home.

A benefit of compost is that it's all natural and can even help improve the drainage in your wisteria's soil. However, you must mix it well with the existing ground to ensure it activates and benefits your vine.

On the other hand, if your wisteria is turning yellow or brown because of overwatering, that's another issue. To remedy this, stop giving your plant water until the soil is completely dry and firm.

This compost is organic, premium-grade, packed with nutrients including nitrogen and phosphorous, works for all plant types, doesn't have a bad smell, and the company plants a tree for every bag sold.

Check it out on Amazon here.

How Much Sun Does A Wisteria Need? 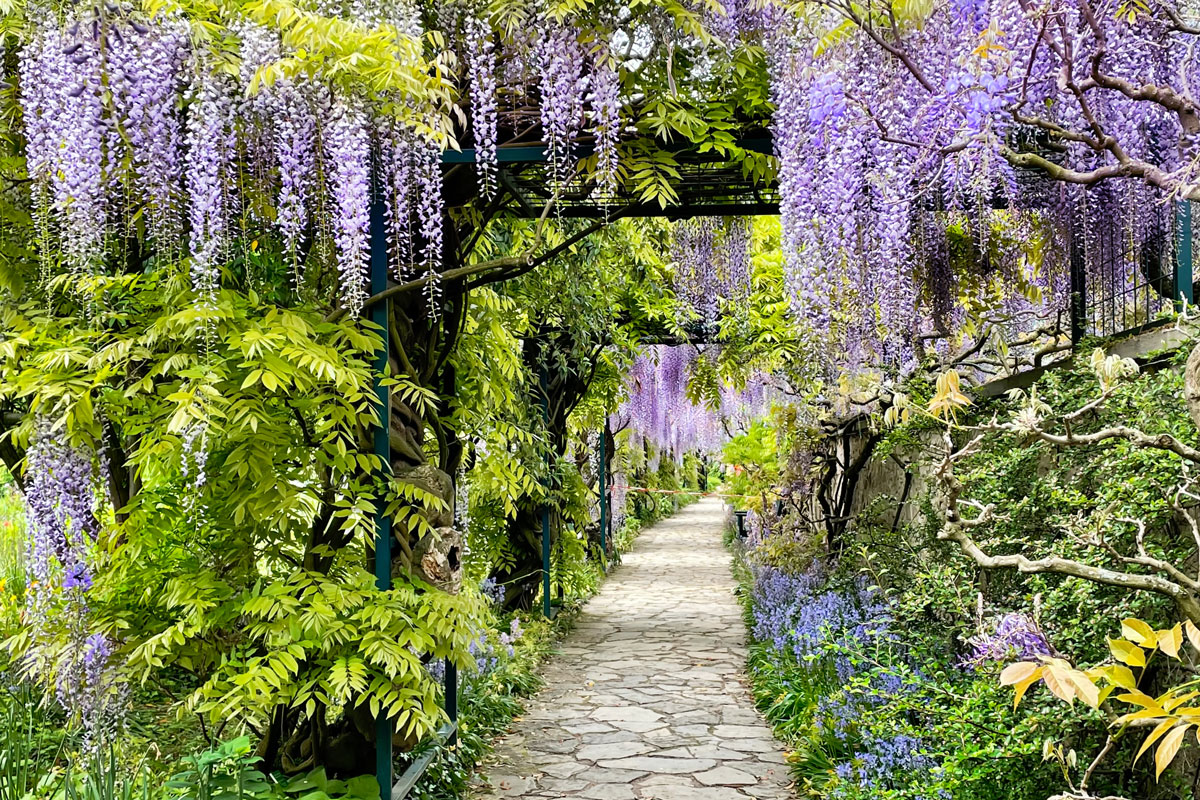 Another key factor to be mindful of with wisteria is sun exposure. Your flowering vine will need at least six hours of direct sun exposure daily to stay healthy.

Of course, a bit of shade can also be helpful, especially during peak afternoon hours. If you're somewhere super hot during the summer, planting your wisteria in the dappled or partial shade can be better long-term.

However, you don't want to plant your vine directly under a tree, shrub, or structure, which can lead to water problems and even death.

Wisteria is very sun-friendly, so the more light they receive, the better it'll grow and bloom.

Many experts recommend planting wisteria in the full sun if you want your plant to sprawl and eventually produce large, stunning flowers.

Furthermore, wisteria with more sun tend to stay healthier during their lifetime versus ones in the shade, so that's a great incentive to move yours into the open.

Can Too Much Shade Kill Wisteria?

Although too much shade won't necessarily kill a wisteria, it can cause other things to happen. Usually, a wisteria without six hours or more of daily sun exposure will be more prone to root rot, waterlogging, and stunted growth.

For example, if your wisteria is in the shade and you overwater it, the ground will take longer to dry. In contrast, if you accidentally give a wisteria too much water and it gets plenty of sunshine, the soil should be able to dry in a couple of days.

That faster dry time can save your plant's life.

On top of that, a wisteria vine in the shade won't grow nearly as fast as one with sun exposure. So, if you love flowers in the spring, you may not see them if you don't choose a good spot for your wisteria.

Again, that's not to say the shade is bad. Partial shade during hotter hours can actually be better for your plant's health, especially if you live in a sweltering USDA zone.

Is Morning Or Afternoon Sun Better For Wisteria?

Between morning and afternoon sun exposure, it can be better to have most of the light happen during the earlier morning hours. As we said, keeping your wisteria away from direct sunlight during peak hours can benefit it if the weather's hot.

However, your plant still needs six or more hours of full sun, which won't all happen in the morning.

Therefore, you should choose a spot in your garden with bright, full sun throughout the morning and more shade during the hotter afternoon.

For example, most places see the most heat between one and three PM. So, if your wisteria bakes in the sun during this time, it's more likely to burn or even die.

Moving it to a shaded spot during this period is generally better, as your plant can take this time to heal and replenish its energy before the sun hits it again.

How Long Do Wisteria Live? 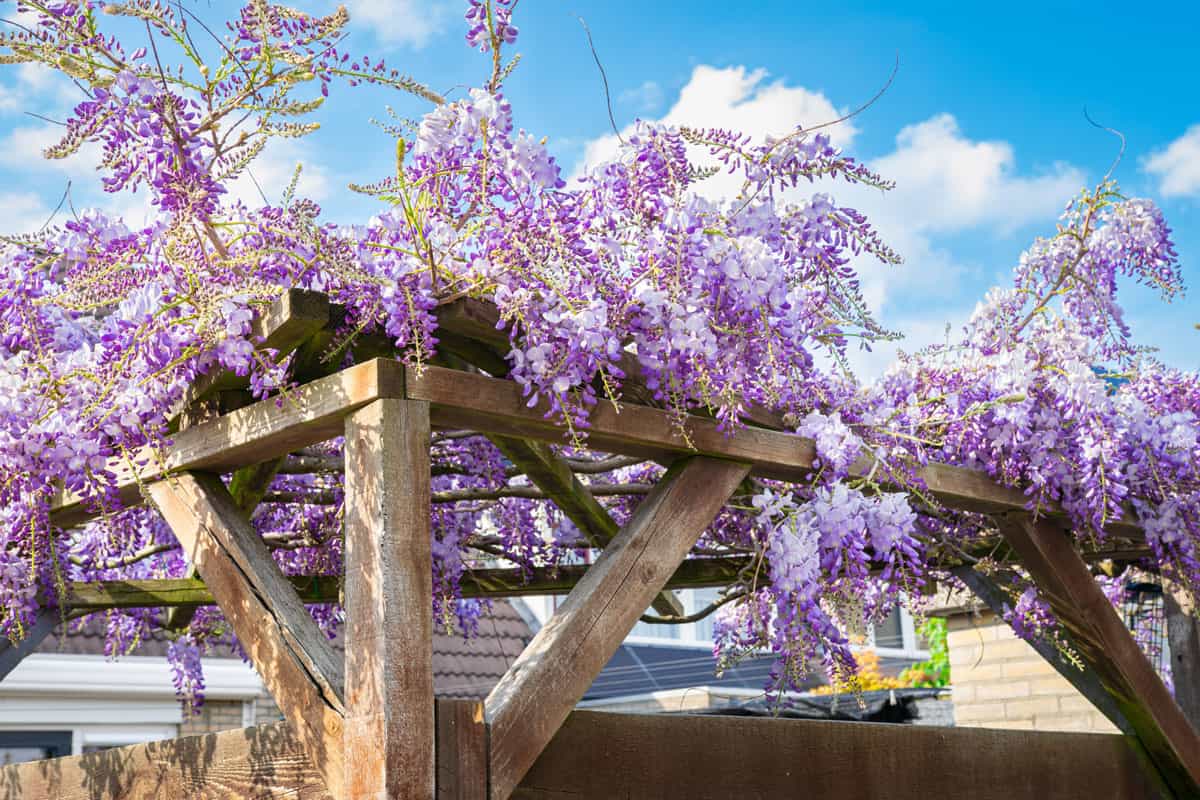 One of the surprising facts about wisteria is its long lifespan. On average, you can expect wisteria to live between 30 and 50 years, so this is a great long-term option.

Since this species is a vine, watching one take over entire walls, structures, or fences around your home is common. Therefore, this long lifespan can be a blessing and a nuisance for some property owners.

One thing to remember is that wisteria doesn't bloom immediately. So even though yours may grow ten feet in the first year, it won't typically flower until two or three.

Instead, this species takes its time, forming a powerful root system and latching onto whatever nearby surface is climbable.

Is Wisteria Easy To Grow And Maintain?

Growing wisteria should be very simple and requires very little maintenance. Usually, after you plant a wisteria vine, it won't need much TLC besides occasional pruning to stay healthy.

However, you want to pay closer attention to wisteria during its first year. Make sure to water it well, add nutrient-rich soil or compost to its base, and give it plenty of sunlight. 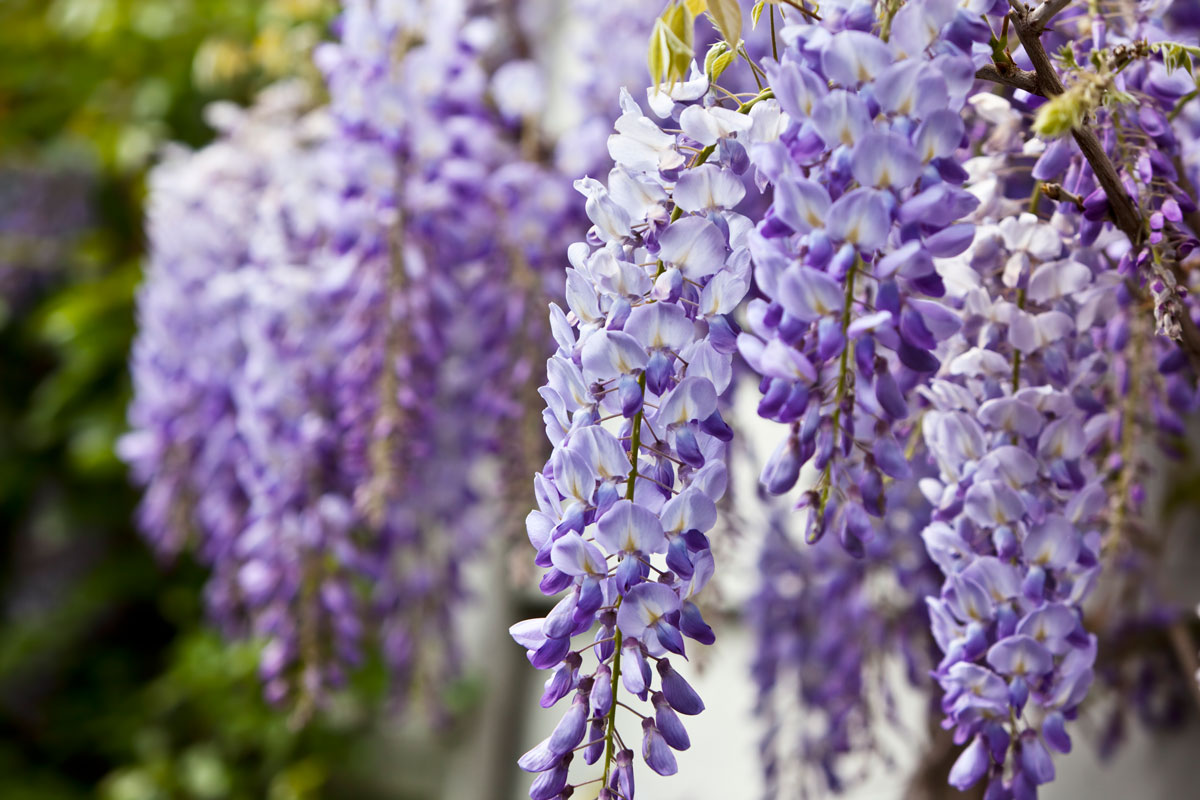 Whether you have wisteria growing in your yard or want to plant it, you need to understand what can cause this flowering species to die.

From what we found, a wisteria can die if you overwater or underwater it, don't give it enough sunlight, or if it develops a fungus/pest problem.

Therefore, we recommend monitoring your plant's branches, leaves, and soil, to ensure it isn't turning brown or dying from the inside.

Made it to the end? Check out these related posts below!

Does Wisteria Have Invasive Roots? [And How To Control Them]

A Plant Is Growing Through My Wall Into House - What To Do?