The Japanese maple tree is a beautiful plant known for its vibrant colored leaves during fall. However, there may be times when your Japanese maple's foliage is half red and half green. Don't worry; we researched why this happens and have the answers below!

Nothing is wrong with your Japanese maple if you notice its foliage is red and green instead of just red. A Japanese maple tree with two colors on its leafage is often the result of the following:

The natural result of these situations is the foliage of green and red. There is no need to worry when you notice this happening, and simple adjustments in the plant's living environment can gradually turn the leaves back to their original color.

Japanese maple trees have simple needs to thrive in their environment. However, while the plant is considered hardy, these conditions can cause unpleasant results when unmet. Continue reading below as we discuss how to maintain your Japanese maple's original red foliage. 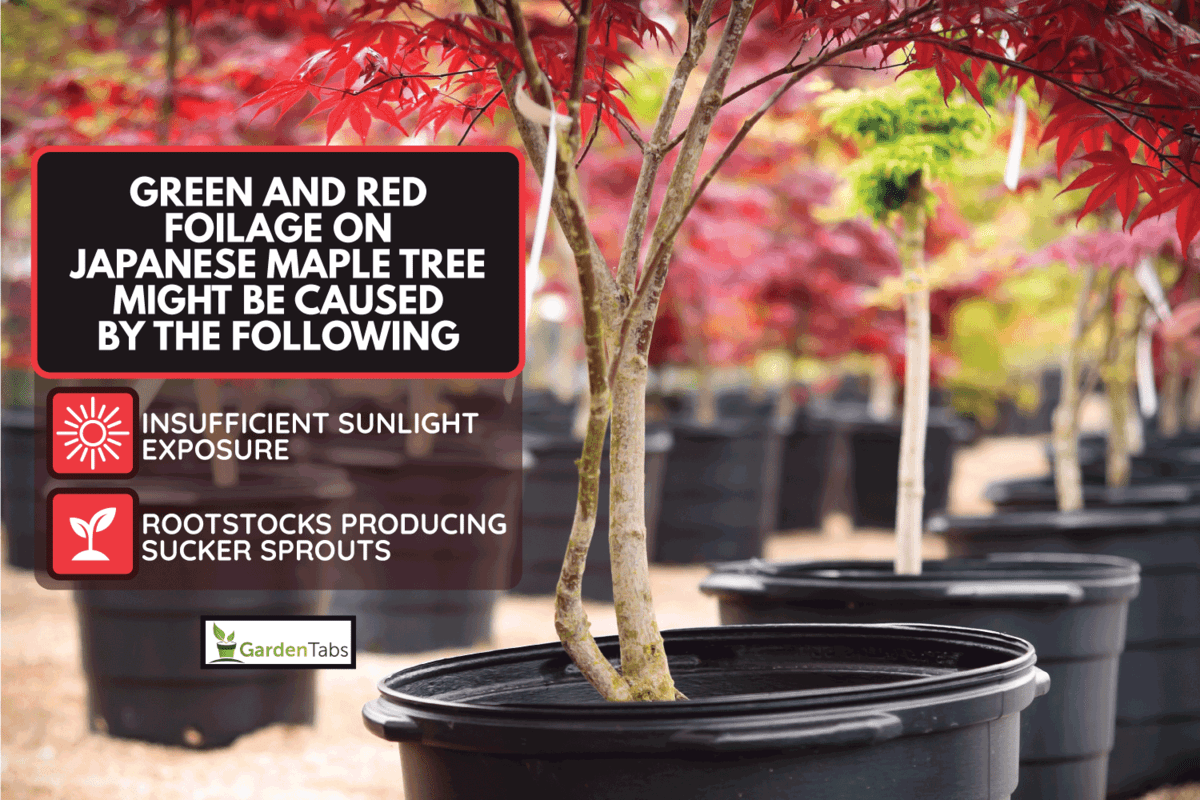 Why Does My Japanese Maple Have Green And Red Leaves?

Japanese maple plant, also known as Acer palmatum, is a woody tree native to counties that can experience temperatures as low as -15 °F. Being a cold hardy plant, these trees are popular for being sturdy and reliable in freezing temperatures.

However, their health and appearance can change depending on their environment. Below are possible reasons why your Japanese maple has two colors in its foliage.

The amount of sunlight reaching the branches can drastically affect the color of the leaves, sometimes resulting in a Japanese maple with a red canopy and greenish bottom foliage.

There is nothing to worry about if your Japanese maple produced this appearance, as it is a natural reaction of the plant towards the amount of sunlight its leaves are receiving.

The two colors could be because the tree is receiving too little sunlight. A Japanese maple requires at least 6-8 hours of direct sunlight.

An insufficient amount will result in the dulling of the tree's usual bright color. The tree will eventually turn green if you have been storing your Japanese maple in a shaded area.

A simple remedy would be to expose the tree to adequate sunlight.

If the tree had been sitting in a shaded area, transfer it outdoors and allow it to stay for at least a week and a half under full or partial sun. Do not relocate the plant to anything less than that, or little to no change will occur.

Take a look at this video for more details:

It is important to note that Japanese maples are cold-hardy and not heat-hardy plants. While they require full sun to produce vibrant colors, keeping them out of harsh heat is best to avoid burning the leaves.

This means that you should take note of the US hardiness zone where your Japanese maple is planted. From there, you should figure out which season with the full sun will benefit your plant best.

However, if your plant has created a distinct division of green and red foliage, then a possible reason could be that the rootstock has started propagating itself.

This means the original tree stump had been growing instead of the branches grafted into it.

A rootstock is the bottommost part of a chopped tree where less hardy plants are grafted to allow the weaker plant to benefit from the robust characteristics of the original tree.

However, since the rootstock is alive, it can grow again, mainly if the right living conditions are provided. Sucker sprouts, or plants that grow out of the rootstock, will carry the genetic characteristics of the original tree.

In the case of red Japanese maple, the sucker sprouts will look like the green Japanese maple tree, resulting in two-colored foliage.

Like the result of poor sunlight exposure, this does not mean something is wrong with your Japanese maple tree. Again, this is a natural occurrence, and thoroughly removing the sucker sprouts can be done to restore your preferred appearance of the plant.

How Do I Remove Japanese Maple Sucker Sprouts?

Removing sucker sprouts from trees is a straightforward task, but you have to be mindful of the process unless you do not mind an asymmetrical appearance with your tree.

Usually, Japanese maples are revered for their aesthetic features, so it is best to do the pruning carefully, which is also recommended to avoid injuring the plant.

Below are some tips for adequately pruning off sucker shoots from a Japanese maple tree:

Why Is My Japanese Maple Tree Turning Brown/Purple?

As discussed above, Japanese maple trees are not heat-hardy plants. This means that harsh heat can negatively affect the plant's health, resulting in unfavorable appearances.

Japanese maple tree foliage turning in darker colors is often because of prolonged exposure to harsh heat that burns the leaves. This reaction, often called 'leaf scorch,' causes the brownish or purplish tinge on the usually vibrant red leafage.

While it is recommended for Japanese maples to receive 6-8 hours of full sun, this is still situational, and it is up to your US hardiness zone how much you should add or deduct from this recommended time frame.

It is also possible for your tree to be more sensitive than other plants, so if your tree's foliage is suffering from intense heat, proceed to relocate the tree to partial sun and refrain from insisting on the recommended length of sun exposure.

Are There Japanese Maple Trees That Naturally Change Colors?

Japanese maples have a variety of species that showcases different vibrantly colored foliage.

Not only do they bear colors other than red, but they also change hues depending on the season.

Below is a list of examples of Japanese maple trees that changes colors:

The Japanese maple tree is known for its usually vibrantly colored foliage that brightens during fall. Sometimes natural circumstances can cause this plant to produce leaves with two tones or greenery with distinctly two colors separated.

Check out some of our other related posts:

Can You Root Japanese Maple Cuttings In Water?