Crabapple trees can add beautiful color to your yard, as well as serve as a food source for birds and other animals. Although crabapple trees are pretty tough and resilient plants, they can benefit from occasional pruning. But exactly how and when should you prune a crabapple tree? We’ve researched this question and have come up with an answer for you.

The best time to prune a crabapple tree is in late winter or early spring. Crabapple trees usually don’t require heavy pruning. But if you do need to prune them, here’s how to do it:

The truth is that it doesn’t matter in what order you do the above things, as long as you do them. They can all cause potential problems for your crabapple tree. In this article, we’ll provide you with all the details you need to know or to prune your crabapple tree easily and effectively. Continue reading to learn more. 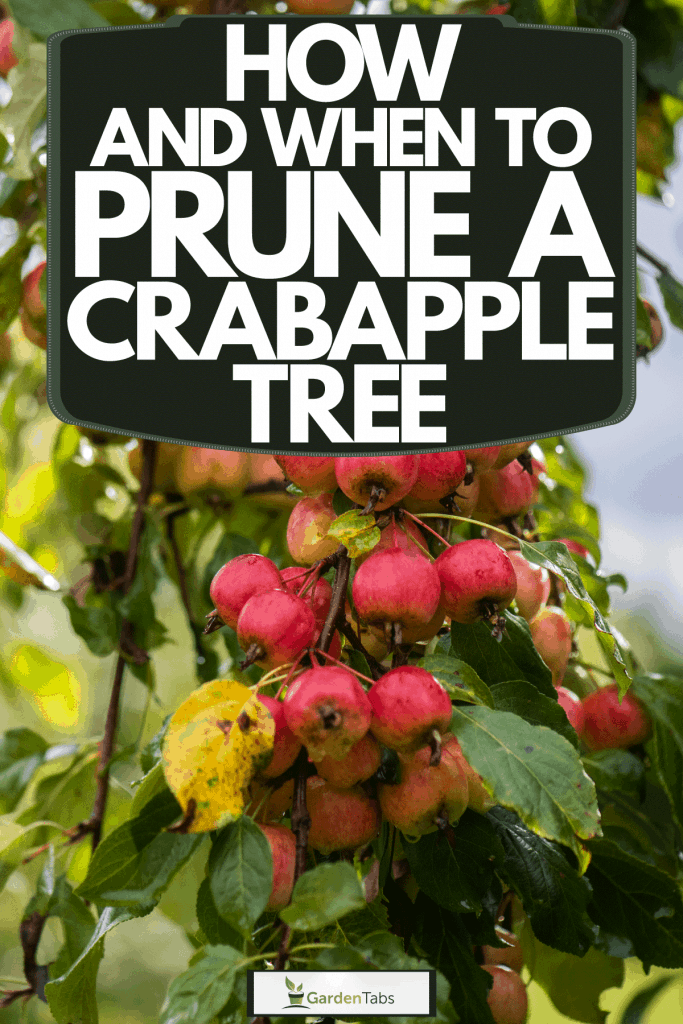 Why Should You Prune A Crabapple Tree?

However, as with any plant, you should monitor the tree regularly to look for potential problems. If you notice any of the following signs, it is a good idea for you to prune your crabapple tree:

Even if you don’t notice any of the above signs, occasional pruning is good for the tree. Pruning trees helps to maintain their shape and can encourage healthy growth. Of course, it is only beneficial if you do it at the appropriate time. That brings us to our next point.

When Should You Prune A Crabapple Tree?

The best time to prune a crabapple tree is late winter or early spring when the tree is dormant. But you should wait until after the last frost has passed, which could vary based on the climate where you live. If you’re unsure whether or not the extreme cold weather has passed, it’s best to err on the side of caution and prune later rather than sooner.

You want to make sure that you prune a crabapple tree before new growth starts to form on the tree. If you wait until after buds begin to form, you risk cutting off some new growth. Your tree may not flower or produce fruit during the new growing season as a result. Even if the tree does still flower, it may not look as full. If that happens, there won’t be much you can do except wait until the following spring.

You may also like: Do Crabapple Trees Bloom Every Year?

How To Prune A Crabapple Tree 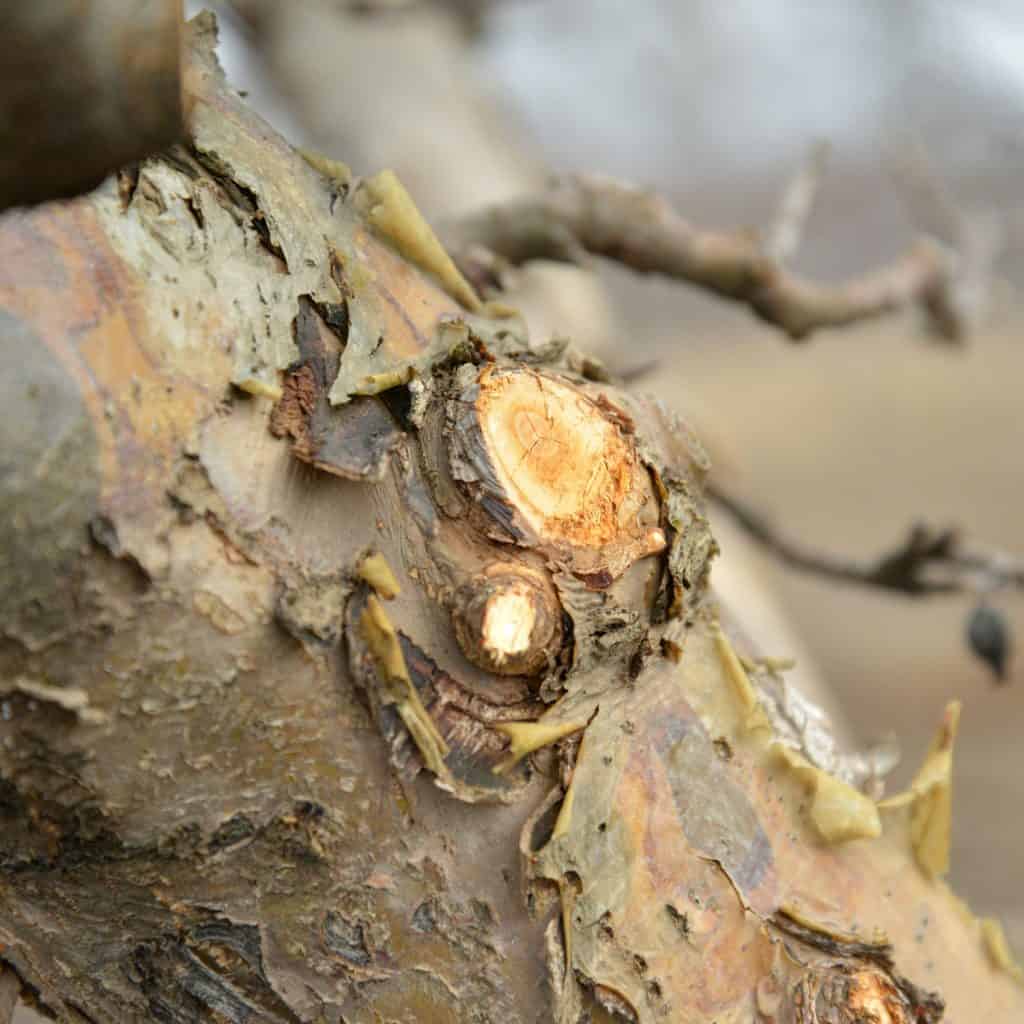 Now that we’ve covered the importance of pruning a crabapple tree, as well as doing so at the right time, it is time to learn exactly how to prune it correctly. Remember that it doesn’t necessarily matter in what order you do the following things. What is important is that you do them all for the health and well-being of your tree.

It’s also important to realize that you don’t need to prune your crabapple tree heavily. A good rule of thumb is to prune no more than 25% of the branches unless, of course, there is a more significant problem such as disease. For larger trees with more branches, you can thin them out over several years instead of all at once.

There are a few basic tools you will need:

Small shoots can crowd the main branches, spread disease easier, and steal nutrients away from the rest of the tree. That’s why it is important to remove them. Unlike larger branches, you can remove them at any time of the year because they are unwanted growth. There are two types of shoots to look for: water sprouts and suckers.

Water sprouts are shoots that grow upright out of larger tree branches. If they aren’t removed, they can spread diseases from one large branch to another. You don’t want large branches that are diseased since these branches are the ones that form much of the tree’s structure.

Suckers are shoots that grow upright out of the ground at the base of the tree. They are called suckers because they can “suck” energy and nutrients away from the main tree if they aren't removed. Also, they can grow into separate larger trunks if they aren’t removed.

Cut Off Any Diseased Branches

Lastly, remove any branches showing signs of disease, particularly fire blight, which is common in crab apples. The main sign of fire blight is leaves that look ash-colored or burnt. As with shoots, you can remove diseased branches at any time of the year. But, you should do it as soon as you notice the disease so that it doesn’t spread to other branches.

Cut Out Any Dead Branches

The next thing you will want to do is look for any dead branches. You will want to remove them because they aren’t providing any benefits for the tree. Dead branches will be weaker than live branches. They may also break easily or feel softer than other branches.

This video will demonstrate how to prune and remove branches from a crabapple tree properly:

Click here to see this pruning saw on Amazon.

Can You Keep A Crabapple Tree Small? 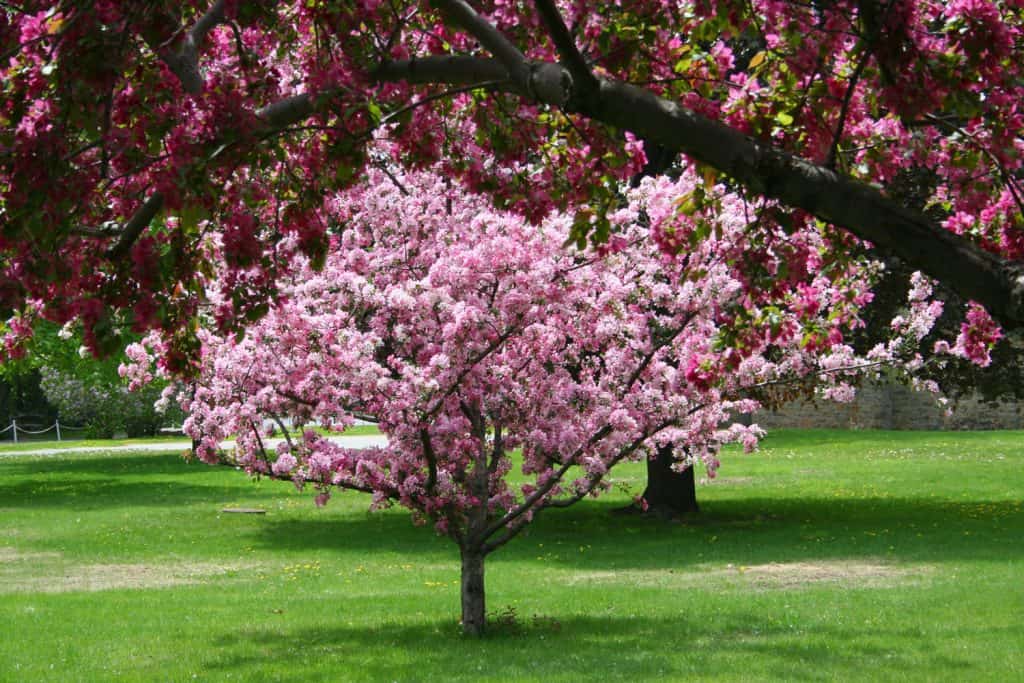 Crabapple trees can grow 10-25 feet tall, depending on the variety. Sometimes the trees aren’t planted in the best places, and if they are allowed to mature, they can obstruct pathways, structures, or other plants. If that’s the case, you may want to keep your crabapple tree small.

To do this, you will want to prune the tree during the late summer. Pruning at this time will allow the tree time to grow, but branches will no longer extend because you will have cut off the growth point. You should then shape the tree, and the tree will better maintain that shape throughout the dormant season and during the next growing season.

You May Also Like: Can You Grow Crabapple Trees In Pots? [And How To!]

How Do You Prune An Overgrown Crabapple Tree?

You prune an overgrown crabapple tree following the same guidelines laid out in this article. Remove the shoots, diseased branches, and crowded or dead branches. But the key is to not prune too much all at once. Unless the branches are diseased, just prune a little of the tree per year instead of all at once to prevent over-pruning.

Can A Tree Die From Pruning?

As long as the tree is pruned correctly and isn’t over-pruned, your tree shouldn’t die. But even over-pruning isn’t the exact cause of a tree dying. Instead, over-pruning reduces leaf growth, which makes nutrients for the tree. Over-pruning also provides easy access to the tree by insects and disease. The tree could die due to lack of nutrients or stress rather than as a result of the pruning itself.

What Is Proper Tree Care After Pruning?

Although pruning is beneficial for many trees, it can also cause stress. It’s a good idea to water a tree immediately after pruning it. Be sure to water the tree regularly after pruning as well, especially during drought periods. Fertilizing the tree can also help close the areas that were pruned and promote new growth.

We hope this guide was helpful in teaching you how and when to prune crabapple trees. Remember that unless you notice signs of disease or are removing shoots, it's best to wait until later winter or early spring before new growth starts to form. At that time, remove any dead branches or branches that crowd or scrape against other branches. Thanks for reading!