Having gorgeous flowering plants in your home and garden can change the ambiance instantly. Do you have a few orchids growing but don't know when their buds will start to open? Does this usually take a long time? Are there ways to make orchids bloom faster?

Luckily, we have these answers and many more below in this post!

With a new spike, you can generally expect an orchid to bloom after 90-120 days. Of course, that's assuming your orchid already has an established base/spike where the bud can form and open.

However, if you grow an orchid from seed, this process could take between three and eight years, so it's better to grow them through division.

So, even though orchids bloom for prolonged periods, waiting for this to happen can take patience.

As we start this article, we'll cover all things orchids and discuss how long it takes for them to bloom. Whether you're new to this type of flower, waiting on a bud to open, or have other related questions, we're here to help! With that said, let's dive right into this topic!

How Long Do Orchids Take To Bloom Once Buds Appear?

You can typically expect your orchid to bloom after three months post-bud. As we mentioned, this can depend greatly on the age of your plant and whether it has developed enough to produce multiple buds and spikes. 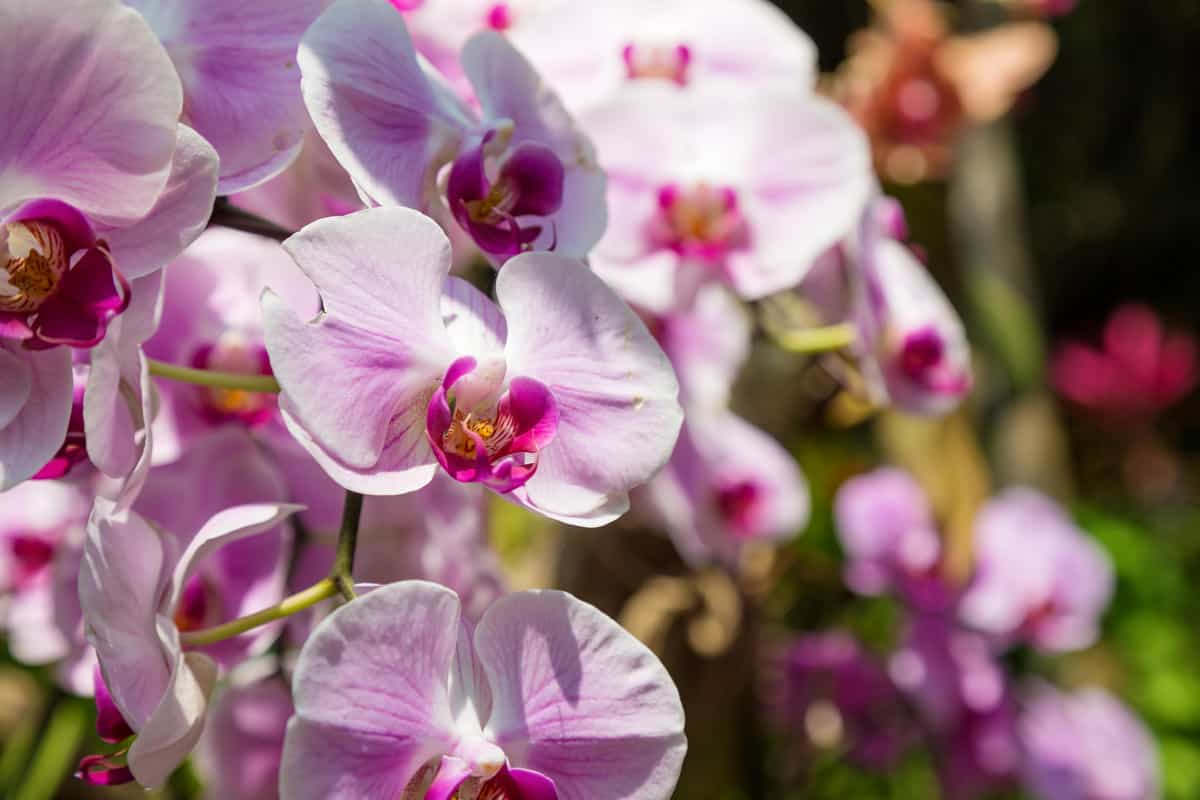 You will often find orchids at nurseries and grocery stores that are already somewhat mature. Therefore, if they have buds, you should see them open within the next few months.

Again, this isn't always 100% accurate for every orchid, as some need extra time to garner the strength to open their buds. Orchids can be temperamental if their conditions aren't right, ultimately leading to issues with their buds flowering.

According to OrchidWeb, you can expect a new orchid spike to bud and flower within 90-120 days. So, this could be in as little as three months, while some will take closer to four.

How Long Does It Take For A Baby Orchid To Bloom?

If you have a baby orchid you want to grow, expect a longer wait time for flowering. Generally, this entire process will take between one and three years, so this isn't for the faint of heart.

As we said, orchids can be slow to bud and bloom. Therefore, the younger and less developed one is, the longer you'll need to wait to see it open up and flower.

According to experts, once a baby orchid does bud and flower, it will grow extensive roots, which will help it to bloom again next year. So luckily, you won't have to wait such a long time for the next flowering.

Orchids are unique plants, often keeping their flowers for months. So in retrospect, the long wait becomes worth it.

How Do You Get Orchid Buds To Bloom?

There are ways to expedite the process for those who want to see beautiful orchid flowers sooner. One of the easiest ways to get your orchid to bloom faster is by placing it near a chilly window.

Of course, your flower can get warm and receive light during the daytime, but to encourage blooming, it needs to become cold through the night. 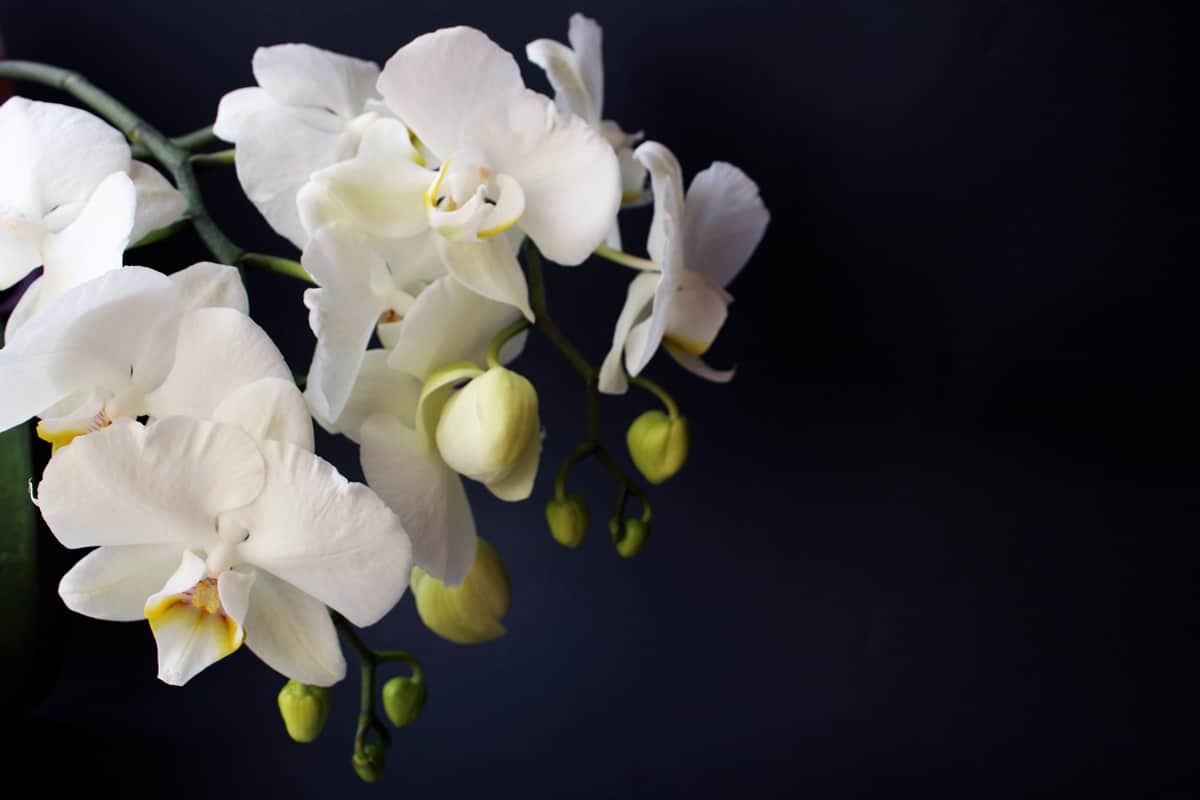 When the sun goes down, your orchid will become chilly, stimulating its buds to develop and blossom. This species is such a great houseplant because of its love for the cold.

Again, you don't want to leave an orchid in freezing weather or the snow, but a drafty window through the night can be beneficial.

On top of that, this method also works for re-blooming orchids. So, if you already saw it flower, you can encourage your plant to make more buds and have them open again!

Why Won't My Orchid Buds Bloom?

If you try the above method or notice your orchid won't open its buds, this could be for a few reasons. Generally, orchids won't bloom if they don't get enough warm light during the day.

Low lighting can cause the buds on your orchid to abort, meaning they will not open but die.

Furthermore, pollution can also trigger an orchid to stop blooming, so if you're in the city, that could be what's causing trouble. The best thing to do for a budding orchid is to keep it in a stable environment.

So, you want to create a watering schedule, give it warm daytime light, and keep it away from pollutants.

On the other hand, overwatering and too much sunlight can also cause buds to die, so this takes precision, patience, and close attention.

How Long Do Orchids Bloom For? 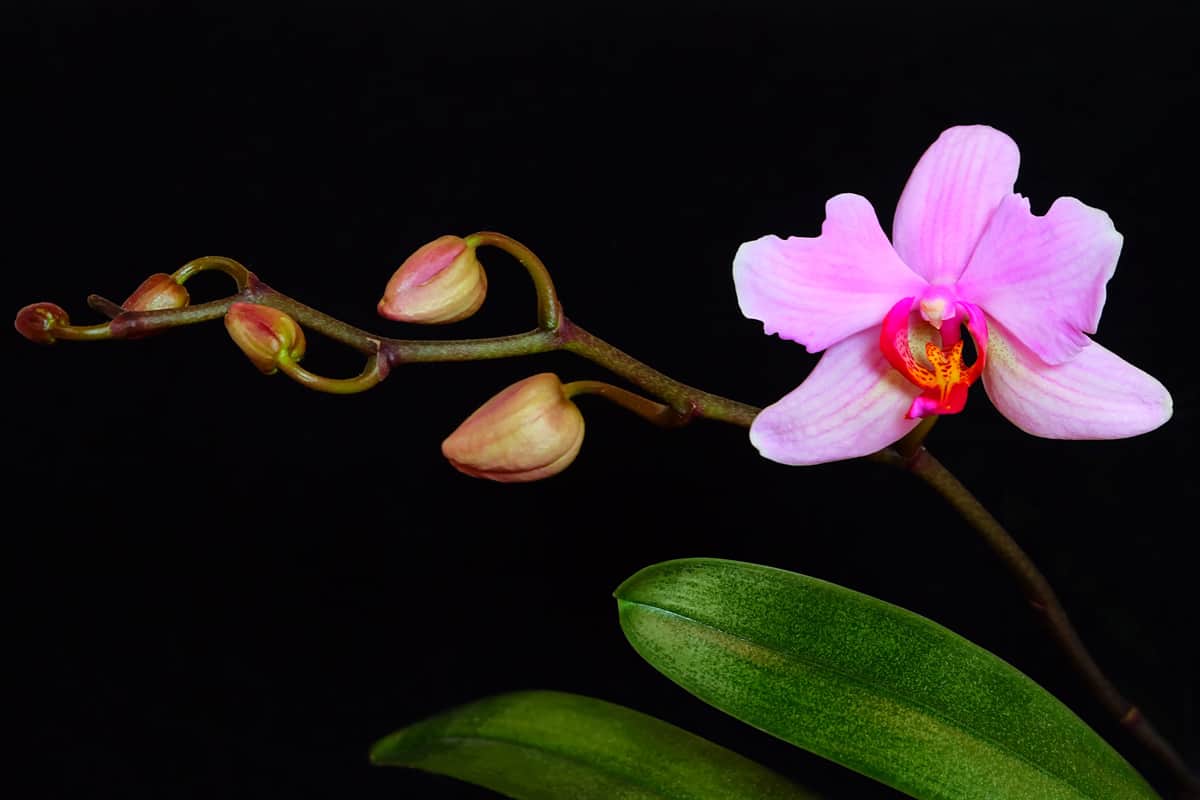 Since most orchids bloom once per year, it's understandable you want your flowers to last as long as possible. Typically, the blooms on an orchid will stay open and healthy for around six to ten weeks.

So, that's great news for anyone who wants to enjoy their orchid blooms for a long while, although this can depend on how well you care for your plant.

A common issue gardeners run into with orchids is quick, lackluster blooms.

According to experts, it's better to purchase orchids that are just beginning to bloom if you find one at the grocery or nursery.

That's because if one is already in full bloom, you may only get flowers for a couple of weeks. Again, this can be hit or miss, but try to find orchids with fewer flowers and more buds bursting at the seams.

Will An Orchid Bloom More Than Once Per Year?

Although most orchids only bloom once per year, if they're very happy and healthy, they could continue to flower until their buds stop developing.

As we mentioned, orchids typically bloom between six and ten weeks on average. Therefore, that's about half of a season, so you can't expect one to continue blooming for more than a couple of months.

However, there are longer-blooming orchid varieties, like the phalaenopsis orchid, which flower for up to four months at a time. So, you might be better off finding an orchid that blooms long rather than trying to convince one to produce more buds and flowers.

Again, this depends on how well you maintain your plant, so every orchid has a unique blooming timeline. Remember, the more stable the conditions, the more your orchid will flower!

How Can I Tell If My Orchid Has Buds Or Not? 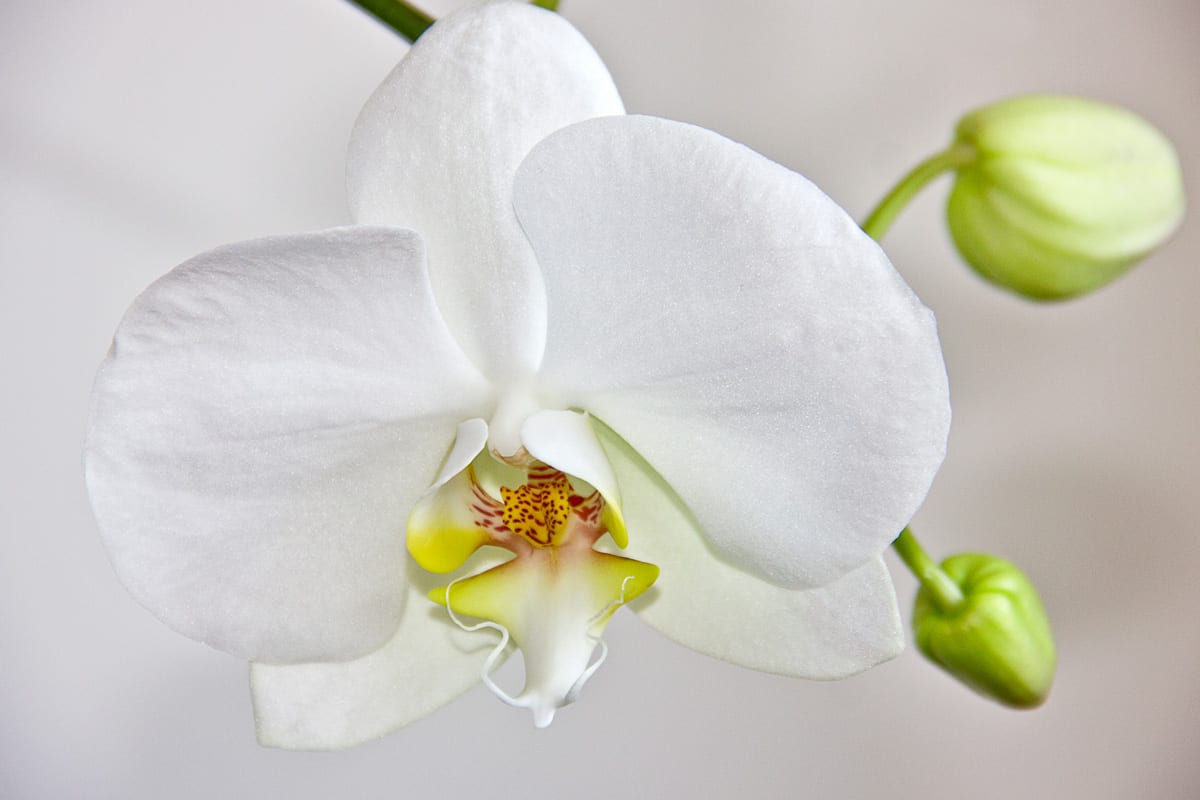 New flower spikes are the first things you want to look for on an orchid. Generally, these will be greener than roots and have a flatter, mitten-shaped tip.

As your spike grows, you will notice they stay green to its tip. Orchid spikes usually sprout between the plant's leaves, not from the plant's center, so keep that in mind.

After a few months of watching the flower spike develop, you should see a tiny bud form. From there, a gorgeous orchid will appear over the next 90-120 days and bloom for the next month or so.

Luckily, most orchids you find at the store already have developed flower spikes with buds, so this isn't usually hard to determine on your own.

Furthermore, you might even see new budding forms while your orchid flowers, which means it is happy, healthy, and will continue to bloom.

How Do I Grow A New Spike On My Orchid?

If you want to try growing a new orchid spike from your plant, place the plant in an area with a lower room temperature. Ideally, this will be around 55 and 65 degrees Fahrenheit at nighttime.

According to Matsui Nursery, placing an orchid away from your heater can encourage new spikes to shoot up from the soil. As we mentioned earlier, orchids do best with colder night temperatures.

On top of that, you should have the most success growing new orchid spikes during fall and winter. 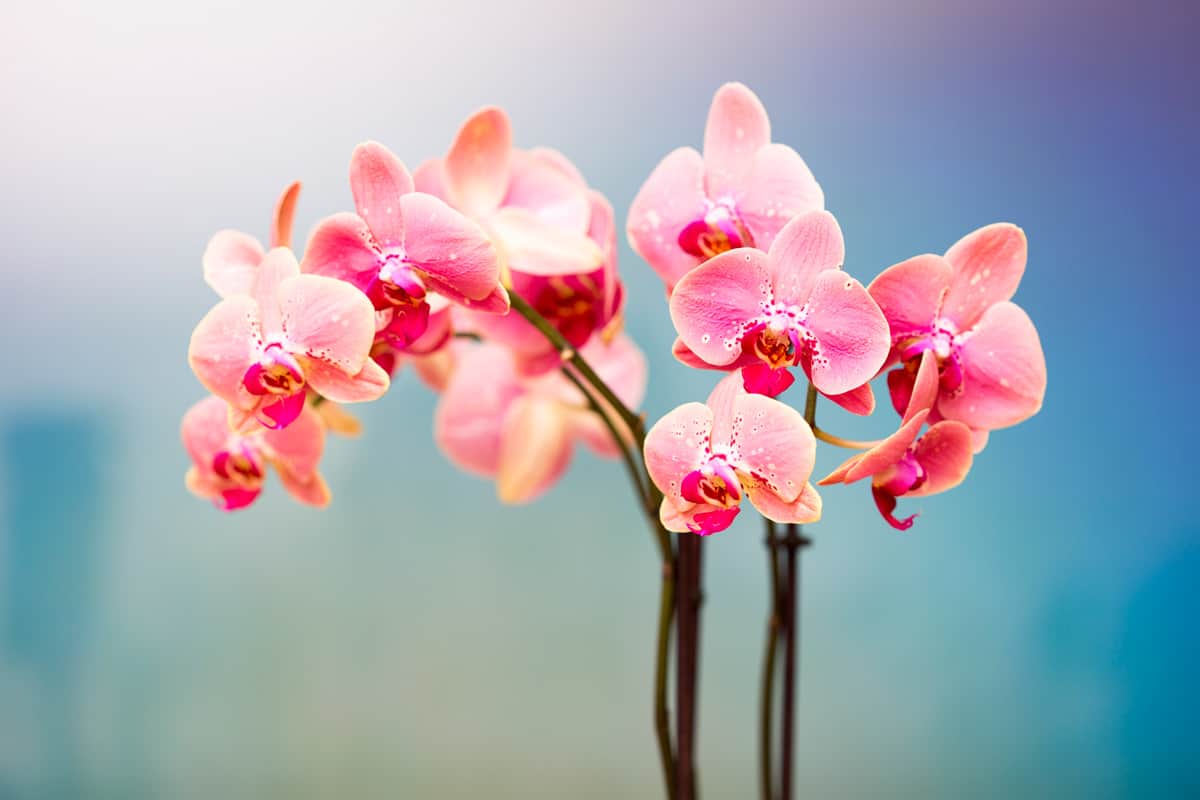 That's because the temperatures will drop at night, even in your house with heat. Windows tend to let in small amounts of cold air, even if they're closed, which your orchid enjoys.

So, try to follow these steps, and you should see a new spike come out from the ground within three months!

What Do You Do With An Orchid Once The Buds Fall Off? 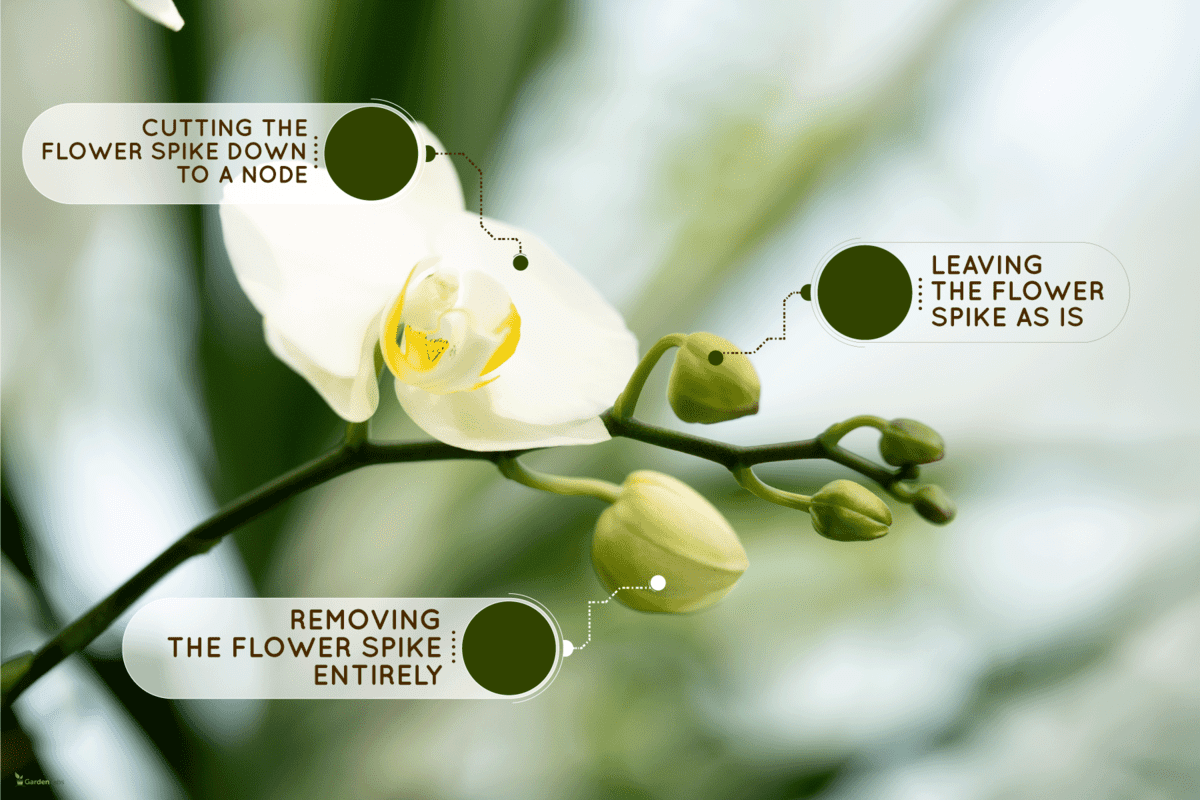 Once your orchid blooms and its buds begin to fall, there are three things you can do. These include:

Whichever you choose comes down to your understanding of orchids and your plant's health. Generally, we recommend keeping your orchid as is so it doesn't undergo any unnecessary trauma.

According to Pallen Smith, one time when it's beneficial to cut back your orchid spike to the base is if it turns brown or starts to die.

In this situation, removing the entire spike could save the rest of your plant, as one sick part can cause the others also to fall ill.

Luckily, if you maintain your usual orchid routine, your plant shouldn't die or become sick after it blooms and sheds the buds. Consistency is key!

Whether you have an orchid growing inside or outdoors, it's essential to understand its blooming pattern. We found that orchids typically take 90-120 days to bloom once they form a mature enough spike and bud.

However, growing your orchid from seed can become years of waiting for the first flower. As we covered, orchids are slow to develop and can take months to form buds and eventually bloom.

Again, once the buds of your plant open, you get to enjoy gorgeous flowers for months at a time, making the waiting well worth it.

Made it to the end? Check out these related garden articles below:

Can Orchids Survive Winter Outside?