Finding plants that will live a long time in your garden can be tricky. Do you want to try planting Schefflera but don't know whether it will stay alive for more than a few years? Well, we've done some research and have the answer for you. Let's get right into it.

Schefflera plants will usually live between 20 and 25 years if the conditions are right. Climate and overall upkeep will play a big role in how long Schefflera lives, so make sure to plant yours somewhere that gets plenty of bright light, and don't forget to fertilize regularly.

As we start, we will cover all things Schefflera and discuss how long you can expect one to live. Whether you have one currently growing in your garden or want to plant a couple, we're here to offer some help. With that said, let's dive into this post! 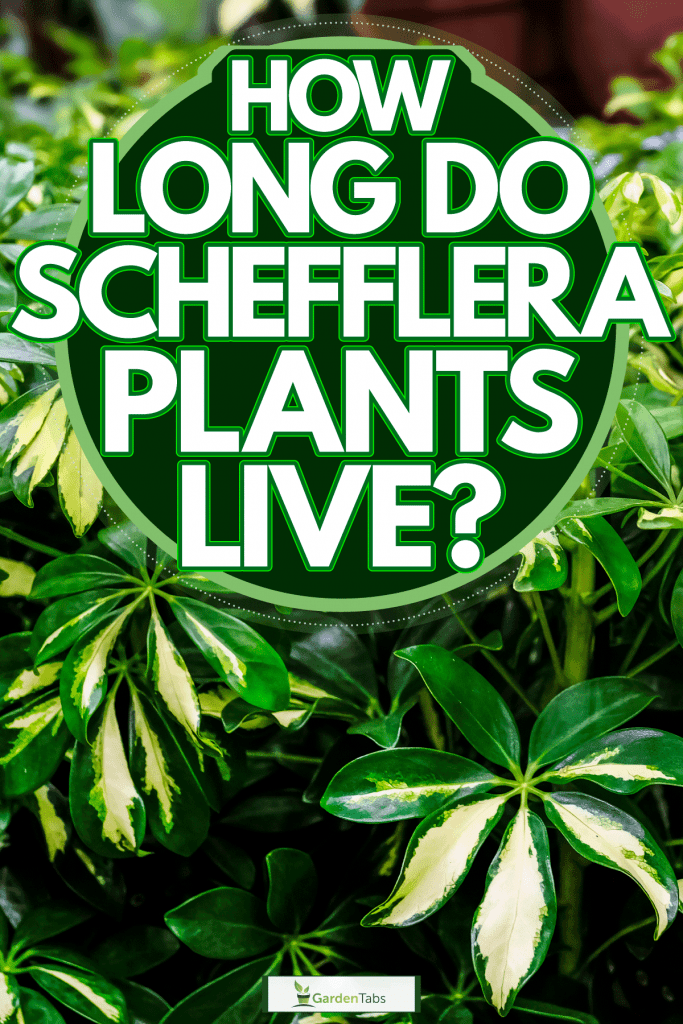 Schefflera isn't super long-living, but they can last you around 25 years. Although every plant ages differently, you can usually expect a Schefflera to stay healthy for about two decades.

Besides being relatively easy to take care of, Schefflera doesn't need a ton of maintenance and does well both inside and outdoors. That said, Schefflera isn't very cold-tolerant, so try to keep yours somewhere with mild weather year-round. 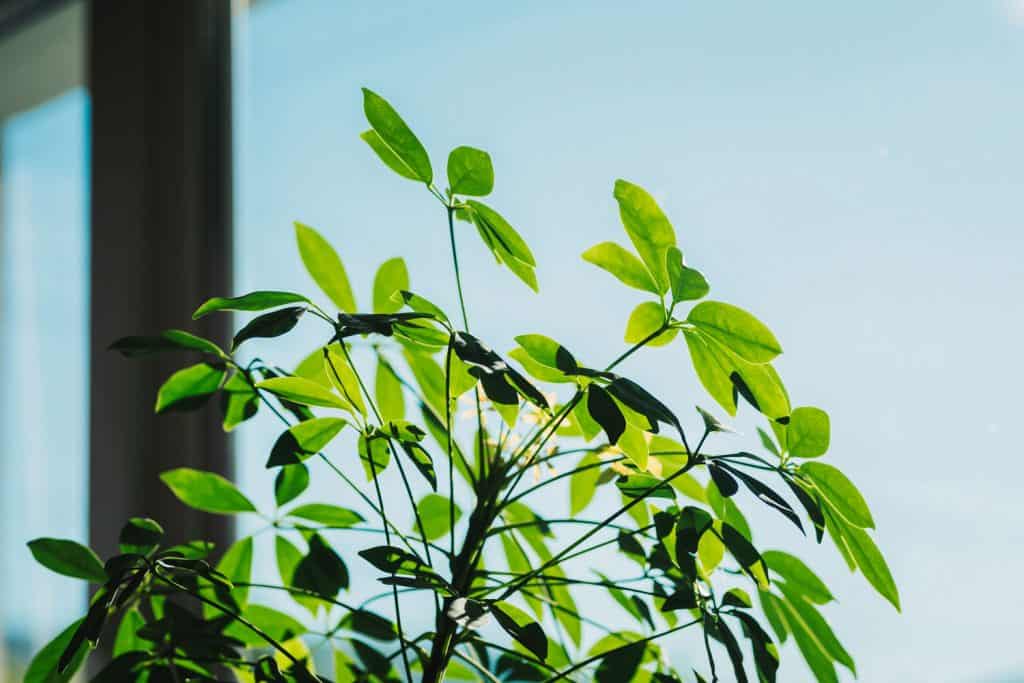 Where Can I Grow Schefflera?

Ideally, you want to grow a Schefflera plant in USDA zones 10-12. As we mentioned, these plants prefer mild weather and don't do well in colder climates, so try to keep yours somewhere that won't get too chilly.

In general, Schefflera does best in temperatures between 65 and 90 degrees, specifically sub-tropical climates. Schefflera are also great indoor plants, so if you have colder winters, we recommend moving yours inside until the weather improves.

How Fast Does A Schefflera Grow?

Schefflera is pretty fast-growing, averaging around three feet per year. Especially if you have yours outside, you might even see more than three feet of annual growth, so make sure to plant yours somewhere bright.

With that said, indoor Schefflera will be slower growing than their outdoor counterparts, usually averaging closer to two feet annually. Every plant is different, but we recommend keeping it outside if you want to see your Schefflera grow fast.

How Big Do Schefflera Plants Get?

Generally, you can expect an outdoor Schefflera plant to reach 30-40 feet in ideal conditions. Indoor Schefflera will stay smaller, usually closer to eight or ten feet, so location makes a difference.

If you have a Dwarf Schefflera, your plant will only reach about four feet once fully mature, which is perfect for indoor gardening.

How Much Sun Does Schefflera Need? 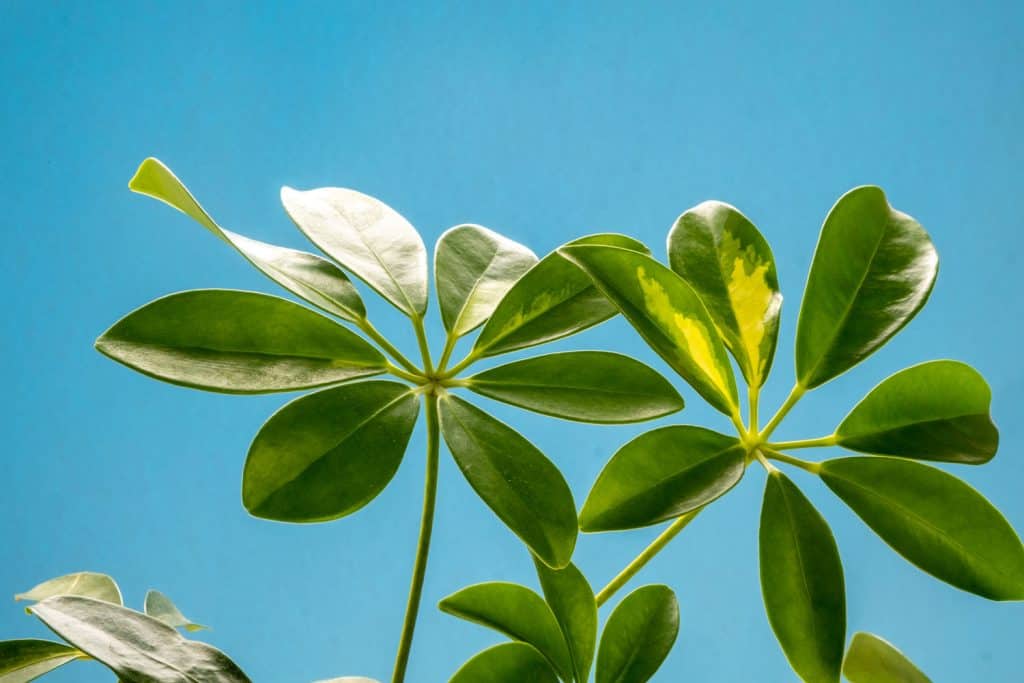 Schefflera are medium light plants, meaning they prefer bright light over direct sun exposure. Schefflera, in particular, do best out of the full sun during peak hours, although if you live somewhere that doesn't get too hot, your plant should be okay.

Generally, it's best to have a Schefflera be somewhere that gets direct sunlight for a few non-peak hours in the morning and then indirect light through the afternoon.

Although Schefflera will tolerate low light, don't expect your plant to grow very well. Schefflera will take on a leggy appearance if it doesn't get enough nutrients from the sun and can even become stunted altogether, which is why we don't recommend growing one in low light.

Especially for those wanting to keep their Schefflera inside, you want to make sure it is near a bright window to prevent stunting your plant.

Can Schefflera Live Outside In Winter?

As long as you have mild winters, you are safe to grow Schefflera outside. Like we mentioned, this plant species can live outdoors in USDA zones 10-12 year-round, including during winter.

That said, if the forecast predicts temperatures below 35 degrees, you might want to cover your plant until it warms up a bit. Considering Schefflera is a tropical species, the less winter weather it experiences, the better.

Will Schefflera Come Back After A Freeze?

If the weather drops to freezing temperatures, don't panic yet. Luckily, if your Schefflera is in good health, an occasional cold spell won't kill it, but it might send it into temporary shock.

Usually, this will result in wilted leaves and minor discoloration, which you can prune off after a few days if your plant still looks rough. If you can, try to relocate your Schefflera indoors during freezing weather or cover it with a plastic/thermal wrap to protect it.

This two-pack of reusable shrub covers protect against freezing. They have a drawstring closure and come in various bundle/size options.

How Often Should You Water Schefflera? 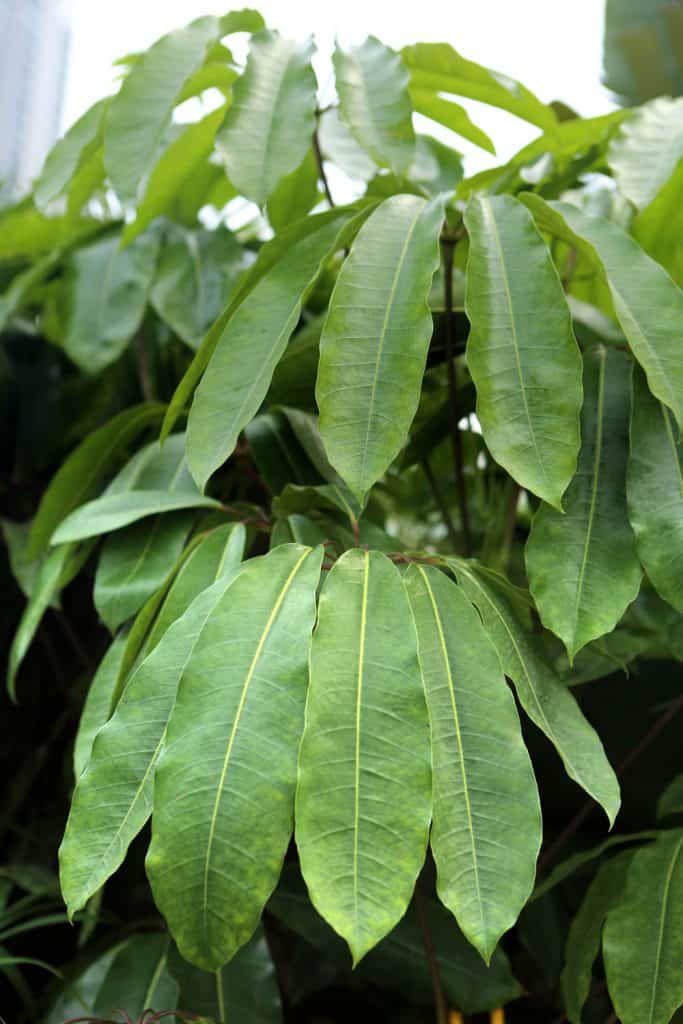 You want to water Schefflera every seven to ten days. Although these plants like to be in moist soil, overwatering yours can lead to root rot and even death.

A good way to test your Schefflera's soil is to feel around its base, and if the ground is super damp, hold off on further watering. Of course, if you live somewhere with drier conditions, you might need to adjust your watering schedule to be more frequent, so everyone will be different.

Typically, an overwatered Schefflera will have yellowing/browning leaves and start to droop down. You may also notice your plant lose its foliage if you overwater it, usually beginning with its newer growth.

Like we covered above, a Schefflera might even develop root rot from too much water, which can become deadly.

Why Is My Schefflera Plant Dying?

If you've noticed your Schefflera start to die, this could be for a few reasons. Some of the more common causes include:

Of this list, overwatering and insufficient sunlight are the usual culprits, so make sure to check your Schefflera's soil and sun exposure regularly. It's also a good idea to have your Schefflera treated for pests/diseases as soon as possible to prevent them from spreading to other plants in your garden.

Can You Save A Dying Schefflera?

Yes, you can save a dying Schefflera if you act fast. If you've overwatered, let your plant's soil dry out for a week or so and then gradually resume your watering schedule.

If your Schefflera isn't getting enough sunlight, you might want to consider relocating it to a brighter spot or pruning any trees/plants surrounding it. For pests and diseases, it's best to call a professional to assess the situation and treat your Schefflera with the appropriate products to prevent further damage.

How Often Should You Fertilize Schefflera? 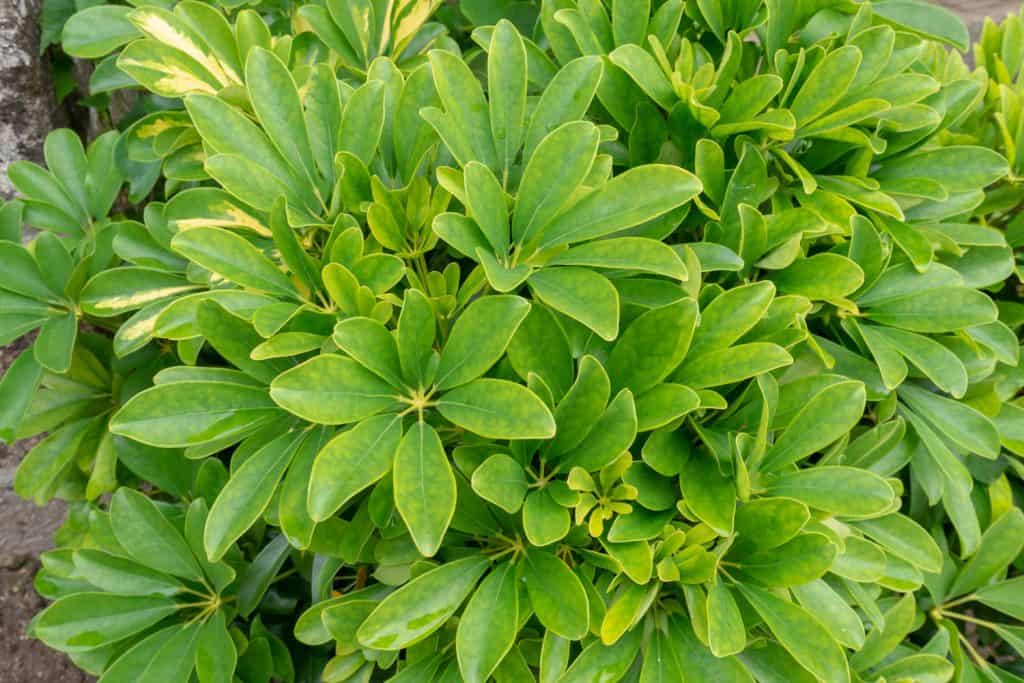 In general, it's best to fertilize Schefflera once to two times per month during the spring and summer. Especially for indoor plants, you want to make sure you fertilize Schefflera regularly between March and August to ensure it grows as much as possible before the fall and winter seasons.

Although Schefflera won't go into dormancy or lose all of its leaves, your plant won't grow at its regular rate when the weather is cooler, especially inside. That said, we recommend using a balanced (20-20-20) liquid fertilizer for your plant to prevent harming its roots and not fertilizing more than twice per month.

This fertilizer has a balanced formula, supplies powerful nutrients directly to your plant's roots, mixes with water, and comes in a 32-ounce container.

View this fertilizer on Amazon.

Do You Need To Prune Schefflera?

It isn't necessary to prune a Schefflera plant. Of course, you can trim your tree if you want to control its size, although we don't recommend doing this too often.

To prune a Schefflera, you want to cut off the ends of your plant's tallest stalks about an inch. To help with a Schefflera's width, cut back any branches you want shorter just before their leaf node to slow your plant's growth.

Whether you have a Schefflera growing in your garden or want to plant one, it's essential to know how long it will live. A Schefflera will usually stay alive between 20 and 25 years, although this depends on how well you care for it.

When it comes to growing Schefflera, you want to plant yours somewhere that gets plenty of indirect sunlight and in a location with moderate winters/year-round weather. It's also important to water Schefflera every seven to ten days, but not to the point its soil becomes soggy.

Regardless, make sure to act fast if your Schefflera starts to die, and don't forget to fertilize it one to two times per month through the spring and summer.

Be sure to check out these helpful related gardening posts below!

Why Is My Schefflera Losing Its Leaves?

How To Propagate Schefflera In Water

11 Indoor Trees That Are Hard To Kill