Once you've got your cucumber plant growing well and bearing fruits, you'll want to know how long it will produce to plan your harvest and replanting time. So how long does a cucumber plant last before it naturally withers? Here's what we found out from plant experts.

The plant's lifespan depends on the particular cucumber variety you are growing. Most cucumber varieties will remain productive for 1 year before starting to wither shortly after producing fruits.

Would you like to learn more about cucumber plant varieties and how much they can produce per season? Read on as we discuss the best time to plant and harvest cucumbers and how you can get them to produce more fruits. 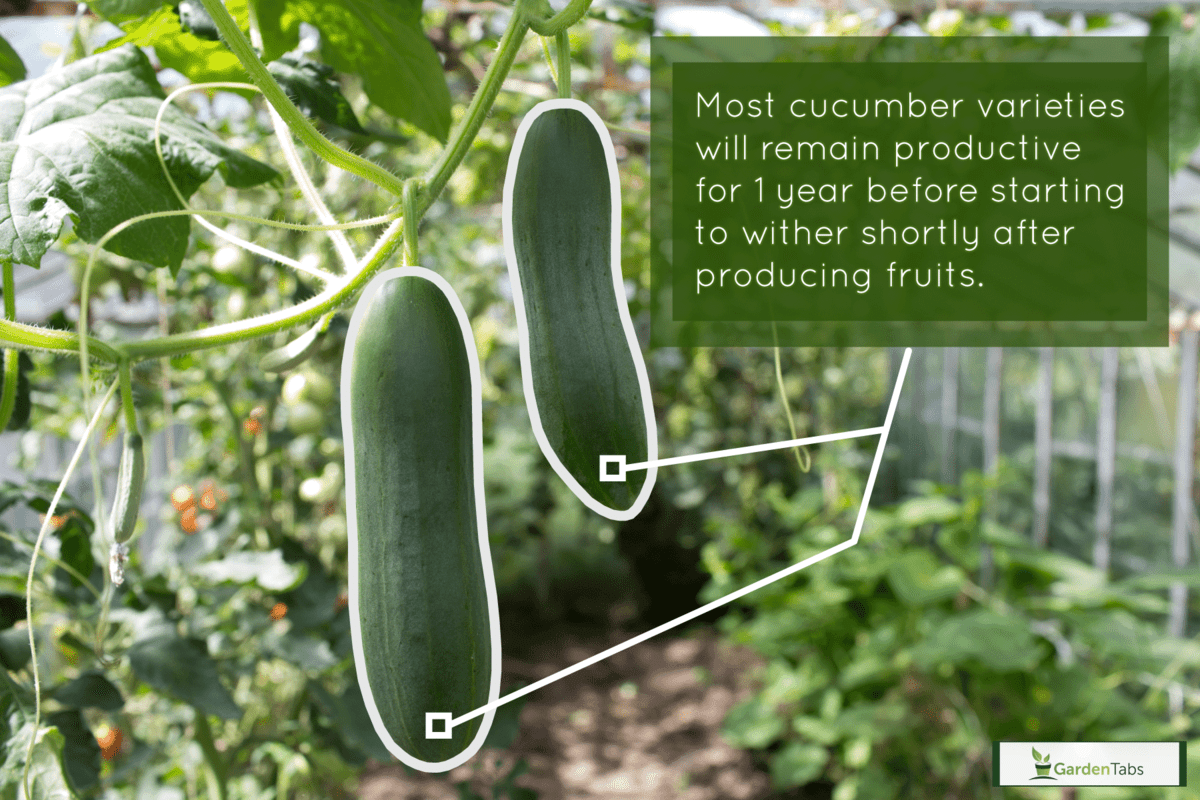 How Long Will A Cucumber Plant Produce?

Cucumbers are a great vegetable to have in your garden. They're easy to grow, and they produce a lot of fruits. Plus, cucumbers are an excellent source of vitamins A, C, and K. 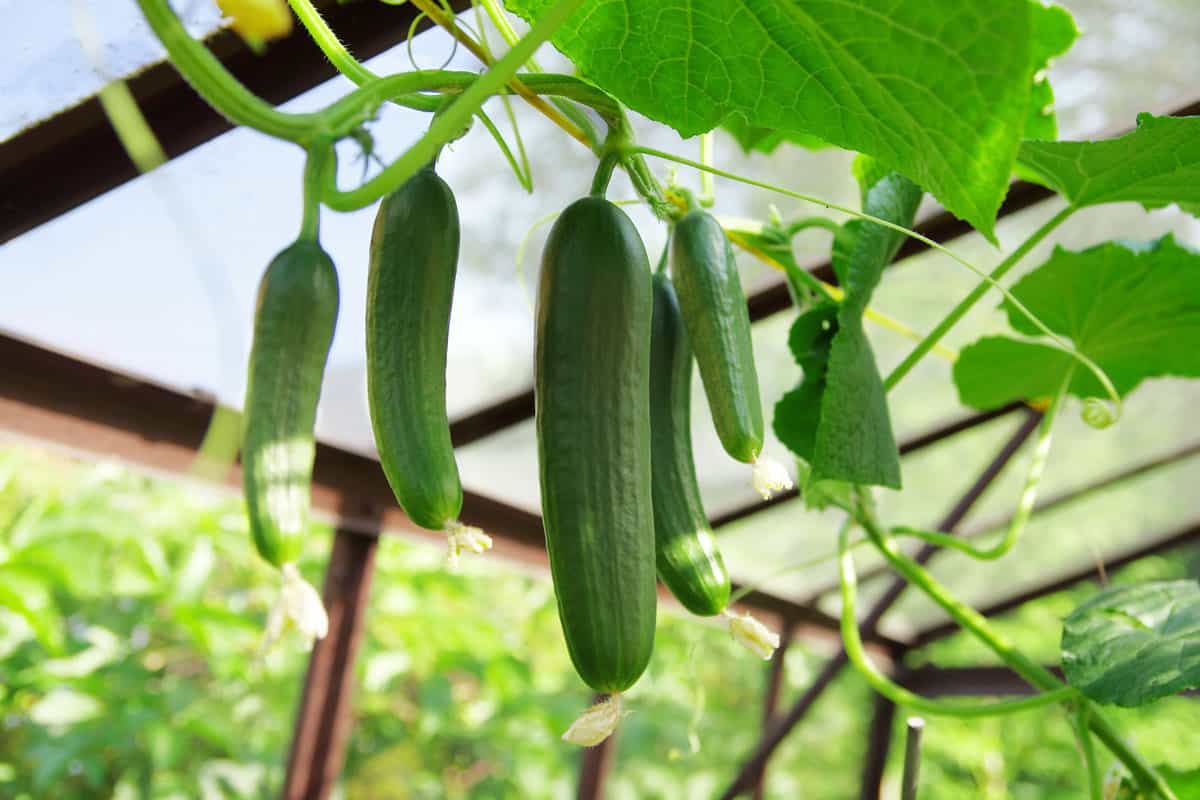 If you're growing cucumbers in your garden, you might wonder how long your plants will last. Unfortunately, the answer is not very long. Once your cucumber plant reaches maturity, it will stop producing new fruits, and the plant will wither shortly after that.

What does plant maturity mean? This is the period starting from the seed planting until it starts producing flowers and fruits. Once the cucumber plant matures, it will begin to grow fruits, and then the plant will eventually die.

Generally, a cucumber will mature between 50 to 75 days, depending on the variety. Take note that there are more than 100 cucumber varieties worldwide, each producing differently.

Let's look at the lifespan of some of the most common varieties that are easy to grow, even in a home garden.

The bush pickle, or the bush crop, is the perfect pickling cucumbers because the fruits are shorter and have thinner skin. It does not vine out like other varieties but grows like a bush, so it's perfect for container gardening.

The plant matures after only around 48-50 days from planting. It will bloom and produce during summer, and the plant will wither after that.

Get your GMO-free Bush Pickle cucumber seeds on Amazon.

This cucumber plant got its name from having a straight body about eight inches long. Straight eight cucumbers grow in a vine, so it's best to let them crawl on a trellis in an area where they can get lots of sunlight. The best time to plant them is during spring or summer.

Straight eights mature at 50 to 75 days after planting. It is an annual plant that needs replanting and regrowing after it produces and withers.

Get your Straight Eight cucumber seeds on Amazon.

Marketer cucumbers are nine-inch long, deep green colored fruits that are popular for salads. It has an annual life cycle and takes 55 days to mature. Like the straight eight, this plant is a crawling vine best grown on a trellis.

This plant is very hardy and can withstand long periods without water. A marketer cucumber will produce for about two months before it begins to wither.

Check out these Marketer cucumber seeds on Amazon.

The national pickling cucumber is a hybrid cucumber used in many different types of pickles and is also used as a snack and in salads. These cucumbers require at least two to three months (around 60 days) to mature after they have been planted in the ground or container.

National pickling cucumber does best in full sun and well-drained soil. It is resistant to most pests and diseases, so it's an ideal choice for home gardeners who want a reliable crop.

Get these National Pickling cucumber seeds on Amazon.

Will Cucumber Plants Produce All Summer?

Summertime is the bloom time and the best time to harvest the majority of cucumber varieties, including some of the varieties mentioned above, such as the bush pickle and straight eight. Cucumbers thrive in full sunlight and are sensitive to frost and extreme temperature changes.

The amount of time a cucumber plant will produce depends on several factors. The first factor is whether or not you've planted a suitable variety of cucumber for your area. Some varieties are more cold-hardy than others, and some are more resistant to disease than others.

The second factor is how much care and attention you give your plants throughout the growing season. They should produce for longer if you watch them closely and keep them healthy.

The biggest problem you will face when it comes to growing cucumbers is pest management, especially during summer. They are prone to aphids, leaf miners, beetles, mites, and many others. Organic pesticides and a good crop rotation are a great solutions to increase the yield during summer.

How Many Cucumbers Can You Get In One Plant?

Each cucumber plant will produce about 10 to 15 fruits, depending on the variety. The bigger and longer cucumber varieties tend to produce less, while the shorter varieties produce more. Some hybrid varieties will produce even less, around six fruits per plant.

Cucumbers are one of the easiest vegetables to grow, but they can be tricky to harvest. You want to be sure that you pick them at the peak of ripeness so that you get maximum flavor and nutrients from your crop.

When growing cucumbers, you want to harvest them when they're still green and firm. If you leave them on the vine too long, their color will become yellowish-green, and the seeds will mature.

Additionally, the more you harvest from the plant, the tendency is to produce more fruits. Letting a fruit mature in the plant prevents the production of a new set of fruits.

What Month Do You Harvest Cucumbers?

Cucumber plants love warm weather and lots of sunshine. So it's only fitting to plant them after the cold season, once the temperature starts to warm up. If you plant them too early, they will likely die due to frost damage.

Ideally, planting should be around springtime during the months of March or April. The cucumber will mature in about 50 to 75 days, just in time for the summer's harvest, around mid-June to mid-July. It's best to harvest them before the weather gets too hot.

The best months for harvesting cucumbers are June through August. They are ready for harvesting when they turn yellowish-green, and their skin becomes bumpy.

Planting cucumbers, however, should not be limited only to these months. With proper care and planning, you can plant cucumbers all year round, especially if you live in a place with generally warm seasons.

How Do I Know When My Cucumber Plant Is Done Producing? 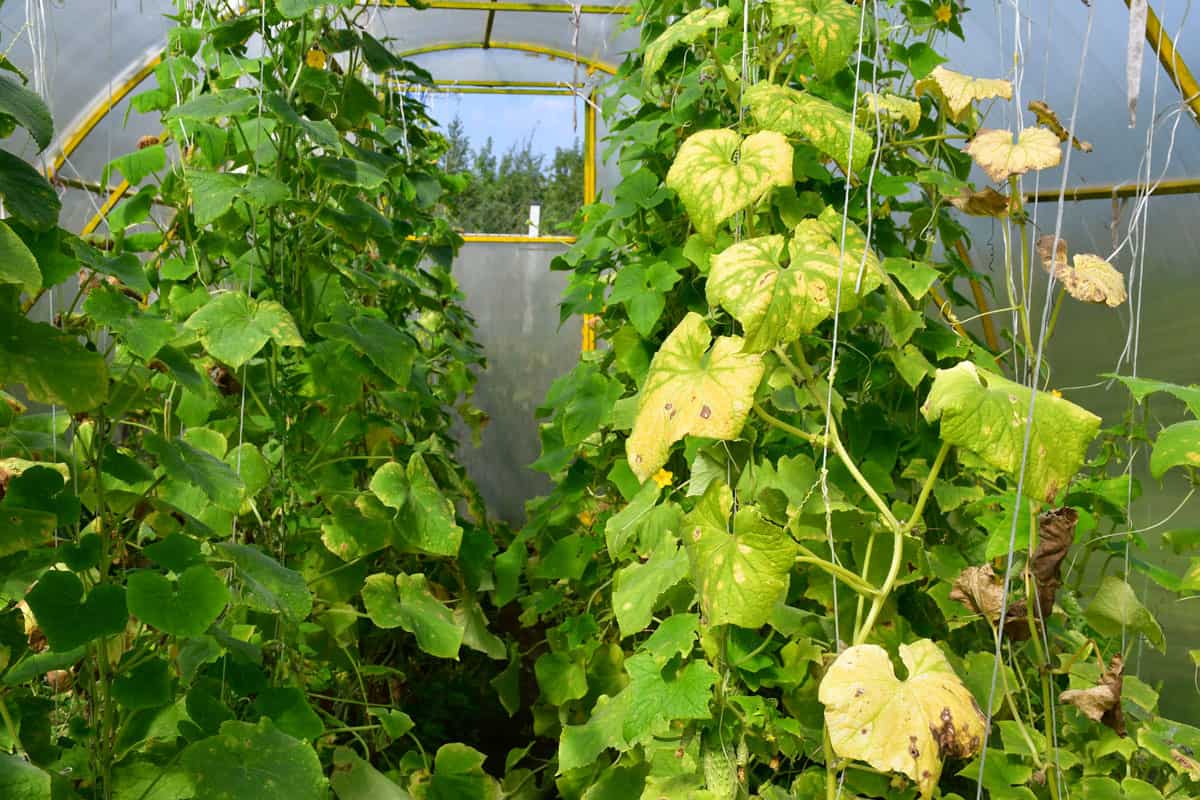 If your cucumber plant is more than 75 days and you have already made several harvests from it, then you should expect it to start declining at any given time. If the leaves on your cucumber plant are yellowing, turning brown, and falling off, that's a sign that the plant is in decline.

Another good sign that your cucumber plant will wither is if it stops producing fruit altogether. Cucumbers need nourishment and fertilizers throughout their growing season. If they stop producing fruits, this could indicate that they're not getting enough nutrients from the soil. You can prevent this by adding fertilizer every week or two during the growing season.

If your cucumber plant hasn't reached maturity and it starts showing signs of withering, it could be a problem with either pests or lack of nourishment. Here's what you can do: 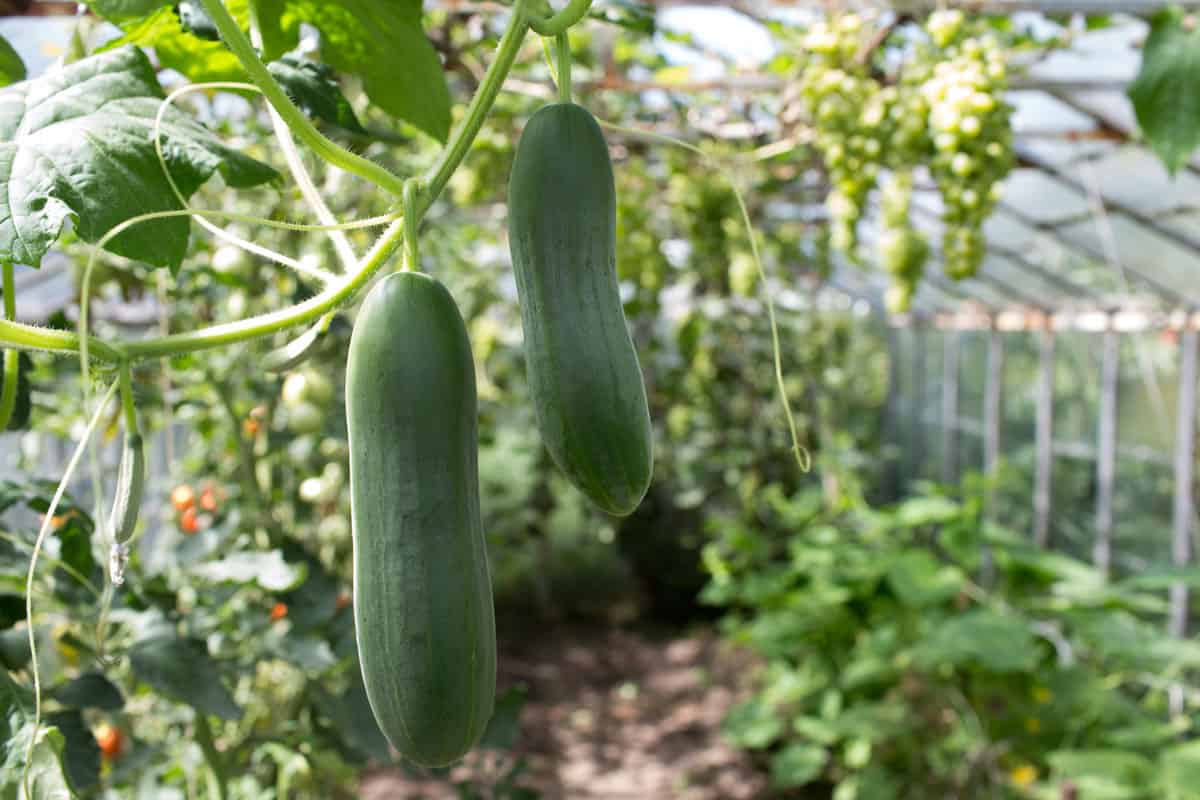 Cucumbers are annual plants and will only live until their maturity and wither after it has produced enough fruits. If you want to enjoy a fresh harvest of cucumbers all year round, you can plant them monthly to have steady growth and harvest every 50 to 75 days.

Thank you very much for reading through. If you want to know more about cucumbers and growing climbing plants, you can get a lot of helpful information from these articles below:

Can Cucumbers Be Grown In Pots?